Indian Qualifier for the Meltwater Champions Chess Tour started with a bang. While Adhiban, Praggnanandhaa, Aravindh and Ganguly had a smooth sailing towards the Quarter-Finals, the favorites on the other side of bracket Nihal, Sethuraman, Abhijeet and Sasikiran were surprised by their opponents and got eliminated from the tournament. Ganguly scored two fantastic victories against Visakh with the black pieces. One cannot overlook the triumphs of Harsha, Gukesh and Mitrabha who proved to be the better players than their respective opponents on the very same day. Quarter-Finals will have interesting battles between Adhiban-Praggnanandhaa, Aravindh-Ganguly, Arjun-Harsha and Gukesh-Mitrabha starting from 3 p.m. IST today 8th May 2021. Photo: Shahid Ahmed

The biggest upset in the Round of 16 was IM Mitrabha Guha eliminating GM Krishnan Sasikiran with a 1.5-2.5 win. Mitrabha started the match with a win. After a draw and suffering a loss, in the fourth game also, he fought back from a difficult position to win the match and setup a clash with Gukesh in the Quarter-Finals. Gukesh also played fantastic against Abhijeet as he took only three games to eliminate Mr. Commonwealth. Harsha Bharathakoti played the maximum number of games to eliminate Sethuraman with a 4-2 victory. One of the tournament favorites Nihal Sarin was eliminated by Arjun Erigaisi 1.5-2.5 as the latter got his revenge from the Super Juniors Cup finals.

Aronyak started well in the first game and got an interesting position. 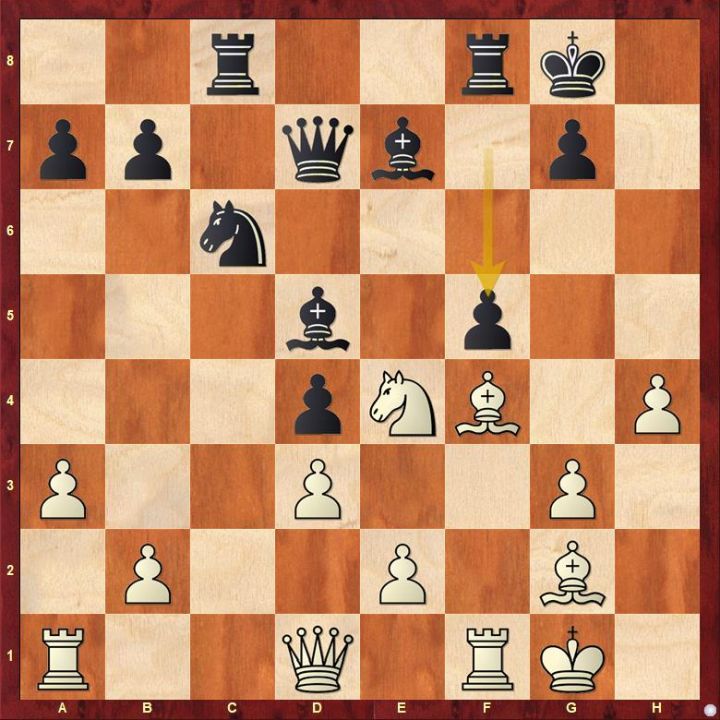 White played 21.Nd2 in the game, however 21.Nd6 leads to some interesting continuation. Of course white knew that Adhiban will be able to handle all kinds of complications and perhaps him having less time on the clock led to the choice of a safer continuation. Even in the final position white was better but he ran out of time as he suffered a sudden power cut.

In the second game, Aronyak tried to create some chances early in the opening but it did not yield much. 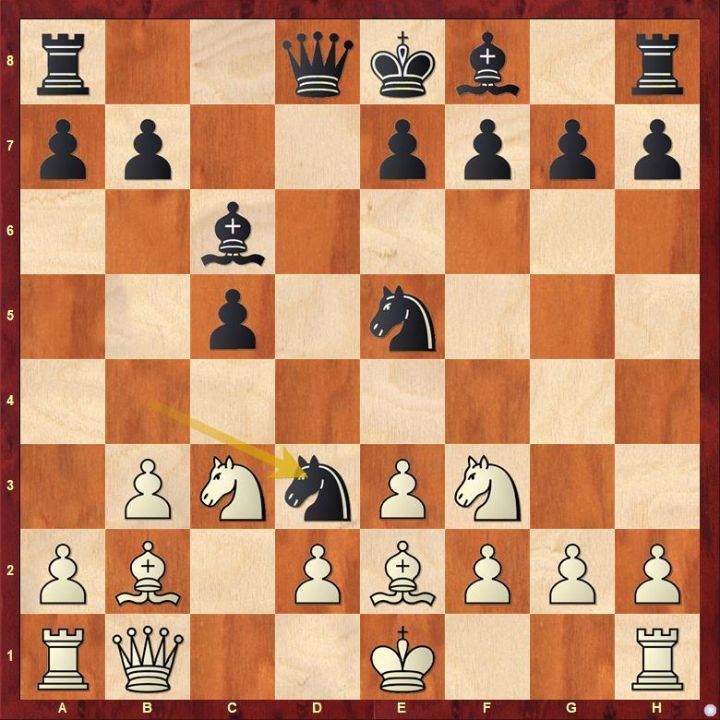 Adhiban continued with 11.Kf1 Nxf3 12.Qxd3 Nh4 13.f3 and he managed to turn things in his favor without much difficulty and eventually went on to win the game, taking a 0-2 lead.

Aronyak made a solid draw in the third game. Adhiban had his chances in the game, since a draw was enough for him to advance to the Quarter-Finals, he did not need to push the hard. Thus Adhiban won the match 0.5-2.5 and advanced to the next round.

First game was a well fought draw where neither side made any significant mistake. In the second game, Karthikeyan went wrong early in the opening which cost him a pawn. 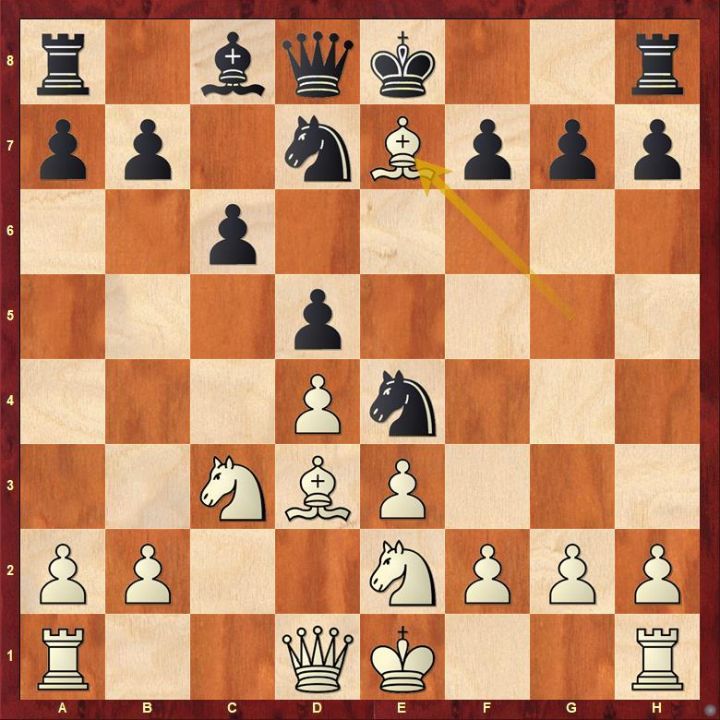 Black cannot recapture at e7 as that drops a pawn and that is exactly what was played in the game 9...Qxe7. For the rest of the game, black had to play catch up as he did not get enough compensation for the lost pawn. However the game ended up in a tricky way. 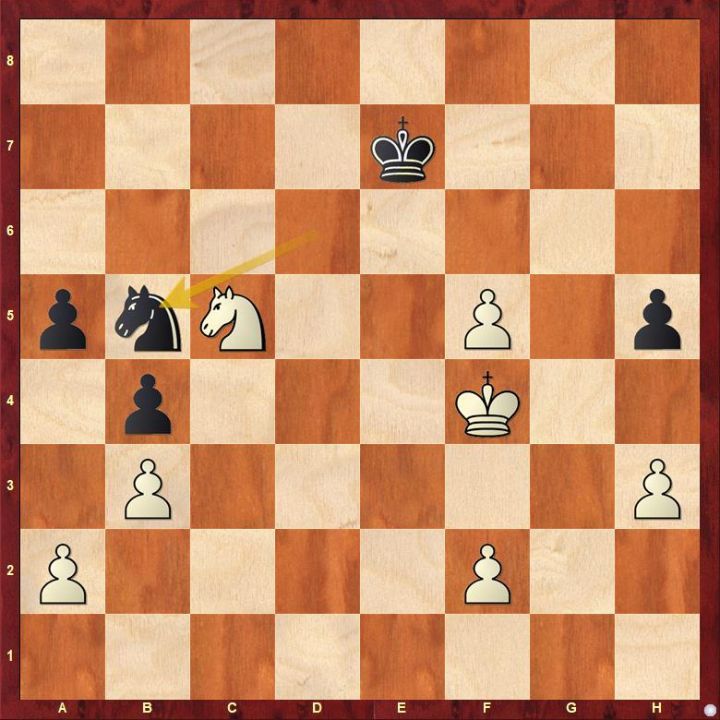 Praggnanandhaa was completely winning but due to technical glitch, he ran out of time. The game was adjudged a draw.

The third game was also another hard fought draw. Karthikeyan tried to create some chances in the fourth rapid game, but the position being cramped up for him did not help his case. 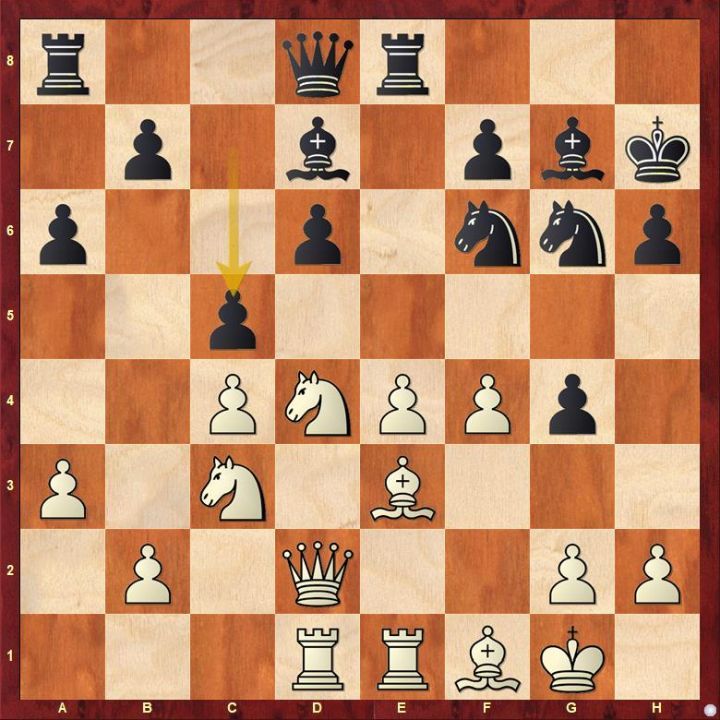 Not a lot was going in black's way and 18...c5 certainly did not improve his position. Praggnanandhaa converted his advantage into a win with ease and won the match 1.5-2.5 to advance to the Quarter-Finals where he will face Adhiban.

First game did not yield a result as it was a well-fought draw. Harika made a tactical inaccuracy in the second game which allowed Aravindh to gain a bishop pair and gain complete command of the position. 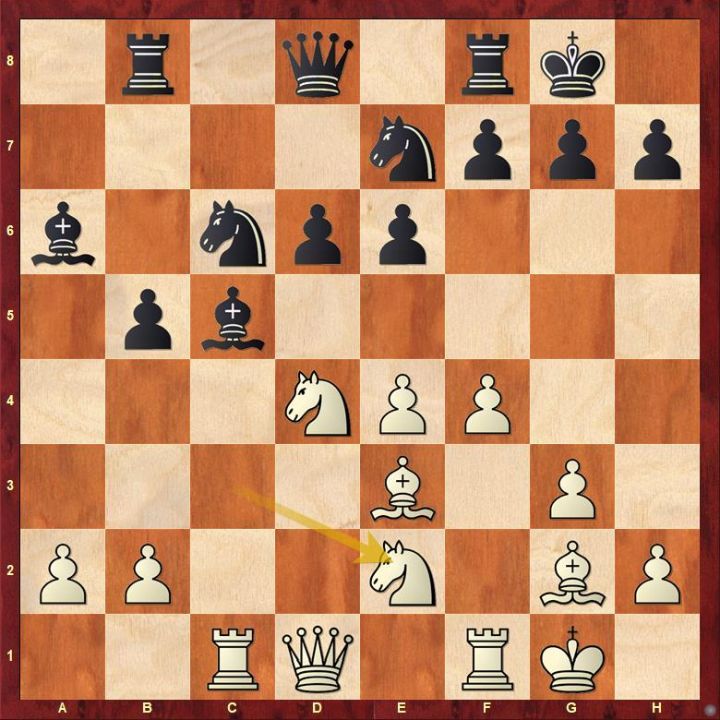 Find out why 15.Nce2 is not the best move in the position and what white could have played instead. Eventually black liquidated into a winning opposite color bishop endgame and won the game taking 1.5-0.5 lead. 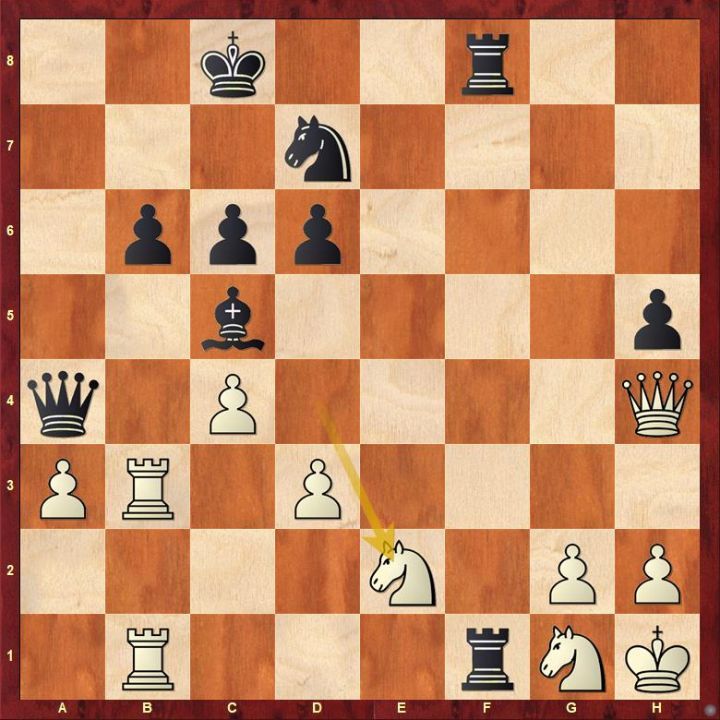 White needed to play 35.Ne6 which was a difficult variation to spot especially when the clock is ticking down to last few seconds in a must-win game. 35.Nde2 completely turned things into black's favor. Find out winning continuation for black in the above diagram. Aravindh won the game and the match by 3-1 to advance to the next stage.

First game was a quick 21-move draw by repetition.  In the second game, Ganguly made an interesting sacrifice which  was quite difficult to defend for a human. 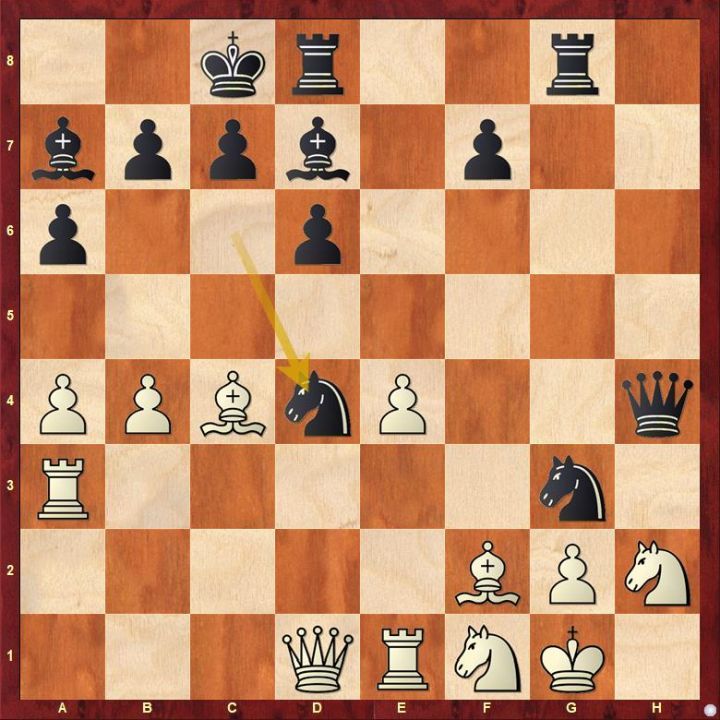 21...Nxd4 leads to some very interesting and complicated lines, perfect for a rapid game. White can defend it but with precise calculation. Can you find it? The game continued with 22.Rxg3 Rxg3 23.Nxg3 Qxg3 and black eventually arrived at a winning endgame. With this win, Ganguly took 1.5-0.5 lead.

Visakh immediately struck back in the next game after Ganguly blundered in a seemingly equal rook and few pawns endgame. 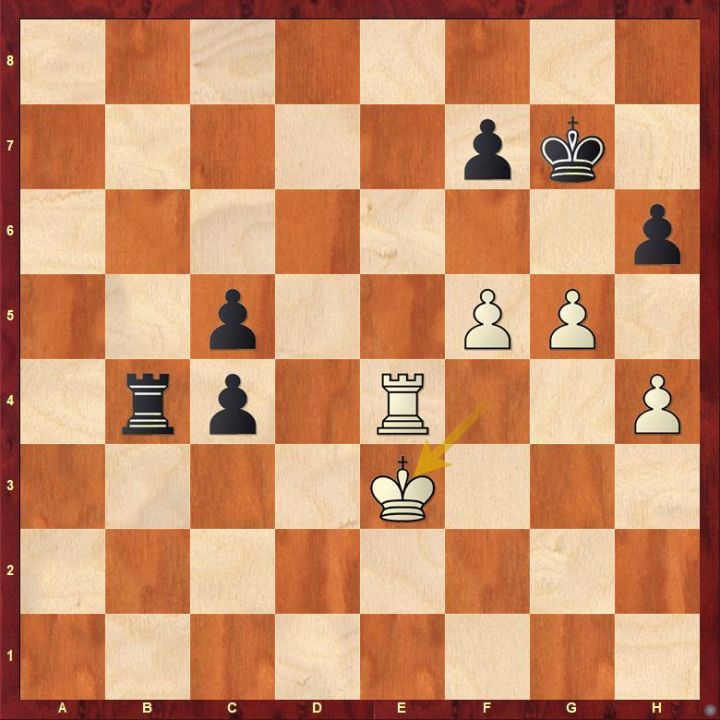 42.Ke3 is a game losing blunder for white. Find out what white should have played to maintain equilibrium. With this win, Visakh levelled the score 1.5-1.5

Ganguly once again played displayed a fantastic attack which amplified by Visakh's misjudgment. 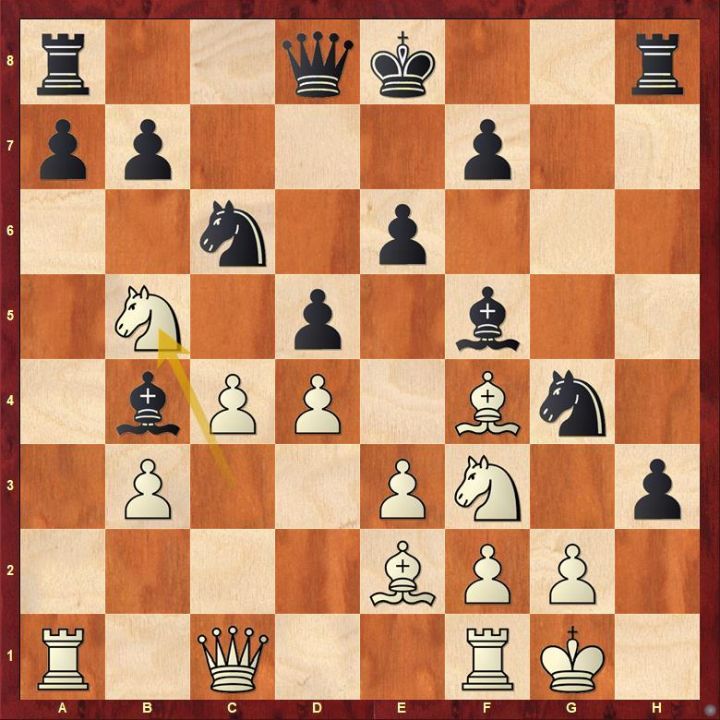 White needed to play 20.g3 to thwart black's attempt of wrecking his kingside. 20.Nb5 only helped black to damage it with 20...hxg2. Rest was just a matter which black converted without any difficulty. Ganguly won the match by 2.5-1.5 to advance to the Quarter-Finals where he will face Aravindh Chithambaram.

Nihal made a dubious sacrifice in the first game which allowed black to launch an onslaught and gain huge positional advantage. 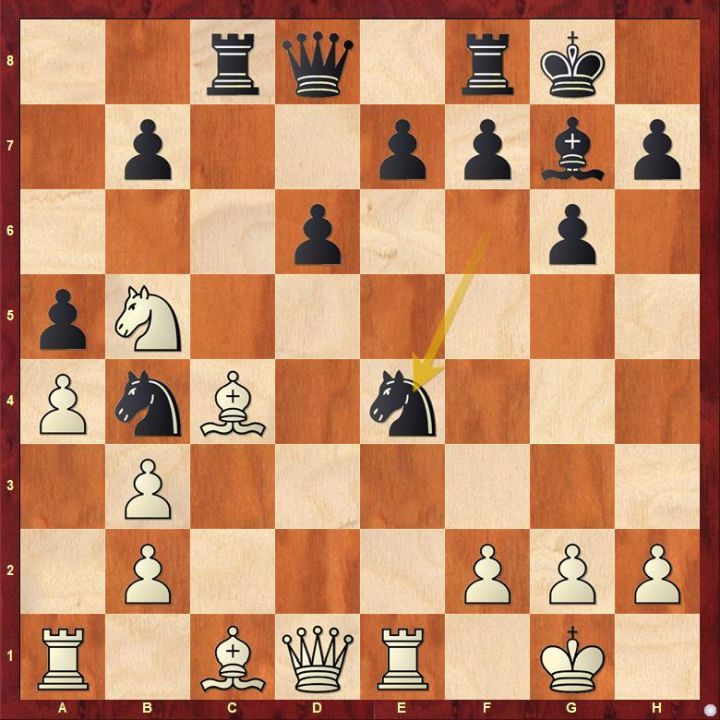 White needs to take on e4 with the rook to make sure the d-pawn does not become menacing but 15.Bxf7+ only helped black as the f-file opened and black capitalized on it with the obvious 15...Rxf7. Eventually black liquidated into a winning rook, knight and few pawns endgame. Arjun scored the first win of the match and took 0-1 lead. 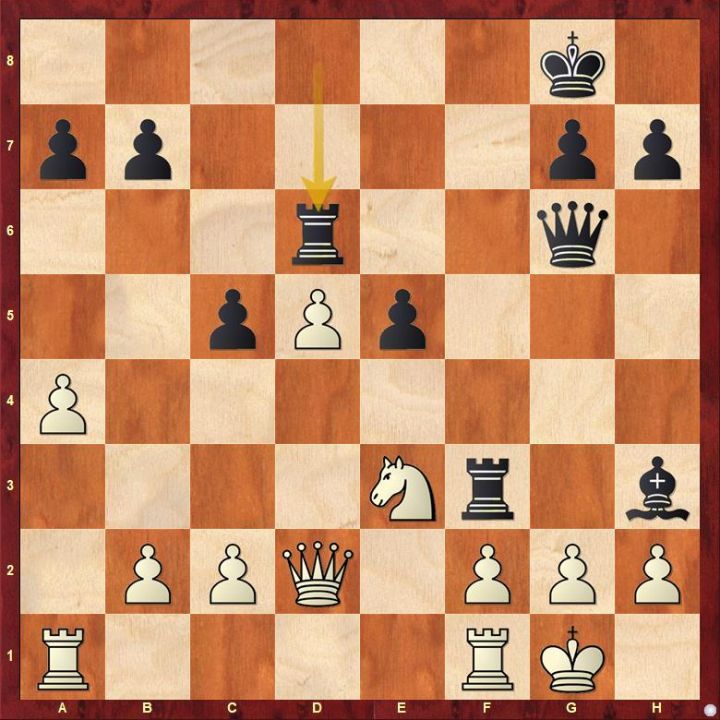 Nihal tried with all his might to score a victory but Arjun's staunch defence made sure that he remains undefeated in their match. It is hard to believe that white is absolutely fine after 19...Rd6. In fact, white is winning as per the computer. With this draw, Arjun won the match 1.5-2.5 and advanced to the next stage.

Sethuraman had a good opportunity against Harsha in the very first game but he was unable to seize it. 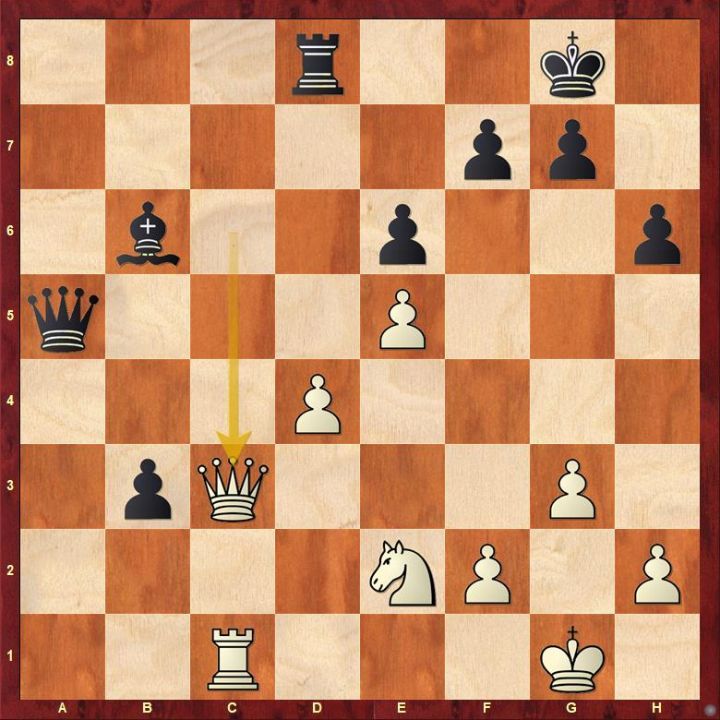 The game continued with 33...Qd5 which is not the best way to protect the b3-pawn. What was the better way? It eventually liquidated into a drawn rook endgame.

After defending his opponent's attack quite well, it was time for Harsha to launch an attack of his own. 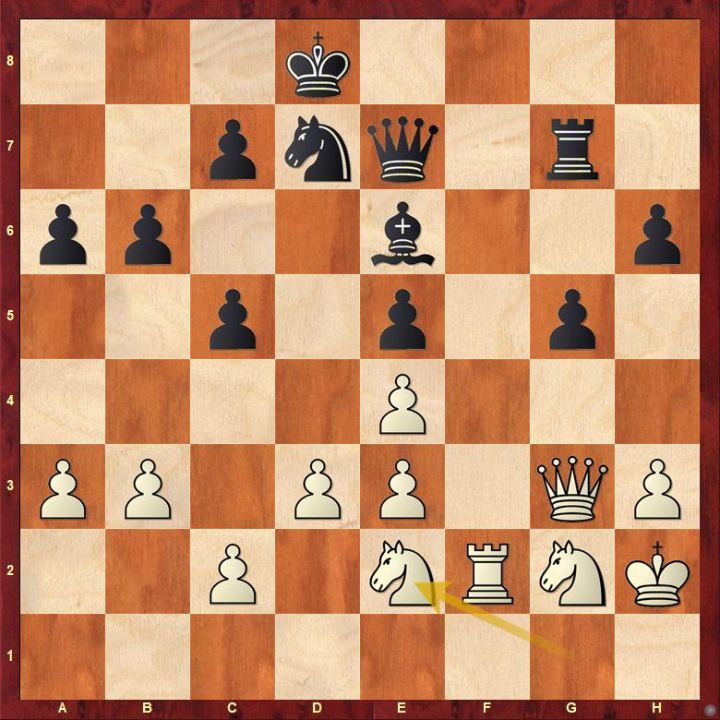 White's pieces are all cramped up and it's time for black to launch a devastating attack. How? Harsha won the game in another eleven moves and took 1.5-0.5 lead.

Third game was a well-fought draw which means Harsha was still in the lead 2-1. Sethuraman won a must-win game in the fourth game to level the score 2-2 and force blitz tie-breaks.

In the first blitz game, Sethuraman made a tactical error in a seemingly equal position which completely turned things into Harsha's favor. 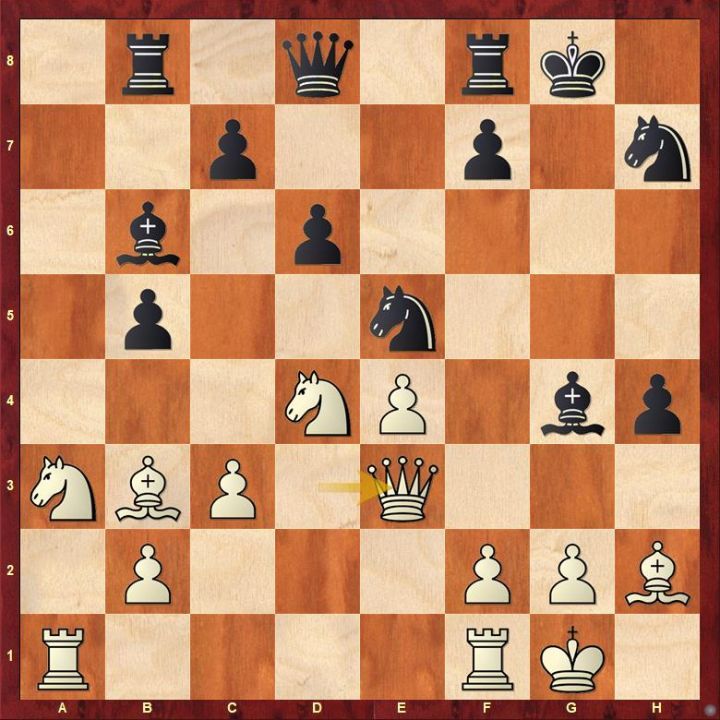 21.Qe3 is a mistake. Find out why. White needed to play 21.Qd2 and things would have been fine for white. Harsha being tactically alert, seized the opportunity and converted it into a victory in another nine moves. Thus Harsha took 3-2 lead in the match.

Sethuraman was once again in a must-win situation to force Armageddon. He pushed too hard and lost the game. 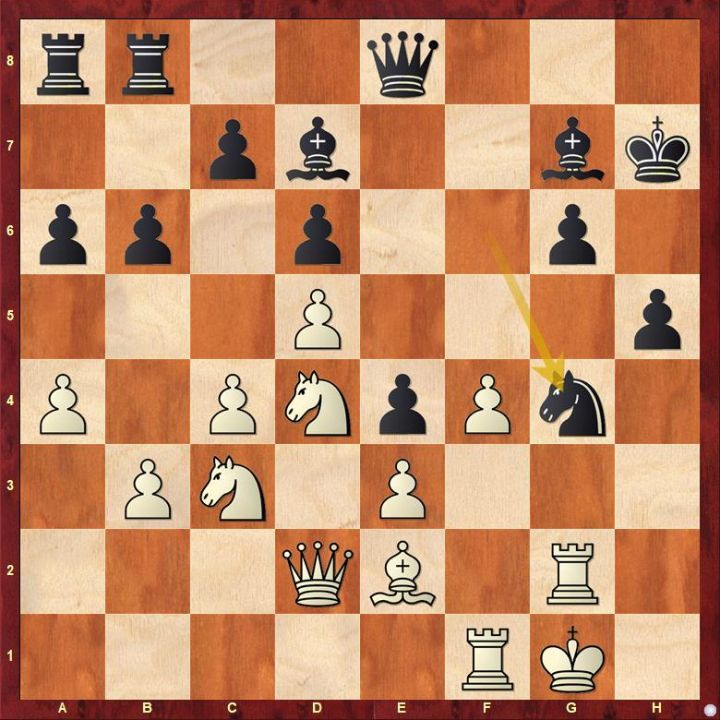 27...Nxg4 helps white only as after 28.Bxg4 Bxg4 29.Rxg4 hxg4 30.Ne6 white is in firm control of the position. With this win Harsha won the match by 4-2 and setup a clash with Arjun Erigaisi in the Quarter-Finals.

First game was a well contested draw. However, Abhijeet had a chance in the endgame.

Abhijeet had a tactical oversight and blundered a piece in the third game. 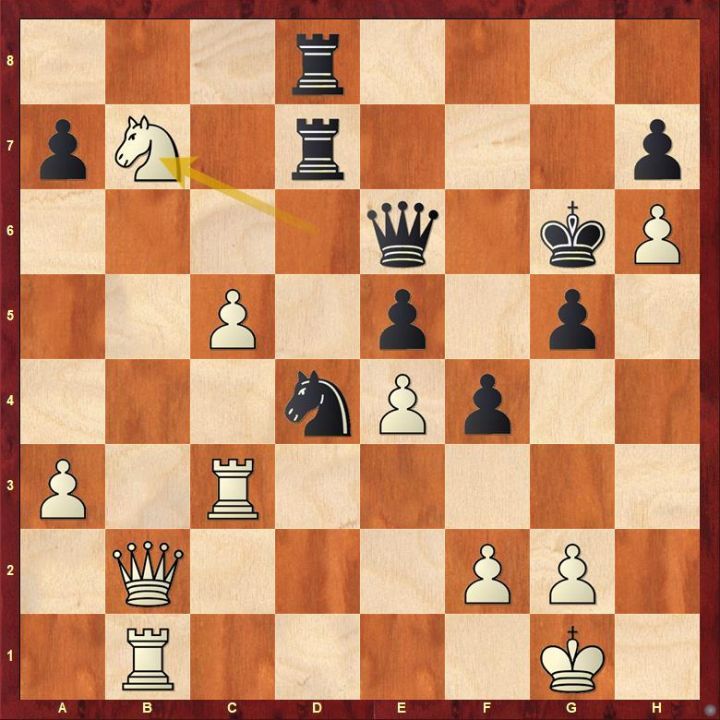 In an already difficult position, 46.Nxb7 only accelerated things in black's favor. Gukesh won the game and the match by 0.5-2.5 to advance to the next stage.

In a seemingly equal position, Sasikiran made an inaccuracy which allowed Mitrabha's kingside pawns to roll down the board freely. 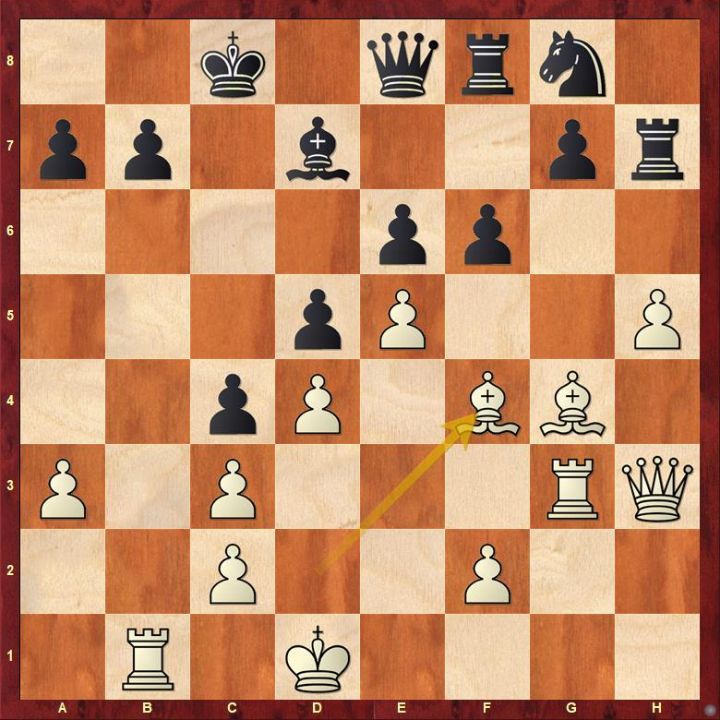 28.Bf4 is a mistake. Find out why. White lost a pawn and soon he sacrificed a bishop to free up his position but it was not enough and eventually lost the game. Mitrabha took 0-1 lead.

The second game was a well-fought draw which ended in a repetition. Mitrabha maintained his lead with 0.5-1.5. Sasikiran used his wealth of experience to win the third game and level the score 1.5-1.5 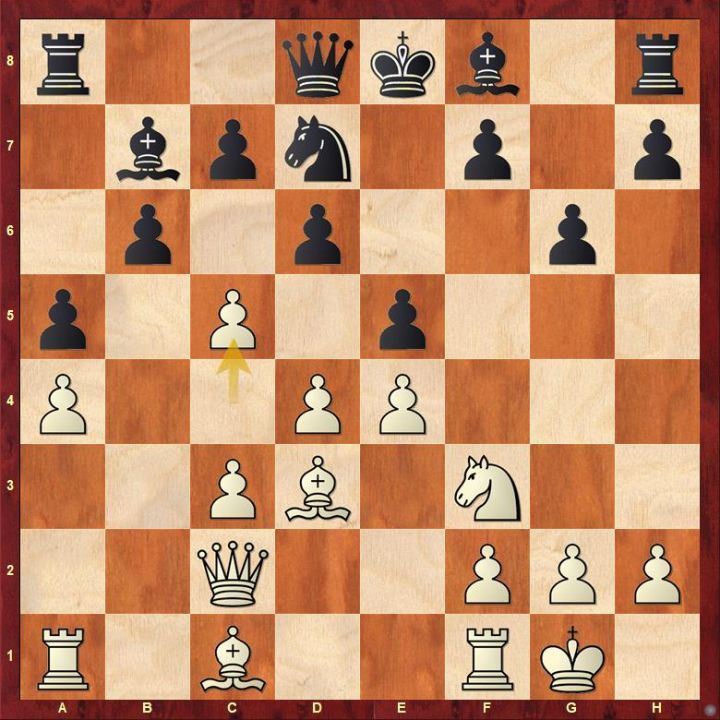 What is the best way to respond to 11.c5 ? Black opted 11...Bg7 and soon afterwards the position crumbled away.

Despite being down by pawn, Mitrabha played bravely in the endgame. 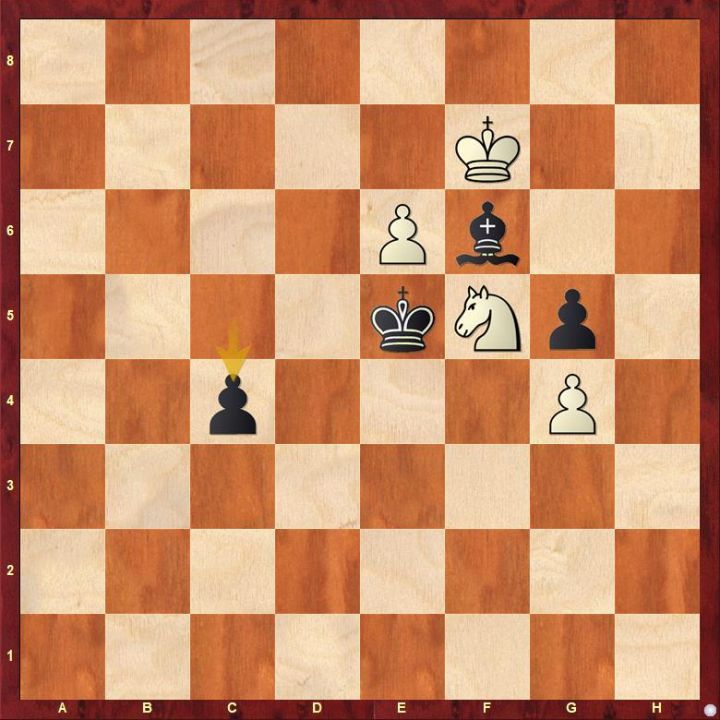 Black could have saved the game with 63...Bd8 but 63...c4 only helps white to push for a victory. Try to calculate the entire winning plan for white in the above diagram.