World champion Carlsen completely dominated former World Rapid champion Dubov as he won the first set 2.5-0.5 in the Quarter-Finals of Meltwater Champions Chess Tour Opera Euro Rapid. Vachier-Lagrave and So are the other two players who have won their respective first sets. That means Dubov, Aronian and Duda must win the second set tonight to keep their Semi-Final hopes alive. Quarter-Finals will continue tonight from 9:30 p.m. IST. Catch the live stream with IM Sagar Shah and Amruta Mokal on our youtube channel. Photo: chess24 Live stream

Dubov, Aronian and Duda in a must-win situation

Carlsen made a short work of his teammate Dubov as he took only three games to win the first set. It did not seem like Dubov got an opportunity to be in his zone in any of the three games. Vachier-Lagrave is back in his form and he played fantastic to beat Aronian 2.5-1.5 and remained undefeated throughout the day. So-Duda battle was the most exciting one as there were three decisive games, including a very interesting Queen vs three minor pieces in their second game of the day. So won the first set 2.5-1.5. Radjabov-Giri seemed like a battle of equals as after making two draws, Radjabov scored the first victory which Giri equalized by winning the next game. Their first set is tied at 2-2.

In an already difficult position, Dubov made an inaccuracy which caused further irreparable damage to his position. 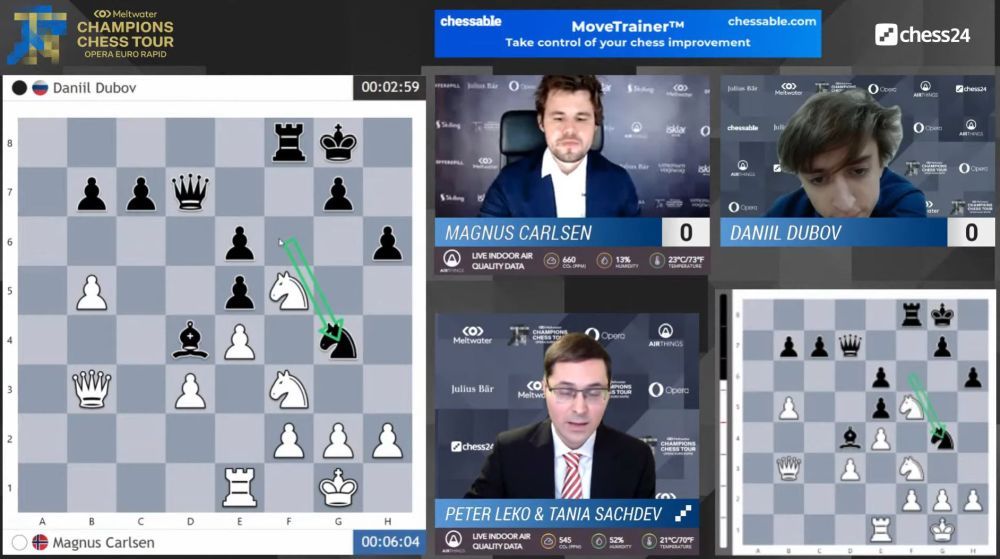 Black could have gone with 22...Nh5 instead. The difference is the knight can no longer pushed to the corner with the threat of a trap. Soon black had to sacrifice an exchange and eventually lose the game.

The second game between Dubov and Carlsen ended up in a draw. However it had some interesting moments. 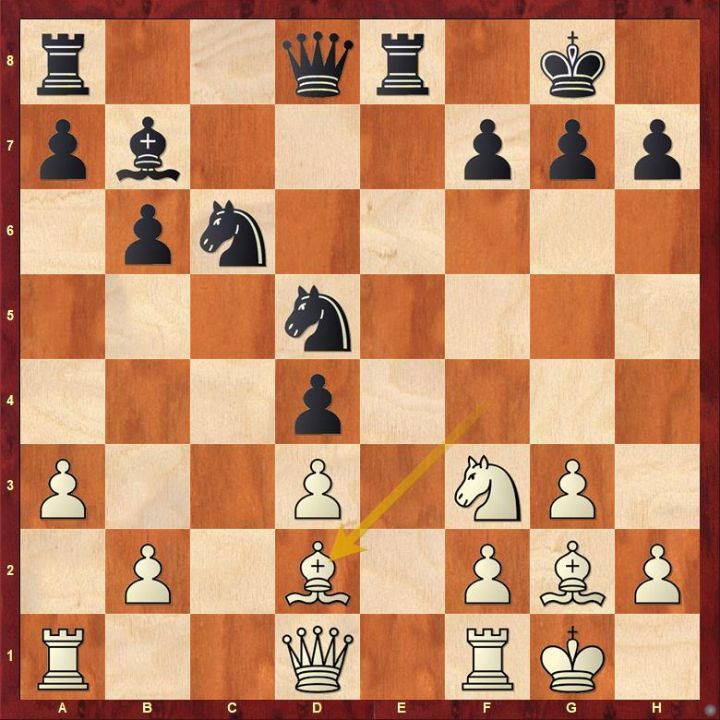 The position is roughly equal, although black's pieces look more cramped. Can you think like Carlsen after 18.Bd2 ? The game eventually petered out to a draw.

Carlsen completely outplayed Dubov with his positional play in the third game. Thus he won the first set. 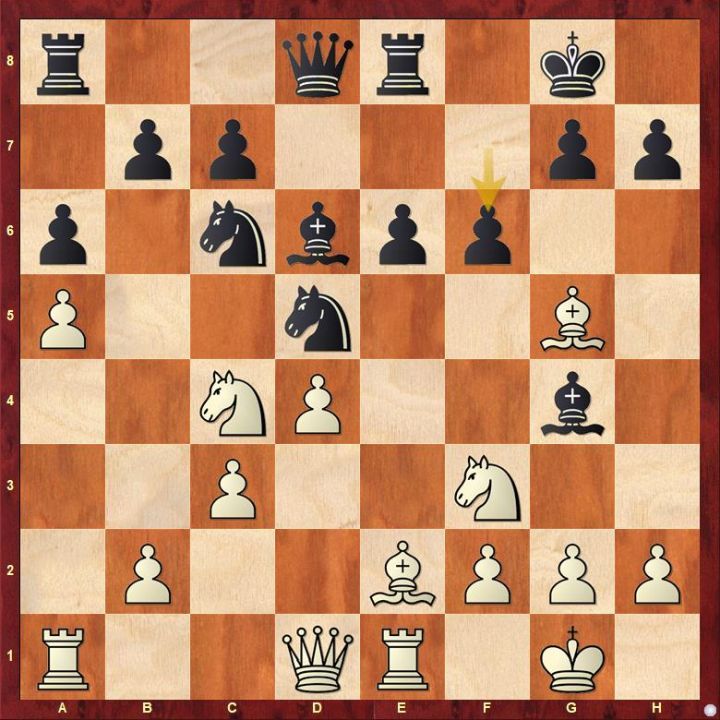 Dubov did not make one big mistake which cost him the game. It's the small mistakes which slowly fragmented his position into smithereens. One of the first one was 15...f6. If black was getting an e5 break then f6 would have made a lot of sense, but it didn't.

Vachier-Lagrave had a great advantage in the endgame against Aronian. However he did not protect his passed pawns correctly and the game drifted into a draw. 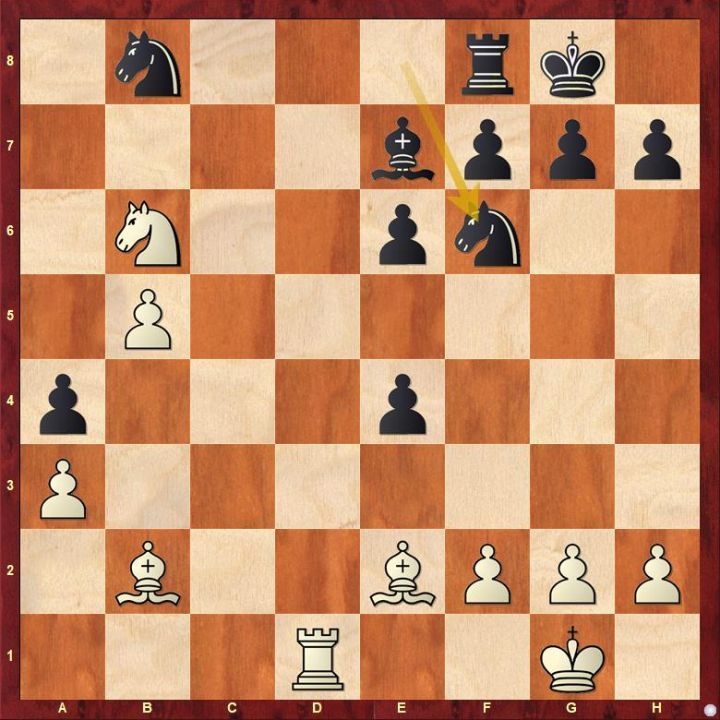 Instead of taking the a4-pawn right away, white can delay the capture because there is no way for black to defend it and black is having some difficulty in developing his b8-knight.

Aronian went wrong early in the opening against Vachier-Lagrave in their second game. 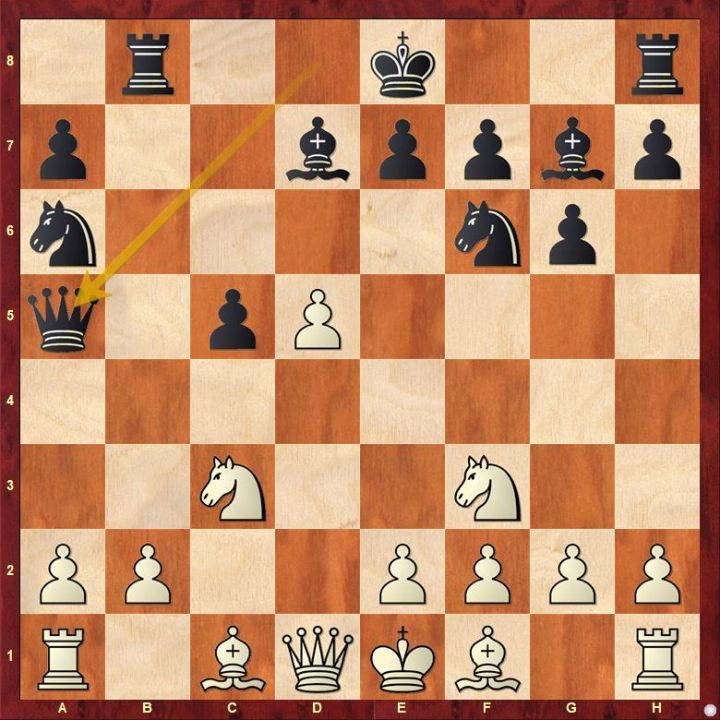 What is the best way for white to thwart black's threats along the a5-e1 diagonal? The game went on with 13.Qd2 which was not a good idea. Find out why. 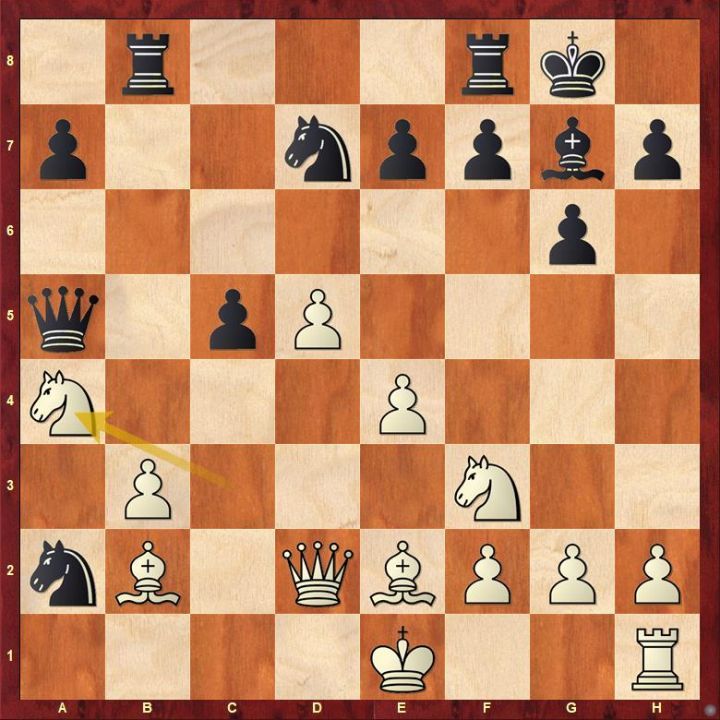 Black is completely winning here. What should black do after 21.Na4 ?

Aronian got an opportunity to seize the initiative in the third game against Vachier-Lagrave. 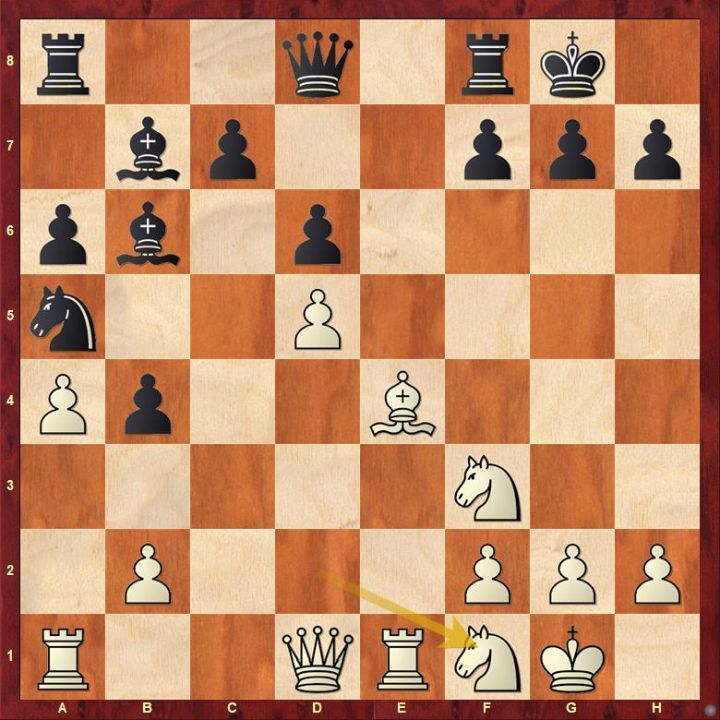 17...f5 or g6 seems more apt than 17...Qf6. Black's advantage slowly dwindled and the game liquidated into an infallible opposite color bishop endgame which ended up in a draw.

Duda handled So's initial surge of attack on the kingside quite well. 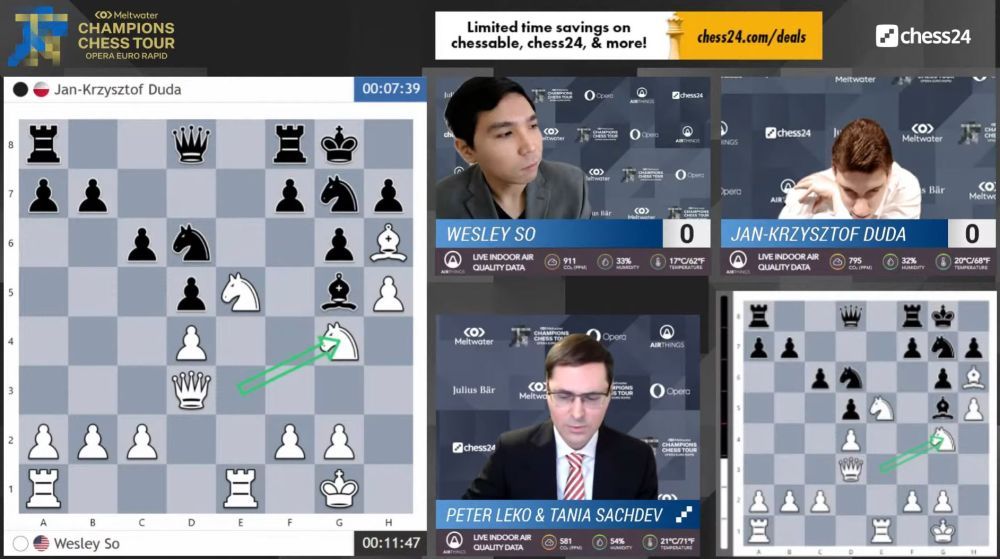 White is planning to make black's position difficult. How should black respond after 20.N3g4 ? 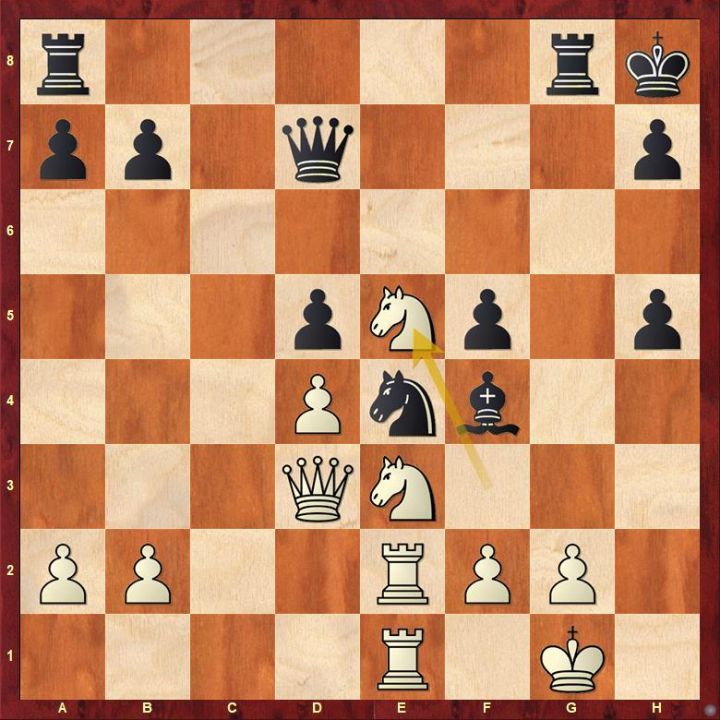 Black is in firm control here. Find out the best continuation for black after 30.Ne5. The game continued with 30...Qg7 and black managed to regroup his pieces.

The second game between Duda and So was quite an interesting one. So decided to give up his queen for rook, bishop and knight early in the middlegame. 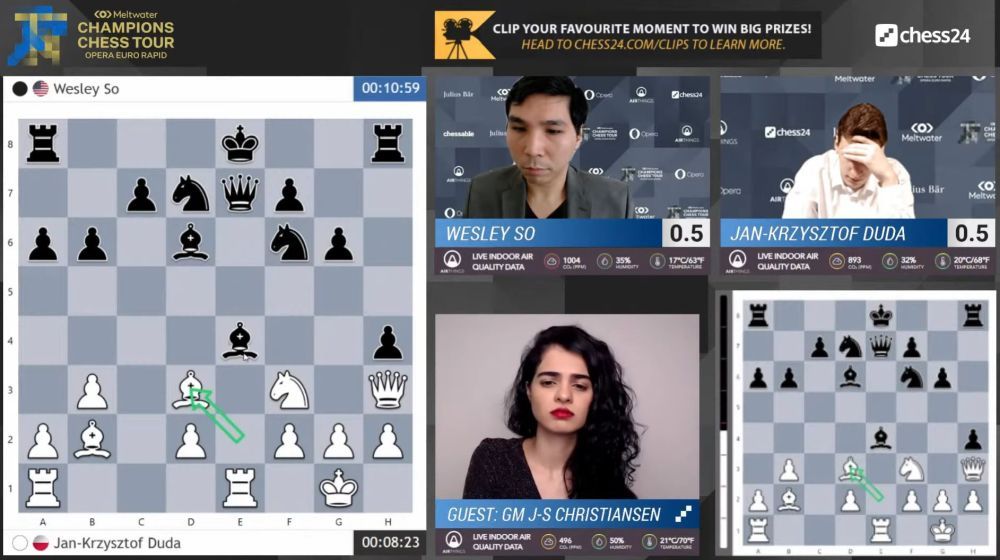 Black made the obvious choice of 16...Bxd3 17.Rxe7+ Be7 and now the threat of 18...Bf5 to trap the queen at h3 is looming large. White obviously prevented it with 18.Nd4. Eventually white ended up with a queen against three minor pieces. 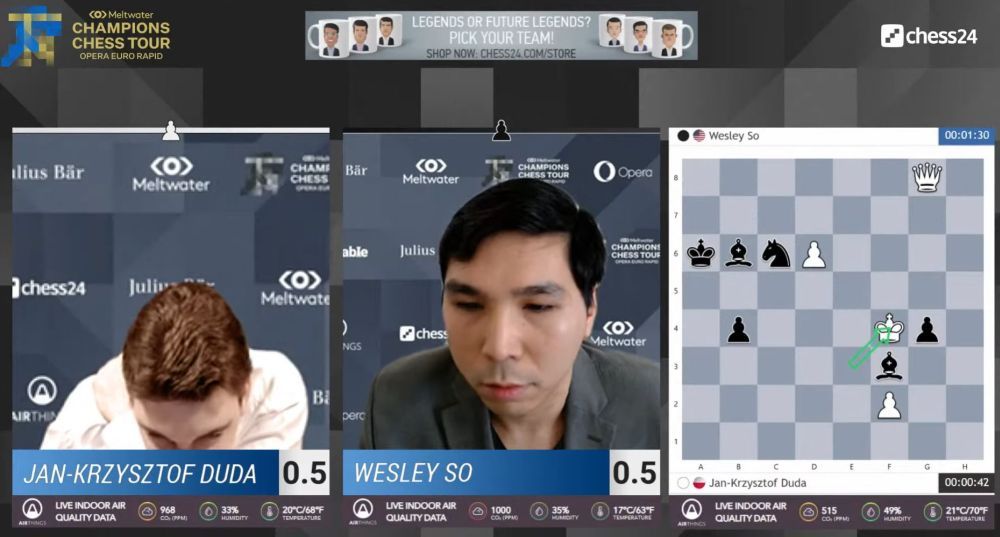 Just when it seemed like black will try to create something with the passed b-pawn, So blundered with 70...Bxf2 and immediately lost the game as the bishop falls after 71.Qa2+.

The third game between So and Duda was heading towards a draw. However Duda made an error which shifted the balance in So's favor. 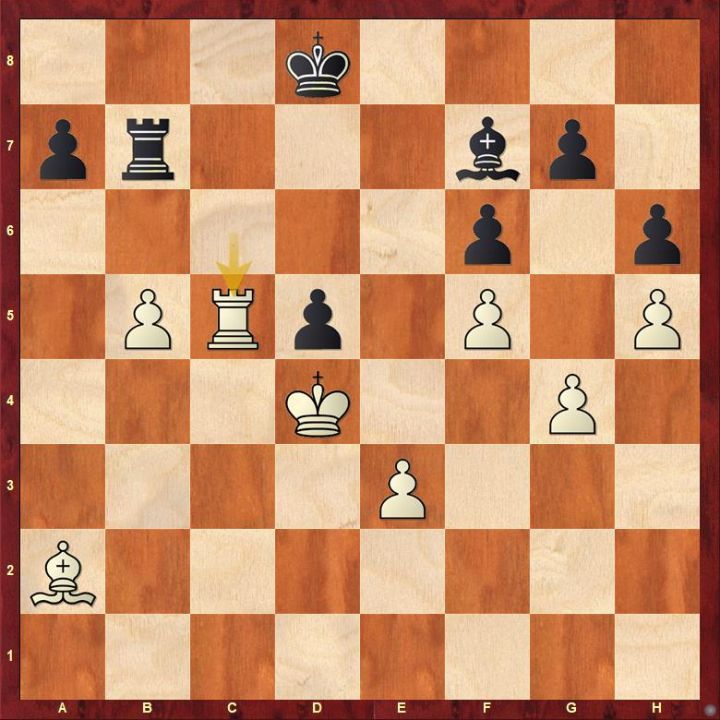 The d5-pawn is about to fall. There is no way for black to defend it. What should black do after 76.Rc5 ? 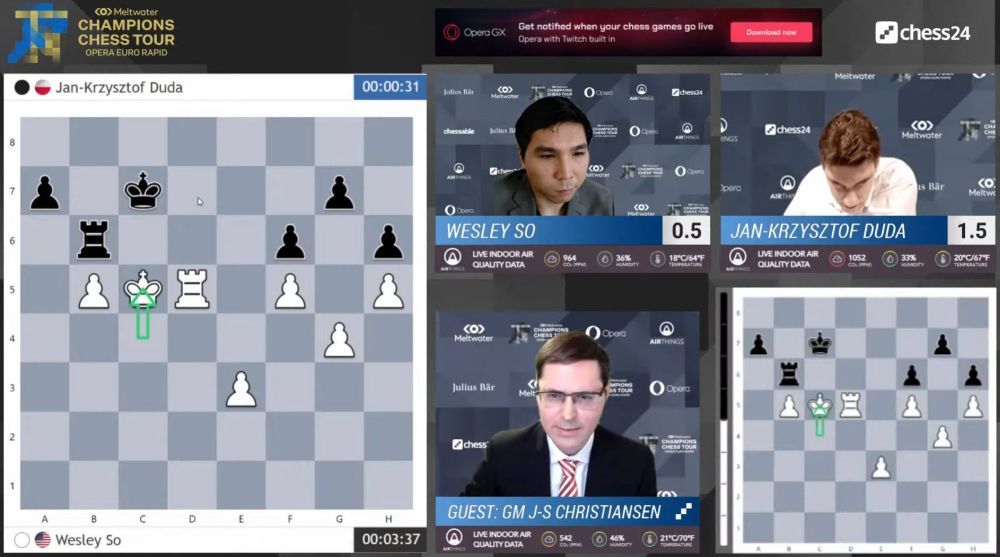 Black had one last chance to secure a draw after 81.Kc5. What was it? The game continued with 81...Rb8 and it was all over for black.

Duda sacrificed an exchange to save the position but that was not enough as his opponent's attack became too much to overcome. 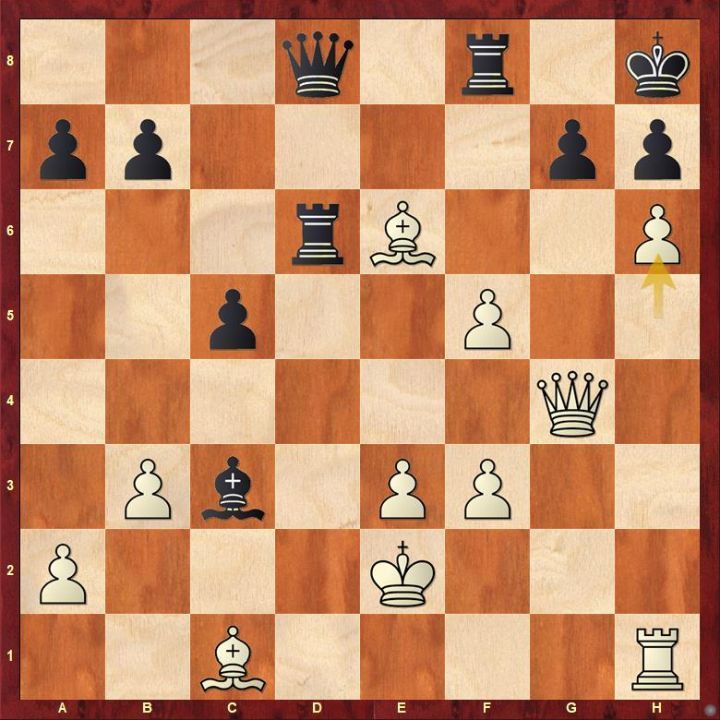 In an already difficult position, the straw that broke the camel's back was 26.h6 as it allowed black to strike on another weakness with 26...g6. Black won the game in another nine moves. Thus So won the first set 2.5-1.5

Giri got a good position in the middlegame but he was unable to capitalize on it. 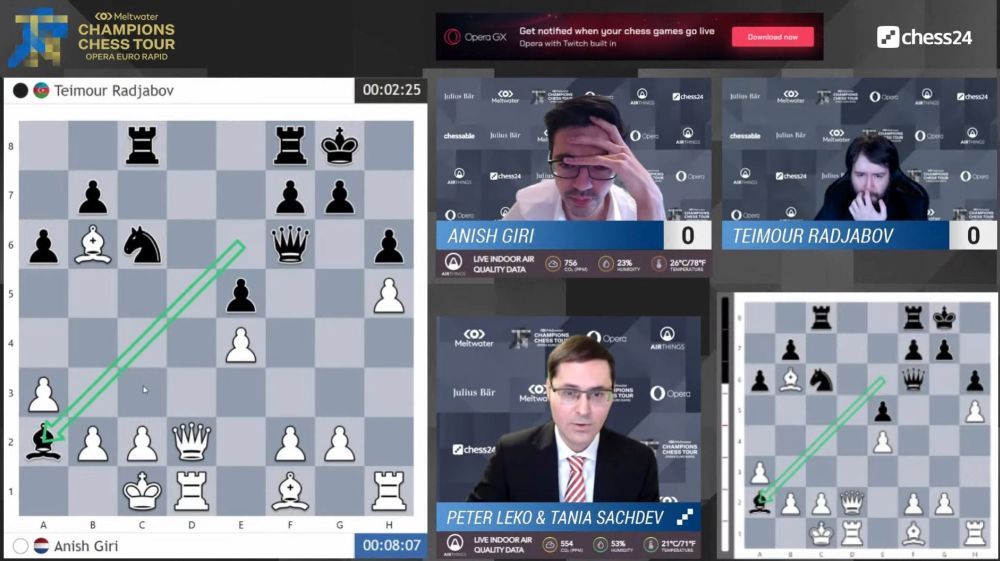 The a2-bishop is completely misplaced. It cannot be trapped though. Find out the best continuation for white to make the most out of it. Eventually white got an exchange but he could not maintain his advantage, had to return the exchange to equalize the position and make a draw in the end.

The second game between Radjabov and Giri was an uneventful draw. The third game was an interesting one.

Find out the best continuation for white here. The game went on with 22.Bf1 which is not the best choice. 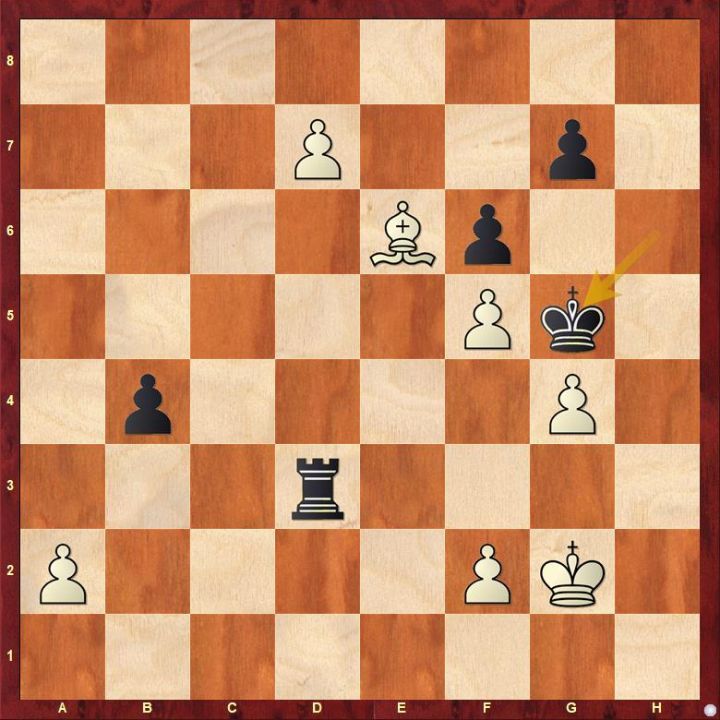 Radjabov's ambitious play in the opening didn't pay off as Giri equalized without any difficulty. In the early part of the endgame, Radjabov made a tiny inaccuracy which Giri managed to capitalize and slowly realized his advantage. 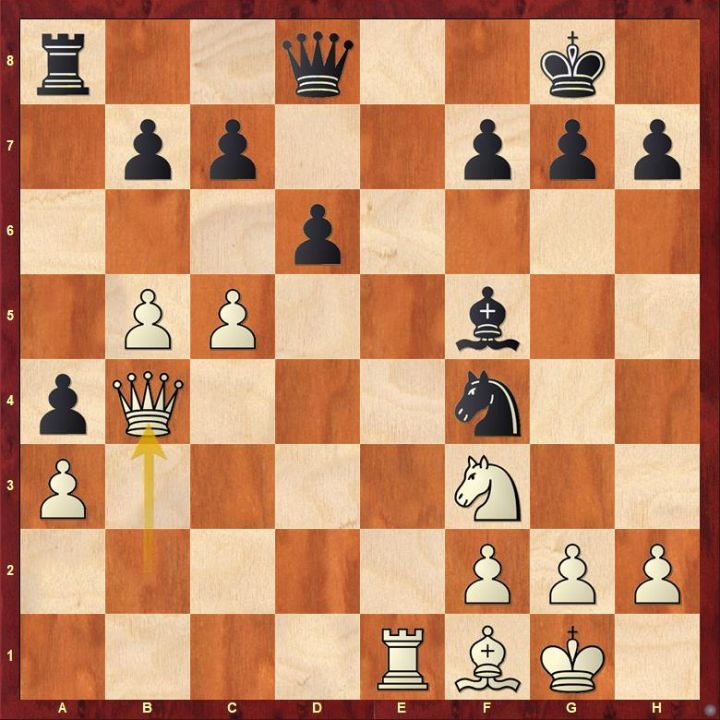 White needed to play 27.Qd4 instead and not allow black to capitalize on his queenside pawn majority. With this win Giri managed to level the set 2-2.

"It's like coming back to a coach!" | Video: ChessBase India 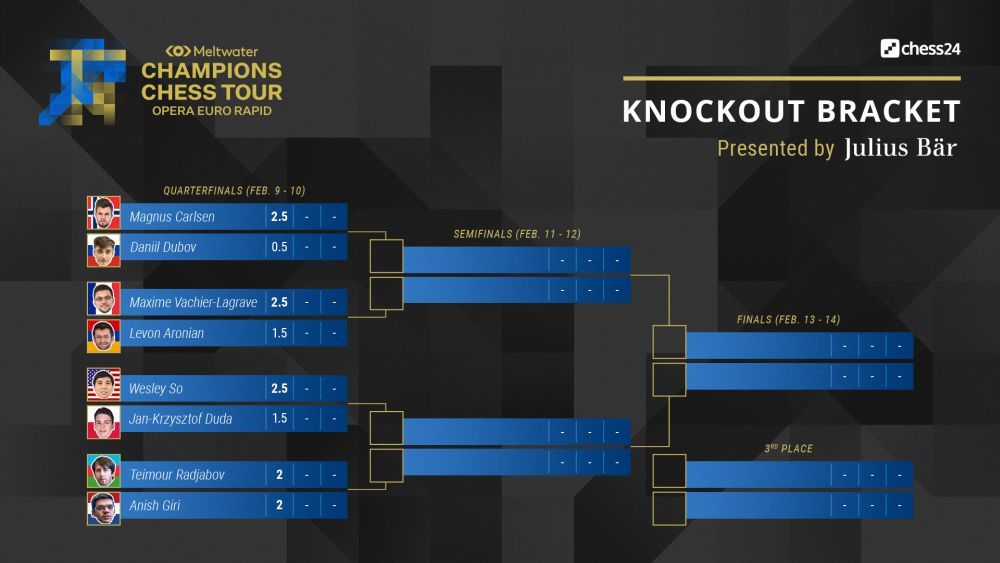 Carlsen, Vachier-Lagrave and So have the advantage | Photo: Champions Chess Tour