Fabiano Caruana completely dominated the Meltwater Champions Chess Tour FTX Crypto Cup Day 2 and 3 as he topped the Prelims stage with 10.0/15. Four players finished with 9.0/15, they are - Giri, Nakamura, Vachier-Lagrave and So. Carlsen and Nepomniachtchi won their last round game to advance to the Quarter-Finals. New in Chess Classic finalists Carlsen and Nakamura will battle each other in the Quarter-Finals. Among other match ups, Caruana will go against Nepomniachtchi, So vs. Vachier-Lagrave and Radjabov vs. Giri. Watch Quarter-Finals action tonight on ChessBase India youtube channel from 8:30 p.m. IST. with live commentary by IM Sagar Shah and Amruta Mokal. Photo: Lennart Ootes/FIDE

Carlsen and Nepomniachtchi barely advances to the Quarter-Finals

Carlsen and Nepomniachtchi both were reeling till the end of the Prelims but a win in the last round made sure both the world champion and the challenger to the world championship advance to the knockout stage. Caruana who is playing his first online event of the season has been absolutely phenomenal as he scored 10.0/15 and finished a full point ahead of the competition in the Prelims. 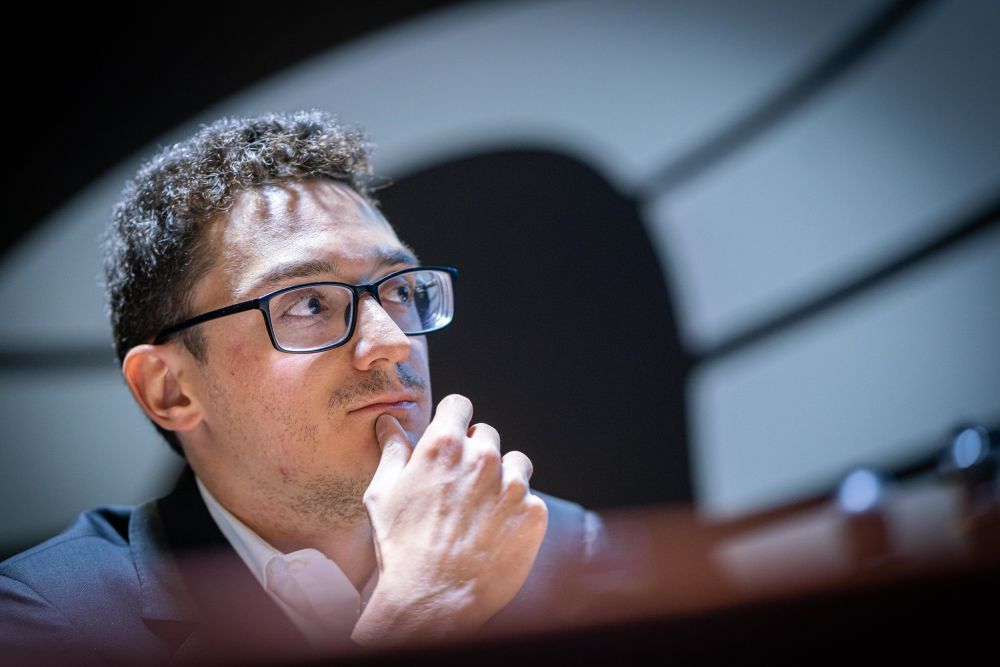 Caruana has been consistent in the entire Prelims | Photo: Lennart Ootes/FIDE 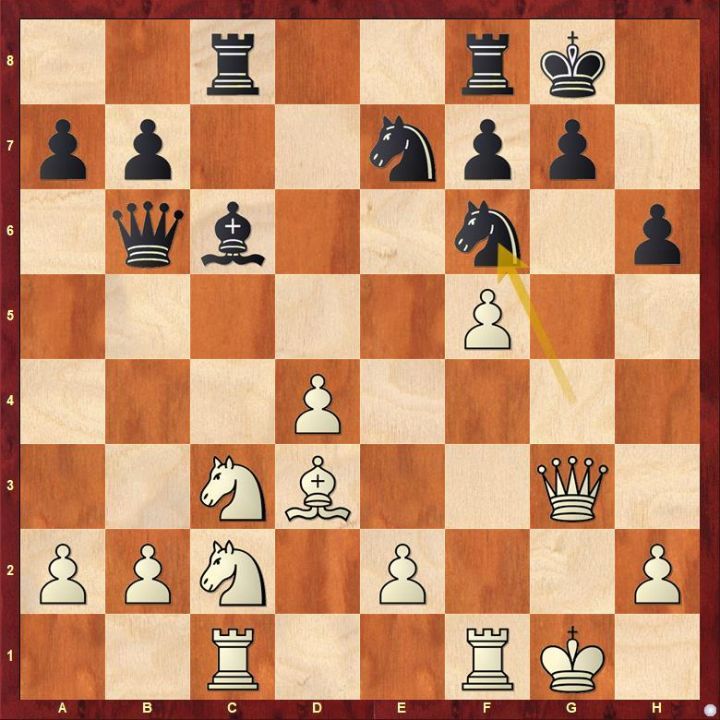 Computers cannot help one to understand Aronian's ideas. While the first thought might be to play 23.e4, you cannot deny the idea of making a queen-rook battery on the g-file to be tempting. That is exactly what the Armenian did with 23.Kf2. 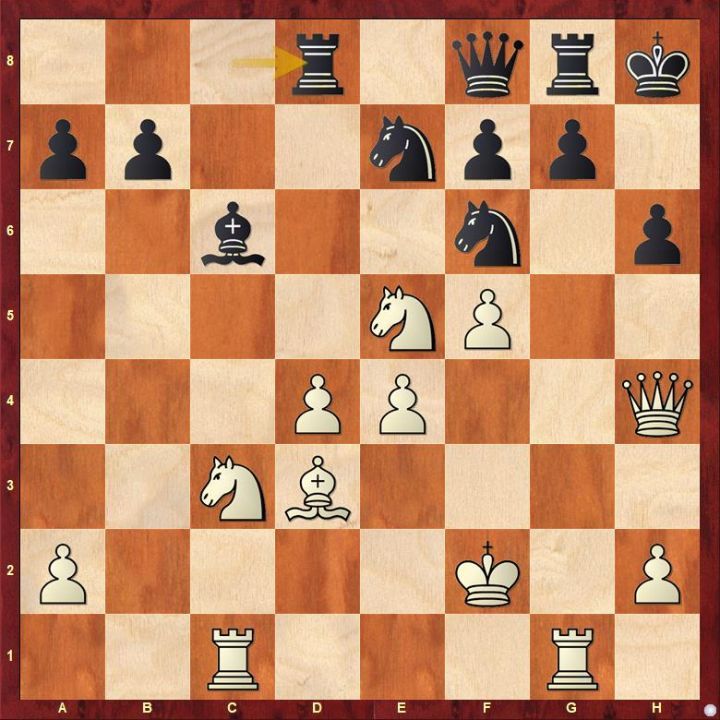 While 30.Ne2 may seem to be the reflex move to defend the d4-pawn, the ever-creative Aronian played 30.Ke3. Because why not? The king cannot be attacked easily and moreover white is completely winning as black's pieces are cramped up on the kingside. It's just a matter of time. 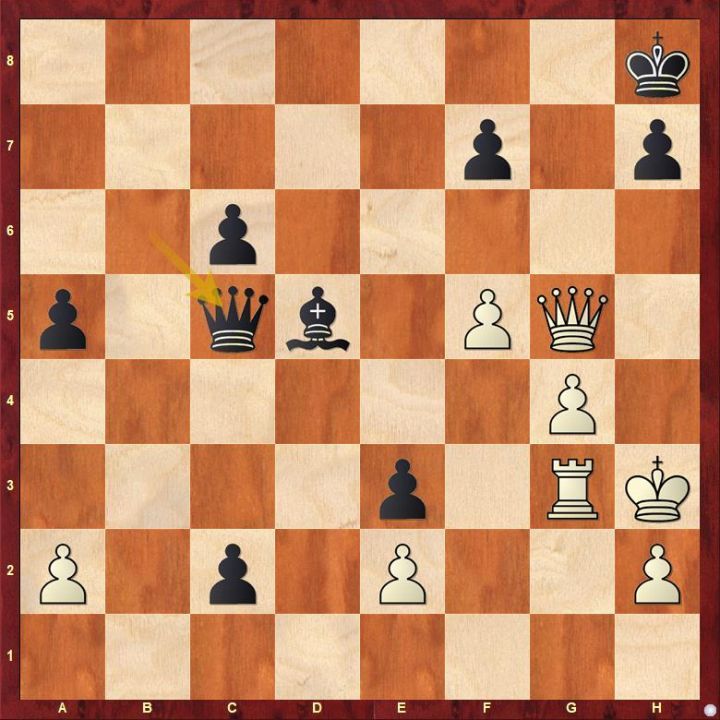 White can win this despite black's threat of pawn promotion looming large. Find out white's winning plan after 33...Qc5.

Carlsen continued his jest with Giri and started with 1.b4 and the Dutch lost a pawn in the middlegame. He was never in danger and the game as expected petered out to a draw.

Mamedyarov won a tumultuous endgame which Aronian could have saved. 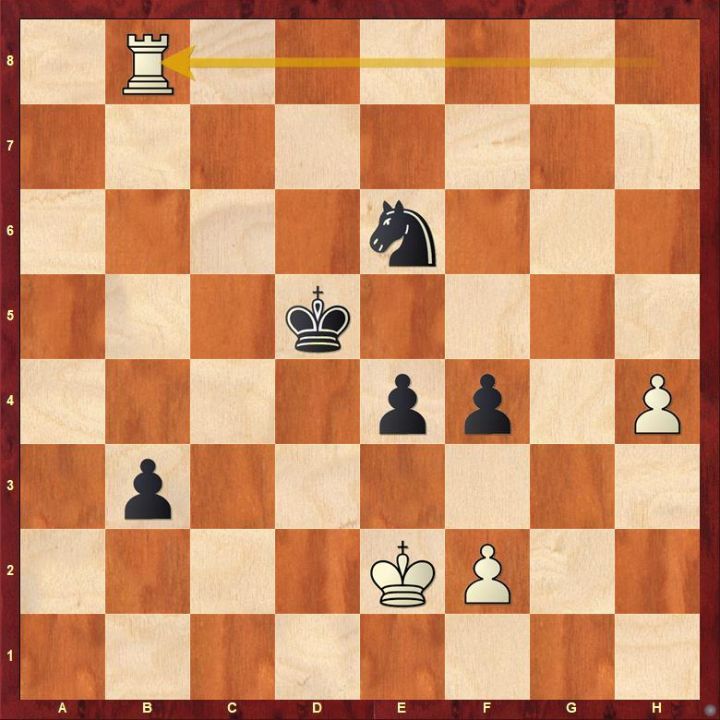 One of the final opportunities black had to save the game was after 53.Rb8. Find out the best continuation for black. Mamedyarov won the game in another few moves.

Nepomniachtchi's woes continued as he lost his second consecutive and third game of the event, this time against Radjabov. 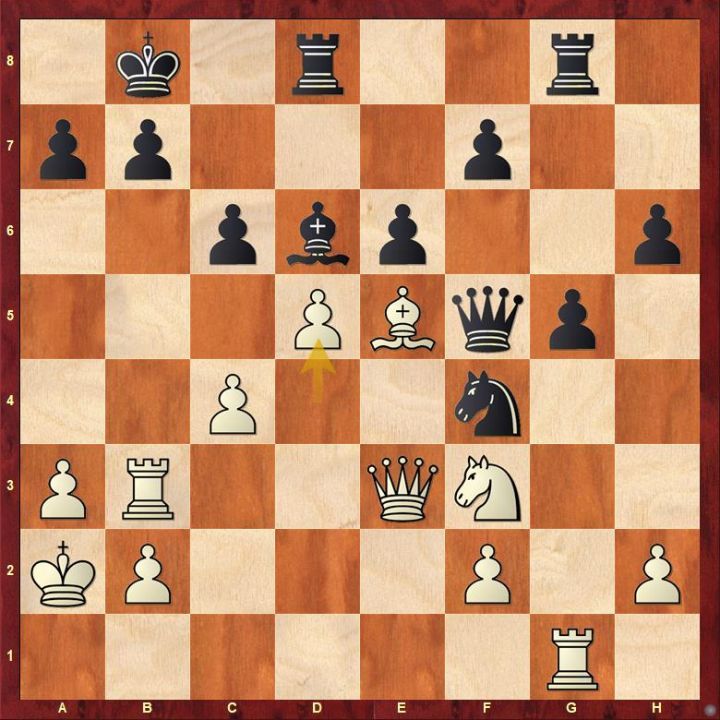 Although there are some small tricks but 24.d5 does not work for white. Another uncharacteristic play by Nepomniachtchi cost him the game.

Alan Pichot scored his first win of the event against Firouzja. After sacrificing his knight on the tenth move, he managed to trap his opponent's queen after Firouzja blundered. 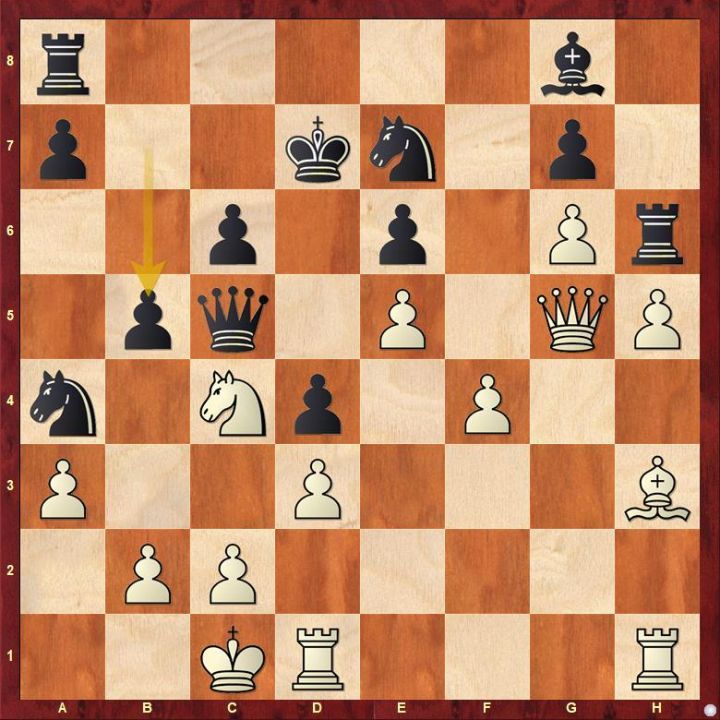 28...b5 is a blunder. Find out why. Black needed to play 28...Rf8 and everything would have been fine. Despite having three minor pieces for a queen, it wasn't enough for Firouzja to fight back as he suffered his first loss of the event.

Round 8: Grischuk implodes against 1.b3

As Peter Leko mentioned during live commentary, one needs to play solid against 1.b3. Taking chances only created them for Grischuk's opponent. 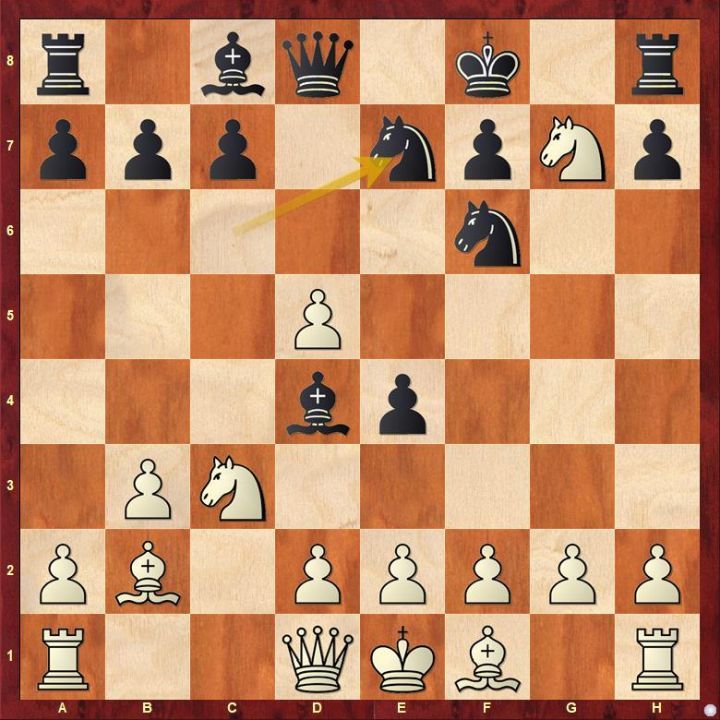 Black needed to play 9...Nb4 as 9...Ne7 only helps white with his intentions. Grischuk was unable to land any offense in the game and lost it in another 16 moves.

Firouzja did not anticipate Giri's attacking potentiality on the kingside and had to pay a heavy price for it. 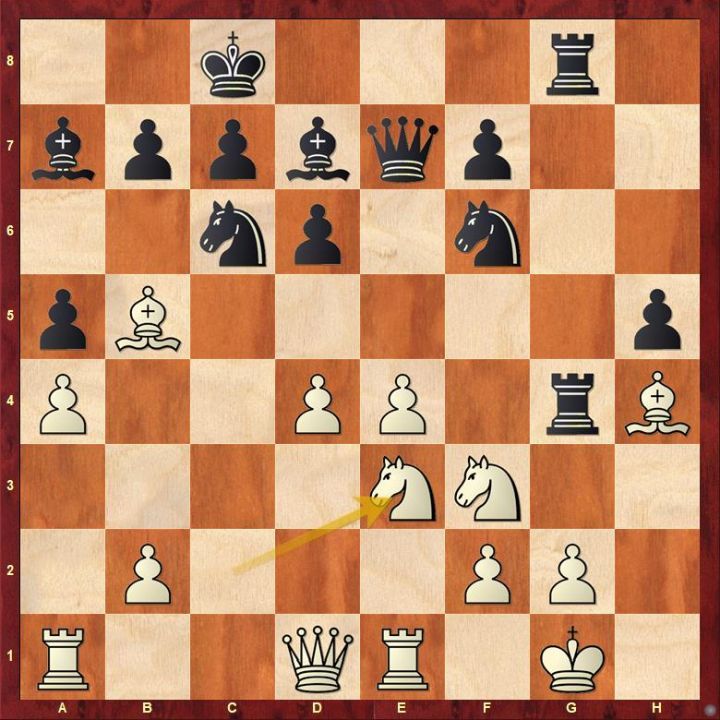 19.Ne3 attacks the g4-rook. How should black react here? 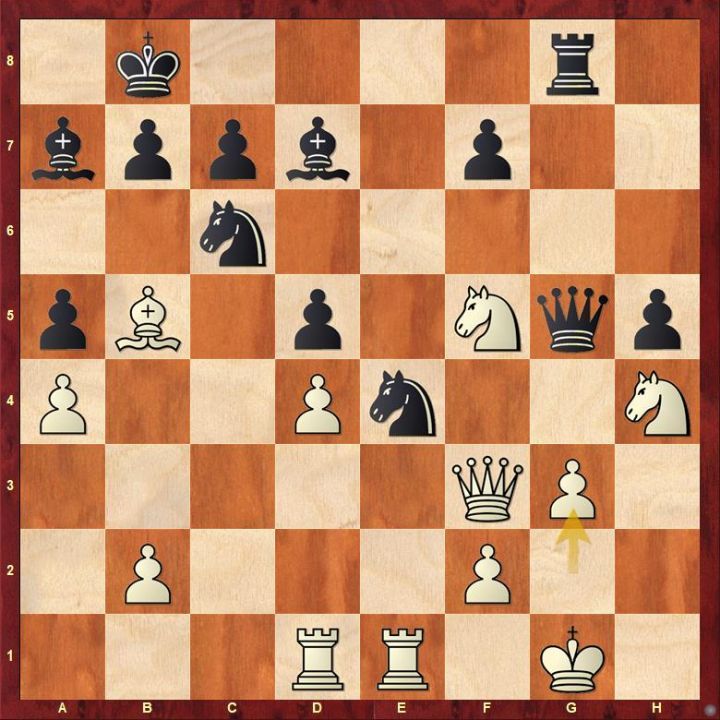 The game continued with 24...Nxd4 but there was a better continuation. What is it? Giri won the game in another 16 moves.

Svidler scored his second victory of the event, this time against Pichot.

Round 9: Pichot misses against Caruana

Aronian made a simple tactical error in the endgame which cost him an exchange and eventually the game against Nepomniachtchi.

Caruana scored his second victory of the day and Pichot was his victim this time. However the former world championship challenger did not have it easy all the time. 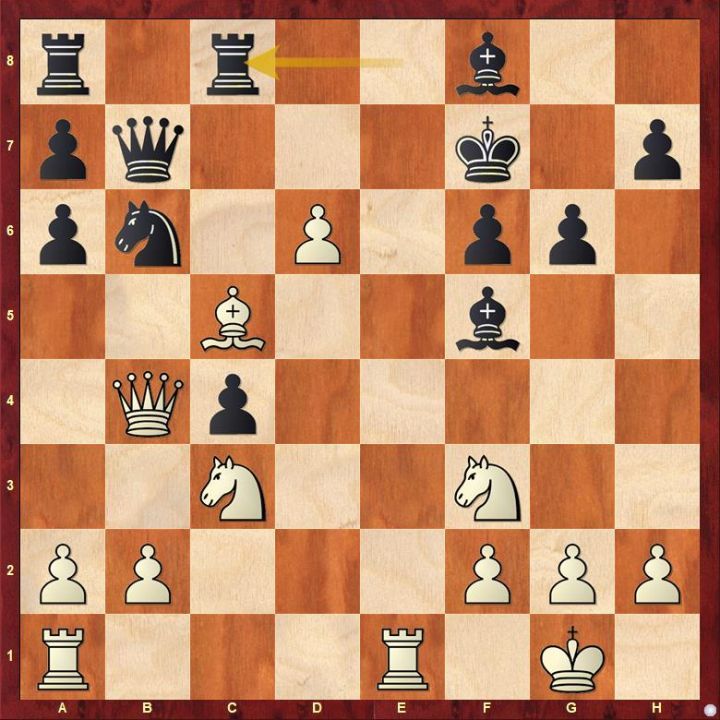 If white played 23.Nd4 here, things would have shifted in his favor and who knows what the outcome of the game would have been. The game went on with 23.Rad1 and Caruana went into survival mode with 23...Bd3. 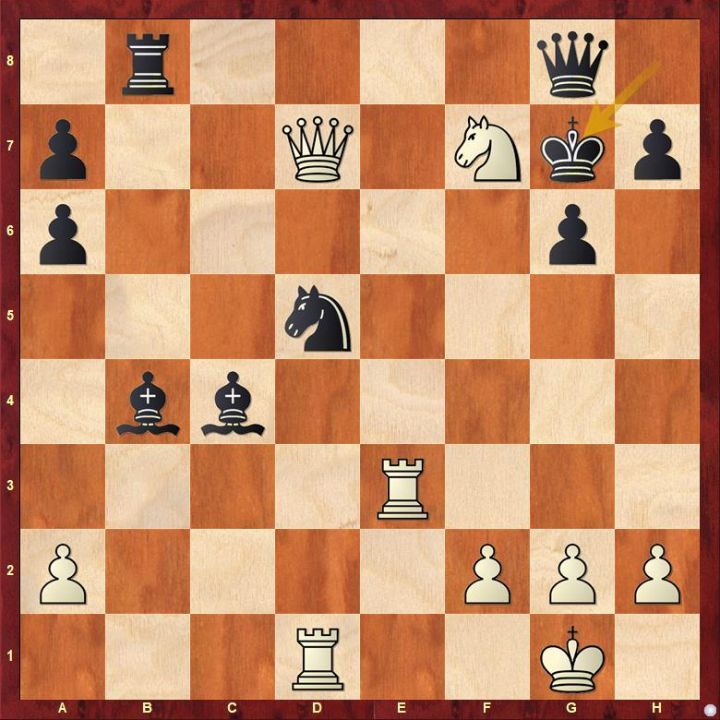 One of the most definitive chance for white arrived 34...Kg7. Find out the winning continuation for white here. 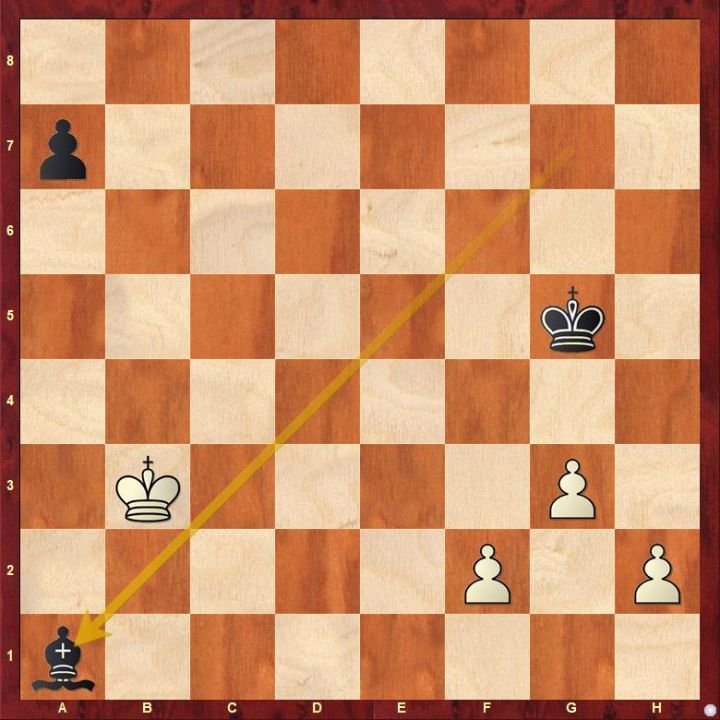 White can still save this game. How? White blundered here with 61.Ka4 and lost the game in nine moves.

Giri suffered his first loss of the event against Svidler. 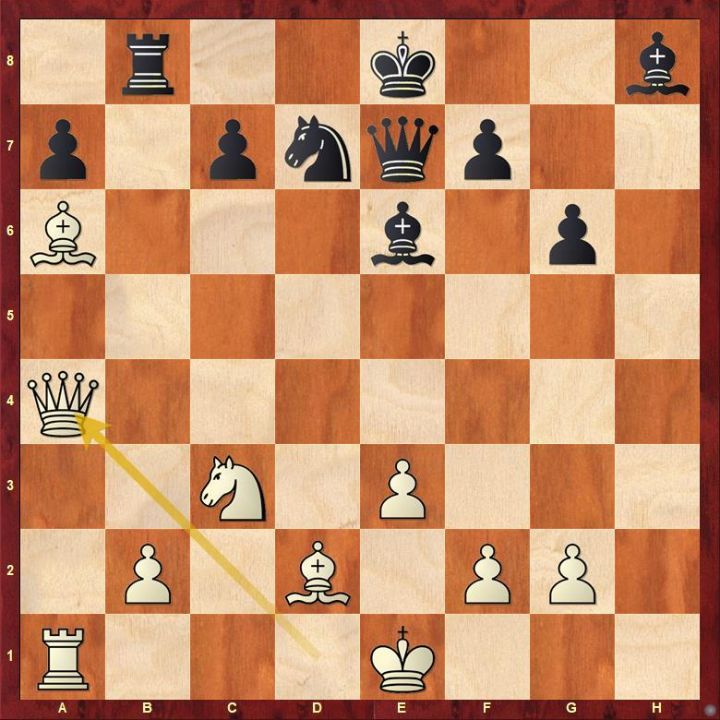 18.Qa4 invites trouble for white. Find out why. Soon black got material advantage and eventually won the game.

Dubov's tactics did not work against the world champion. 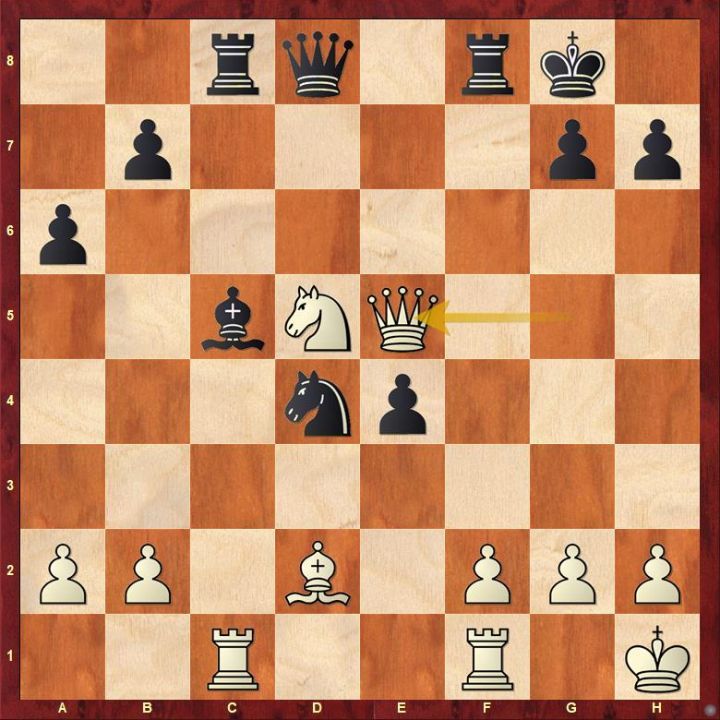 21.Qxe5 Rf5 22.Qxd4 works against white as the resultant rook-bishop ending is in black's favor as white loses an important pawn.

Carlsen made an inaccuracy in the endgame which allowed Aronian to gain the upper hand. 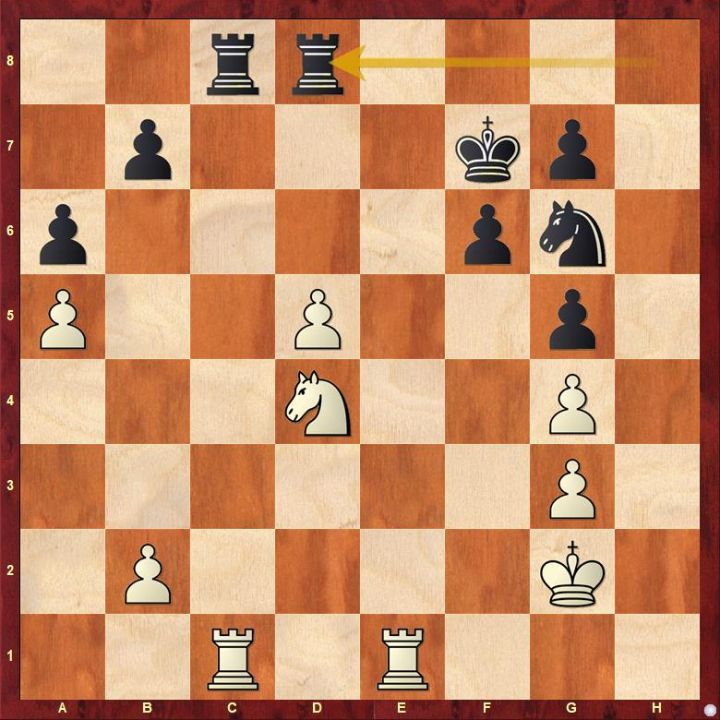 White played 33.Ne6 Re8 but then he opted for 34.b4 when there was a better continuation for white. What is it? 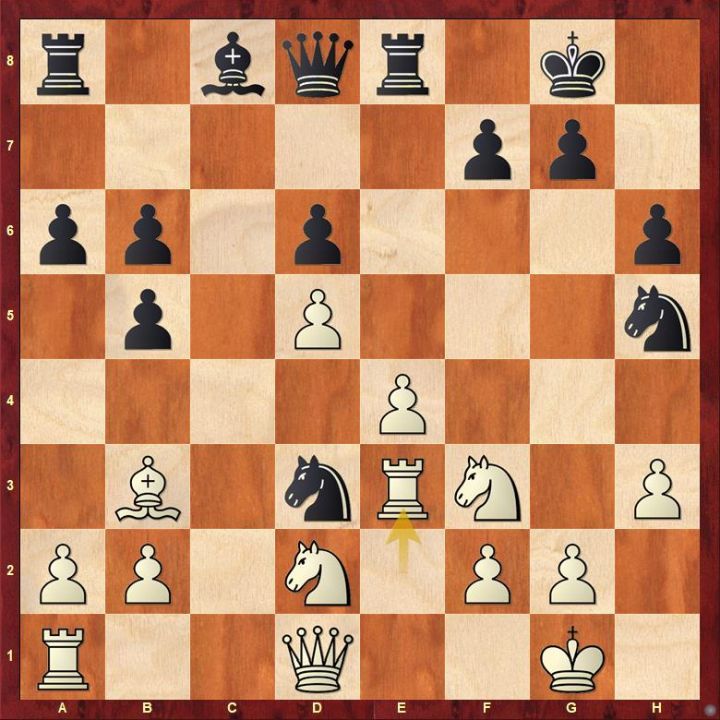 Black should have played 17...Nhf4 but Giri opted for the dubious 17...Nxb2. Caruana built up well on his positional advantage and converted it into a full point.

Round 11: Nakamura survives a scare against Carlsen

Giri beat Radjabov after the latter miscalculated in the endgame. 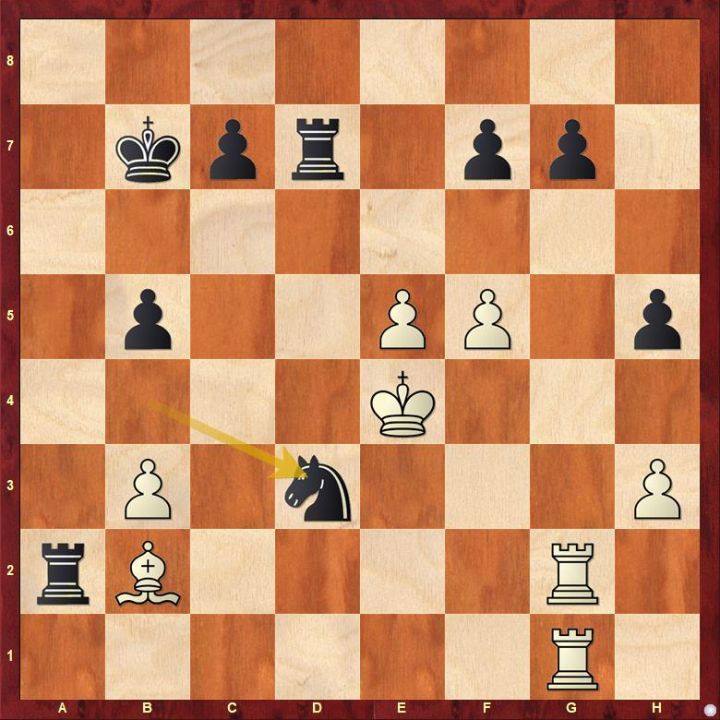 Dubov lost to Firouzja in a grueling battle.

Despite being better for the majority of the game, Carlsen was unable to convert his advantage against Nakamura. 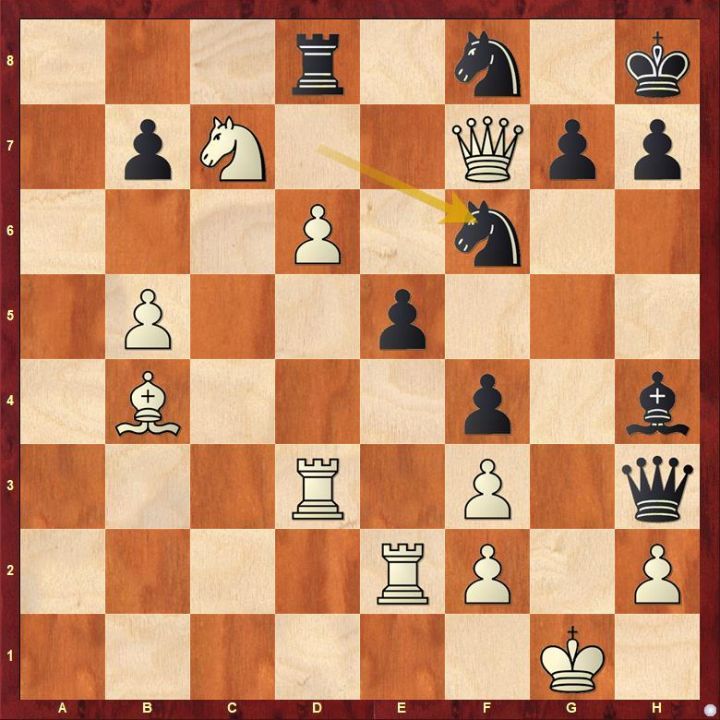 Try to find out white's best continuation in the above diagram. The game went on with 40.Bc3 and white's advantage slowly dwindled away.

Round 12: Firouzja held Carlsen to a draw

Firouzja made a solid draw against Carlsen.

Caruana beat Grischuk as the latter blundered a piece in a slightly inferior endgame.

Radjabov was cruising towards victory against Ding Liren until he liquidated the position into an equal king-pawn endgame but the world no.3 made a terrible blunder and lost the game. 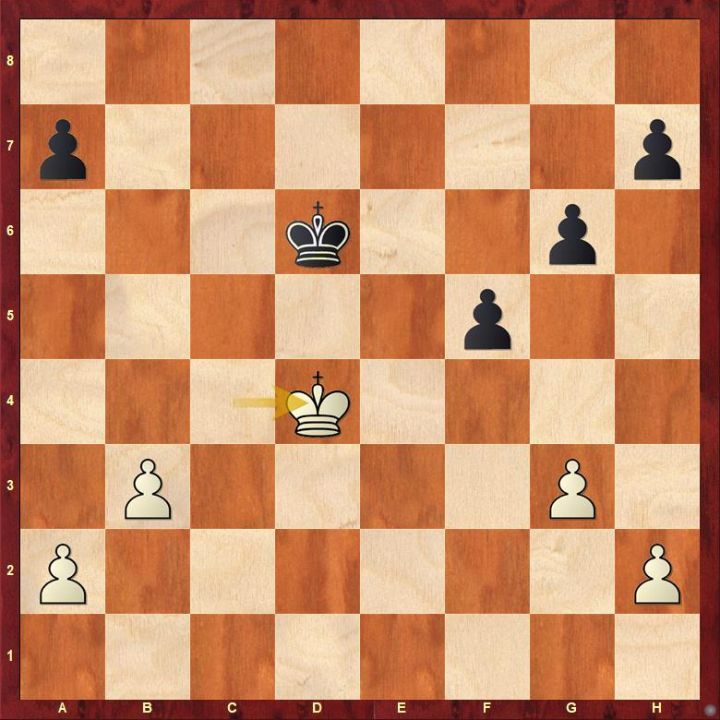 The endgame is far from over for black. Find out how black can save it.

Mamedyarov missed a few chances and Giri managed to salvage a draw. 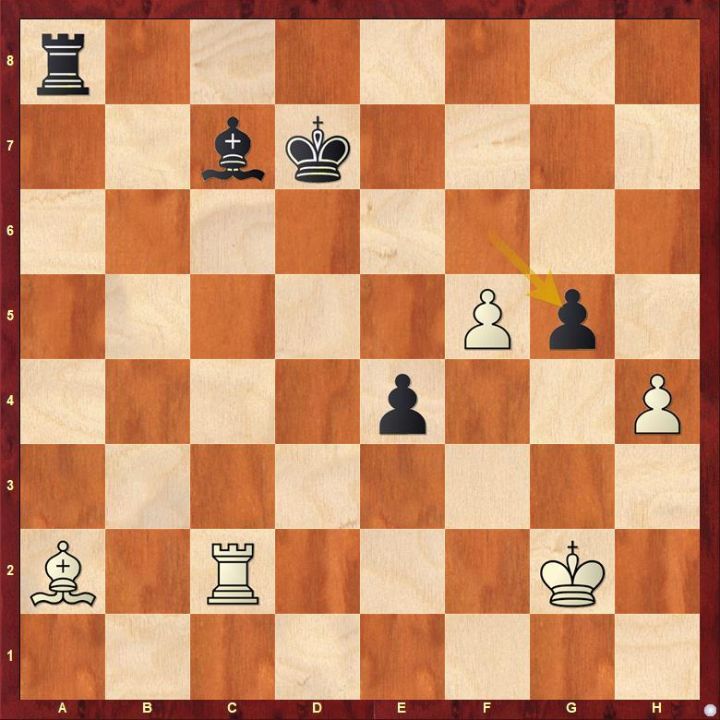 The game continued with 49.hxg5. What should have white done before taking the pawn?

Round 13: Giri draws a winning position

Pichot lost a lot of pawns and did not get any compensation for it against So.

Giri repeated moves in a completely winning position against Nepomniachtchi. 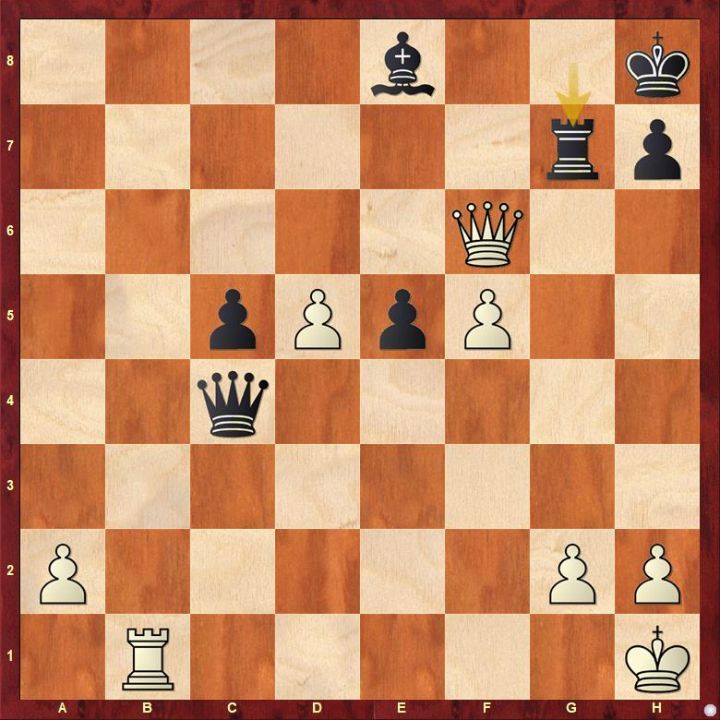 Find out the winning continuation for white here.

Nakamura suffered his first and only loss of the event so far against Firouzja.

Aronian beat Firouzja after the latter misplayed in the endgame.

Ding Liren was unable to materialize his advantage into anything substantial and eventually Nepomniachtchi walked away with a victory.

Pichot lost the final game of the Prelims stage against Aronian.

Nepomniachtchi beat Grischuk to secure his place in the Knockout stage.

Dubov who had a forgettable event, finished the tournament on a high note by beating Mamedyarov.

The Bitcoin prize fund evaluation increased on 24th May

Caruana has been consistent in the event so far | Photo: Champions Chess Tour 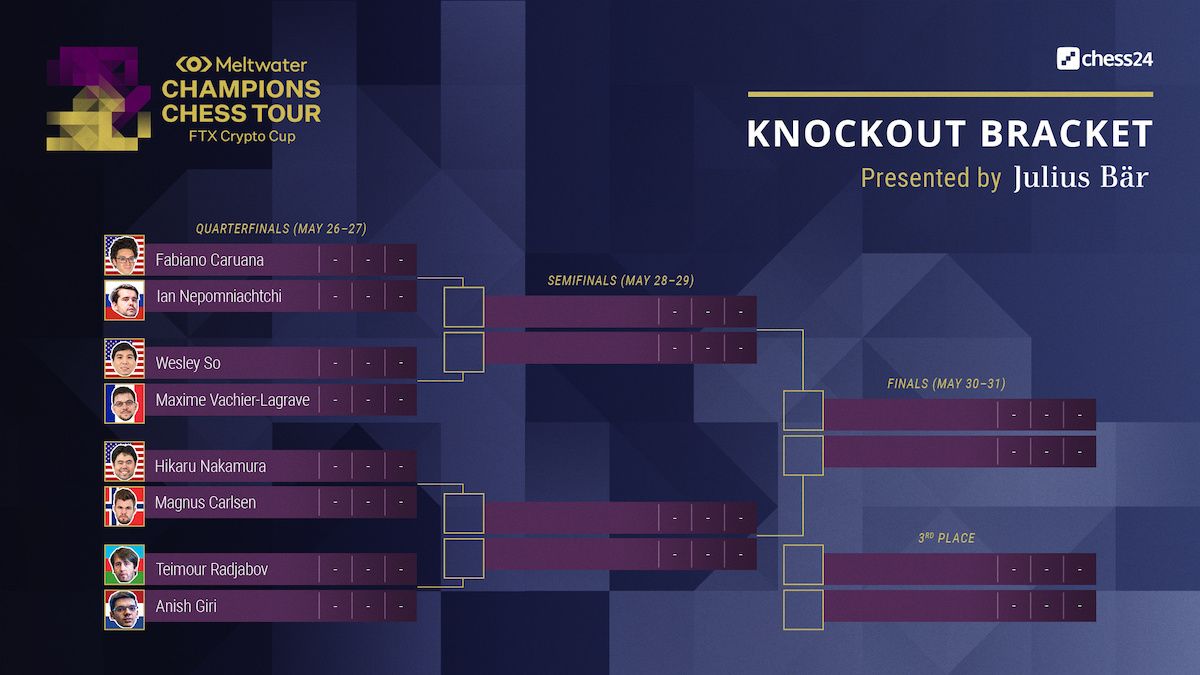 New in Chess finalists Carlsen and Nakamura will face each other in the Quarter-Finals | Photo: Champions Chess Tour