Opera Euro Rapid SF Day 2: Carlsen and So set up a rematch in the Finals

Vachier-Lagrave managed to beat Carlsen three times but it was not enough for him to advance to the Finals of Meltwater Champions Chess Tour Opera Euro Rapid as he lost Armageddon. So took only three games to beat Radjabov as the latter misplayed in the opening in the third game after making two draws. So will face Carlsen in the Finals. It will be interesting to see if Carlsen can redeem his loss against the Fischer Random world champion at Skilling Open. Finals will start tonight from 9:30 p.m. IST. Catch the live stream with IM Sagar Shah and Amruta Mokal on our youtube channel. Photo: chess24 Live stream

Vachier-Lagrave beat Carlsen three times, it was not enough

Carlsen once again won the Armageddon with white pieces to advance to the Finals. Just like Dubov, Vachier-Lagrave also beat the world champion three times before losing Armageddon. The world champion is still not at his best but he is winning games when it matters the most. That's how the difference is made. Meanwhile So made two draws with Radjabov before beating the Azeri in the third game. So will once again face the world champion in the finals of Meltwater Champions Chess Tour. 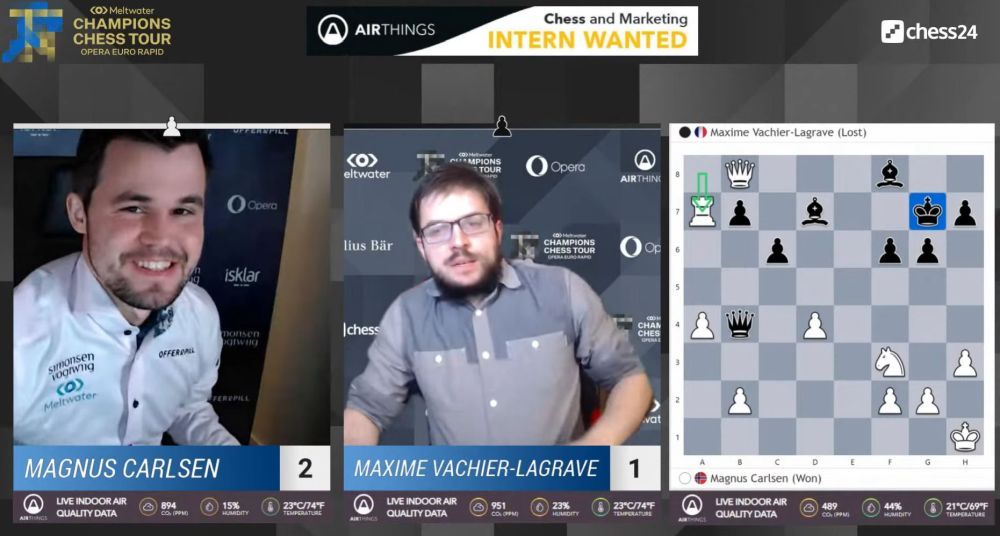 The world champion is still hitting some off-notes as he missed a simple win here due to a quick move | Photo: chess24 live stream 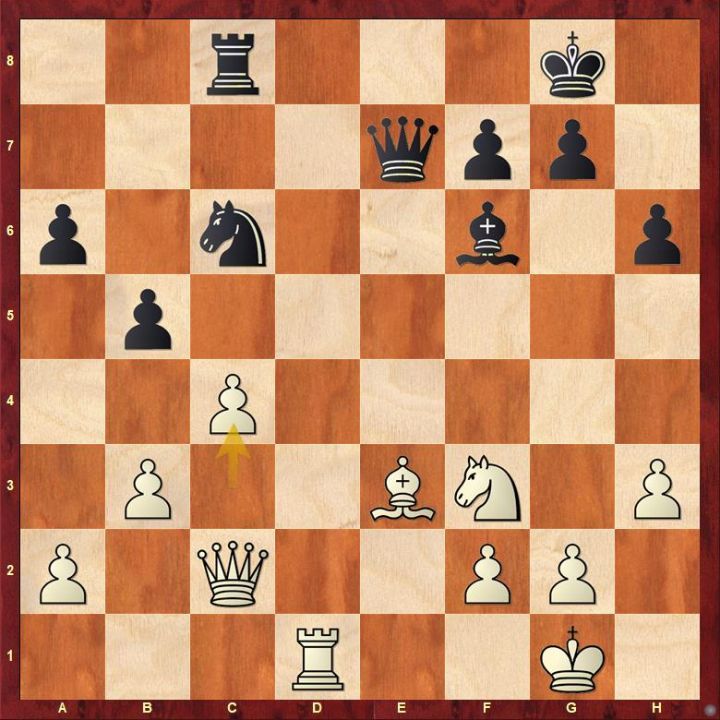 29.c4 right now is incorrect as shown in the game, black can play 29...Nb4 and white is unable to create a passed pawn on the queenside. The game eventually ended up in a draw.

The second game was a well fought draw.

In the third game, Carlsen made an unforced error and trapped his own bishop. 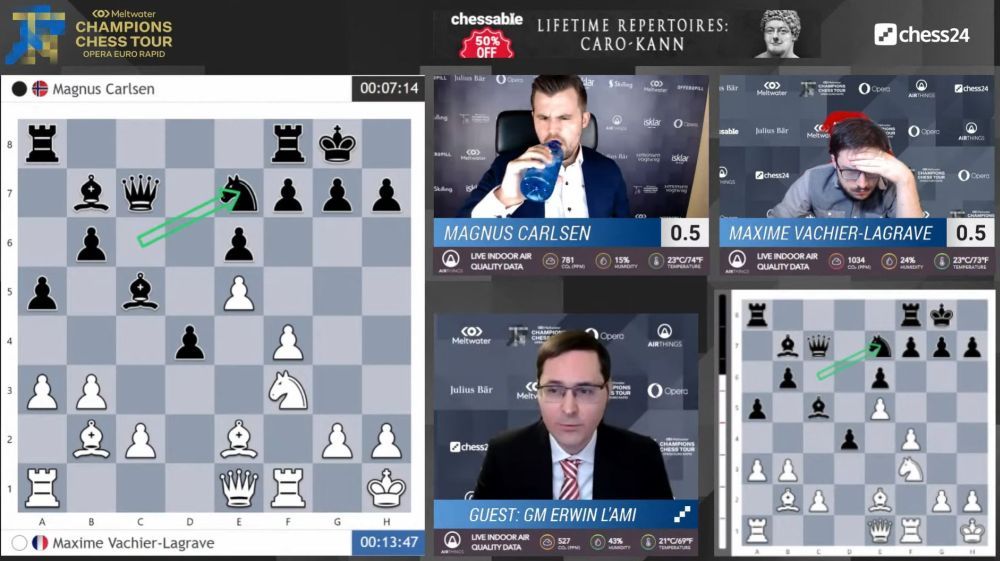 Black could have simply played 17...Rfd8 or h6, but 17...Ne7 instantly loses the game as the c5-bishop gets trapped. White won the game in another fourteen moves.

In the fourth rapid game, Carlsen blundered a piece before having a mouse slip where he just gave away his queen. 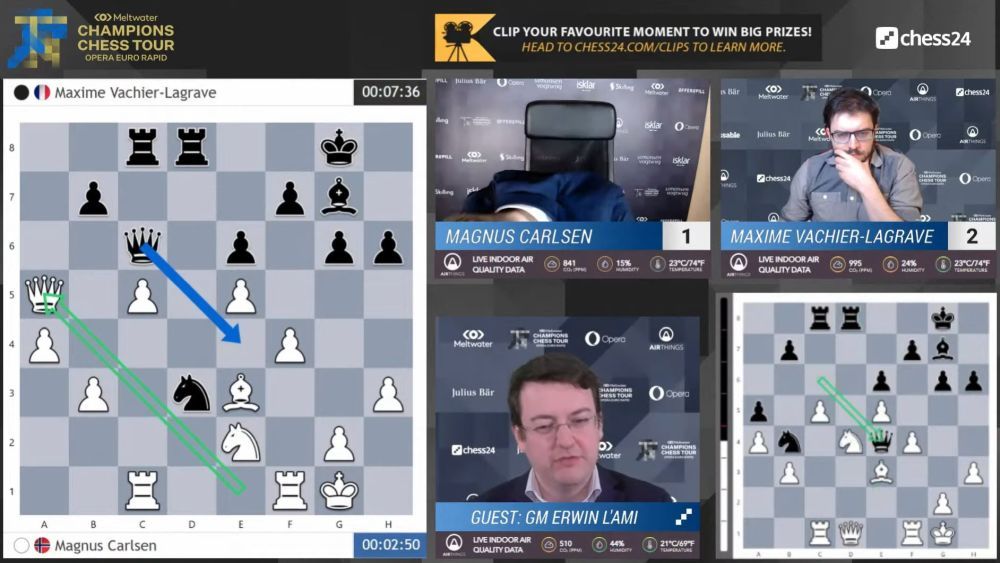 The world champion banged his head on the table when he realized that he made a blunder with 23.Nd4. Thus Vachier-Lagrave won the second set 3-1 by beating Carlsen in two consecutive games.

Carlsen struck back by winning the first blitz game as Vachier-Lagrave made a few incorrect decisions. 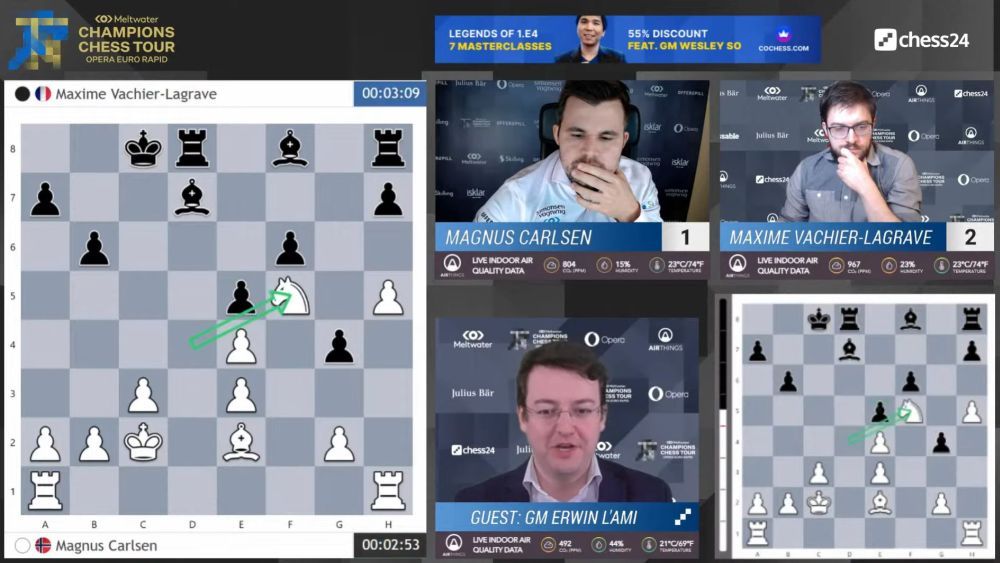 Black was not forced to take on f5. Taking on f5 not only helps white to get rid of the doubled e-pawn but the g4 also becomes ripe for picking. Things started to go downhill for black after 19...Bxf5 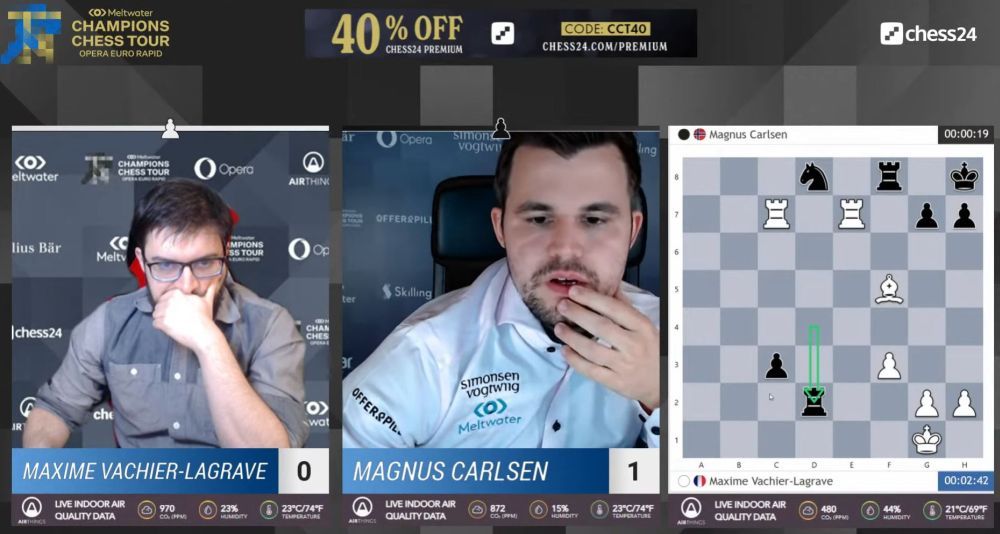 In an already difficult position black played 31...Rd2 which did not help his cause as black does not have c2. The game continued with 32.h4 and white won the game in another 19 moves.

Carlsen once again got the white pieces in the Armageddon. Vachier-Lagrave once again opted for Exchange Grunfeld Defence but this time he landed himself in trouble in the middlegame. 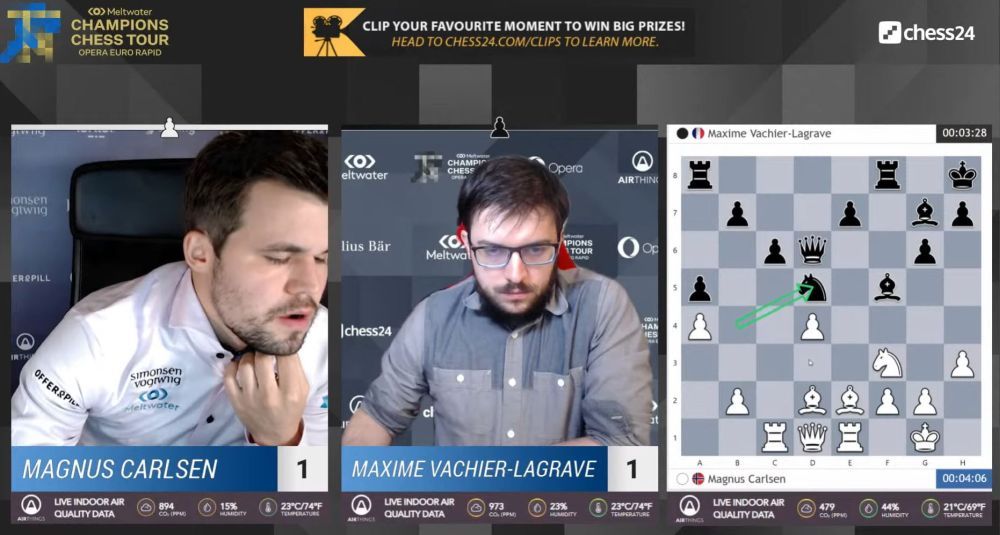 17...cxd5 was a better idea. Black lost few tempo and white completely dominated the position and eventually won the game.

The first game between So and Radjabov was an uneventful draw. The second game was a short 19-move draw. Radjabov opted for a bizarre variation in Nimzo-Indian Defence which got him into a worse position out of the opening. 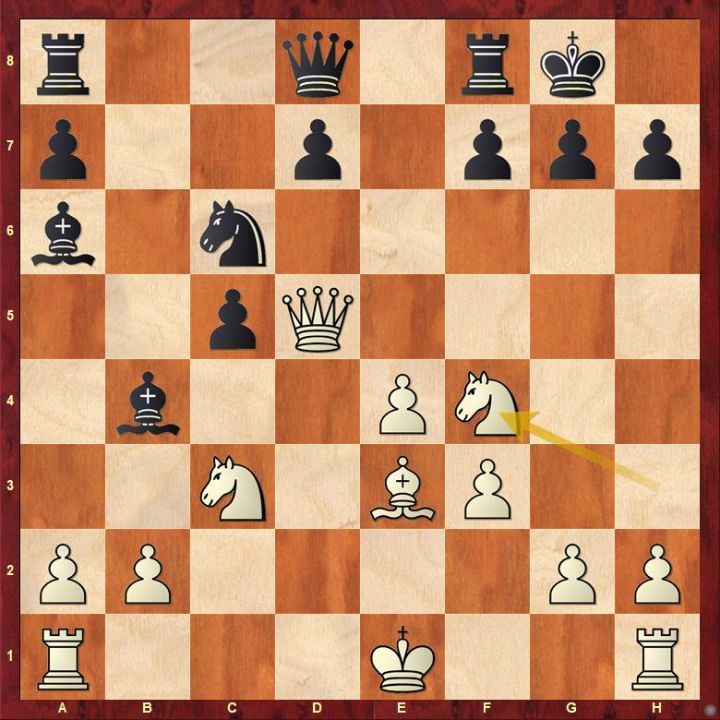 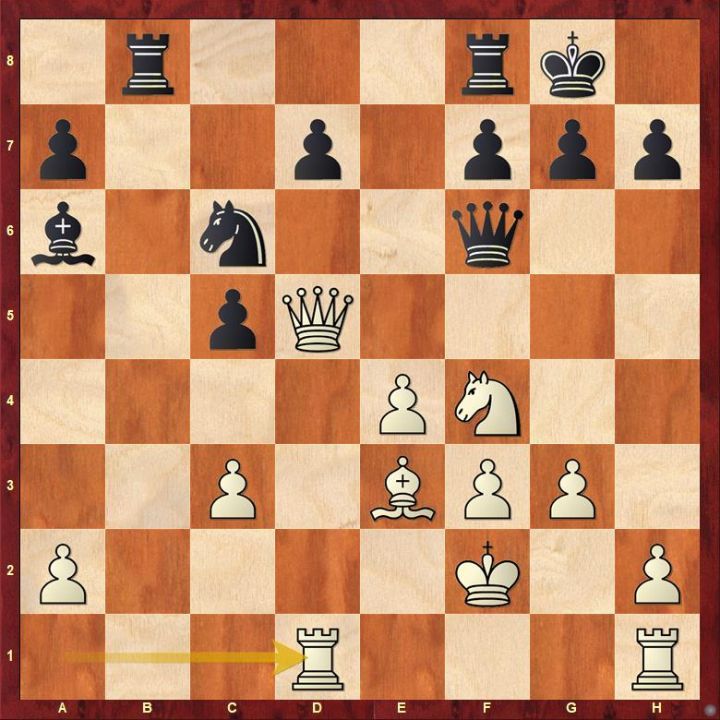 Find out the finish for black after 16.Rad1. With this win So won the second set 2-1 and advanced to the Finals. 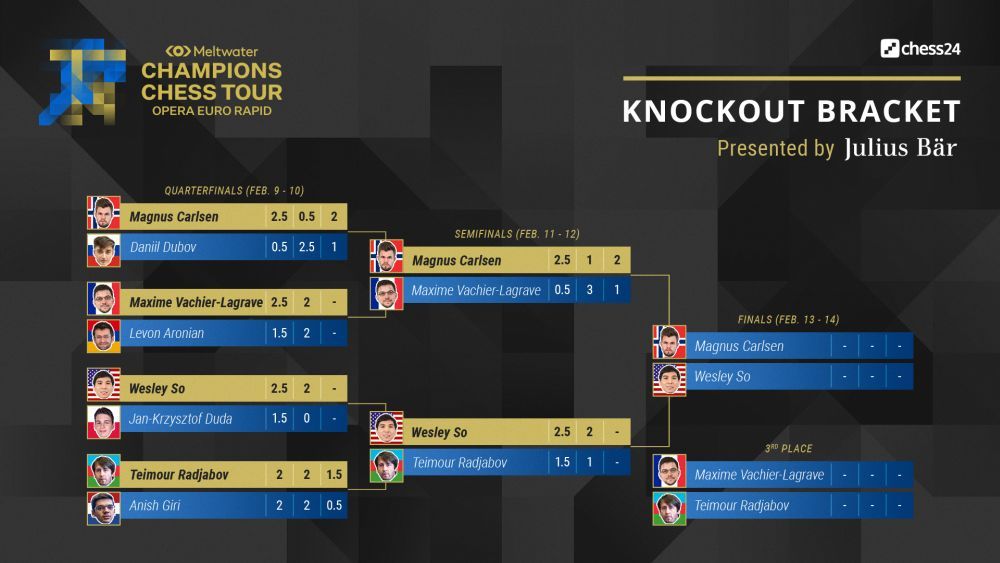