Aronian and Vachier-Lagrave won the first set of the Quarter-Finals against Nakamura and So respectively in Champions Chess Tour Airthings Masters. Both Nakamura and So must win the second set to keep their Semi-Final hopes alive. Carlsen-Dubov clash ended up in a 2-2 draw before both of them scoring a victory over the other. Only Radjabov-Nepomniachtchi is yet to have a single decisive result in the knockout stage. Can Nakamura and So make a comeback like they did in the Skilling Open? Find out on the second day of the Quarter-Finals tonight Wednesday 30th December from 7:30 p.m. IST. Watch the live stream on ChessBase India youtube channel with IM Sagar Shah, Amruta Mokal and IM Soumya Swaminathan. Photo: chess24 Live stream

Nakamura and So in a must-win situation

It goes without saying that Carlsen-Dubov is always expected to have a lot of fireworks and they did not disappoint. Although the first set ended up in a 2-2 draw, both players traded blows as they scored a win each on the first day of the Quarter-Finals. Game of the day definitely goes to Aronian who showcased his positional brilliance against Nakamura in the second game. Aronian won the first set 2.5-1.5 against Nakamura. Vachier-Lagrave completely dominated the Skilling Open winner So by 3-1. Radjabov-Nepomniachtchi is yet to yield a single result as the first set ended up in a 2-2 draw.

The first game between Carlsen and Dubov was heading towards a draw, till Dubov misplaced his rook. 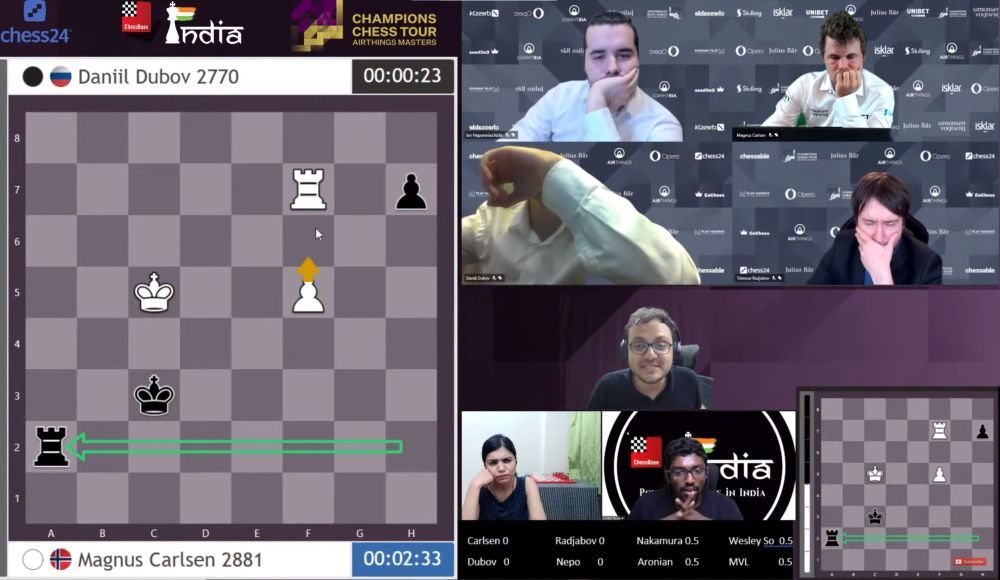 61...Ra2 cost black the valuable time to save the game as the white king got into a better position and black king was far from the defence.

In the second game, Dubov was clearly better in the endgame against Carlsen. 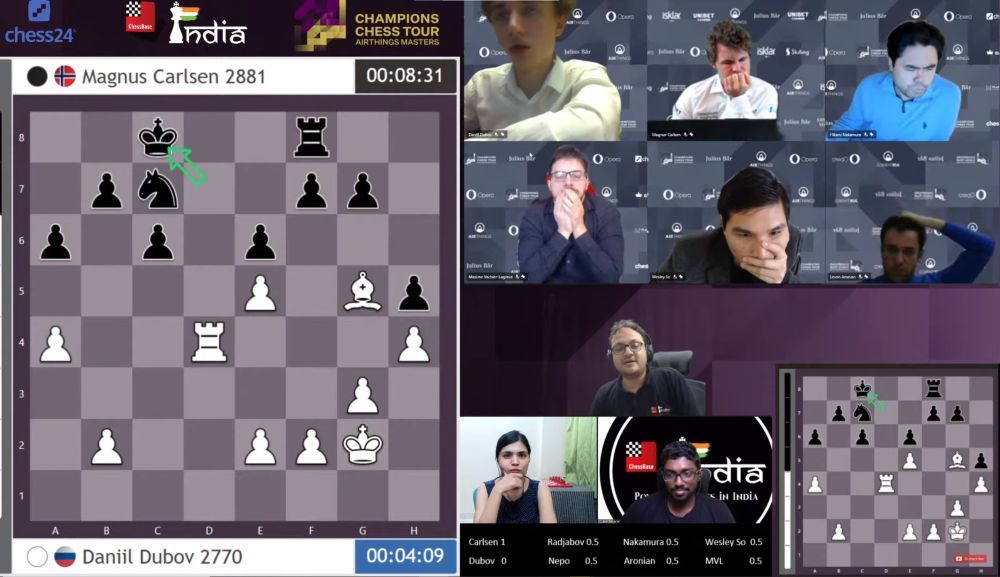 Find out how white could have tried to increase his advantage after 34...Kc8. Dubov's advantage evaporated and Carlsen managed to salvage a draw without much difficulty.

Dubov struck back in game 3 as he capitalized on Carlsen's erroneous decision of grabbing a pawn in the endgame. 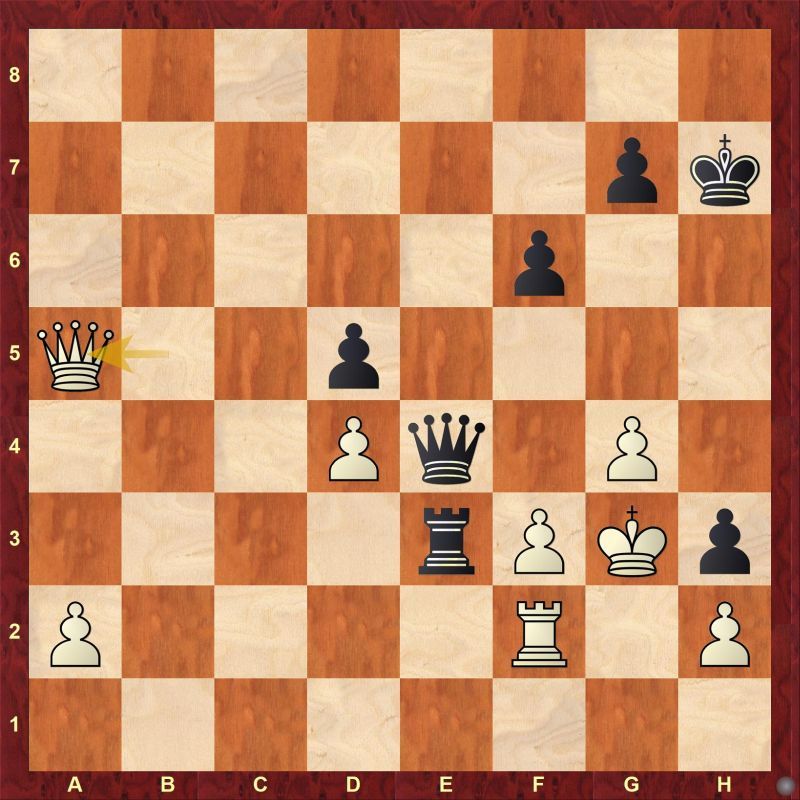 Find out why 31.Qxa5 is a blunder and what white should have done instead.

The fourth game was a quiet draw and thus the first set ended up in 2-2 draw.

The first game was an uneventful draw. The second game was however a spectacular one. The Najdorf specialist Vachier-Lagrave whipped up his magic in the second game. 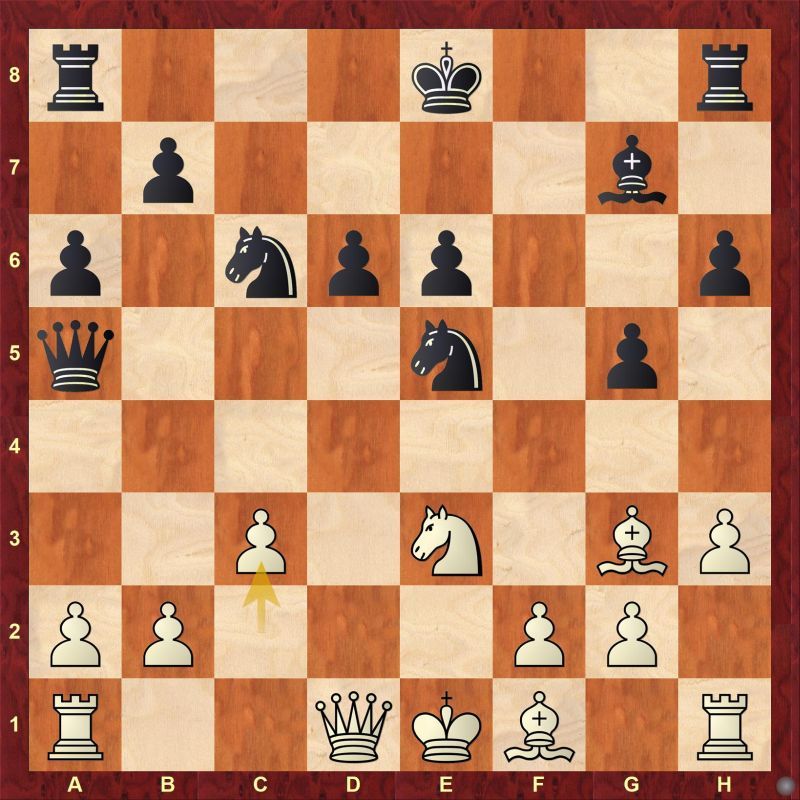 Computer might say 18.c3 is the best move here, however if you can think like Vachier-Lagrave then you will figure it out that it results in a very uncomfortable position for white. 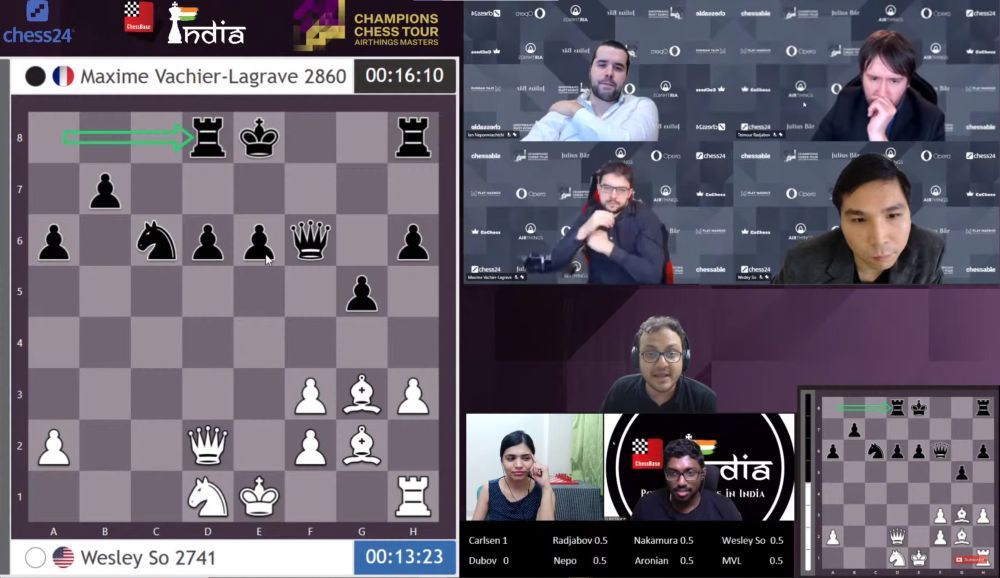 How do you think white should continue after 23...Rd8 ? A lot of inaccuracies eventually cost white the game.

The third game was a quiet draw. So went wrong early in the opening in the fourth game. 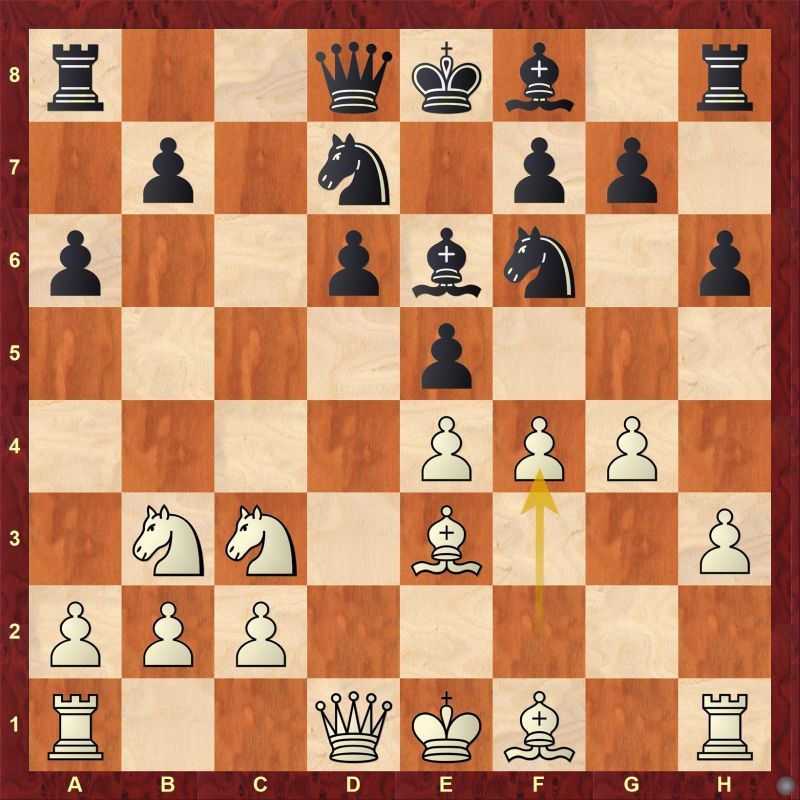 Find out why 12.f4 is incorrect and what white could have played instead? Things just went slowly out of hand and eventually white lost the game. Thus Vachier-Lagrave won the first set 3-1 against So.

Mindboggling calculations in the Sicilian Najdorf | So vs MVL | Video: Sagar Shah

The first game was a quiet draw. The second game was a positional masterpiece by Aronian. The Armenian played a model game on how to convert positional advantage into a win. 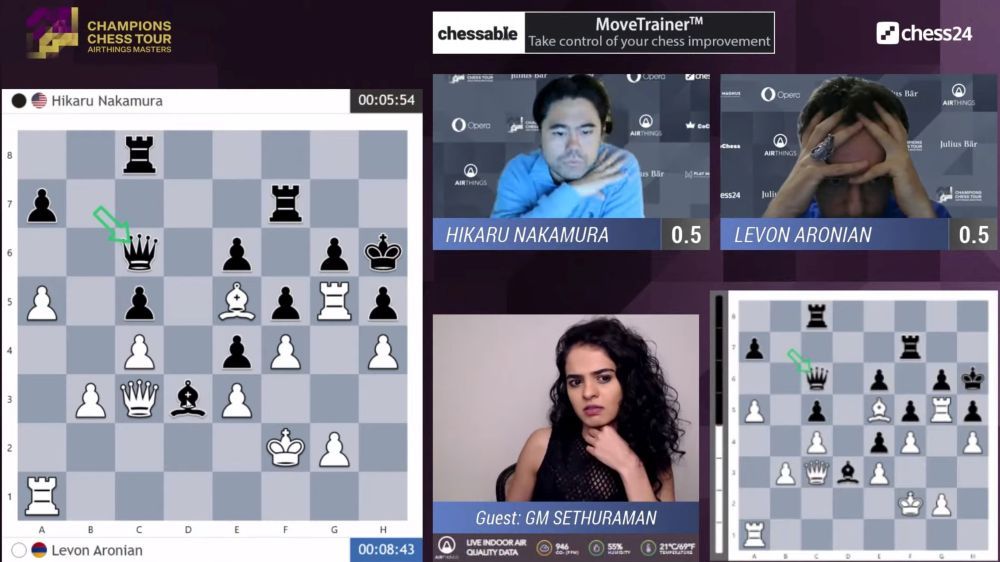 It is evident that white is the one who is in complete control. Find out the correct plan for white. 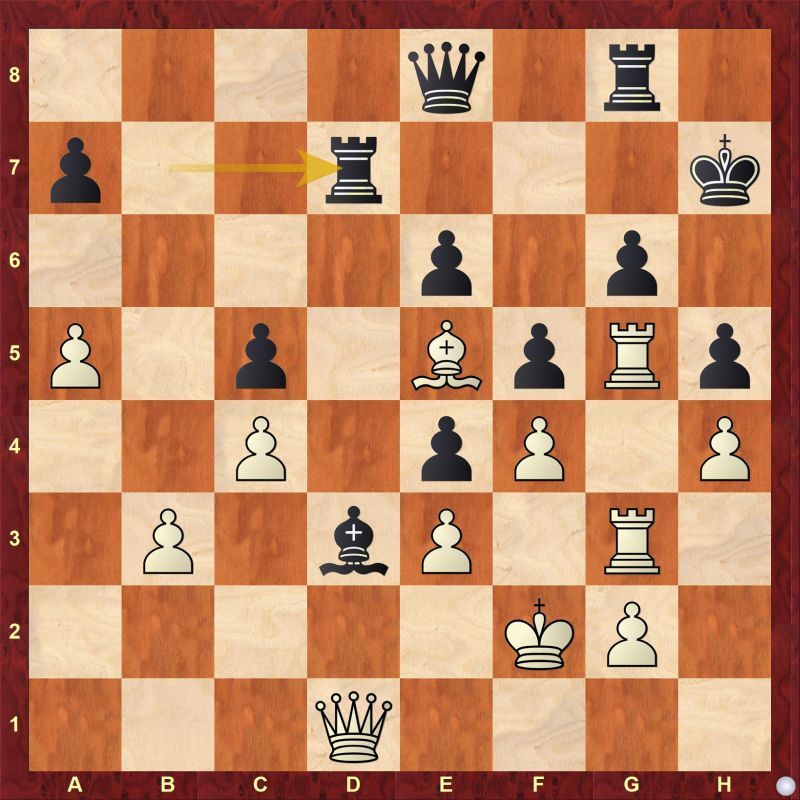 It was not completely over for black, however 30...Rd7 was a blunder. Find out why and what black should have played instead.

The third game was another draw. Aronian had complete advantage in the final position against Nakamura but much to everyone's surprise, the game ended up in a draw. 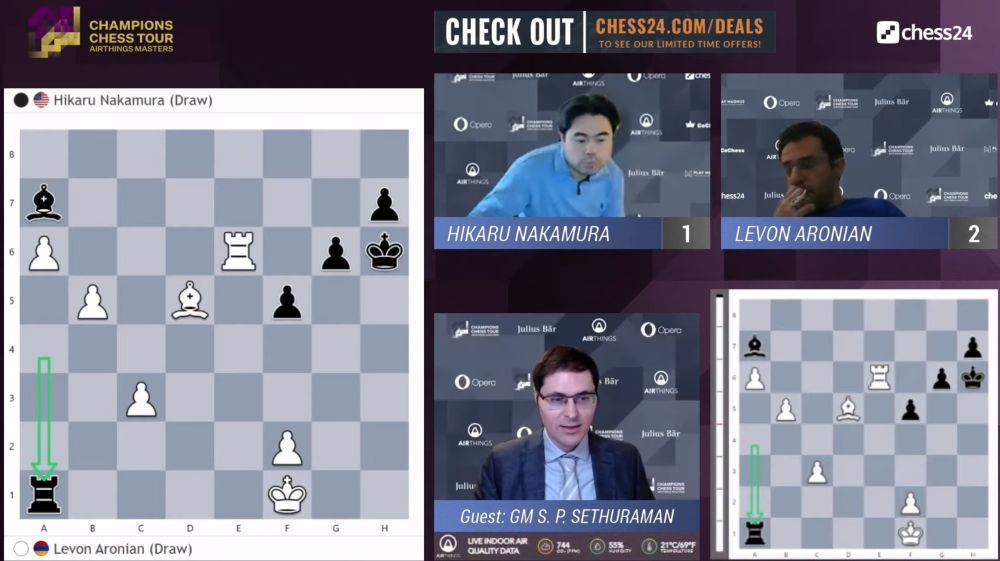 If anyone who could have pushed for a win in this position, it would have to be white. I guess since Aronian was winning the first set anyway with a draw, he didn't want to push further. 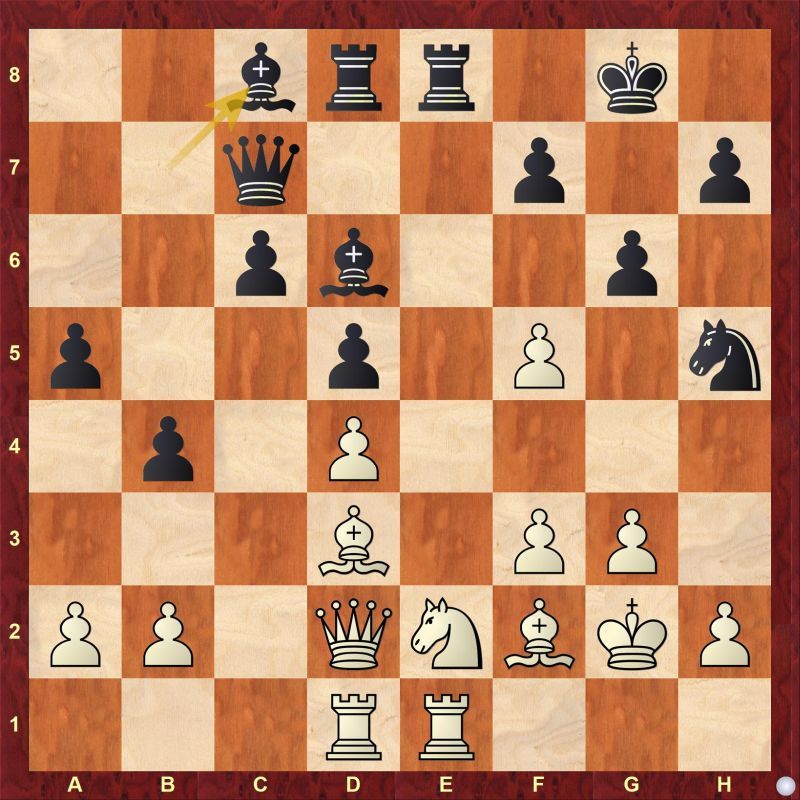 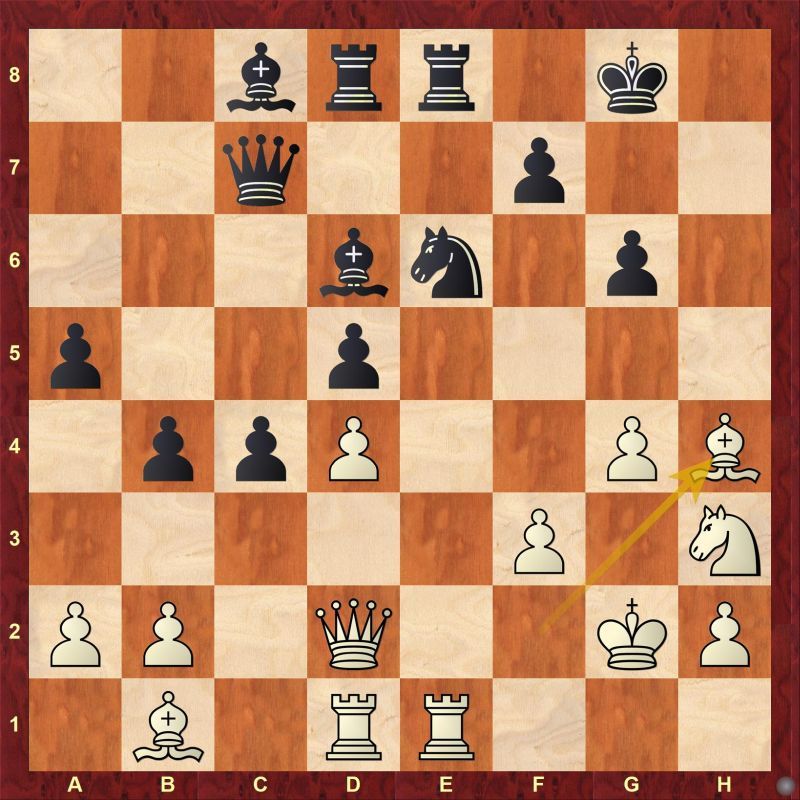 Black needed to take the initiative on the kingisde and go with 29...Kg7. Taking the exchange with 30.Bxd8 is certainly bad for white as the d8-rook is harmless and white loses an important defender on the kingside.

The second and third game was a lackluster draw. The fourth game was a hard fought draw. However Radjabov had a decent chance in the endgame. 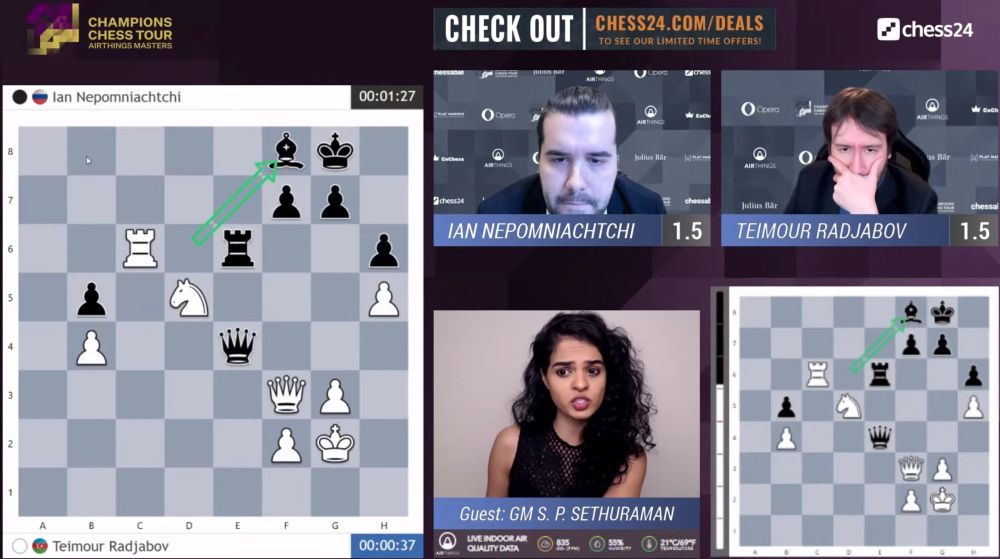 The position definitely seems to be better for white. How should white continue after 40...Bf8 ? With this draw, all four games between Radjabov and Nepomniachtchi in the first set of the Quarter-Finals ended up in draws. 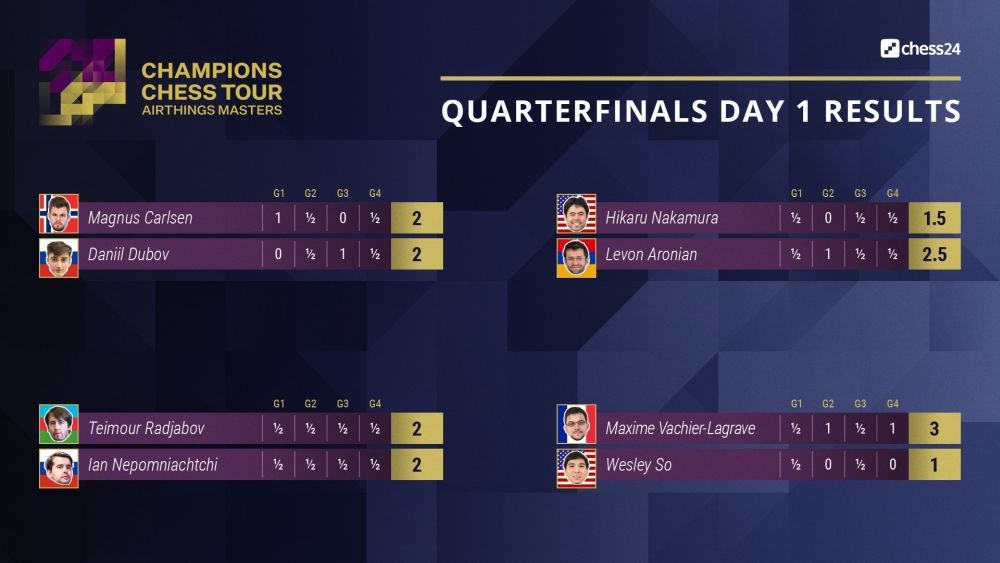 Nakamura and So are in a must-win situation | Photo: Champions Chess Tour