Radjabov halted Dubov's fantastic momentum of the previous day as he beat him 3-1 in the first set of Champions Chess Tour Airthings Masters Semi-Finals. In all four games Dubov did not get any good opportunity against the 2019 FIDE World Cup winner. Aronian struck first against Vachier-Lagrave and then he made two draws after missing a winning chance in the second game. The French man could not salvage a draw in the fourth game after the Armenian blundered in the endgame. Second set of Semi-Finals will continue tonight Friday 1st January from 7:30 p.m. IST. Watch the live stream on ChessBase India youtube channel with IM Sagar Shah, Amruta Mokal and IM Soumya Swaminathan. Photo: ChessBase India Live stream

Dubov and Vachier-Lagrave in a must-win situation

Radjabov turned out to be the better player against Dubov in the first set of the Semi-Final. After making two solid draws, Radjabov struck first as Dubov made the final mistake in the endgame which cost him the point. In the next game, Dubov's dubious sacrifice did not work and he refused to settle for a draw, eventually losing his second consecutive game. Meanwhile Aronian won the first game, drew the next two and won the last one. Although he was winning in the second game. So Dubov and Vachier-Lagrave must win the second set today to keep their chances to make it to the Finals alive.

First two games were a solid draw. In the third game, Dubov made a dubious move and gave up control of a key square. 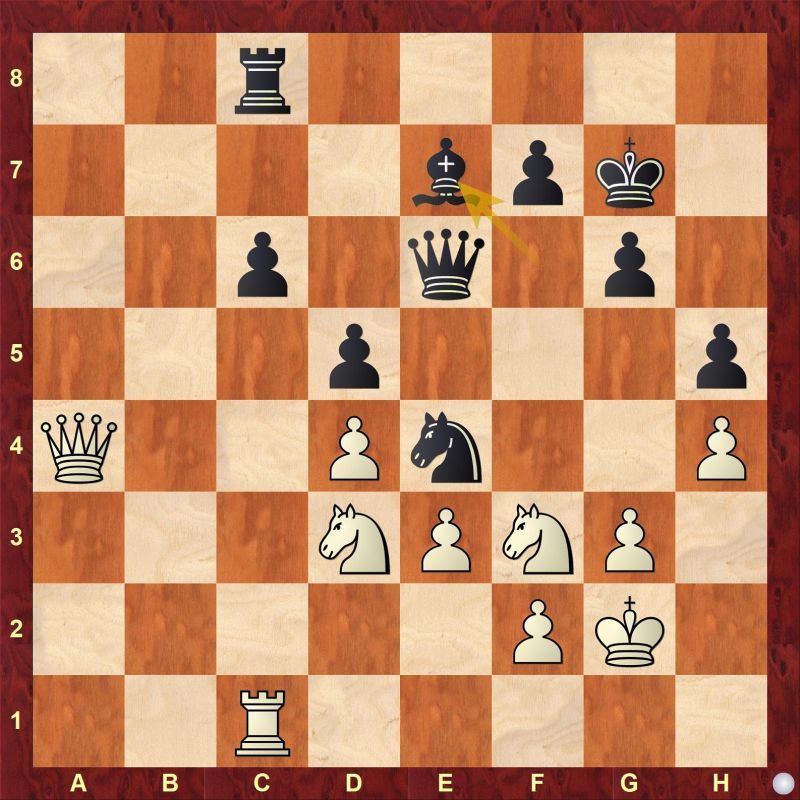 Somehow voluntarily giving up control of the e5-square with 36...Be7 doesn't seem to be the correct idea. Dubov managed to recover the lost pawn but then again he made a tactical error which cost him another pawn and eventually the game.

Dubov made an inaccurate sacrifice which would have allowed Radjabov to gain decisive advantage but he did not play it accurately. 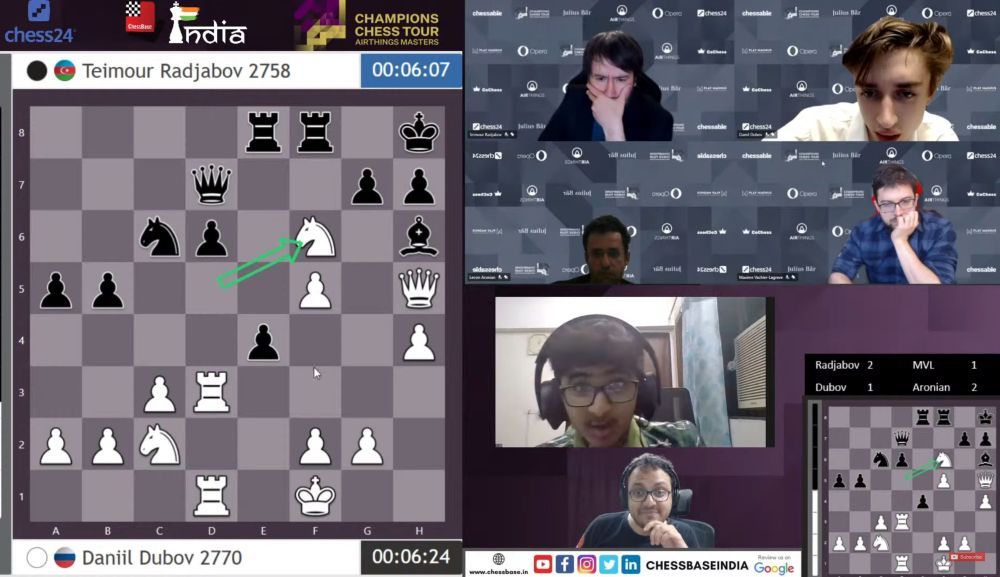 Dubov was already behind in the first set, so he tried to take his chances with 23.Nxf6 as both draw or loss meant him losing the first set anyway. 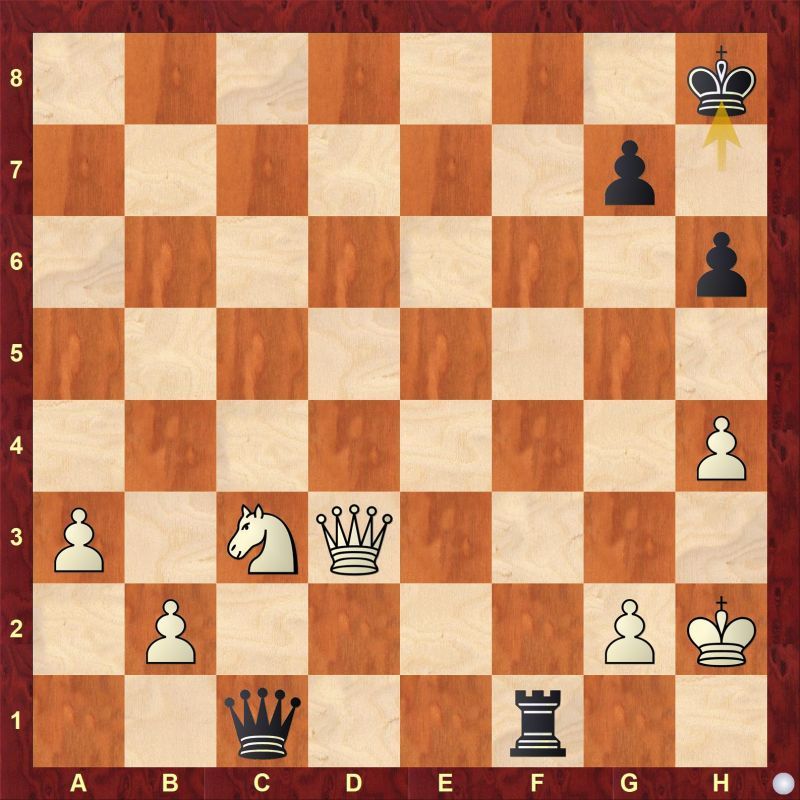 Dubov could have easily repeated moves and made a draw here, but he is not the kind who will settle for a draw especially when it's pointless. He kept going and eventually lost the game.

What a way to end 2020! Dubov vs Radjabov | Non-stop commentary | Video: ChessBase India

Aronian opted for the Berlin in the first game. Vachier-Lagrave made a subtle mistake in the endgame. 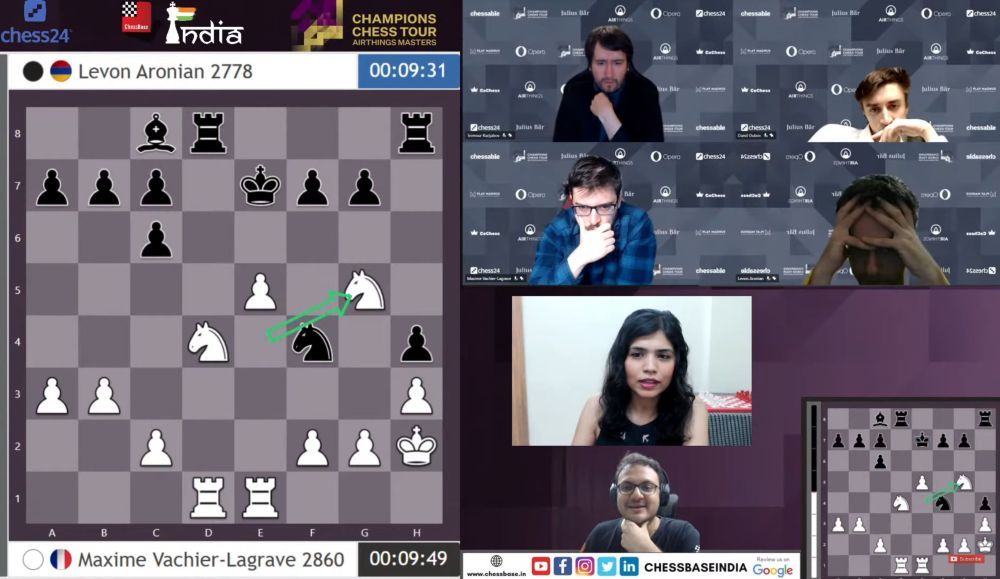 At a first glance, 23.Ng5 seems to be okay. Only if you look deeper you will realize why it is not the best move in the position. Instead white could have gone with 23.Nc5 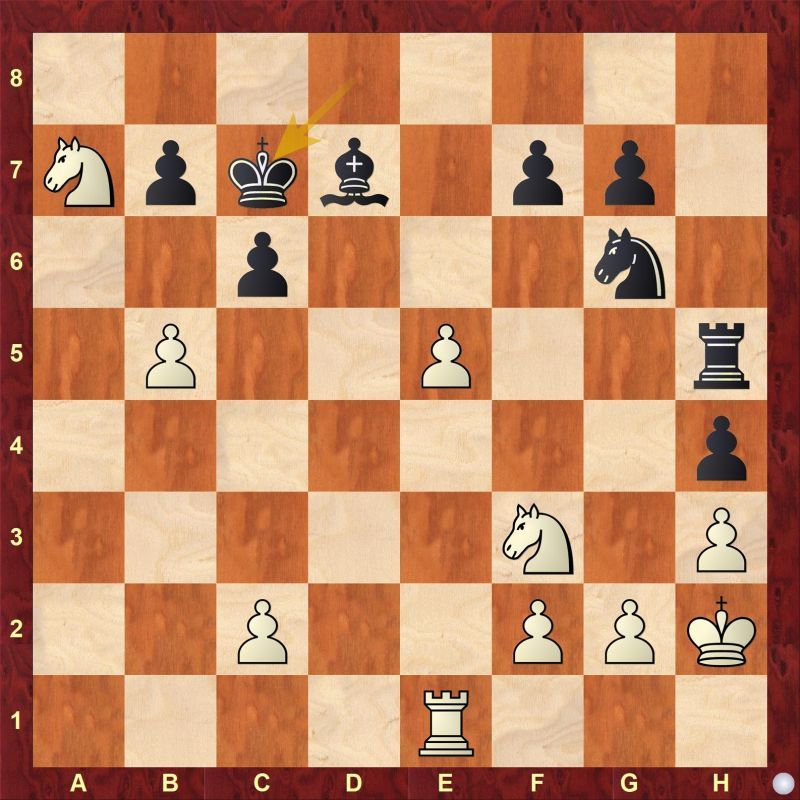 White's knight on a7 is on the brink of getting trapped. Is there a way for white to save it? If yes then find out how. The French no.1 eventually lost the knight and the game.

Aronian was completely winning against Vachier-Lagrave in the endgame. 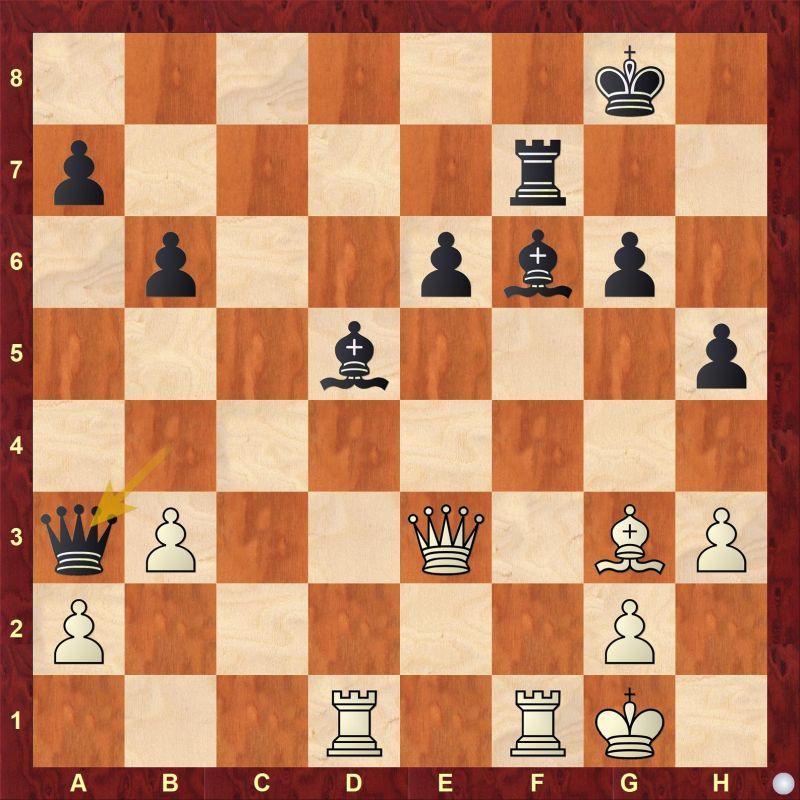 Having less than 15 seconds left on the clock, it was not easy for white to find the winning continuation after 32...Qa3. Try to find it. 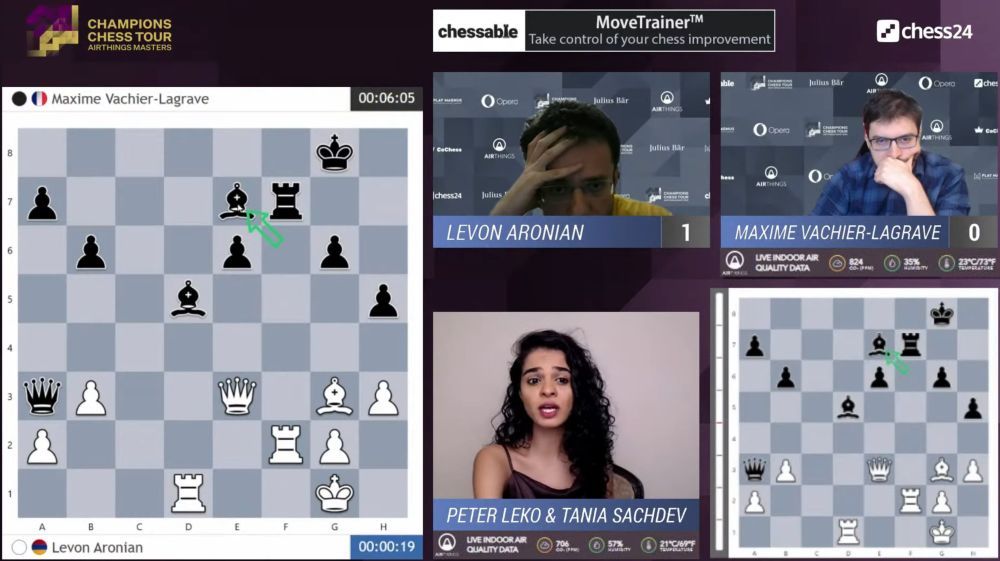 However, after 33...Be7, there was a much easier win for white. Dubov managed to salvage a draw after white missed his second winning chance in the game.

Aronian was in a bit of a pickle in the third game, however Vachier-Lagrave was unable to find anything out of it. 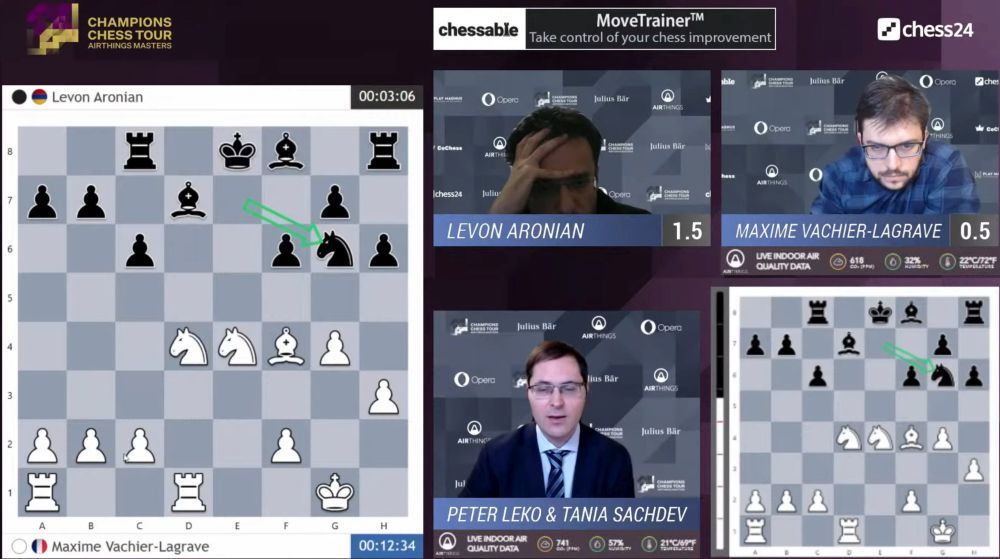 It seemed like white is better here but realizing the advantage was not that easy, especially when the opposition was Aronian.

Aronian was completely winning in the fourth game but then he blundered a piece and tried to salvage a draw. However, Vachier-Lagrave misplayed from a seemingly equal position, lost the game and the first set too. 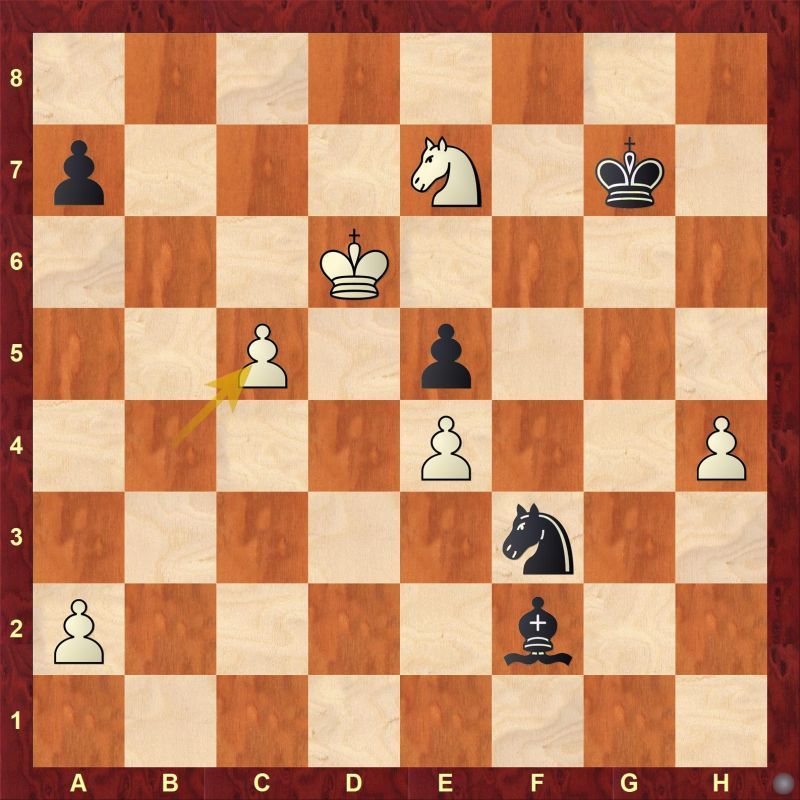 Find out the correct way for black to salvage a draw after 52.bxc5 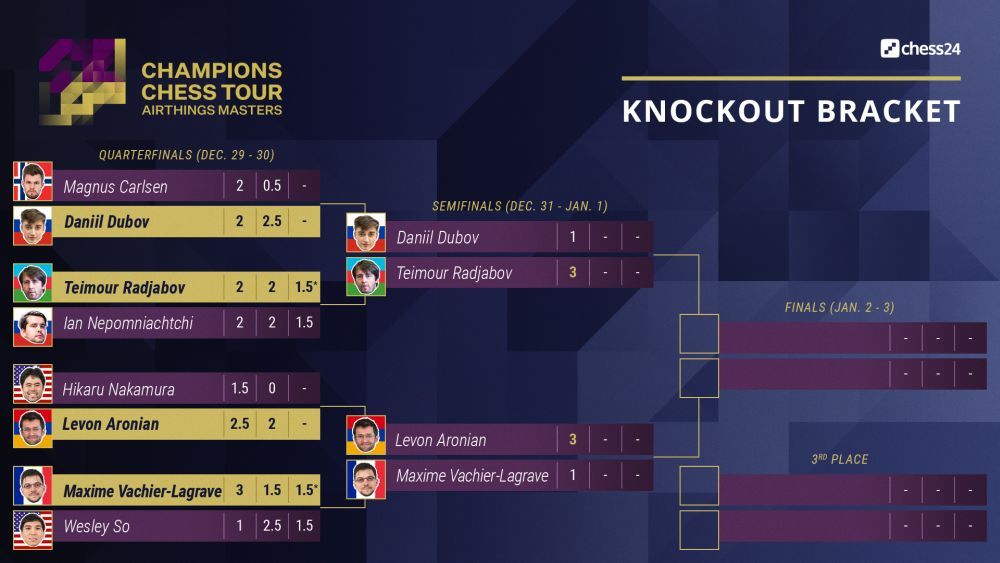 Dubov and Vachier-Lagrave are in a must-win situation | Photo: Champions Chess Tour