If the recent over-the-board encounter between Mamedyarov and Carlsen left you unsatiated and kept you wanting for more, fret not, they had a slobber-knocker of a match in the second round of Meltwater Champions Chess Tour Finals. After six decisive games, Carlsen defeated Mamedyarov in Armageddon to win the match. Vachier-Lagrave lived up to his proclamation and dominated So by winning the match in just three games. Duda and Aronian defeated Giri and Artemiev by 2.5-1.5 each respectively without the need of tie-breaks. Nakamura got the better of Radjabov in Blitz tie-breaks. Round 3 starts tonight at 8:30 p.m. IST. Photo: C&P Media/Chess Federation of Macedonia

The most exciting match of round 2 was between Carlsen and Mamedyarov as there were plethora of human errors which caused seven decisive games. Neither of them held back anything, thus they did not have a single draw. Carlsen extended his lead by six points, he is now at 21.5 points, followed by So 15.5 points and Aronian 12 points. 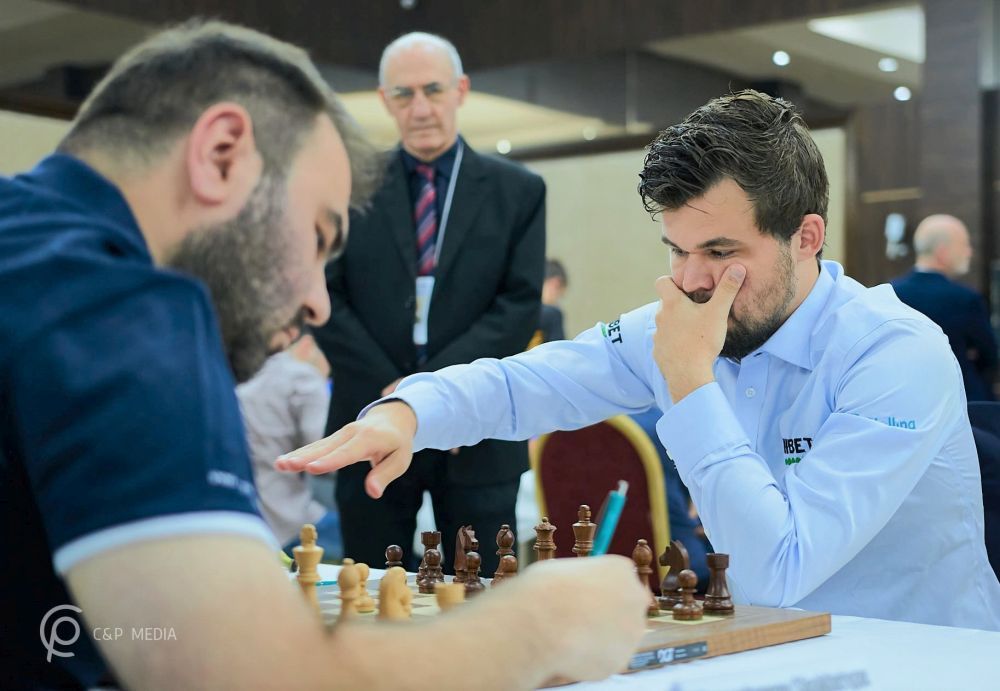 Carlsen and Mamedyarov continued where they left at the recently concluded European Club Cup 2021 | Photo: C&P Media/Chess Federation of Macedonia

Giri once again started the day with a loss. 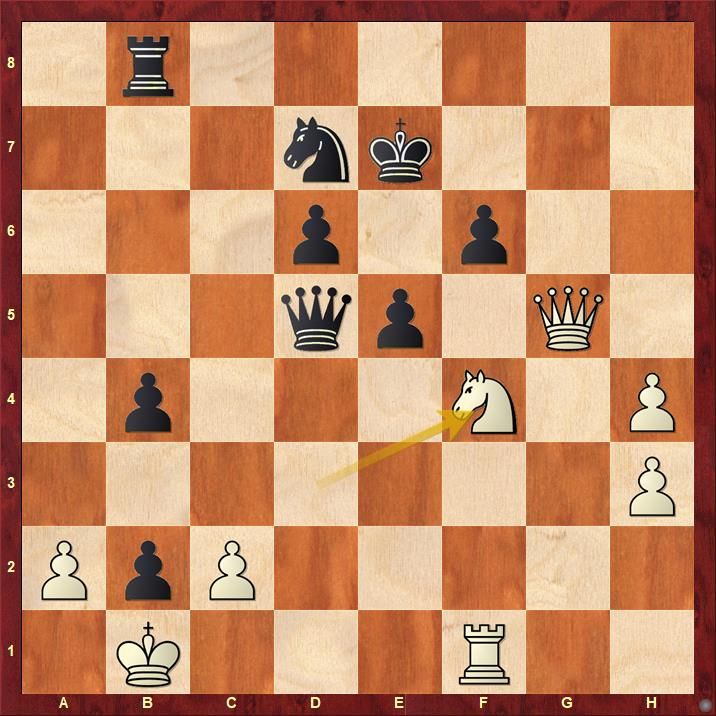 In a double-edged position, White went for 33.Nf4 which turned things in Black's favor as 33...Qc4 attacks all three White's pieces - queen, rook and knight. 34.Qg7+ Kd8 35.Nd3 White may have managed to save all three pieces momentarily, however the same cannot be said for the position. Duda went on to win the game and took a 0-1 lead.

Giri immediately struck in the second game to level the score 1-1.

The third game ended in a draw, although in the endgame, it looked like Duda might have a slight edge. Score is still level 1.5-1.5.

A mistake in the endgame cost Giri the fourth game and the match. 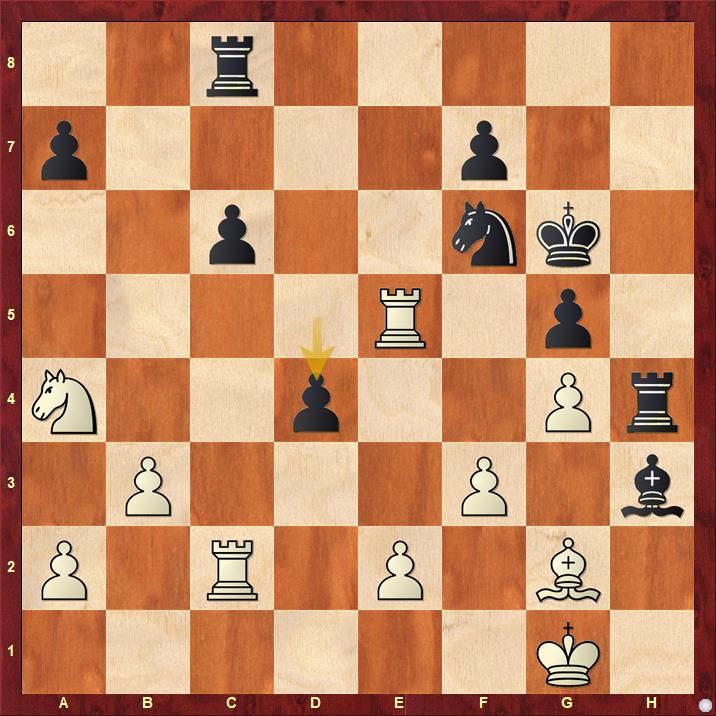 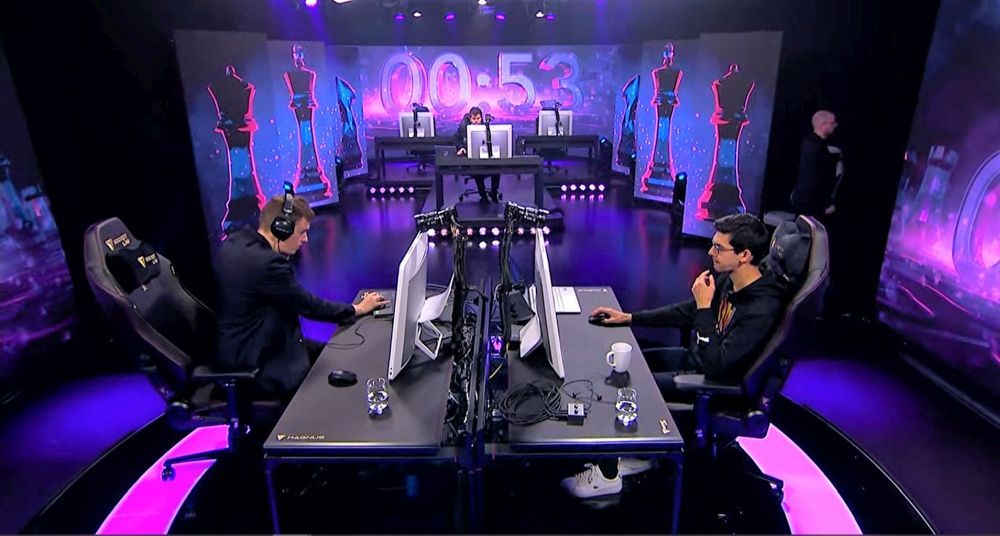 Nakamura and Radjabov made quick draws in all four of their rapid games. The first blitz tie-break was won by Nakamura after the Azerbaijan no.1 made a series of mistakes in the endgame. 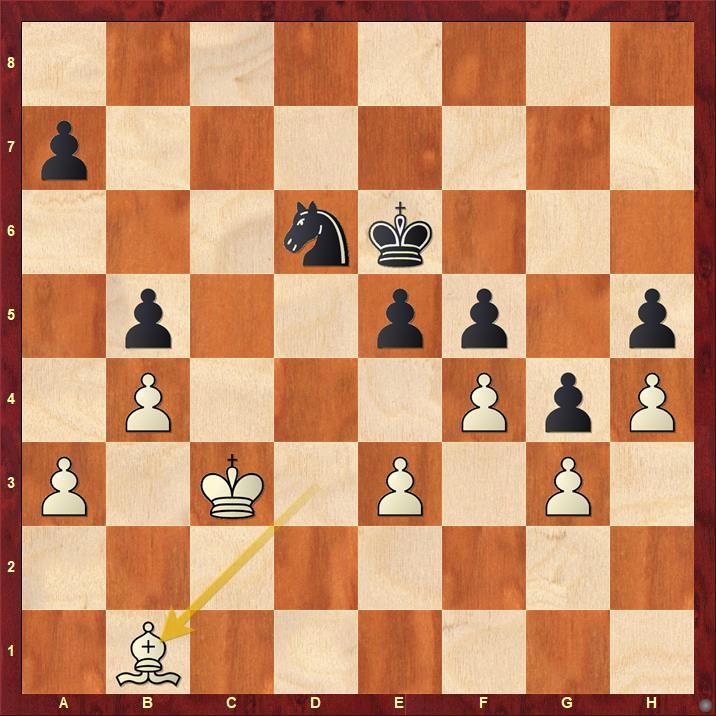 The second tie-break was a well-fought draw which means Nakamura won the match and got 2 points, Radjabov got 1 point.

Aronian won the first game although Artemiev at one point could have completely turned things in his favor. 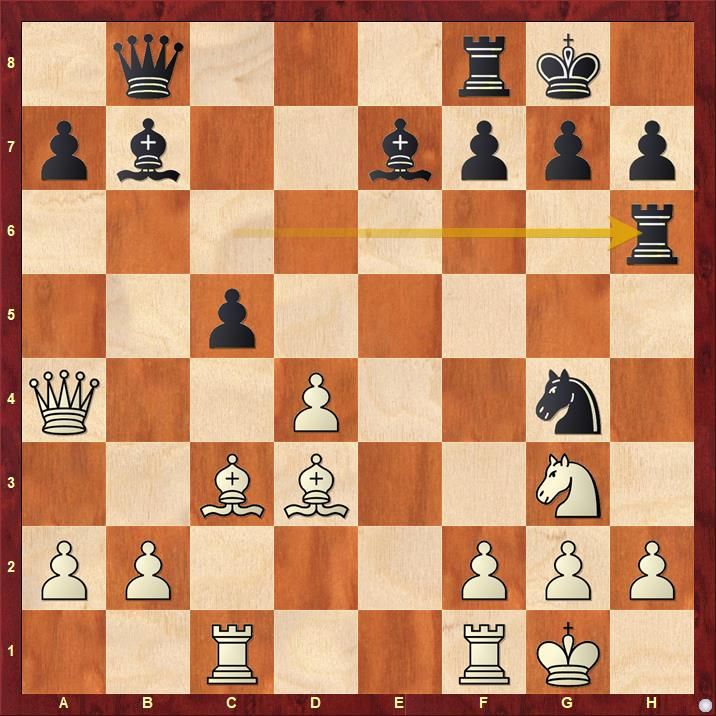 19.dxc5 could have made things go in White's way as 19...Nxh2 is met with 20.Be5. There is no good way to continue for Black. White opted for 19.Qd7 fork but 19...Rxh2 had a deadly threat on g2 which prevented White from taking either of the minor pieces on e7 or g4. Aronian eventually turned things around and won the game.

Artemiev made an immediate comeback by winning the second game. 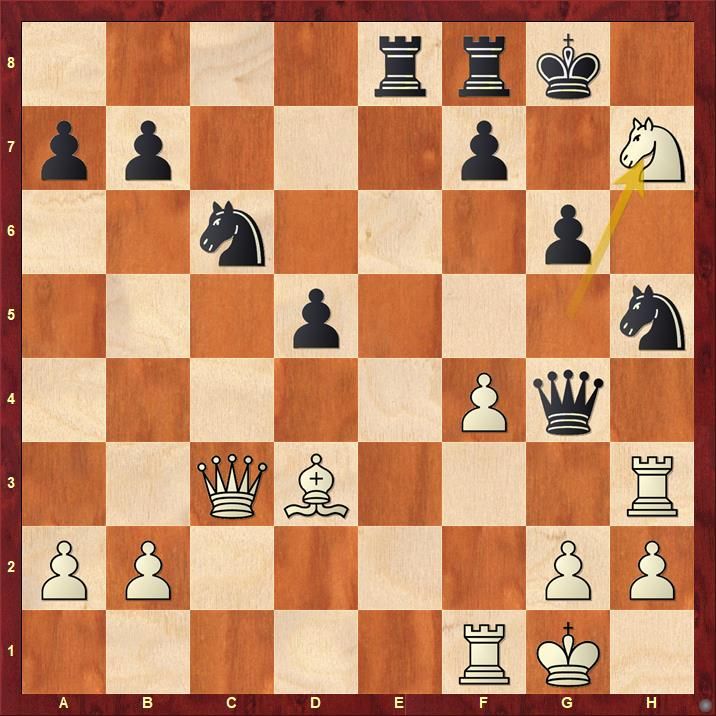 Artemiev seemed much better at one point, however the third game ended in a draw.

Aronian won the fourth game after Artemiev made a positional error in a queenless middlegame. 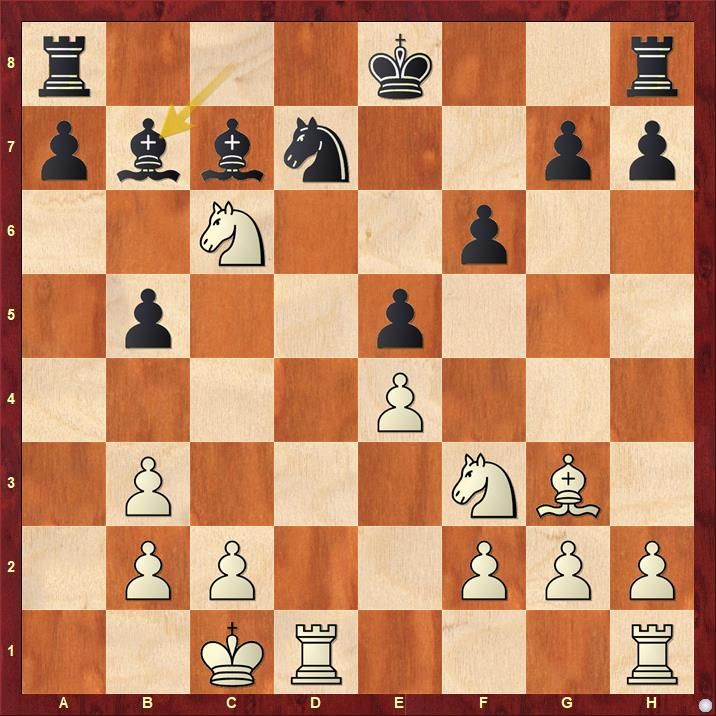 16...Nc5 and things would have been fine for Black. Find out why 16...Bb7 is a mistake. Artemiev lost the game and the match which means Aronian got 3 points and Artemiev got 0.

Vachier-Lagrave started his day with a win over So. 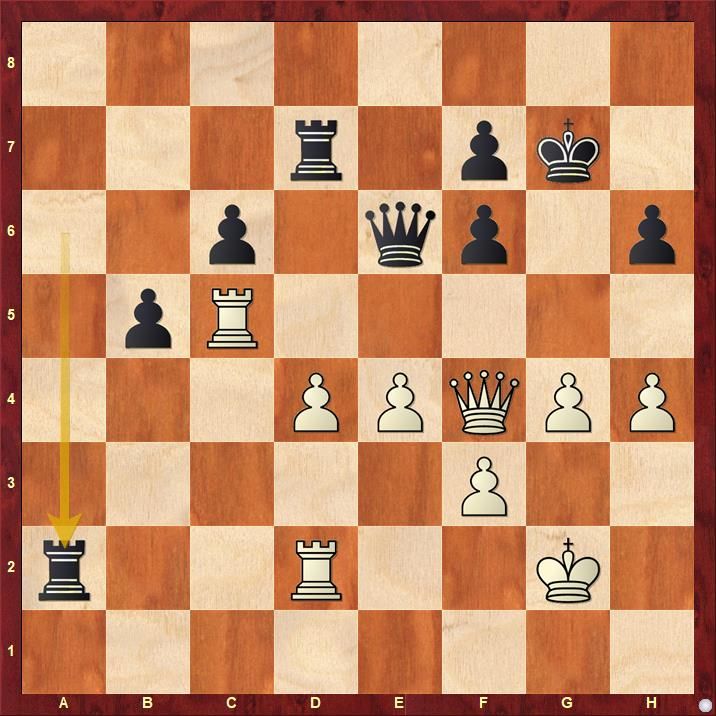 Black needed to play either 42...Ra8 or Qd6 to be prepared to defend the h6-pawn. 42...Ra2 caught Black off-guard as 43.Rh5 dropped the important h6-pawn which cost Black the game.

The second game was a well-contested draw which means Vachier-Lagrave is still in the lead 1.5-0.5. The Frenchman won the fourth game and thus the match by minimum number of games 2.5-0.5. MVL got 3 points and So got none. 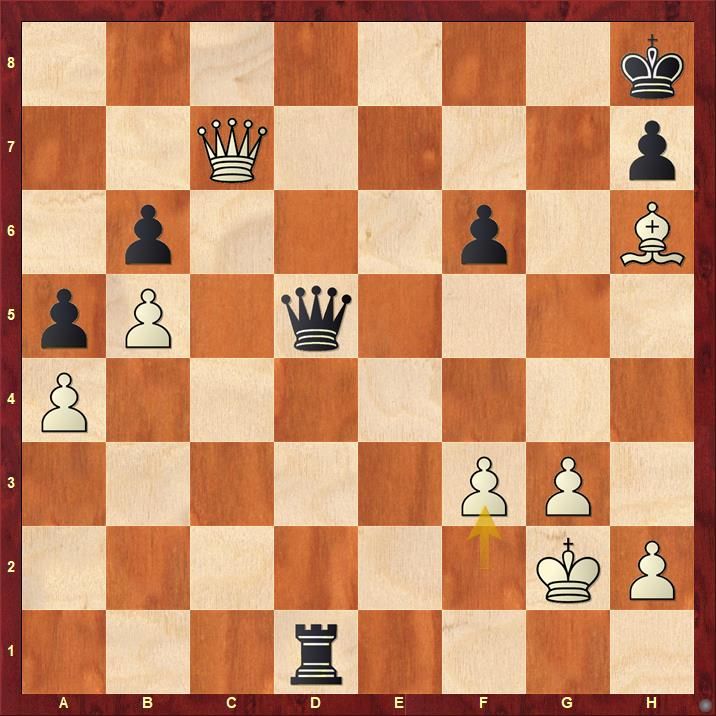 Black made the mistake of giving a check at a2 as 38...Qa2+ 39.Kh3 Qe6+ 40.g4 and the checks are stopped which means now White will take advantage of Black's back-rank weakness. Find out what Black should have done in the above position to save the game.

Mamedyarov started his day with a victory over the world champion. 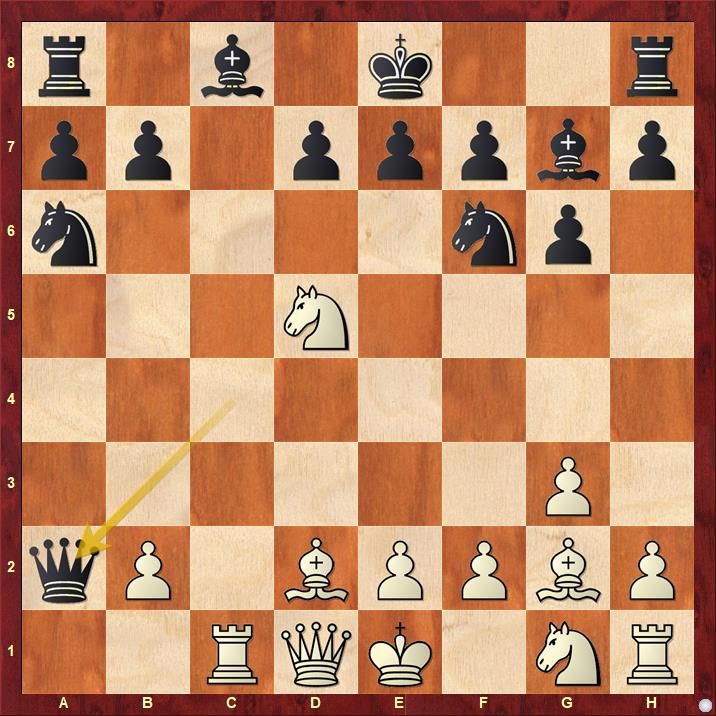 Carlsen went wrong early in the opening as he went to capture an almost poisoned pawn 9...Qxa2. Mamedyarov seized his opportunity 10.Ra1 Qc4 11.Ra4 Qc5 and Black lost a knight, 12.Nxf6+ Bxf6 13.Rxa6 bxa6 14.Bxa8 and White got a completely winning position which he converted with ease to take a 0-1 lead.

Mamedyarov capitalized on Carlsen's mistake in the endgame to once again get back in the lead, 1-2. 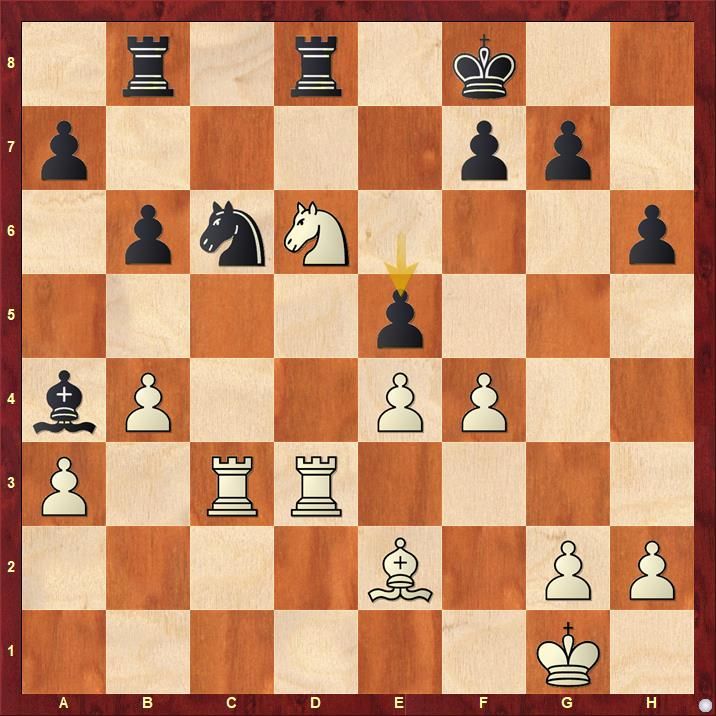 Carlsen managed to win the fourth game to force Blitz tie-breaks, although Mamedyarov had an opportunity to equalize in the endgame.

The world champion won the first Blitz game, which had a few mutual errors. 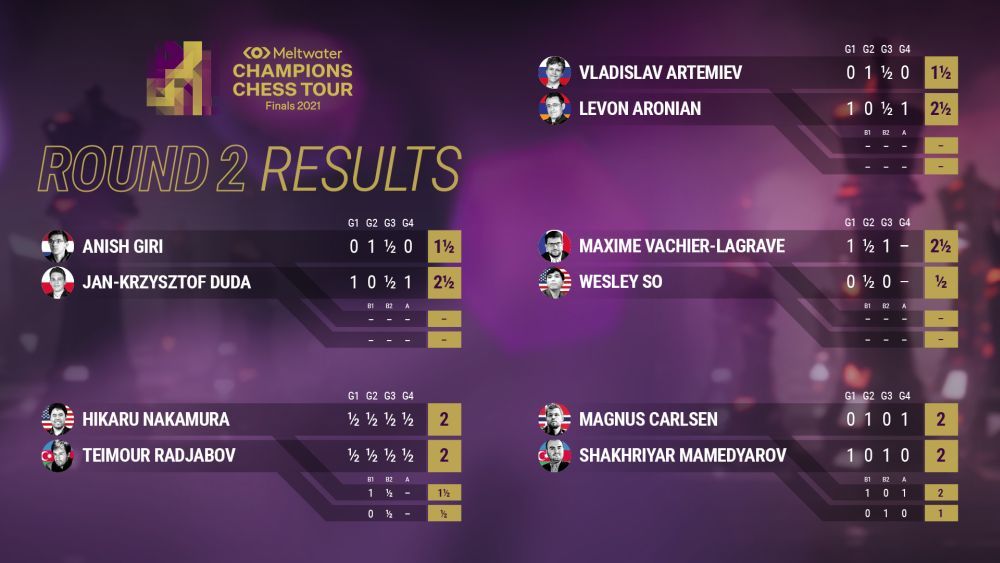 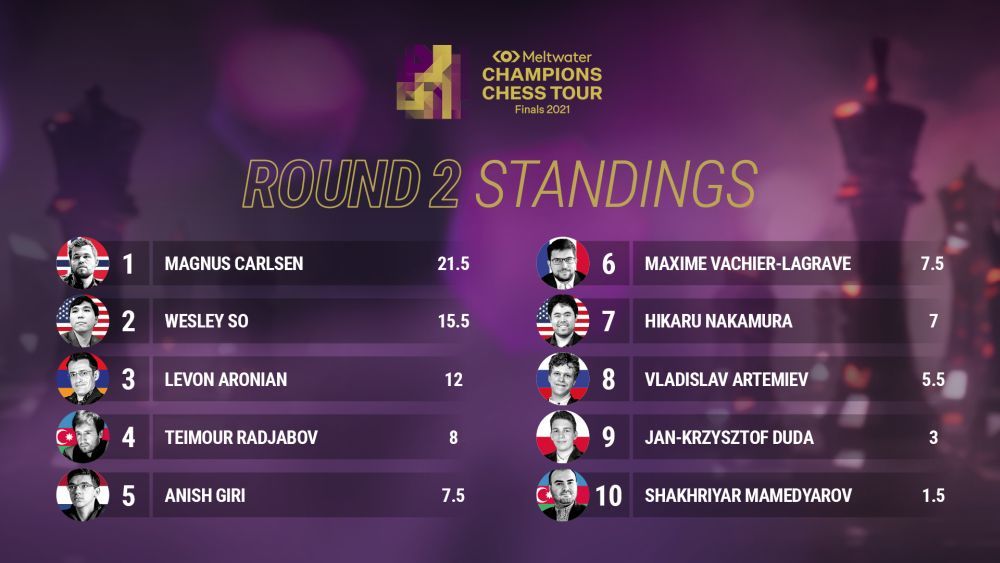