Carlsen was once against brought to his limit by his 'Kryptonite' Dubov. The former world rapid champion won two consecutive games in the second set to force tie-breaks. Once again he won on demand but lost the Armageddon and did not have another fairytale ending. The in-form Vachier-Lagrave drew the second set 2-2 against Aronian to advance to the Semi-Finals. Radjabov-Giri made five consecutive draws before the Airthings Masters winner beat Giri to advance to the next stage. Semi-Finals will start tonight from 9:30 p.m. IST. Carlsen will face Vachier-Lagrave and So will go against Radjabov. Catch the live stream with IM Sagar Shah and Amruta Mokal on our youtube channel. Photo: chess24 Live stream

How many players can you name who has beaten Carlsen three times in a single day in recent times? Except Dubov you cannot find any other name. Of course online bullet and hyper-bullet matches are not being counted because they are barely a proper chess. Dubov, Duda, Firouzja and So - only these four players have repeatedly showed that they can beat the world champion in any format. Despite losing the first set, Dubov started the second set with a draw and then won two consecutive games and forced blitz tie-breaks. He lost the first blitz game and won the second one to force a tie-break. Unfortunately for Dubov he could not repeat his Airthings Masters result, he lost the Armageddon and got eliminated. Carlsen-Dubov match witnessed only two draws and seven decisive games. That speaks volumes about the kind of chess Dubov loves to play. 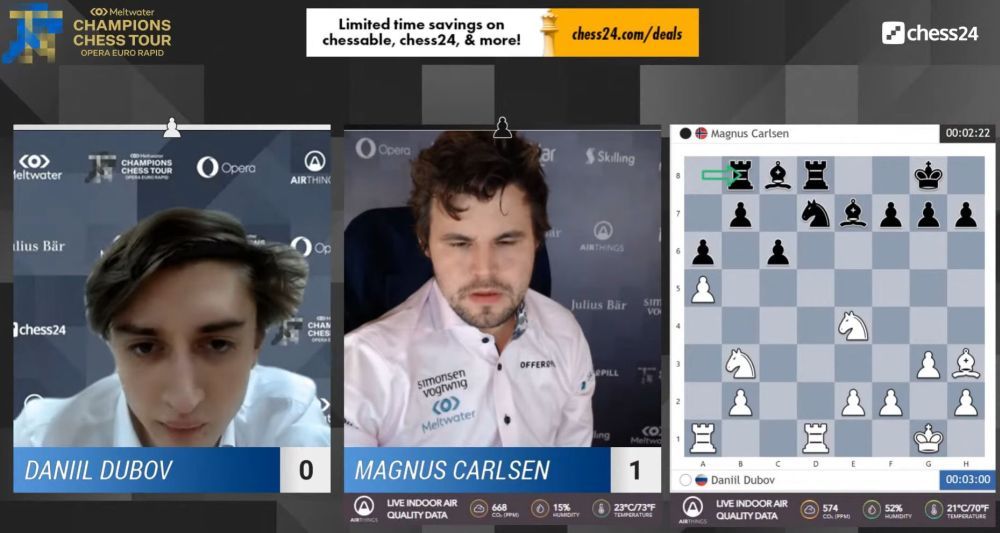 Winning against Carlsen in two consecutive games in just exact 25 moves each is something very few can claim | Photo: chess24 live stream

In the first game of the day, Carlsen played a bit uncharacteristically which gave Dubov an advantage. 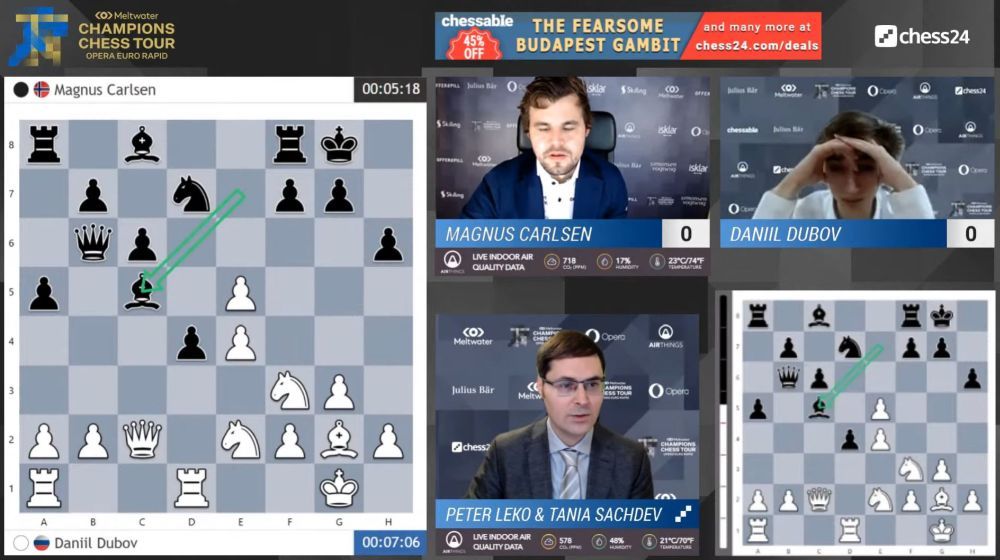 22...Bc5 makes things difficult only for black. Find out what was the better way to defend the d4-pawn and how should white continue after 22...Bc5. 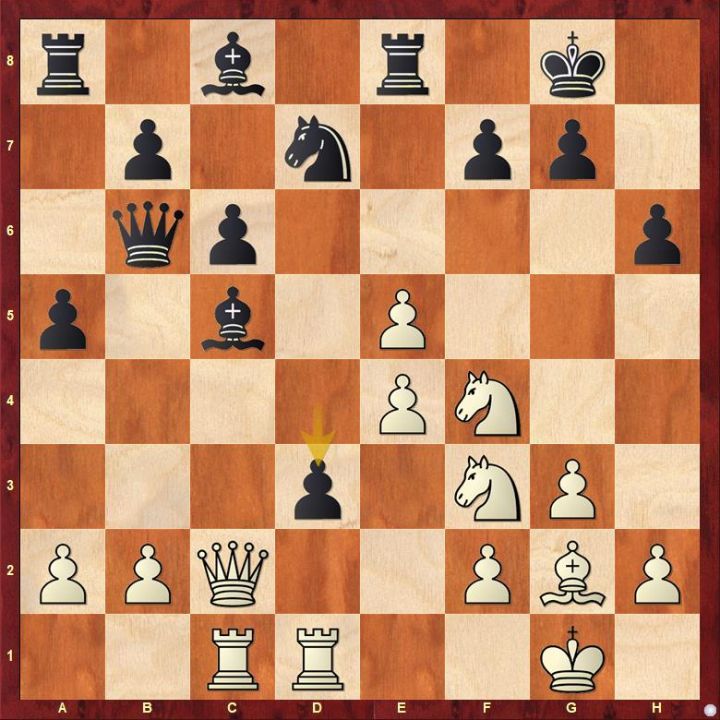 Which is the best way to take on d3? Dubov's advantage eventually evaporated and the game liquidated into an equal Queen and Bishop endgame.

Carlsen had a pretty good laugh either about the moves he made or the position but eventually landed himself in deep trouble in the second game against Dubov. 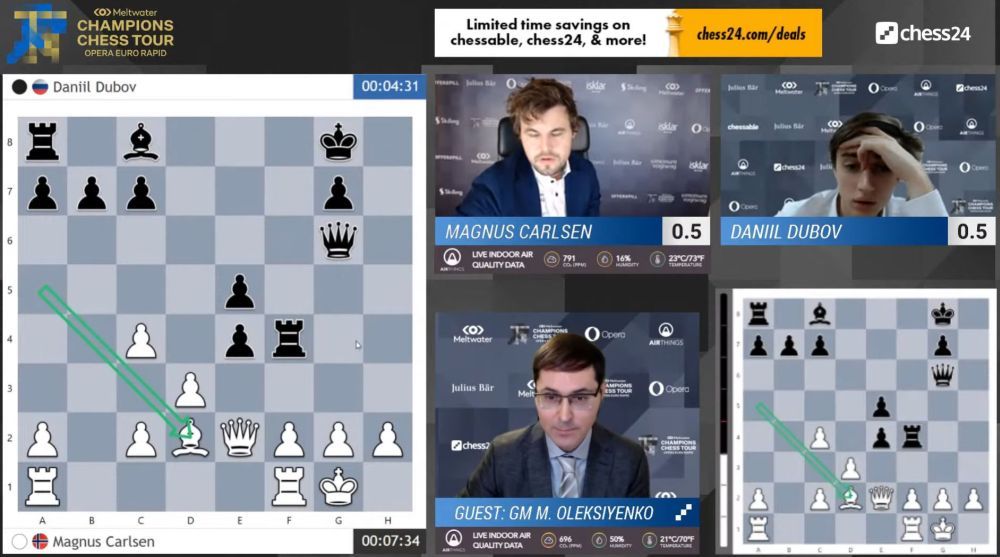 Find out why 18.Bd2 is a huge mistake. Dubov is not the kind to let go of these opportunities and he wrapped up the game in another seven moves.

Carlsen went wrong in Queen's Indian Defence and arrived at a worse position. 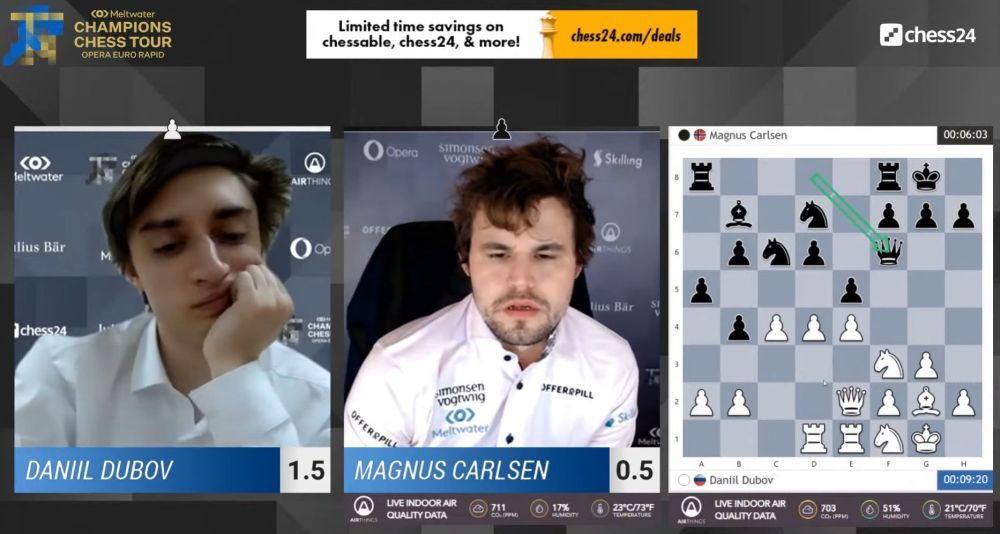 The game continuation 15.Ne3 is a good move but what was the better alternative? Soon afterwards black's position completely fell apart and lost the game in another eleven moves.

Carlsen was determined not to make a hat-trick of losses. However the world champion once again erred in the first blitz tie-break which Dubov pounced upon but could not follow through completely. 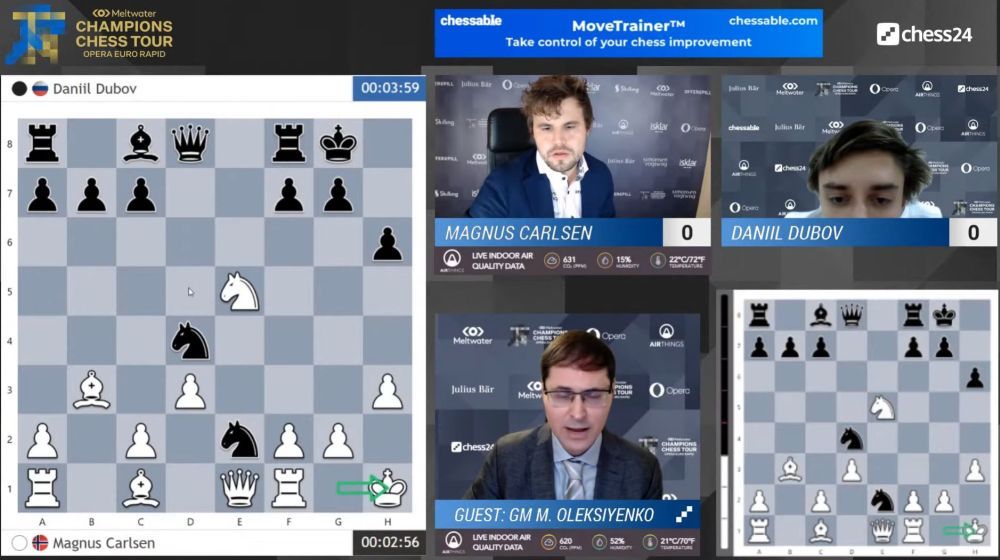 Carlsen made a big mistake with 13.Kh1. White just needed to play 13.Kh2 and everything would have been fine. Think like Dubov and try to maximize black's chances after 13.Kh1. 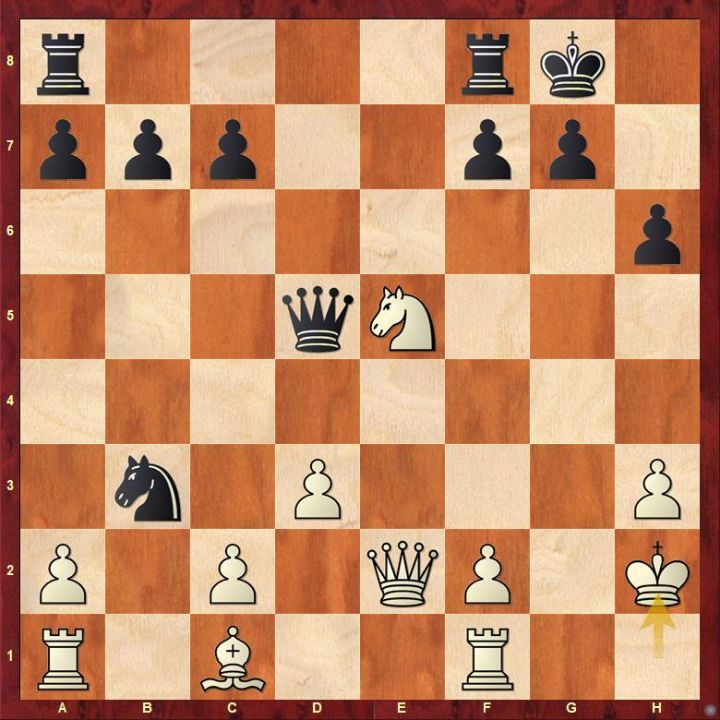 Find out the best continuation for black after 16.Kh2. Dubov missed his chance and he eventually lost the game in another twelve moves.

If you think Dubov can only play good in sharp positions, well it's time to prove you wrong because he completely outplayed the world champion with his positional play in a must-win situation.

Now white has a position which Carlsen would love to play but unfortunately this time he was on the side who has to suffer. It is true that Dubov allowed Carlsen to get back in the game but then the world champion also made a big mistake which cost him the game. 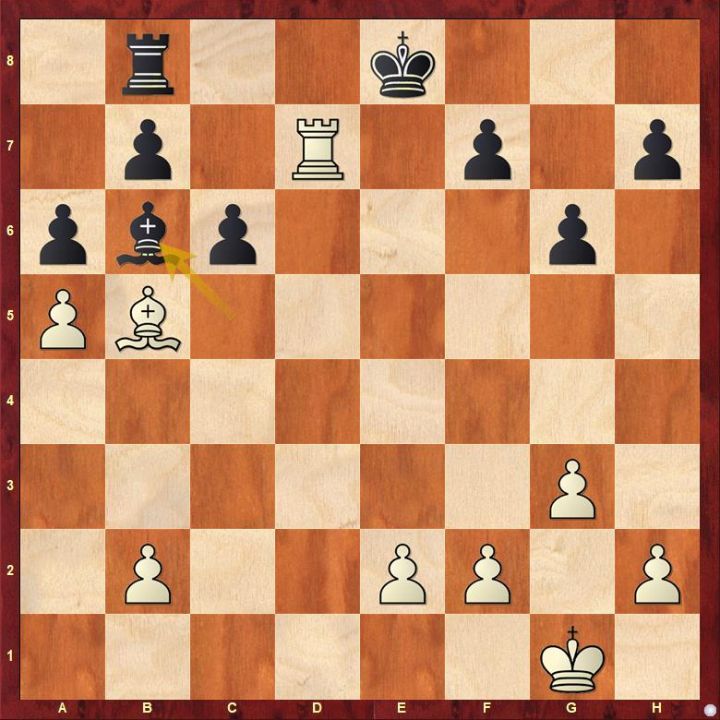 Find out why 31...Bxb6 is a mistake. The rest was just a matter of technique and there was no doubt in Dubov getting to convert it and force Armageddon.

Carlsen got the white pieces in the Armageddon which means he was in a must-win situation something that Dubov had to endure for the last few games. 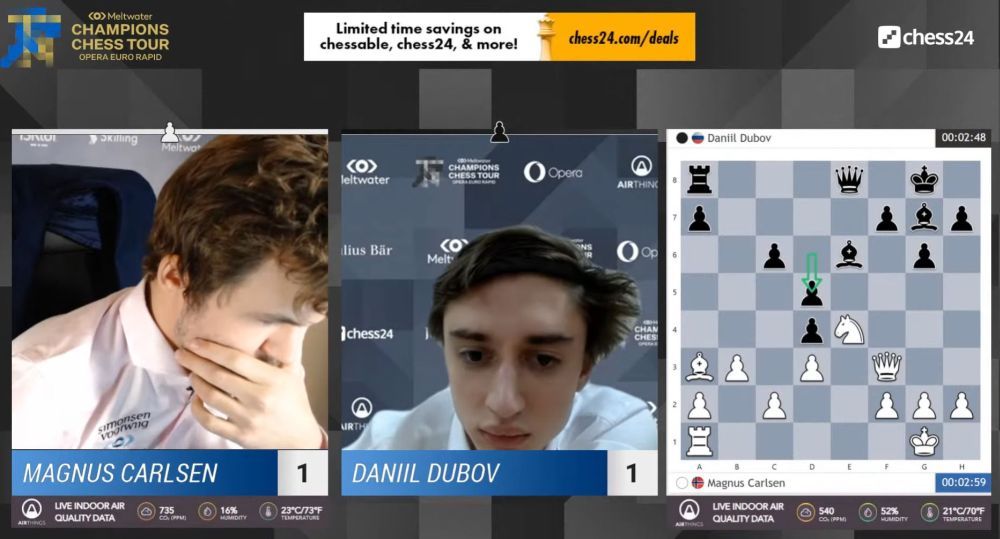 16...d5 was a big mistake because now white will go 17.Nf6+ Bxf6 18.Qxf6 and white's dark square bishop becomes a monster and there is no black piece which can challenge it. Rest was just a matter of technique for the world champion to convert into a win and advance to the Semi-Finals.

Dubov: "It’s a very bad sign for chess that my style is called unique!" | Video: chess24

Aronian got an advantageous position against Vachier-Lagrave. However instead of maintaining his attack, he exchanged the queens too soon, the attack diminished and black slowly got an opportunity to get back in the game. 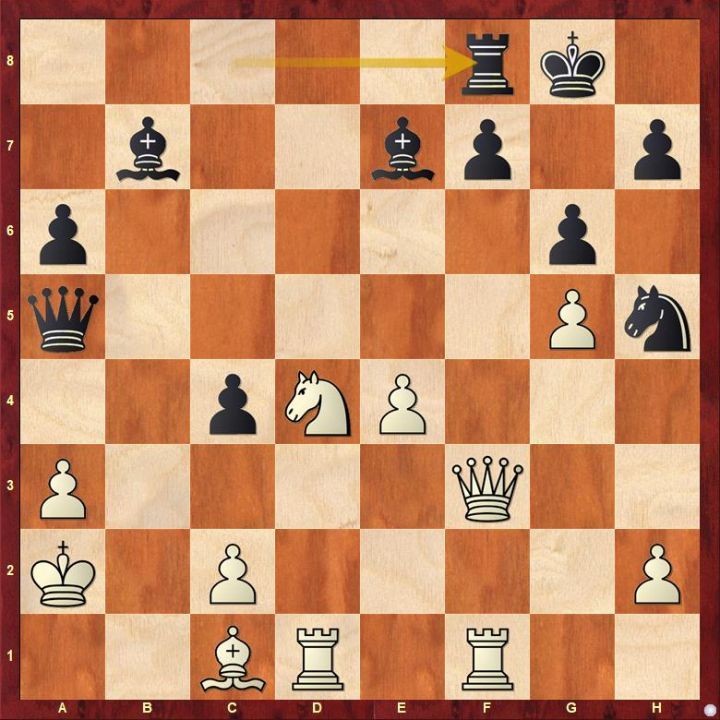 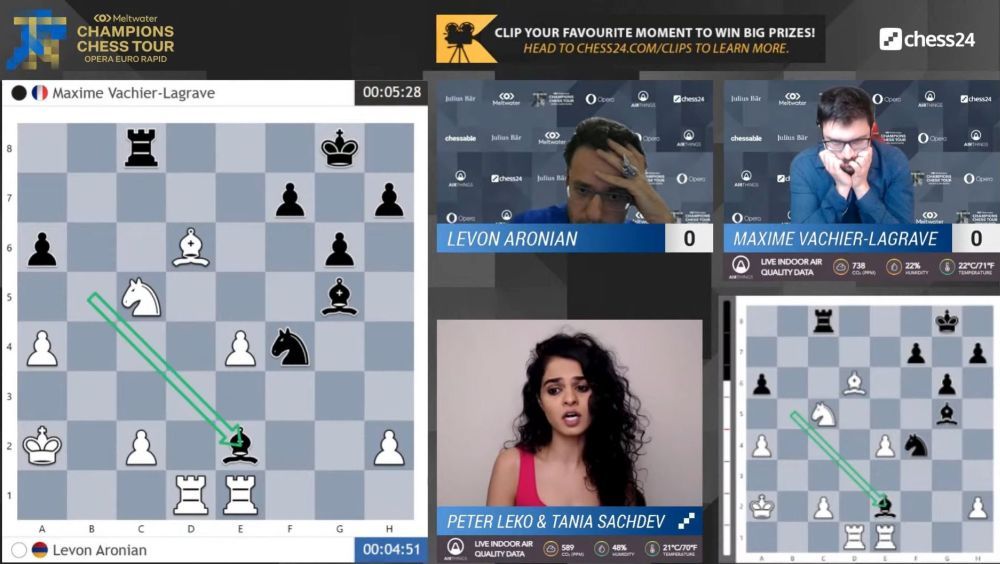 Where should white move the rook after 34...Be2 ? The game went on with 35.Rd4 which was certainly not the best square for the rook. White lost his advantage, soon afterwards tables turned and it was black who was pushing for a win.

The second game was a 26-move short draw. Aronian won the third game by his typical positional play capitalizing on Vachier-Lagrave's errors.

Vachier-Lagrave just needed a draw in the fourth game of the second set to advance to the Semi-Finals and that's exactly what he did against Aronian. Although the France no.1 was winning in the final position but it was unnecessary to push further since a draw was enough to advance.

Duda made a strange decision of giving up his exchange for no compensation. 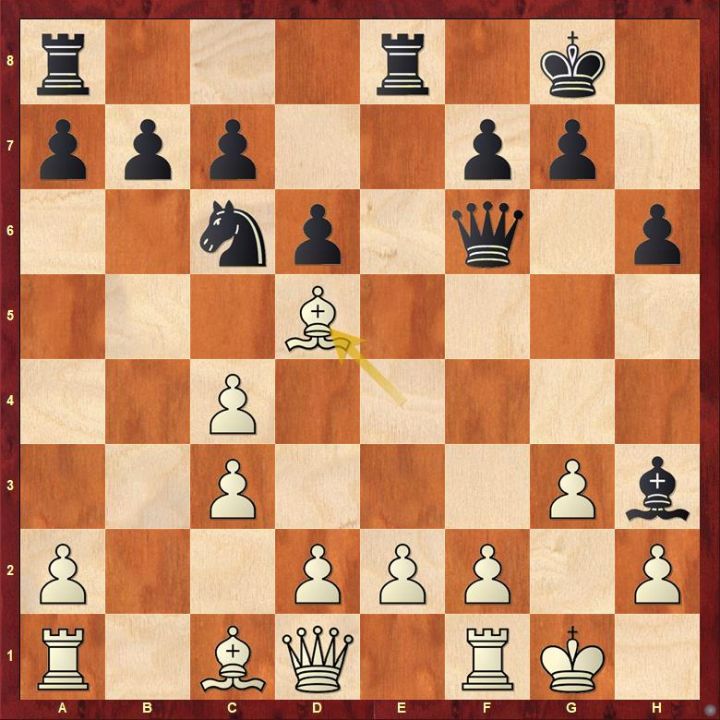 Duda went extremely passive in the second game. Naturally So capitalized on it by playing on both sides of the board and increasing his advantage. 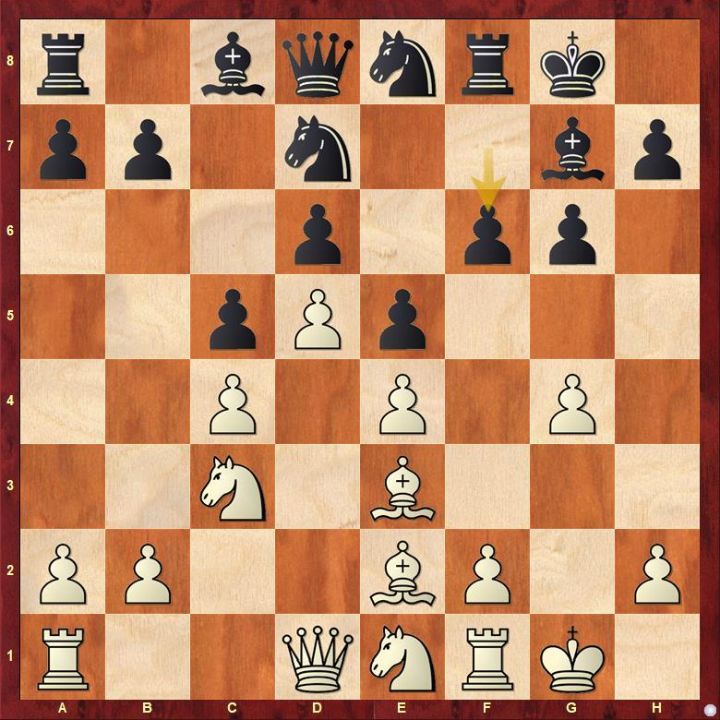 11...f6 does not help black in any way. If anything, it only makes matters worse. 11...f5 is a much better choice than 11...f6. White won the game by slowly improving his position, his pieces and capitalizing on black's further mistakes. With this second consecutive loss, Duda got eliminated as he had already lost the first set.

Not a lot happened in the first game and it ended up in a draw. 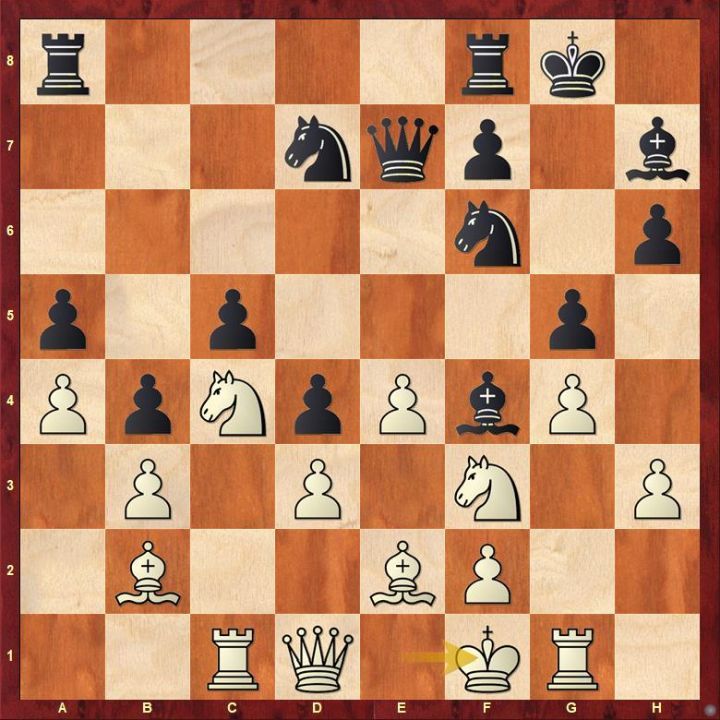 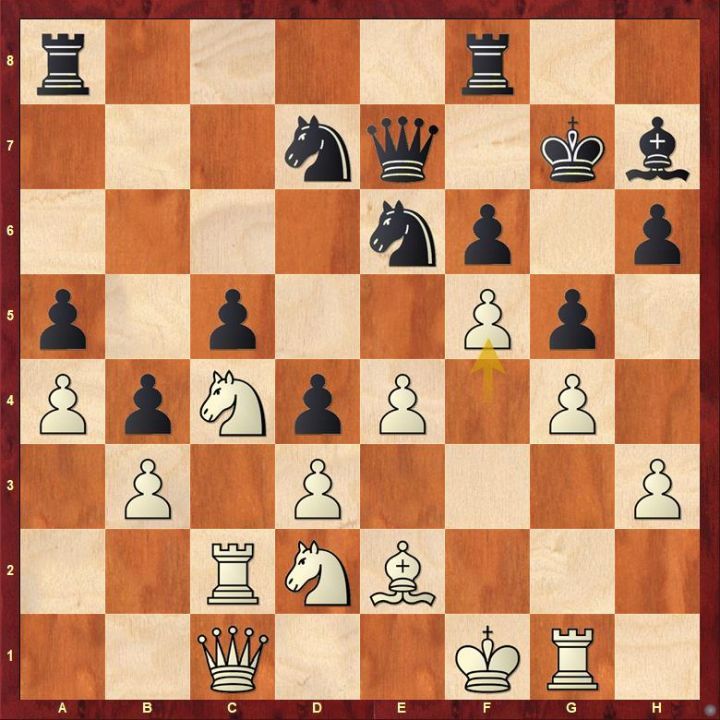 After 26.f5 it would have taken a Godzilla to break the gridlock because there is no way regular pieces were going to make a breakthrough.

The second and third game were uneventful draws. The fourth game was a well fought draw. Thus the necessity for tie-breaks had arisen. The first blitz tie-break game was also a draw. After making five consecutive draws, Radjabov won the second blitz tie-break and advanced to the Semi-Finals. 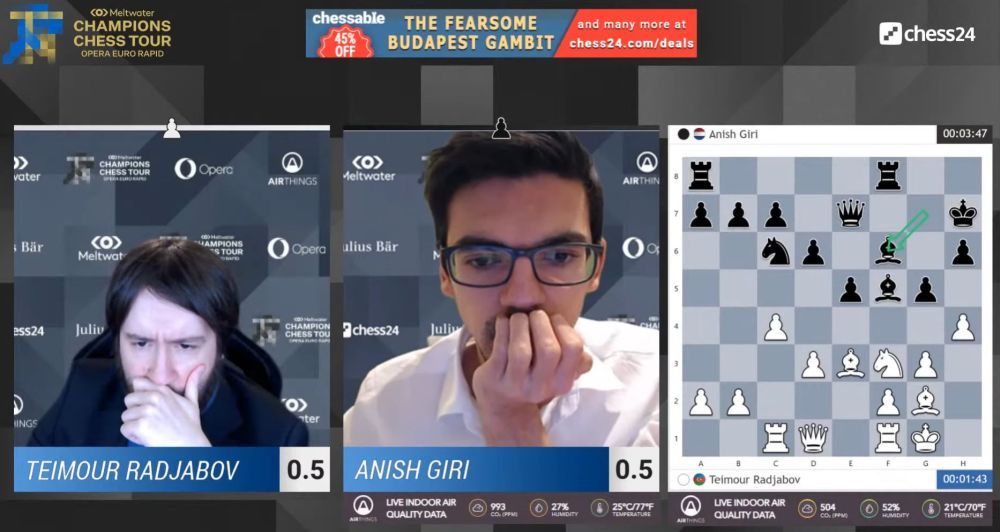 Find out why 15...Bf6 is a blunder and what black could have done instead. 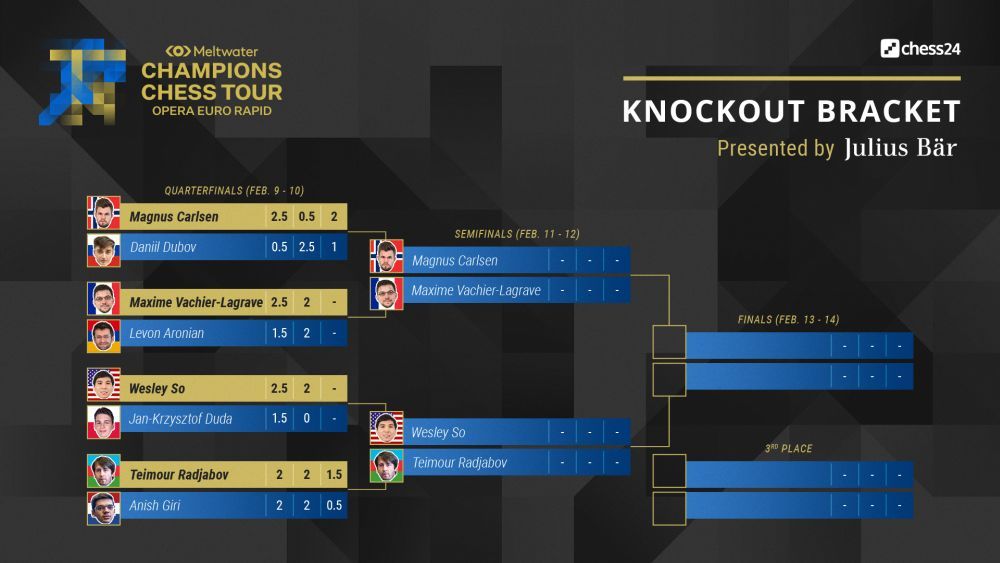 It will be Carlsen-Vachier-Lagrave and So-Radjabov in the Semi-Final | Photo: Champions Chess Tour