Giri or Nepomniachtchi - Who will win the Magnus Invitational?

Giri started with a determination to beat Nepomniachtchi in the very first game but it ended up in a draw in the Finals of Meltwater Champions Chess Tour Magnus Carlsen Invitational. The next three games also ended up in draws. Giri will obviously look for a way to avenge his prelims loss and get an edge heading into the Candidates next month. Carlsen was quite determined to avenge his loss against So and that's exactly what he did as he won the first set by 3-1. Finals continue tonight from 9:30 p.m. IST with live commentary by IM Sagar Shah and Amruta Mokal on ChessBase India youtube channel.

Giri showed some determination in the first game to avenge his prelims loss against Nepomniachtchi. However his advantage did not last long and Nepomniachtchi saved the position. The next three game also had the exact same result with less drama and excitement. On the other hand, Carlsen started with vengeance in his mind. He struck in the first game, drew the next two and again won the fourth game to win the first set 3-1 against So.

Will there be a decisive game in the Finals today?

Giri was better for the majority of the first game. 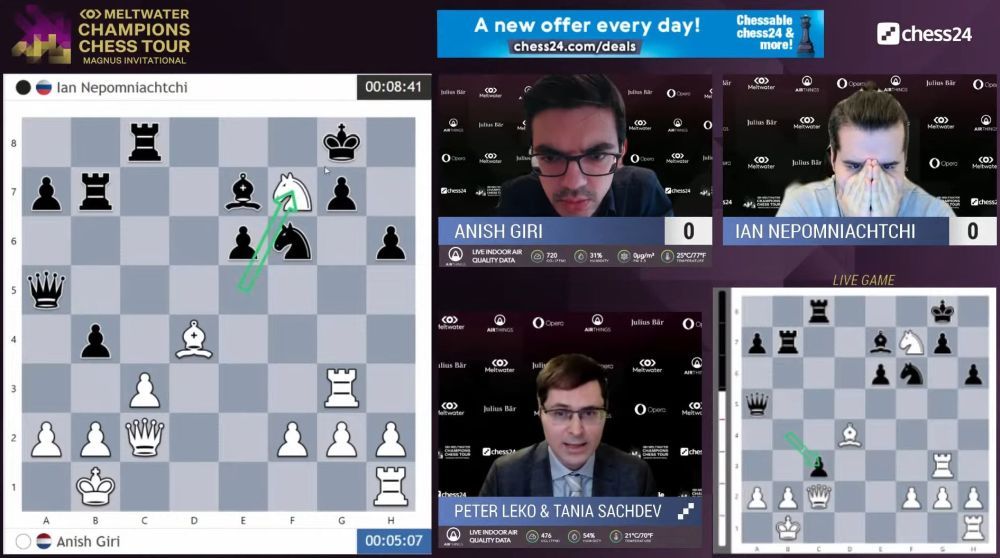 It is evident that Giri is willing to take the chances when the opportunity is presented. 20.Nxf7 bxc3 21.Nxh6+ Kf8 and the attack fizzled out after a couple of moves, eventually the game ended up in a draw.

The second game was a well fought draw where no one seemed to be in any real danger throughout the game.

Third game was a rather calm draw.

The fourth game was an uneventful draw.

Carlsen showed in the very first game that his only intent is to win and nothing else. 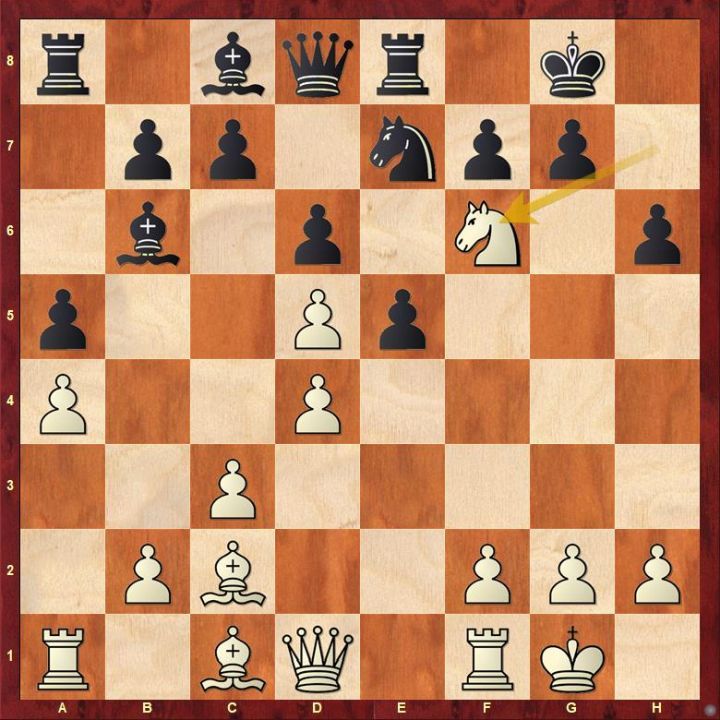 When was the last time you saw Carlsen play this aggressively early in the game? Well 14.Nf6+ is not decisive yet but he definitely hints about unleashing his wrath. 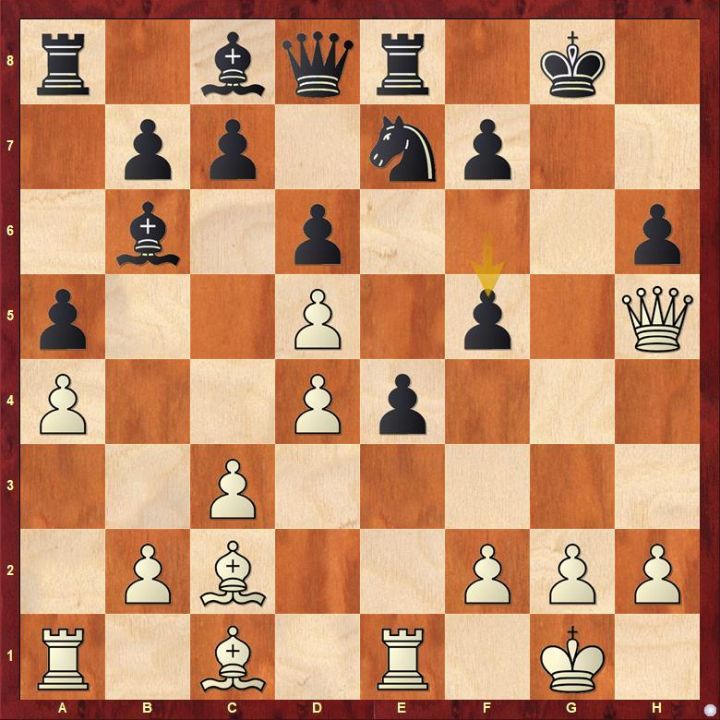 Black's big mistake in the game was 16...f5. Find out why and what he should have played instead.

The second game was a solid draw.

Third game also ended up in a draw, another bishop endgame, only this time it was a same color bishop.

In the fourth and final game of the first set, So went for an attack in an already unfavorable position. 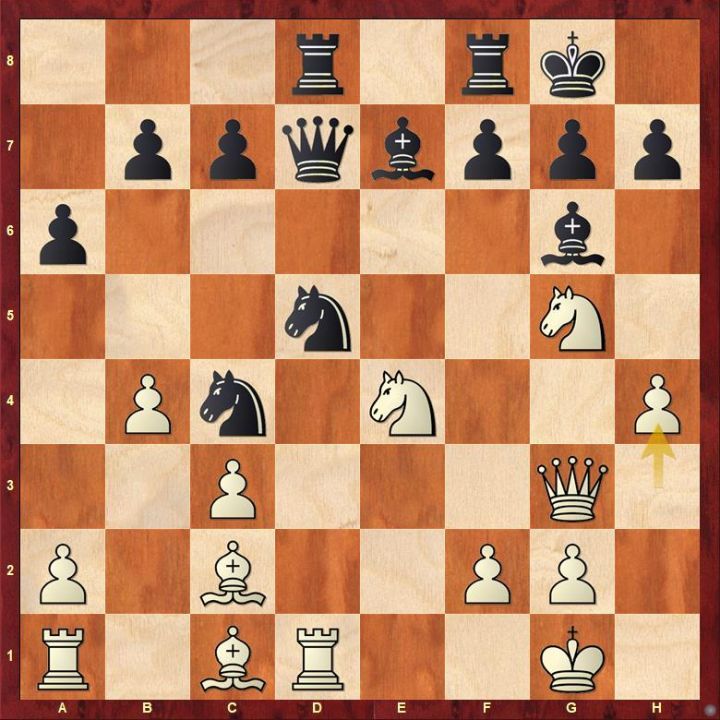 20.h4 does not help white's position as white is already lagging in development department. In fact it only helps black to capitalize on the existing pin. Find out how. 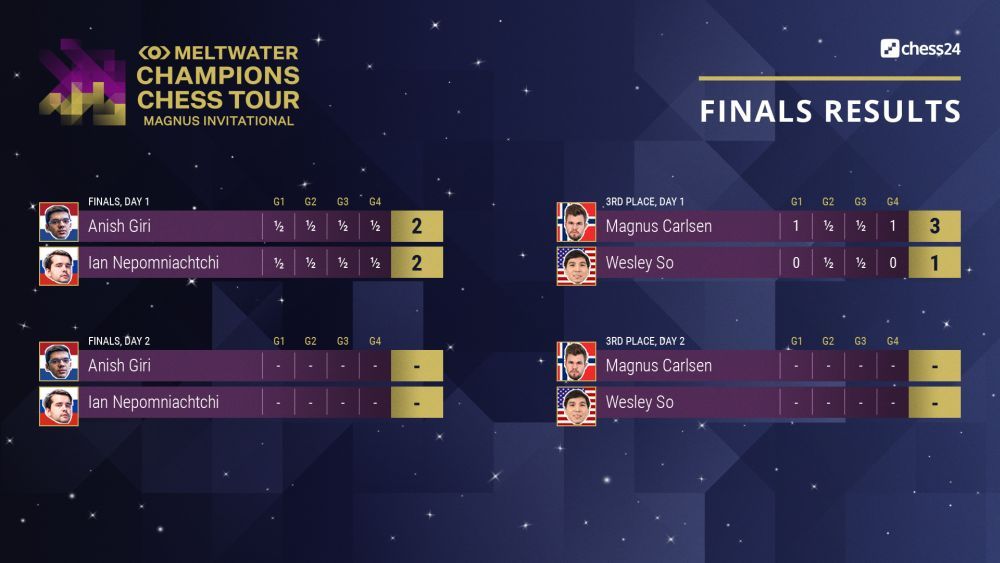 Giri-Nepomniachtchi is yet to see a decisive game | Photo: Champions Chess Tour 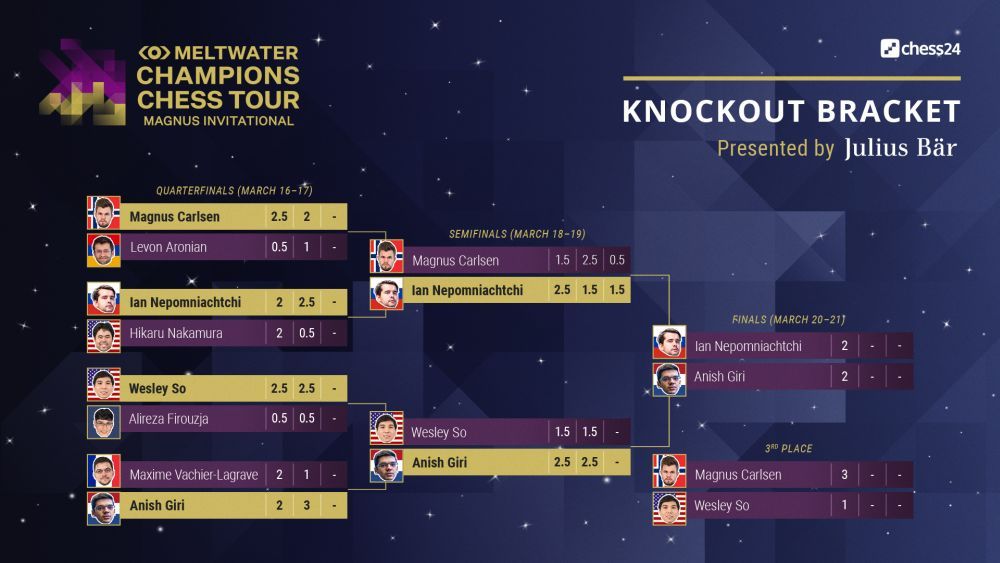 Carlsen has won the first set against So | Photo: Champions Chess Tour