2021 seems to be Giri's year as he beat Nepomniachtchi in the finals to win Meltwater Champions Chess Tour Magnus Carlsen Invitational. Giri dominated Tata Steel Chess 2021 and the same can be said for the Magnus Invitational. After all, he was the first person to beat Carlsen in two consecutive editions of Magnus Invitational. Yes Nepomniachtchi beat Carlsen in the Semi-Finals but it was Giri who had the last laugh. With Candidates less than a month away, there is a good chance that Giri would continue his momentum there. Carlsen beat So again in the second set to secure third place. Photo: Champions Chess Tour

Anish Giri finally wins his first tournament of the year as he beat Nepomniachtchi convincingly in the Finals to win Magnus Invitational. After making a draw in the first game, Giri won the second game. The third game ended up in a draw but Nepomniachtchi equalized by winning the must-win fourth game. However, Giri was completely in his element as he won both blitz games and Nepomniachtchi stood no chance. 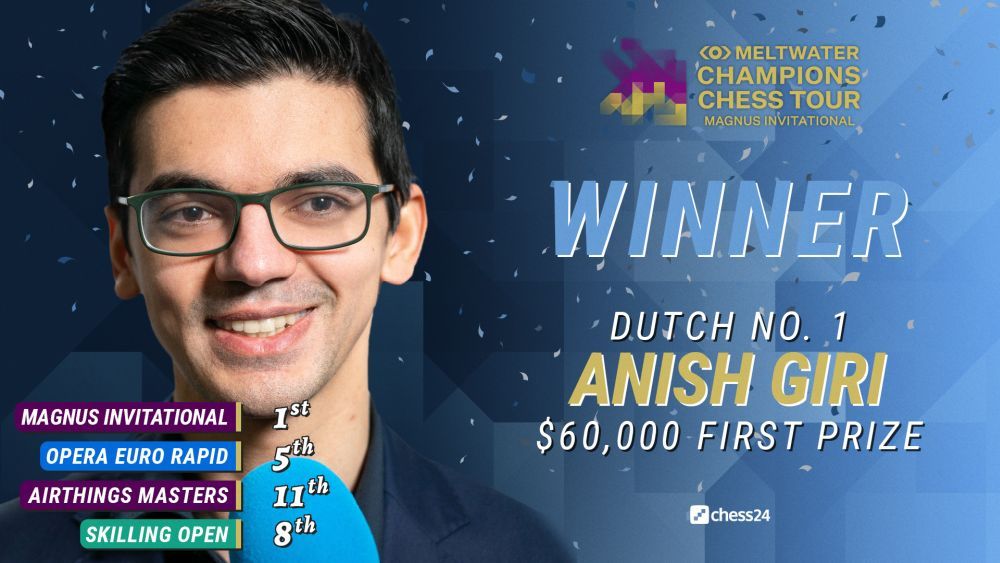 Giri on winning the tournament, "Obviously it's good, it's great to win but I wouldn't call this a career defining moment or anything. Contrary to this fake news that's been spread by my competitor, I have won various tournaments on various occasions including the prestigious Mr. Dodgy invitational and few others. I am not going to name my own accomplishments, I hope somebody else will do it... It's mostly good for the vibes, for the Candidates preparation... I am of a firm belief that there is no such thing as destined... It's good before the Candidates that I win a tournament like this one..."

Both players showed a lot of promise to attack the other in the first game but eventually Nepomniachtchi had to settle for a perpetual check to save himself from an impending checkmate threat.

Giri scored the first win of the Finals in the second game. 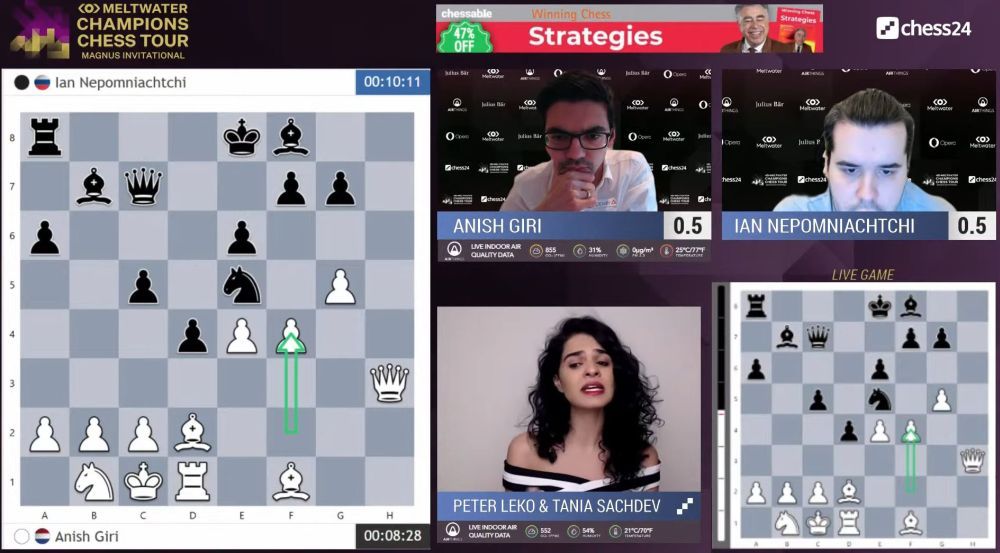 Nepomniachtchi made an incorrect decision of moving his knight to 18...Nc6 which allowed white to crash through with 19.g6. Black should have played 18...Ng6 to prevent it.

After splitting the point in the third game, Nepomniachtchi struck back and won the fourth game forcing blitz tie-breaks. 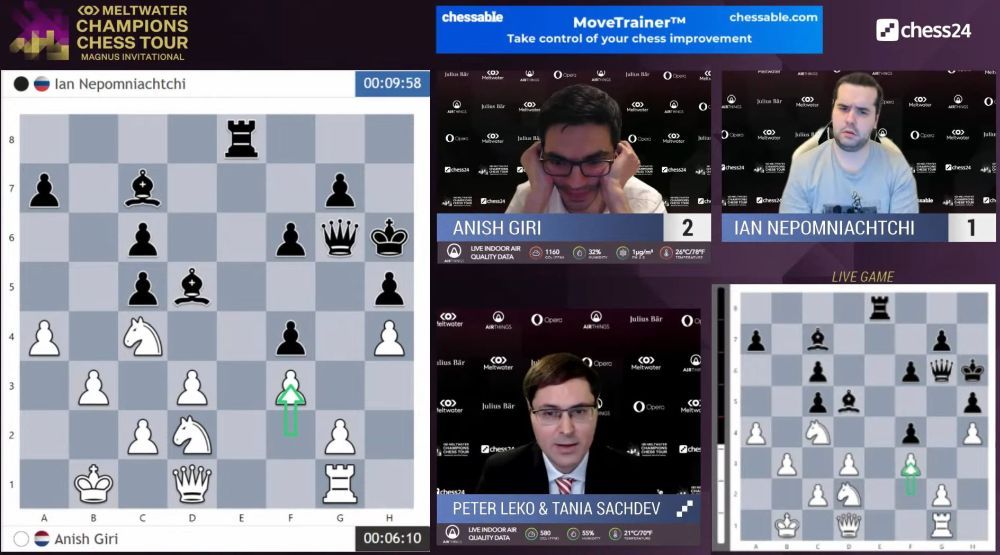 Giri went quite passive with 29.f3 which only made things worse for white. Nepomniachtchi comfortably wrapped up the game in the next ten moves, tied the set 2-2 and forced tie-breaks.

Giri won the first blitz game with a brilliant display of attack. 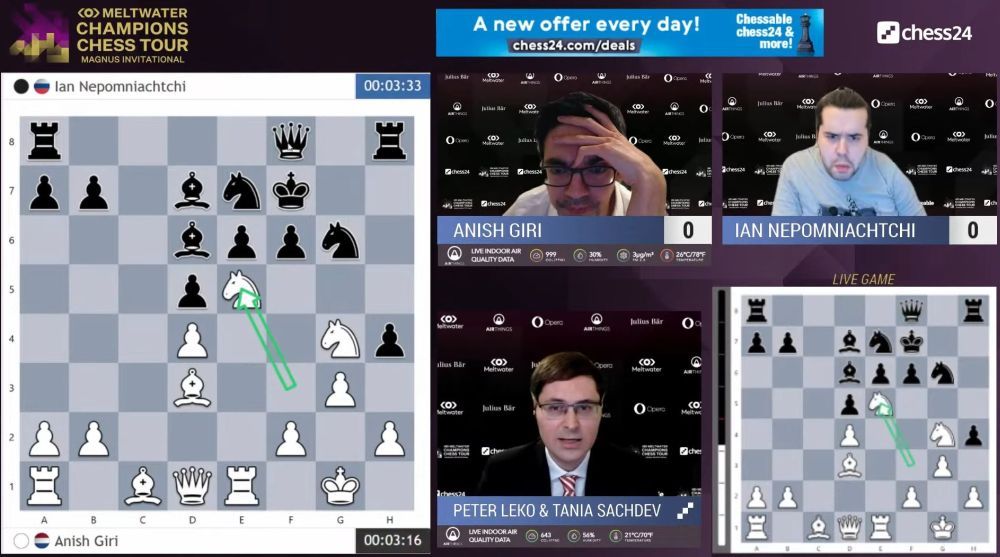 17.Nfe5+ surprised Nepomniachtchi. Computer may not like that move but it is exactly what white needed. It is incredibly difficult to defend volatile positions like this especially in blitz. 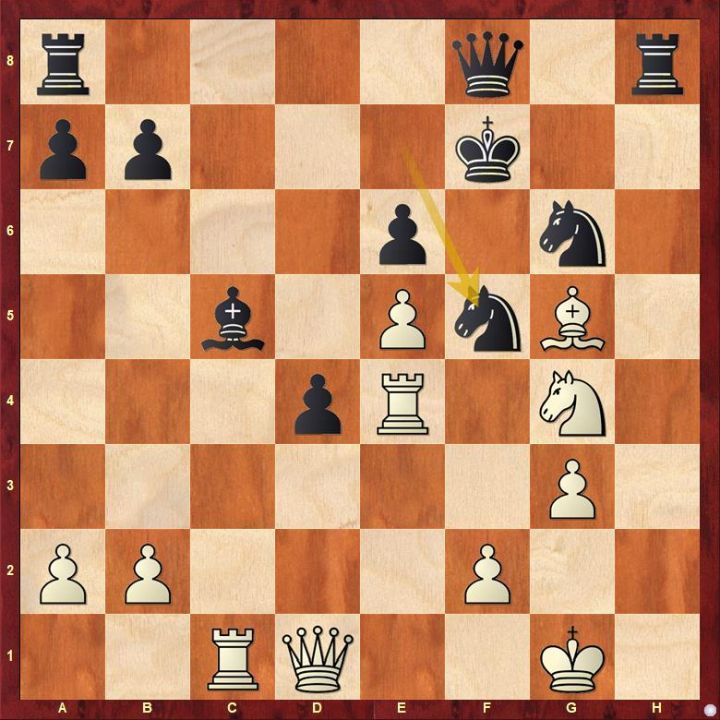 It almost seems like black has managed to save the day. Well that is far cry from the truth. Find out how should white continue the attack after 23...Nf5. Giri won the game in another nine moves.

After nine consecutive games of Sicilian between Giri and Nepomniachtchi, the Russian finally changed the pattern with 1.b3. 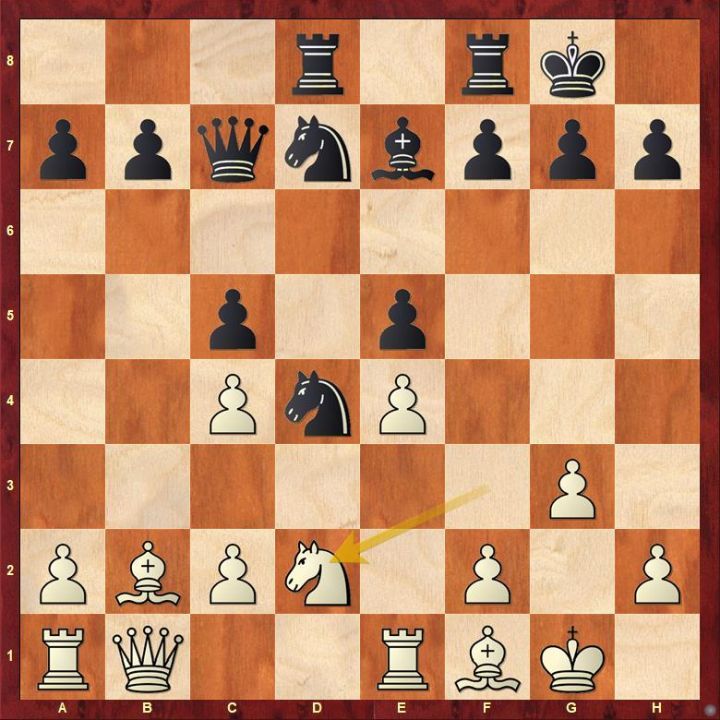 Nepomniachtchi played the second blitz game uncharacteristically passive as evident from 16.Nd2. Giri won the game comfortably with a fine display of technique. Thus he won the tournament too. 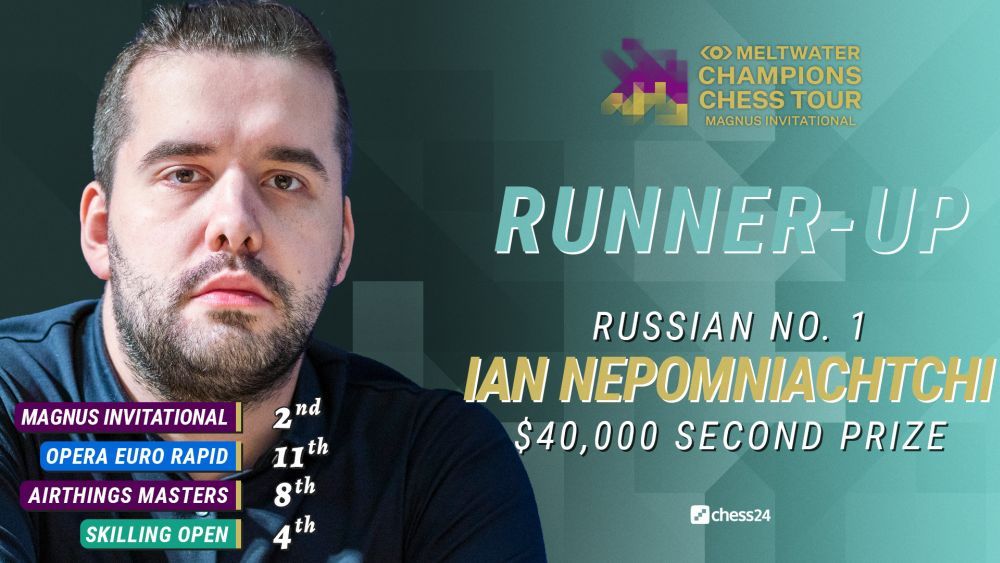 Even So got a solid position out of the opening, victory is the only thing that was on Carlsen's mind. 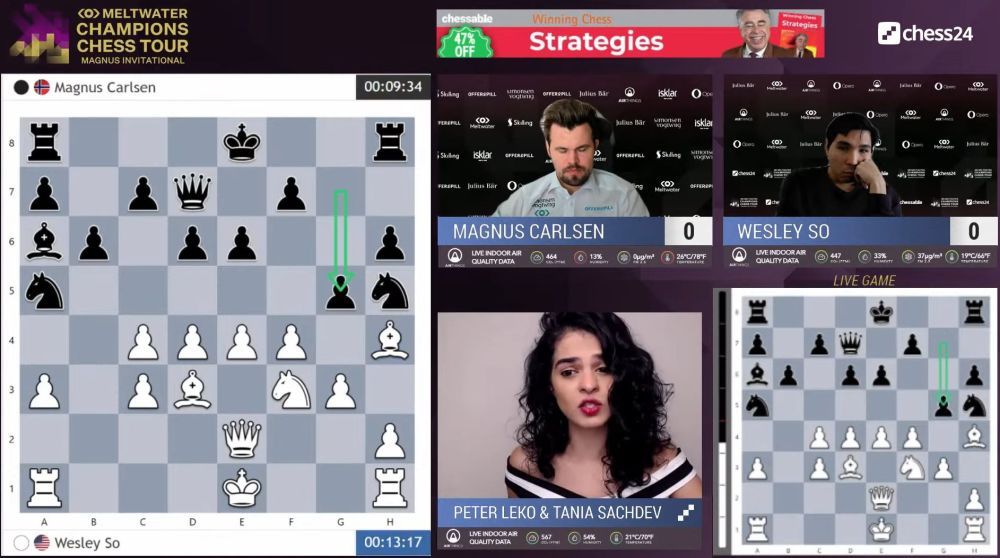 Carlsen made two comfortable draws in the next two games to win the second set and secure third position. 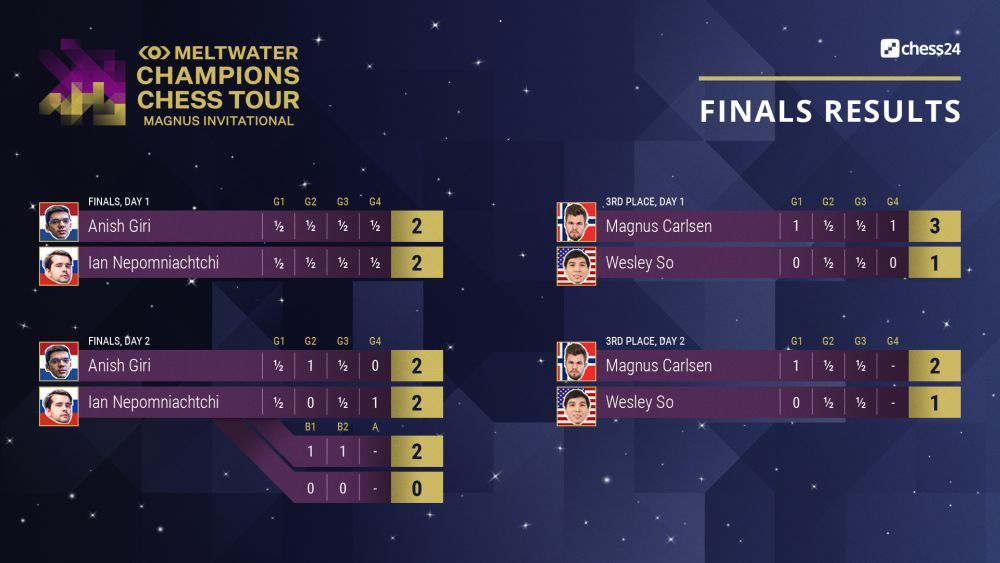 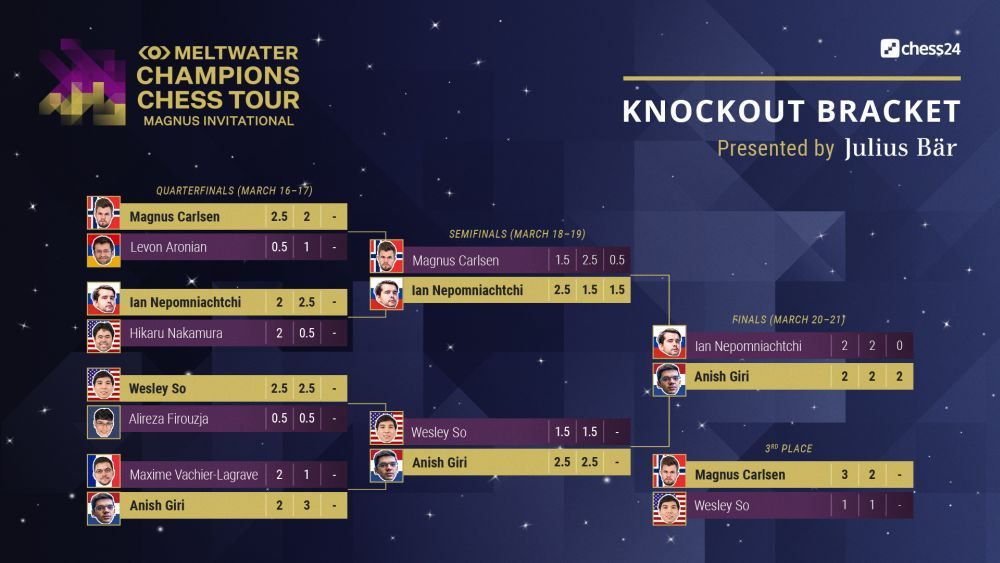