Both Adhiban and Arjun Erigaisi continues their impressive run as they are still undefeated in the Indian Qualifier for the Meltwater Champions Chess Tour. While Adhiban was completely dominant against Praggnanandhaa, Arjun was against Harsha. The other two Semi-Finalists Aravindh and Gukesh also scored emphatic victories when required to secure their place in the Semi-Finals. Adhiban will go against Aravindh and Gukesh will face Arjun Erigaisi in the Semi-Finals. One thing that is now guaranteed is, we will get two finalists from two facets of Indian chess - One of India's top established and a talented youth player will qualify in the Meltwater Champions Chess Tour. Photo: Tata Steel Chess

Adhiban, Aravindh, Arjun Erigaisi and Gukesh are the final four

Adhiban unleashed his 'Beast mode' on Praggnanandhaa and won the match 3-1 to advance to the next stage. Aravindh Chithambaram was stretched to the blitz tie-breaks by Surya Sekhar Ganguly where he won both games to win the match 4-2 and setup a clash with Adhiban in the Semi-Finals. Mitrabha once again managed to put up a good fight against Gukesh but he lost the fourth game 2.5-1.5 which allowed Gukesh to move to the Semi-Finals where he will face Arjun Erigaisi who beat Harsha Bharathakoti in 7 moves in the third game and drew the remaining three to win the match 3-1. 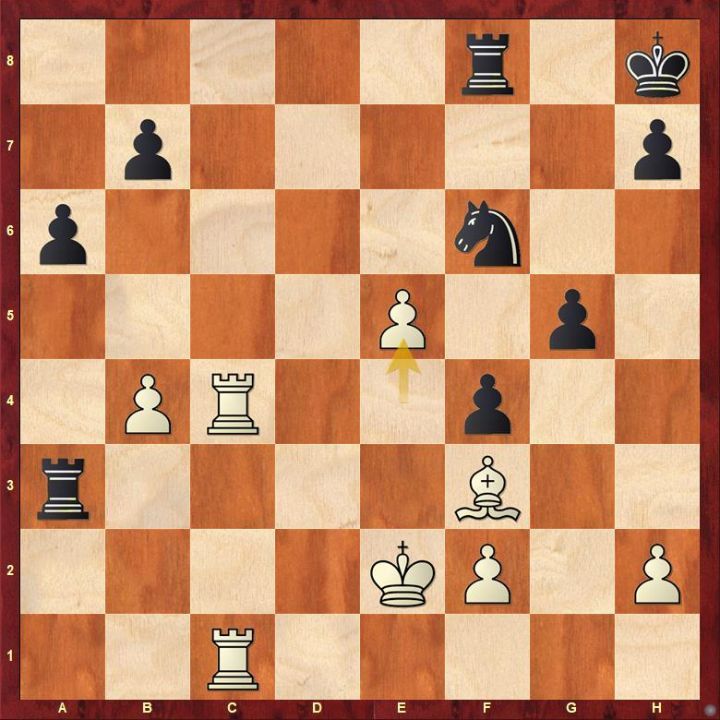 Black's knight and b7-pawn both are hanging. It is not possible to save both but what should black do here to make sure that the damage is minimum? The game went on with 28...g4 29.Bxb7 f3+ 30.Kf1 and then Nd7 made things much more difficult for black. Adhiban pushed the e-pawn and that became the decisive pawn for him to score a full point.

Adhiban once again employed the Grunfeld in the fourth game and they repeated the first ten moves same as the second game. Then Pragg deviated with 11.Be2 instead of Qa3 in the previous game. 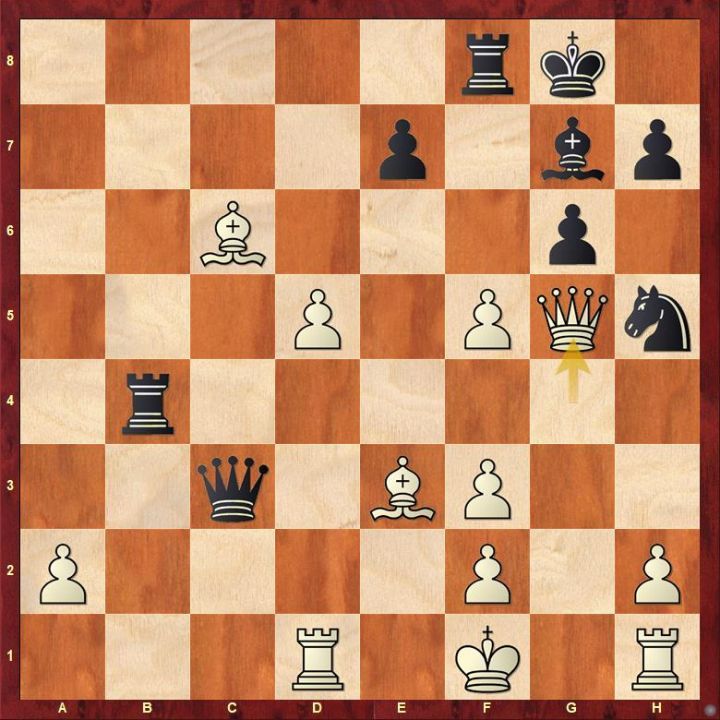 Praggnanandhaa made a big positional mistake with 22.Qg5. Find out the winning plan for black in the above diagram. Adhiban finished the game in another five moves. With this win, Adhiban won the match 3-1 and advanced to the Semi-Finals.

Ganguly made a tactical error in the first game which gave an immediate advantage to Aravindh. However he chose not to take it. 15...Qb4 is a tactical oversight as white can gain material. Find out how. Soon afterwards Aravindh decided to take two rooks for his queen and eventually win the game. He took 1-0 lead after the first game.

Second and third game ended up in draws. However Aravindh had a very good chance in the third game. 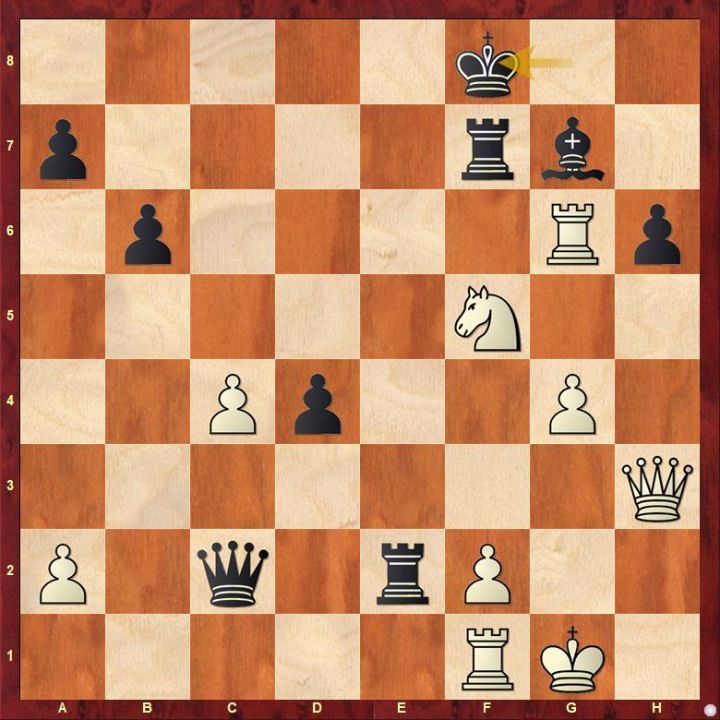 Black king is in peril. How can white make the most out of this position? The game ended up in a draw which means Aravindh had a 2-1 lead and Ganguly was in a must-win situation in the fourth game. 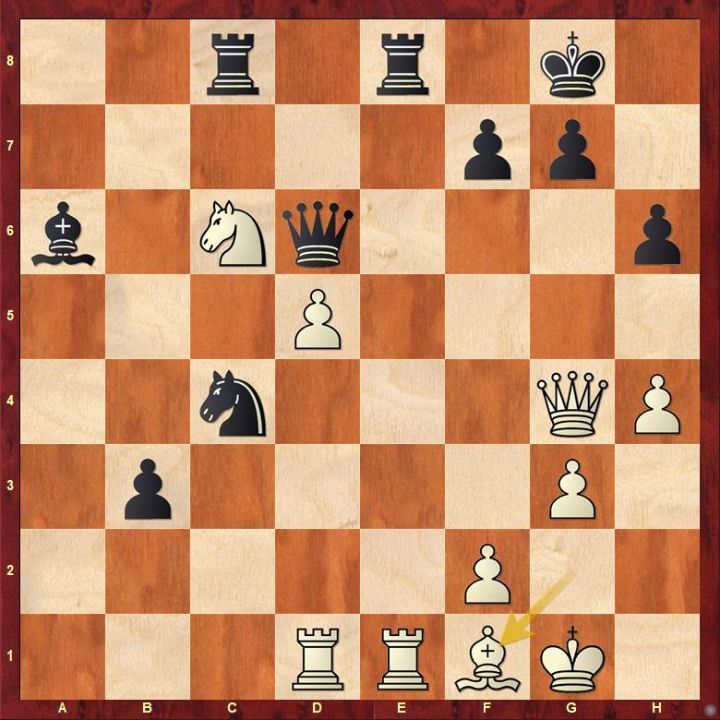 White has a lot of threats after 34.Bf1. What should black do here to thwart them all? Soon afterwards white got a winning position but a bit of inaccurate play allowed black to get back in the game. 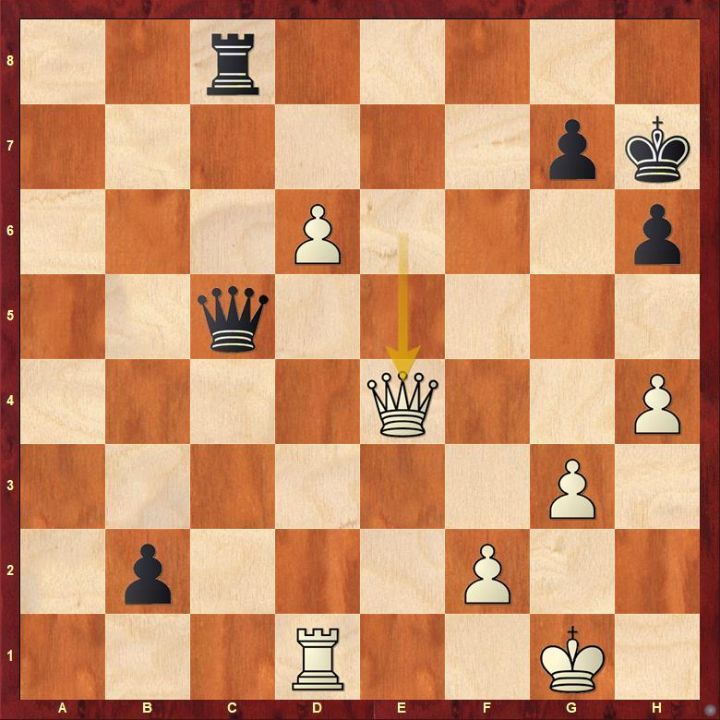 Black can still save the game by retreating the king back to g8. The only move black should not play here is 41...g6 which was played in the game and white won it. Thus Ganguly forced blitz tie-breaks by leveling the match 2-2.

In a seemingly equal endgame, Ganguly made an incorrect exchange of knights which allowed Aravindh to win the first blitz game and take 3-2 lead. 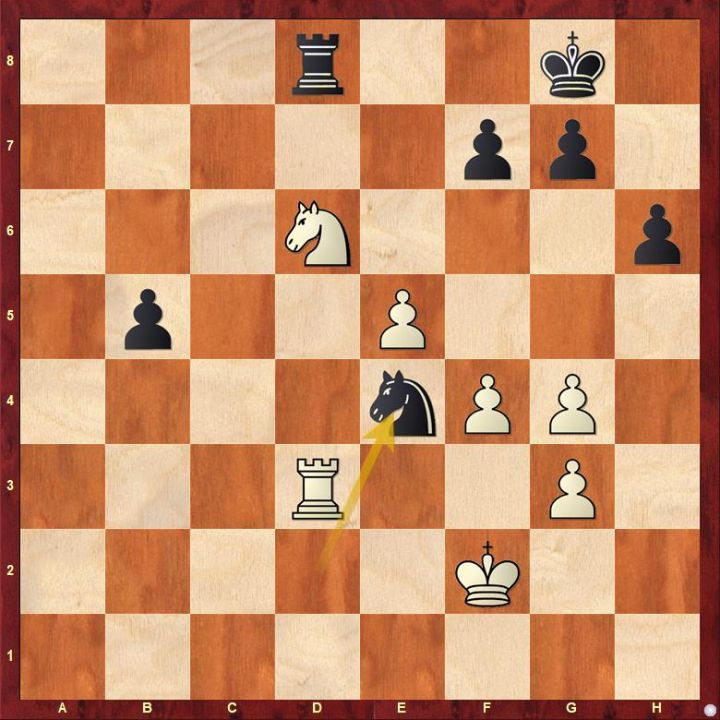 36...Nc4 was the need of the hour, instead 36...Ne4+ loses valuable time for black as white gets to advance his king with a tempo. Black sealed his fate with 37...Nxd6 after 37.Ke3 as the resultant rook and few pawn ending is completely winning for white.

In the second blitz game, Ganguly made an error which allowed Aravindh to invade his opponent's territory without much resistance. 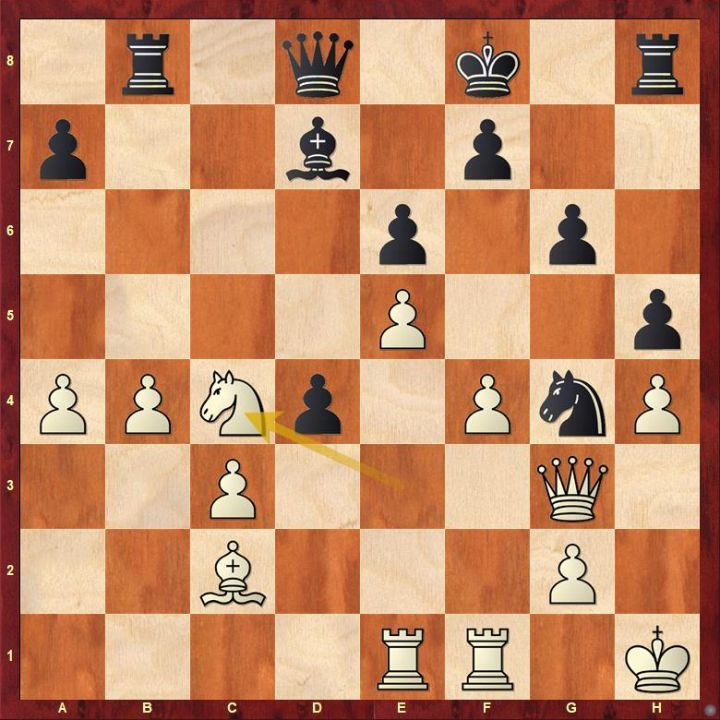 28.Nxc4 helps black to invade on the c-file with 28...Rc8. Rest was just a matter of technique and Aravindh won it without any difficulty. Win this victory, Aravindh won the game and the match by 4-2 to advance to the next stage. He will face Adhiban in the Semi-Finals.

Mitrabha needed to seize every opportunity he got in the endgame. At first he hesitated, later on he went for the counterplay. 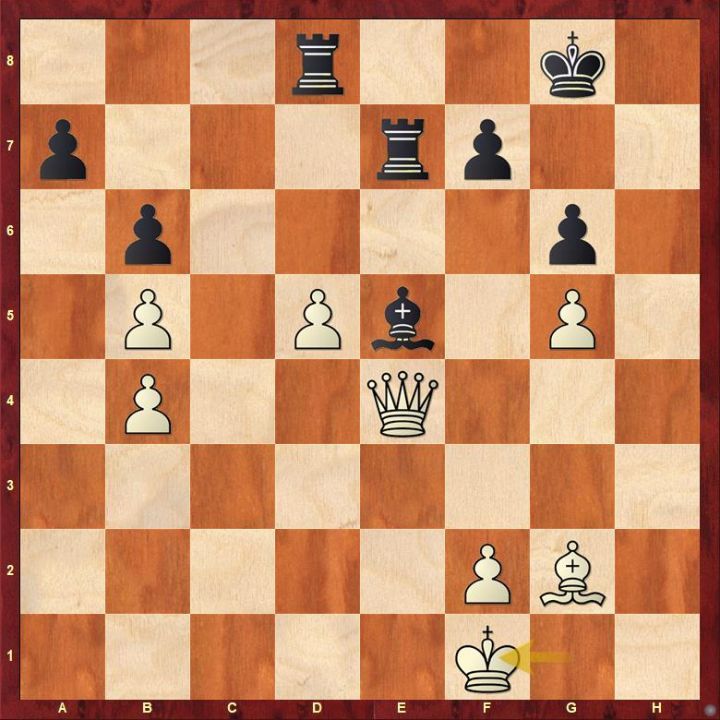 It is time for black to launch an attack of his own after 53.Kf1. How? The game continued with 53...Rde8 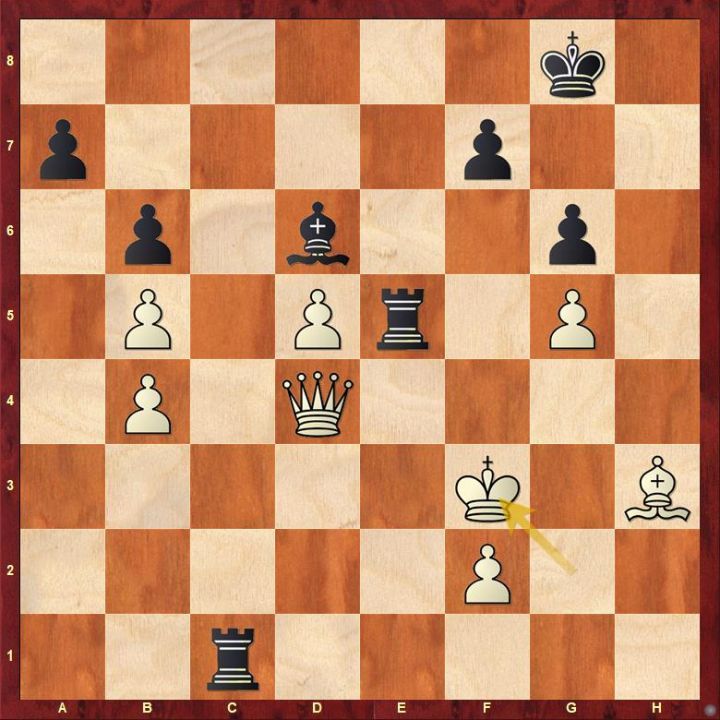 Black has to make a decision - b4 or g5, which pawn should he go for. In the game, Mitrabha went for the g5 pawn, turns out it was not the right one. Gukesh eventually won the game and took 1-0 lead.

Mitrabha immediately struck back in the next game after Gukesh misjudged Mitrabha's intentions in the endgame. 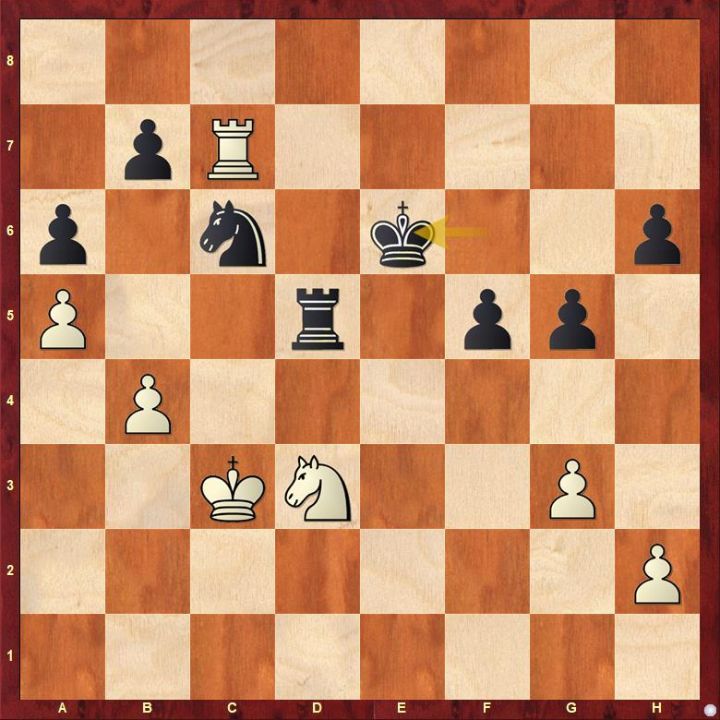 Instead of taking the e6-pawn, black needed to play 45...Rb5 and defend the b7-pawn as white's queenside pawns became the deciding factor of the game. Mitrabha converted his advantage with ease and levelled the score 1-1.

Third game was a short 18-move draw. Mitrabha erred in the middlegame of the fourth game which cost him two minor pieces for a rook. 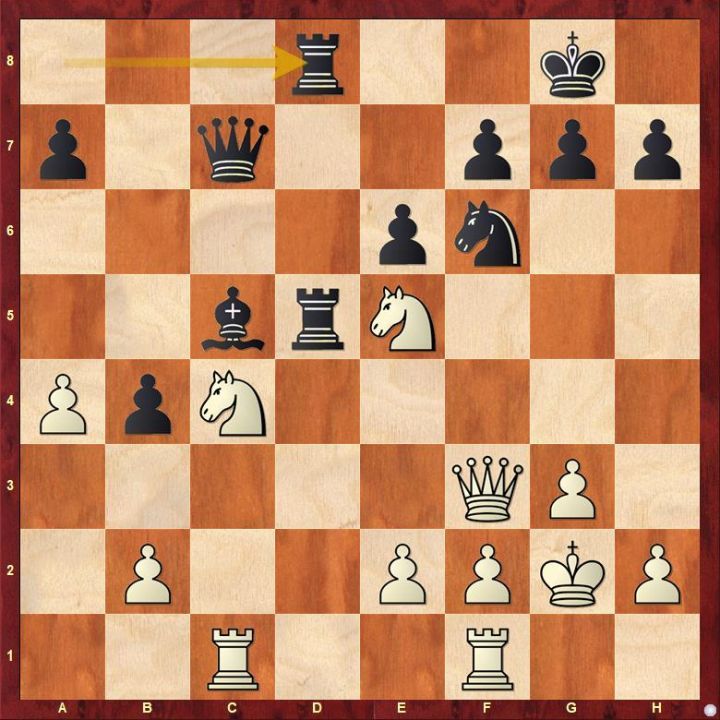 White played 20.Nd3 here which is actually a mistake and when you are playing against, even a tiny bit of mistake can cost you the entire game which is what happened. Instead white needed to play 20.Ng4 to make sure the queen has enough breathing room. Gukesh eventually converted his material advantage into a win to win the match 2.5-1.5 and advance to the Semi-Finals.

After two lukewarm draws, Harsha blundered a piece early in the opening and resigned after seven moves in the third game. Thus Arjun took a 2-1 lead heading into the fourth game.

Fourth game was a well contested draw, even though the final position was in Arjun's favor, he made a draw because it was enough for him to win the match 2.5-1.5 and advance to the next stage. Arjun Erigaisi will face Gukesh in the Semi-Finals. 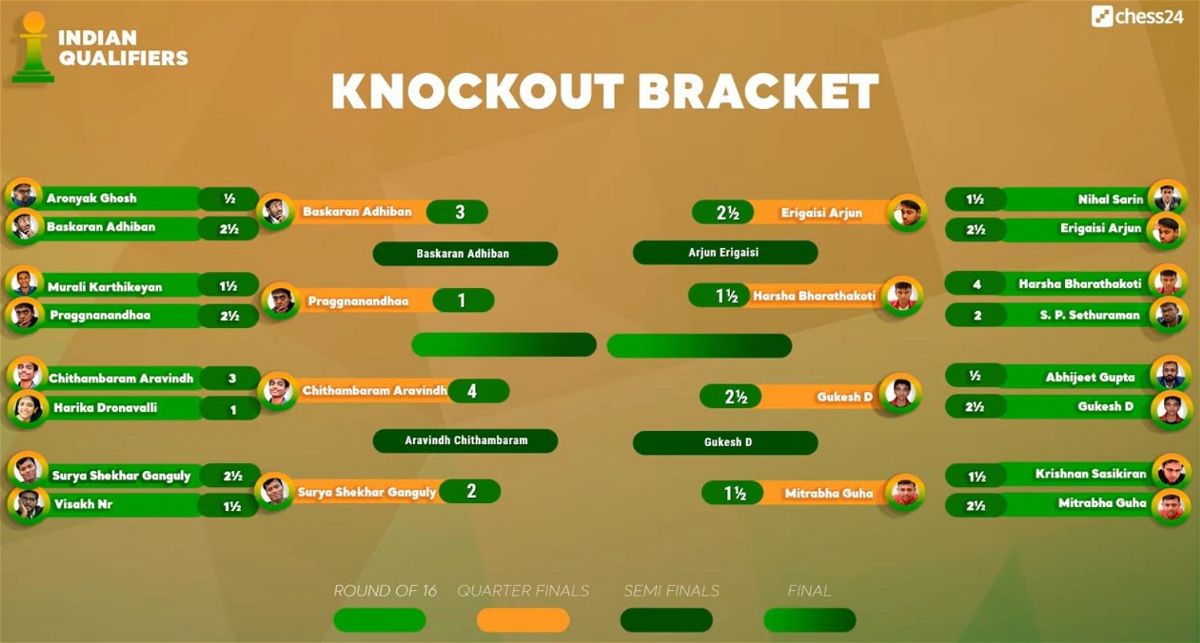