Arjun Erigaisi eliminated former World Blitz champion Liem Quang Le to advance to the Finals of Meltwater Champions Chess Tour Julius Baer Generation Cup. For the second consecutive match, Arjun won the Blitz tie-breaks. Although, he could have finished the match in the third game only which he was completely winning. He missed it and drew the game, lost the next one which enforced tie-breaks to be played. Magnus Carlsen on the other hand, won third and fourth game after drawing the first two games against Germany no.1 Vincent Keymer. Arjun will now face Carlsen in the Finals which starts tonight at 9:30 p.m. IST. Photo: Champions Chess Tour

"I only played a couple of games against him. The first was a draw in the World Blitz 2021, and the second was the first game of the Preliminaries here, but he is amazingly strong, very good practically as well, so he is a very tough opponent. As I said on an earlier day, I think he’s certainly a top 10 player in the world when it comes to Rapid and Blitz." - Magnus Carlsen on Arjun Erigaisi before they face each other in the Finals tonight. He also added, "It’s clear that he’s improving, he’s doing very well. He’s probably also going to have challenges at some point, but that they come potentially when playing against the best in the world and not before, is very, very positive, and I’m very curious to see how he will do also in other events against top, top players."

Arjun Erigaisi sets up a clash with Magnus Carlsen in the Finals | Photo: Champions Chess Tour

The first two games between Magnus Carlsen and Vincent Keymer ended in draws. The world champion grinded a relatively equal bishop vs knight endgame in their third encounter. In less time it is difficult to determine where to move the knight. 81...Kd5 does not work either due to 82.Bd5 and the white king will gain entry from the side which Black decides to give up. Thus, 81...Nf5 was the only way to save the day for Black as he aims to go for each pawn by both knight and king on both sides of the board which makes it difficult for White save them. 81...Nc6 was played 82.Ke4 and White went on to win the game.

Carlsen got a completely winning position in 20 moves in the fourth game. 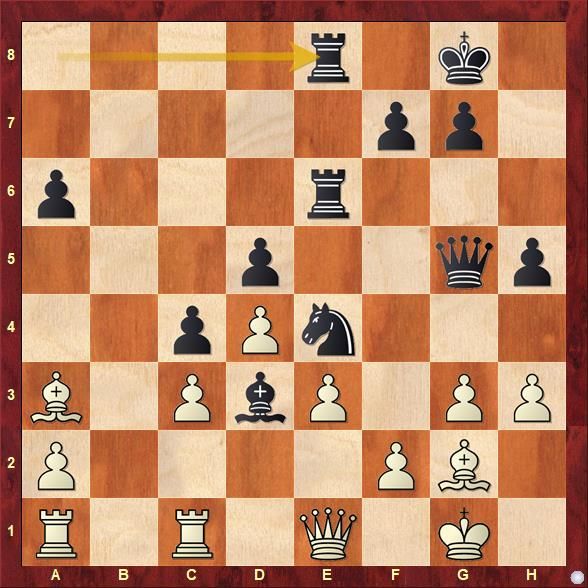 Black has a firm grip in the above position. White not only lacks space but also piece coordination is not good either. Vincent Keymer could not win the must-win game and he had to succumb to his opponent's attack. Thus, Carlsen won the Semifinal 3-1 to advance to the Finals.

Interview with Magnus Carlsen after his Semifinal win against Vincent Keymer | Video: chess24 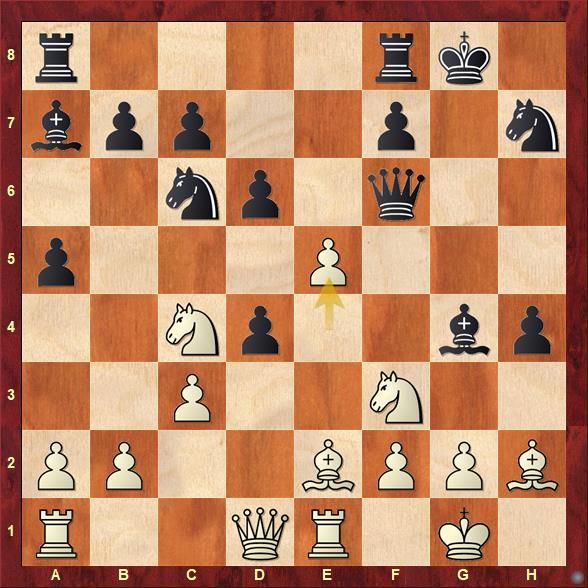 Since Black launched an attack on the kingside, Arjun took a principled approach of launching a counter-attack at the center of the board 18.e5 dxe5 19.Ncxe5 Bxf3 20.Bxf3 dxc3 21.Nd7 and Black's position fell apart in a hurry. 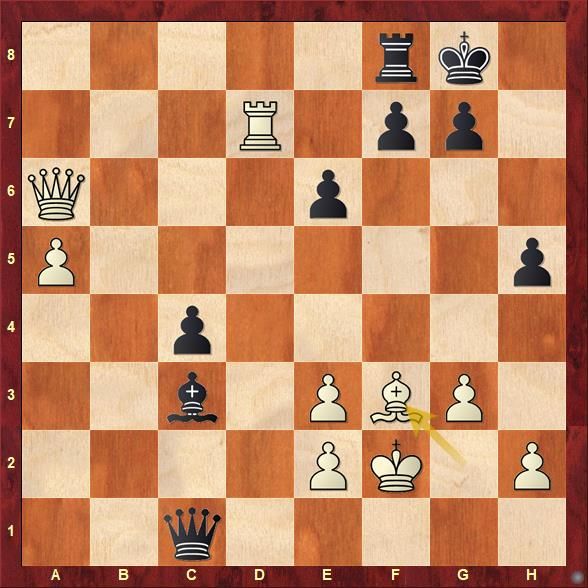 Arjun got a second chance to play Bc3 and he took it. however, 35.Bf3 he did not follow through correctly. 35...Be1+ 36.Kg2 c3 37.Rc7 c2 38.Qd3 and the c2-pawn dropped. The game eventually ended in a draw. Can you find out what Black could have done instead? This win would have ended the Semifinal immediately for Arjun as he would have won the match 0.5-2.5.

It was tough to a draw a winning game for Arjun Erigaisi | Video: ChessBase India

Arjun lost the fourth game which means the score tied at 2-2. Thus, he had to play the Blitz tie-breaks. He won both tie-break games convincingly to secure his place in the Finals and set a clash with the world champion, Magnus Carlsen.

Arjun beats Liem in the second Blitz tie-breaks to advance to the Finals| Video: ChessBase India
Interview with Arjun Erigaisi after he eliminated Liem | Video: chess24 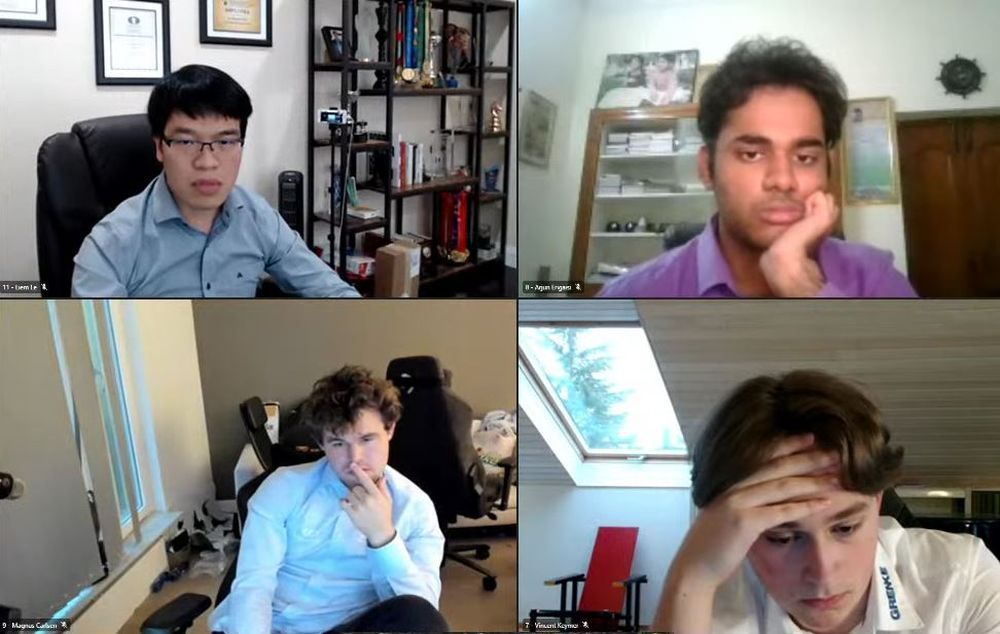 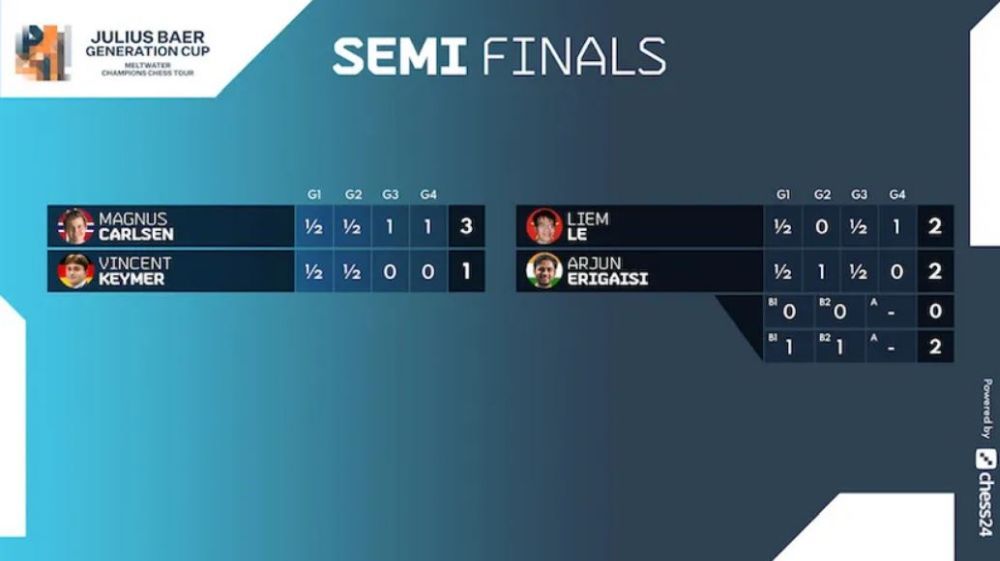 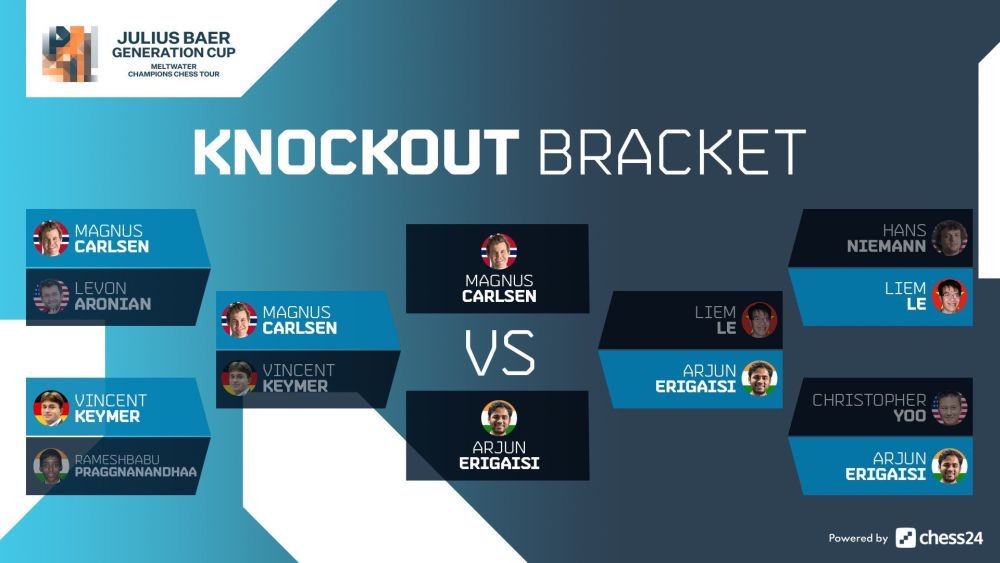 Carlsen vs Arjun Erigaisi will be the Finals | Photo: chess24