Arjun Erigaisi defeated the world champion Magnus Carlsen in the seventh round of Meltwater Champions Chess Tour Aimchess Rapid 2022. This is Arjun's first-ever victory over the world no.1. The teenager showed that he learnt from his mistakes in the previous event and he worked out a way. When Carlsen opted for the Modern Defence once again, Arjun did not go for the same line which he did twice at the Julius Baer Generation Cup. Nodirbek Abdusattorov maintains his sole lead 17/24, followed by Shakhriyar Mamedyarov and Magnus Carlsen at 16/24 each. Jan-Krzysztof Duda and Arjun are at 15/24, Vincent Keymer, Anish Giri and D Gukesh at 12/24 each. Round 9 starts tonight at 9:30 p.m. IST.

Vidit Gujrathi started the second day with a win over the reigning World Rapid champion, Nodirbek Abdusattorov. However, that did not deter the Uzbekistan no.1 from maintaining his pole position. He bounced back with two victories and a draw to once again finish the day at the top. Vidit Gujrathi is currently at 10/24, followed by IM Aditya Mittal 9/24. 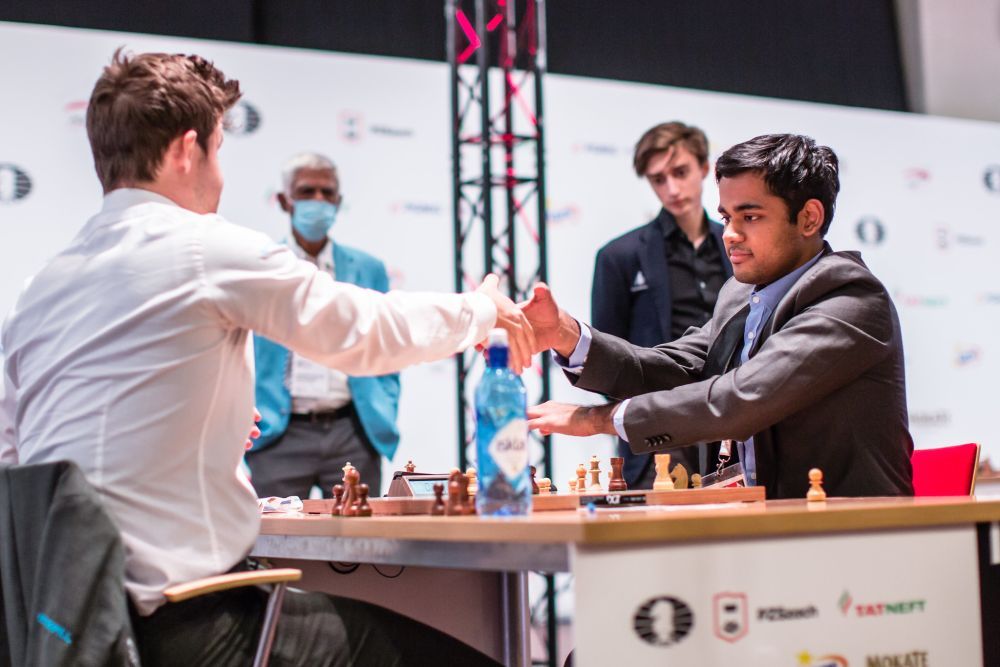 Arjun Erigaisi started the second day with a win over Sweden no.1 Nils Grandelius. Black had a good position until he played 38...Rce8 which allowed 39.Nc4+ tactic and droppped the a5-pawn. 39...Kc7 40.b6+ Kd7 41.Nxa5 Rxe3 Black recovered it immediately. The tactic was not about gaining a pawn, it was about getting a breakthrough and making an improvement of the position. Arjun maneuvered his knights beautifully to gain decisive advantage and eventually liquidate into a completely winning knight endgame. Black should have played 26...Nf6 and not initiate a queen exchange at d5. 27.Qxc4 Rc8 would have been fine. Instead, 26...Qxd5 27.exd5 Rd8 28.d6 c3 completely turned things in White's favor. Vidit is very strong in converting these advantages in the endgame and he won it comfortably.

Abdusattorov and Gukesh had a cracker of a game. It was the first time they faced each other in a tournament since 44th Chess Olympiad. 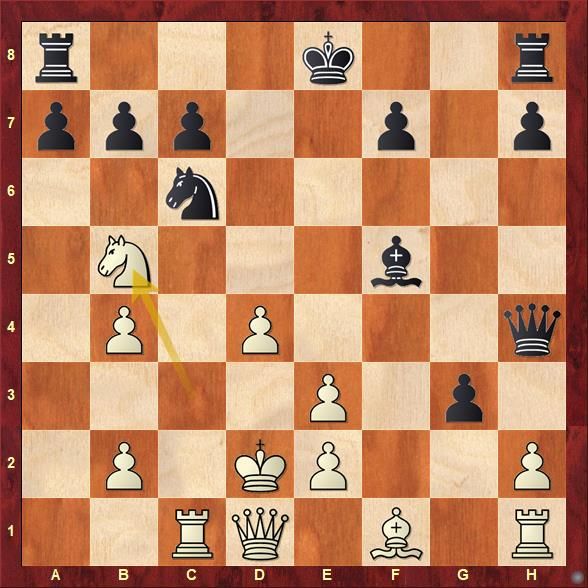 The position already looks quite volatile. 15...Be4 16.Nxc7+ Ke7 is what the computer recommends for Black to gain a decisive advantage. However, it is not easy to comprehend this position correctly for human minds. Abdusattorov eventually won the game which was an absolute thriller.

Arjun Erigaisi defeated Daniel Naroditsky (USA). Despite being worse out of the opening and early middlegame, Arjun managed to turn things around in his favor. 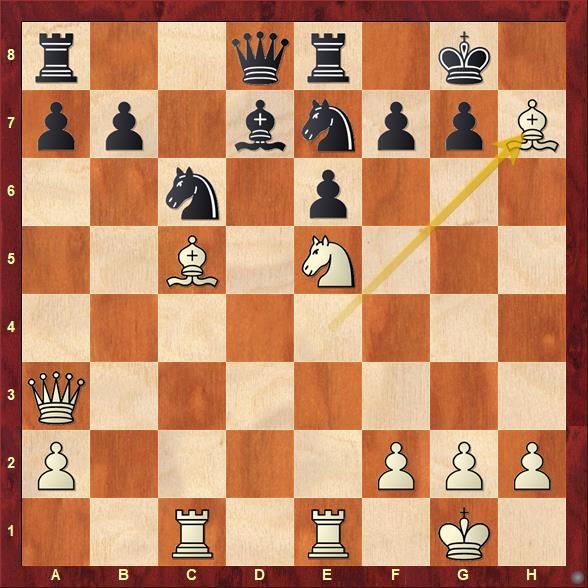 A modified version of Greek Gift sacrifice where the knight is already on e5 and queen is at a3. 20...Kxh7 21.Nxf7 Qc7 22.Bxe7 and White lost all his advantage. Since White is the one attacking and has sacrificed a piece, he needed to avoid further exchange of pieces. Instead 22.Ng5+ or Qf3 would have been better continuations for White. It just shows that it is not necessary to get good positions all the time, sometimes you have to fight back in a difficult situation and wait for your opponent to make a mistake.

Shakhriyar Mamedyarov made a short work of Richard Rapport in just 16 moves. Black is completely winning in the above position. Find out the beautiful finish which Mamedyarov executed in the game.

The world champion Magnus Carlsen opted for the Modern Defence against Arjun Erigaisi. It was the same line, Arjun had trouble at the last event, Julius Baer Generation Cup. However, this time Arjun came prepared and did not repeat the same mistakes. 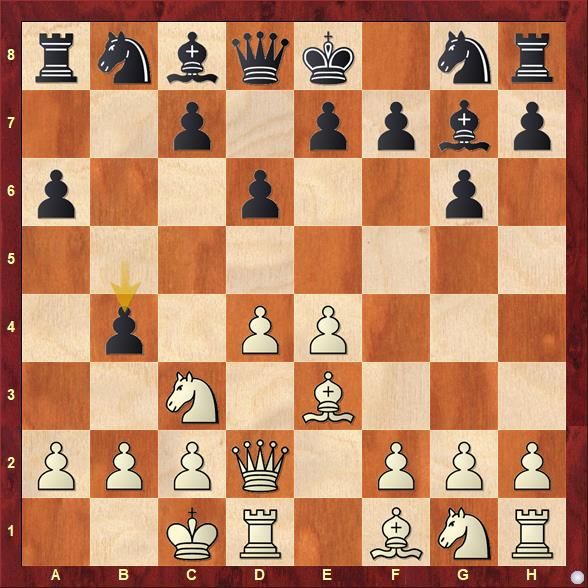 This time Arjun did not retreat his knight back to b1. He went 7.Nd5 and showed that he has improved his knowledge in this line than the last time. 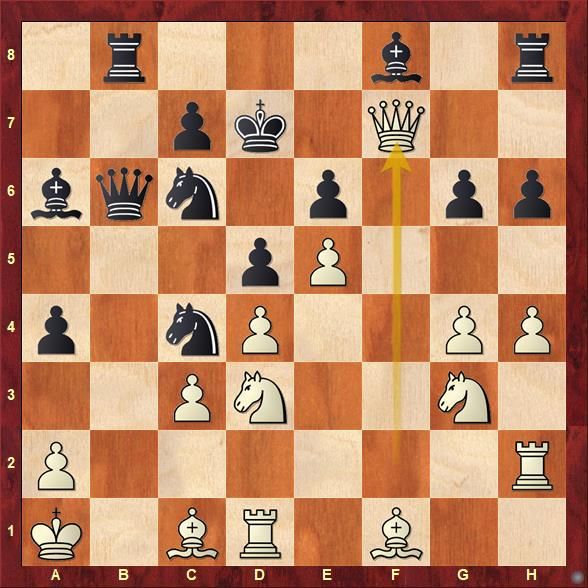 27...Kd8 would have kept things balanced as White can neither take the e6 nor the g6-pawn due to Qb1# threat. Thus, moving the king was the best idea. However, Black made the mistake of playing 27...Be7 28.Nc5+ Kd8 29.Qxg6 N6xe5 30.Nxe6+ Kd7 31.dxe5 Qxe6 32.Qe4+ and White gained a substantial advantage. Arjun went on to convert his advantage and beat the world champion for the very first time.

Gukesh seized his opportunity when his opponent Nils Grandelius made a tactical error. 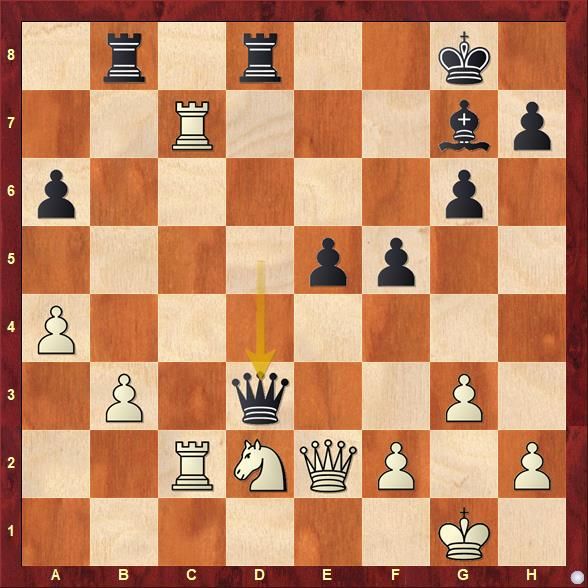 Find out the winning continuation for White after 30...Qd3.

Magnus Carlsen is always very dangerous especially after he has lost a game. It seemed like his game against Vidit Gujrathi will meander towards a draw as White cannot make a breakthrough. The world champion once again showed that he does not believe in fortresses. 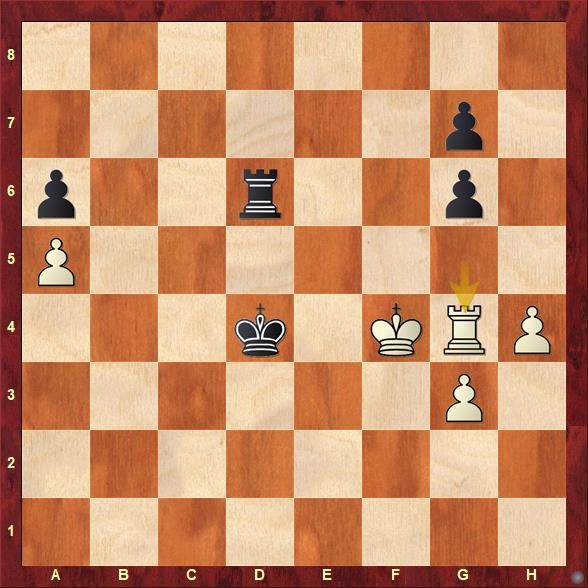 The one thing Black should not do here is play 54...Rf6+ which is exactly what he did. 55.Kg5+ Kc5 56.Rf4 and now White invades on the seventh rank with his rook. So what should have Black done instead? 54...Kc5 the king gets out of the discover check threats and stays closer to the a5-pawn.

Arjun Erigaisi drew with the FIDE World Cup 2021 winner, Jan-Krzysztof Duda. Despite being worse for the better part of the game, Arjun managed to escape with a draw in an interesting game.

IM Aditya Mittal finished the day with a victory over Germany no.1 Vincent Keymer. 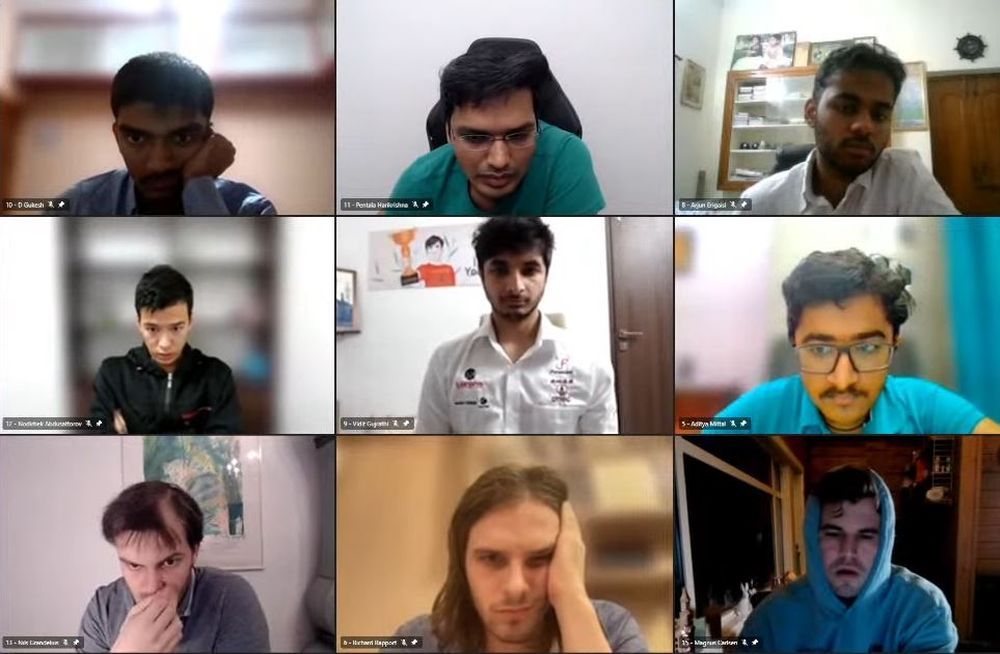