The 2016 National under-15 took place four months ago in Delhi. Mitrabha Guha and Harshita Guddanti emerged as the champions in the open and girls section respectively. "Somehow under the workload of different articles and projects I wasn't able to complete this report," says IM Sagar Shah. "But the quality of the content was so high that I wanted to publish it in spite of the delay." So here you have it - the under-15 National report rich with annotated games, pictures and anecdotes. Hope you enjoy it!

The 42nd National under-15 Championships in the Open category and the 33rd National under-15 for Girls were held from the 20th to the 28th of November 2016 at the Indira Gandhi Indoor stadium, New Delhi. It was an exciting event with some of the best sub-junior players of our country fighting out against each other for the top spot. 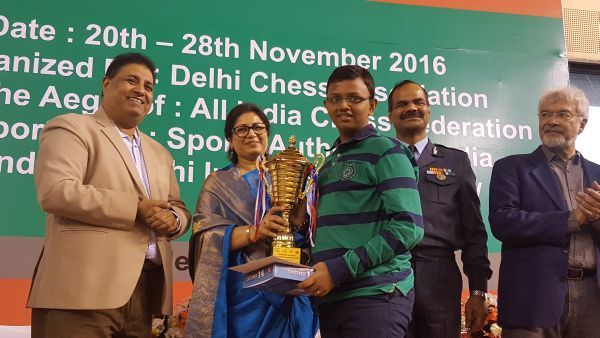 In the end it was Mitrabha Guha from West Bengal, 12th seeded at the event, who emerged victorious

Mitrabha played phenomenal chess and score 9.5/11 to win the tournament by a half point margin. He even gained 98 Elo points. Gaining so many points at an Elo of 2250 is truly outstanding. Apart from the top prize he also won a copy of ChessBase 14. Here is his favourite game from the event: 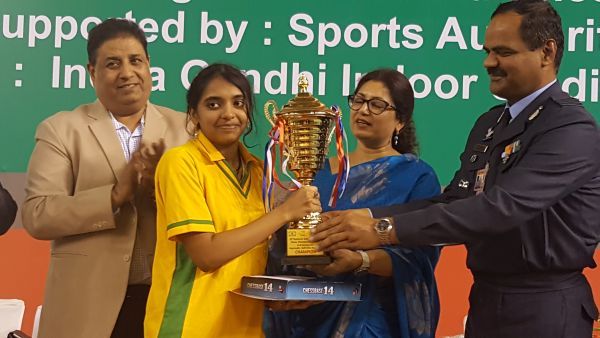 In the girls section fifth seeded Harshita Guddanti made a dash towards the finish line scoring four wins and taking the winner's trophy with 9.0/11

Harshita is a tenth standard student and loves the games of Garry Kasparov. She is currently being trained by IM Satyapragyan Swayangsu. When asked to send us her favourite game, she chose the one against Sanskriti Goyal from the last round that helped her win the event. 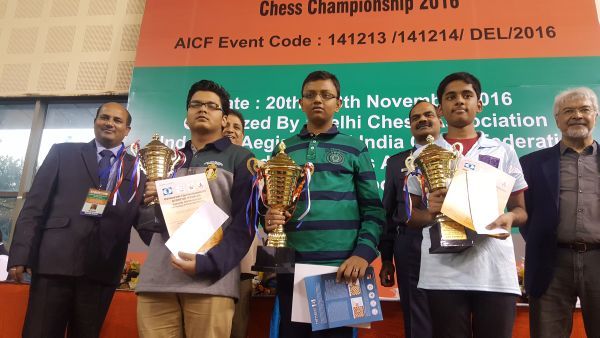 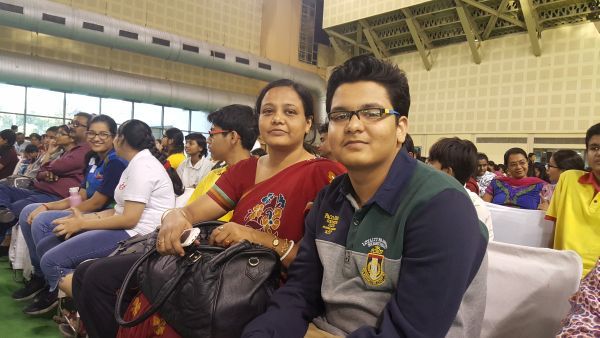 Rajdeep Sarkar with his mother at the end of the event

It was a heartbreaking last round for Rajdeep. He was leading the tournament and had a drawn rook endgame against Arjun Ergiasi. However, he made a wrong king move and that was enough to make him settle for the bronze instead of the gold. This last round clash between Arjun and Rajdeep is filled exciting moments and has been annotated by Arjun for us. 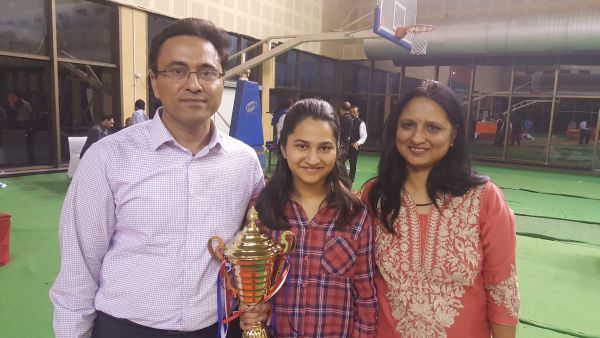 Vantika Agarwal with her parents. The girl from Delhi finished second.

For Vantika it was a case of being too solid. The maximum wins tiebreak ensured that with seven wins and four draws she had to settle for the silver. She was surely a tad upset at this result especially because she was leading through most of the event. Here's her round three victory over Rajashree Rajeev. 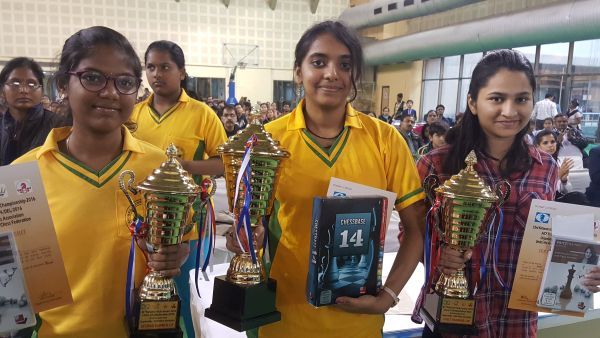 Toshali scored 8.0/11 to finish third. Here's her favourite game from the event, her fourth round win against Rutvi Shah. 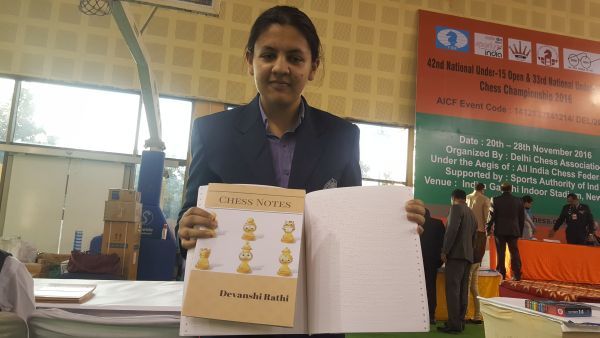 There are a few individuals who work without any noise. Quietly, but with great purpose they make a difference in the overall scheme of things. Devanshi is one such person who is doing some exceptional work. She is the founder of Project Checkmate. She started this project with the aim to help the under-privileged children through the game of chess. It has now ventured into teaching chess to the blind at the National Association of the Blind, New Delhi.

Devanshi's book called ‘Chess Notes’ was converted into a Braille version for the visually impaired children to read and learn chess. She worked regularly with a few students before their national tournament and on Skype during the event. 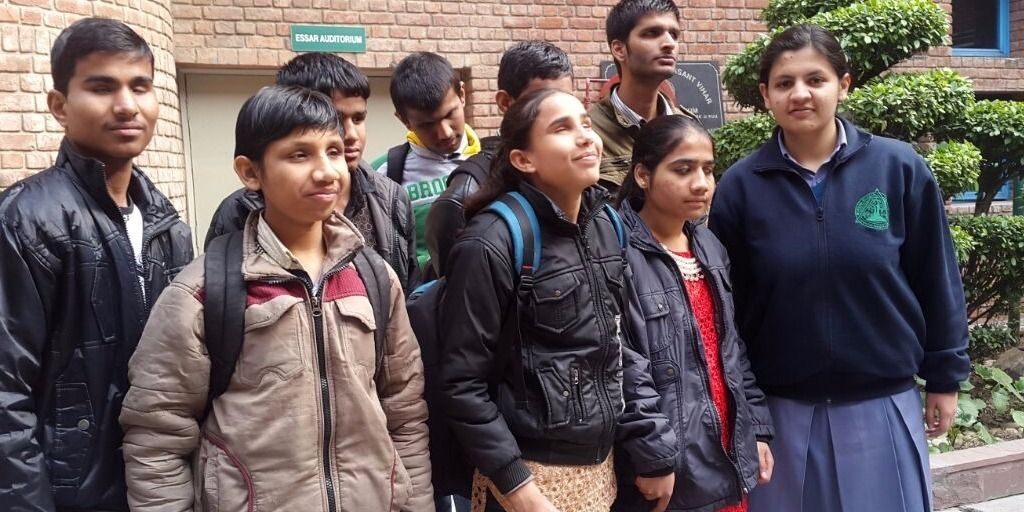 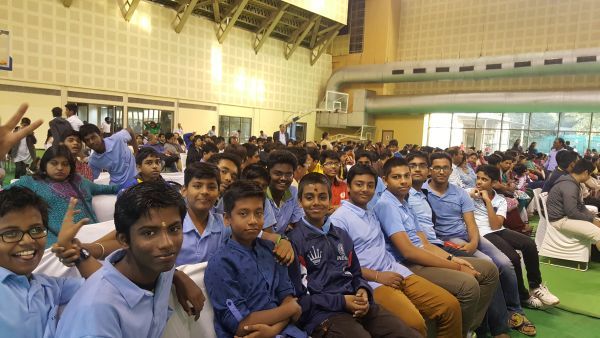 The boys from Tamil Nadu 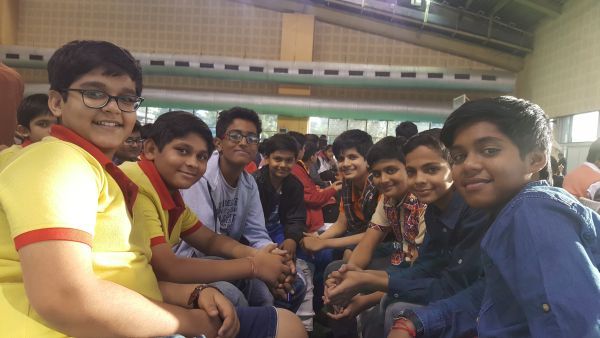 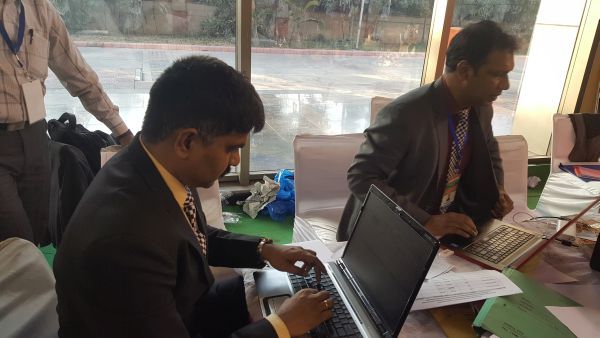 This man is the backbone of Delhi Chess. You will more often than not find him busy doing some work or the other. Always busy yet full of energy - meet Gopakumar Sudhakaran! 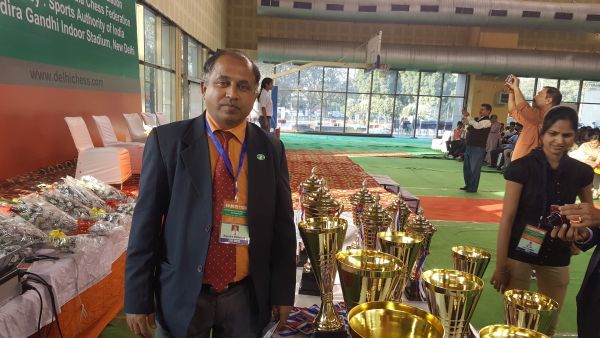 Rajendra Shidore was the chief arbiter for the event 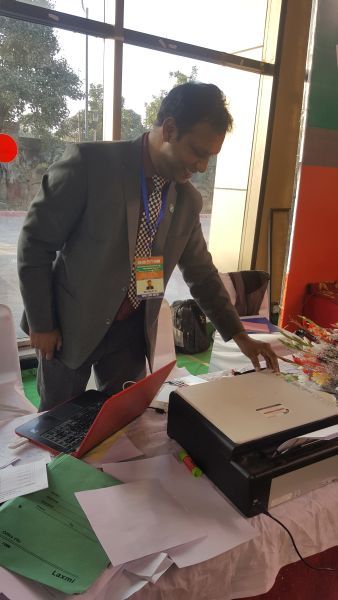 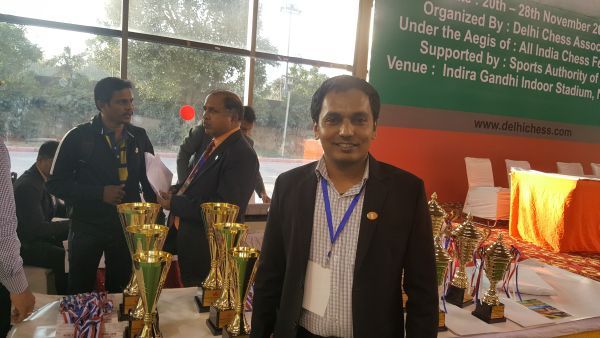 Jitendra Choudhary is a FIDE Arbiter, a chess coach and now also a contributor to ChessBase India. A multi-talented personality! 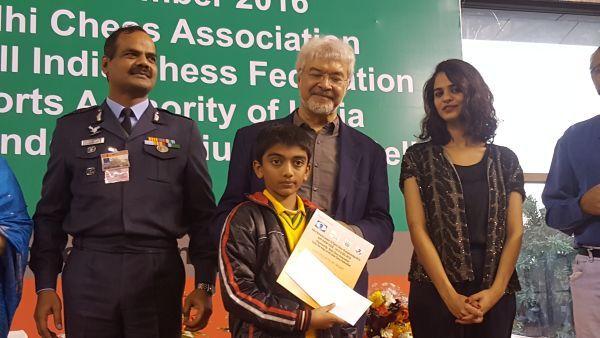 You are going to hear this boy's name for many years to come D. Gukesh. 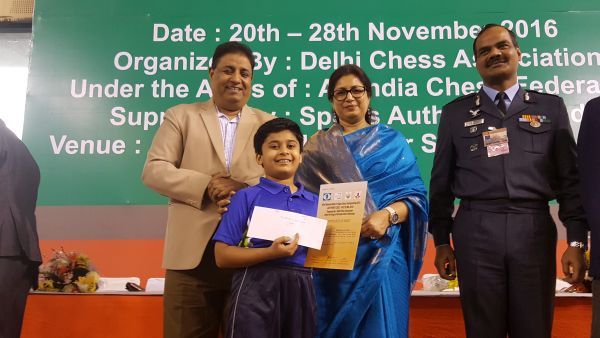 Another big talent, the very cute Leon Mendonca from Goa 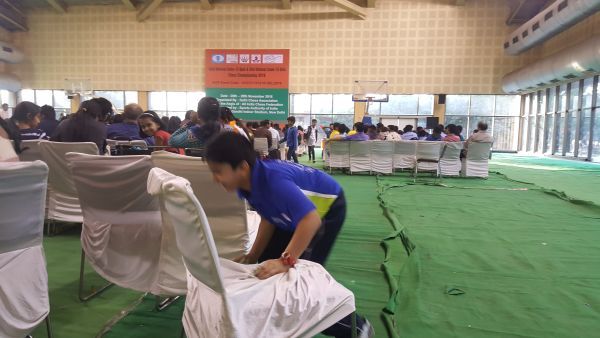 Leon trying to use his chair to hide... 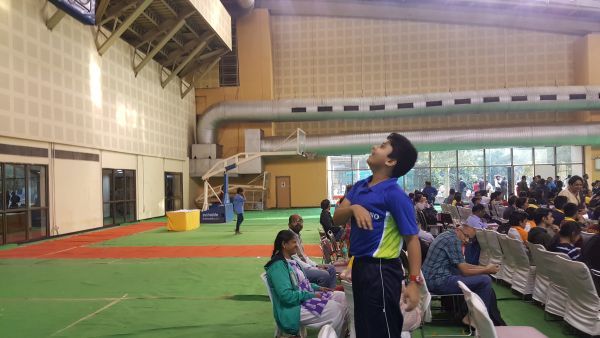 ....and now to play basketball! What happened to chairs being used for sitting! 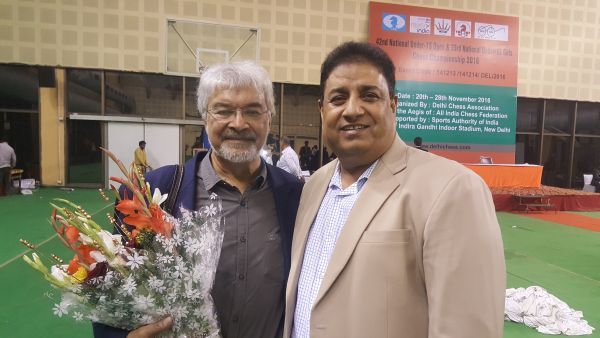 Two great individuals captured in one frame: Frederic Friedel (left) co-founder of ChessBase and Bharat Singh Chauhan, AICF CEO and the reason why Delhi Chess Association is doing so well.

Frederic Friedel was in India during the event for the promotion of ChessBase India, Fritz and Chesster and also to speak at the Bookaroo Chess Festival. When the co-founder of ChessBase is present... 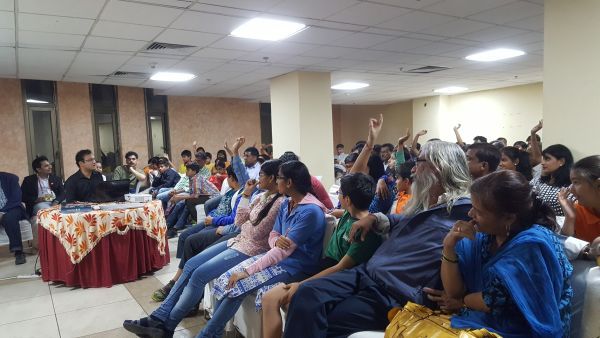 ...there has to be a ChessBase workshop! The workshop was well attended by over 100 people.
14 minutes of the lecture recorded 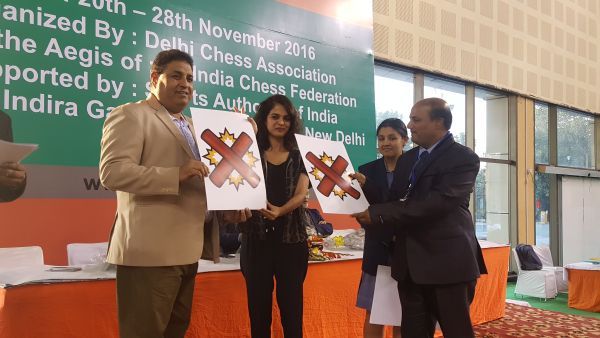 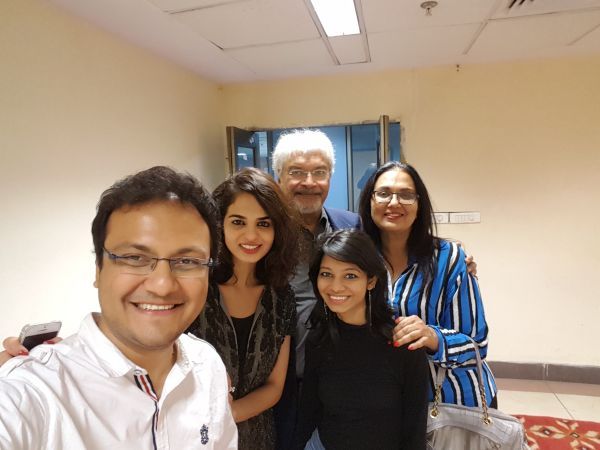 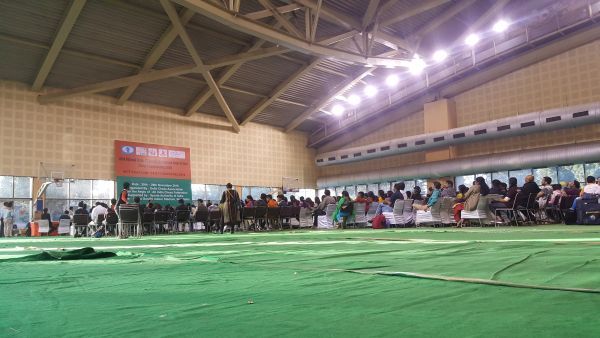 An excellently organized National Championship came to an end.

Final Ranking of Open after 11 Rounds

Final Ranking of girls after 11 Rounds