The Pre Quarter-Finals of Vidit Chess Tour witnessed two big upsets and they were caused by two young talents from Kolkata, West Bengal - IM Aronyak Ghosh and IM Mitrabha Guha. While Aronyak scored a convincing 1.5-0.5 victory over GM Abhijeet Gupta, Mitrabha bounced back strong after suffering a loss to beat GM Abhimanyu Puranik 2-1 with a victory in the Armageddon. IM Pranesh M was impressive against GM Praggnanandhaa but he just faltered early in the Armageddon. Quarter-Finals will take place today on chess24 from 7 p.m. IST. Photo: Shahid Ahmed

Pranesh gives a scare to Praggnanandhaa

IM Aronyak Ghosh and IM Mitrabha Guha causes the biggest upset in the Pre Quarter-Finals of Vidit Chess Tour. Aronyak eliminated GM Abhijeet Gupta 1.5-0.5 and Mitrabha knocked out GM Abhimanyu Puranik by winning the Armageddon 2-1. IM Pranesh M got good chances in the first two games but he could capitalize in only one and got eliminated by Praggnanandhaa. Narayanan, Visakh, Gukesh, Arjun Erigaisi and Harsha Bharathakoti are the remaining five GMs to advance to the Quarter-Finals.

GM Narayanan S L won both games against IM Sammed Jaykumar Shete to advance to the Quarter-Finals. In the first game, Sammed made a tactical oversight. 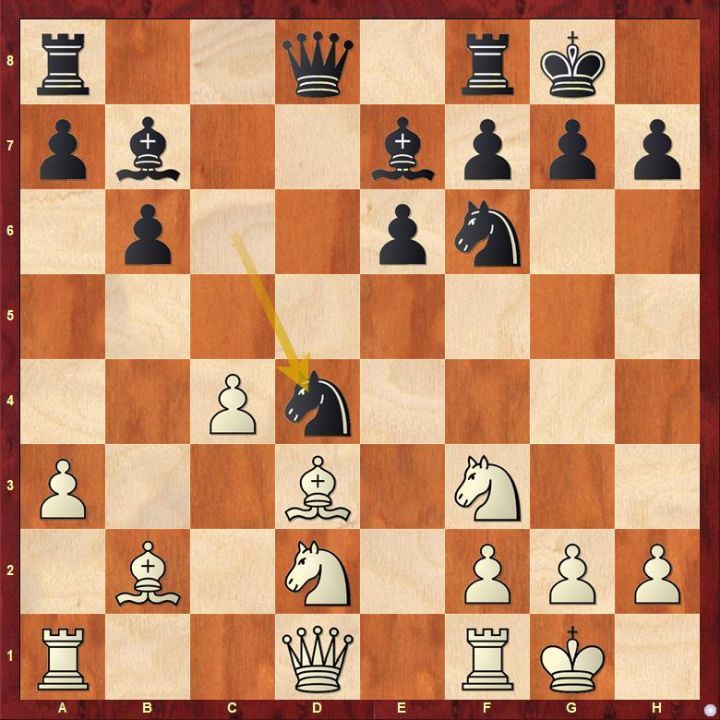 Black sacrificed on d4 with the hope of recovering the piece on d-file with e5 but it does not work. Why?

In the second game also, Sammed made a tactical error which cost him an exchange and eventually the game. 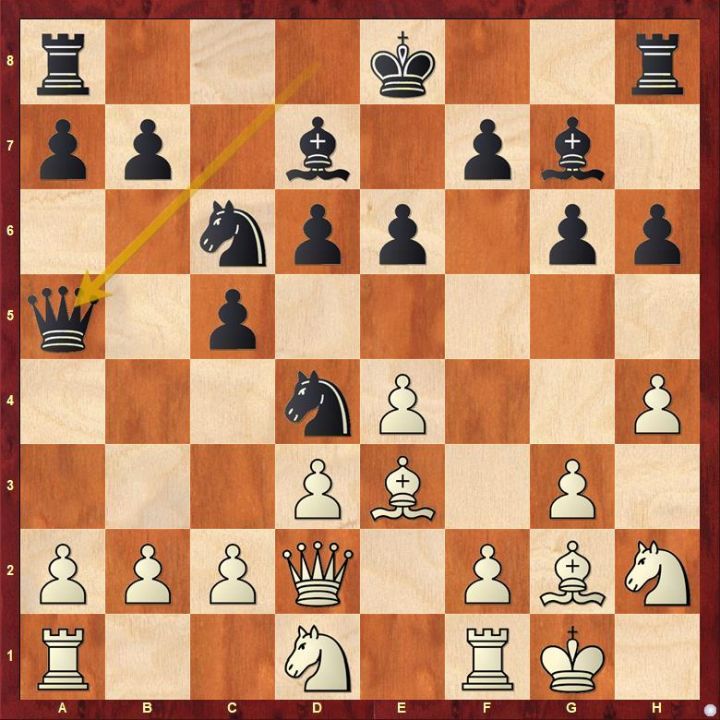 White just needed to trade queens with 13.Qxa5 and it would have been fine but the game went on with 13.c3 and everything fell apart after 13...Nb3. With this win, Narayanan advanced to the Quarter-Finals.

Diptayan and Visakh drew their first game after a grueling 97-move long battle. However Diptayan had some chances which he should have taken. 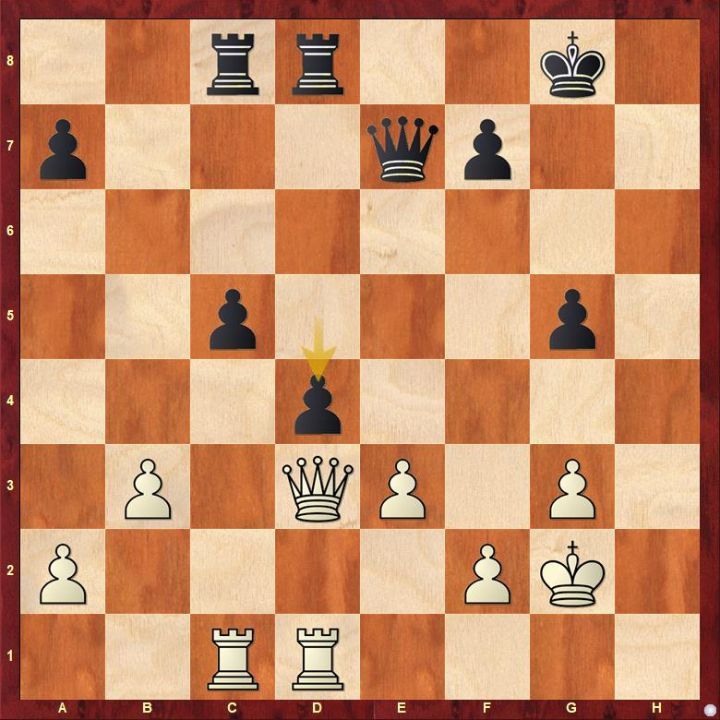 27...d4 is a mistake. What is the best continuation for white here? 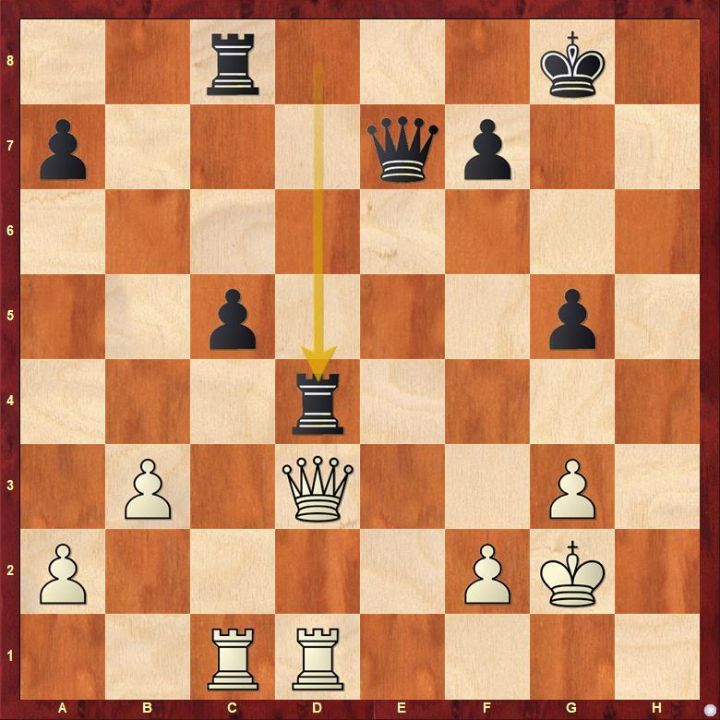 29.Qxd4 is an option and it was played in the game. However it was not the best choice for white. What should have white done instead?

Just when it seemed like the second game will also end up in a draw, Visakh erred in the game and Diptayan capitalized. 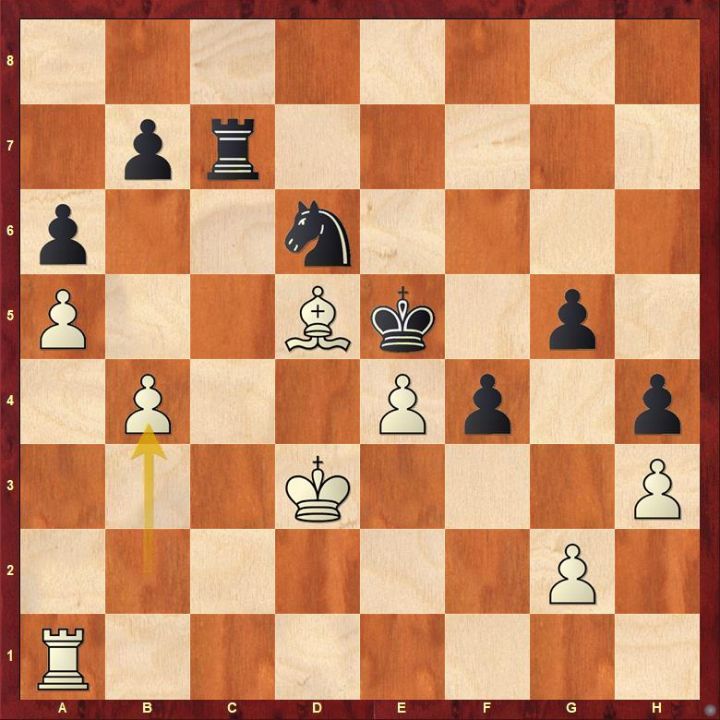 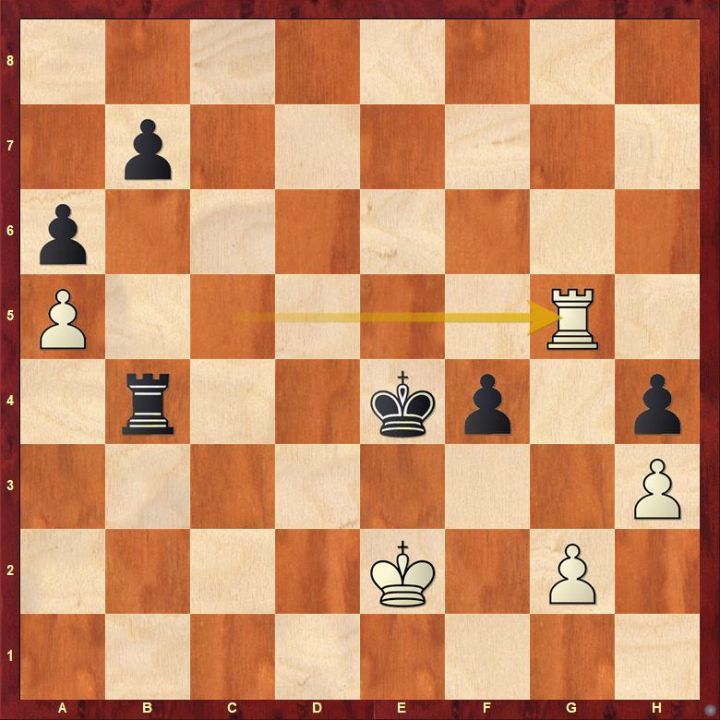 Black is completely winning here. How should black continue after 46.Rxg5. The game continued with 46...Rb5 which certainly did not help black's case. Eventually the game ended up in a draw in another 14 moves.

Diptayan-Visakh encounter could not yield a result in both of their games, thus Armageddon was enforced. 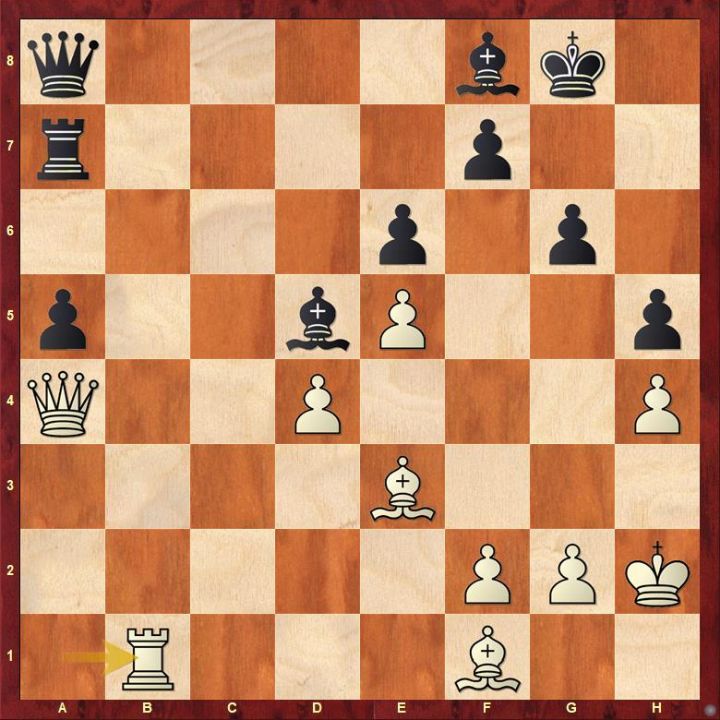 White's position started falling apart after 56.Rb1. The game continued with 56...Bc6 and white was forced to play 57.Bb5 otherwise the passed a-pawn would have become a monster. Eventually Visakh missed a couple of simple tactics, thus the game ended up in a draw. However, as per Armageddon rules, black advances in case of a draw. Thus Visakh advanced to the Quarter-Finals and he will face GM Narayanan S L.

GM Visakh N R had a bumpy start but still managed to advance to the Quarter-Finals | Photo: Amruta Mokal

Mitrabha erred in the middle game which gave his opponent Abhimanyu a decent advantage. 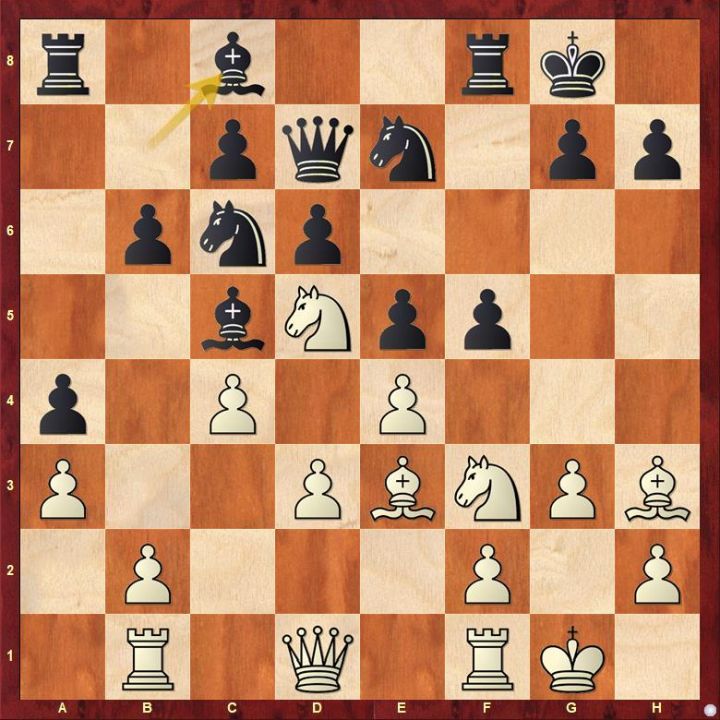 13...Bc8 provides a phantom support to the f5-pawn which does not help black.13...Qd8 or Kh8 would have been a better choice probably. 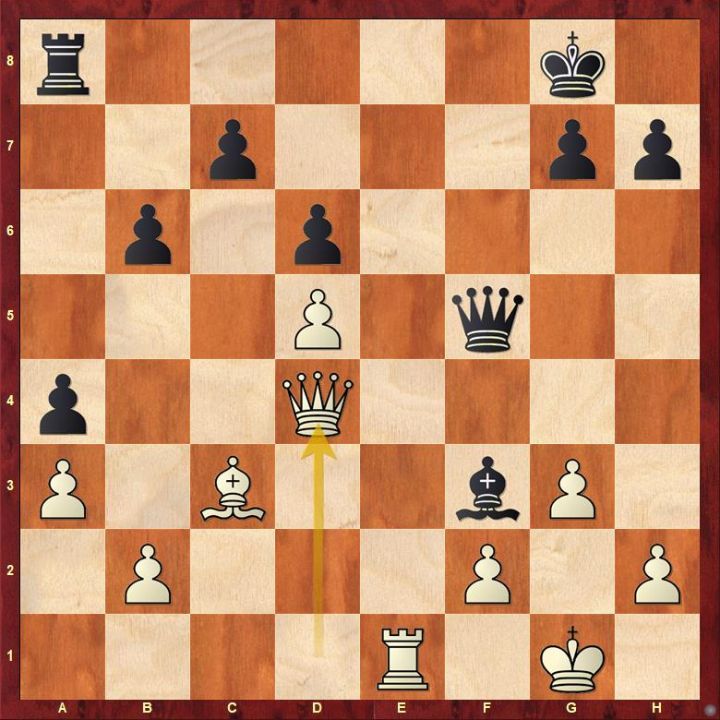 Mitrabha managed to recover but he got disconnected after 25.Qd4. Black is not losing here as the threat at g7 can be defended.

The IM bounced back and delivered an equalizer by winning the must-win second game against Abhimanyu. He had a good position for the better part of the game but he allowed his opponent to equalize. 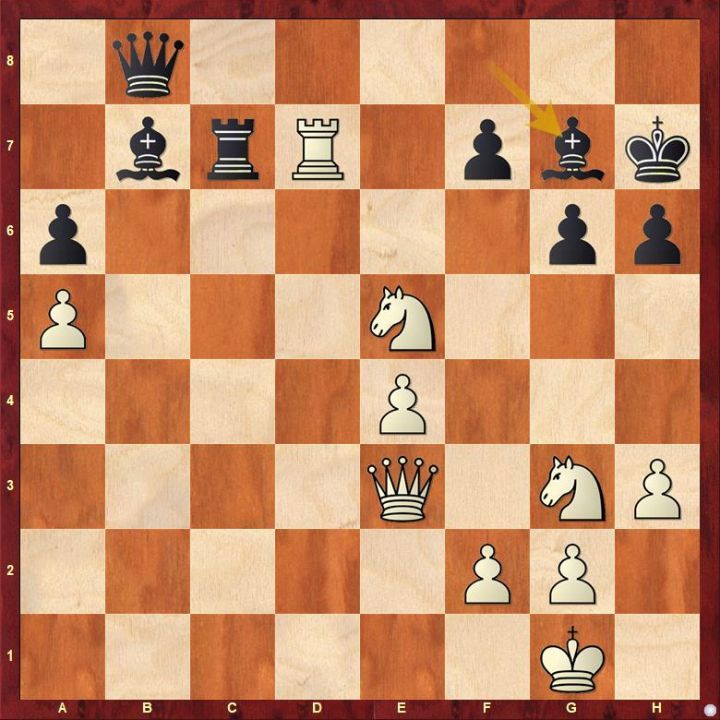 The game continued with 34.Rxf7, however there was a better continuation for white. What is it? Eventually Abhimanyu ran out of time and the score became a 1-1 tie in a seemingly equal position.

After the first two games ended up in a victory each for both Mitrabha and Abhimanyu, Armageddon was in order. Mitrabha got black pieces in Armageddon which means he just needed a draw to advance, however he pounced when an opportunity was presented and converted it into a victory. 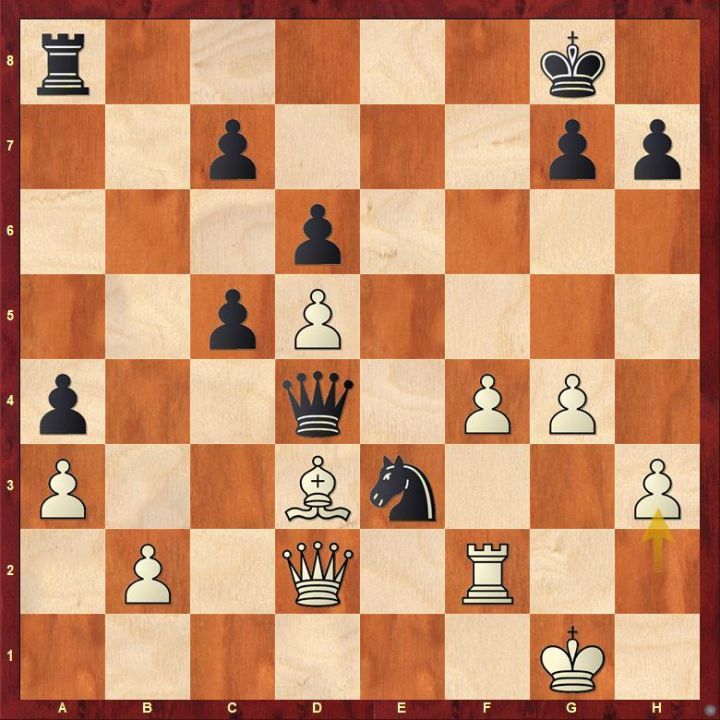 In an already difficult position, Abhimanyu caused further damage to his position with 26.h3. Black played the obvious 26...Nd5 and won the game in another eight moves.

Mitrabha made a great recovery and advanced to the Quarter-Finals | Photo: Shahid Ahmed

The first game between the student Gukesh and coach Vishnu ended up in a hard-fought draw. Even in the Queen ending, Gukesh kept pushing for an advantage but Vishnu made sure that he does not make any mistake.

The second game was a short 28-move draw. However the final position was in Vishnu's favour.

Gukesh playing with white pieces was in a must-win situation against Vishnu. He erred first which his opponent almost caught him. 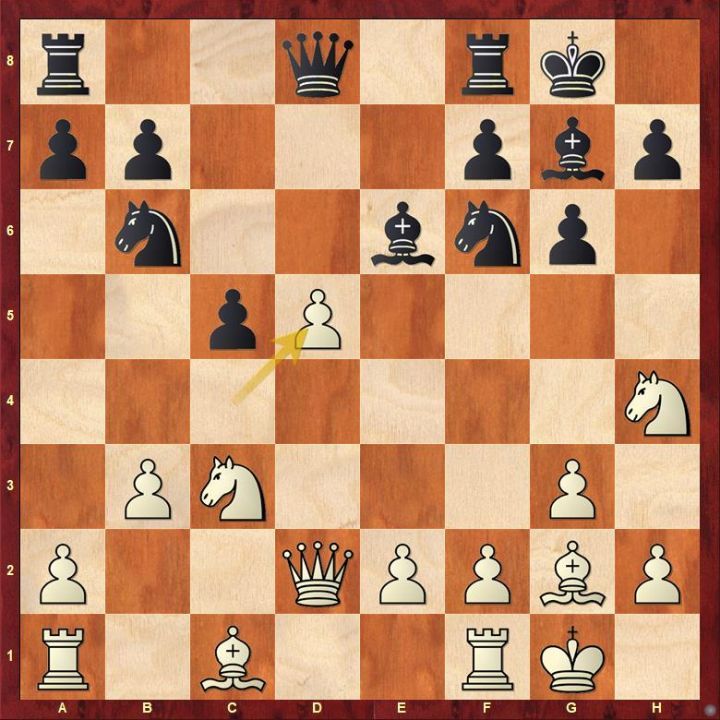 White was not forced to play 14.cxd5. What should have white played instead? 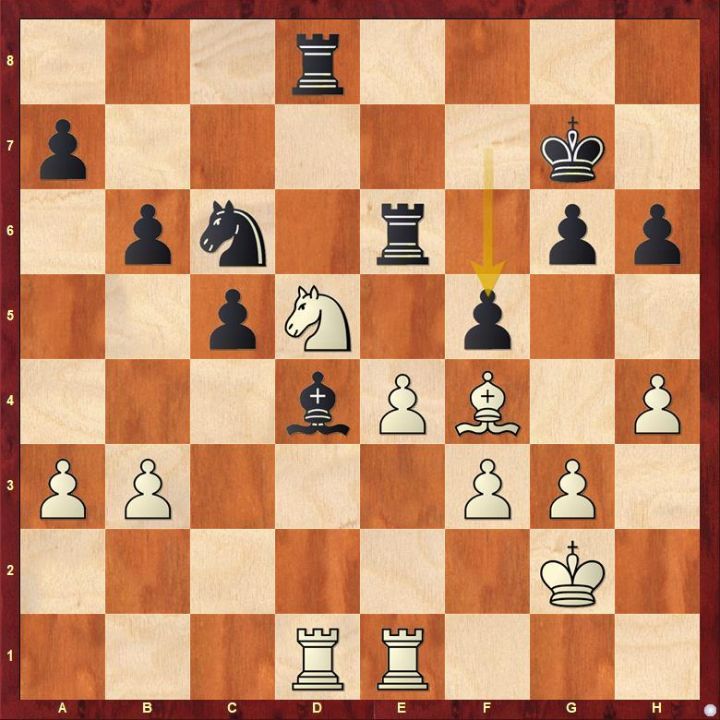 29...f5 was the obvious game losing blunder. Black should have played something quiet like 29...Be5 or Rd7 to hold the position. With this win, Gukesh advanced to the Quarter-Finals where he will face IM Mitrabha Guha.

GM Arjun Erigaisi capitalized on his advantage against IM Arjun Kalyan with ease in the first game to score a victory. 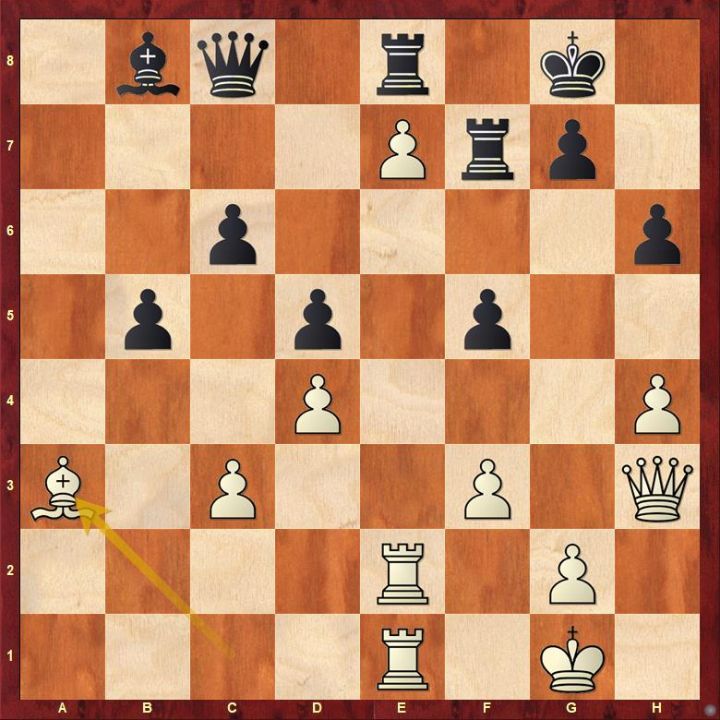 White is in full control of the position. Black needs to make sure that further damage is avoided. 29...Qd7 did not help black. What should have black done instead?

Arjun Kalyan launched a devastating attack which rattled Arjun Erigaisi as he could not find the best defence initially. 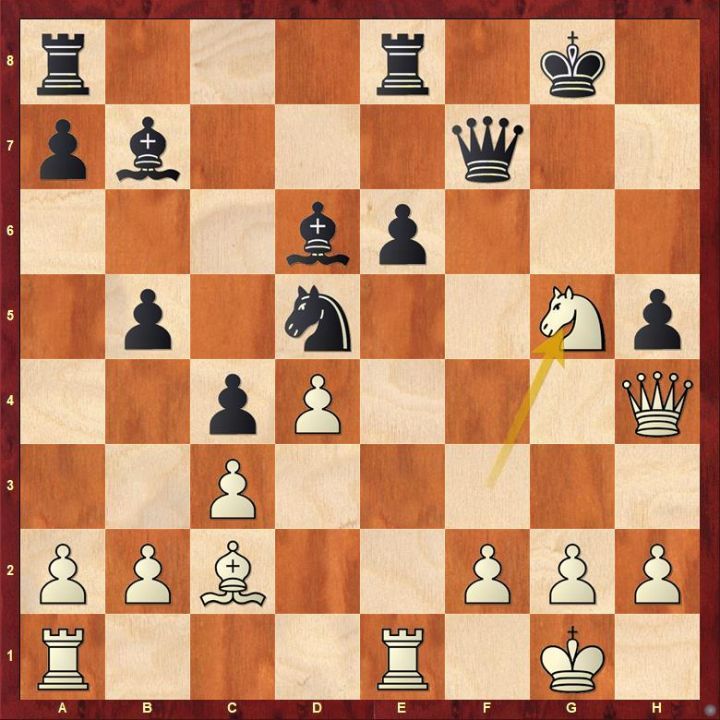 Black's kingside is completely shattered but it's not over yet. What is correct way for black to continue after 23.Nxg5 ? The game went on with 23...Qg7 which is certainly not the best choice as white can continue his relentless attack. Soon after white blundered and black increased his advantage which he had no trouble converting into a victory. Thus Arjun Erigaisi advanced to the Quarter-Finals.

GM Praggnanandhaa won a topsy-turvy battle against IM Pranesh M. Both sides made plenty of inaccuracies where Pranesh made a good recovery and was almost on the brink of victory but he made some heavy mistakes which cost him the game. 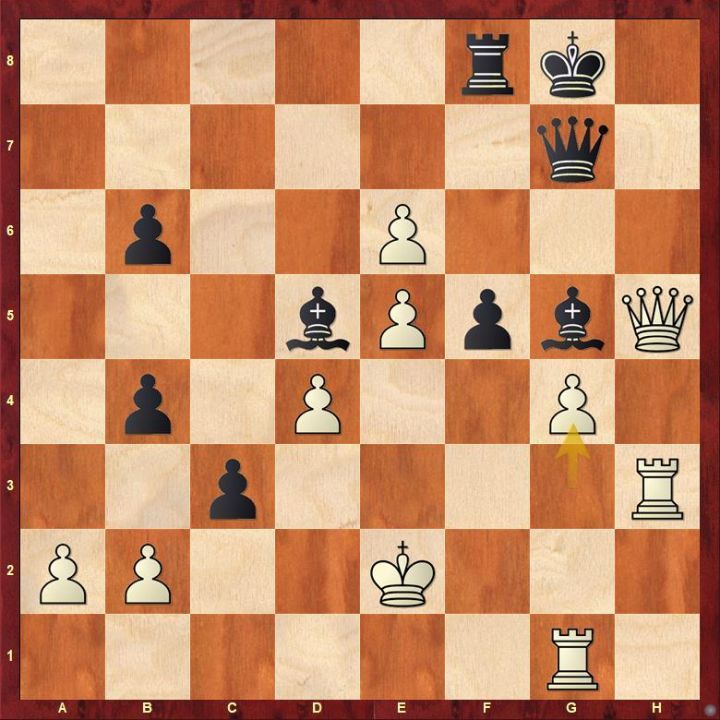 The above position is absolutely volatile, surprisingly it is black who can wreak havoc. Find out the best continuation for black after 36.g4. Pranesh missed it and eventually lost the game.

In another roller coaster of a battle, Pranesh went wrong early in the opening. 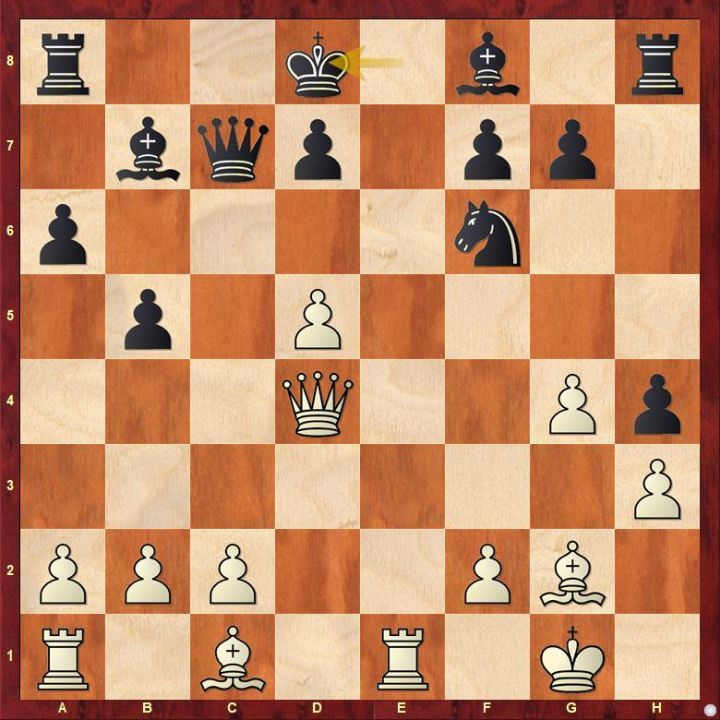 The simplest way for white to recover the lost piece is by playing 15.d6. However Pranesh went 15.Bg5 and after 15...Bc5 black is in complete command except the balance of power kept shifting between both players for the rest of the game. 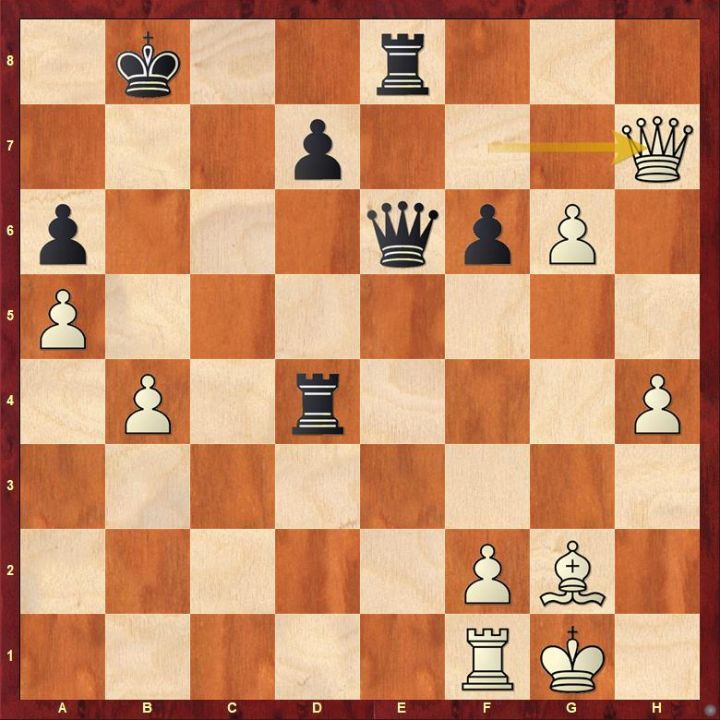 Black can still bring the full point home after 39.Qh7. How?

Pranesh went completely wrong in the opening in Armageddon and could not make a comeback for the rest of the game. 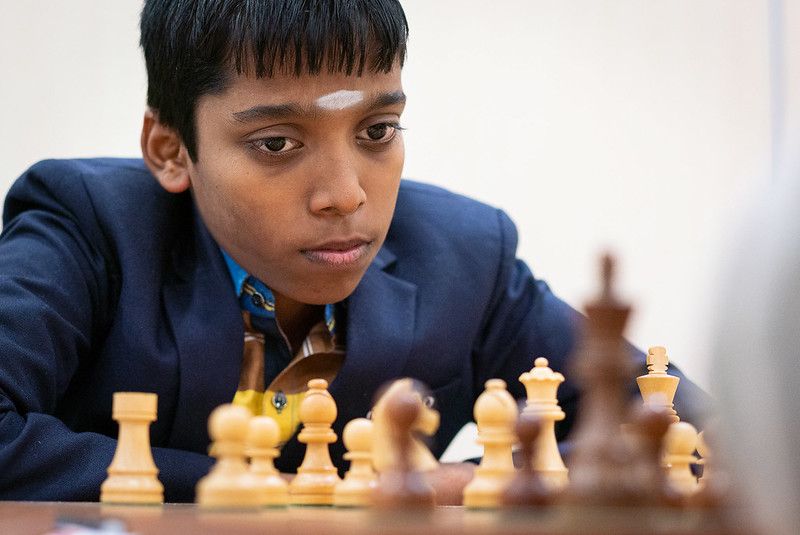 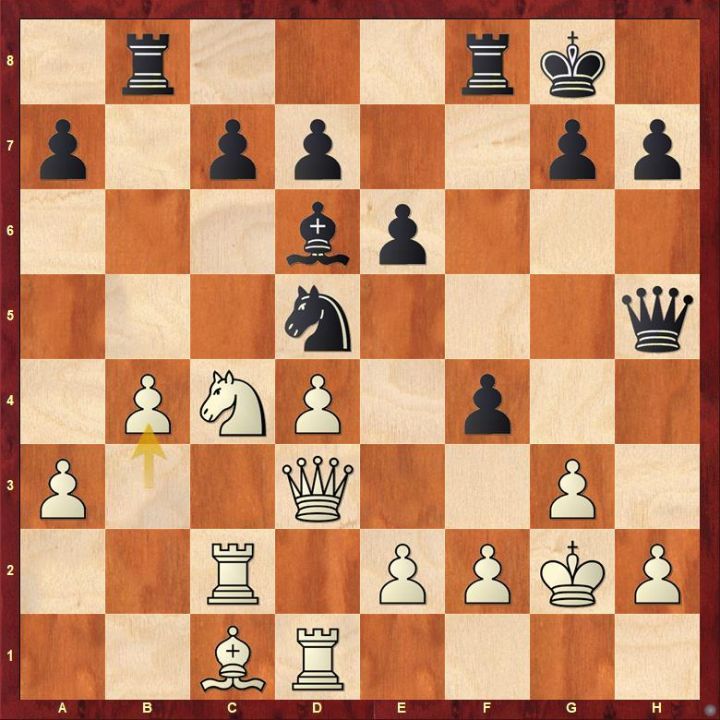 Find out why 24.b4 is a huge mistake and what white should have done instead.

In the second game, Raunak made an incorrect recapture which gave Harsha a tangible advantage, however he could not maintain it for long. 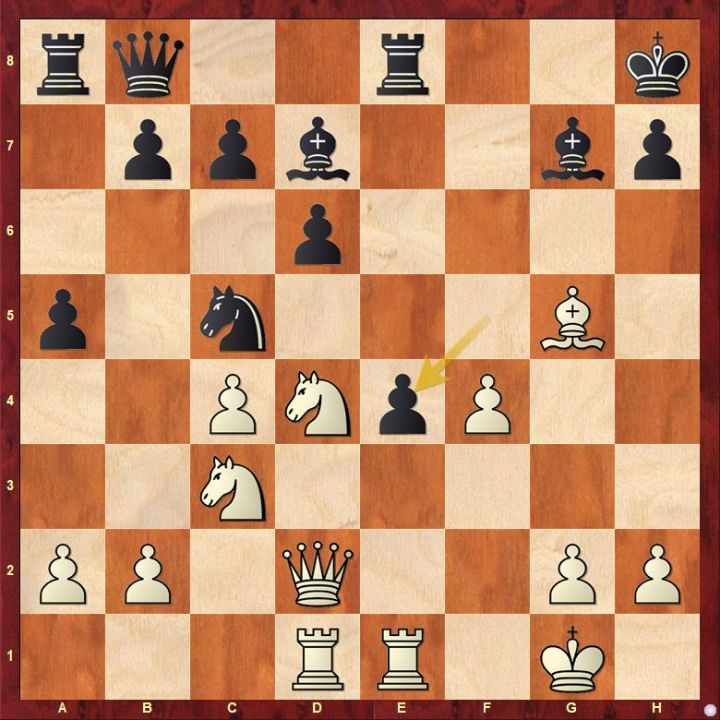 20...fxe4 allowed white to push 21.f5 and create some chances on the kingside. Raunak managed to equalize eventually but he blundered in the seemingly equal endgame and lost the game. Thus Harsha advanced to the next stage.

GM Abhijeet Gupta was held to a well fought draw by IM Aronyak Ghosh in the first game.

Abhijeet got his pieces all tied up in a cramped position and he was forced to 'undevelop' his pieces to try and free them up. Unfortunately for him, things did not work out and he lost the game. Thus Aronyak advanced to the Quarter-Finals. 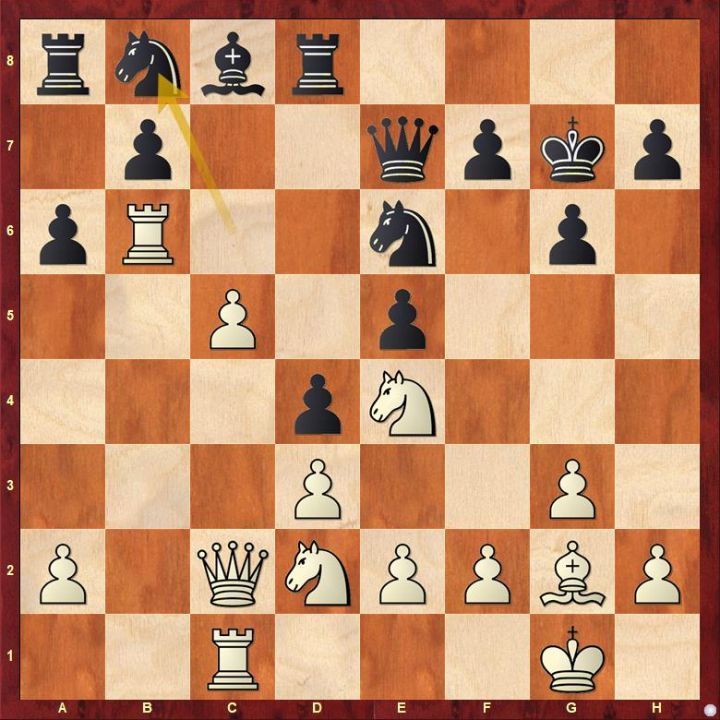 When black has to play 23...Nb8, you can understand that something has gone terribly wrong for black. Shortly black had to play Ra7 also and the game was wrapped in another ten moves.

Aronyak beat Abhijeet convincingly to setup a clash with Harsha in the Quarter-Finals | Photo: Shahid Ahmed

Replay all games of Pre Quarter-Finals