World no.2 Fabiano Caruana bounced back from a position which was atrociously close to losing and defeated Vishy Anand to catch up with Alireza Firouzja on the leaderboard. Magnus Carlsen registered his very first victory in the tournament by beating Nikita Vitiugov after an extraordinary spell of seven draws. In the Challengers category as many as five out of seven games ended decisively. Pavel Eljanov maintained his lead by holding Nodirbek Abdusattorov to a draw, while Nihal Sarin was ousted from the chasing group by David Anton Guijarro. The eighth round of Tata Steel Chess 2020 was full of action, we bring you the highlights in this illustrated report.

Fabiano Caruana managed to trick Vishy Anand big time in the eighth round of the ongoing Tata Steel Masters in Wijk Aan Zee. Out of the Ragozin Variation of Queen's Gambit Declined the players entered a very complex position when Vishy sacrificed a pawn on the 12th move for counterplay. A few moves later even Fabi gave up an exchange to keep his central pawn majority intact and what arose thereof was highly unbalanced and murky at best. However, things started to roll in favour of the Indian eventually. On move 37, Fabiano erred by going for a trade of queens and suddenly the engines started to scream decisive advantage for Vishy, apparently the former had lost his compensation for the exchange. But from a practical point of view the position continued to remain very tricky. Later in the post game interview Fabiano confided that at no point did he think he was completely lost and was always vying for chances. 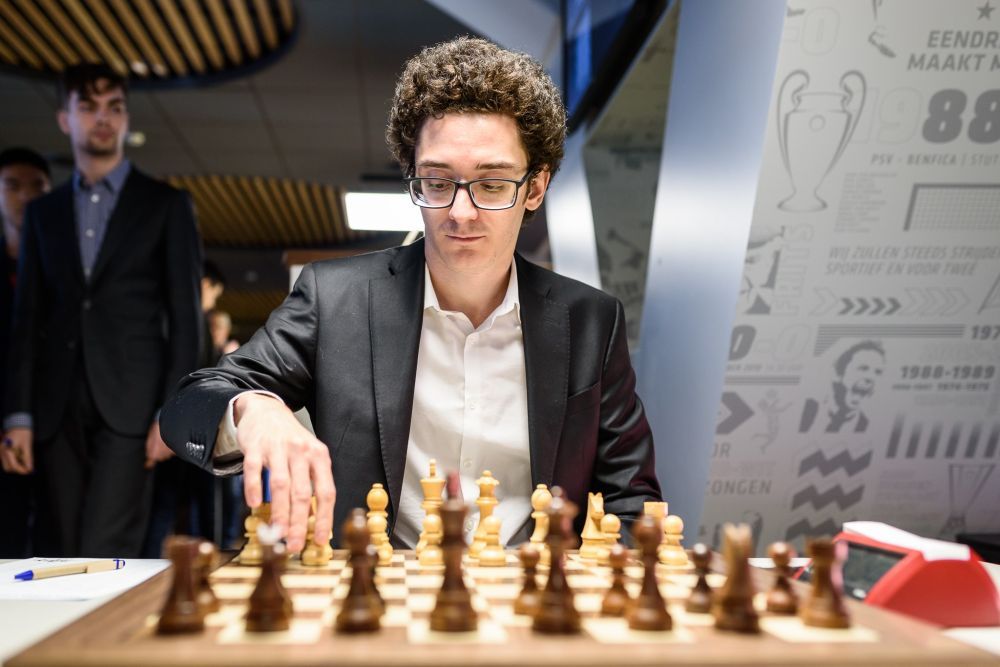 Well, Caruana's optimism did serve him to the fullest as he not only saved the game but also managed to turn the tables at the very last moment and win it! | Photo: Alina l'Ami 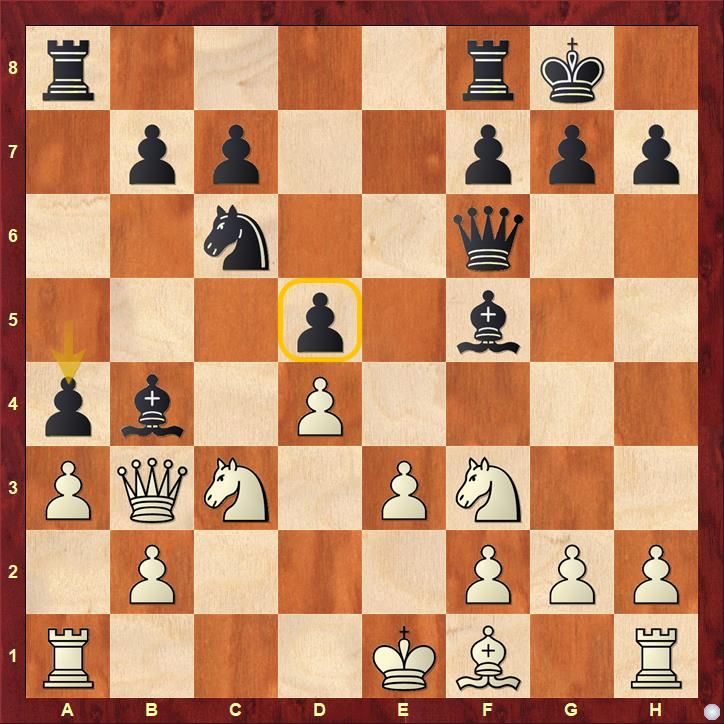 11...a4 sacrificing the d5 pawn was one of the defining moments in the game. 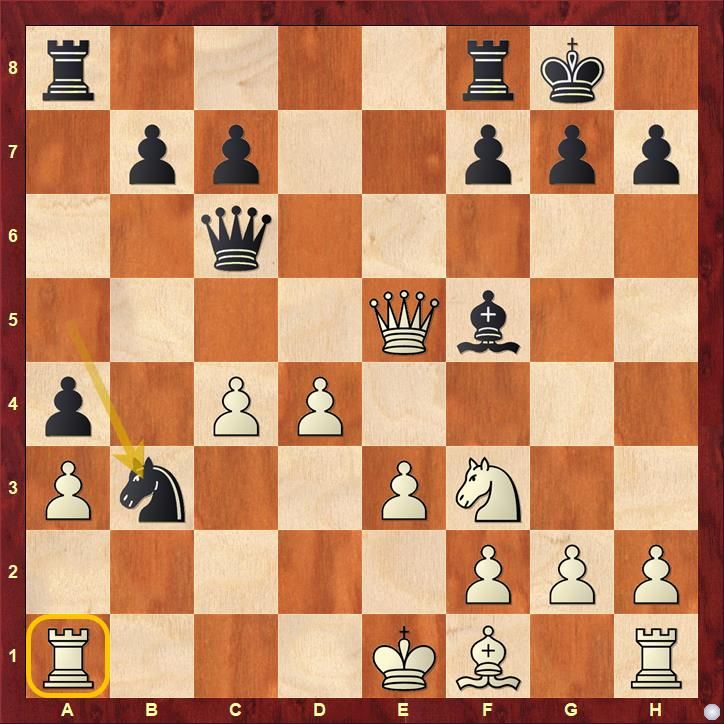 But only a few moves later things got crazier as White gave up his a1 rook in the above position to play Qxf5! 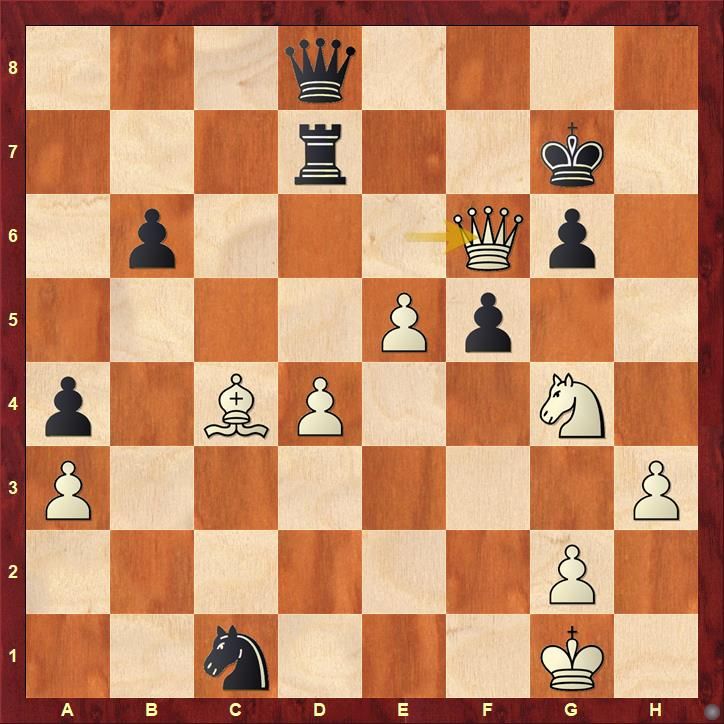 Later in the game Fabi described Qf6+ as an absolute blunder as he slipped into a totally lost position hereafter.

Magnus Carlsen broke his streak of seven draws and beat Nikita Vitiugov in the eighth round yesterday. In this game Magnus opted for the king's pawn opening with White and managed to provoke an early weakening of Nikita's kingside out of a normal Spanish. The Russian soon slipped into an uncomfortable position and to simply spare himself of a tortuous loss resigned on move 30. 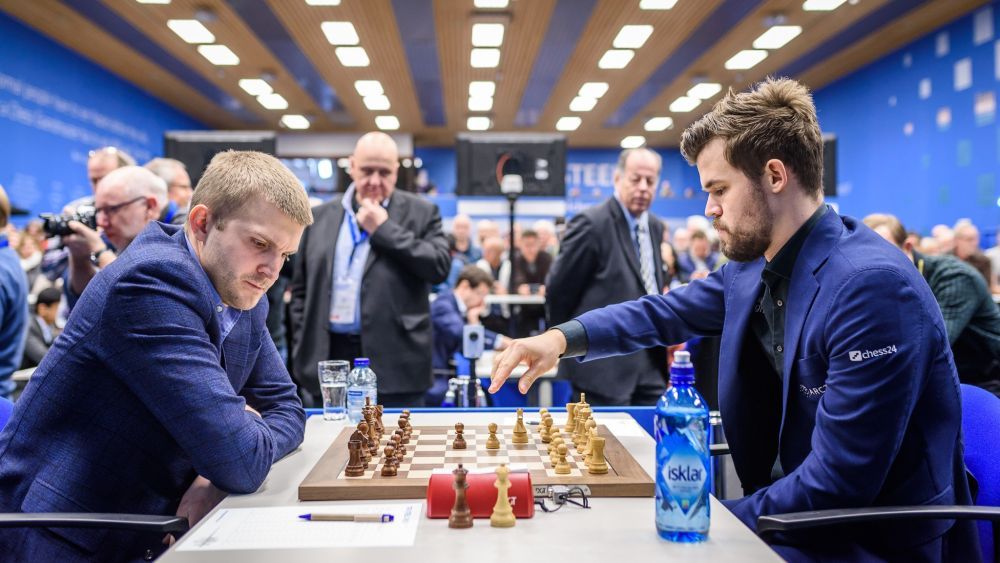 Magnus said after the game that he thought his opponent was just fed up with the kind of position he got himself into | Photo: Alina l'Ami 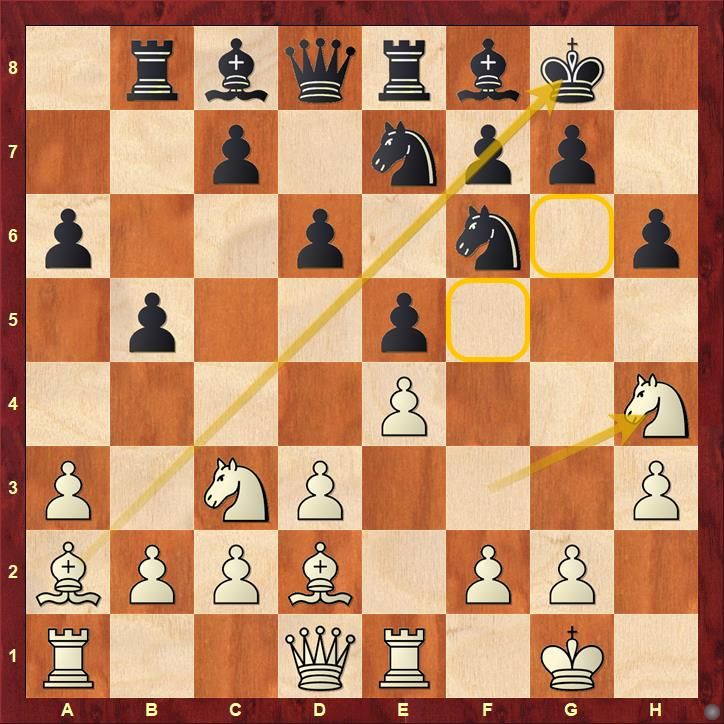 Magnus's Nh4 controlling the f5 and g6 squares in coordination with the bishop on a2 was a nice plan. Nikita thought for about 20 minutes here and decided to kick the knight away with g5, thus incurring a serious weakness on the kingside. 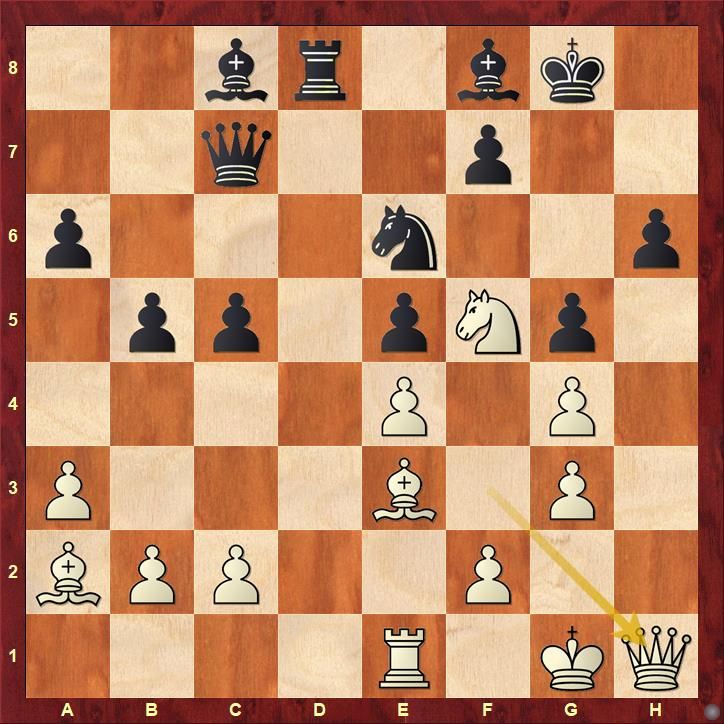 Soon the World Champion's pieces were all over the kingside. Nikita went for f6 here which worsened his position and after White played Bd5 he simply resigned in desperation. 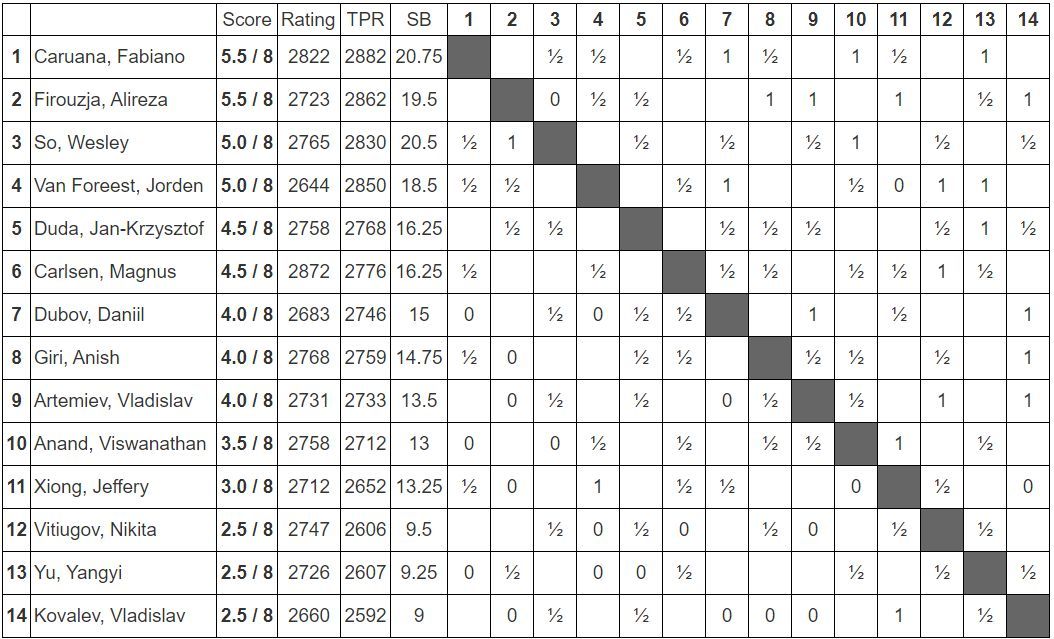 Standings of all Masters after round eight. 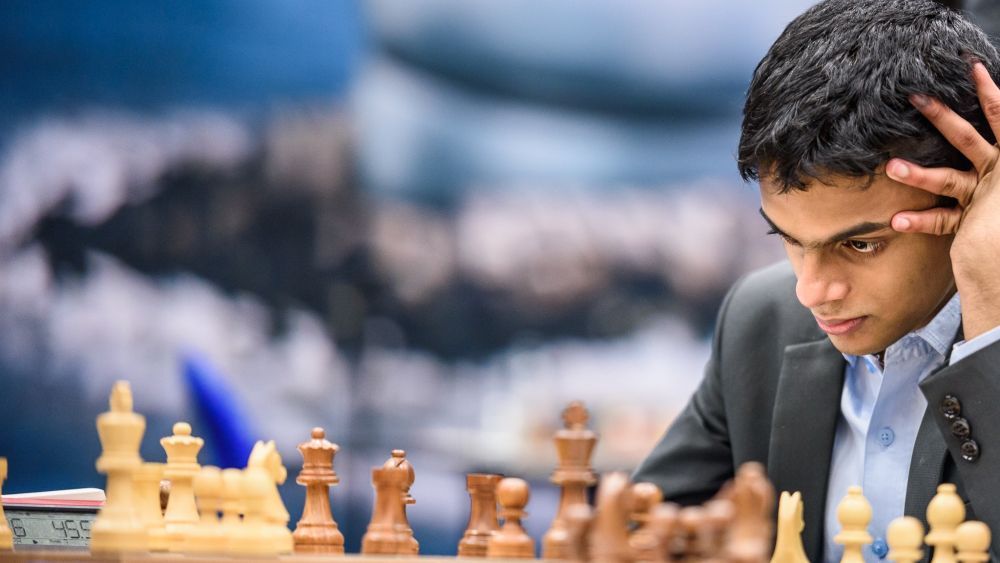 Nihal Sarin got into trouble around the point around move 20 when White got the powerful 23.Ng5 in. The 15-year-old fought on for 65 moves before calling it a day | Photo: Alina l'Ami 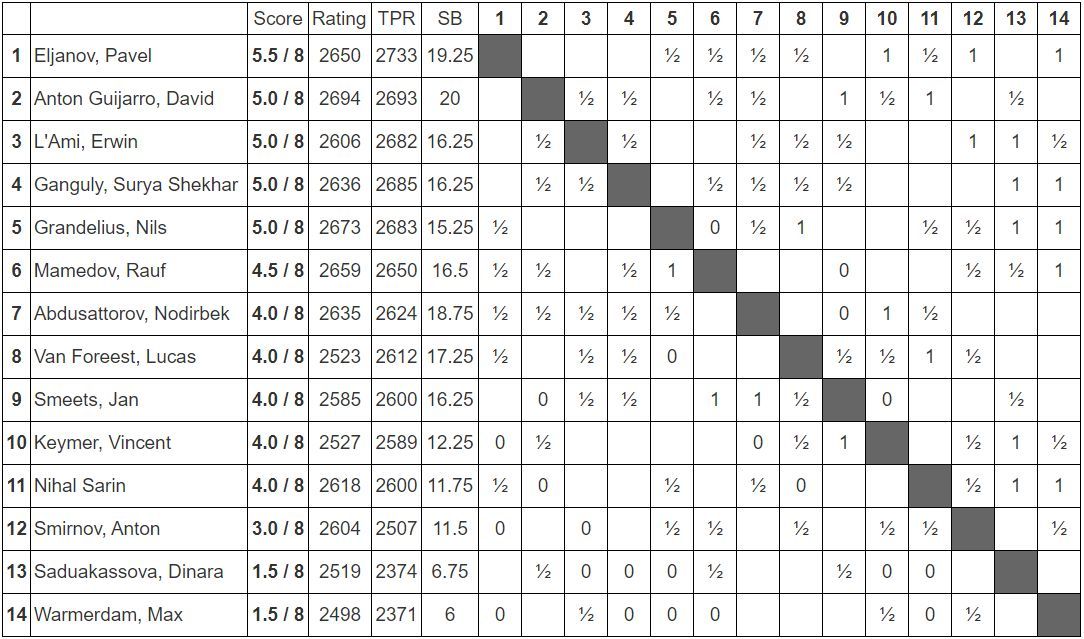 Standings of all Challengers after round eight.
Related news: