Anand on Wijk: "It's a bit like coming home"

The Tata Steel has been one of Vishy Anand's very favourite tournaments. He has played there nineteen times thus far and has bagged five tournament titles. This year, he completed 30 years since his maiden appearance there, scoring a solid 7½/13. After his final round game, Aditya Pai caught up with the Indian ace for a brief interview in the press room at Wijk aan Zee to talk about his journey. | Photo: Alina L'ami

For Vishy Anand, the Wijk aan Zee Chess tournament (aka Tata Steel Chess) holds a special place. Back in 1989, Anand had bagged his first title prize in Wijk. In the 30 years that followed, Anand went on to play the tournament eighteen more times and produced a ton of brilliancies along the way. His win over Aronian in the 2013 edition remains to be one of the greatest wins of modern times and who can forget his fabulous victory over Gelfand in 2006 which won him the tournament that year!

Until last year, Anand was tied with Carlsen for the record for the most number of tournament victories in Wijk aan Zee. Each of them had won the tournament five times. But Carlsen won again in 2018 and overtook Anand.

This year – the thirtieth since he first played at this prestigious round-robin – Anand came very close to settling scores with his world title successor. After the ninth round, he was even co-leading the event. In the end, he did not manage to win. His tenth round defeat against Carlsen cost him dearly. But he did finish with a respectable 7½/13, taking fifth place on the leaderboard (joint third by score). After his final round game, we caught up with the former five-time world champion for a brief chat about his journey.

Aditya Pai: Back in 1989, you had won your first title here in Wijk aan Zee. Thirty years down the line, you are still going strong. How does it feel?

Vishy Anand: Obviously, it’s nice. In the last thirty years, I have come here nineteen times. It’s one of those tournaments that I know the best. I have also played some other events very often. Amber is another one, and there is Frankfurt-Mainz. These are the tournaments that I have played the most and in such long streaks. It’s a special atmosphere. I mean, you kind of know the tournament. It’s a really old tradition; it’s a bit like coming home.

AP: Has the tournament changed since the time you were here first?

AP: Could you elaborate? How has the tournament evolved?

VA: I mean, back then we used to have the board boys and commentary in the pavilion – or even that came along later. Now, of course, there’s more electronics, engines have come along so the press centre has changed. So, some things have changed but in many ways, it’s the same hall, the same press centre... many things have remained the same.

AP: Can you share some memories from the times you’ve played here that stand out from the rest?

VA: Most of the funny ones would simply have something to do with the cold (laughs). Like one year, when I was still engaged to Aruna – we got married in June and I was here in January. So, I went to a phone booth and tried to call her. But at some point, I told her ‘it’s freezing; I can’t hold the phone anymore. I will speak to you later’. She had no idea what that was because she had never experienced winter. But, of course, she came to Wijk eventually and she found out. 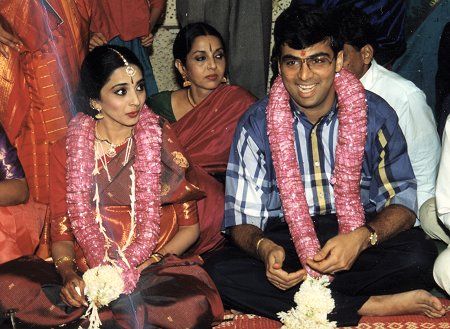 Anand tied the knot with Aruna on June 27, 1996 | Photo: Archives of Frederic Friedel

Besides that, I think, the first year I came here, I went to stay with a friend in Amsterdam – a chess journalist, actually, who had interviewed me in India – because I had no idea how to get here. These were pre-internet days, you know. So you couldn’t just look it up.

I remember, the next morning, I asked him how I could get to Wijk. He said he could take me to the train station and put me on a train and I got here.

AP: Let’s talk about your performance this year. What happened in your game against Magnus? At one point, it felt you would hold a draw without much problem. Did the long duration of the game play a part?

VA: I don’t know what went wrong but something went wrong. Let’s put it that way.

AP: You had very good chances of winning the tournament until the 10th round. Would you consider this a missed opportunity to catch up with Carlsen for the record for the most number of wins in Wijk?

VA: You can overanalyze a defeat but a defeat is simply that. I mean, it was a blow. 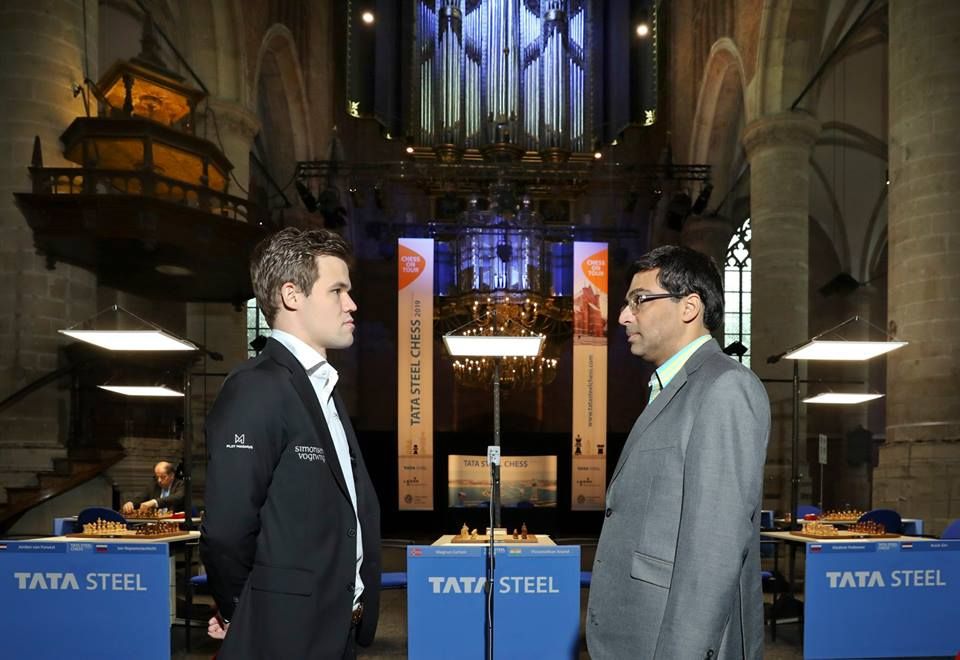 Until the 10th round, Anand had very good chances of winning the tournament | Photo: Alina L'ami

AP: In the final round, you played against Vidit Gujrathi, who has also done very well in the tournament. Can you share your thoughts on the game in particular and Vidit’s performance overall?

VA: Well, I was quite annoyed because I saw this idea of 19.d5 cxd5 and 20.Qg4 a bit too late. I think this is very unpleasant for Black. He was also terrified that I would play it, and then well, I think I kept a small edge. As for his play, yes, especially his wins against Mamedyarov and Kramnik, I think he will take that warmly.

AP: You’ve achieved almost everything there is to achieve in chess. What keeps you going?

AP: And is there something you are eyeing to achieve still?

VA: I am just trying to get good results (smiles).

Other stories on Tata Steel