As per Wikipedia, Anish Giri is a Russian born Dutch Grandmaster. But by his name, he sounds curiously Indian. Also, he holds a connection to India keeping in mind his work with Vidit Gujrathi in recent times and he had also been a second to Viswanathan Anand during his World Championship match against Veselin Topalov in Sofia, Bulgaria. After the Tata Steel came to a close, Anish, in a brief interview with Aditya Pai, spoke about his Indian roots, his work with Anand and Vidit, the current boom in Indian chess and his prospects of playing in India.

**This interview was originally published on Firstpost

Anish Kumar Giri – Indian ears might automatically consider the bearer of this name to hail from their home country. But this top chess star, ranked fifth in the world currently, was born in St. Petersburg and lives in the Netherlands. But even besides his name, there are some things that connect him to India. Vidit Gujrathi, one of India’s top talents, has been the Dutchman’s second for quite a while now. Anish has also himself been a second to the Indian chess legend, Viswanathan Anand, during Anand’s World Championship match against Veselin Topalov in 2006.

Firstpost was able to catch up with Anish in the press room of the De Moriaan Community Centre in Wijk aan Zee after the Tata Steel Masters. In the interview, Anish talks about his connection to India, his work with Vidit and Anand, the current boom in Indian chess and his prospects of playing in the country.

AP: You were born in St. Petersburg, you play for the Netherlands. Why do you have an Indian name?

AG: My father is from Nepal and his mother, in turn, is Indian. That’s where my first and last name come from. I think my parents thought that since my last name was already Giri, it would be odd to give me some Russian name like, let’s say, Mikhail (laughs).

AP: Another thing that links you to India is you working with Vidit Gujrathi. What inspired you to choose him as one of your seconds.

AG: I wouldn’t generally stereotype people by their country, but in this case, I think it’s a positive so it’s fine. I think Indian players are hardworking and I find that an important quality. Especially when I want to work with someone, I would want that person to be able to work hard and with enthusiasm. I have worked with various players from different countries and Vidit is indeed one of them. 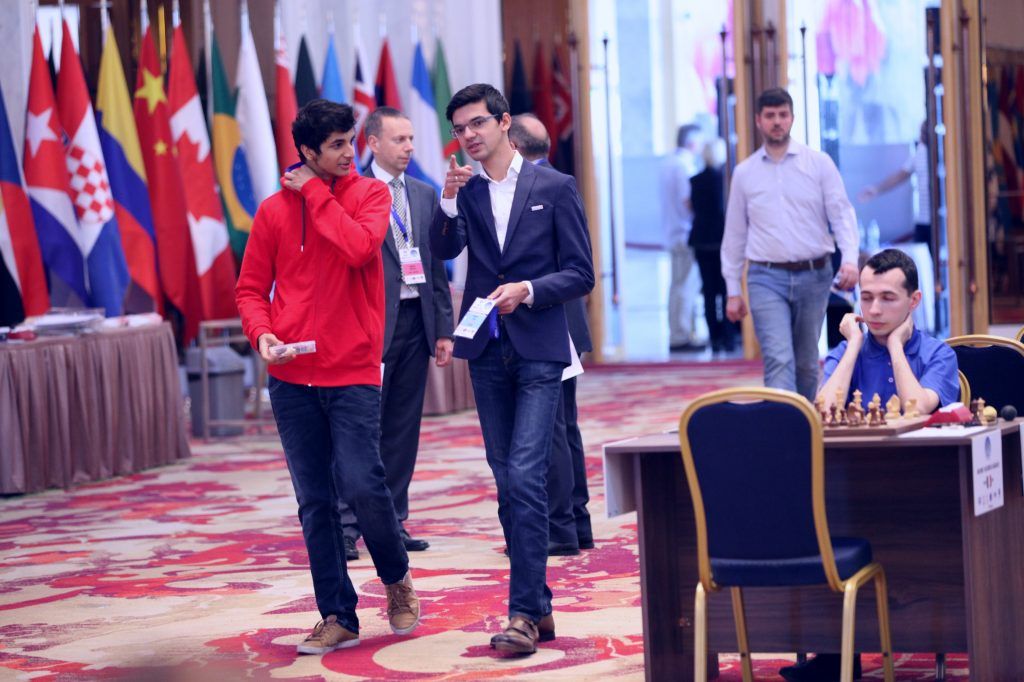 Vidit and Anish during the 2017 World Cup in Tbilisi Georgia | Photo: Anastasia Karlovich

AP: So, can you tell about your experience working with him?

AG: Well, he is a good player and I can, sort of, understand the way he thinks. A lot of his ideas appeal to me as well. I think we did a lot of good things, found some important ideas and I am also glad that it worked out for him. I mean due to or despite working with me, he still managed to become a good player and improved a lot (laughs). When we started working, he was rated about 2650. He had been there already for a while and seemed not to be making much progress but after that he managed to take off and now he has entered the 2700 club.

AP: Why did your association with him come to an end?

AG: It hasn’t come to an end. Just yesterday, we exchanged some thoughts.

AP: Some years ago, you had also helped Anand in his match against Topalov. Could you tell more about that?

AG: Yes, that was a very, very long time ago. I’m very fortunate that Vishy invited me. I was very young at the time. I thought there was very little I could bring in. Perhaps, also, it is refreshing when you have a young player coming in. But I remember when we were playing the games or comparing notes, there wasn’t a single time when my analysis was better. I was just shocked by the depth of his preparation and the speed of his play.

I remember I had written down two games that I had won. We had played more than thirty games or so. But I won only two and I wrote them down (laughs). 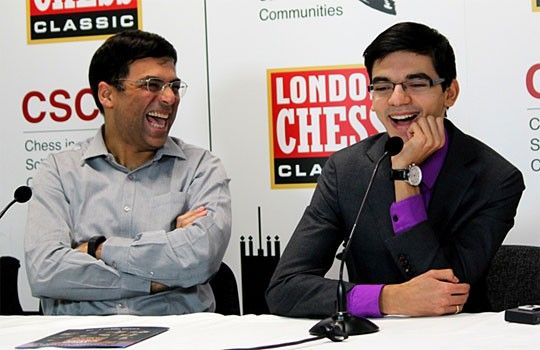 Anand and Anish's camaraderie dates back to 2010 when Anish helped Vishy in his World Championship Match against Topalov | Photo: Amruta Mokal

AP: What did you learn from the experience? Was there any specific learning?

AG: Well obviously, I learnt a lot. It was very inspiring to get to know Vishy and also to see the depth of preparation done for world championship matches. I mean, by now, I already know more or less what it is about but back then, I was actually shocked. I thought that I was also working but when I saw Vishy’s preparation, I realized that what I was doing was just child’s play.

AP: India is speculated to become a chess super-power in the not so distant future. Could you tell what your opinion is on this?

AG: Yes, it’s great. Some of the Indian players are my friends. I am very happy for them. You see that there is a boom, largely thanks to Vishy Anand who has been there for a while. But also, I guess, because there is some proper support for the players. For example, most of my friends are supported by some companies and the government as well. And then, the players are given awards, they are motivated. Parents also see that there is a future in chess, so they let their kids take some time off school sometimes. It’s very important to accommodate talent and India does that very well.

And then, players are naturally hardworking as well. Also, most of the kids I know are very modest. They do not get swayed by success. They keep working hard, maintaining their motivation and humility. That’s very good to see.

AP: What will you say about the role ChessBase India has played and can play in the future in terms of promoting the game?

AG: Well, I cannot judge that. I know Sagar, personally, very well. He’s a very nice man, extremely hardworking as well. He puts in more hours than anyone I have seen. I do see the rising players but I don’t know what ChessBase India’s input in this has been.

But obviously, it is doing a good job. I recently saw an article that they also want to support players with arranging accommodation, travel and visas. That sounds very convenient. I am very happy and, I think, it’s largely due to Sagar’s enthusiasm. And it’s great to see that there is fertile soil in India and he is planting the seeds.

AP: Have you ever played in India?

AG: Actually, I haven’t. There were never any opportunities. Only last year, there was a rapid tournament (Tata Steel India) but, unfortunately, I was playing in China in the same period. Perhaps, next year, I might be a part of the Grand Chess Tour and play there.

It’s good to see that there are good tournaments in India. It all comes together – the players and the tournaments. It’s great to see the development.

AP: But have you had a chance to lose to some talented Indians in other countries?

AG: Strangely enough, I can’t recall games that I lost to Indian players. I have seen a lot of Indian kids, for example, in the Isle of Man tournament. I have also seen them play in some small Dutch tournaments. I’ve seen Praggnanandhaa, Nihal Sarin, Gukesh and all of these guys. And before, I have met guys like Lalith Babu – I remember having played him – Adhiban, etc. I have seen many of them. I haven’t played many of them but I have seen their games and I am following their careers.

AP: Are you looking forward to losing to any one of them? (laughs)

AG: No, I am not. But actually, my wife lost quite a lot of games at some point when she played in India, at the Chennai Open, during the 2013 World Championship (laughs). She lost a lot of games to Indian kids. I hope I have outgrown that already. I hope they still need to grow up before they beat me.

AP: Will we see you play in India anytime in the near future?

AG: Yeah, as I said, there is a good chance of that happening next year because I might be a part of the Grand Chess Tour. It depends on how the tournaments are located and if I take part. But, hopefully, I feel I am going to play one day. And I hope more tournaments are organized as well – perhaps, a classical tournament.

AP: Playing chess aside, have you been to India, perhaps, just as a tourist?

AG: I have been to Nepal, obviously, because my father is from Nepal. The culture is similar, in my opinion. I haven’t actually been to India. I have come very close, though. My father’s town, Biratnagar is very near to India. I remember we had taken a bus and already after a few kilometres, we were already at the border.

Other stories on Tata Steel