Vishy Anand and Magnus Carlsen were found in pleasantly candid mood on the last day of Tata Steel Chess India 2019. The event ended with an excellent final press conference where both players gave some really generous and compelling answers to the questions they were asked. We published a video of the same on our channel earlier but sadly, owing to unfortunate noise disturbances, many of the interesting responses were hard to understand in it. In this article we therefore try to mitigate this problem by bringing you the transcript along with the video. Hopefully, you will be able to appreciate the revealing press conference with the two chess greats better after going through this write-up. 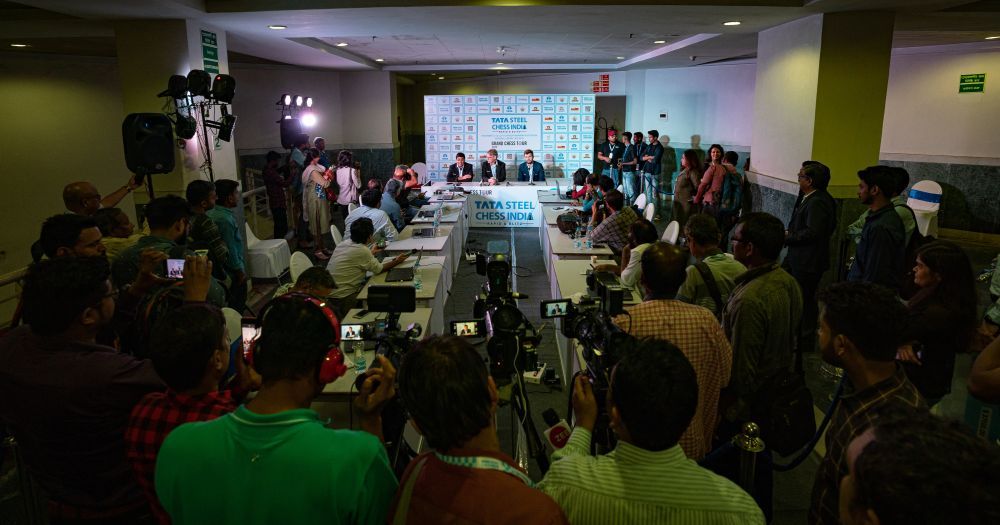 The conference hall was jam-packed on the final day of the event. Everyone wanted to ask questions to either Vishy or Magnus. Noise was naturally the unpleasant by-product! | Photo: Lennart Ootes

Question to Vishy: How do you deal with disappointment overall? How to you come back and play your last games after being distraught with a shattering loss?

Vishy: (Laughs) I am okay with failure but it is hope that is killing me. I will keep giving myself chance but then I will destroy them myself. I mean this is almost a new low in a sense that this whole year this has been my theme. I would have a half decent tournament then I would spoil it myself. This year, almost the whole year, I have been struggling to show any kind of consistency or stability. The good news is my son got second prize in dance competition in school. That's the most important thing for me right now.

Question: I recall, I think it was 2013 when you left Hyatt you went straight to your son's school where he was participating in a fancy dress competition. Is it Akhil who gives you something to look forward to?

Vishy: Well, of course. I mean it is a joy to be a father. The thing is I was at home when he was working very hard for this competition. He took it very seriously. He would put on the sound track and keep practicing all the steps. I am happy that he got the second prize. You see that it pays off!

Question to Magnus: Magnus, you have a new record now in GCT. Do these numbers make a difference to you. Setting records, raising the bar?

Magnus: I guess so. It tells me something about the level of my performance. But most of all here I am very happy with my performance in general.

Question to Magnus: You didn't look so well at the start of the tournament today. You took some short draws in the first few rounds and then returned to win. What exactly was happening through the day today?

Magnus: So what happened is, I offered a draw, especially in the first game, because I desperately needed to go to the washroom. That was it and that was basically the case with most of the other draw offers. I just couldn't stay at the board and was feeling really unwell. Later though I started feeling better. Obviously with all that in mind I am pretty happy with my performance today.

Question to Vishy: Chess in India has not been made compulsory in schools yet. What do you think about it?

Vishy: I am not even completely sure that it should be. As long as it gets into schools I don't see why it should be a subject or should be compulsory. I am happy as long as it is there and I am sure that enough students will take the chance.

Vishy leaves the press conference after taking the above questions but Magnus stays for a few more minutes, answering more questions.

Question: Over the years you know, every tournament that you go and take part in, there's so much attention, media focus. You probably can't step out of the room all the time. How do you deal with all the pressure and yet perform at that level?

Magnus: I try to get away a bit just not to use up unnecessary amount of energy. One of my favourite quotes is: "the second worst thing is a lot of attention and the worst thing is no attention". So I am very happy with all the attention that chess is getting. For me personally, when I feel like I have the energy I am very happy to give as well. But unfortunately, that also means that when you don't have the energy to give your time, you cannot really get away. I mean it is both a blessing and a curse clearly. I try to do whatever feels is right if I have the energy, if I feel that I can afford I will give as much of my time as I can. But in the end creating the best conditions for performing well is always the most important thing for me.

Question: Hi Magnus, as you know there are many young Grandmasters in India today, many of them are below the age of fifteen. What do you feel about the budding chess talents of our country? Do you have any advice for them?

Magnus: For the grown ups my advice would just be to not push the kids too much and let them go about it at their own pace. I would say the future is very very bright for Indian chess. There are so many good young players popping up from everywhere. They really seem to love the game and that's the crucial part - the love of the game. As long as you have that as a kid you can do almost anything. And as adults the most important thing we can do is to ensure that the kid doesn't lose the love of the game. That really is the most important thing.

Question: Hello Magnus, talking about the GCT structure, it consists of five rapid and blitz events and only two classical events. Would you like to have more classical events in it? And do you see GCT becoming a part of the World Championship cycle?

Magnus: To be honest, I haven't thought much about it. I generally find these rapid and blitz tournaments to be immensely enjoyable. But that is also because I am doing well. That's the thing, so once things start to go off the rails then it is very different. But yeah, right now I love the format. In terms of Grand Chess Tour becoming a part of the World Championship cycle, I haven't really thought about it. I don't know if I have the right sort of incentives to answer that question right now.

Question: As a World Champion already for many years what do you feel is your responsibilities towards the Chess community? What is your vision as a World Champion, apart from playing chess that is?

Magnus: I think my philosophy is closer to Fischer in that regard. I would say five or six years ago I was very focussed to bring the message of chess to the world and I would say I still am to some extent. But I guess after not playing that well for a few years I realized that I just needed to sort of use all my energy in playing chess. Promoting the game is still something I think about but it is always secondary to being in best conditions for performing better.

Magnus graciously agrees to answer one more question before leaving. He obviously seems to be in a very good mood.

Question: You had more and more fortified pawn structures in this tournament. Do you think so?

Magnus: Yes, I think you may be right. In this tournament I had a lot of closed pawn structures. But I feel in recent tournaments I have had a lot of very open games as well. So I wouldn't say I necessarily have preference for one or the other. I guess, as you say, in this tournament I reverted back to the style of playing a little safer. But I am not sure if that thing will continue.

It was such a revealing and excellent final press conference with Anand and Carlsen at the Tata Steel Chess India Rapid and Blitz 2019. We apologize for the noise disturbances in the video, but we hope that with the help of the transcript above, you will find the questions and answers to be very useful and revealing.
Related news: