Historical moment: Super tournament to be held in India for the first time ever!

It's a historical moment for Indian chess. For the first time we will be hosting a super tournament in India - the Tata Steel Chess India 2018. It will be held in Kolkata from the 9th to the 14th of November 2018. India's best players Anand, Harikrishna, Vidit and Ganguly will fight it out against world stars like Aronian, Karjakin, Nakamura, Mamedyarov and Wesley So. We also have two of our best young talents playing in this tournament Praggnanandhaa and Nihal Sarin. India has had a five-time World Champion, we have 55 grandmasters, we have over 70,000 players registered with FIDE, the big thing that was missing until now was a super tournament of this stature! This will be an excellent exposure for all our young talents to play against these world stars.

It's been something that all of us - the Indian chess fans have been waiting for. The first super tournament on Indian soil will take place from the 9th to the 14th of November 2018 in Kolkata, India. The format of play will be rapid and blitz. The tournament is being sponsored by Tata Steel and organized by Game Plan, the company that manages Kolkata Knight Riders. The event will have five world stars - Aronian, Mamedyarov, Nakamura, So and Karjakin who will take on four Indian stars - Vishy Anand, Harikrishna, Vidit and Ganguly. We also have Praggnanandhaa and Nihal to add freshness to the event. Either of these youngsters will play in one of the sections rapid or blitz. So if Pragg plays in blitz, Nihal will play in Rapid and vice versa.

Slowly and steadily they revealed all the players. 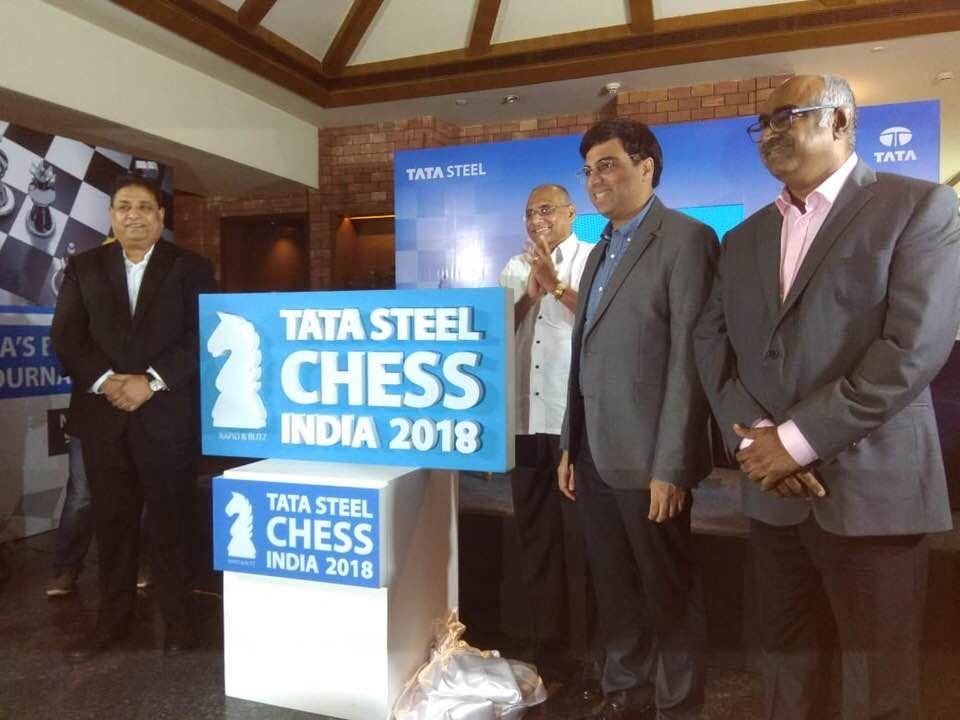 A press conference was arranged in Kolkata to launch the tournament today (15th of September) and Vishy Anand attended it | Photo: Bharat Singh's Facebook page. 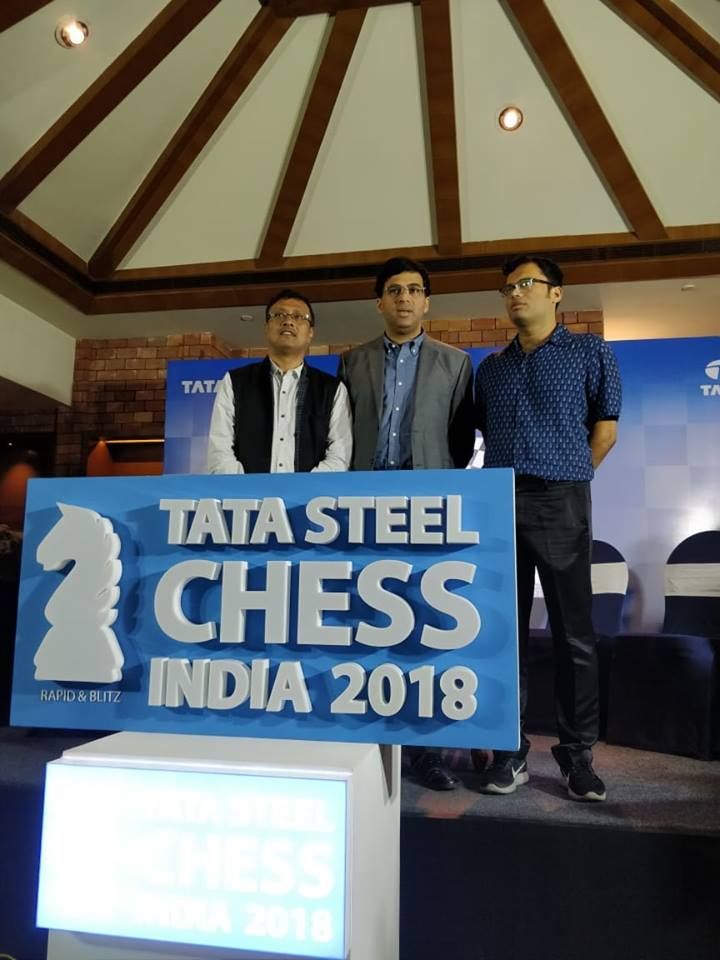 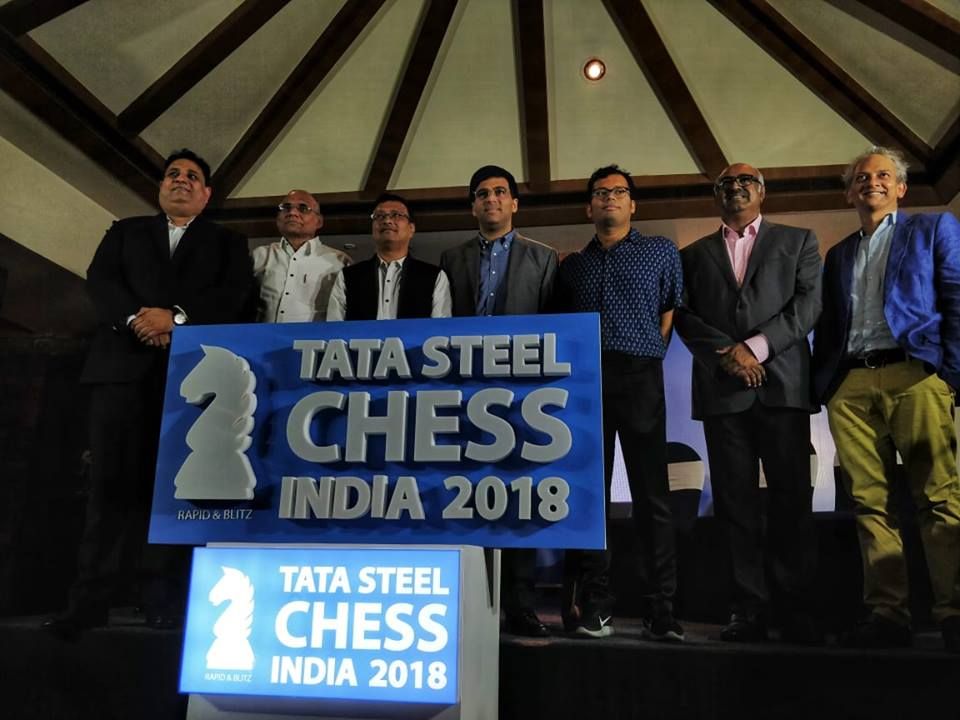 Comments from the players:

Viswanathan Anand: I am very excited that the Tata Steel Chess India 2018 tournament will be held in Kolkata in November. I believe most of my colleagues who are going to join me at this tournament are also looking forward to it. Levon and Sergey Karjakin both asked me many times about the event. The field is genuinely strong. We have a nice mix of both top players and my compatriots. I think it will be a real treat to play inn this tournament. I will also be happy to play in front of my local audience. I am really excited about the tournament. I hope this will in fact mature into a tradition in India, this Tata Steel Chess Tournament. It's nice that finally the connection between Wijk Aan Zee and India is developing well.

Vidit Gujrathi: It's great that Tata Steel Chess India 2018 is taking place in India. I always wanted to play against strong opposition and this gives me the perfect opportunity. This tournament will have a big impact on the chess scene in India. We badly needed to start having super tournaments and that will encourage younger players to take up the sport. I see this as a new beginning in the tournament scenario in India. Hopefully there will be many more events in the future. From my side I am preparing hard for the tournament and waiting for it to begin. Thanks once again to all the officials and Tata Steel for bringing this to our country.

Surya Sekhar Ganguly: First of all I would like to thank Game Plan for coming up with this idea of organising a super tournament. Tata Steel Chess India 2018 will bring a whole lot of opportunities for Indian players. In recent years we had many open GM tournaments but closed super tournaments were missing for long time. For the first time we will be having such an event and that too in Kolkata. Obviously I am thrilled and looking forward to this tournament which apparently is going to become an annual event. I hope this tournament will set a benchmark and in future we will see many more super tournaments taking place in India. As it turns out I have played with many top players but never played against Anand. We did play many training games over the year but didn't play a single tournament game yet.

It’s a wow moment for Indian chess. Great tournament like this never happened before. We are going to Olympiad with the best team. Chess is growing fast in India. Thanks for your efforts.

This page will be updated as we have more information about the event and comments from the players.