The opening ceremony of the first super tournament on Indian soil

And we are off! The opening ceremony of the first super tournament on Indian soil was held in the evening of 8th of November 2018. For chess fans across the country this was a big moment. At one place we had the absolute best chess players of the world which included our very own Vishy Anand, the man in form Shakhriyar Mamedyarov, Sergey Karjakin, Levon Aronian, Hikaru Nakamura and Wesley So. This will be a great exposure for players like Harikrishna, Vidit Gujrathi, Surya Sekhar Ganguly, Nihal Sarin (rapid) and Praggnanandhaa (blitz). The short time control of 25'+10'' in rapid and 5'+3'' in blitz makes this an event to look forward to. It starts on the same day as the World Championship between Carlsen and Caruana. ChessBase India brings you pictures from the opening ceremony by Amruta Mokal and video interviews by Sagar Shah and Shahid Ahmed.

The speed at which Indian chess has been progressing in the last few years has made the world take attention to all our players. It's now time to step it up a notch further. The first super-tournament, the much looked forward to, Tata Steel Chess India 2018 is here! While India had witnessed many individual great players visiting the country like Viktor Korchnoi, Vasily Smyslov and others, this is the first time that you have so many world class players playing under one roof at the same time.

The International stars include Shakhriyar Mamedyarov, Hikaru Nakamura, Sergey Karjakin, Levon Aronian and Wesley So, while the Indian players are Vishy Anand, Pentala Harikrishna, Vidit Gujrathi, Surya Sekhar Ganguly, Nihal Sarin and Praggnanandhaa. If you look carefully at this list you will realize that there are five international stars while there are six players from India. That is because the two little youngsters of Indian chess Nihal Sarin and Praggnanandhaa will play the Rapid and Blitz sections respectively! It's a fantastic move by the organizers to give a chance to these youngsters to fight it out against the best in the business. 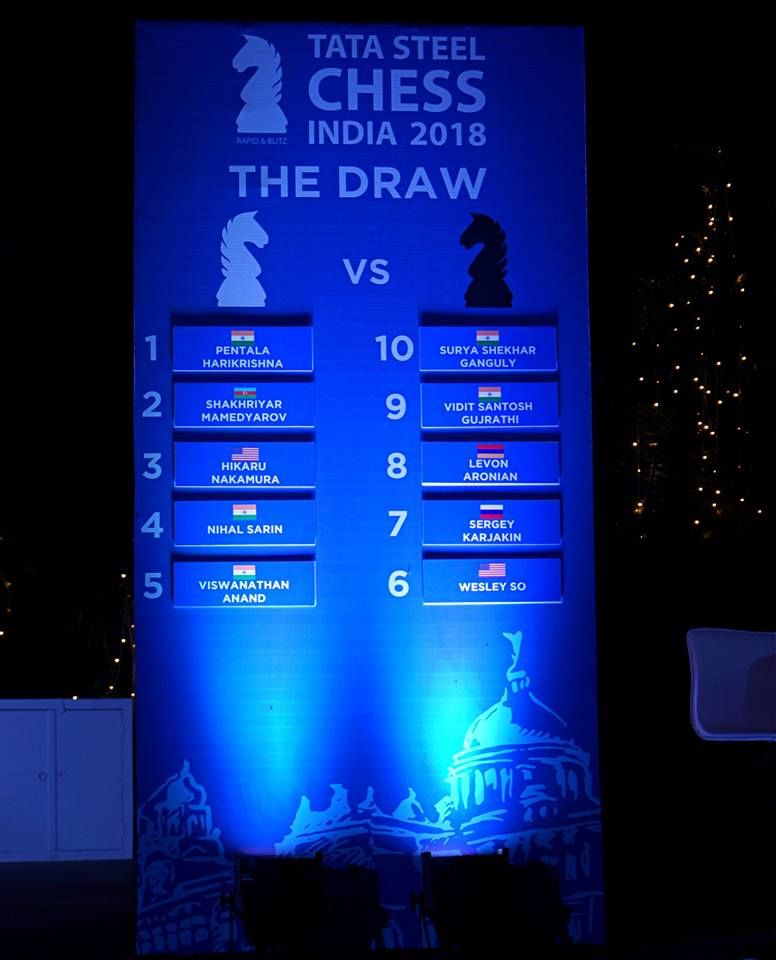 That's how the pairings look for round one of the Rapid which will begin on 9th of November 2018 at 2 p.m. IST 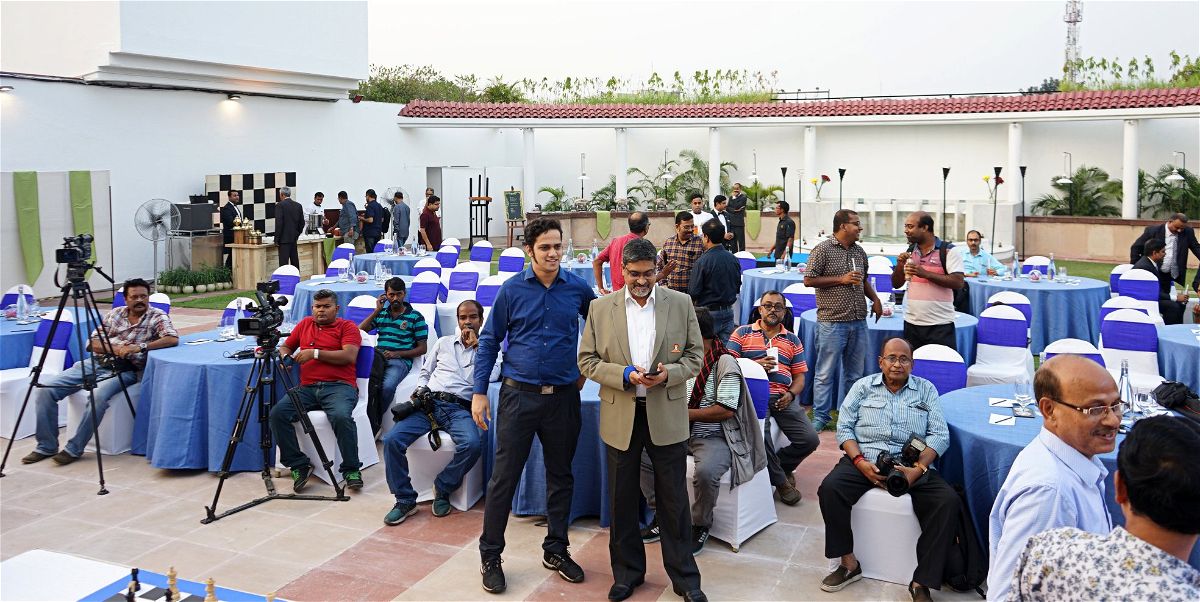 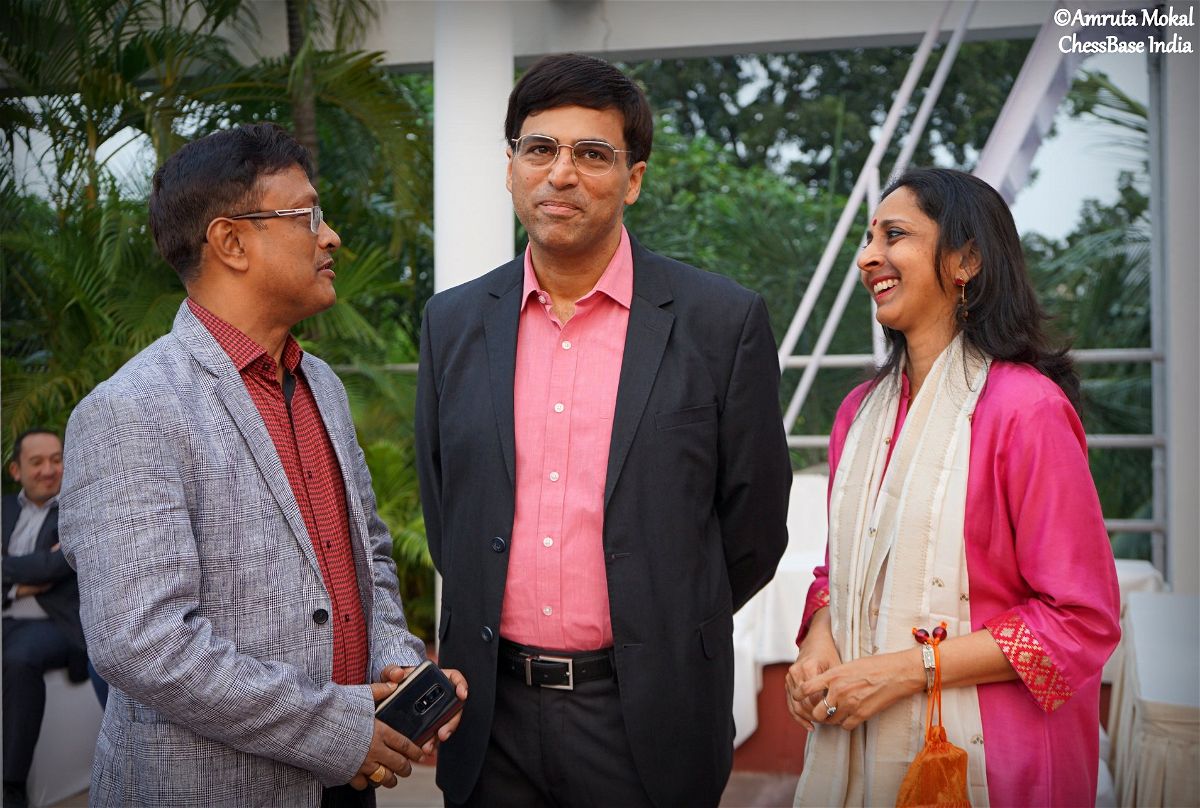 Vishy Anand enters the venue and is greeted by Dibyendu Barua. It's wonderful to see Aruna joining Vishy in a tournament after a long time! 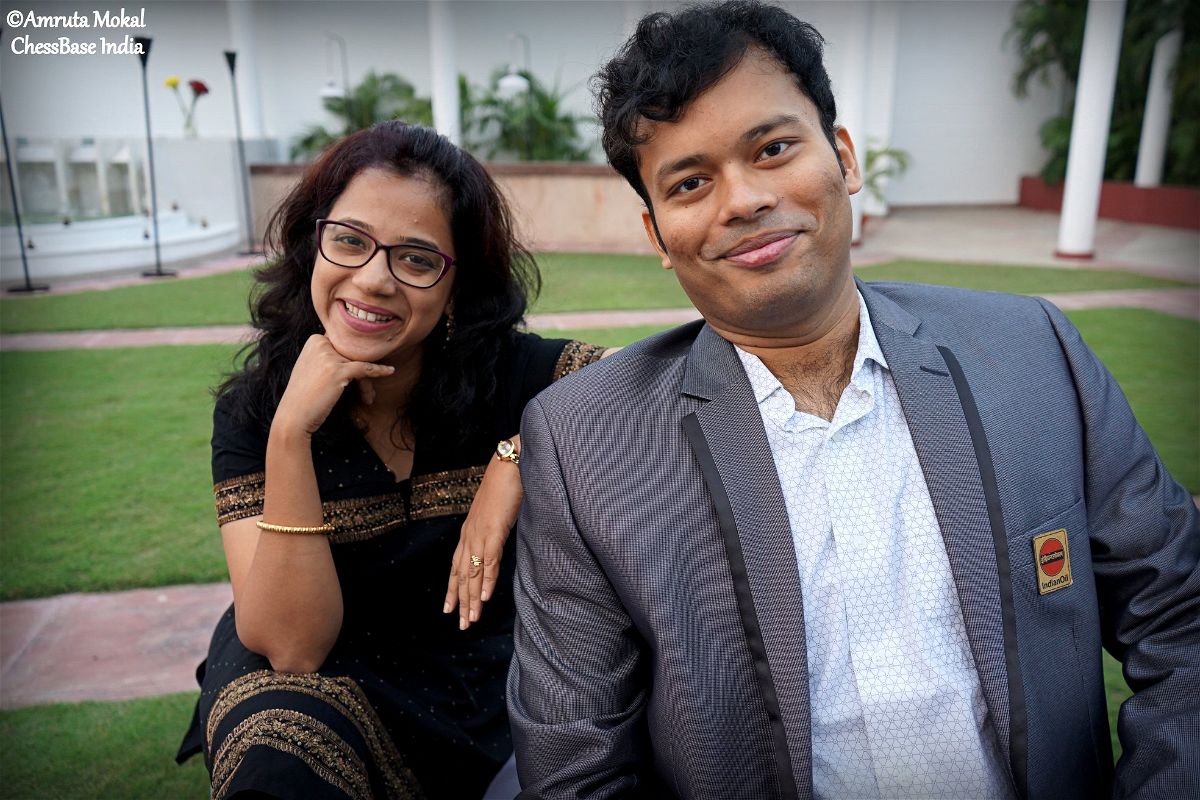 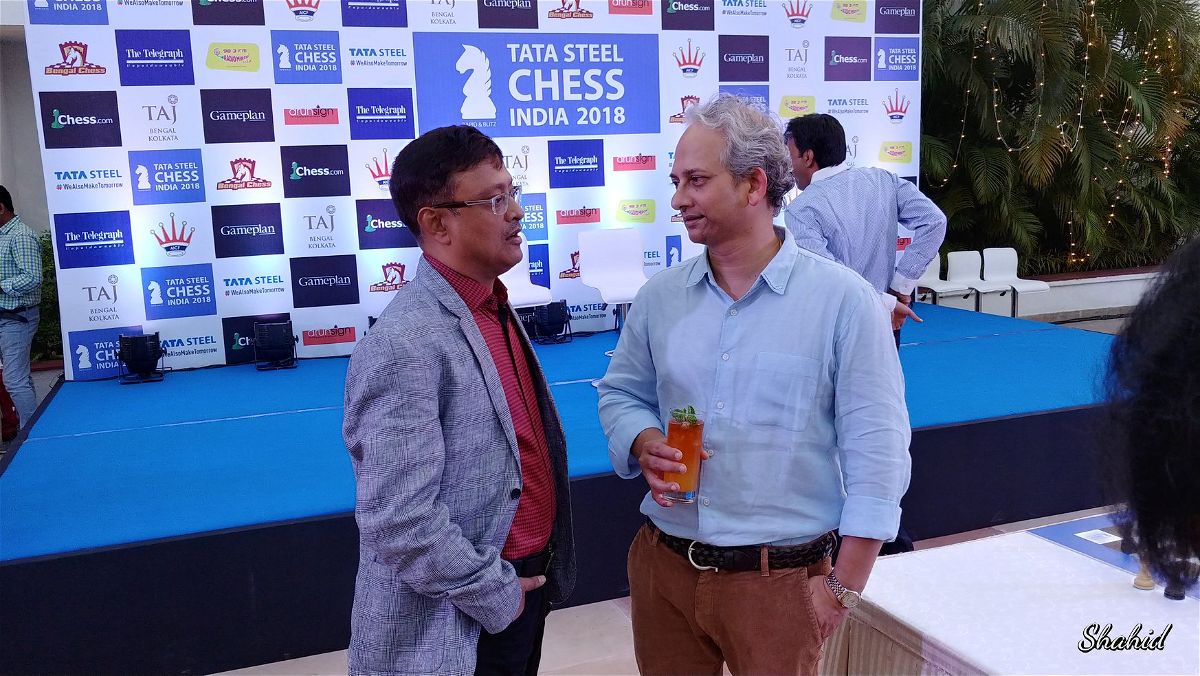 Dibyendu Barua and talks to Jeet Banerjee, the director of Game Plan, the company that is organizing this event! 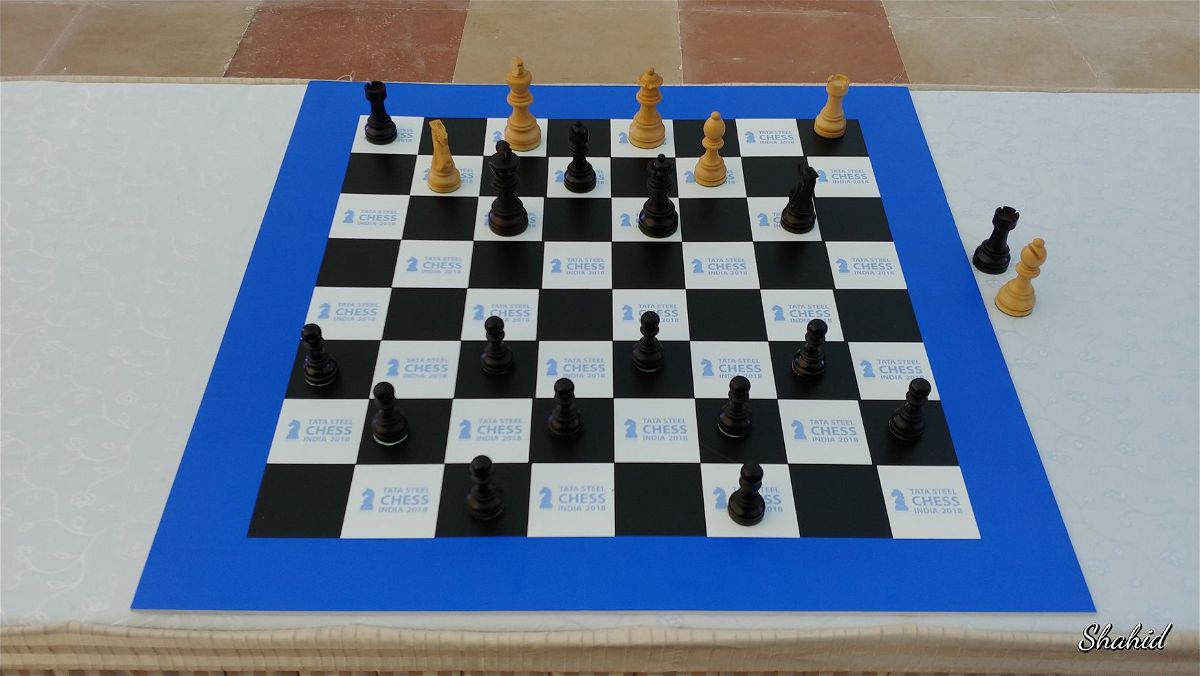 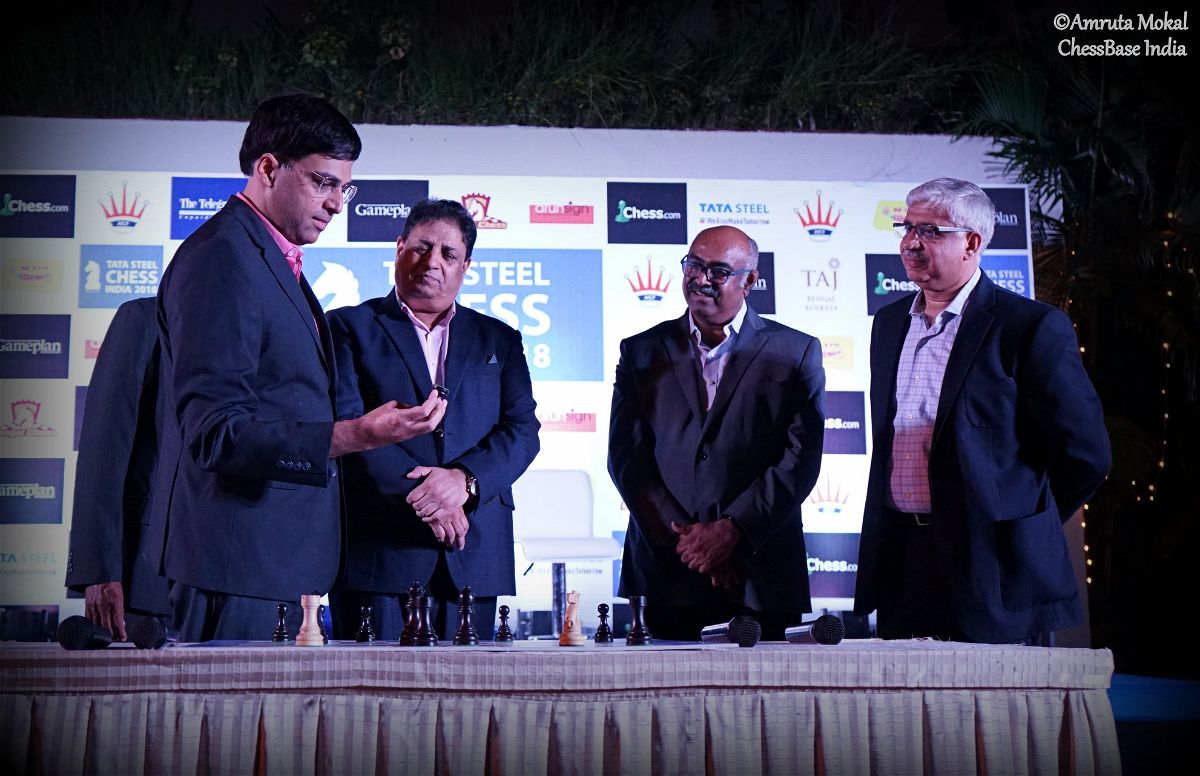 Check pairings for all the rounds 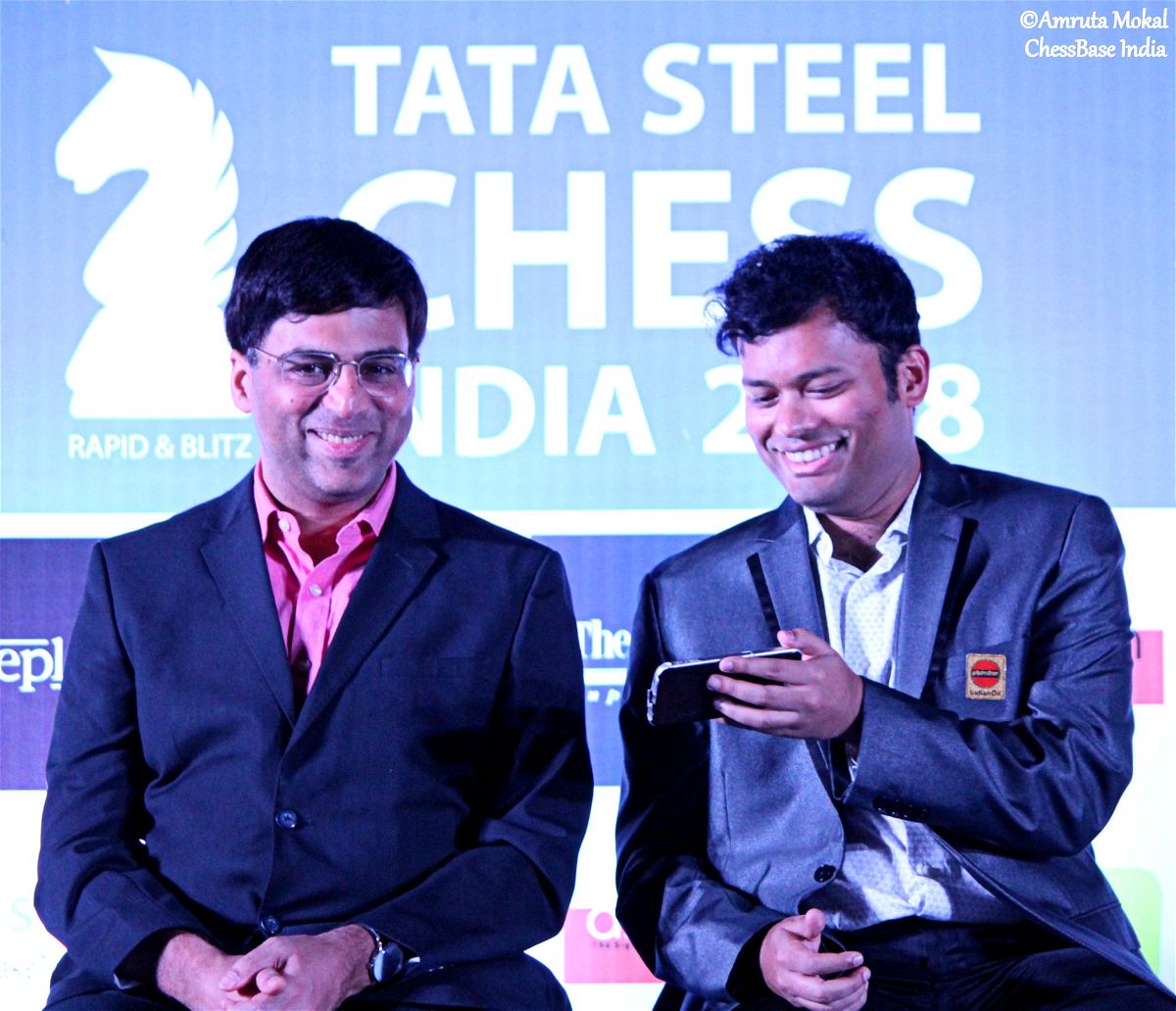 What do you think Surya is showing Vishy? This is the first time that Ganguly and Anand will be pitted against each other in a tournament game! 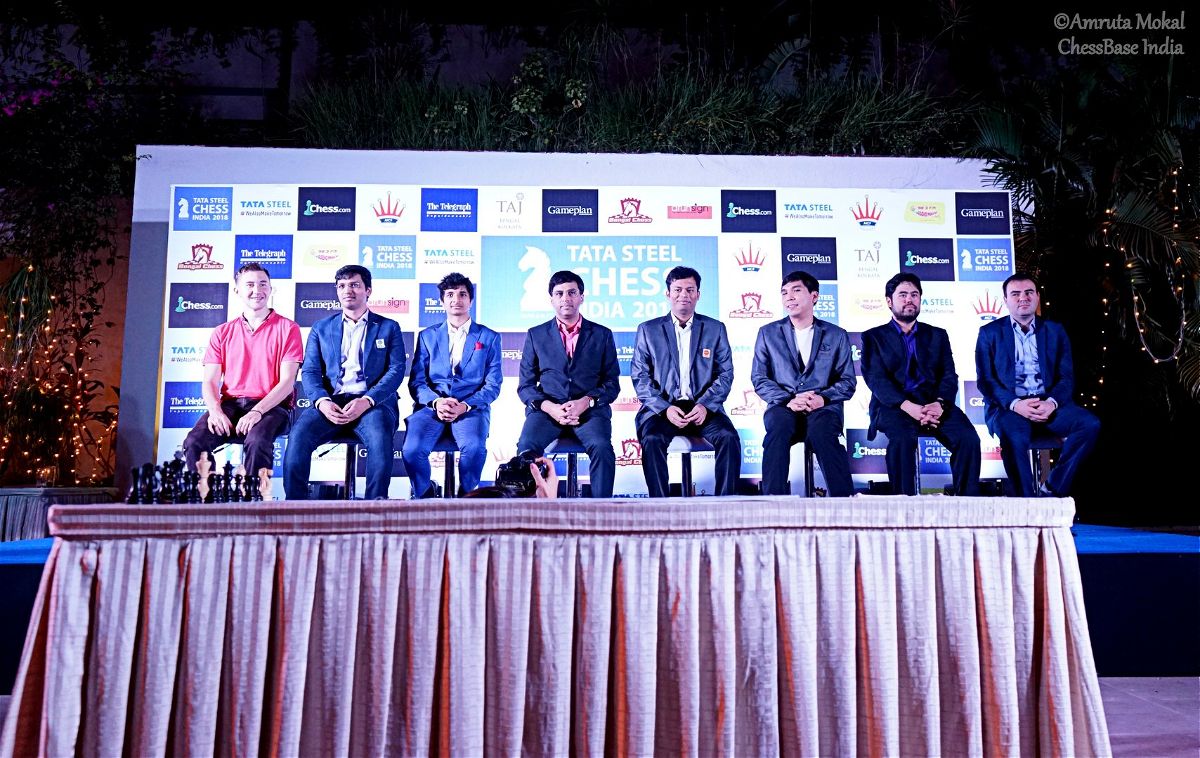 Eight out of ten players were present at the opening ceremony. Aronian's flight got delayed from Jaipur and Nihal reached a few minutes later

That's the happiness of two friends meeting each other! Rakesh Rao, an eminent journalist with GM Dibyendu Barua 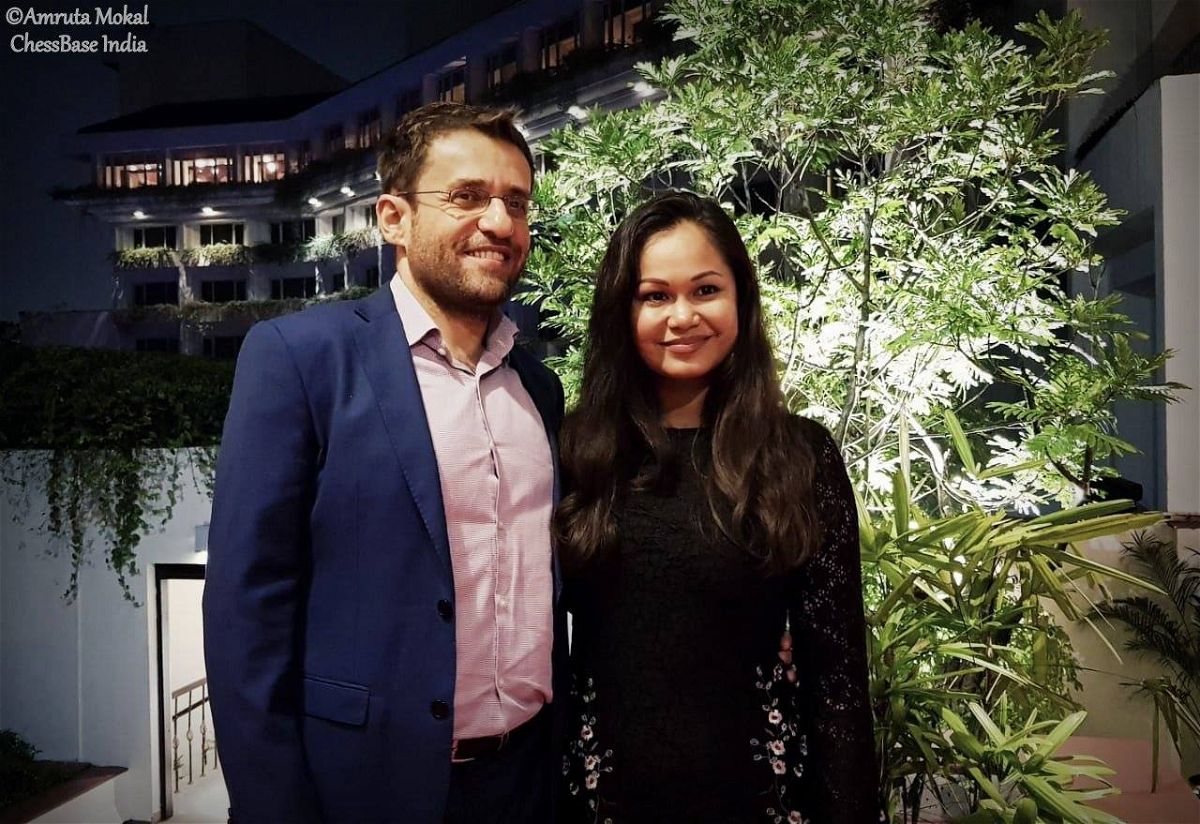 Levon Aronian and Arianne Caoili made a late entry. They were having a mini-vacation in Jaipur and their flight was delayed. 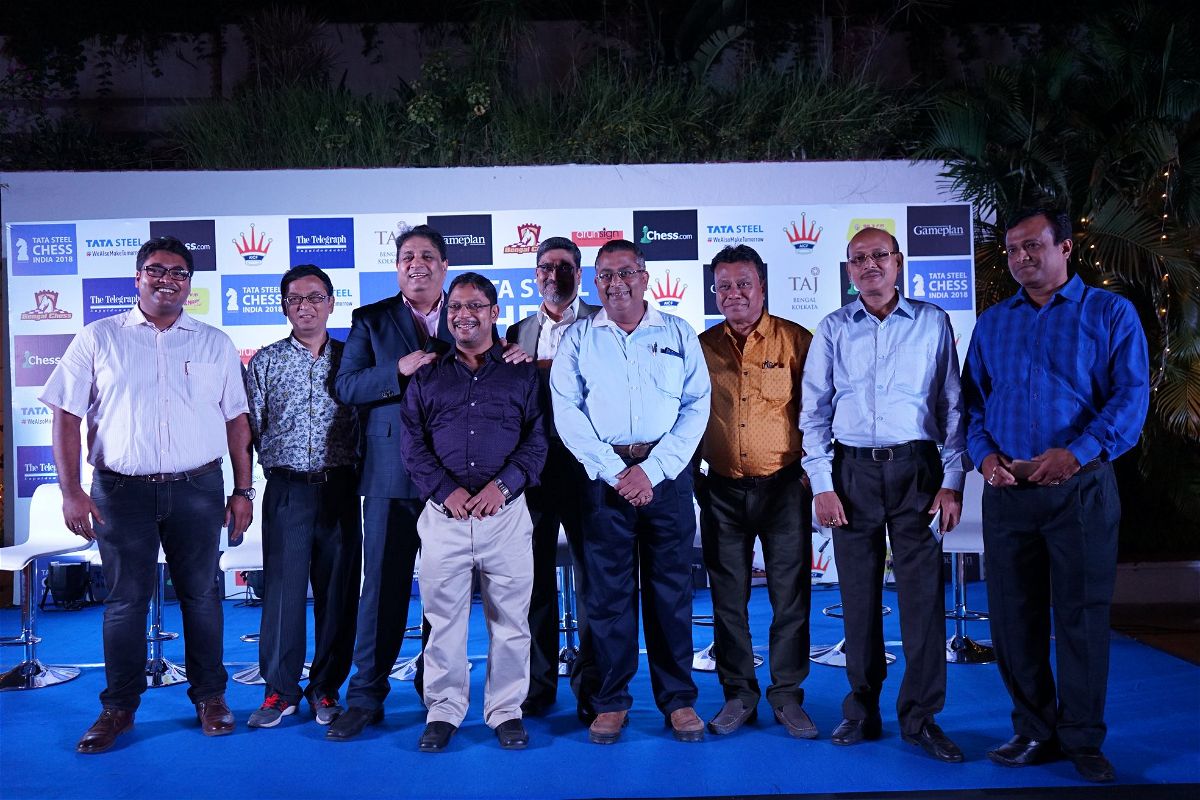 A big moment for West Bengal Chess Association who have been looking forward to this day with great excitement! 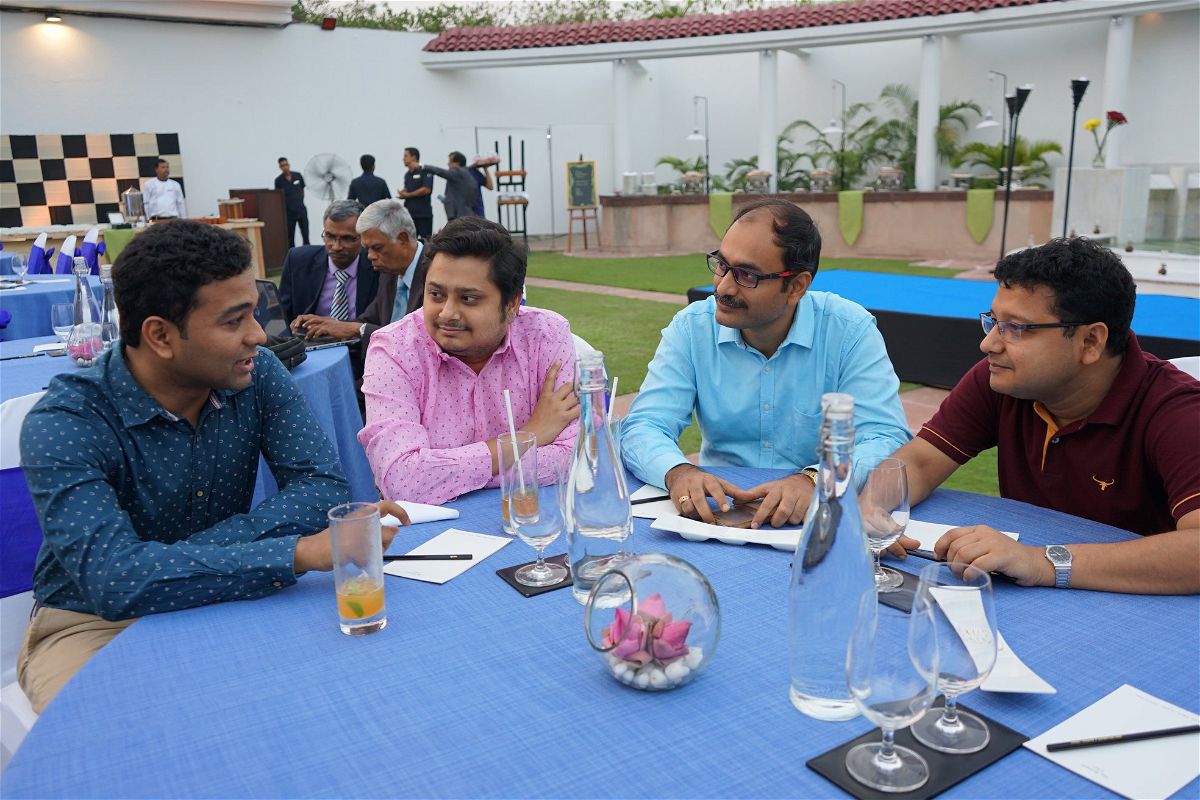 The best players from the city were present at the opening ceremony! 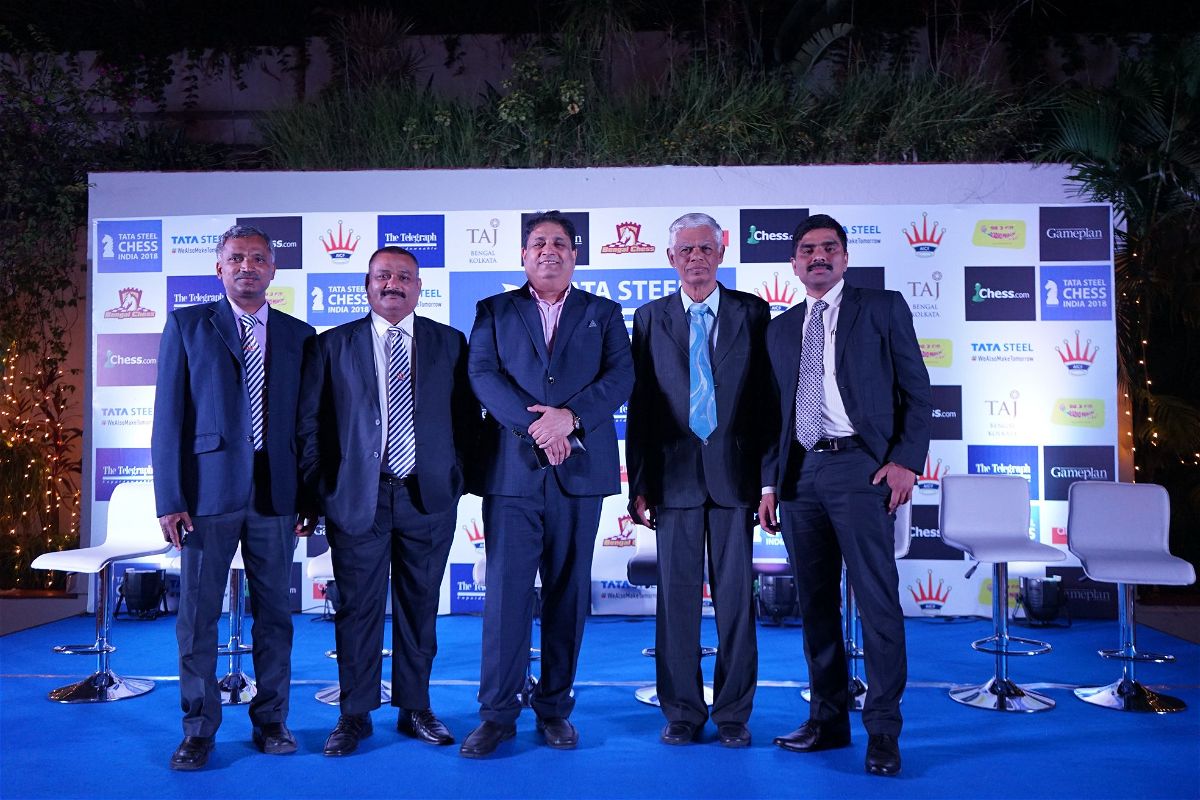 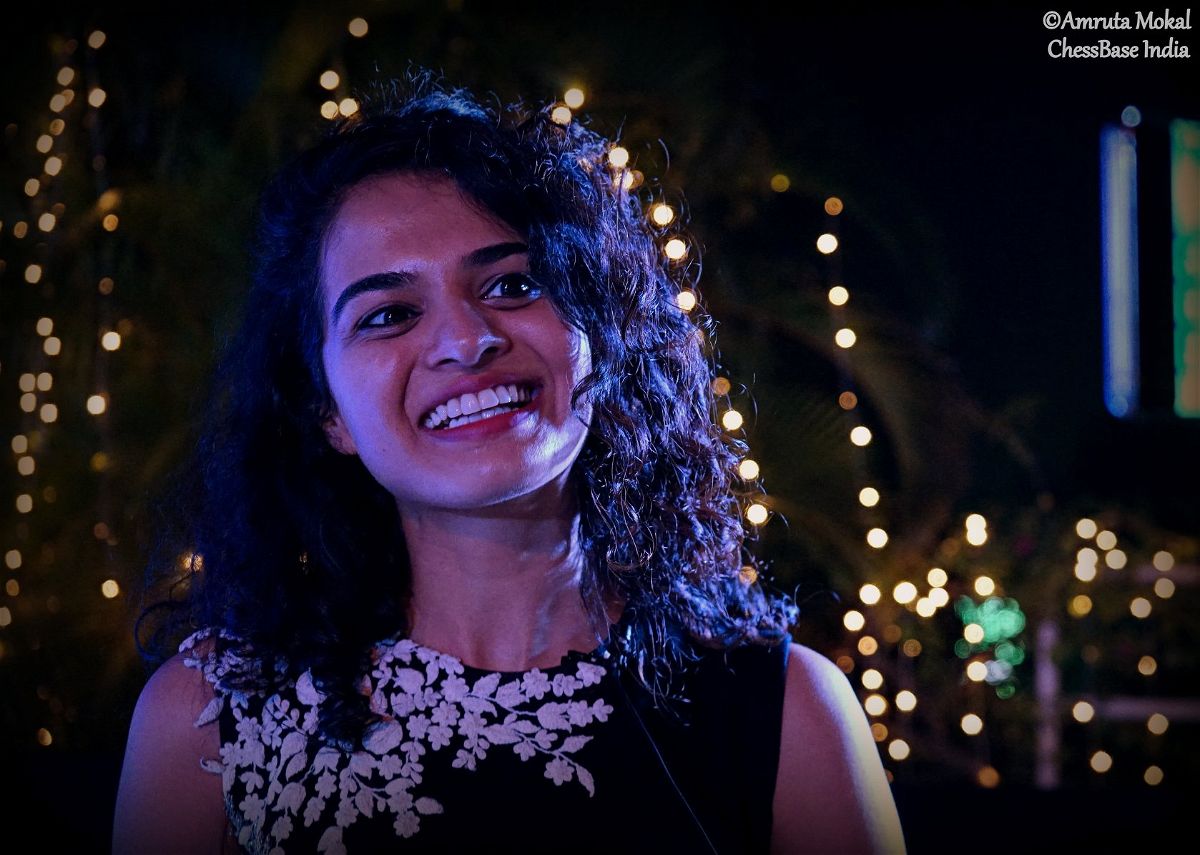 The Live Commentary will begin on 9th of November 2018 at 2 p.m. IST and you can follow it live here.

Tata Steel is going to support this rapid and blitz tournament in India for a total of five editions! This is fantastic news for all the Indian chess fans.

The ChessBase India quiz on India!

ChessBase India had prepared an interesting quiz for all the International players to test their general knowledge about India. 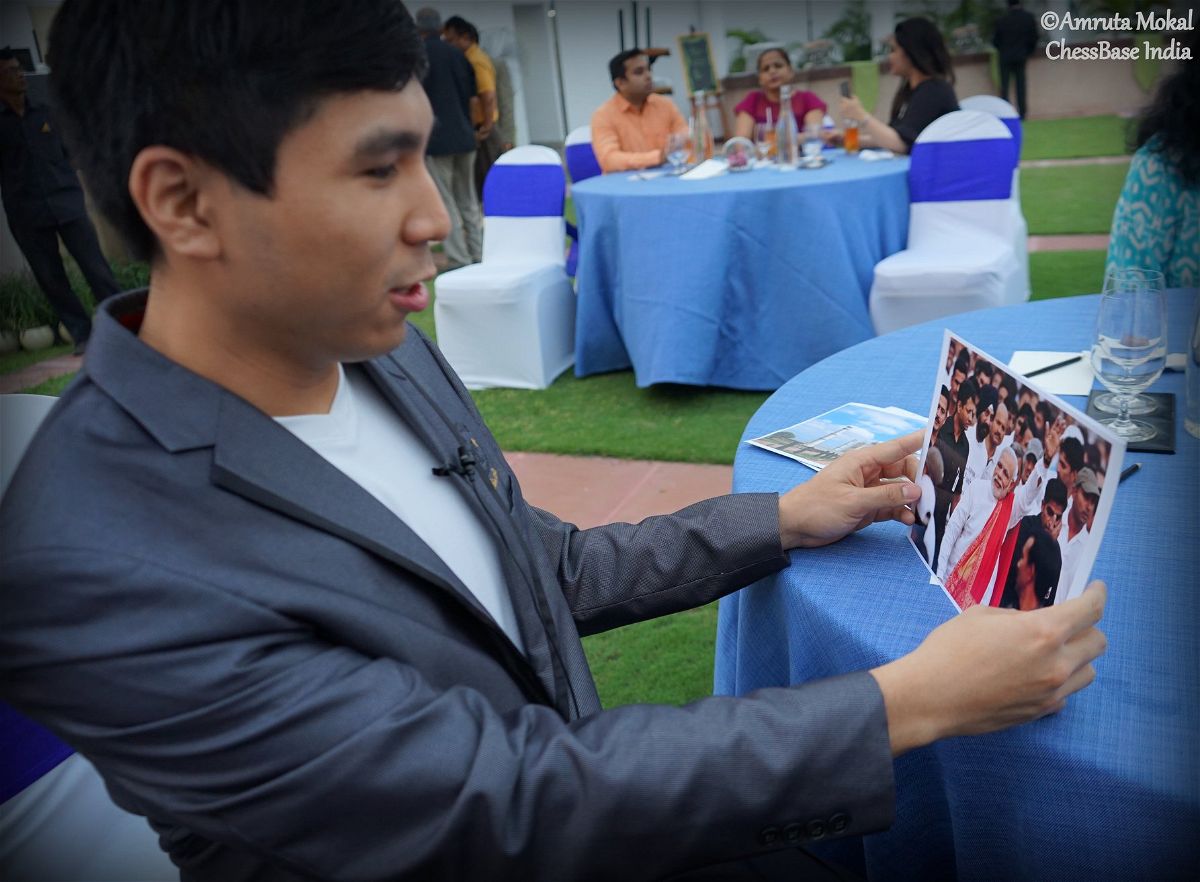 Wesley So trying his hand at the quiz!

Aruna also gave it a go! 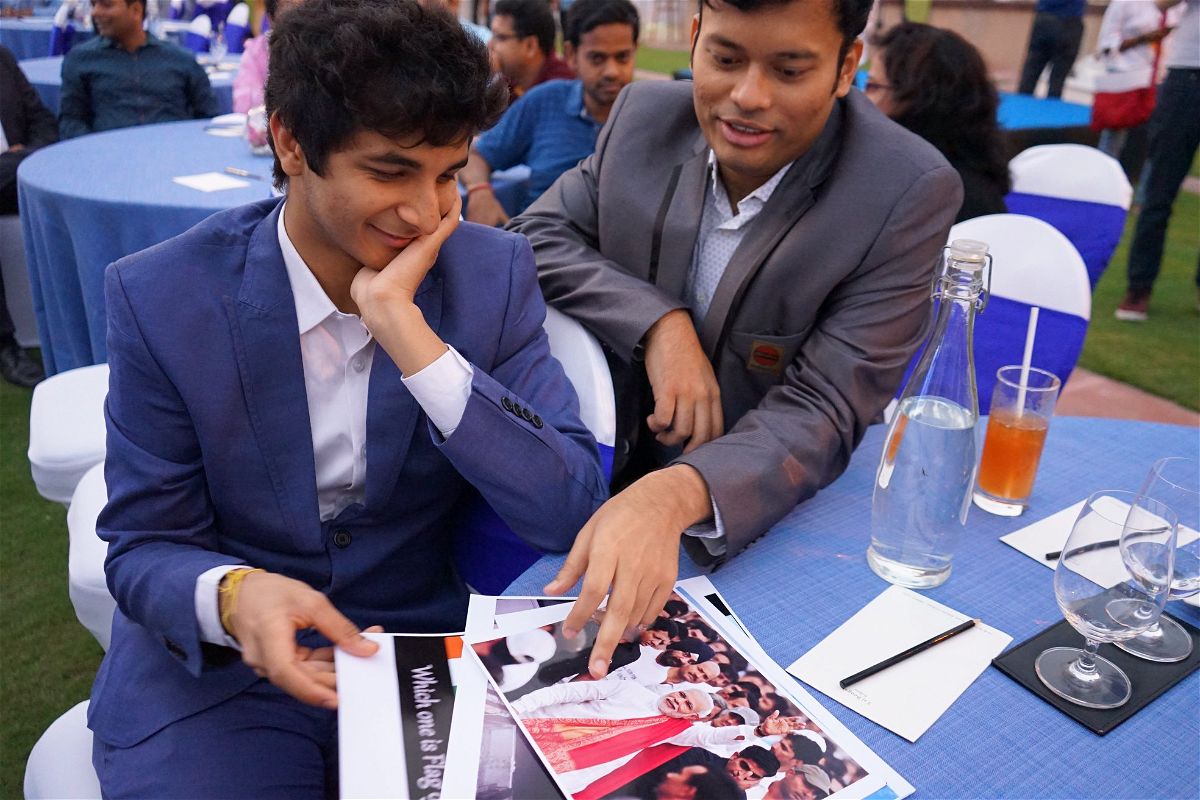 So did Surya Sekhar Ganguly and Vidit Gujrathi

The quiz was not too tough. Before having a look at the answers it would be a good idea for you to attempt at solving the quiz!

Which of the three is the flag of India? An easy one to start off with! 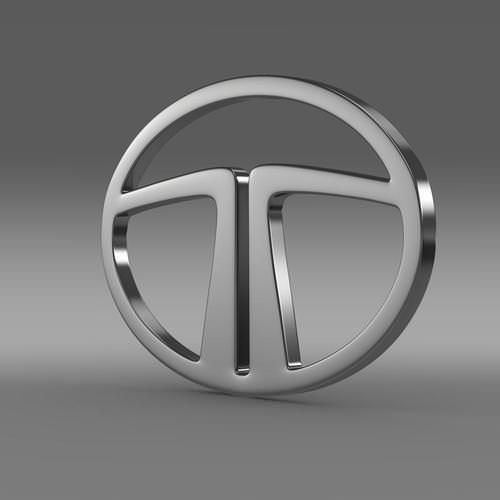 What is the name of the company whose logo you see in the picture? 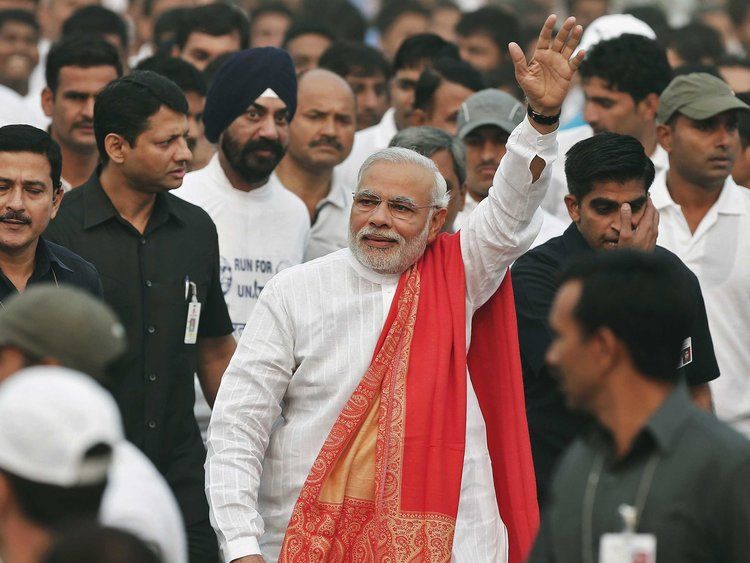 Who is this famous Indian politician? 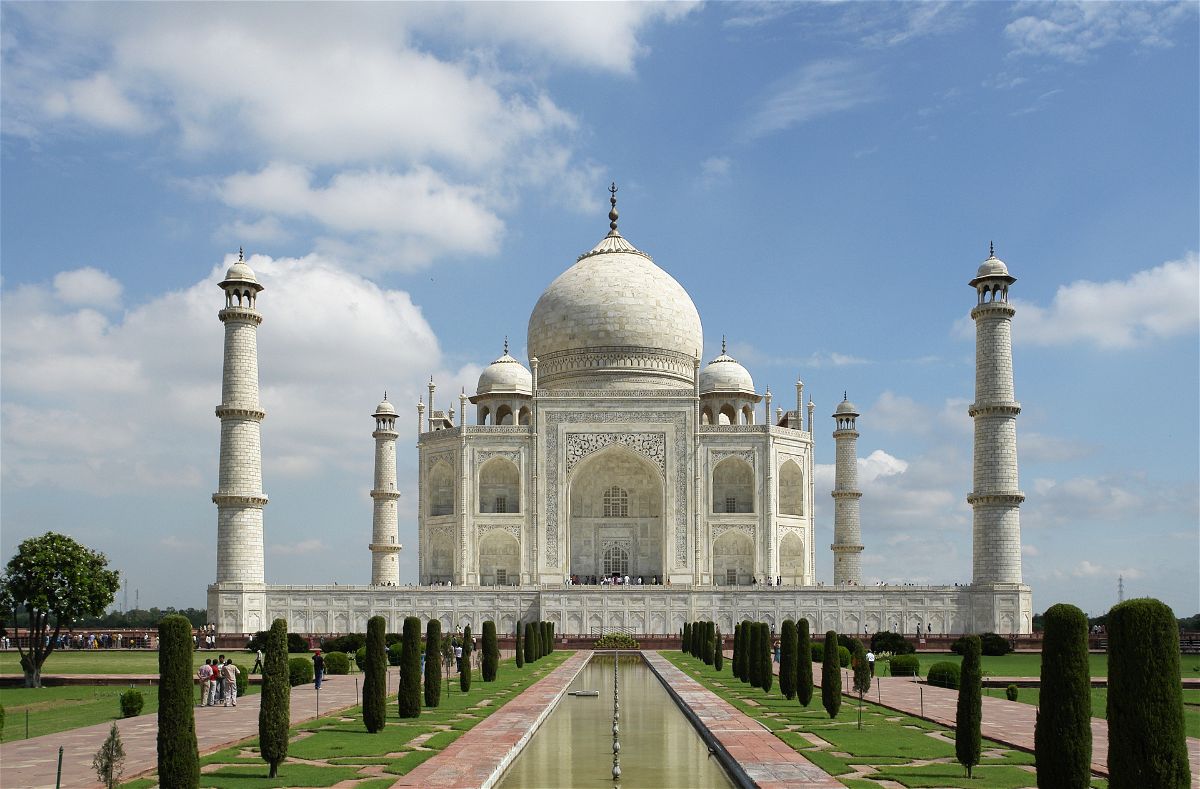 This is one of the seven wonders of the world that exists in India. What's the name of this place? 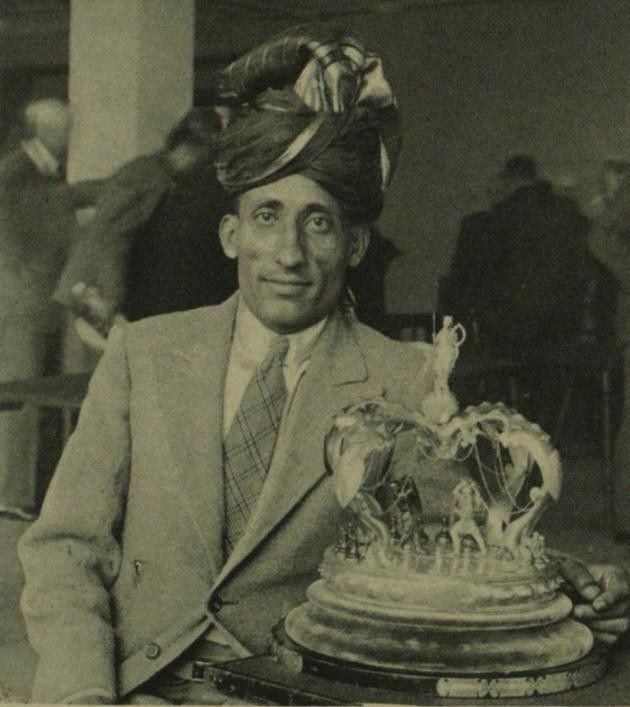 A slightly tougher one. Who is this first great chess player to have come from India? Hint: He beat Jose Raul Capablanca in the early 1900s 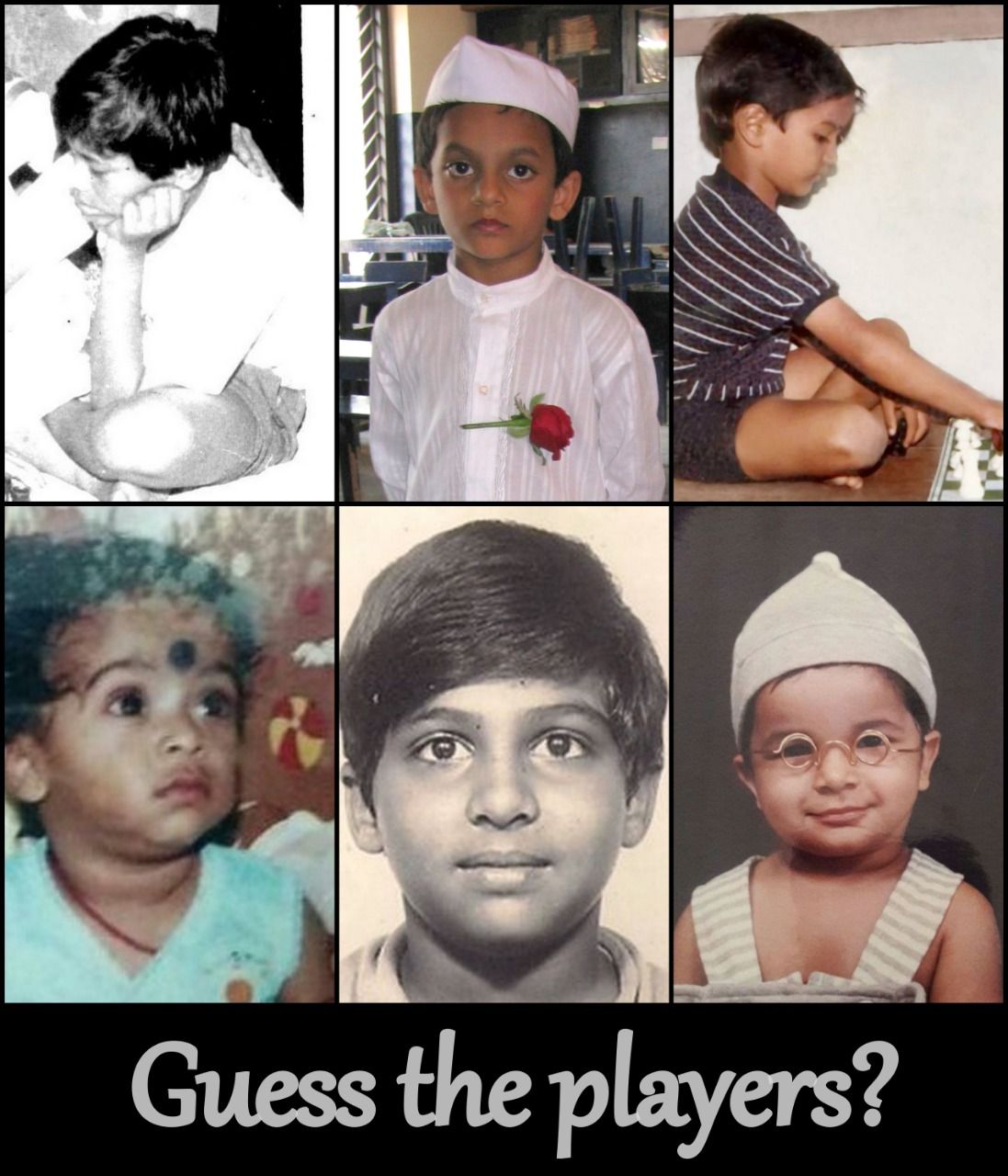 This was the one where a lot of people got stuck. These six players will play at the Tata Steel Chess India 2018. Can you guess who they are? 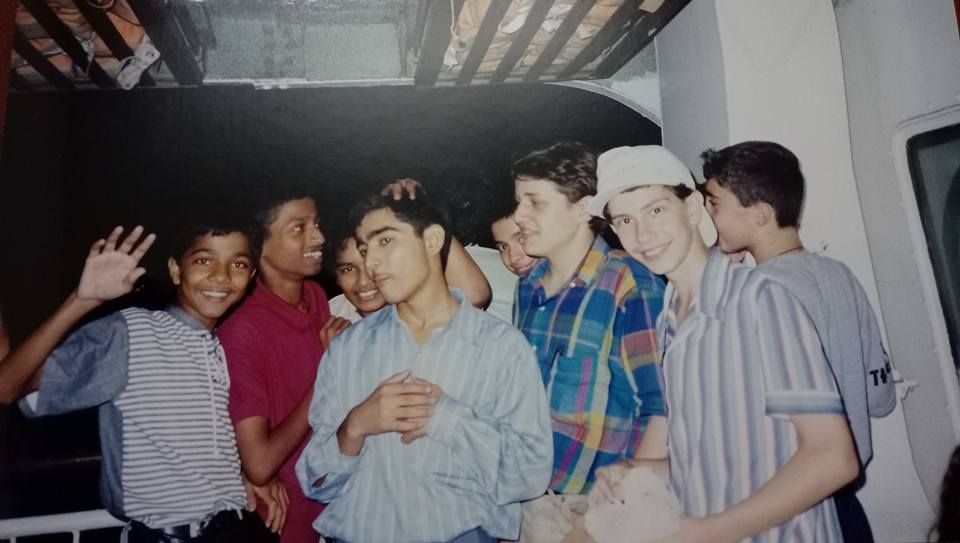 Two players from this picture are going to play at Tata Steel Chess 2018. Can you identify them?

The main difficulty faced by people was to solve the photo where the faces of six Indian players are given! While Nakamura and So struggled really hard, Levon Aronian breezed through all the questions!

Everyone knows that Levon Aronian is a class act on the chess board. But through this video, you also get to know what a well-read person he is. Levon was confronted by a special quiz prepared by the ChessBase India team - the India quiz, in which we asked the International players a few things about India. Levon was simply unstoppable as he answered questions related Taj Mahal to prime minister of India, with ease! Levon also recounts his experience of World Youth Olympiad in 1998 where he was able to trick Pentala Harikrishna with a very nice idea off the board. In the end of the video Levon tells us his take on the World Championship Match beginning in London from today and at the same time wishes all the viewers of ChessBase India a very happy Diwali.

It's for the first time that Hikaru Nakamura is in India. We ask him about his experience in India until now. We then come to the India quiz that we have prepared for the international GMs. Nakamura shows his fantastic general knowledge as he blitzes through the questions! The last two prove to be the most difficult for him as he tries hard to crack the photos of Indian players! Check out the video! You are sure to be entertained.

Wesley So took the Indian quiz at the opening ceremony of the Tata Steel Chess 2018. It was a roller coaster ride for Wesley as he found some questions quite easy, but some were extremely tough. At the end he stumbled upon a picture where he just couldn't identify Levon Aronian. At the end he said, "Levon has become more handsome now!"

The India quiz was just meant for players outside India, but Ganguly and Vidit gave a go at it! And although some questions were very easy, in some of them they did have a tough time!

Shakhriyar Mamedyarov doesn't like to give too many interviews. But when he arrived in India he was in an altogether different and light mood! He is the top seed at the Tata Steel Chess India 2018. It is exactly after a gap of 10 years that he is back to India. We ask Shakh about how he feels in India, the inclusion of Pragg and Nihal in the tournament, what is his secret of such phenomenal growth in a last few months and lastly about the World Championship match! Mamedyarov is rooting for Fabiano Caruana!
World's youngest Grandmaster, former World Rapid and Blitz Champion, GM Sergey Karjakin talks about arriving in India for the very first time, his thoughts on budding chess talents of India, Nihal Sarin and Praggnanandhaa, Indian food and the World Championship.

It's a big moment for Indian chess that a super tournament has finally made it to our country. A lot of people have worked hard to make this possible, but one of the most important personalities it Jeet Banerjee, the director of Game Plan - the company which is organizing the Tata Steel Chess India 2018. We ask Jeet about the challenges involved in putting this grand show together, how did he decide to get Pragg and Nihal in the tournament and whether this would be a continued involvement in chess or just a one-off event by Game Plan. Game Plan is the company that manages Kolkata Knight Riders in IPL.

On the eve of Tata Steel Chess India 2018, Pentala Harikrishna talks about getting the opportunity to visit home due to this tournament, his last tournament in India, how did it go when he was in Kolkata last time and the World Championship.
Vidit Gujrathi is a man with some great bit of stamina! This is his 5th tournament on trot! It all started with the Olympiad in Batumi, followed by representing Novy Bor at European Club Cup, then the Isle of Man International 2018, playing for the Novy Bor team in Czech League and after all this European travel, he is now in Kolkata to play the Tata Steel Chess India 2018. How did Vidit do in all these events and how does he manage to keep his stamina? We ask the man himself.
GM Surya Sekhar Ganguly speaks in his native language Bangla in this interview where he talks about never facing Anand in a tournament, Hari being his closest friend in the tournament, his last tournament in Kolkata and of course the World Championship match.

It's a great opportunity for 14-year-old Nihal Sarin, who will fight it out against the best players in the world of chess in the rapid section of the Tata Steel Chess India 2018. The organizers have added this exciting element in the tournament to have Nihal Sarin in the rapid and Praggnanandhaa in the blitz section. The idea was to give these two talented Indian youngsters a chance to fight with the best players in the business. But isn't it overwhelming? For 14-year-old Nihal Sarin to play against guys like Anand, Nakamura, Aronian, So, Karjakin, Mamedyarov! We speak to Nihal at the opening ceremony and get to know what's going on in his mind!

Tania Sachdev is one of the most colourful personalities of Indian chess. She is at the Tata Steel Chess India 2018 as the commentator. We ask Tania to make some bold predictions about this tournament and also the World Championship and she does not shy away! Check out what she has to say. Join all the action from 9th of November 2018 at 2 p.m. to see Tania and Lawrence Trent as live commentators.
IM Lawrence Trent talks about commentary, making ChessBase DVDs, his weekly show, his picks for Tata Steel India 2018 and World Championship.
Jeroen van Den Berg is one of the most experienced tournament directors in the world of chess. He has been ensuring the success of Tata Steel Chess in Netherlands for 20 years now. This is the first time he is in India and he hopes that this tournament becomes a regular affair in the country.
Dibyendu Barua was the man responsible for the growth of chess in Kolkata. He is the second GM from India. What does he feel when a such a big event is held in his city? What are the emotions that he is going through? In this interview we get to know more about how this entire tournament came about.