WGM Vaishali R started the tournament as the thirteenth seed. She scored wins in all seven rounds to become champion, finishing ahead of 3 GMs including her brother Praggnanandhaa. IM P Saravana Krishnan also scored 7.0/7, however due to a better tie-break score, Vaishali clinched the championship and Saravana had to settle for second position. They both finished a full point ahead of the competition. IM Harikrishnan A Ra scored 6.0/7 to secure third position, top seed of the tournament, National Triple Crown champion Aravindh Chithambaram was placed fourth and he was the only GM to finish in top fifteen. Total 248 players took part in this second leg of All India Chess Grand Prix. Photo: R Anantharam

Vaishali finishes ahead of three GMs

Former World under-12 & under-14 champion and WGM R Vaishali of Chennai won the Sri Kaliswari College FIDE Rated Rapid chess tournament at the college campus, Sivakasi on 17th November. She won the tournament ahead of several GMs including the top seed of the tournament and the National champion Aravindh Chithambaram of PSPB, her own brother and the reigning World under-18 champion R Praggnanandhaa and former National Blitz champion R R Laxman of ICF. On the seeding list, Aravindh was followed by IMs S Nitin of S Railways and A Ra Harikrishnan of Chennai. 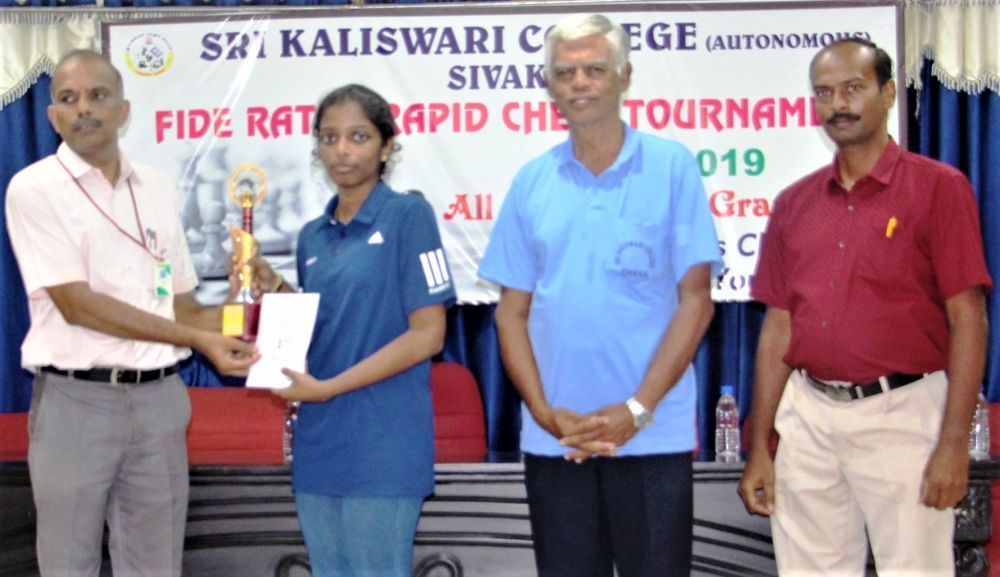 Here is Vaishali's one of the best win of the tournament against Senthil Maran K in just 20 moves of round six.

Like Vaishali, IM P Saravana Krishnan also scored seven wins in seven rounds to tie with her for the first place. But the Buchholz tiebreak pushed him to the second spot. 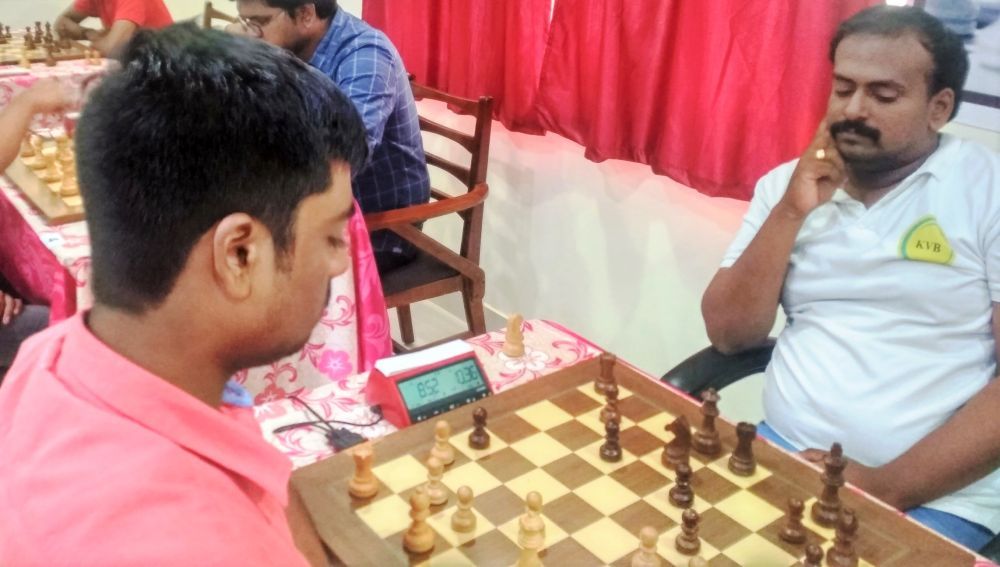 Saravana Krishnan beat Harikrishnan in the final round of the tournament.

While the first three rounds had no upsets, the fourth round compensated it in plenty. The two girls from Chennai P Bala Kannamma and S Harini (wife of GM Karthikeyan P) shocked the second seeded Nitin and the former National Rapid champion GM R R Laxman of ICF respectively. Youngster L R Srihari of Chennai accounted for the Railway IM B T Muralikrishnan in this round. 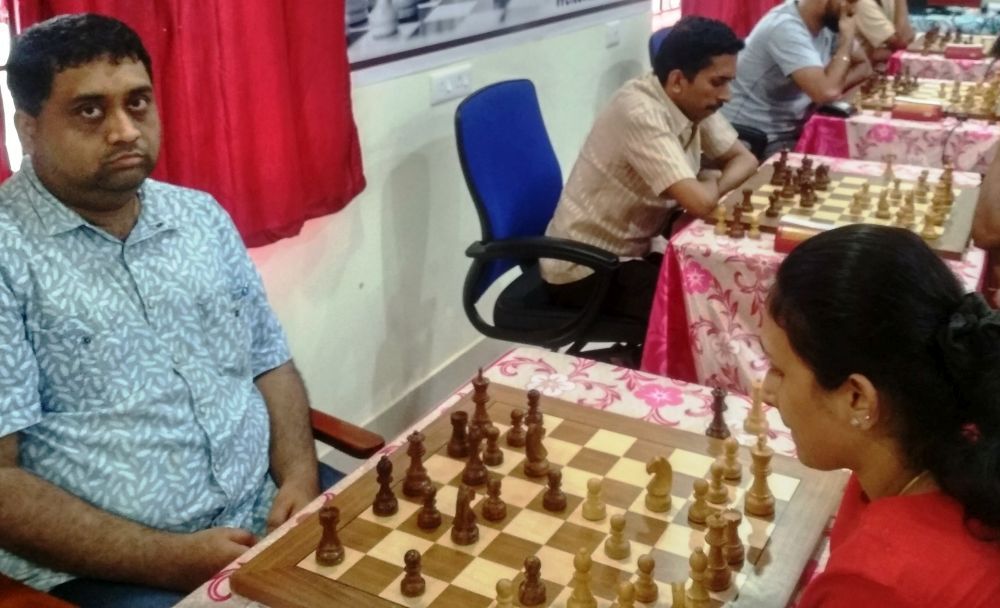 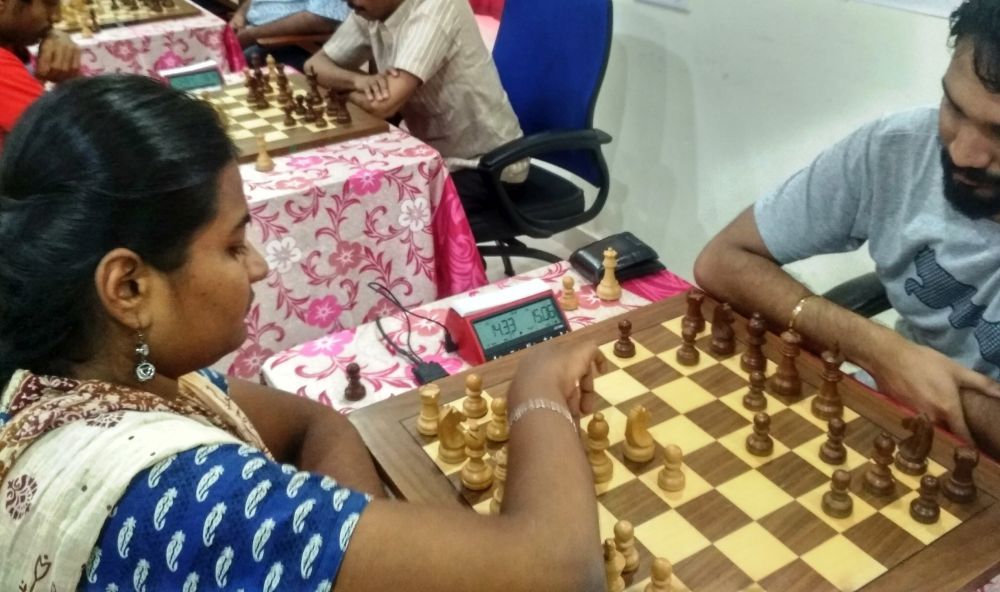 Another victim in the fourth round is the second seeded IM S Nitin of Southern Railway to the Tamil Nadu lady P Bala Kannamma | Photo: R Anantharam

In the fifth round, R Sibi Vishal of Namakkal, rated 1978 drew with the top seed Aravindh, who has a rapid rating of 2546. Six players shared the lead with five points each at the end of the fifth round. 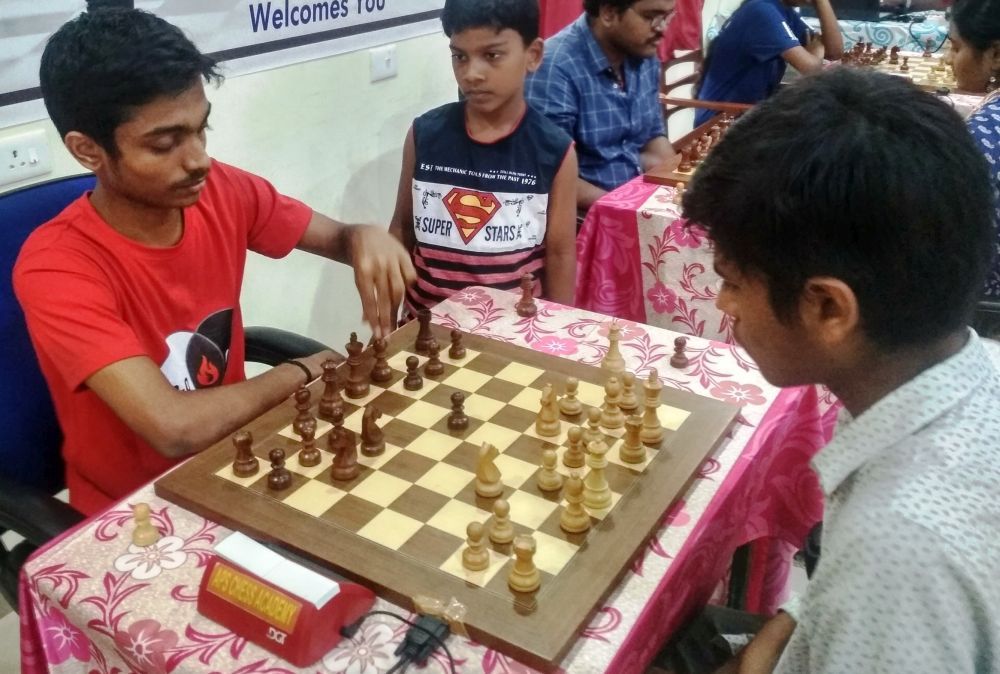 On the top board of the sixth round, the third seeded IM Harikrishnan, defeated IM Shyam Nikhil of ICF, Saravana Krishnan beat Avinash Ramesh and R Vaishali got the better of Senthil Maran, leaving the three players at the top with six points from six rounds. 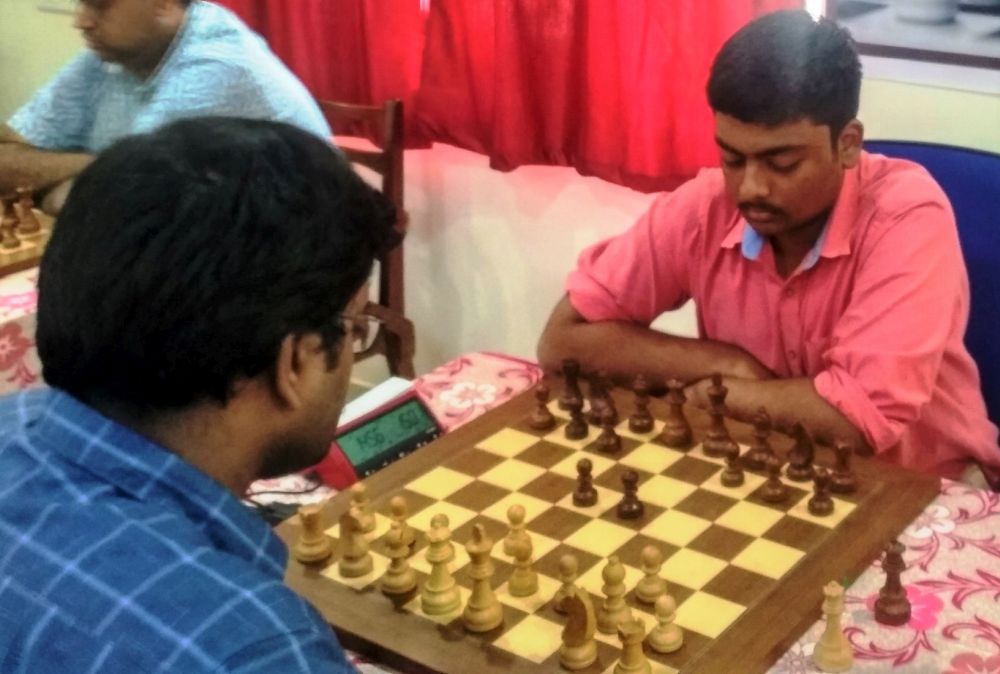 Both Vaishali and Saravana Krishnan maintained their cool to outwit their opponents Sibi Vishal and Harikrishnan respectively to record their seventh win in seven rounds to tie for the first place.

Eight players scored six points each to be ranked from third to tenth place. IM A Ra Harikrishnan of Chennai and GM Aravindh Chithambaram of PSPB were placed third and fourth respectively. 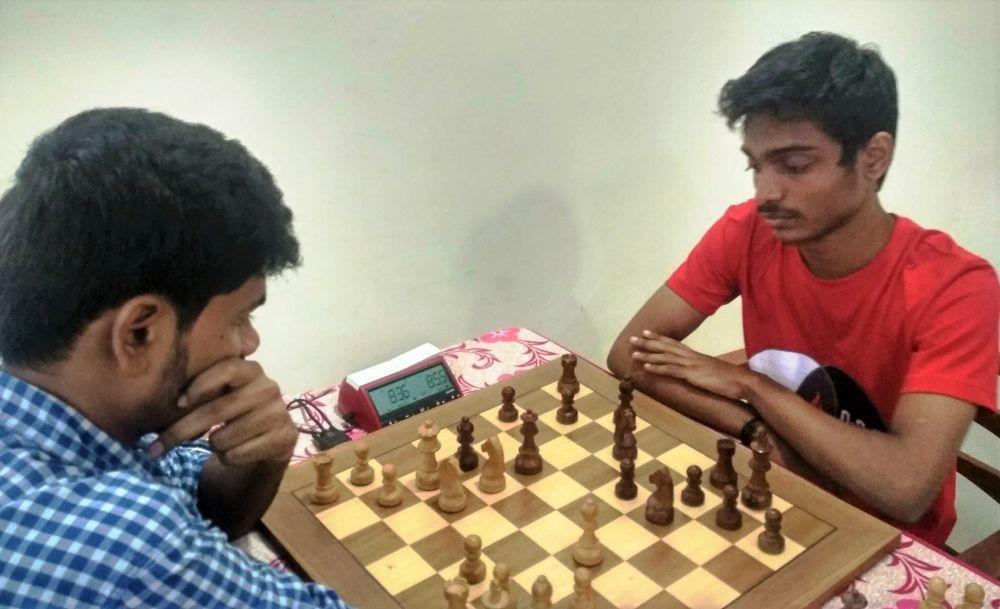 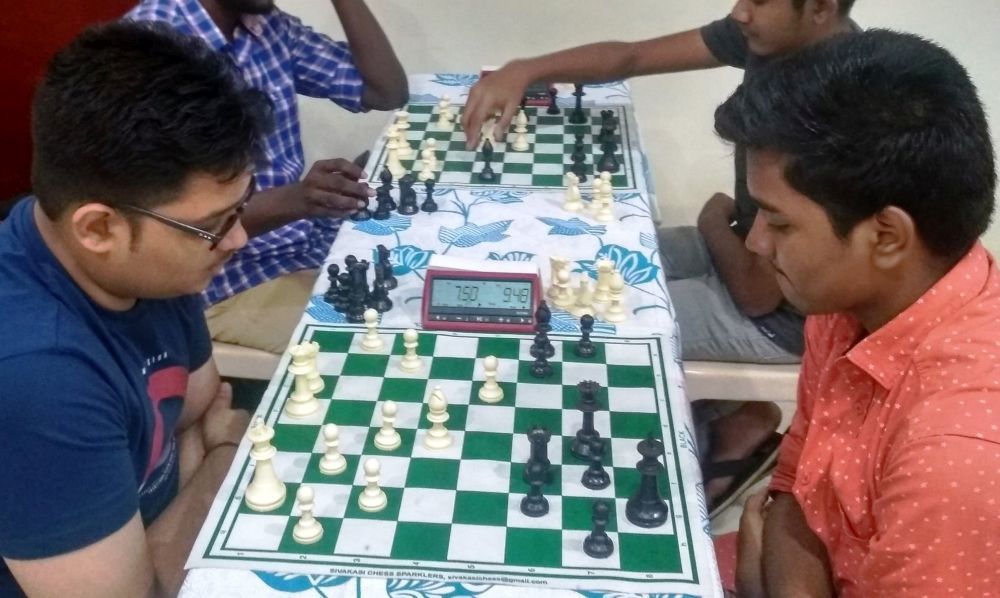 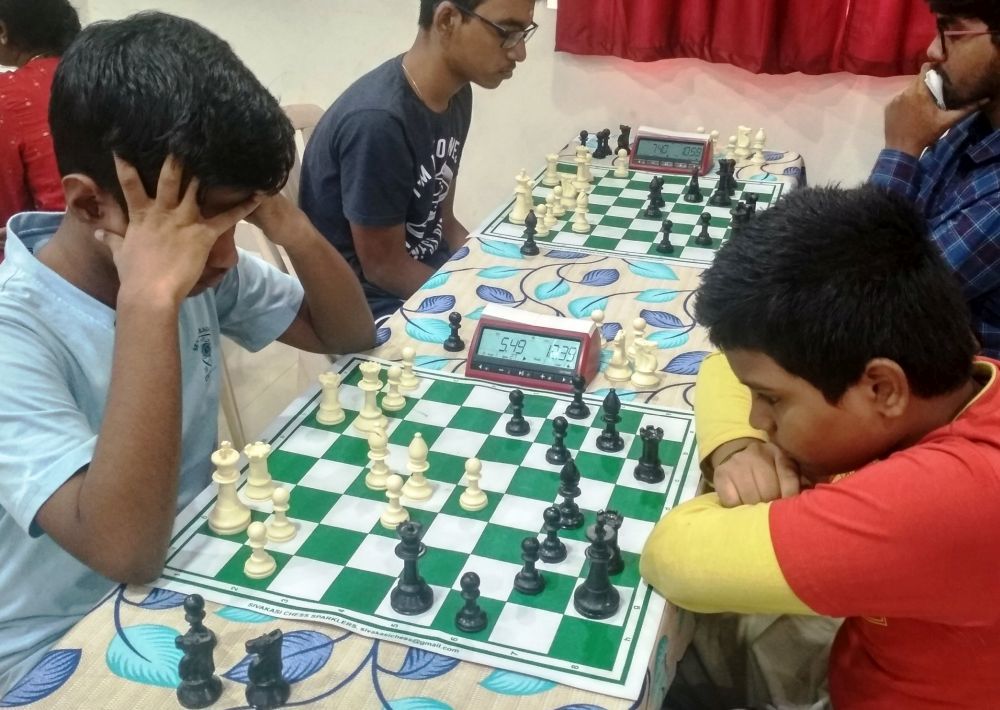 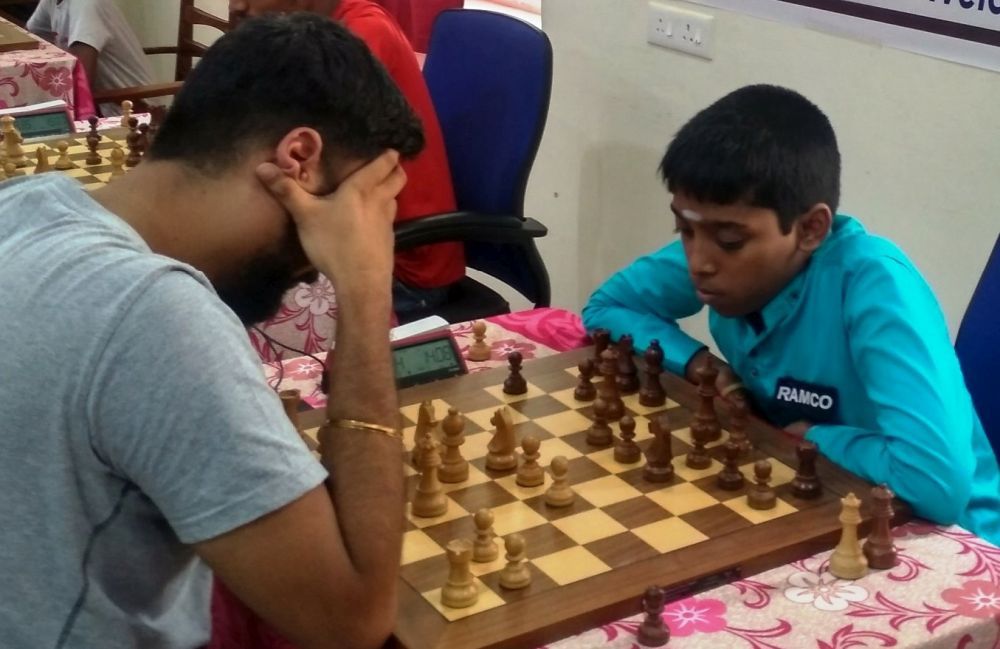 Both second seeded IM Nitin and World under-18 champion R Praggnanndhaa could not figure in the top ten list | Photo: R Anantharam

The tournament is the second leg of the All India Chess Grand Prix series and P Saravana Krishnan is leading the Grand Prix with 268.8 points from two tournaments. Three more tournaments at Madurai (25th December), Karaikudi (26th January) and Coimbatore (23rd February) will decide the top ten earners of the Grand Prix points, who will play a round robin tournament for a prize money of ₹125000. The winner of each leg gets 200 GP points and the runner-up 160 points. The tenth placed player will receive 40 GP points.

The first leg was held at Tiruvarur wherein FM M Pranesh was the outright winner to secure the maximum GP points. The remaining nine places and the GP points were shared, each getting 88.88 points. 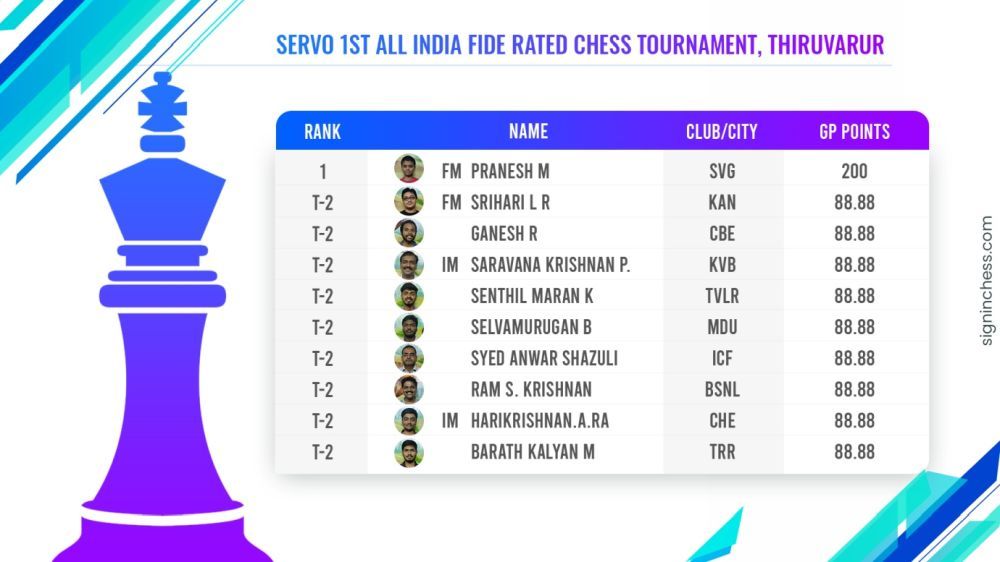 In the overall standings of the Grand Prix, FM M Pranesh is behind IM Saravana Krishnan in the leader table and WGM R Vaishali is placed third.

The tournament witnessed a total participation of 248 players from all over the country including Tamil Nadu, Pondicherry, Karnataka and Kerala. It was organized by Sivakasi Chess Club on 17th November 2019 at Sri Kaliswari College, Sivakasi in Tamil Nadu.