Second seeded IM Ra Harikrishnan scored 7.0/8 and won Ramco 2nd FIDE Rated Open 2019. Six other players also finished with the same score along with top seed Laxman R R. Harikrishnan edged ahead of him in the fourth tie-break score by 0.25 to clinch the championship. He received ₹70000 cash and a beautiful trophy for his efforts. Laxman was declared the first runner-up and Senthil Maran K secured the second runner-up position. Total 379 players from eight states across the country participated in this four-day eight round event where total prize fund was ₹500000 and 98 cash prizes were distributed. A detail tournament report by the Chief Arbiter of the tournament IA R Anantharam including games and photos. Photo: IA R Anantharam

Eighteen year old IM A Ra Harikrishnan of Chennai stood first among the seven players who scored 7.0/8, to win the Ramco Institute of Technology 2nd FIDE Rated Open organized by the college, a unit of Ramco Group of Industries. 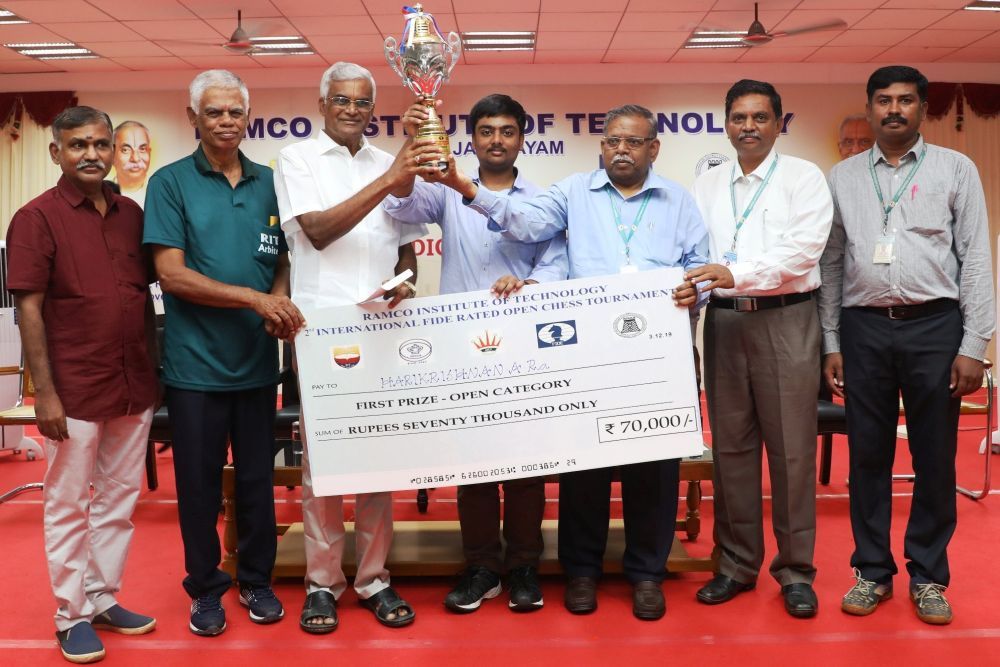 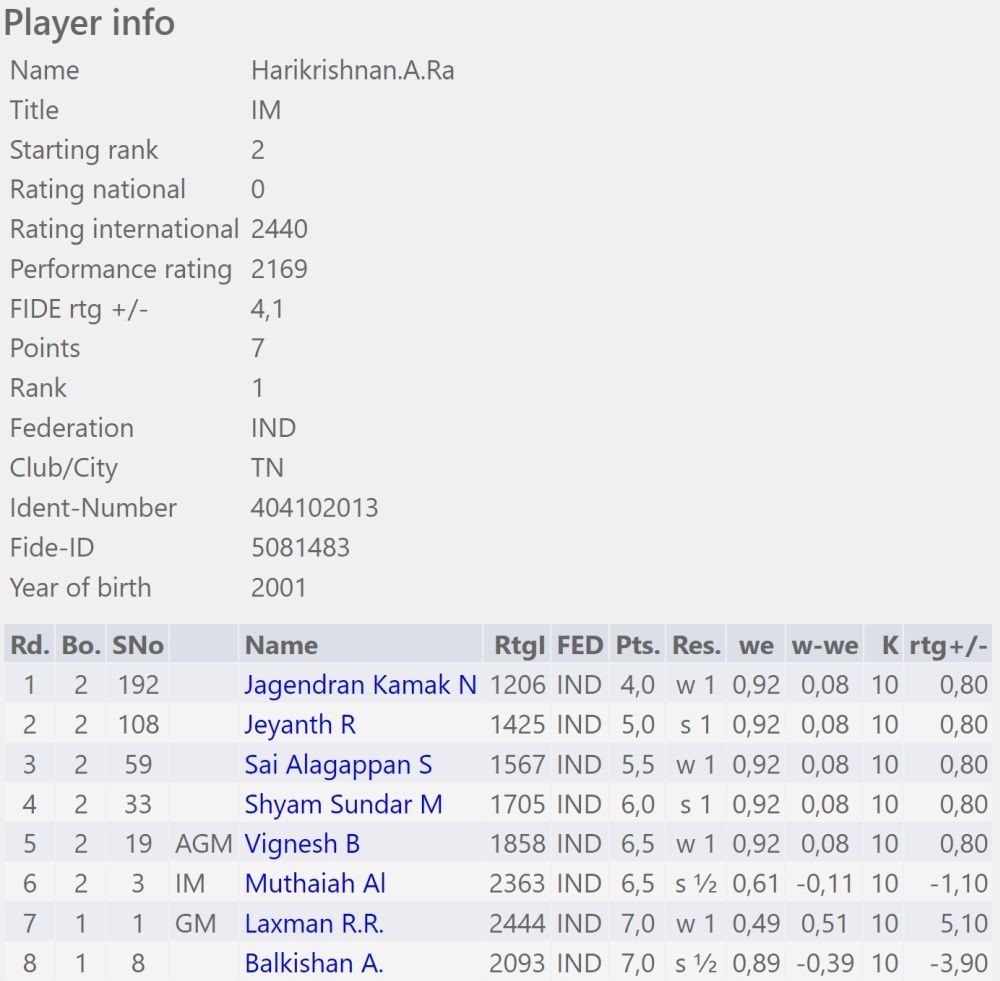 Harikrishnan's best win of the tournament was against the top seed GM Laxman R R in the penultimate round.

However his last round draw against Balkishan A is worth mentioning as he defended valiantly with three minor pieces against a Queen.

Ramco is a very popular name in the chess circle as the first sponsor of the five times World champion Vishy Anand and the current sponsor of the World under-18 champion GM Praggnanandhaa R and his sister WGM Vaishali R. The brain behind these chess activities is its chairman P R Venketrama Raja, President of AICF, a keen chess lover and player. 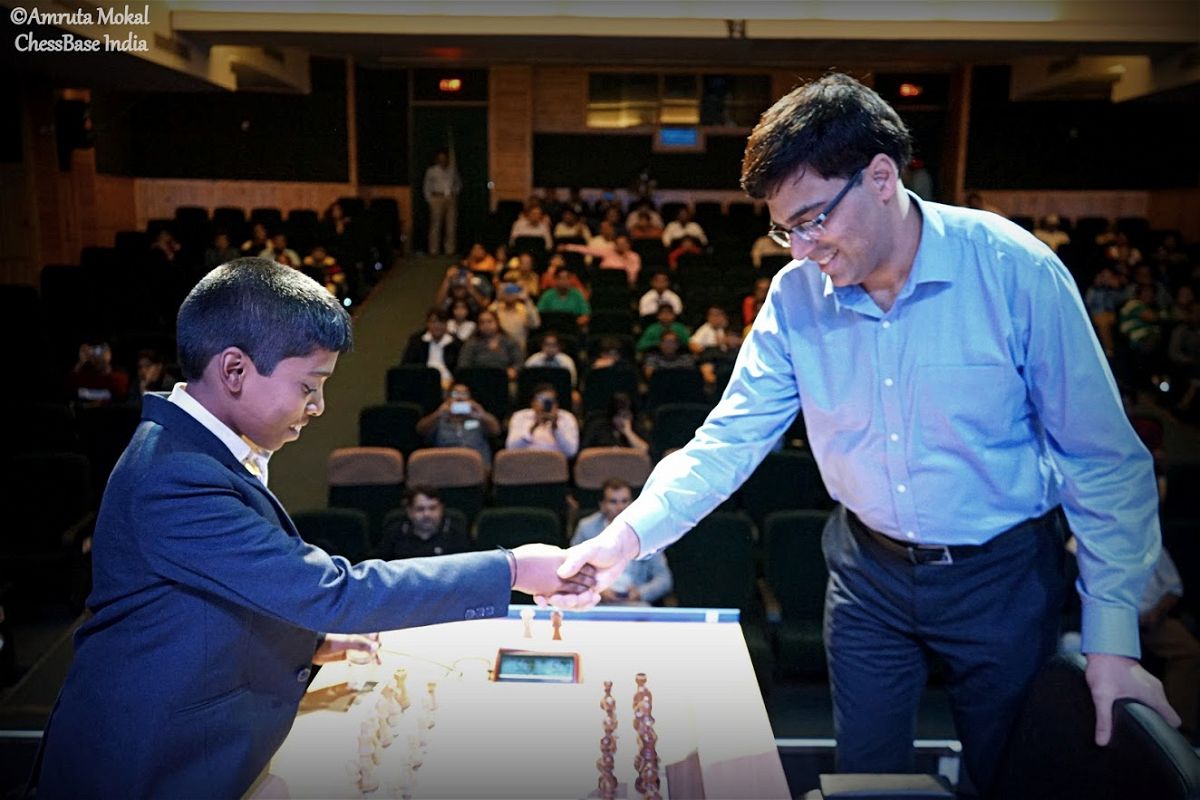 Both Praggnanandhaa and Anand have been the beneficiaries from the Ramco Group | Photo: Amruta Mokal

GM Laxman R R of ICF was the top seed of the tournament, followed by Harikrishnan and IM Al Muthaiah of Chennai. Five players shared the lead with five points each at the end of the fifth round. Laxman defeated R Rathneesh of Chennai, Harikrishnan routed B Vignesh of TN, Selvamurugan of Madurai lost to Muthaiah, IM BT Murali Krishnan of Southern Railway got the better of Vijay Kumar Pakkurti of TN and SS Mangandan of GKCA Madurai had an easy outing against S Aswath of TN. 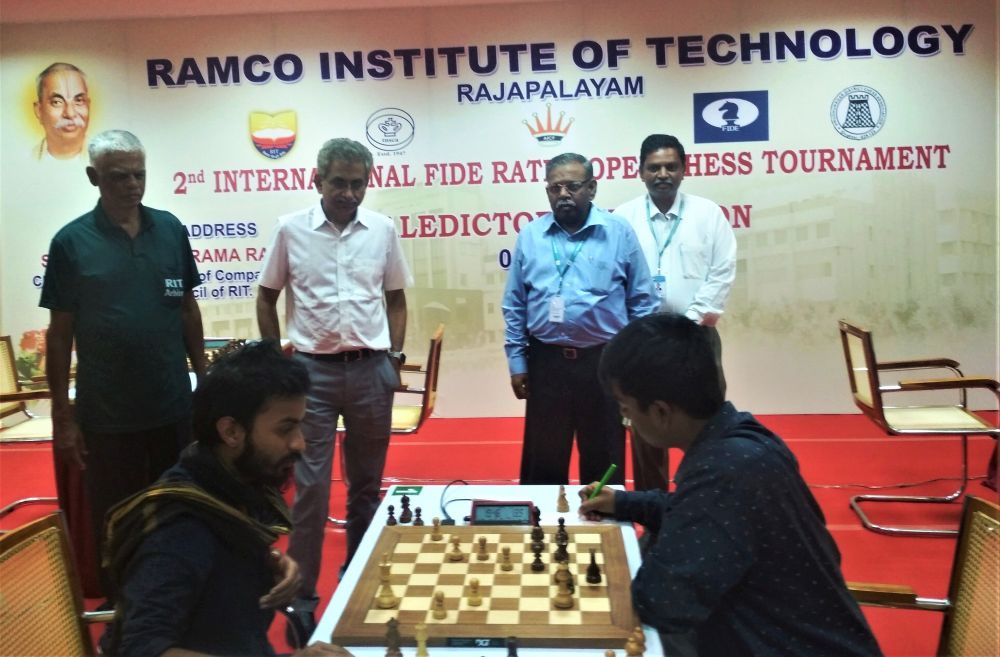 Laxman defeated his friend and rival IM Murali Krishnan to emerge sole leader with six points from six games. Six players were half a point behind him. In the seventh round, in the encounter between the top two seeds, IM Harikrishnan shocked GM Laxman and the eighth seeded Balkishan also upset the third seeded IM Al Muthaiah. The summit clash was set up between the leaders Hari and Balkishan, each having a score of 6.5 points. 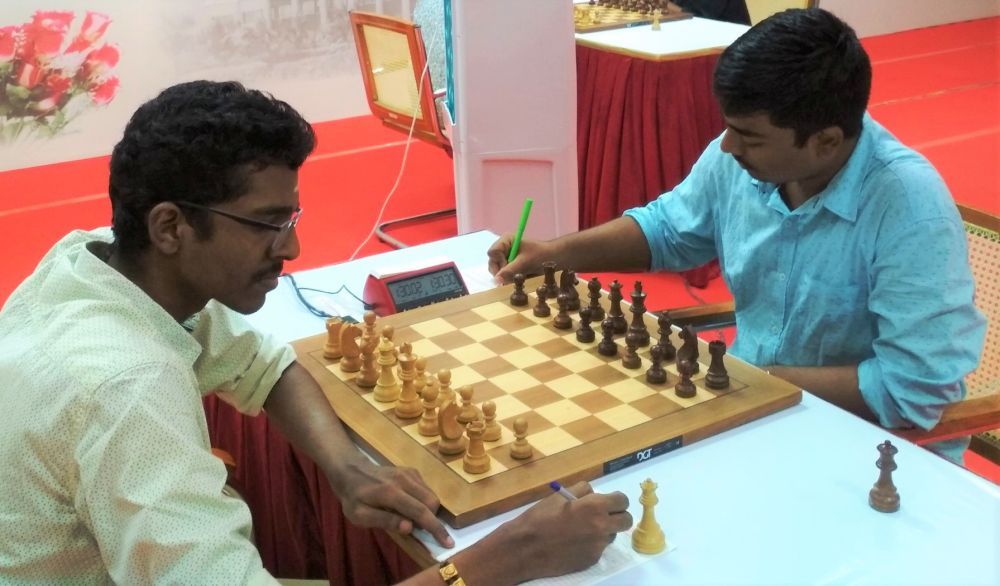 Friends and IMs Muthaiah and Hari shared the point in the sixth round | Photo: R Anantharam 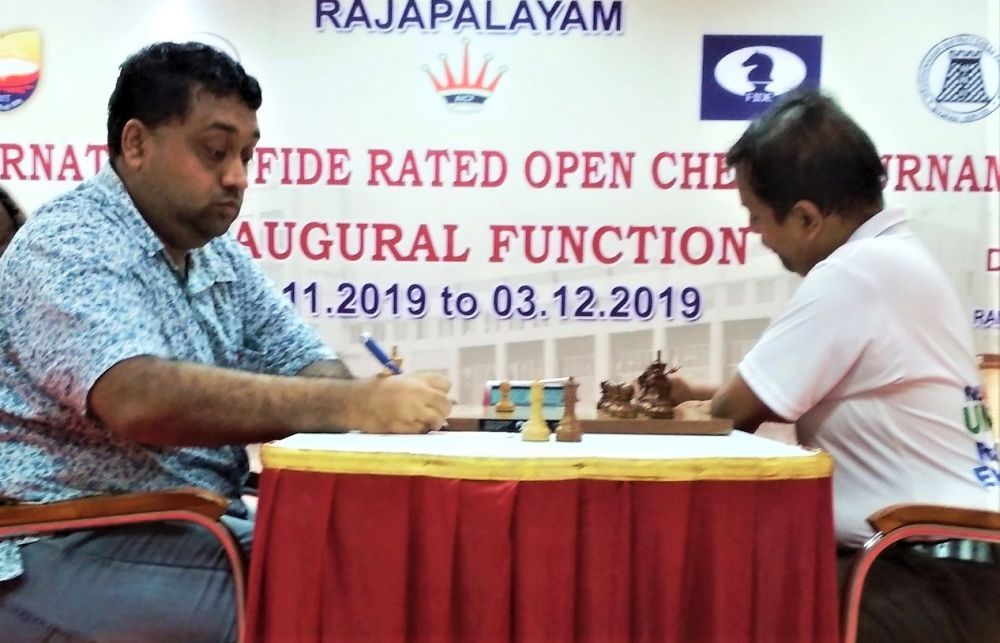 Roommates Laxman and Murali fought and the game ended in favour of Laxman | Photo: R Anantharam

In the final round, Balkishan after obtaining a winning position in the middlegame, frittered away his chances to win the title and settled for a draw with Hari. The exciting game, watched by a large gathering had a nail biting finish, was a climax of the final showdown and brought out the fighting qualities of Hari. 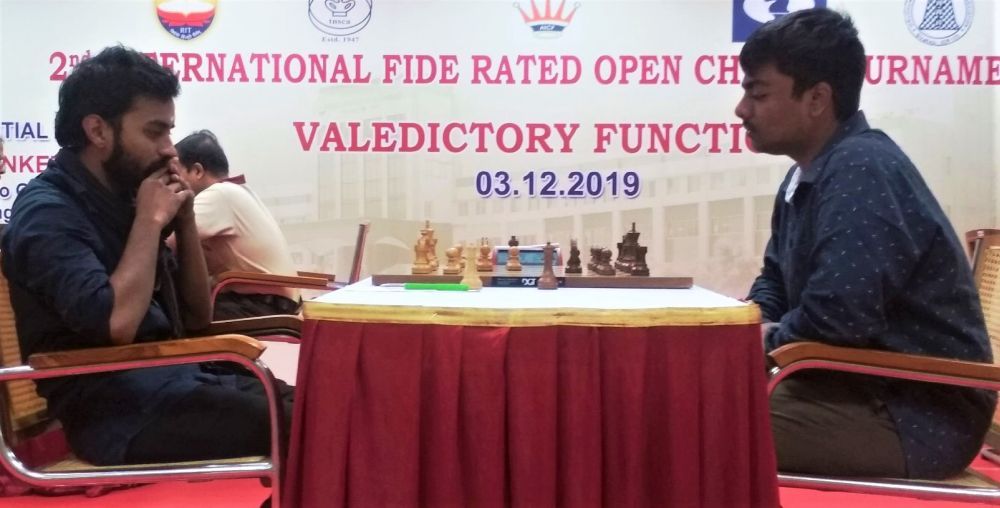 Balkishan of Karnataka missed the title by settling for a draw with Harikrishnan in the final round | Photo: R Anantharam

It led to a seven way tie including both of the above mentioned players, Laxman, Senthil Maran, N Lokesh, S S Manigandan and BT Murali Krishnan. Harikrishnan pipped Laxman at the podium in the tiebreak score to emerge as the champion. Again it was a fantastic finish to decide the champion among the seven players. After having same score in the first three tiebreaks, Hari was ahead by 0.25 in the fourth tiebreak to clinch the title. Harikrishnan won a purse of ₹70000 and Laxman received a cash prize of ₹50000. A total prize money of ₹500000 was offered and cups for various categories. 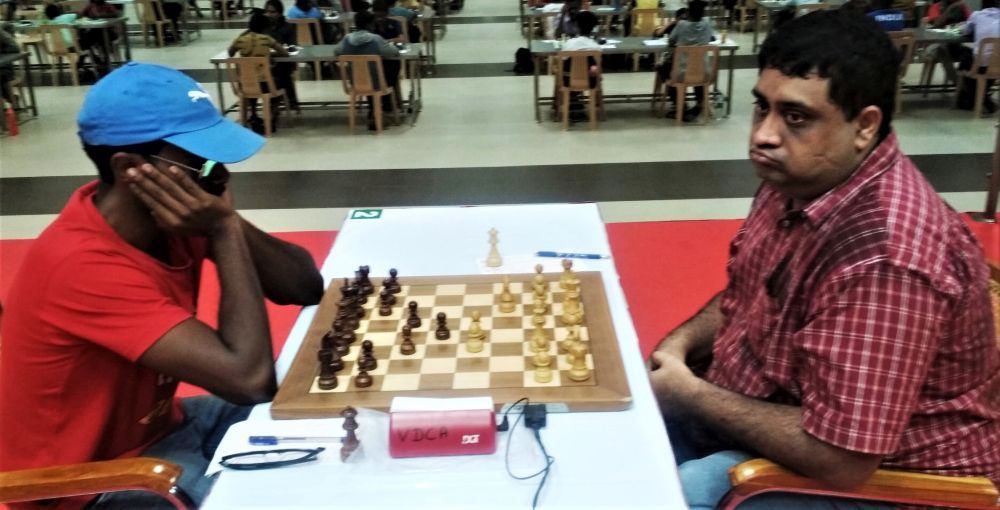 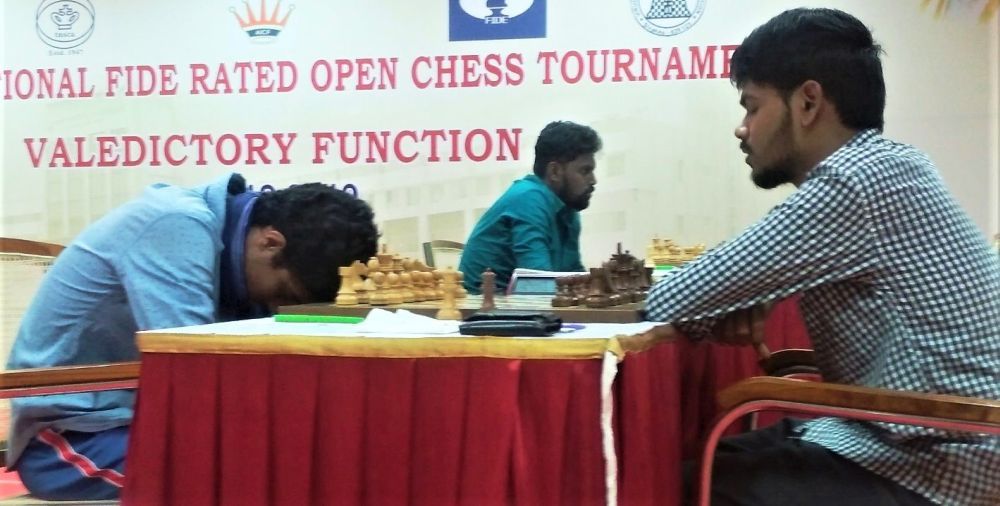 Meditation by Anup Shankar before the game against Senthil Maran who finished as the second runner up | Photo: R Anantharam

The win by Manigandan S S over Sree Veeramani helped him to achieve the sixth rank | Photo: R Anantharam 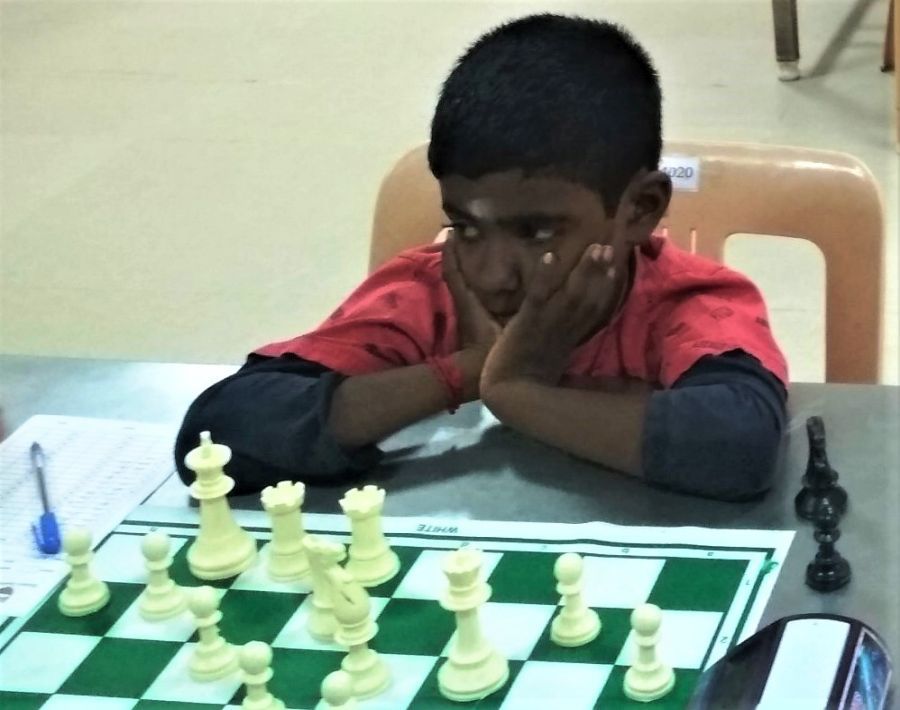 The tournament was an enjoyable one with a huge playing hall, free sumptuous food for players, free sightseeing trip to parents to Andal temple, Srivilliputtur and Ayyanar Falls, a scenic picnic spot. 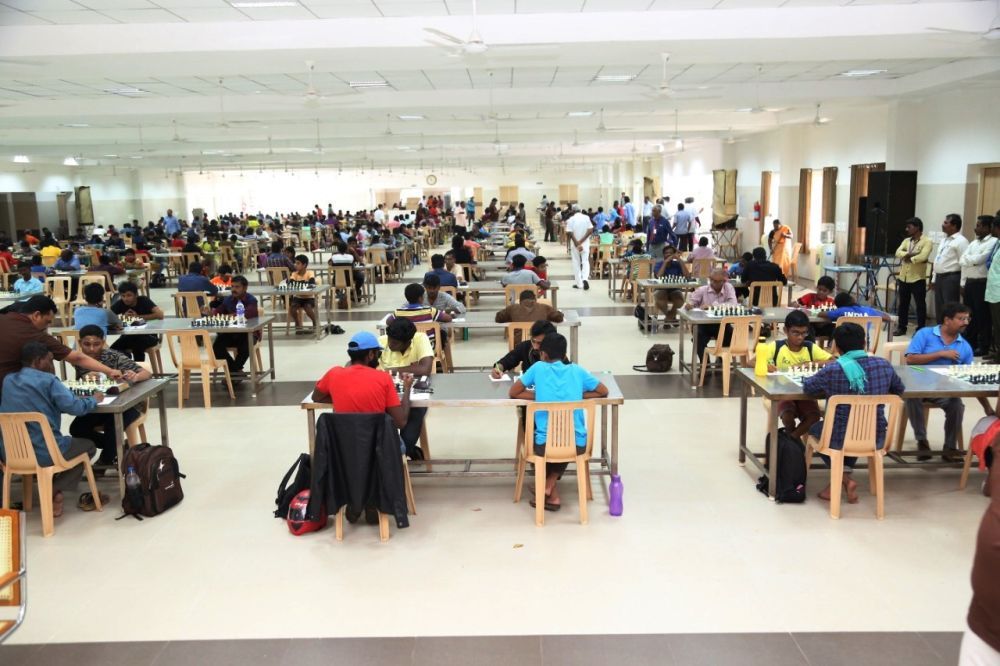 A view of the huge playing hall, which can easily accommodate around thousand players | Photo: R Anantharam 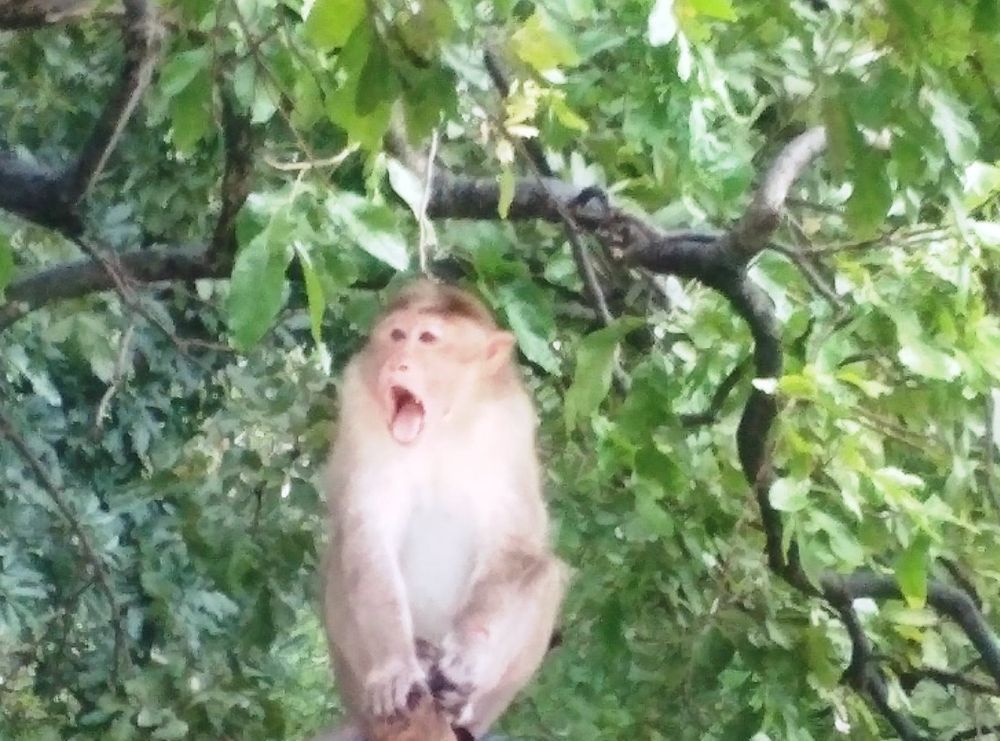 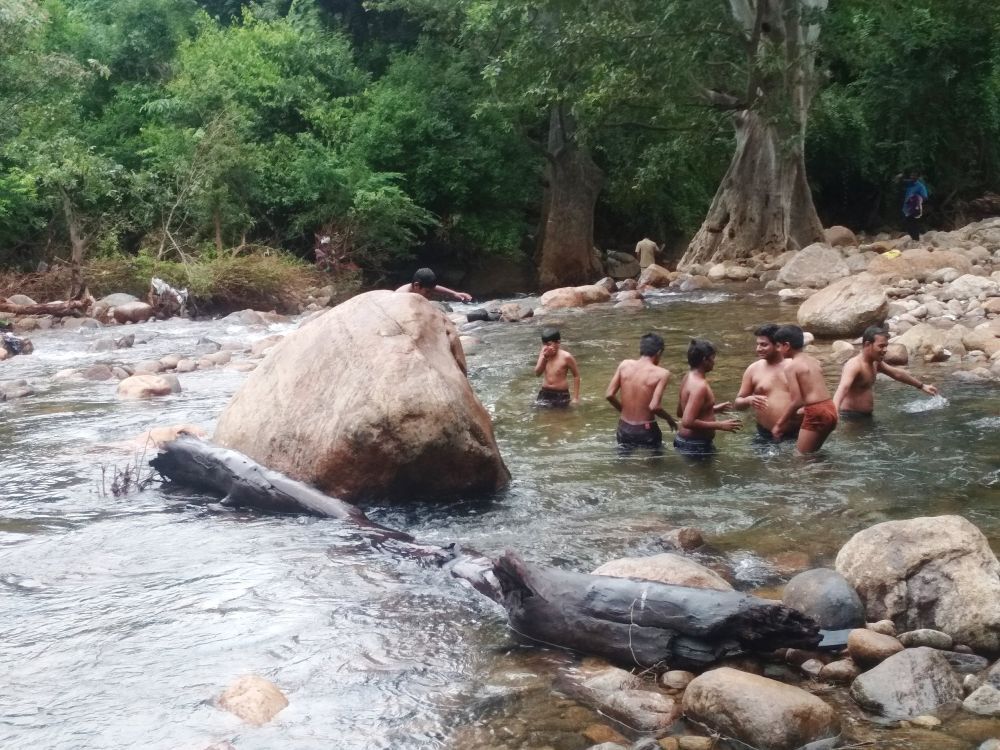 Players enjoying a dip in the wild stream of the forest | Photo: R Anantharam

A total of 379 players from eight states across the country, including GM Laxman R R and three IMs took part in the four day eight round event. The time control was 90 minutes to each player with an increment of 30 seconds per move.