IM Muhammad Khusenkhojaev of Tajikistan surged ahead of six other players who tied with him, to clinch the title of the 1st Courtalam Saaral (a mixture of cool breeze and continuous slight drizzling) FIDE rated tournament organised by Tirunelveli Development Chess Association at Courtalam from 29th August to 2nd September. Total 306 players from four different federation Chile, Nepal, India and Tajikistan participated including a GM and four IMs. Photo: R Anantharam

The tournament had the charm and colour in the participation of GM Vasquez Rodrigo Schroeder of Chile, IM Khusenkhojaev, Dangi Mani Raj of Nepal in addition to the International Masters Sayantan Das of Kolkata, AL Muthaiah and R Balasubramanian of Tamil Nadu. Khusenkhojaev collected ₹70000 in the prize pool of ₹510000. 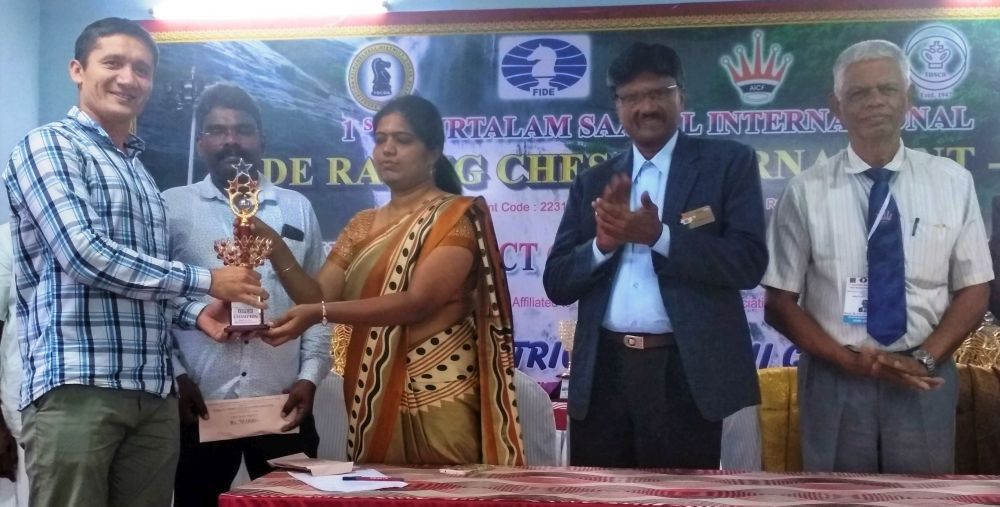 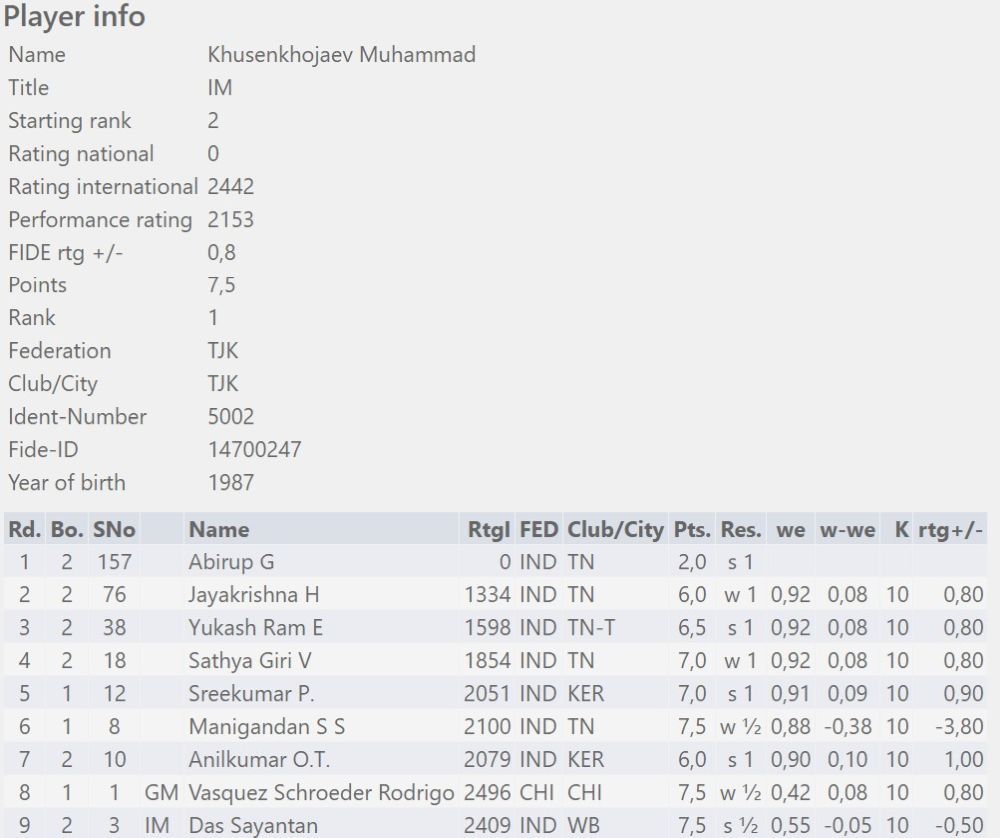 The first four boards of the final round ended without any decisive result, leading to a tie for the first place by seven players with 7.5 points each in a pack of 306 players. Former world under-12 champion Sayantan was placed runner up. 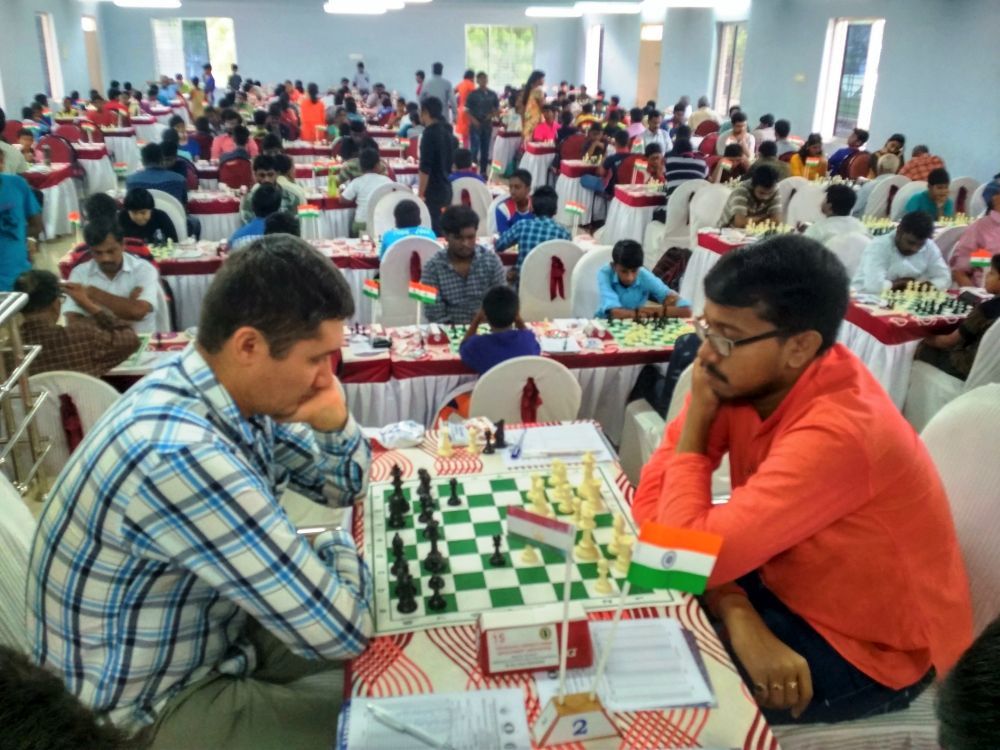 As in the Madurai Athens of the East GM tournament, IM Sayantan Das was runner up in Courtalam also | Photo: R Anantharam 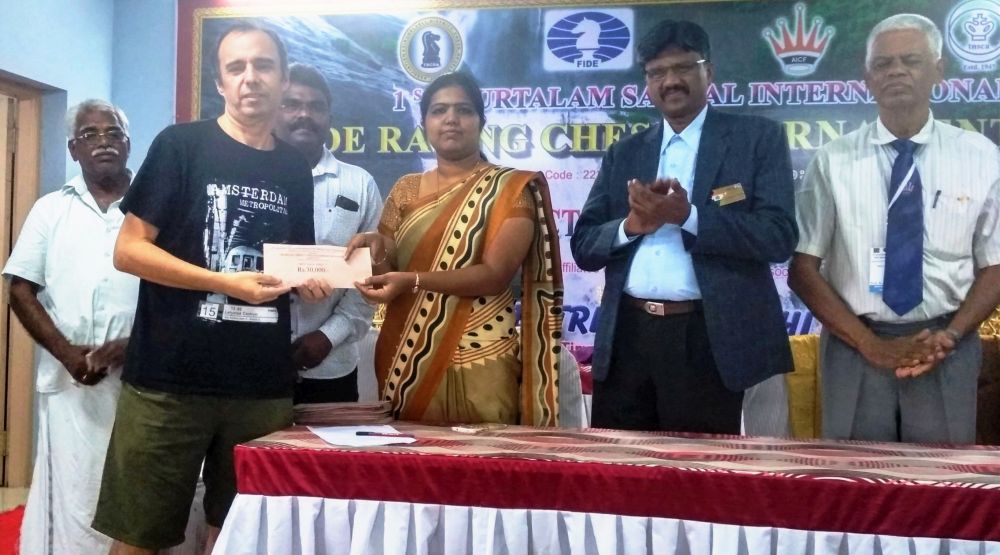 The top seeded GM Vasquez had to be content with the third place | Photo: R Anantharam 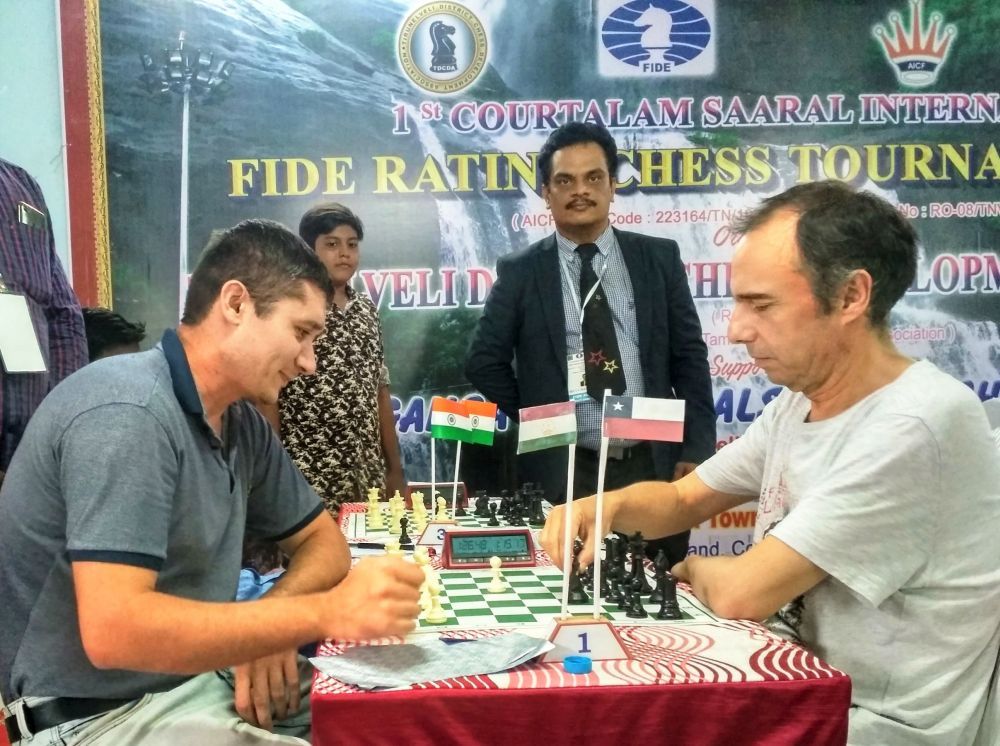 Khusenkhojaev and Vasquez had a quick draw in the final round | Photo: R Anantharam

SS Manigandan of Madurai had a good tournament with a decent score against higher rated players. One of them is in the final round against the only grandmaster in the tournament. 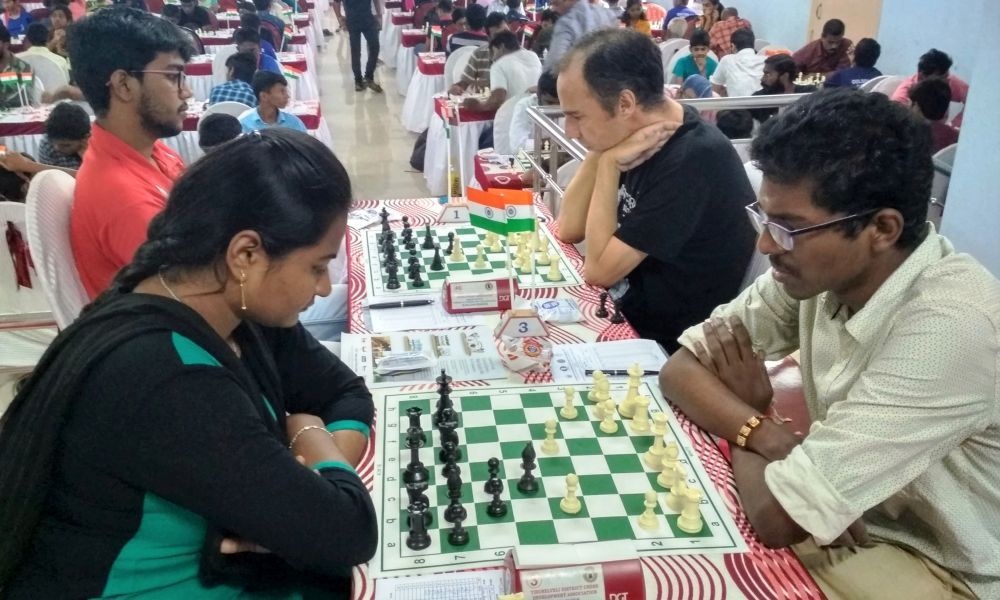 IM R Balasubramanian was off colour losing to Tamil Nadu youngster Alan Divya Raj, helping the latter to get the sixth place. 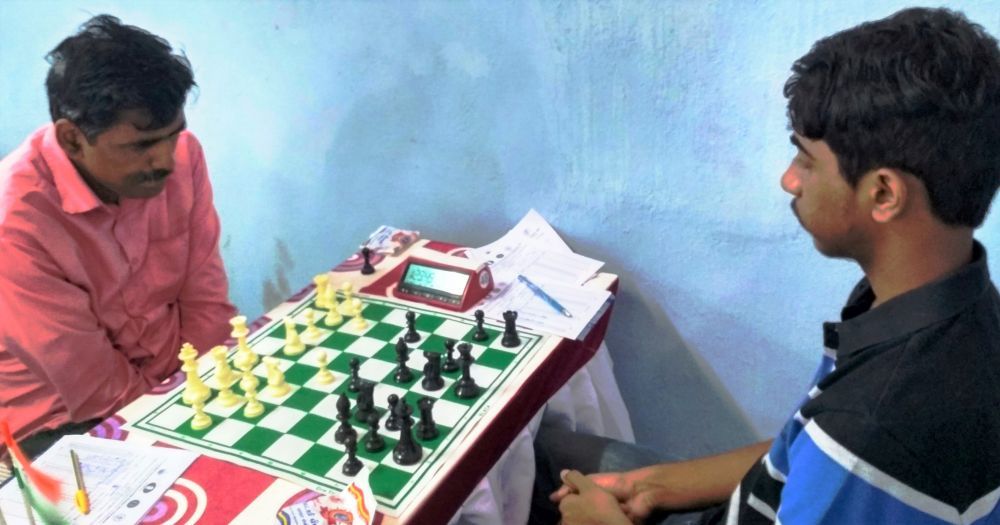 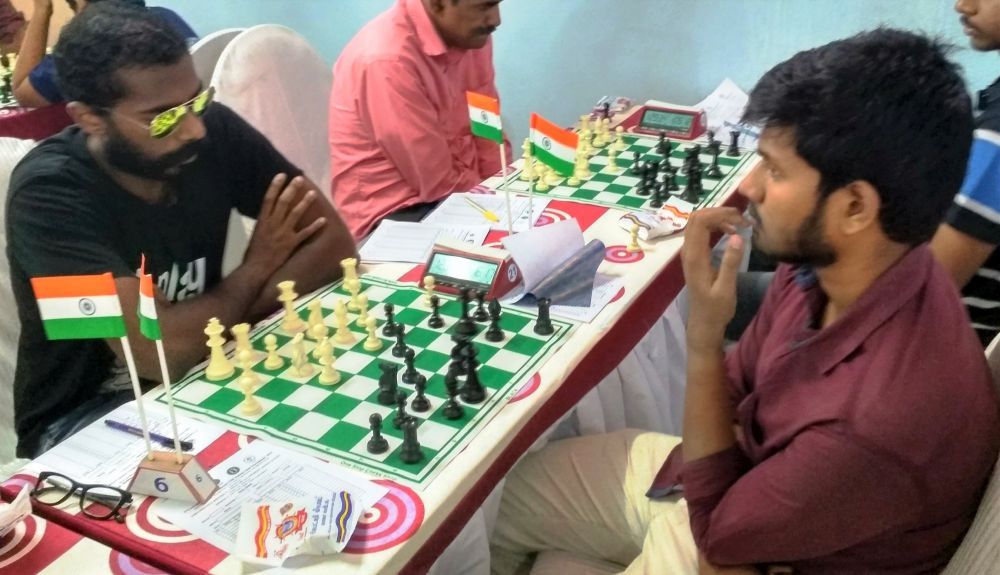 The first three rounds of the tournament went on the expected lines except a few minor hiccups. In the fourth round, Dinesh Kumar J of Tamil Nadu rated 1878 shook the confidence of the top seeded GM Vasquez (rated more than 600 points higher than Dinesh) by holding him to a draw in a queen and pawn ending. Sixth seeded IM Balasubramanian was also held to a draw by little known S Aswath of TN. 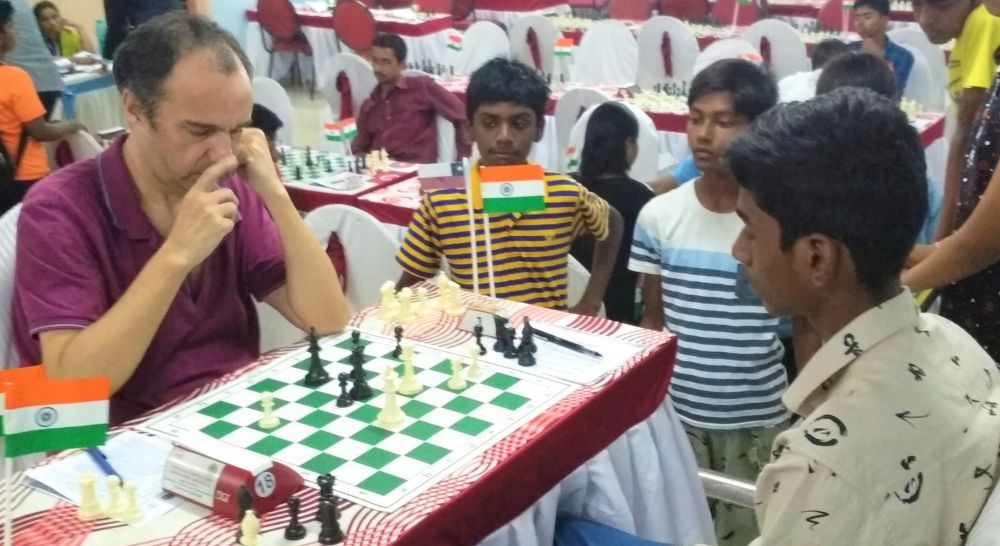 Sa Kannan of Karaikudi drew with Muthaiah in the fifth round, enabling IM Khusenkhojaev, IM Sayantan Das, K Senthil Maran and M Barath Kalyan of TN to shoot into the lead with five points apiece. Senthi Maran shocked Sayantan in the sixth round to emerge sole leader with six wins. GM Vasquez regained his form to outwit Senthil in the seventh round, Khusenkhojaev defeated OT Anil Kumar of Kerala and Manigandan stopped the good run of Sa Kannan to share the lead with 6.5 points each. 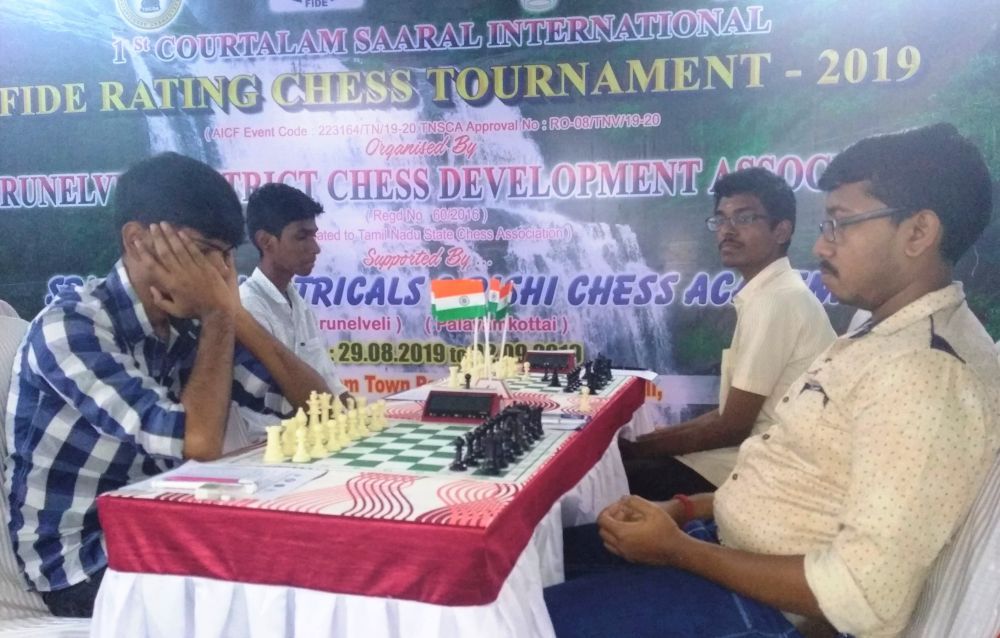 IM Sayantan Das was shocked by Senthil Maran of Tamil Nadu in the sixth round | Photo: R Anantharam

Vasquez and Khusenkhojaev had a quick draw and Manigandan too drew with Senthil in the eighth and penultimate round. This helped the IMs Sayantan and Muthaiah to catch up with the overnight leaders by beating Dinesh Kumar and Swaraj Palit of Jharkhand respectively. The final round tale has already been explained.

As mentioned in the preview, the season in Courtalam was very much pleasant and enjoyable. GM Vasquez and IM Khusenkhojaev spent most of their time after the games only at different falls. 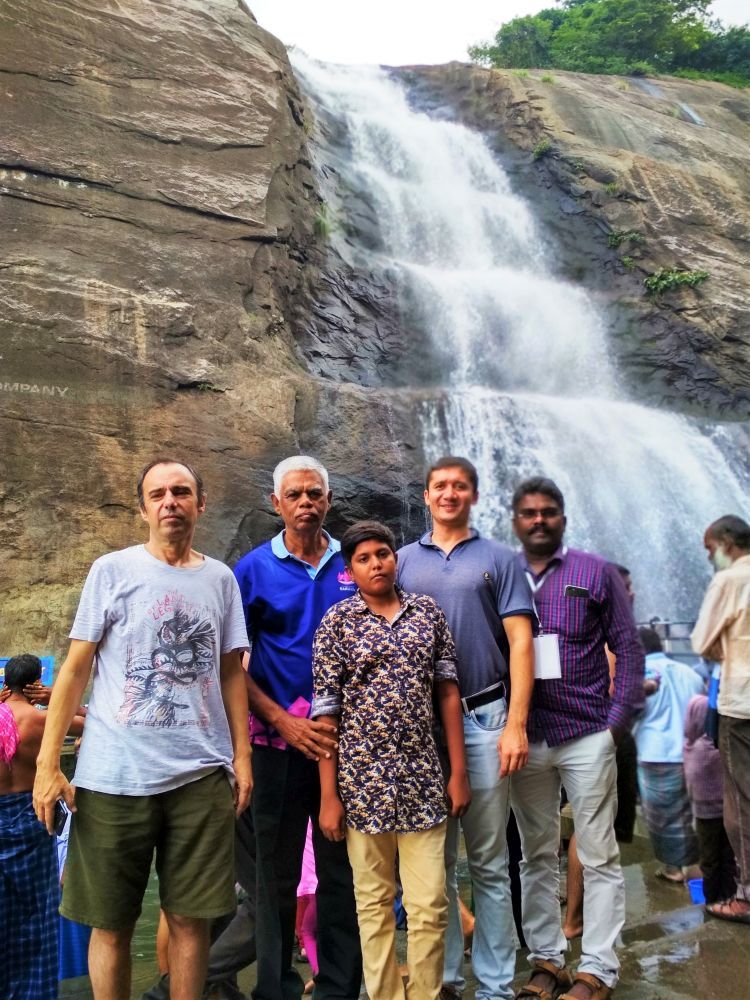 GM Vasquez and IM Khusenkhojaev were stunned by the beauty of the Old Falls | Photo: R Anantharam

Vasquez captured the entire natural scenery in his camera including the unbelievable positions of some monkeys on a very steep small mountain. 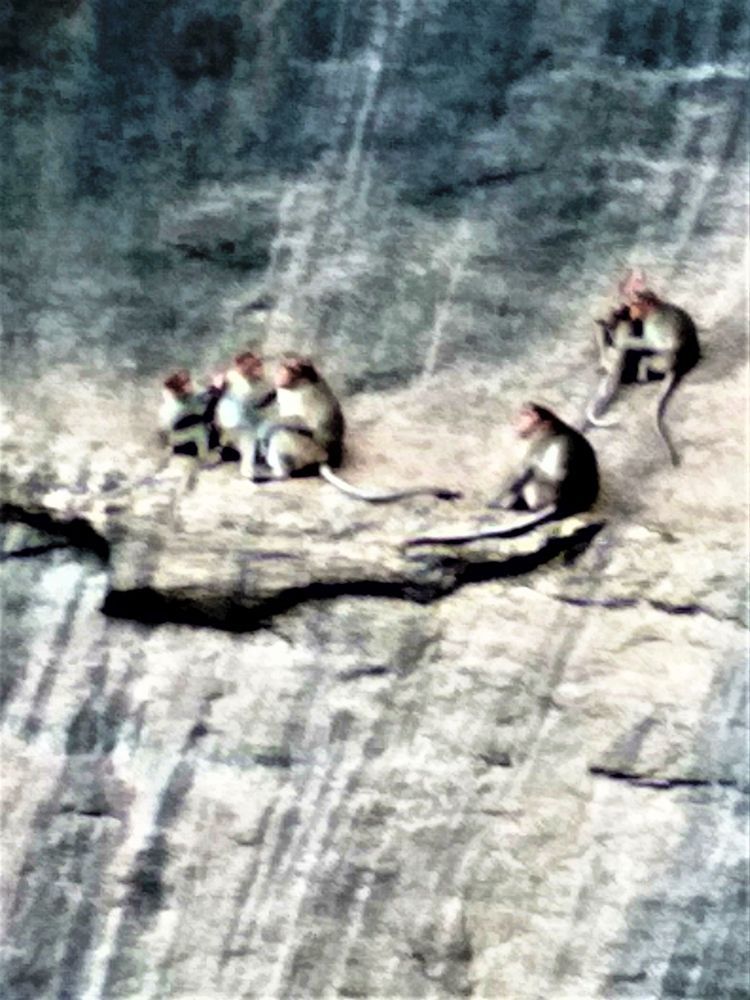 Monkeys have climbed up on a steep rock | Photo: R Anantharam 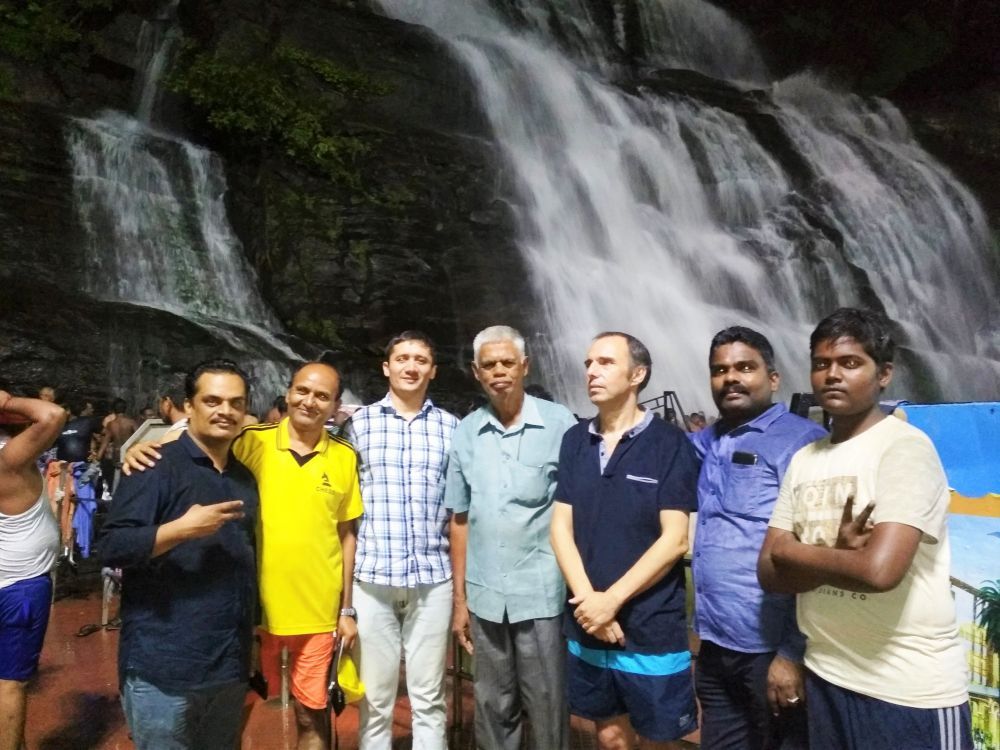 GM Vasquez and IM Khusenkhojaev with the organisers at the majestic Main Falls | Photo: R Anantharam 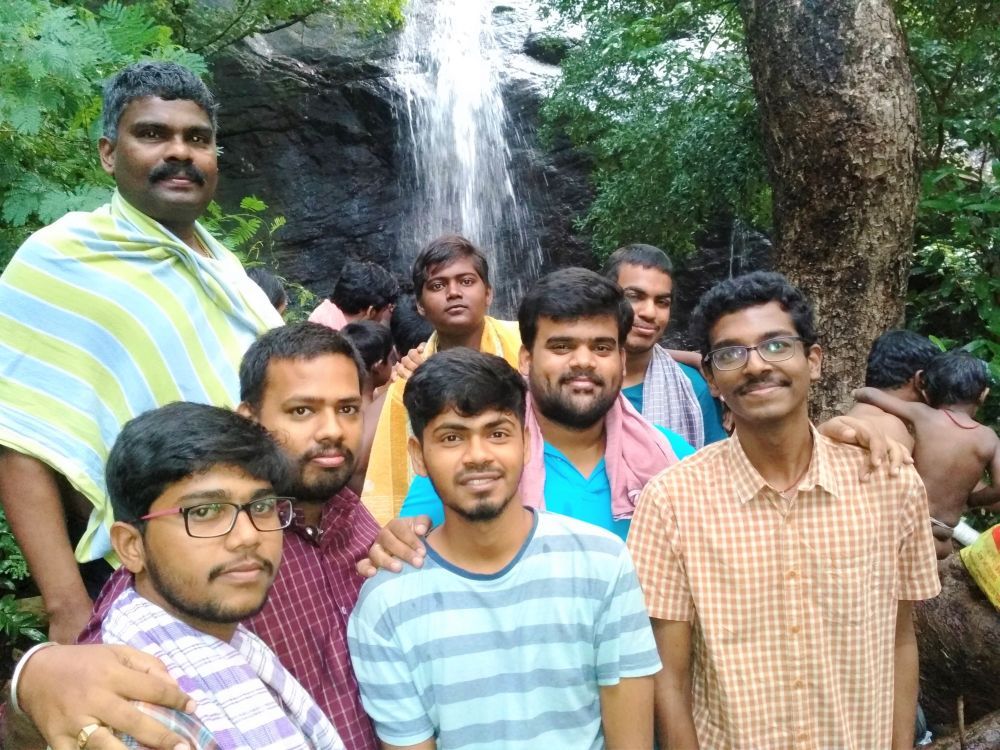 IM Muthaiah AL (right) at the Bear falls where bears used to come in the night | Photo: R Anantharam 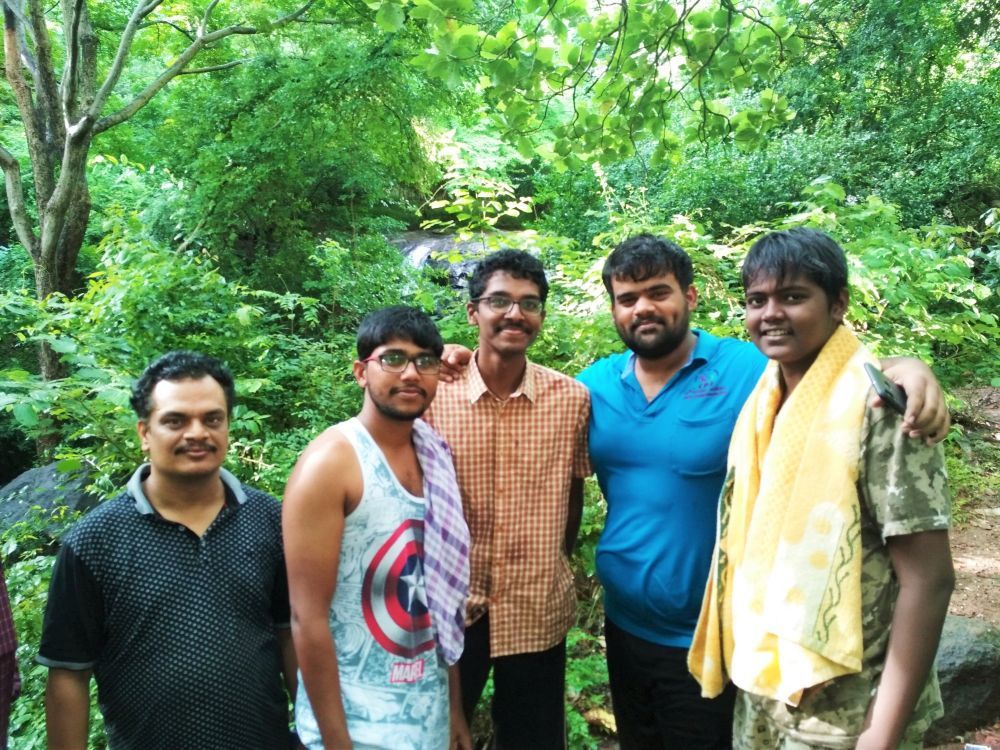 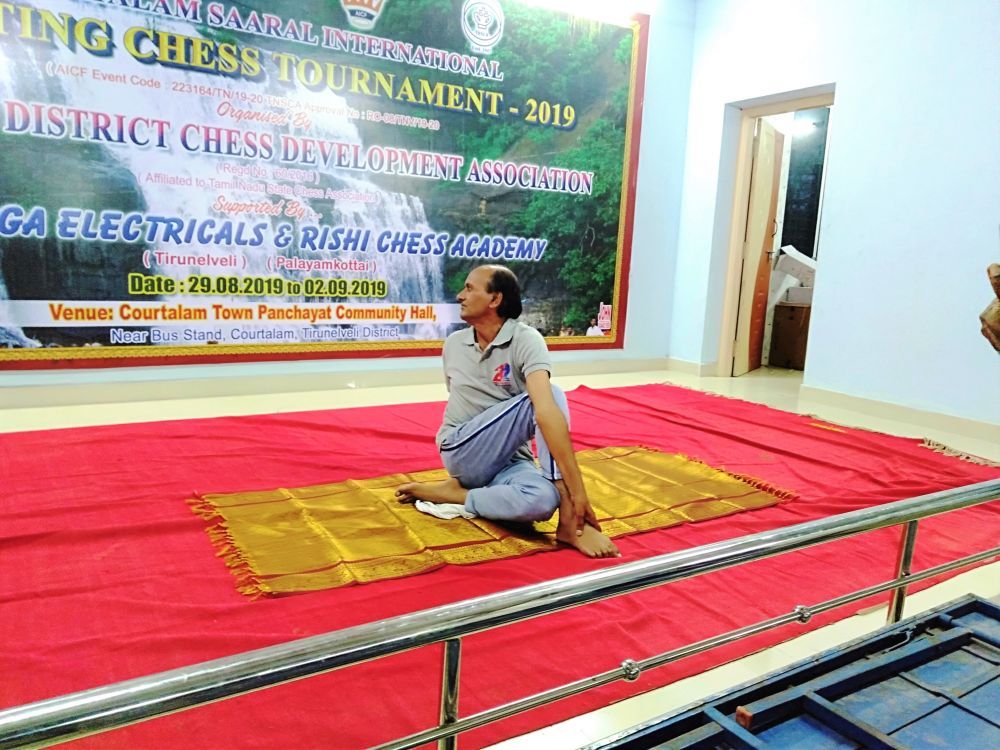 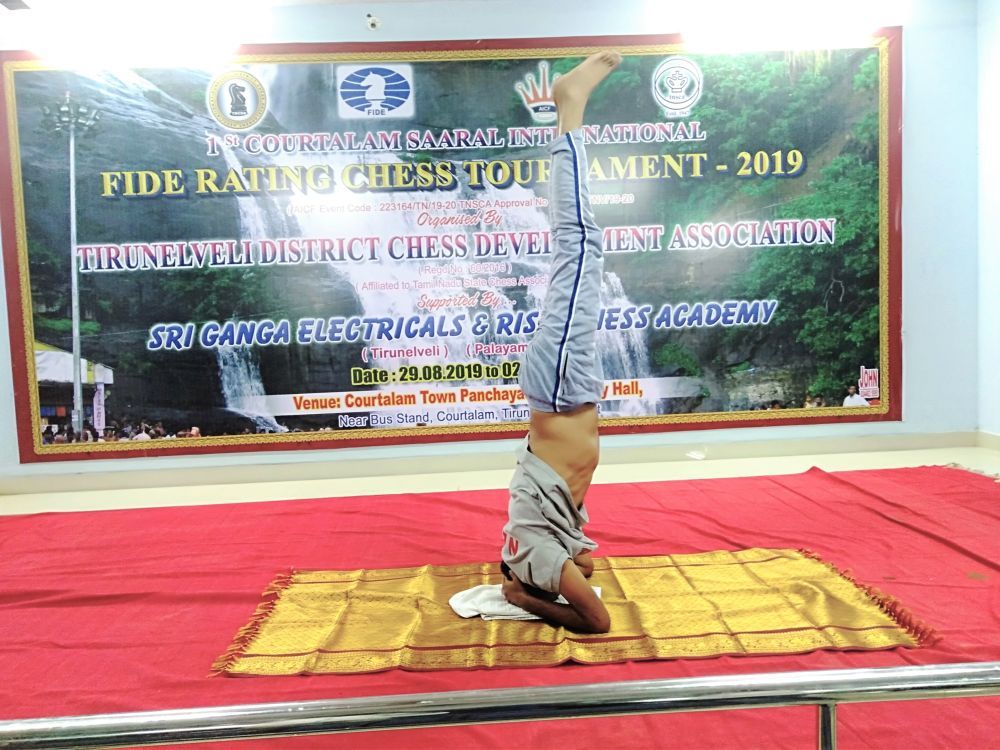 Another yoga exercise by the Yogi | Photo: R Anantharam

Do you feel that you have missed a good chance to visit Courtalam? Don’t worry. Come and play at the Below 1600 rating tournament from 28th to 30th September at the same venue to enjoy and enrich your health. Find more details here.