IM Ramnathan Balasubramaniam wins his third tournament of the year by scoring 7.0/8 and winning 19th Adyar Times Open 2019. Six players finished at the top with a score of 7.0/8, however due to a better tie-break score, Balasubramaniam was declared the winner. CM Rajarishi Karthi and Vignesh B were placed second and third respectively. Total 431 players participated from four different federations Botswana, France, USA and India including various districts across the state of Tamil Nadu along with various states across the country, in this four-day open rating tournament. This is the fourth time Balasubramaniam has won Adyar Times Open and his third tournament victory of the year. Chief Arbiter IA S Paul Arokia Raj sends us the report. Photo: S Paul Arokia Raj

IM Ramnathan Balasubramaniam wins Adyar Times for a record fourth time. His first win was back in 2002, second was in 2005, third reign was a decade later in 2015 and now in 2019 he won it for the fourth time. This was also Balasubramaniam's third tournament win of the year. 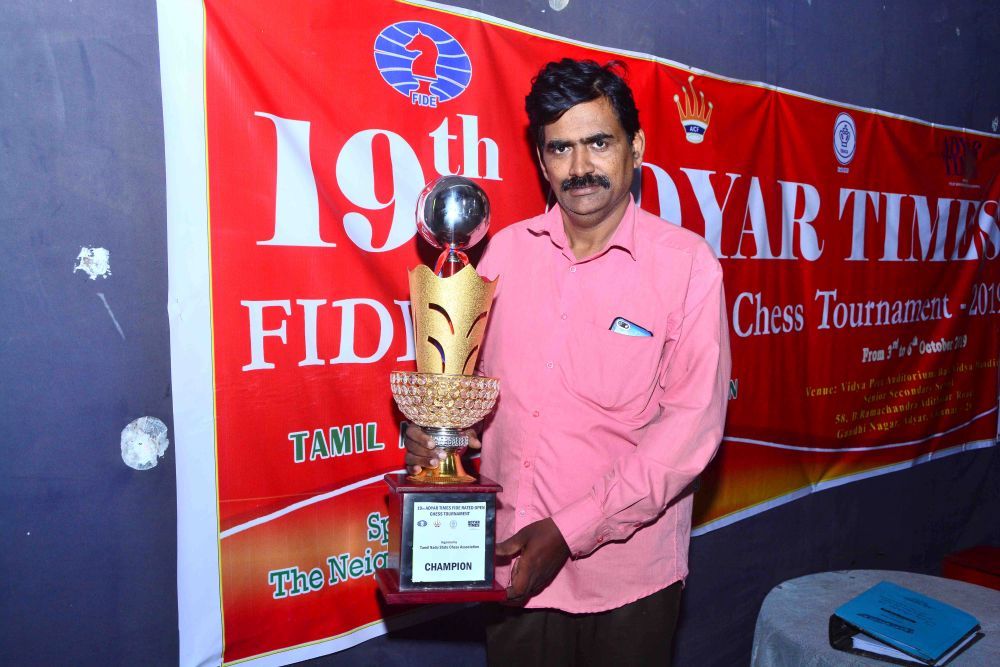 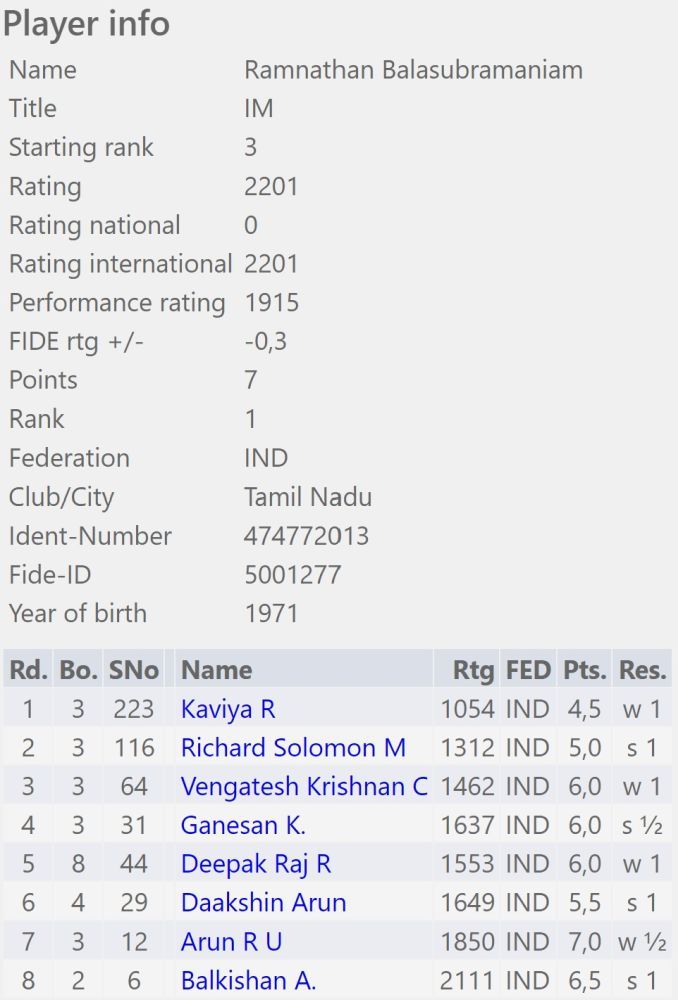 Come month of October every year South Chennai will a have a chess carnival. The occasion is the Adyar Times FIDE rated chess tournament a traditional event organized by the Tamil Nadu State Chess Association. Perhaps this is India’s fourth oldest rating tournament being conducted regularly next only to Sangli open in Sangli, Cusat Open in Kerala, Ernakulam and The Telegraph schools in Kolkata.

Started as an ordinary open tournament with the support of Adyar Times a neighbourhood newspaper of Chennai , this was the brainchild of then TNSCA’s General Secretary and India’s first IM Mr. Manuel Aaron. Last week the tournament has celebrated its 19th birthday.

The event’s inaugural edition was organized at St.John’s matriculation school in Besant Nagar, Chennai way back in the year 2001. Curiously the school was just opposite to the legend Viswanathan Anand’s home! I enrolled myself as a player in this tournament and even got a prize ahead of stars like GM Harika Dronavalli. Next year onwards Mr.Manuel Aaron assigned me with the role of Chief Arbiter which I am doing consistently for the last 18 years. Names like R Gurusamy Naidu memorial open, Palani, Sri Mappilai Vinayagar open, Madurai (both in Tamil Nadu), Piloo Mody Open (Lucknow), Captain Ranade (Pune) are synonymous with the game of chess in India. But all these events are extinct now due to lack of patronage from the sponsors or from the organizers. On the other hand Adyar Times despite having change of guard from its founder editor Mr. A M Ambrose, I.A.S. (Retd.) to his son Mr. Janakan, the Managing editor the tournament has continuous support from the Adyar Times family. 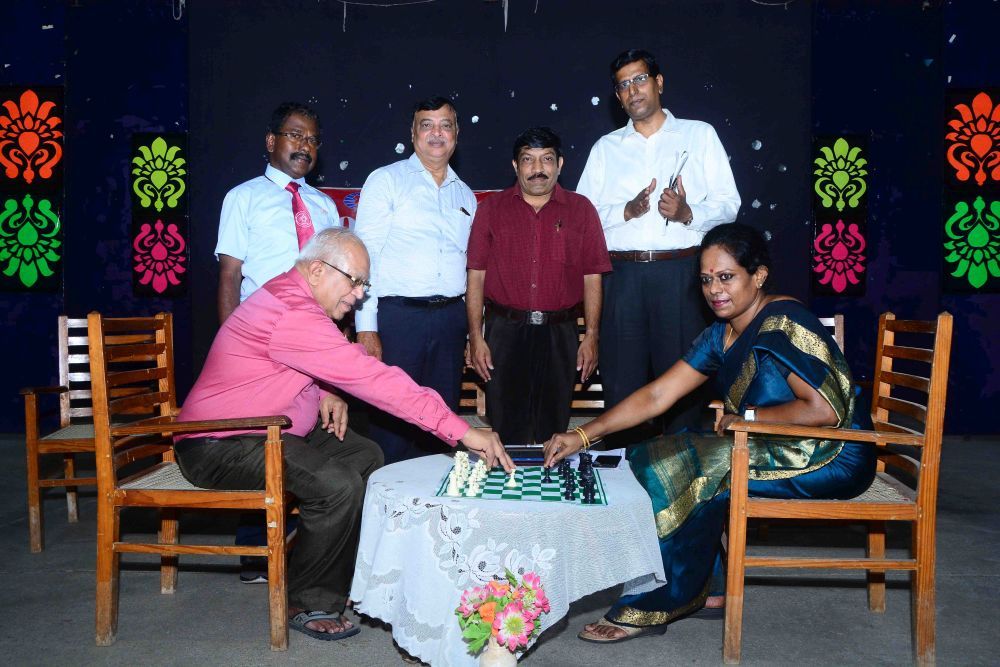 The 19th Adyar Times FIDE rated open chess tournament was formally inaugurated by IM Manuel Aaron and Mrs. Daffenee Rodgers, Vice Principal of Bala Vidya Mandir Senior Secondary School on October 3rd. The venue Bala Vidya Vidya Mandir is a popular CBSE school in Gandhi nagar, South Chennai which offers chess as a part of curriculum. Interestingly five-time World Champion Viswanthan Anand’s son had his early education in this school only. The magnificent Vidya Peet Auditorium and two other spacious halls were the playing halls and this year. 431 players including participants from three more federations namely Botswana, France and United States of America were in the fray. 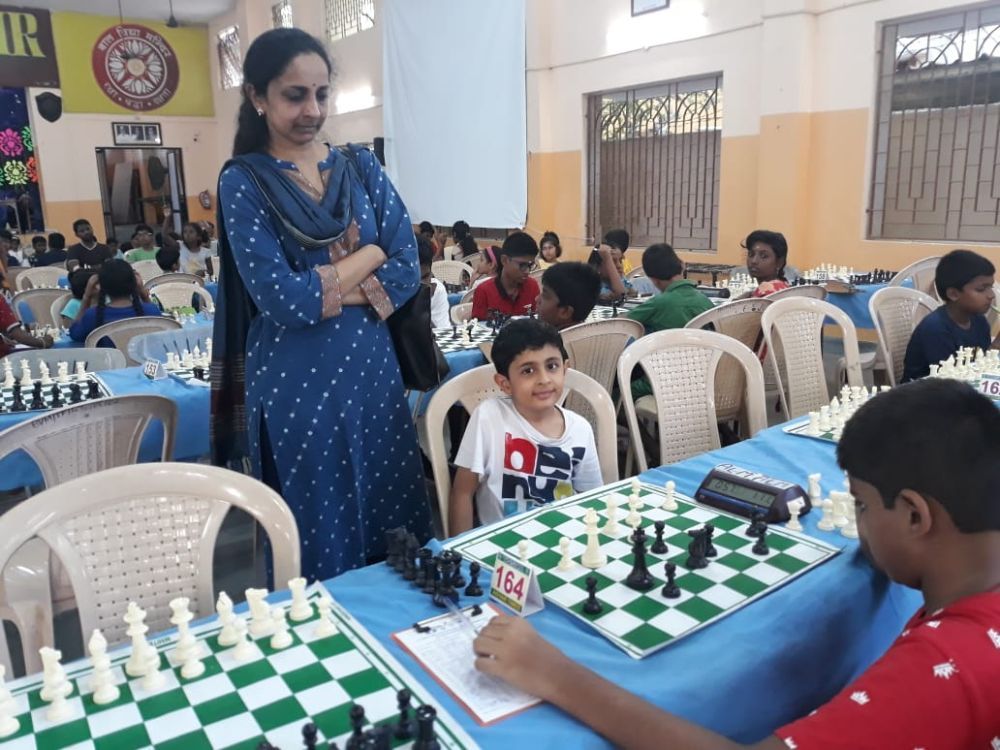 Right from the start of the tournament each round was fought with grit and determination. Only by the end of the sixth round the leadership issue was resolved with the top seed and IM P D S Girinath of Andhra Pradesh emerging as the sole leader with six points. But it was short lived as he went down fighting against A Balkishan of Karnataka after overstepping the time limit in the seventh and the penultimate round. At the same time the second seed Vignesh B accounted for Swaraj Palit of Jharkhand and Rajarishi Karthi also scored a fluent victory over FM Vinoth Kumar.  All the above three winners were leading jointly with 6.5 points each before the start of the final round and it was a virtual photo finish on the cards. On the top table in the final round, while the game between Vignesh B and CM Rajarishi Karthi ended in a draw, IM R Balasubramaniam of Integral Coach Factory, Chennai struck a brilliant victory over A Balkishan to set a target of 7 points. Earlier he had conceded two draws. Soon he was joined by five others to make it a six-way tie for the championship. On account of his higher Buchholz score R Balasubramaniam was adjudged as the 19th Adyar Times FIDE rated open champion. Earlier he has lifted Adyar Times trophy three times in 2002, 2005 and 2015. CM Rajarishi Karthi and Vignesh B finished second and third respectively. 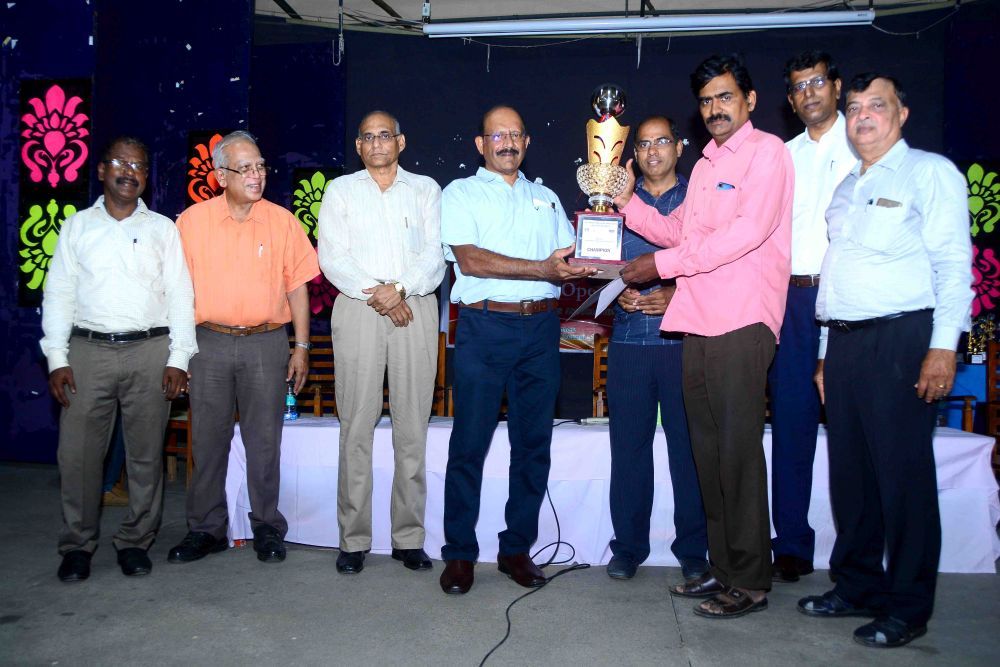 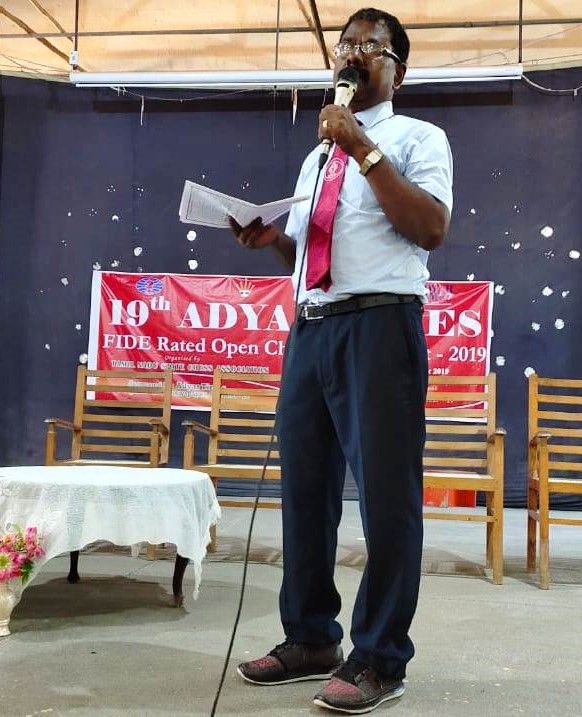 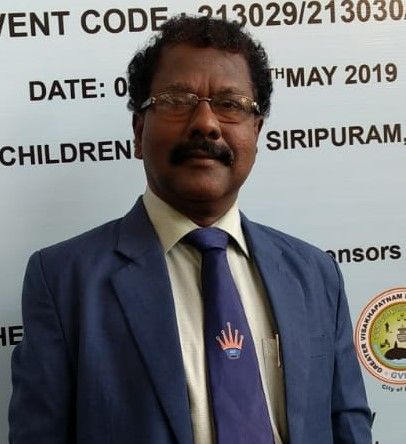 Paul Arokia Raj is a Grade-A International Arbiter. He is one of the most reputed arbiters of India. He has officiated many top events. He is a former National Sub-Junior champion and his career high rating was 2205. He was also the coach of University of Madras for nearly 20 years. Best among his products is GM Sundararajan Kidambi. He is now employed with Chennai Port Trust and he was All India Major Ports Chess Champion for nearly 20 years.