Udaipur is known as the city of lakes. With unparalleled beauty it is one of the most exciting places for tourists all across India and the world. The chess players are in for a treat as the "Chess in Lakecity" are making giant efforts to popularize the sport in their city. The 6th N.L. Pandiyar International FIDE Rating tournament was held from the 22nd to 25th of November 2018. With 353 participants, excellent prize fund and super star India no.3 Vidit Gujrathi visiting the venue, the event became the centre of attraction of chess fans all across the country. IM R. Balasubramaniam of Tamil Nadu won the championship. Atul Dahale, who was one of the participants in the tournament, sends us an elaborate report on his experience of playing in Udaipur.

6th N L Pandiyar International Fide Rating chess tournament was held in the beautiful city of lakes Udaipur from 22nd to 25th November, 2018. This tournament attracted 353 participants from all over India including 4 International masters and 1 Fide master. After 8 rounds of play International Master Ramnathan Balasubramaniam emerged as the champion of the tournament with 7.5/8 score.

Udaipur is a city situated in the state of Rajasthan which is also known as ‘City of Lakes’. There are several beautiful lakes in Udaipur. The city was named after Maharana Udai Singh II who founded it in 1559. After the tournament got over I visited “Fateh Sagar Lake” in the evening and it was really beautiful. 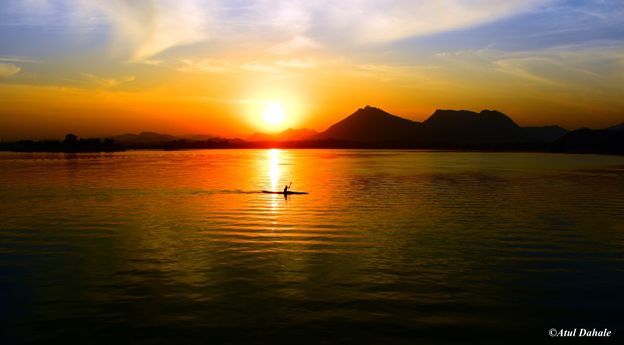 Sunset at Fateh Sagar Lake. It is the second artificial lake of Udaipur. Built in 1678 by Maharana Jai Singh, Fateh Sagar Lake got its name from Maharana Fateh Singh, who later made additions to it.

The tournament attracted 353 participants from different parts of India which included 4 International Masters and one Fide master. IM Chakravarthy Reddy M (2418) was the top seed of the tournament. Apart from him IM Rahul Sangma, IM Ramanathan Balasubramanim and veteran IM Wazeer Ahmad Khan participated in this grand tournament. 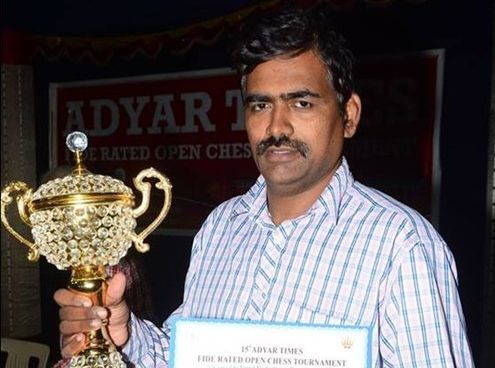 IM Ramanathan Balasubramaniam from Tamil Nadu won the tournament by scoring 7.5/8 points.  Four players scored 7.0/8 points and tied for the second place but Kishan Soni from Odisha was declared runner-up due to better tie-break score. 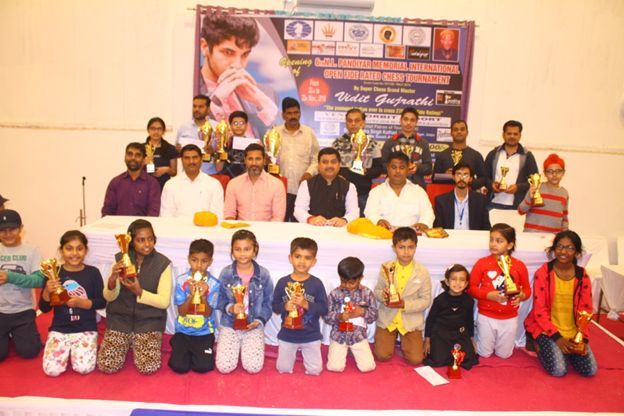 IM Ramanathan Balasubramaniam and other winners with their respective prizes and trophies!

The tournament was organized by “Chess in Lake city” and was praised by everyone because of its efficient organization.  Let’s see what made players and parents to like the organization of this grand festival. 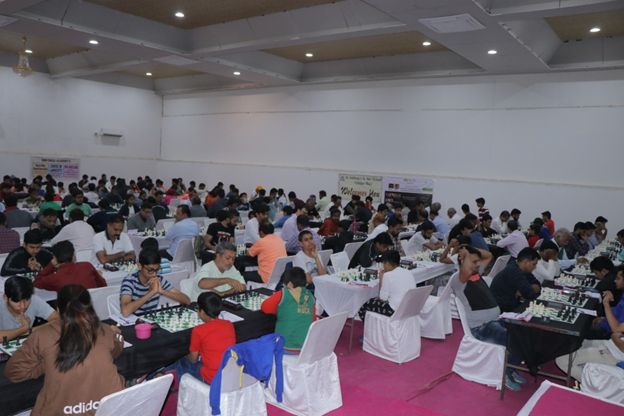 The tournament was held in spacious AC hall. It’s always a good feeling when you have good space to play in.

Delicious food for all players!

Everyday delicious breakfast,lunch, evening tea and dinner was provided to all the players at very less price!It surely shows that the organisers cared about the players and it helped players to save time and money in finding good food during the tournament.

Players and parents enjoying their food!

Very efficient team of arbiters headed by India’s famous IA Gopakumar MS made sure that the tournament was conducted in best manner and without any disputes. 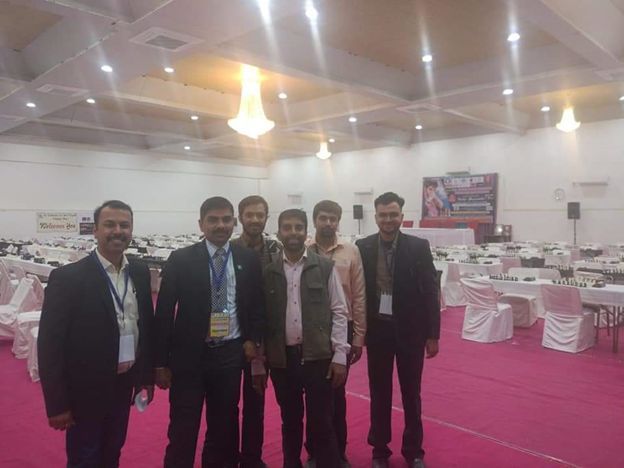 The organisers took good efforts to get media coverage in all the local and national newspapers right from the start of the event. This is something rare to happen in India when chess gets wide publicity in newspapers. Players, organisers  and sponsors get publicity. In the end chess comes to the local population which is a good feeling. 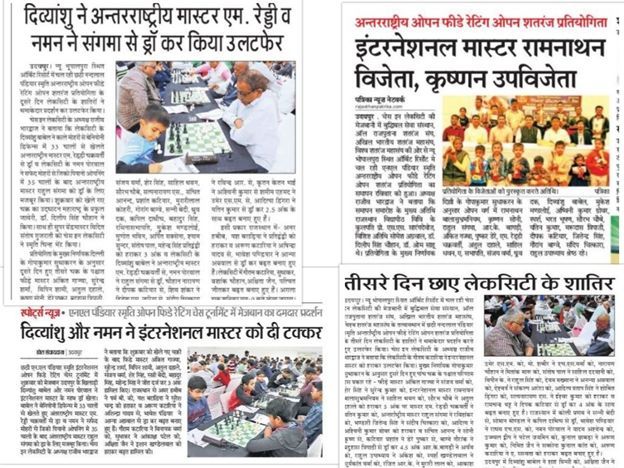 Some of the local and national newspaper cuttings of the tournament.

Words of appreciation from parents and visitors

India’s experienced organizer Praful Zaveri who has staged many successful tournaments in Mumbai including the famous ”IIFL wealth International Open” paid a visit to the tournament venue and praised the organization of this event. When I was discussing with him he said it was a very well organized tournament where the needs of the players were taken care of quite well. Organizing an event with good food and good accommodation and big AC hall shows the quality of the event. 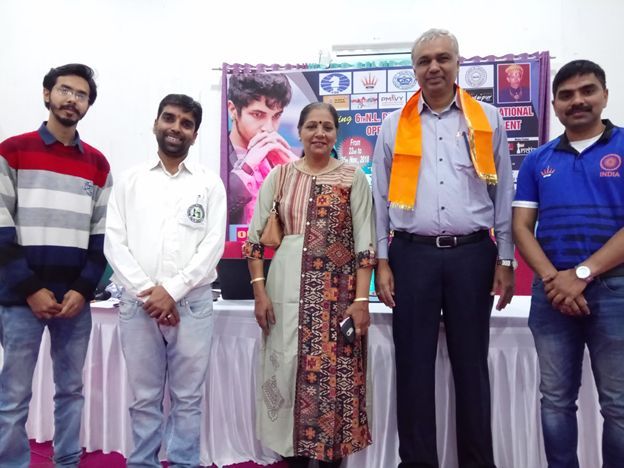 Parents were very happy with the organization. 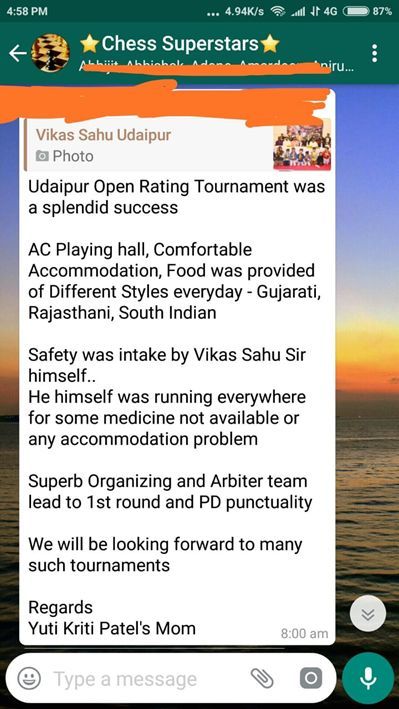 Screenshot of her message about the tournament experience. 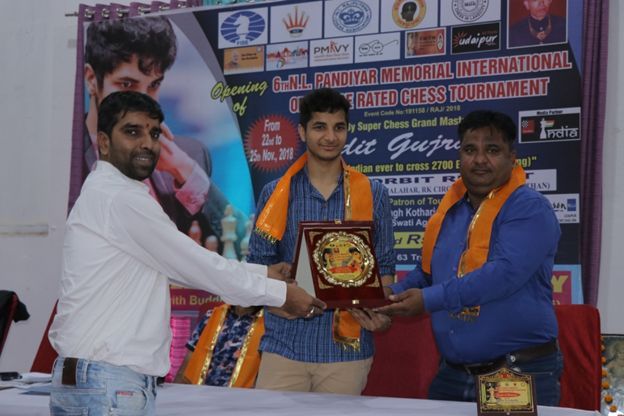 Vidit welcomed and felicitated by the organizers! 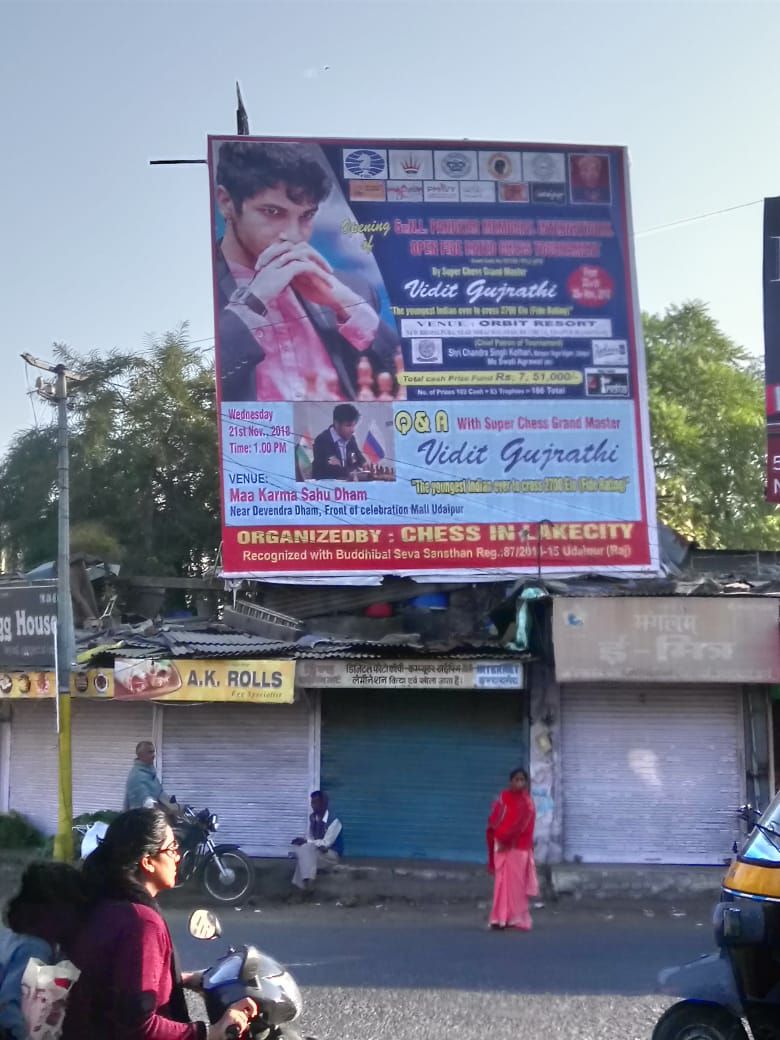 In fact even before he arrived, there were huge hoardings of Vidit placed all across the city

Vidit played a simultaneous exhibition of 50 games against 50 local players and inaugurated the tournament. Personally I loved that the big posters of Vidit that were erected at all prime locations in Udaipur and it felt really nice to see a person whom you know since childhood being treated in such a warm manner. Vidit has worked tremendously hard to achieve this appreciation and he truly deserves this. 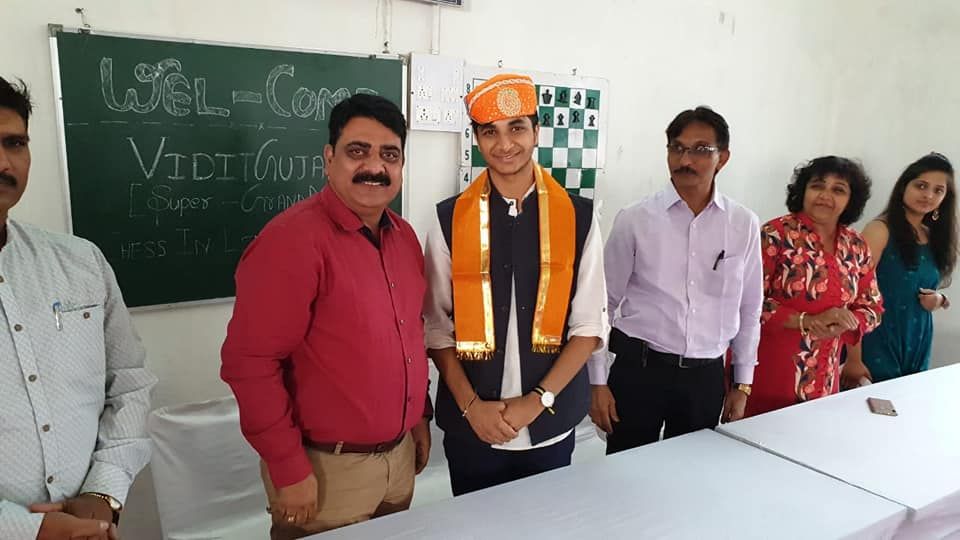 A warm welcome to the prince of Indian chess! 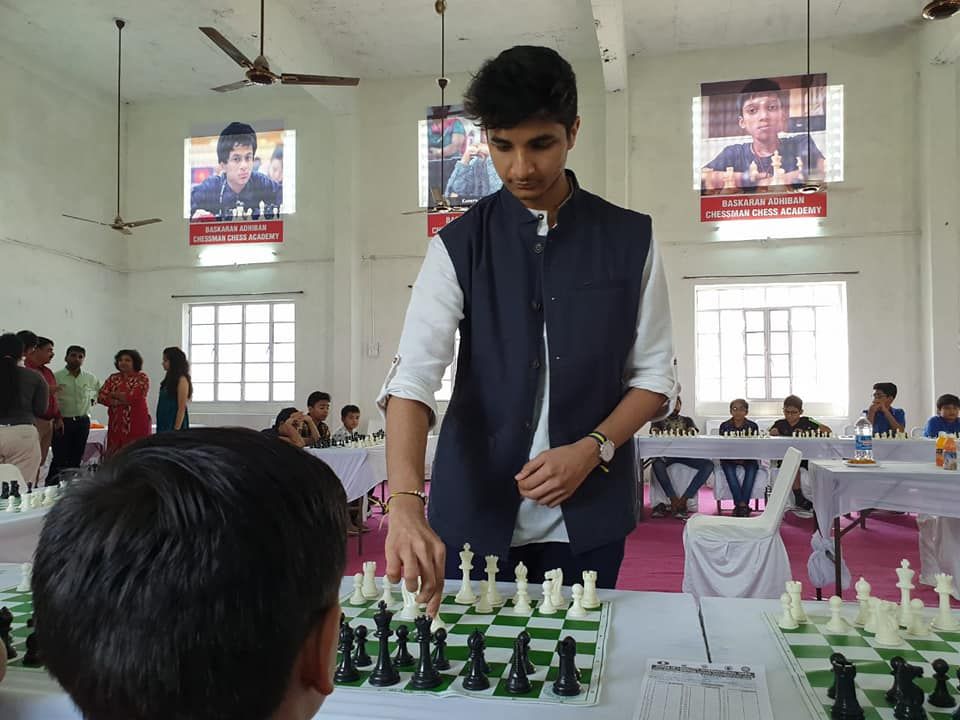 It was not an easy simul, but Vidit managed to score 50 wins out of 50 games

After the tournament me and my friend Ankit Gajwa went on a one day sight-seeing of Udaipur city and we really loved it. We visited all good places in Udaipur like Udaipur City Palace, Pichola lake, Fateh Sagar lake, aquarium and main city also. I must say Udaipur is a beautiful city and the people are very warm and helpful. 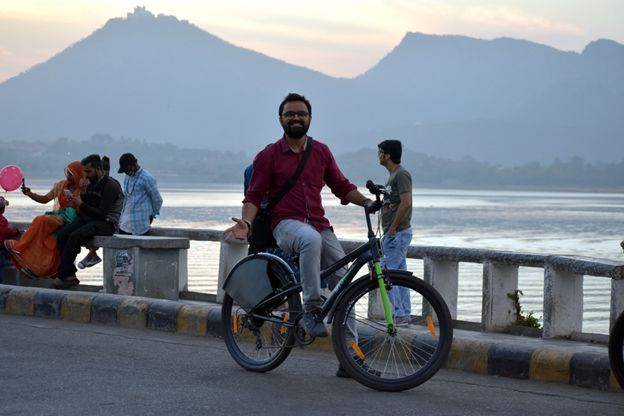 The first thing we did to make our tour easy, affordable and more enjoyable is we took bicycles and rode through all the places on it 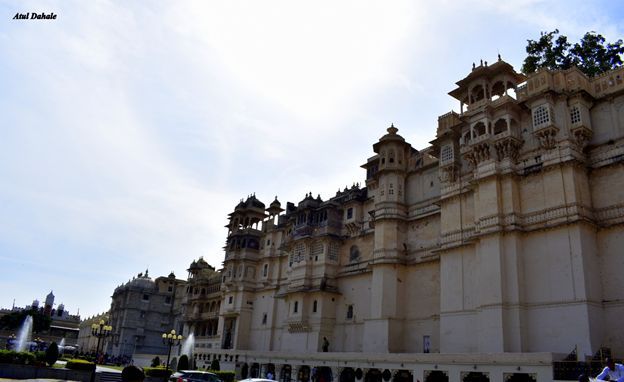 City Palace, Udaipur.It was built over a period of nearly 400 years, with contributions from several rulers of the Mewar dynasty. 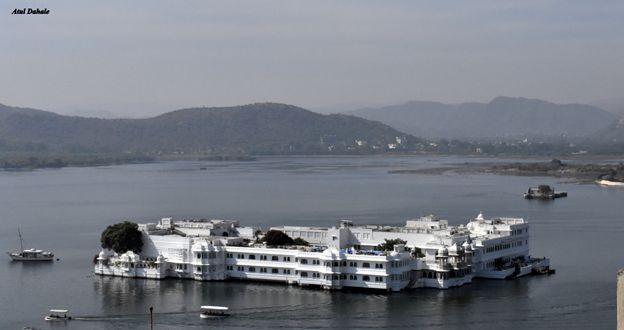 Beautiful Lake Pichola! This used to be the summer home of the kings. Now this property is given to Taj Hotels on lease by the trust. 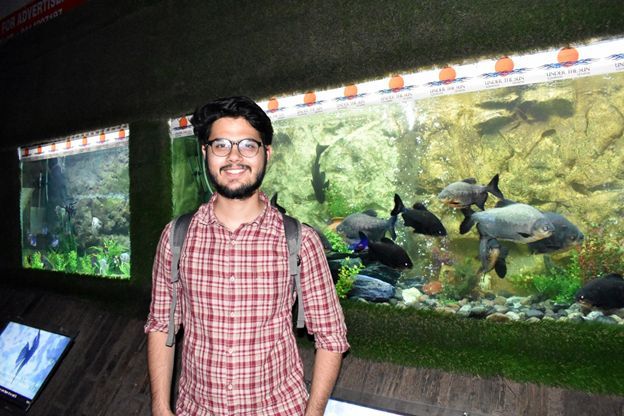 We visited Aquarium too. You will get to see many species of water animals especially fishes here 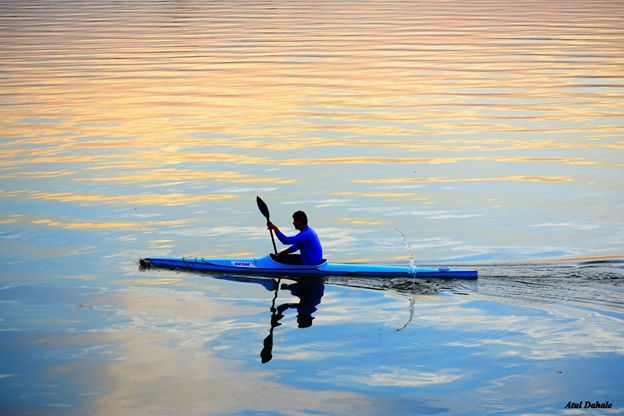 In the end it was a nice feeling to visit Fateh Sagar Lake. There are many food stalls there and you can munch on delicious street food. Here you can see a man Kayaking in blue waters!

It was a wonderfully organized event and I enjoyed my stay there in Udaipur. All credit goes to organizing team of “Chess in Lake City”. I am looking forward to come and play in Udaipur once again soon!

Atul Dahale is one of the first internationally FIDE rated players from Parbhani. He loves the game of chess and enjoys the fact that he can travel to different places, meet people and make new friends thanks to chess. He has a rating of 2069.