IM Arjun Kalyan and untitled Pranav V surprised everyone by winning Velammal Rapid and Blitz with a score of 8.0/9 and 8.0/8 respectively. Starting out as the tenth seed Arjun remained unbeaten and scored upset victories of GM Karthikeyan Murali and GM Vishnu Prasanna. IM Rathanvel VS also scored 8.0/9, however due to a better tie-break score Arjun clinched the championship. Karthikeyan finished at third place by scoring 7.5/9 in the Rapid event. 13-year-old Pranav scored eight straight victories in Blitz to become champion. He beat GM Vishnu Prasanna and GM Deepan Chakkravarthy on his path to victory. Untitled Peter Anand of Pondicherry claimed sole second position with a score of 7.5/9. IM S Nitin was the only titled player to finish in top 5 in Blitz. Photo: IA R Anantharam 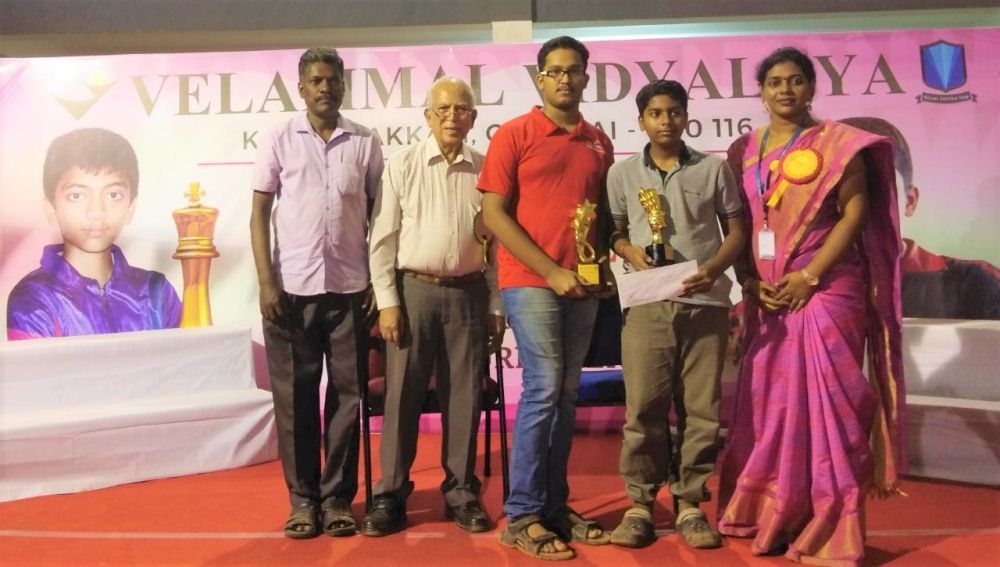 In the fourth round of the Rapid event, top seeded Aravindh Chithambaram and third seeded Vishnu Prasanna were held to draws by their young opponents Rajarishi Karthi and Alan Divyaraj, both from Tamil Nadu.

IM P Shyaamnikhil of ICF had to taste the defeat at the hands of WIM M Mahalakshmi after the former blundered a checkmate in one move. 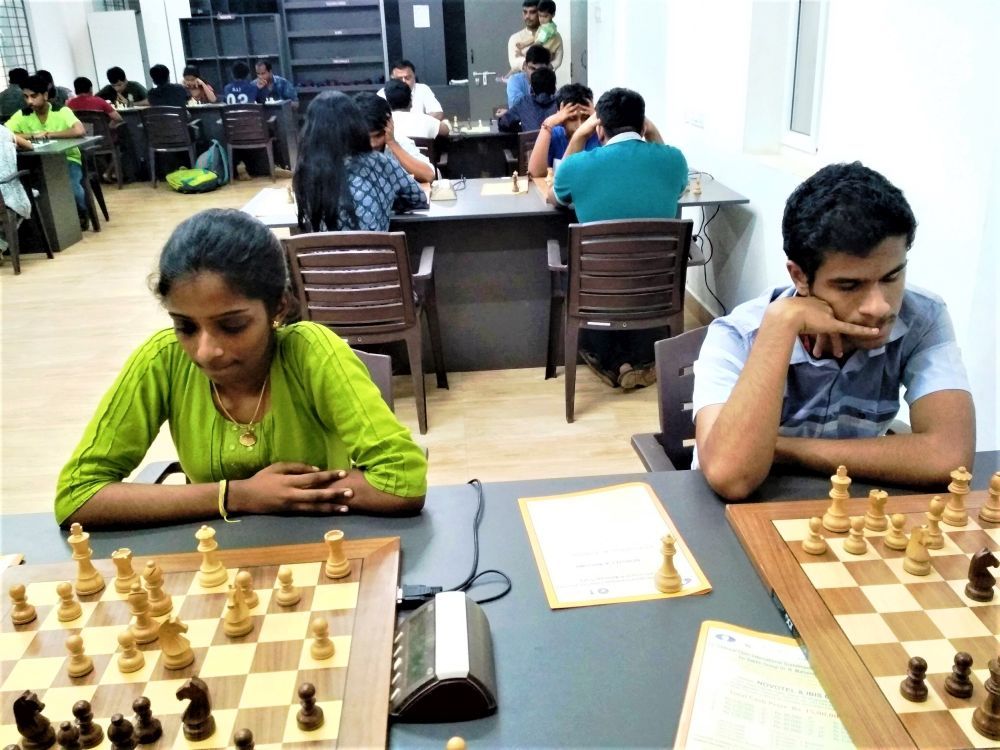 WGM R Vaishali and GM Karthikeyan Murali were among the leaders with five points from five rounds of the Rapid event | Photo: R Anantharam

Arjun Kalyan shocked the two-times national champion Karthikeyan Murali, to emerge the only player to have scored six points after six rounds. Thereafter, he never looked back to win the tournament comfortably.

Vishnu joined Arjun at the top by beating Nikhil Magizhnan in the seventh round. The tussle between Arjun and Vishnu in the eighth round ended in favour of the former, providing him a cushion of half point lead over five other players – Shyaamnikhil, Karthikeyan, Kunal, Rathnavel and IM A Ra Harikrishnan.

Arjun raised his tally to eight points with a safe draw with Shyaamnikhil and Rathanvel defeated ARa Harikrishnan to level the score with Arjun. With a better tiebreak score, Arjun won the rapid tournament. 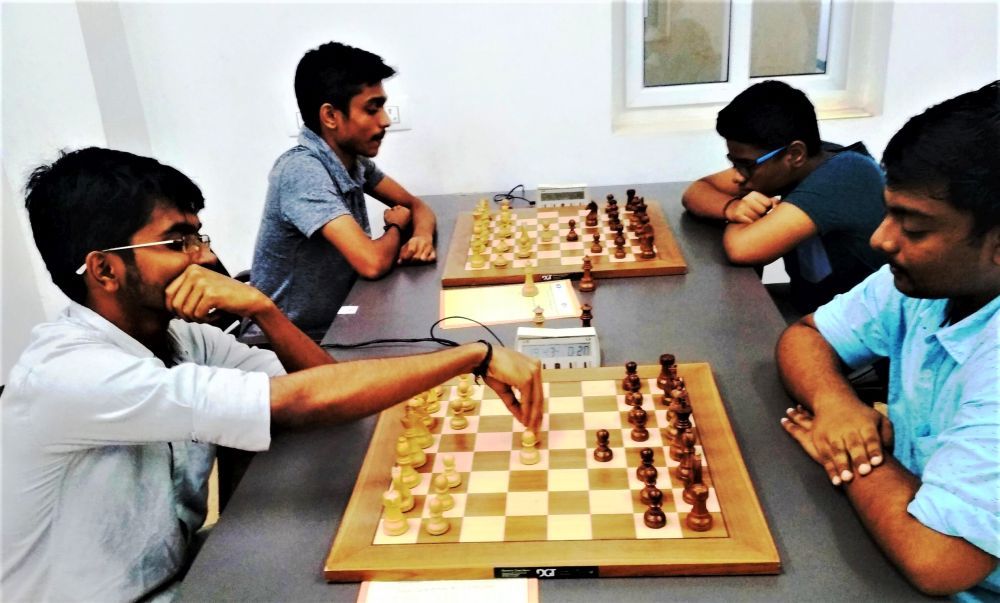 VS Rathanvel, waiting for his IM title to be approved, defeated IM A Ra Harikrishnan in the final round to finish runner up | Photo: R Anantharam

Five players scored 7.5 points each. While Karthikeyan Murali secured the third place,  GM Vishnu Prasanna was placed behind him at fourth. 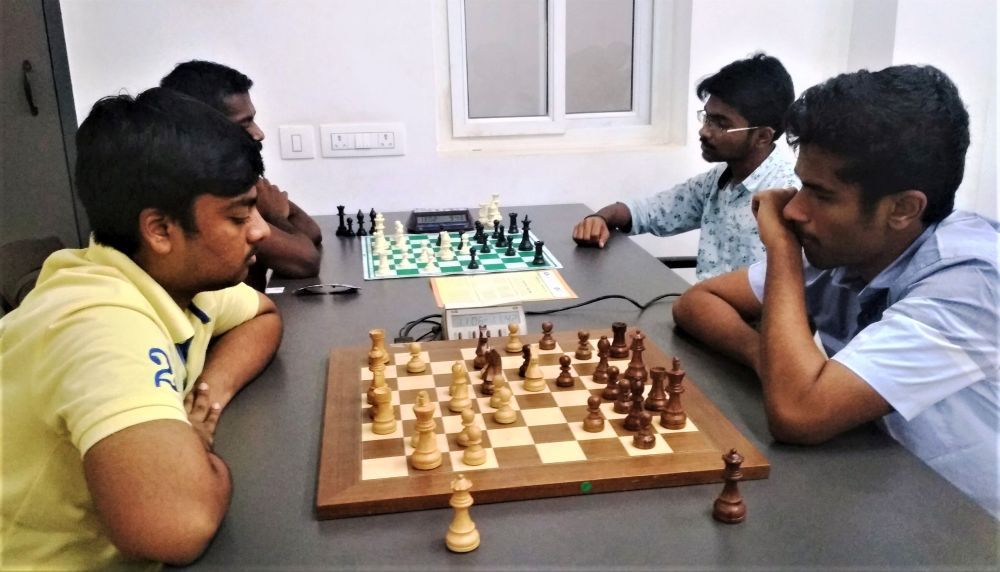 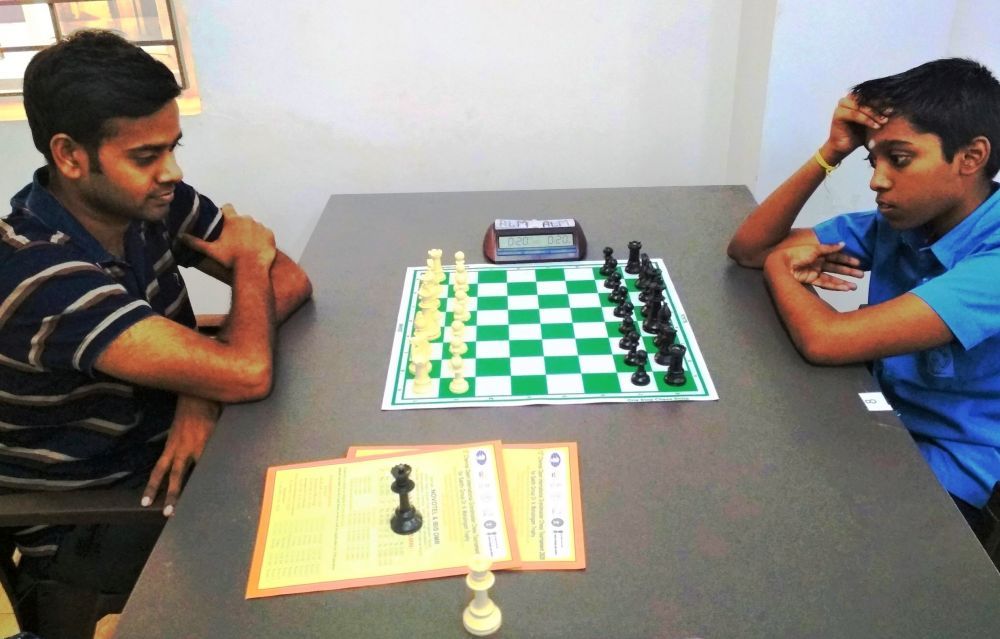 World Youth under-18 champion R Praggnanandhaa and Aravindh Chithambaram could not figure in the top ten list. 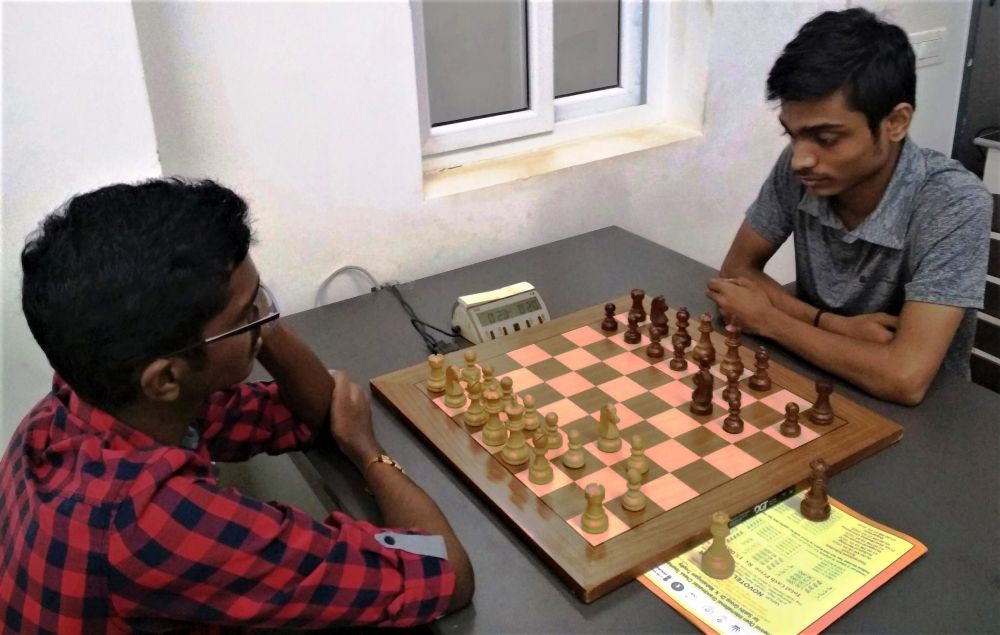 Out of the fifteen titled players including GMs, IMs and WGMs, only one titled player – IM S Nitin could figure in the top five ranks of the Blitz prize list.

It was all the way V Pranav from the beginning. He recorded eight consecutive wins in eight rounds, toppling many higher rated players on the way. The 2232 rated player humbled the grandmasters Vishnu and Deepan, besides scalping IM S Nitin and IM TS Ravi in the last round. 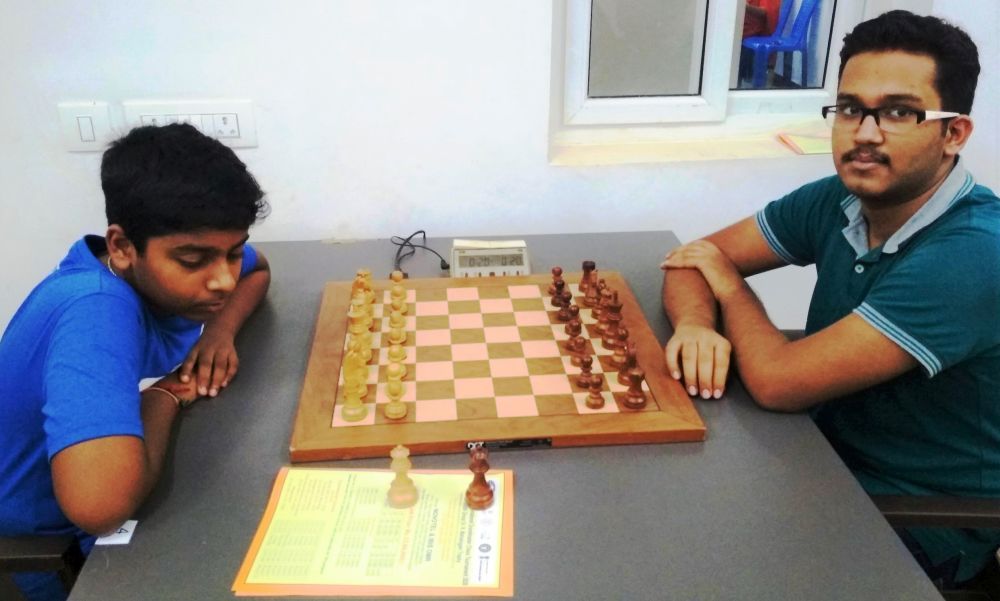 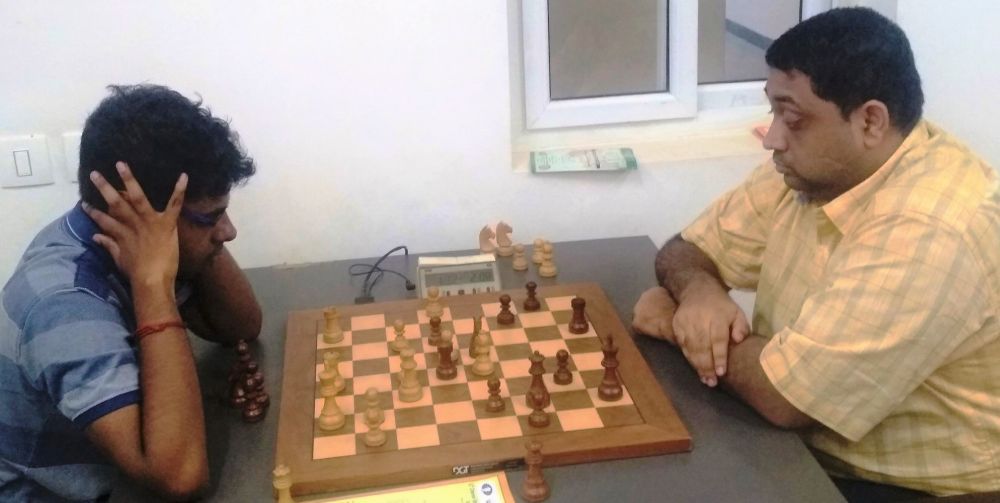 Peter Anand beat Laxman in the final round and finished second in Blitz | Photo: R Anantharam 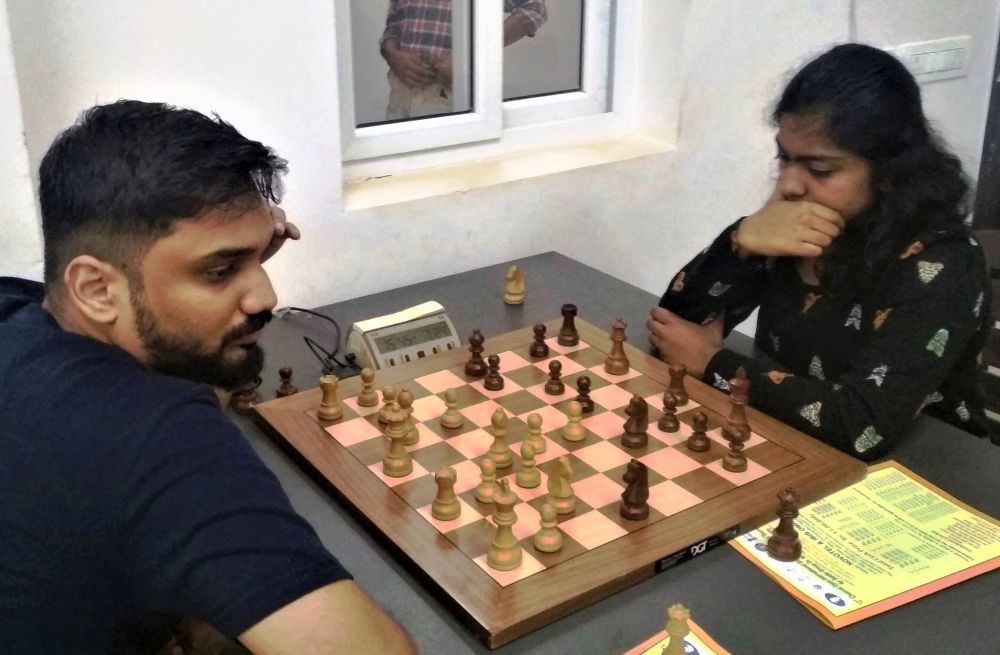 The highest rated player of the Blitz event R Praggnanandhaa (2604) had two heart breaking losses to lower rated players to finish at a distance. 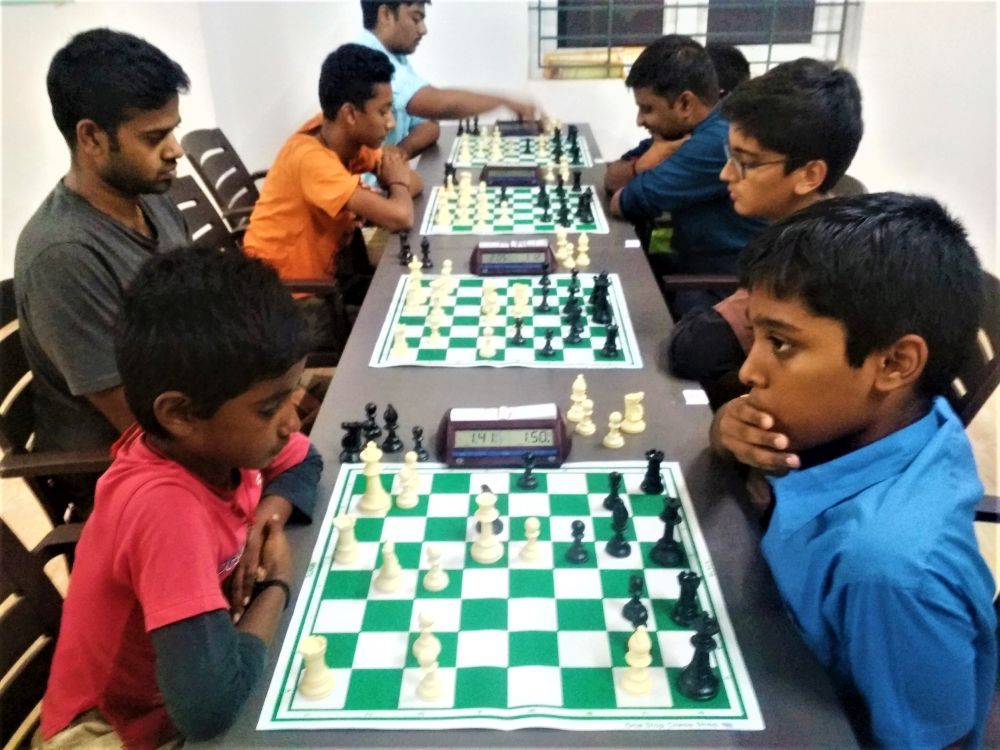 Reigning National under-9 open champion Aakash G held Praggnanandhaa to a draw in the final round of Blitz | Photo: R Anantharam

The surprise runner up - A Peter Anand of Pondicherry had only one draw with Aravindh in the seventh round and held his nerves to beat the blitz king RR Laxman to score 7.5 points. IM S Nitin of Southern Railway had suffered only one loss to Pranav and his final round win over Aravindh helped him to clinch the third place.

The Rapid event had a prize money of ₹200000 with a first prize of ₹35000 and the Blitz tournament offered a prize money of ₹101000 rupees. Mr. P Stephen Balasamy, General Secretary of Tamil Nadu State Chess Association inaugurated the tournament and Mr. Manuel Aaron, the first International Master from India and the first Arjuna Awardee in the game of chess distributed the prizes on the final day. The tournament was well organised by the Rooks & Knights Chess Academy, ably supported the management, staff and students of Velammal Vidyalaya. 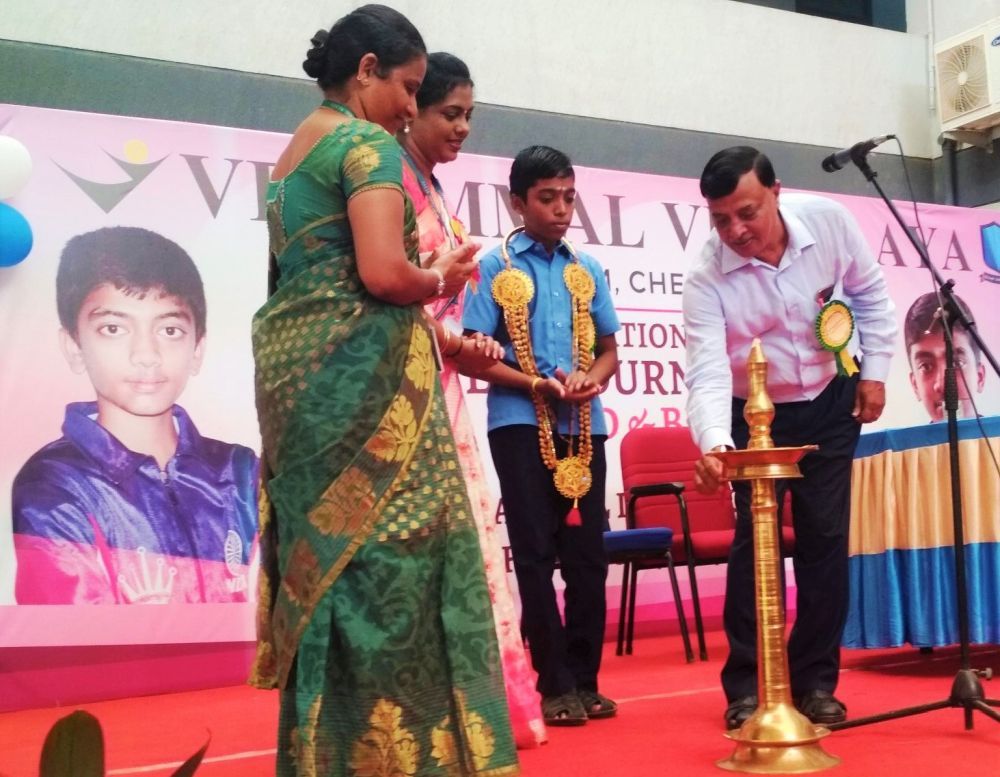 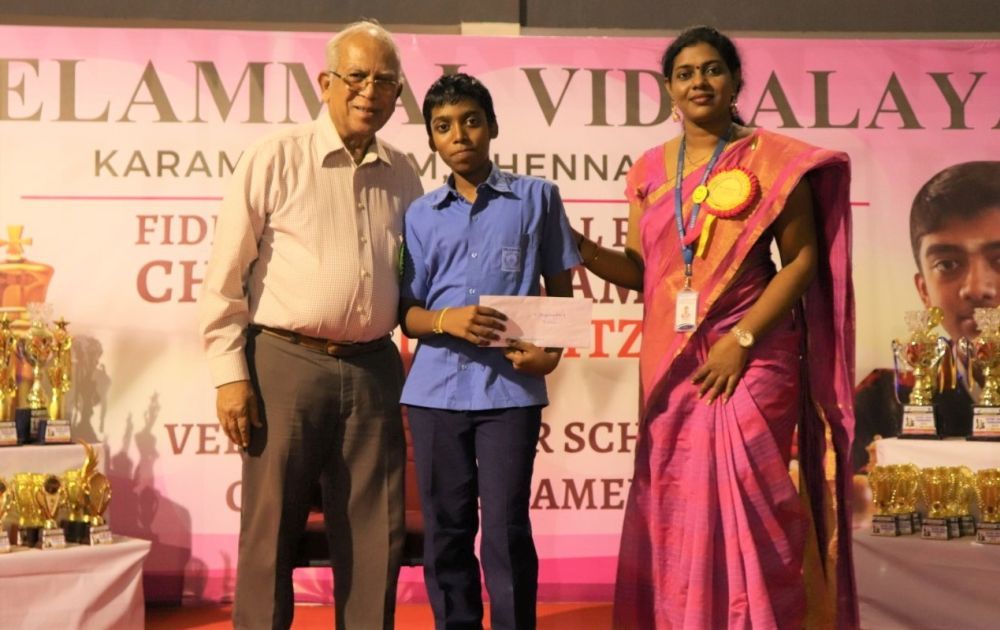 How is it possible to congregate such a galaxy of grandmasters and several international masters in a rating tournament. Apart from the fact that the event was held at Chennai, their home town, many of these top stars are from the Velammal Group of Institutions. The only way to pay respect to their Alma Mater is participating in the institution’s tournament. Velammal Group of Institutions' contribution to chess in Tamil Nadu is immense. Most of the current grandmasters and international masters of Tamil Nadu are either studying there or its alumni. The credit for such a big support to chess goes to its Chairman Mr. MV Muthuramlingam and his son and the CEO of the school Mr. MVM  Velmohan. 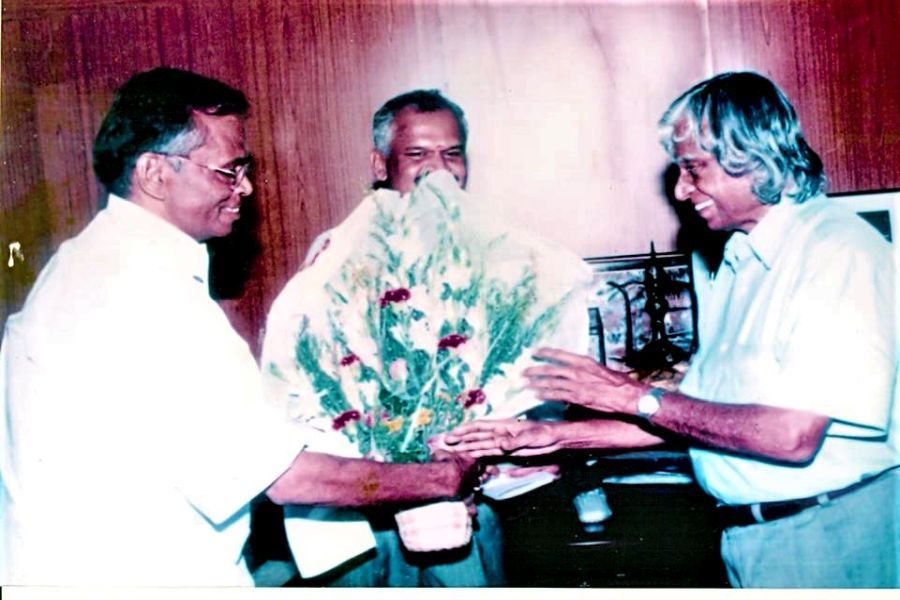 Mr. Muthuramalingam, Chairman of the Velammal Schools with the former President of India APJ Abdul Kalam