It seems like reaching an equal endgame against Harikrishna is a recipe for disaster! The India no.2 has been playing some phenomenal endgames since the Shenzhen Masters. Hari continued his form at the Tepe Sigeman & Co. and is now on 3.0/4 after his rounds three and four victory against Nils Grandelius and Nihal Sarin. How does Harikrishna do it? How is he able to beat such strong opponents from relatively equal endgame positions? IM Sagar Shah has been following Hari's games quite closely and in this article he tries to reveal the key elements of Harikrishna's successful endgame play. We also have a very beautiful endgame lesson from a game played in 1984 between Kovacevic and Ribli. Don't miss this instructive article.

We have been observing this from Shenzhen - Harikrishna gets in to equalish endgames and then beats his opponents. How does he do that? Well, let's see how.

Grandelius vs Harikrishna, Round 3 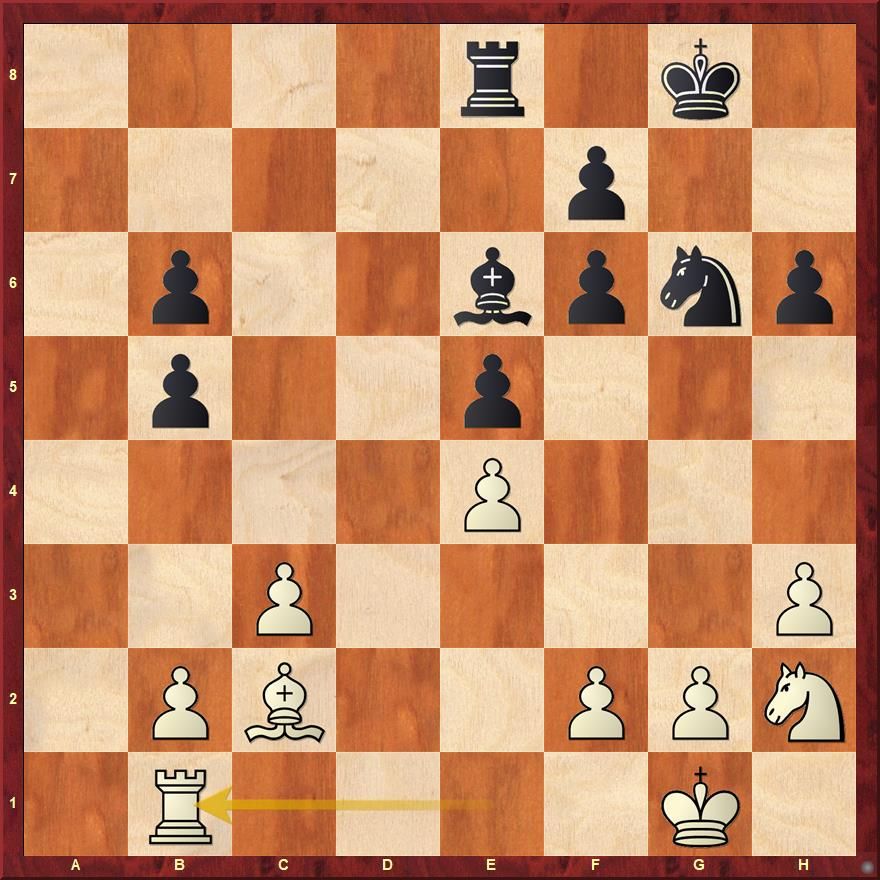 White has just recaptured a piece on b1. How should Black continue?

It is quite easy to continue with a routine move like Rd8 or Ra8. But what Harikrishna does in such positions is puts all his energy and finds resources which do not change the assessment of the position, but forces the opponent to make certain uncomfortable decisions. He keeps doing this for several moves and somehow he is able to do this much better than his opponents. At some point Hari's adversaries start to lose their stamina and Harikrishna is all over them! So what did he plays against Grandelius in the above position? 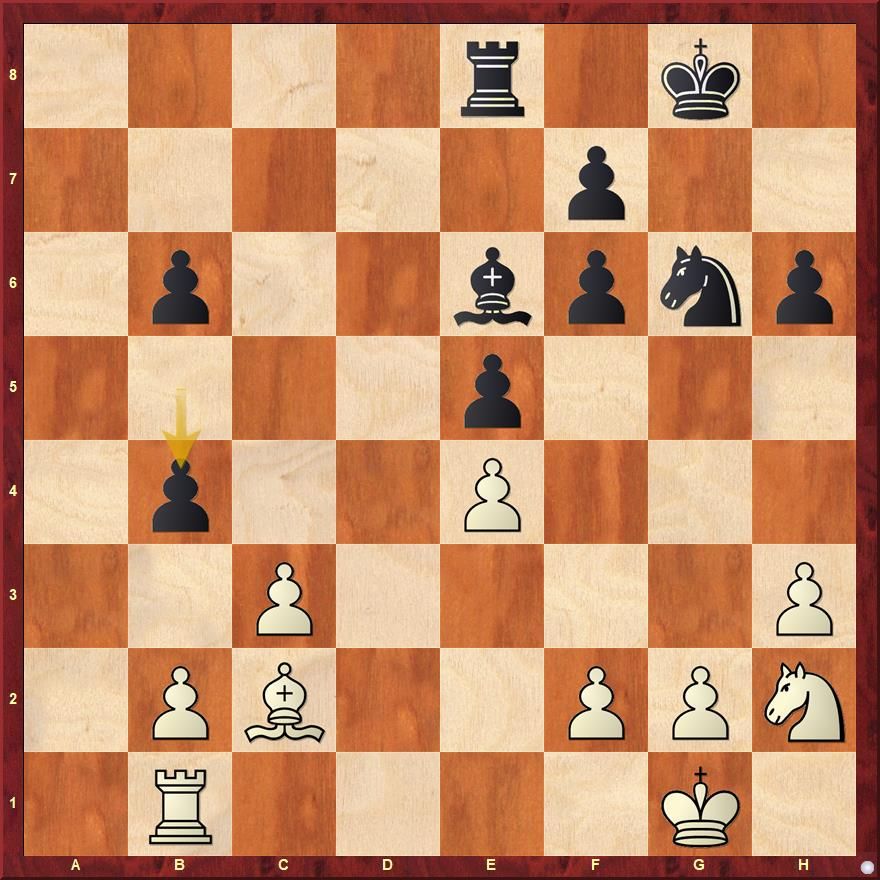 ...b4! an excellent move, which forces White to make a decision. Either he can take the pawn on b4 or let Black push forward with b3. And yes, the black pawn coming to b3 is not fatal, but it is uncomfortable to give your opponent a lot of space and so Grandelius decided to take cxb4. Now Hari replied with Rc8 attacking the bishop. The rook is also threatening to come to c4 and hence, White goes Bd3, but after Rd8, you are not just threatening the bishop, but after it moves, Rd4 is going to give you back the pawn. 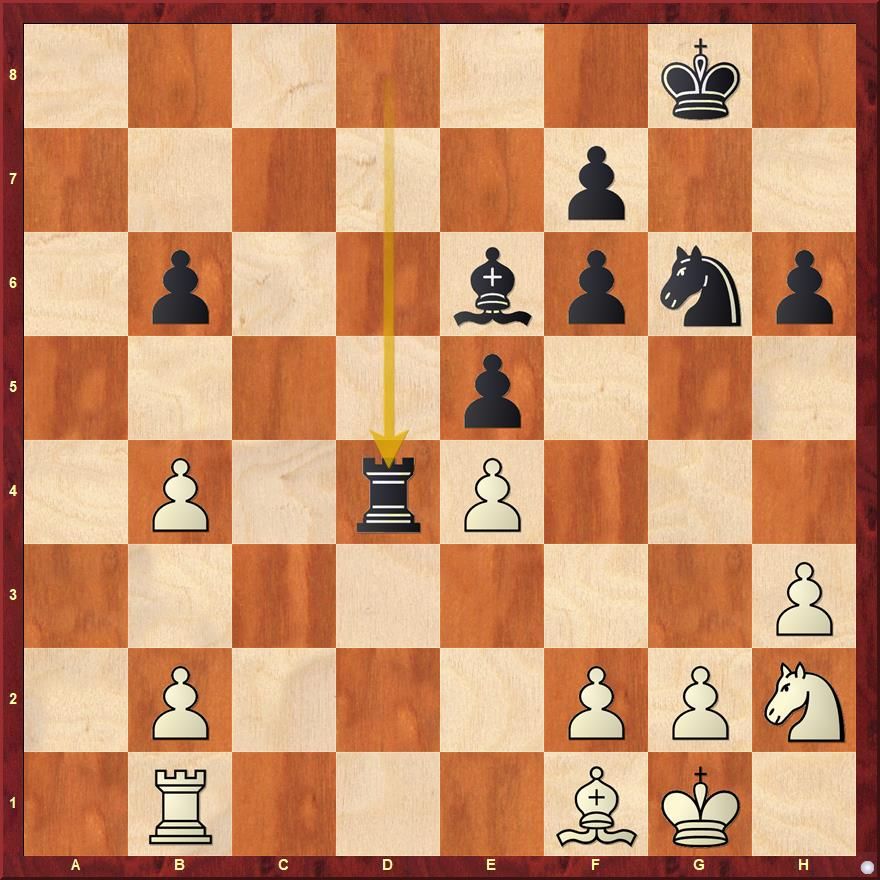 The rook swoops into the d4 square and once again White has to decide. Should he give up the b4 pawn or the one on e4. He played b5, but after Rxe4, Black's kingside majority is more potent than White's doubled b-pawns. 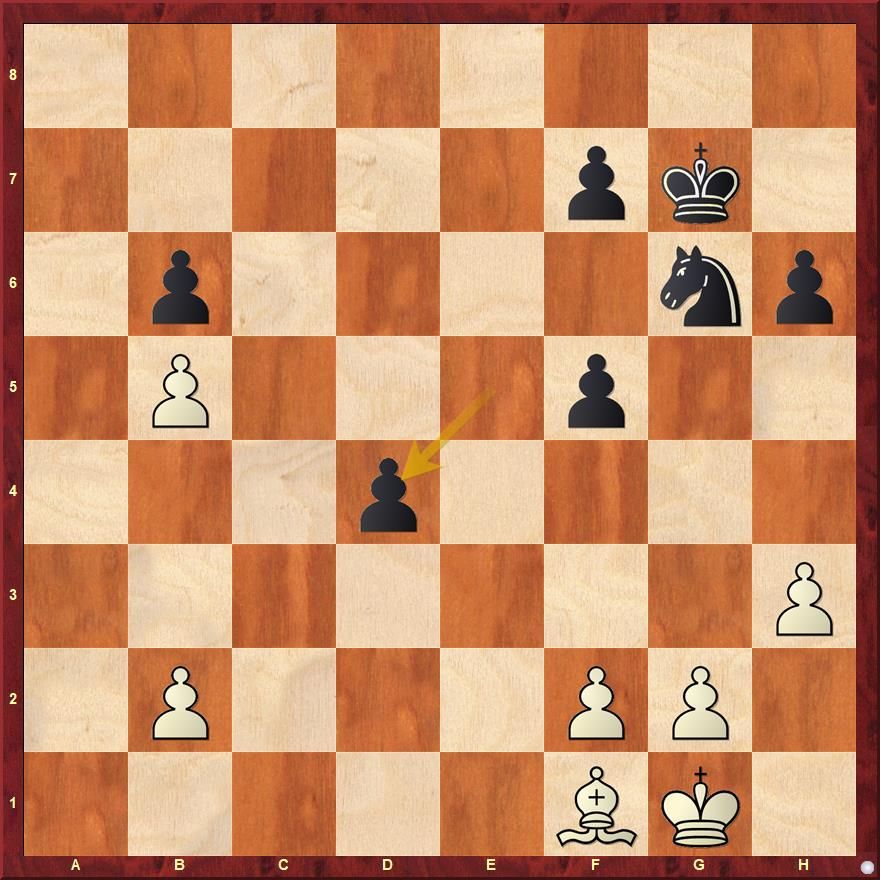 After a few moves we reach this position where Black has a passed d-pawn and a king who is reaching e5. Harikrishna's endgame technique was simply immaculate 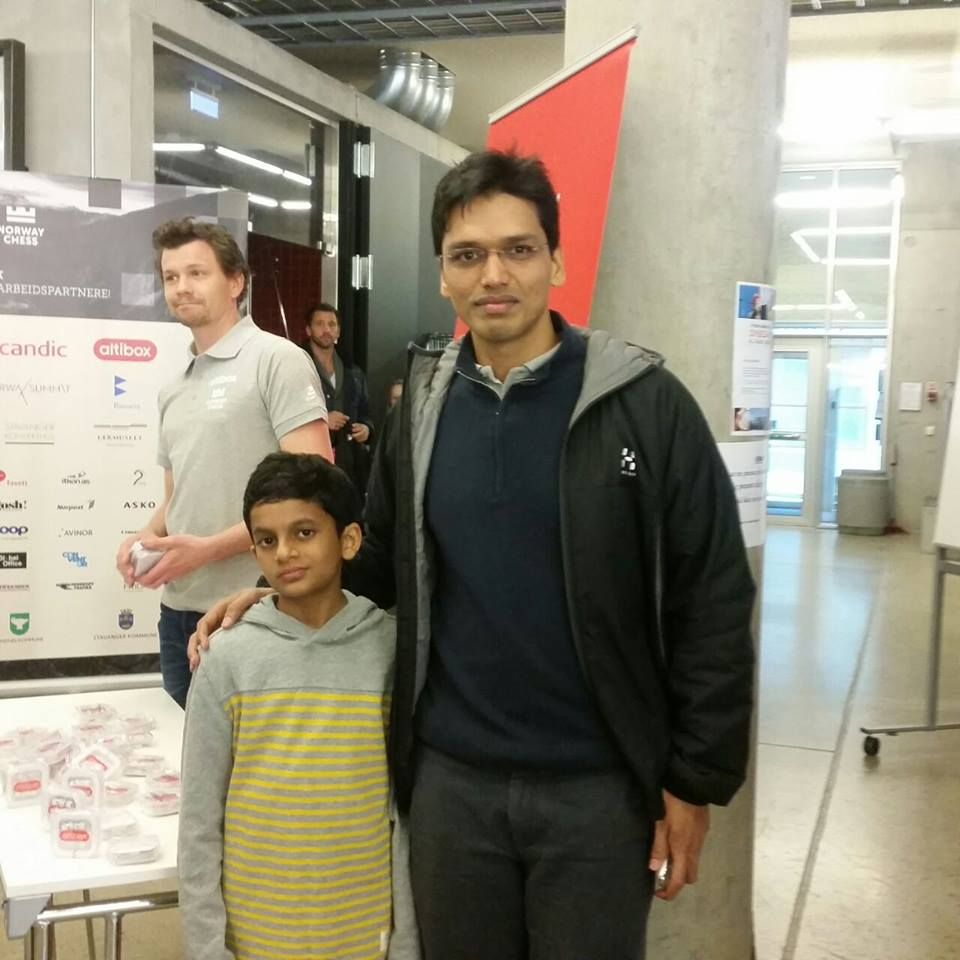 At some point young Nihal would pose with players like Harikrishna as a memory to take back home... 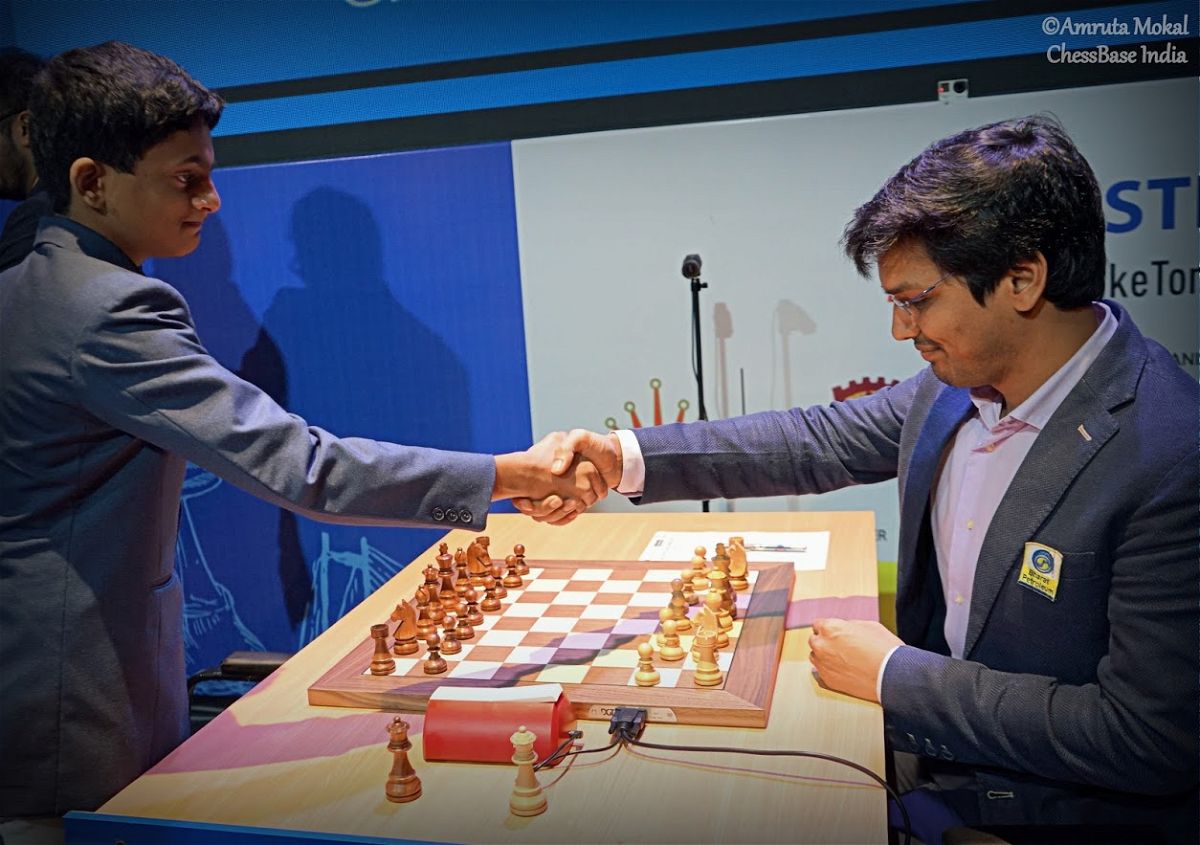 Within a few years he was shaking hands with them over the board!

Nihal had the black pieces against Harikrishna in round four and he played the opening and the middlegame quite well. We reach an endgame that was once again quite equalish.

Harikrishna vs Nihal Sarin, Round 4 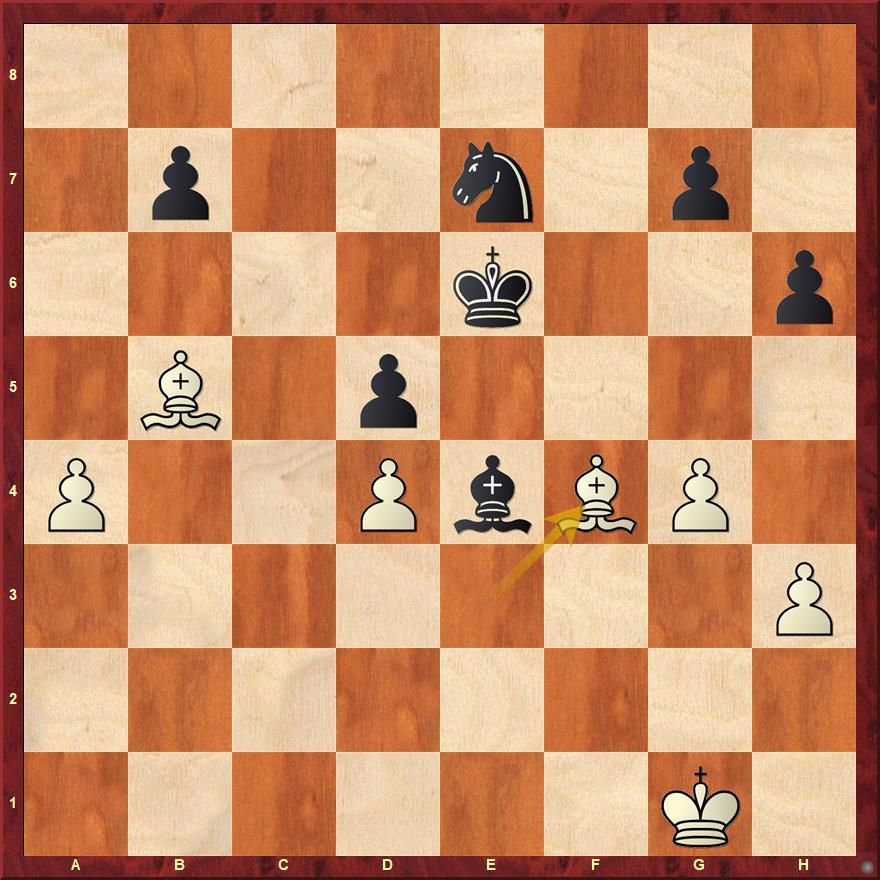 It's true that White has the bishop pair, but they are not really so effective because Black's pieces are quite active and centralized. Here Nihal could have played the move ...g5 or simply waited, but he decided to attack the d4 pawn. 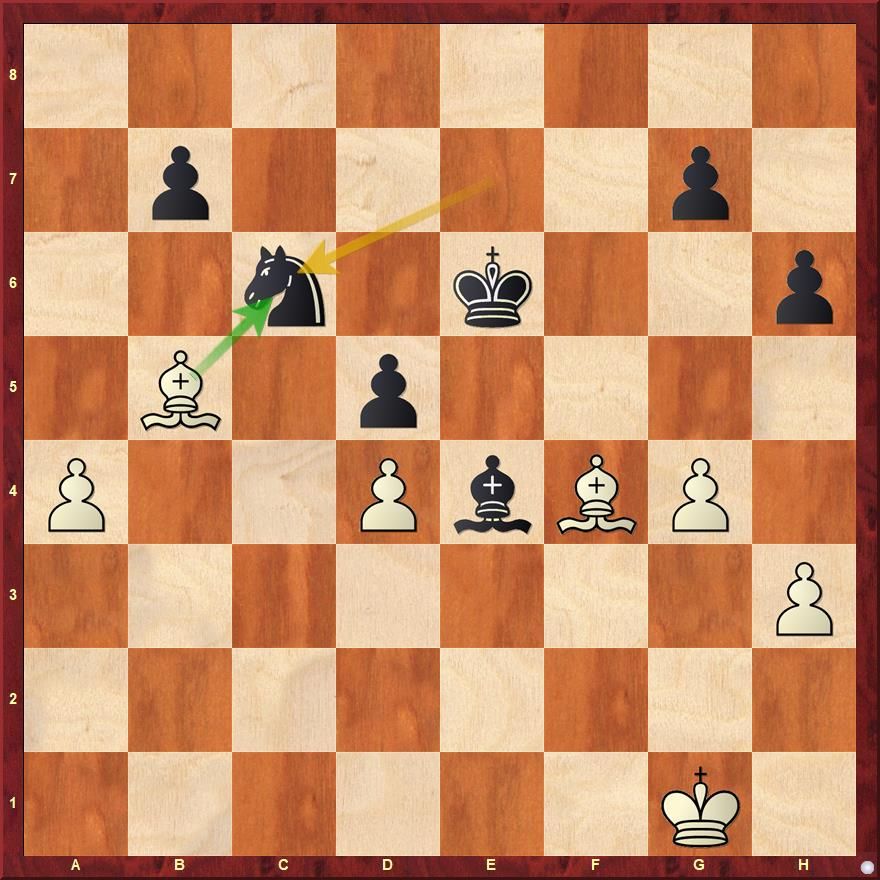 The knight moved to c6 and Nihal was expecting the move Be3 back. However, Hari surprised him with Bxc6! The position is not winning per se. However, the a-pawn coupled with kingside black pawns being on dark squares, puts Black under some pressure to find the right defensive ideas. From a position that was quite equal in nature and Nihal could play just about any way he would like, the youngster was pushed into a position where he had to be accurate. Quite an unpleasant turn of events. 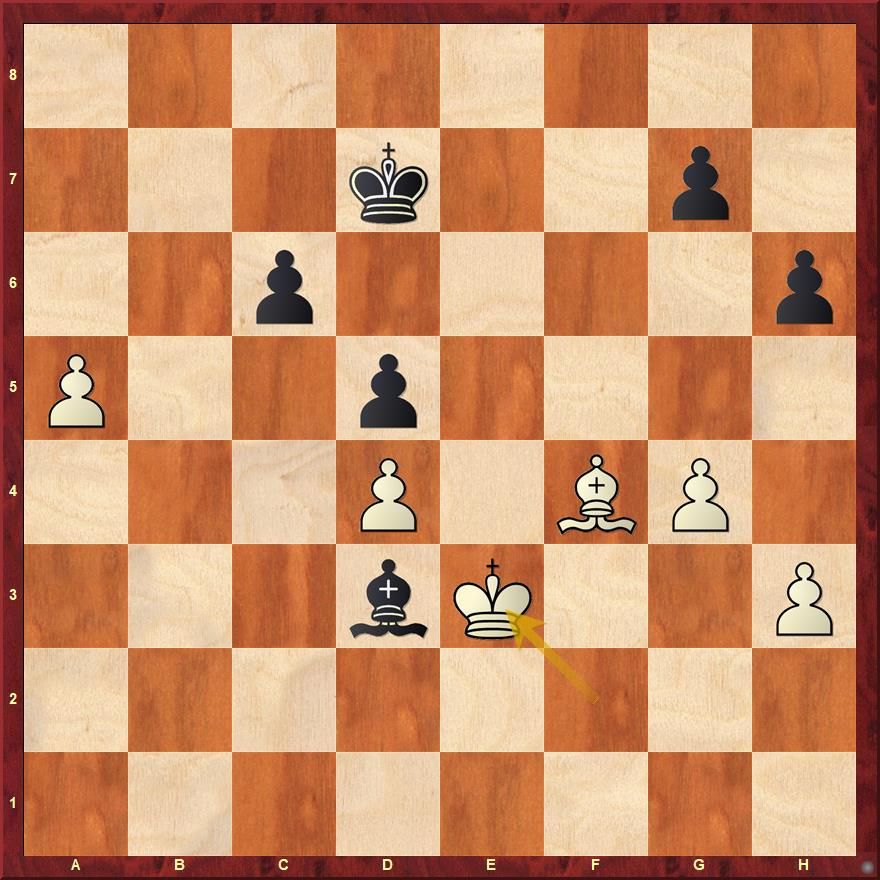 Decision time! Would you play the bishop back to a6 or to c2? Nihal played his bishop to c2, but this was not the best. He had to play Ba6 and then follow it up with a pawn sacrifice ...c5 and place his king on c6. Later he can activate his bishop via c8 and he holds the draw. 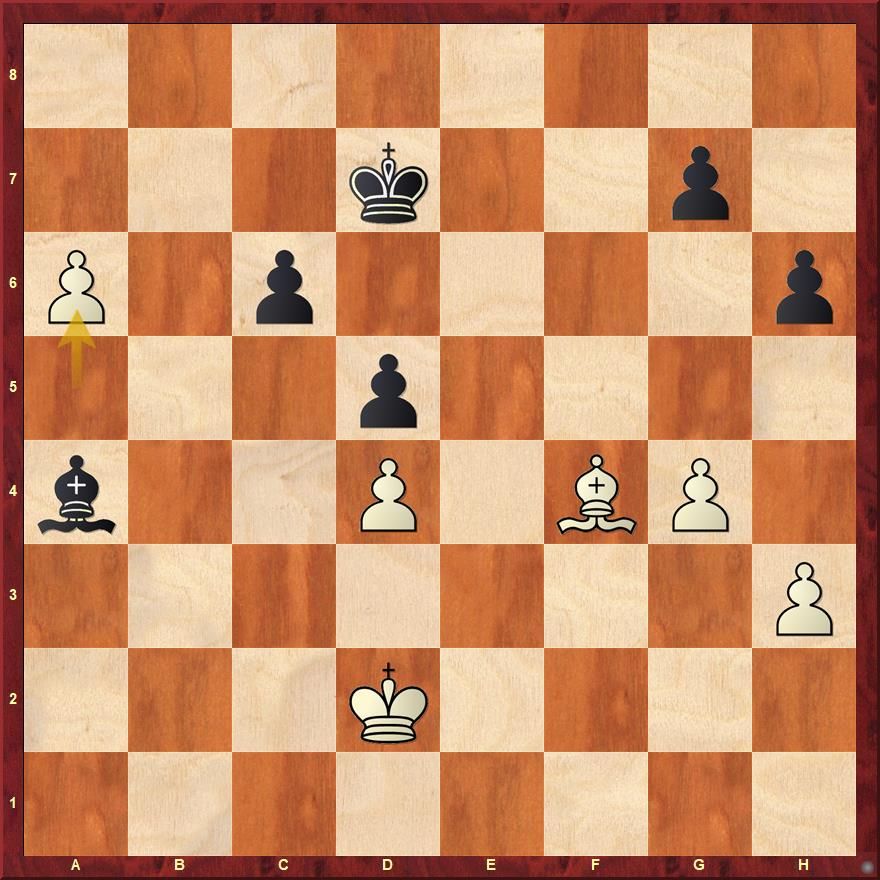 Black's last chance to hold the game was once again to sacrifice a pawn with ...c5 (check analysis in the game below). However, Nihal didn't go for it and played Kc8, but after h4, he was already in a lost position 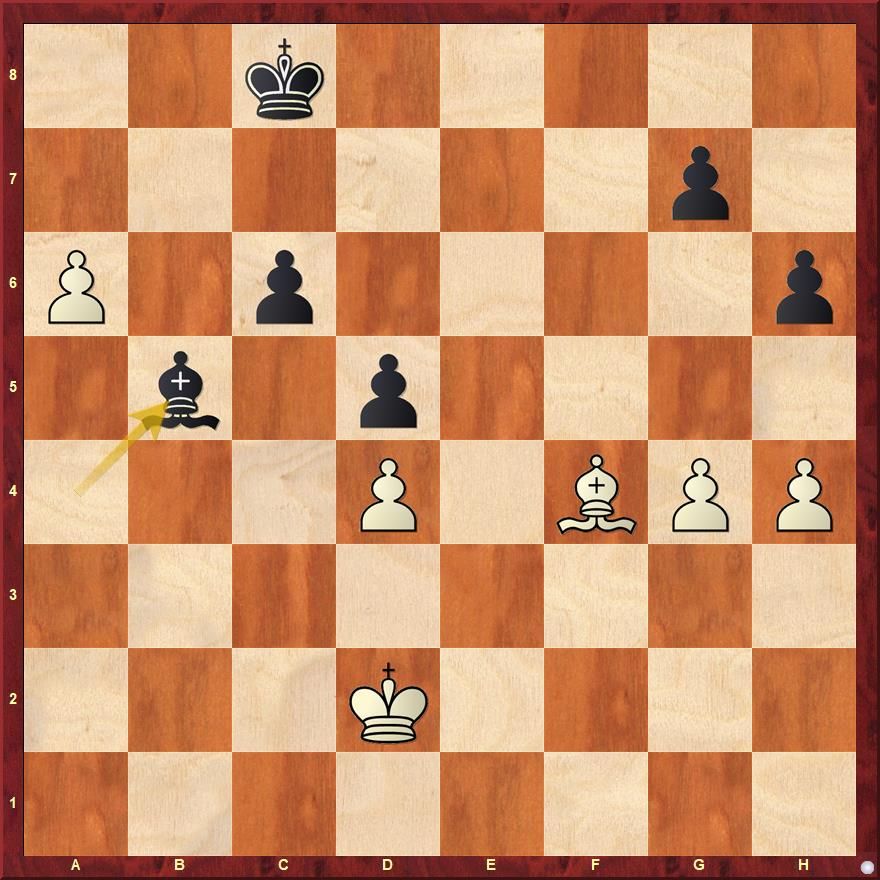 Black has just played ...Bb5. How did Harikrishna finish off the game? 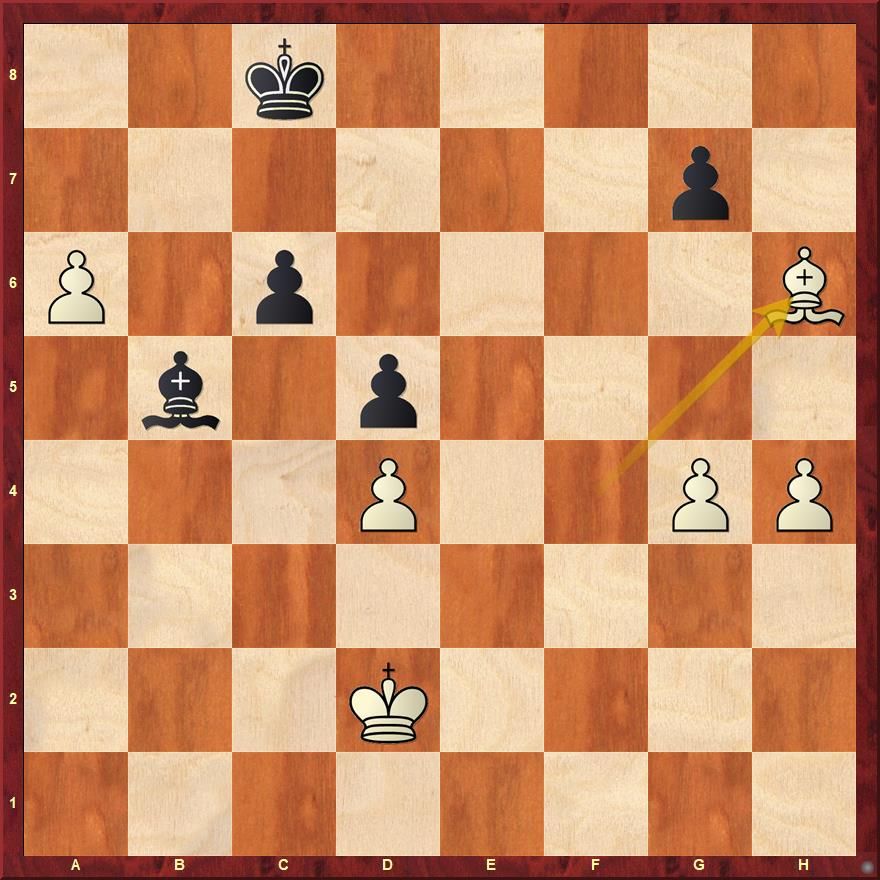 Kudos to you, if you found this move! The bishop takes the pawn on h6 and there is no way to stop the kingside pawns! 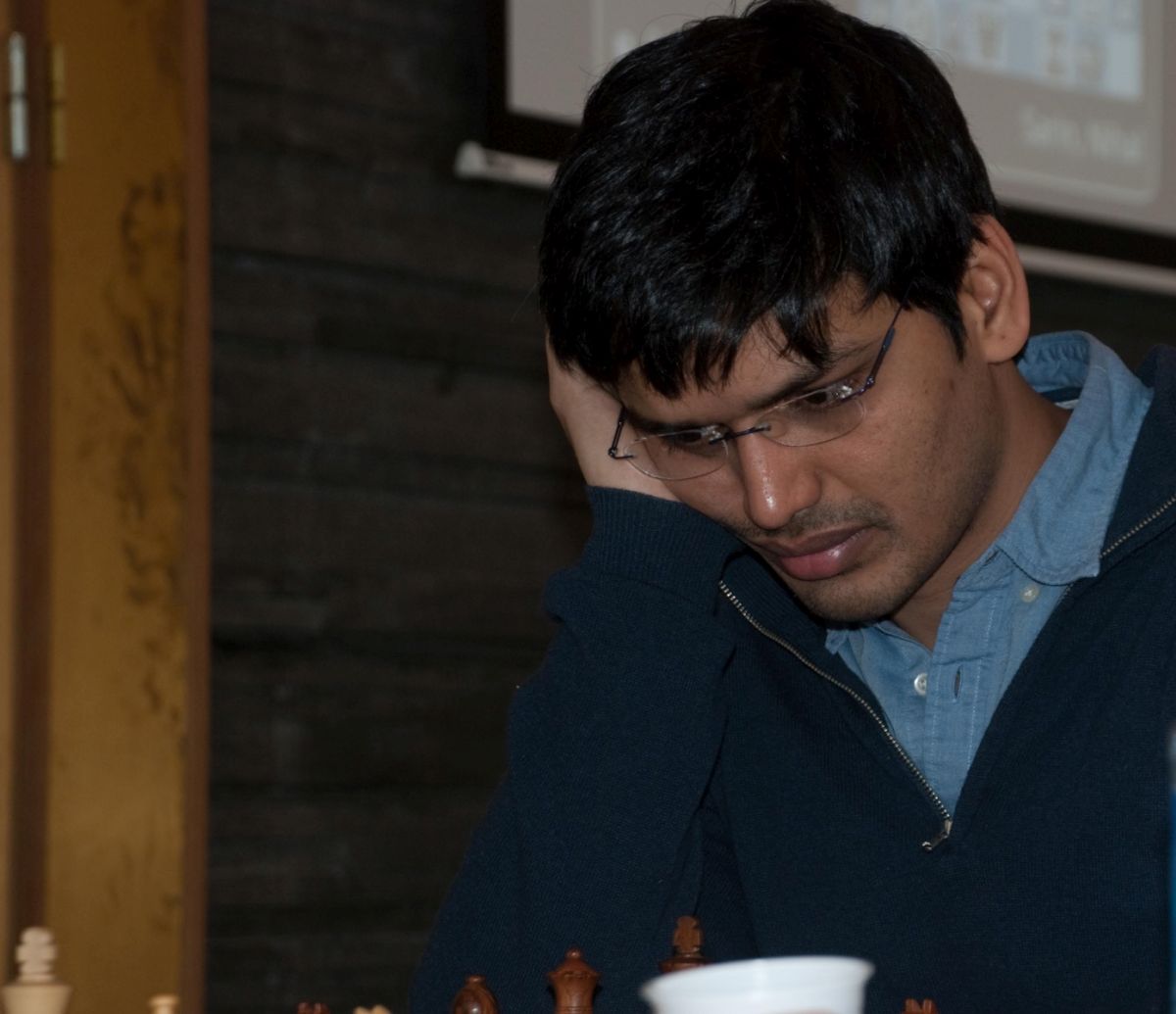 A small lesson is chess history

After Hari's victory, we found a tweet from !TUUR who says that Hari's endgame was similar to Kovacevic - Ribli, 1984. I checked this endgame and it was just so instructive. Let's see why: 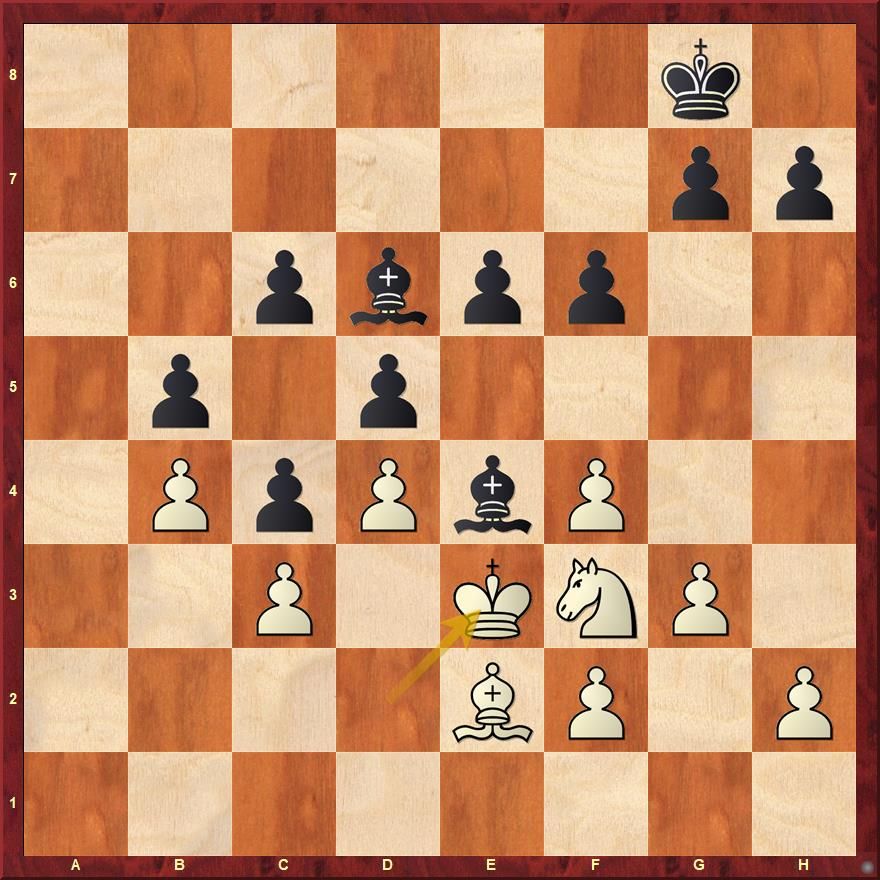 White has just played his king to e3. How would you continue as Black?

Can you guess what Ribli played here? He simply gave up his bishop pair with Bxf3! How can such a move be any good? 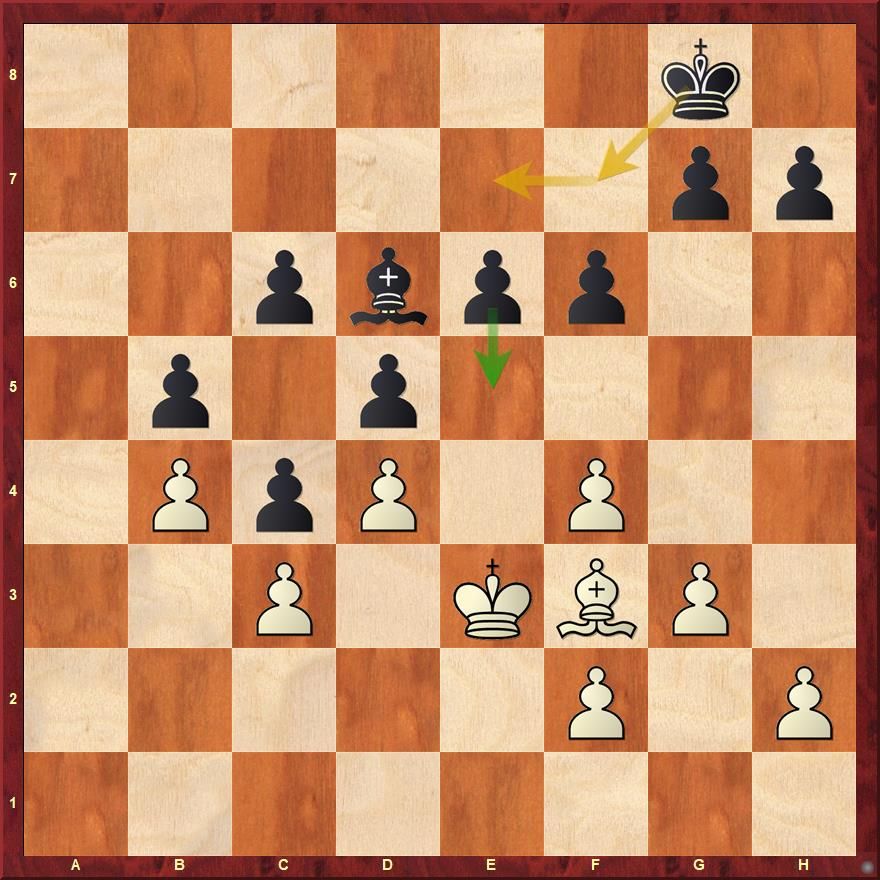 The point is very simple. Black is going to get his king to e7, so that White can never get his bishop to d7 and then Black will play the move e5. 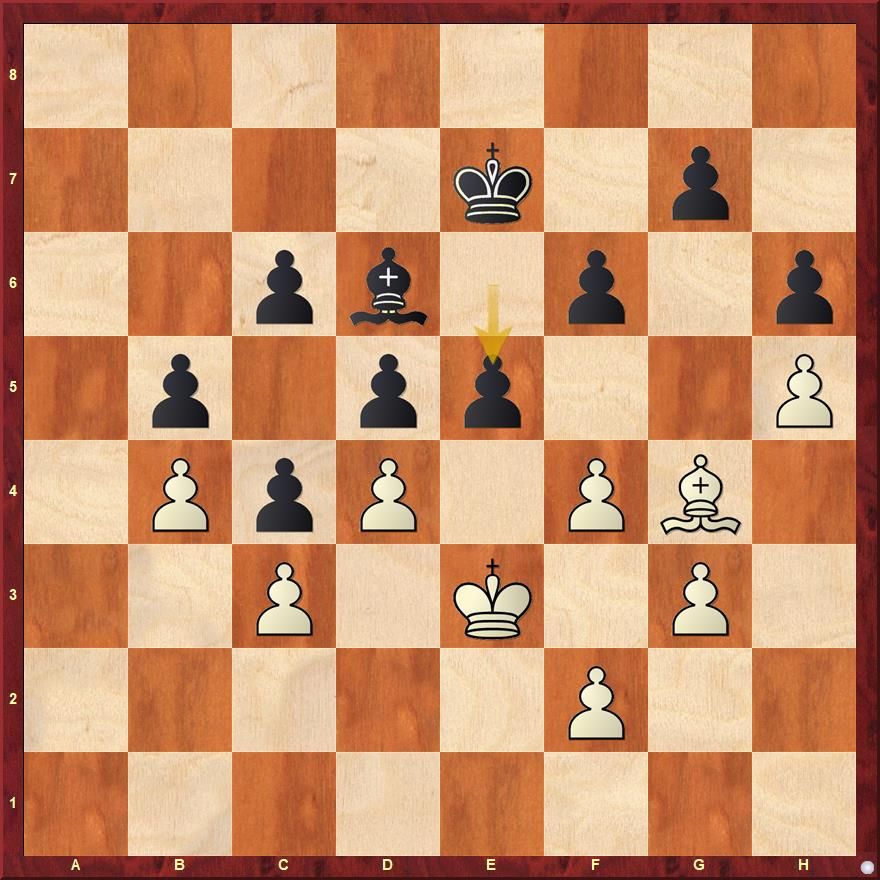 Now imagine the pawn on e5. After fxe5 fxe5 White will have a decision to make. He can either take on e5 and after Bxe5 play his king to d2, but then Black get in d4 when he is able to create to passers on the queenside. If after ...e5 fxe5 fxe5 White doesn't take on e5 then Black will take on d4. Now taking with the pawn is impossible as the b4 pawn falls. But if you take with the king, then Black just goes Be7-f6 and it is all over! This is exactly what happened in the game and Ribli won the game!

Moral of the story: Not all opposite coloured bishop endgames with equal material are drawn.

A much underestimated power of the pair of bishops: the easily available yet unexpected liquidation😀 : #TePeSigeman @Harichess struck with 39.Bxc6! after 38…Nc6? from @NihalSarin just like in 1984 Ribli stunned & beat Kovacevic with the amazing 26…Bxf3! @GMjtis @ChessbaseIndia pic.twitter.com/IJIHLwq9wB

We would like to thank !TUUR for bringing this wonderful game to our notice!