Day 1 of the King Salman World Rapid and Blitz Championship turned out to be a horrible day for Magnus Carlsen. In round 1, he lost on time against Adam Tukhaev while in the very next round, he suffered another bitter defeat due to a blunder in a clearly better position. Vishy Anand, in the meanwhile, finished undefeated with 3.5/5 as did Pentala Harikrishna. In the women's group, Ju Wenjun took sole lead in the tournament winning all of her four games of the day. India's Koneru Humpy mustered up 3.0/4, scoring two wins and two draws in her first four games. Day 1 report.

The King Salman World Rapid and Blitz Championship, 2018 kicked off in the Russian city of St. Petersburg on Wednesday. The 15-round Swiss league is slated to be played over three days until Friday, December 28, before proceeding to a two-day blitz event on the following day. Time control for the rapid event will be 15 minutes for the entire game with a 10-second increment from the first move. The prize fund in the open group is $350,000 with the first prize of $60,000 while in the women’s group, the total prize fund is $150,000 with the winner’s share being $ 40,000.

Some of the top names in the field include Magnus Carlsen, Shakhriyar Mamedyarov, Anish Giri, Hikaru Nakamura and the reigning world rapid champion, GM Viswanathan Anand. The women’s group will also see a long list of top-notch players including the reigning world champion, Ju Wenjun, Mariya Muzychuk, Kateryna Lagno, Alexandra Kosteniuk and other top players. The Indian charge will be headed by Harika Dronavalli and Koneru Humpy who are seeded ninth and tenth respectively in the starting rank.

Carlsen, after a convincing victory over GM Fabiano Caruana, in the world championship tiebreaks, less than a month ago, was very confident about his chances in faster time controls. Prior to the championship, he had already expressed his intention to clinch the top title in all three formats. “I am going to take back the triple throne – no usurpers are going to be left alive,” Carlsen had said earlier.

During the opening ceremony, Carlsen had stated that he felt that he had what it took to win the rapid and blitz world titles and was pretty optimistic about his chances. But the inaugural round turned out to be a rude awakening for the reigning world champ.

Although, with a rapid rating of 2903, Carlsen is, by far, the strongest player in the field, clinching the title, even for him, is no mean feat. In the inaugural round, before Carlsen had faced any real ‘usurpers’ like Nakamura, Mamedyarov or the reigning champ, Vishy Anand, he suffered a shocking defeat at the hands of Ukrainian GM Adam Tukhaev.

As black, Carlsen had done everything right in the game. He had equalized comfortably out of a Sicilian Sveshnikov and was pushing for a win, having won a pawn by the 30th move. Tukhaev, however, found the best practical chances in the game and put up stern resistance. Late in the endgame, he was very close to stealing a draw via perpetual checks. Carlsen was forced to spend time to find some tricks to circumvent the splitting of the point. Deploying some neat tricks, he even managed to get a better position but by this point, he had run out of time! 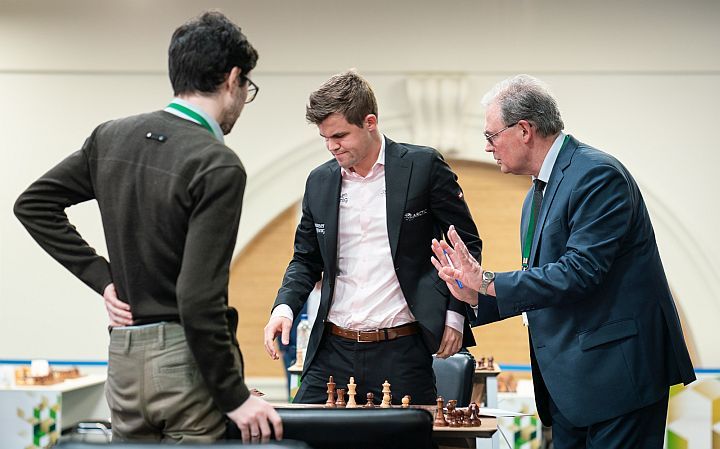 Carlsen was clearly not happy with the outcome of his first game | Photo: Lennart Ootes

Wounded, Carlsen wanted to come back with a roar in the succeeding game. He went after checkmate from the word ‘go’, whipping his queen out on the second turn. But round two provided no respite either. Just when Carlsen seemed to be on the front foot against Shamsiddin Vokhidov, the world no. 1 stumbled again and suffered a ruinous loss of material owing to his blunder on move 22. 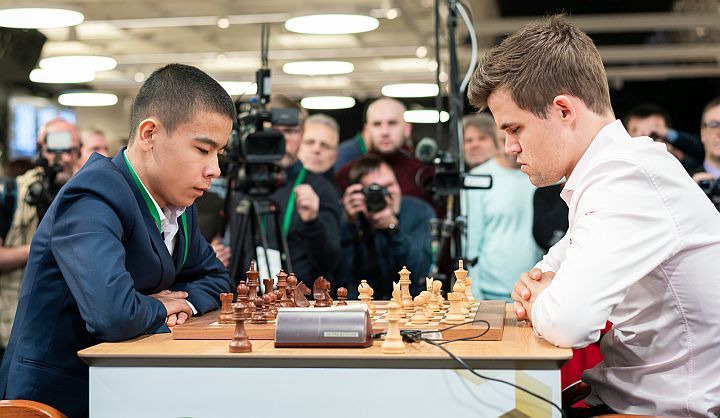 Another shocking defeat awaited Carlsen in round 2 | Photo: Lennart Ootes

In the remaining three games of the day, Carlsen mended the damage to the best of his ability, winning three games in a row. Meanwhile, the top spot was shared at the end of the day by Ian Nepomniachtchi, Dmitry Andreikin and the 15-year-old Iranian GM Alireza Firouzja.

Scoring wins in all of their first four games, Nepomniachtchi and Andrekin concluded the day with a relatively uneventful draw in the fifth round against each other. However, Nepomniachtchi’s fourth round win against Hikaru Nakamura was especially noteworthy. After the American grandmaster’s overambitious play in the opening, Nepomniachtchi had a strong bind over the position and pulled off a dominating victory. 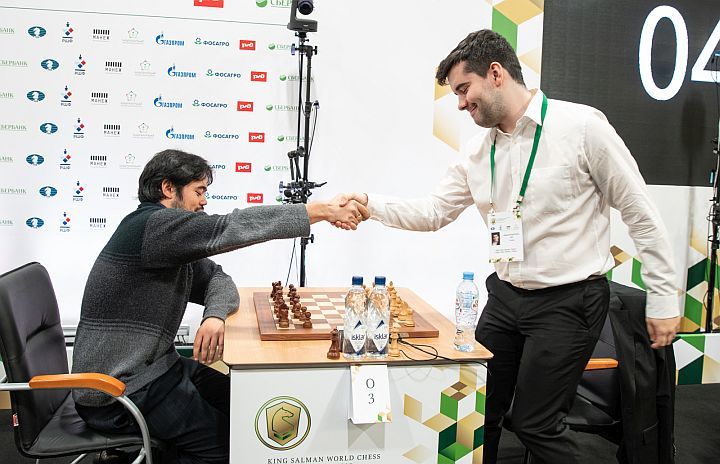 Nepomniachtchi scored a fine win over Nakamura in round 4 | Photo: Maria Emelianova

Andrekin, too, had scored a fine win with the black pieces to move up to the top spot after the fourth round. In a Four Knights Defence game, he generated a strong attack on Vladislav Artemiev’s king to force resignation in 37 moves.

Firouzja was half a point behind the leaders at this point and only got to join the leaders after they drew among themselves in the final round of the day. In his game against Vladislav Artemiev in round 5, the Iranian teenager had won an exchange in the middle game and made no mistake converting his material edge to move up to 4.5/5.

Defending champion, GM Viswanathan Anand finished day one with an undefeated 3.5/5, scoring two wins and three draws.  In the fourth round, Anand had good chances to score a win in the endgame against Russian GM Artyom Timofeev. But the Indian ace did not manage to find the most critical continuation and ended up conceding half a point. Still, with ten more rounds to go, he is still very much in the running being only one point behind the tournament leaders. 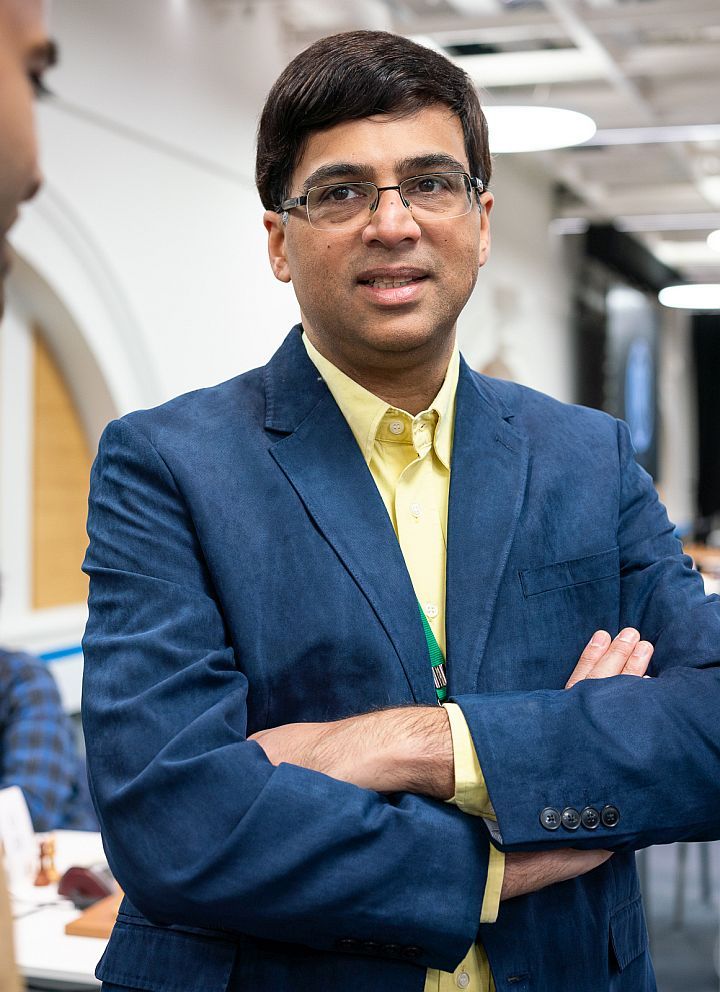 In the opening round, Anand had scored a nice tactical win over Israeli GM Baron Tal.

Harikrishna also remained unbeaten and finished the day with 3.5/5. He was off to a great start scoring wins in his first two games but eventually slowed down and conceded draws in the final three games of the day. His win over Konstantin Sakaev was especially noteworthy. 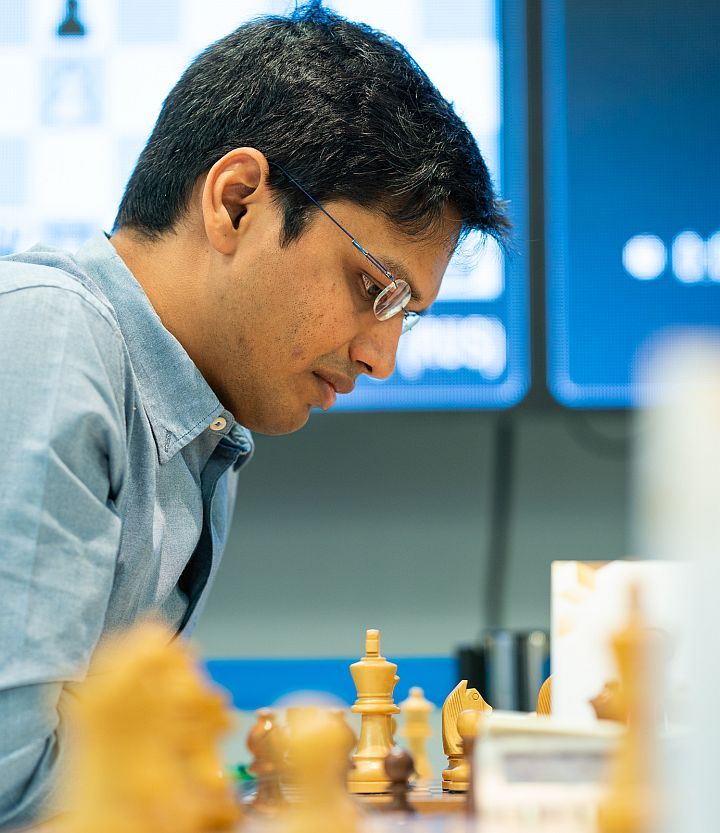 After a great start, Harikrishna ended the day with three back to back draws | Photo: Lennart Ootes

The women’s group had one less round on the opening day. After the scheduled four rounds for the day, tournament’s second seed, GM Ju Wenjun finished on top of the leaderboard winning all of her games. On her way to the top, she defeated some strong players like Olga Girya and Valentina Gunina. In the fifth round, she will be pitted against the top seed of the tournament, GM Anna Muzychuk of Ukraine. 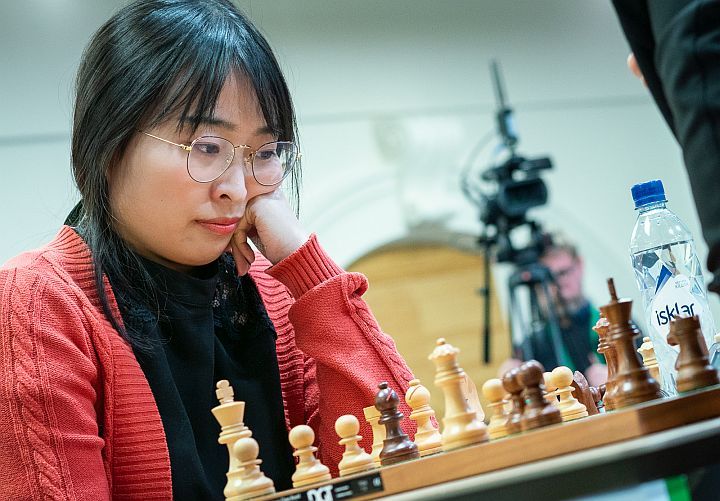 Among the Indians, Koneru Humpy was the most impressive. Scoring two wins and two draws, she concluded her opening day campaign with an undefeated 3.0/4. As of now, she is joint third by score, a full point behind Ju Wenjun. 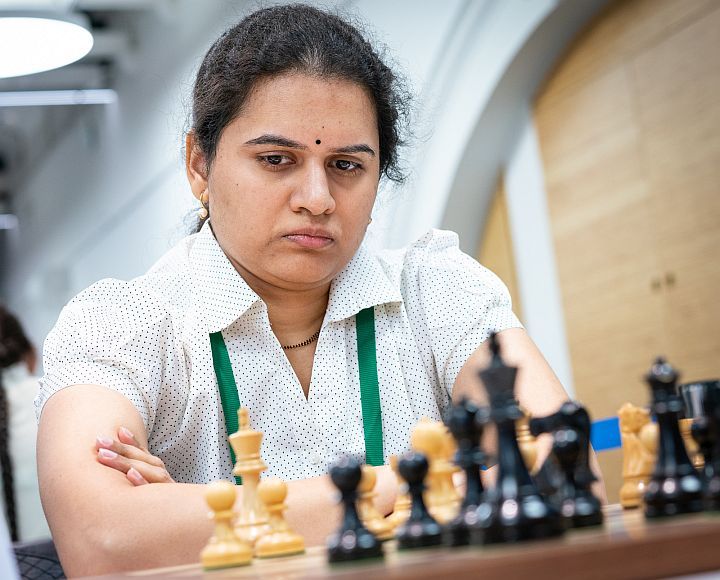 Harika Dronavallli, in the meanwhile, had a very bad day at the office. With two draws, a loss and a win, she only managed to muster up 2 points in her first four games and has fallen down to the 68th spot on the leaderboard. 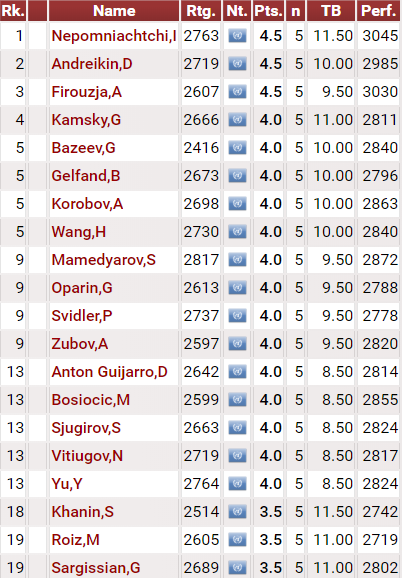 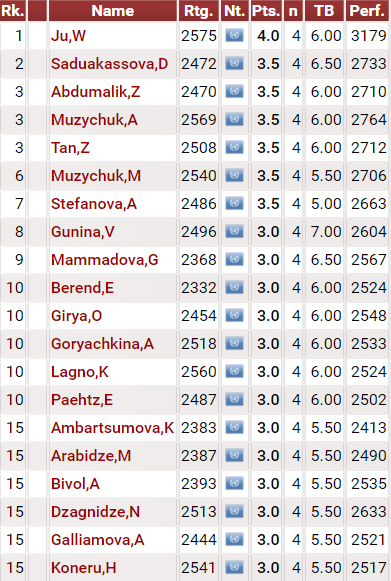