The fifth round of the 2018 Batumi Chess Olympiad witnessed India lose its first match of the event by the slimmest possible margin. Playing against the top-seeded United States, the team fell short by a point, losing the game by a score of 2½ - 1½.  While three games finished peacefully, Vishy Anand made an unfortunate blunder on the top board against Fabiano Caruana and lost in merely 26 moves. In the Women's segment, the team scored an emphatic 3-1 victory with wins by Harika Dronavalli and Tania Sachdev. Round 4 report.

The Indian team had got off to a flying start at the 43rd Chess Olympiad in Batumi, Georgia, winning all of its first three matches.  While these were against weaker opposition, the team had been winning convincingly with a 3 point margin in each match.

Swiss leagues are so designed that every time a team wins, they are pitted against a stronger opponent in the next round. For India, this meant a clash with the best team in the fray, the United States of America.

The American team is a lot stronger in comparison to India on paper. The Indian team was overpowered by rating on every board and, perhaps, playing safe was the team’s strategy.

Krishnan Sasikiran, who was playing on board 4 against Sam Shankland, was the first to finish his game. Shankland has had a wonderful year so far. Earlier this year, he had been the surprise winner of the US Open Chess Championship, finishing ahead of his teammates, Fabiano Caruana, Wesley So and Hikaru Nakamura.

The game had concluded in a draw in the Berlin Defence. Shankland played the main line of the Berlin with the black pieces and the game headed straight into an endgame. Trading another pair of minor pieces, the players agreed to a tepid draw by repeating the position around move 20. 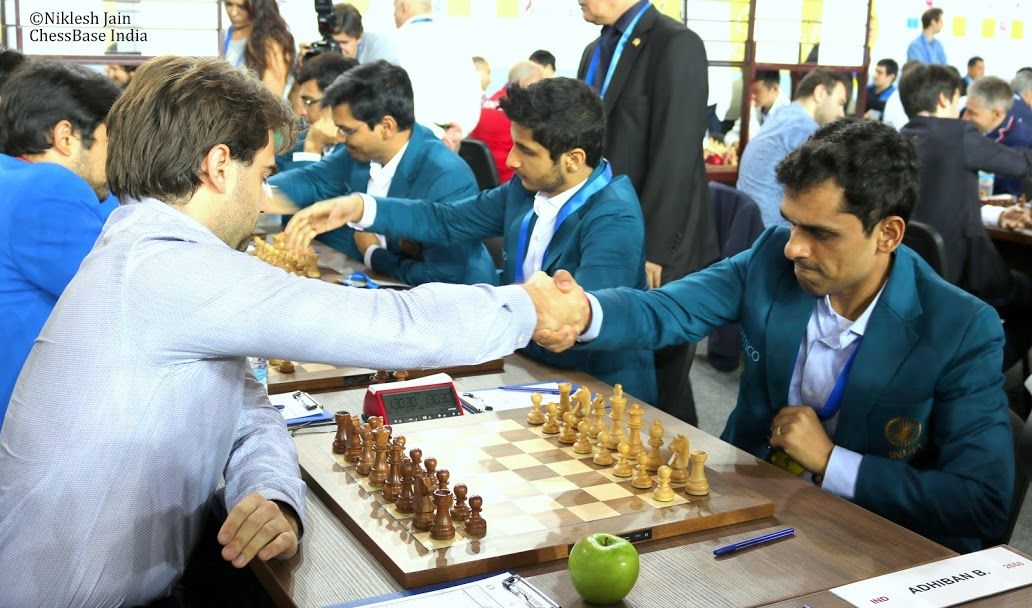 Pentala Harikrishna’s game against Wesley So did not last much longer either – not at least in terms of time taken to finish the game. Like Shankland, So, too, chose the Berlin to counter Hari’s king’s pawn opening. Unlike Sasikiran, though, Hari avoided immediate liquidation of the position. But the game was still in the well-known territory. The game followed the moves of the game played between Fabiano Caruana and Viswanathan Anand from the rapid leg of the Paris Grand Chess Tour in June this year for the first 12 moves. On move 14, Hari played a novelty.

While Harikrishna had managed to avoid a trade of queens, a pair of rooks and minor pieces was exchanged off anyway. By the time the middle game was reached, Hari had managed to induce some pawn weaknesses in the enemy camp. So’s position also looked a little passive but the American number two proved that he was completely in control of the situation. Trading more pieces, the players reached a dead equal endgame and, by the 32nd move, decided to sign peace. 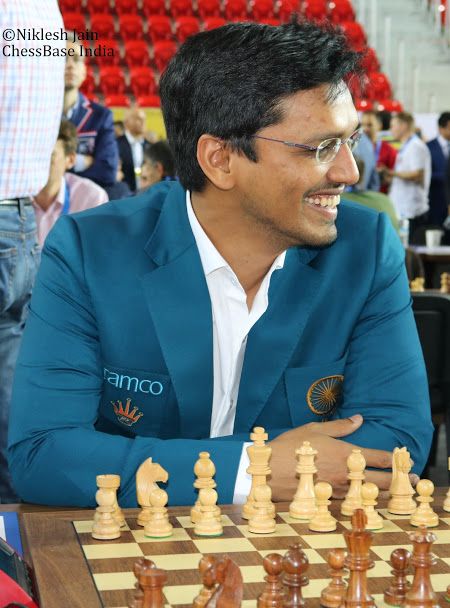 Harikrishna scored the second quick draw of the day against Wesley So | Photo: Niklesh Jain

While the scores stood levelled at 1-1 about two-and-a-half hours into the round, these draws were, in a way, minor victories for the Americans. In both games, it was the American players who had the black pieces. The US was now ready to push for a win in the games where they had the white pieces. At the time, it seemed that even if Anand managed to hold Caruana, Vidit Gujrathi would have a tough time against Nakamura.

However, just a few minutes after Harikrishna’s draw, a shocking result came from the top board. Viswanathan Anand had blundered against Fabiano Caruana and had lost from an equal position. The two had discussed a Catalan Opening in which Vishy had managed to equalize with the black pieces and was pretty comfortable in the middle game. On his 20th turn, however, Anand made an unfortunate tactical oversight. As a result, the former five-time world champion was forced to throw in the towel, just 26 moves into the game. His long time second, GM Surya Shekhar Ganguly analyzes the game in the below. 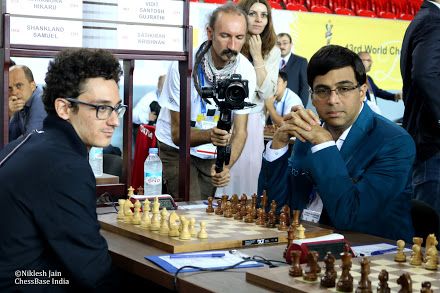 A sudden, shocking blunder by Anand gave the United States a decisive edge in the match | Photo: Niklesh Jain

Now the onus of saving the day was on Vidit Gujrathi’s shoulders. Vidit was playing Nakamura with the black pieces on board three. The game had begun with the Queen’s Gambit Ragozin. Vidit was slightly worse out of the opening but had managed to equalize.

By the time Anand had lost, Vidit’s position wasn’t bad but it was by no means winning. More importantly, Vidit was perhaps preparing to hold Nakamura to a draw. But Anand suddenly went down and now Vidit was in a must-win situation.

About Vidit’s position, tournament’s official commentator, GM Ivan Sokolov opined that although the position was objectively equal, if anyone was better it was black (Vidit). IM Sagar Shah also noted that the position, although equal, was easier for Vidit to play than it was for Nakamura. Nakamura tried some tactics to improve his position but Vidit saw through the tactics well and kept his position intact.

After making his 35th move, Nakamura offered a draw. Vidit, after consulting with the team’s non-playing captain, GM RB Ramesh, accepted the draw offer – and with it the match defeat. 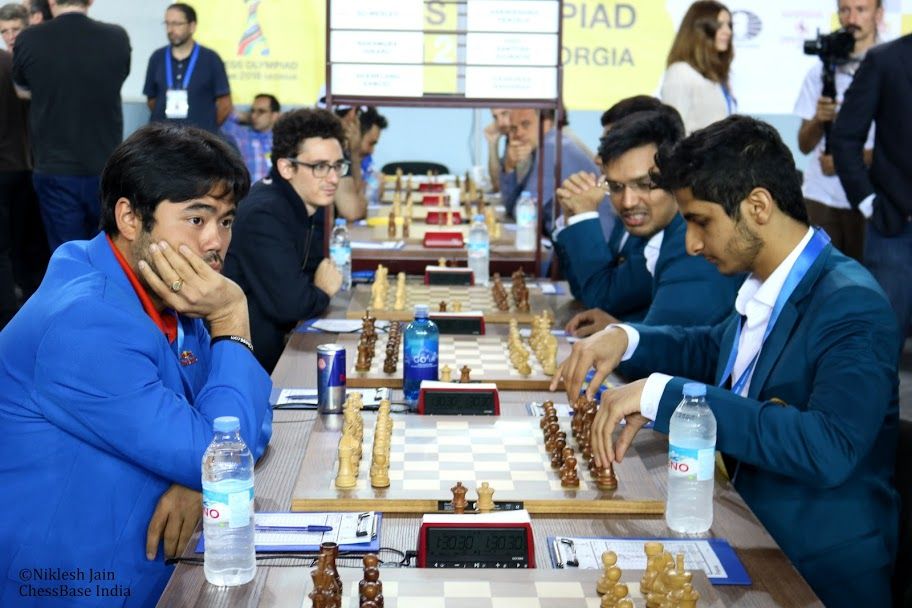 Vidit Gujrathi's draw against Nakamura spelt the end for team India as they lost with a 2.5-1.5 score | Photo:Niklesh Jain

With this loss, India has dropped down to the 14th place on the leaderboard. While is a big setback for team India, there are seven more rounds to go and the team will have ample opportunity to stage a comeback.

In the women’s section, the Indian team, which was held to a draw in the previous round by Serbia, came back strongly, defeating Poland in with a 3-1 score in round 4. IM Tania Sachdev scored the crucial win for the team over Klaudia Kulon. On board one, Poland’s top woman, IM Monika Socko held GM Koneru Humpy, overcoming a 100-point rating difference.  IM Eesha Karavade was also held to a draw by Anna Warakomska, who was rated about 70 points lower to the Indian fourth boarder.

Harika Dronavalli’s game against Jolanta Zawadzka was the last one to finish. In this tumultuous encounter, Harika had a much inferior position out of the opening and was also lost at several points in the game. While Zawadska kept missing opportunities, the position oscillated between being better for white and equal.

Around move 35, Harika made a couple of attempts to sign peace by repetition. Given the match situation, it was understandable that Zawadzka declined these subtle draw offers breaking the move repetition every time. But just one move before making it to the first time control, Zawadzka made two back to back blunders that left her with a serious material deficit. It took Harika about 20 moves to convert but the Indian number two made no mistake in bringing home the full point. 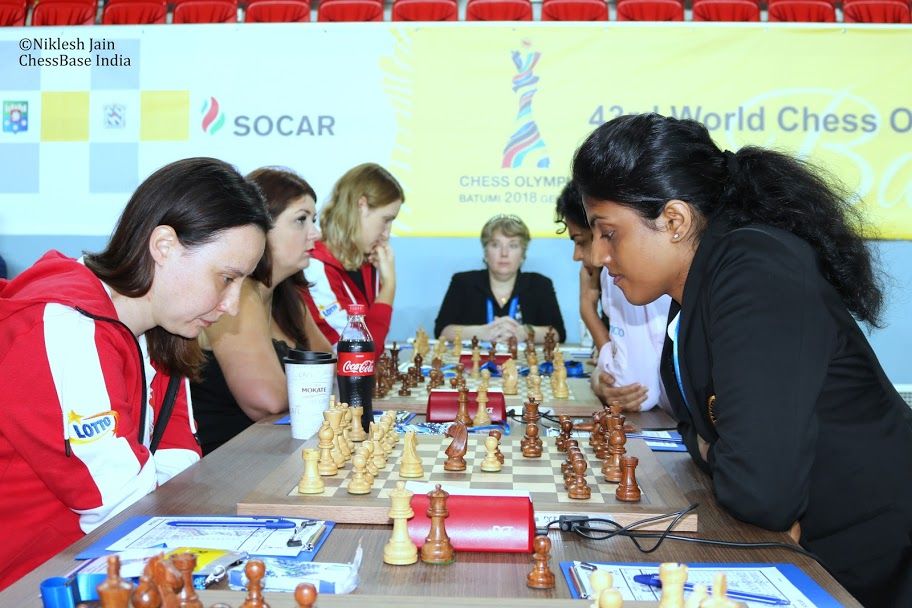 Despite the team only needing a draw, Harika Dronavalli went for the kill against Jolanta Zawadzka and pocketed the full point | Photo: Niklesh Jain
GM Jacob Aagard gives his take on the match and briefly analyzes all games of the India-Poland match | ChessBase India Youtube

With this win, India has made it back into the top 10 on the leaderboard in the women’s group. In the fifth round, the team will play the much weaker Argentina on board 4. The Open team will also have a relatively easy round as they face Paraguay on board 8. Paraguay only has two Grandmasters and the fifth-seeded Indian team will be a huge favourite to win.