Magnus Carlsen is in scintillating form in San Francisco as he not only won the Champions Chess Tour Finals, but the entire 2022 event. In round 6 he played an excellent match against Praggnanandhaa to win 2.5-0.5. After the match ended, we were able to get Magnus on the livestream to discuss some of the critical moments from the match. The world champion also showed us a very interesting position that he had studied at a training camp recently. All of this happened at 4.30 a.m. Indian time! A very special interview that ended with Magnus praising the work that ChessBase India is doing and giving a big shout out to the Indian talents and fans!

IM Sagar Shah (SS): Hello Magnus, congratulations for the amazing match with Pragg. Could you tell us a few words about the match and how it was?

Magnus Carlsen (MC): Thank you! Yeah, it was very tough. In the first game, he put a lot of pressure on me out of the opening, but I think I solved the problems in a decent manner. 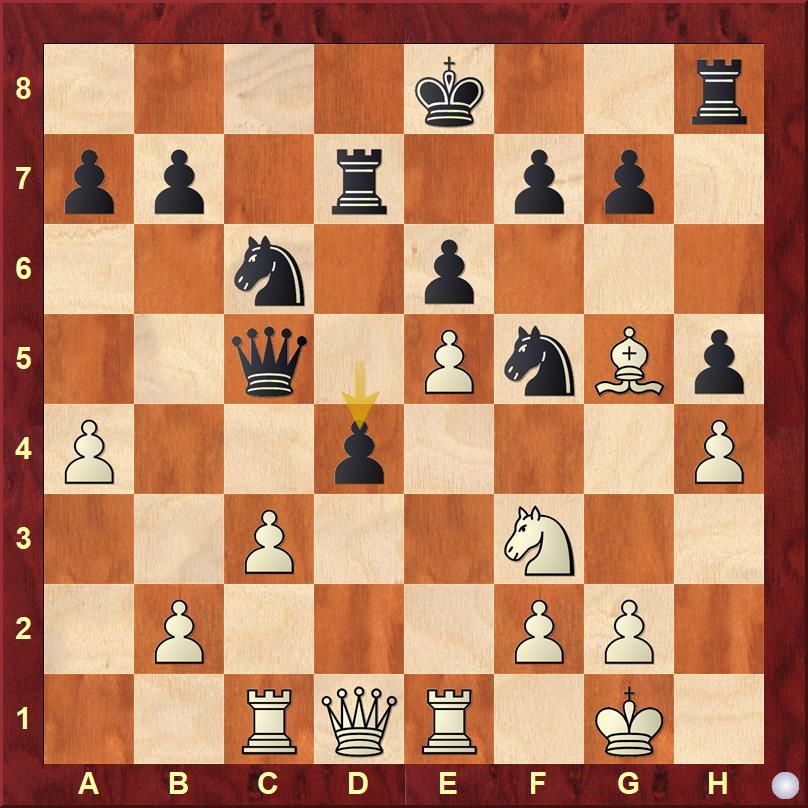 MC: Yeah, but ...d4 was born out of necessity, because if I play ...a5, there's Nd4. If I castle, there's b4 Qb6 Nd2. So, there wasn't a lot of choice. I just had to make sure it doesn't lose immideatly, and then atleast pratically speaking I'm okay.

After that, we had a difficult phase where both of us were sort of playing for a win. I think he overpushed a bit, but it was still very hard for me to play. Then with seconds on the clock, anything can happen. 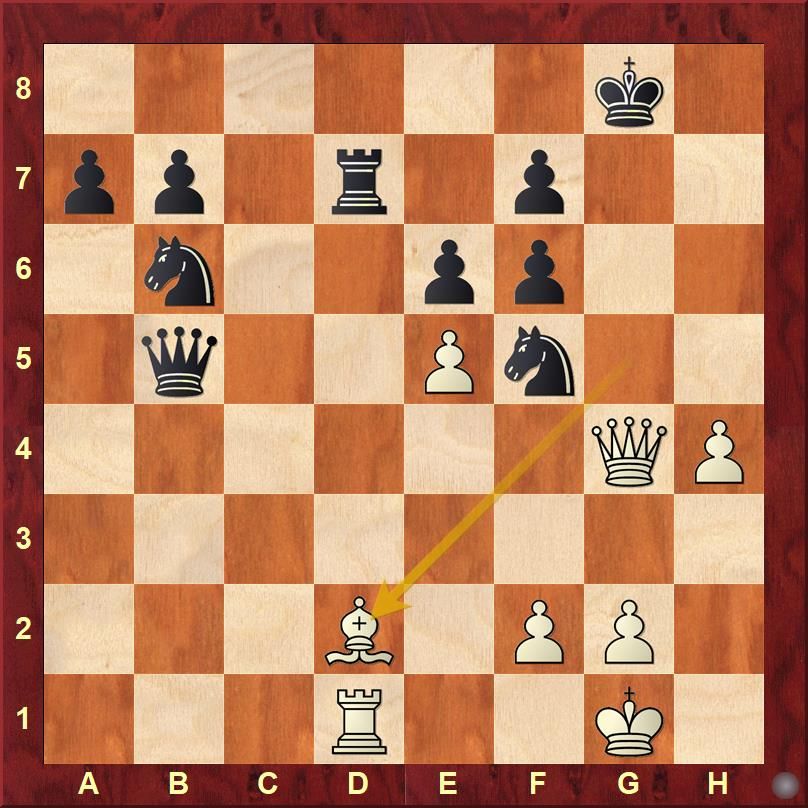 Position after Bd2+ - this move could have saved Praggnanandhaa from the loss!

The difference between Bd2+ and Bc1+ is that when you play Bd2, Ng7 doesn't work because of exf6 ,and it is Black who's getting mated. Black has to play ..Kh8 and now it's a draw by perpetual check due to Qh5+ and Qg4+. However, if you play Bc1+, exf6 is not possible because it simply hangs a rook to Rxd1+.

With seconds on the clock, that's really tough to find. So, I just have to take the draw there yeah? I thought ...Nb6 was a good practical chance, but I didn't see this. 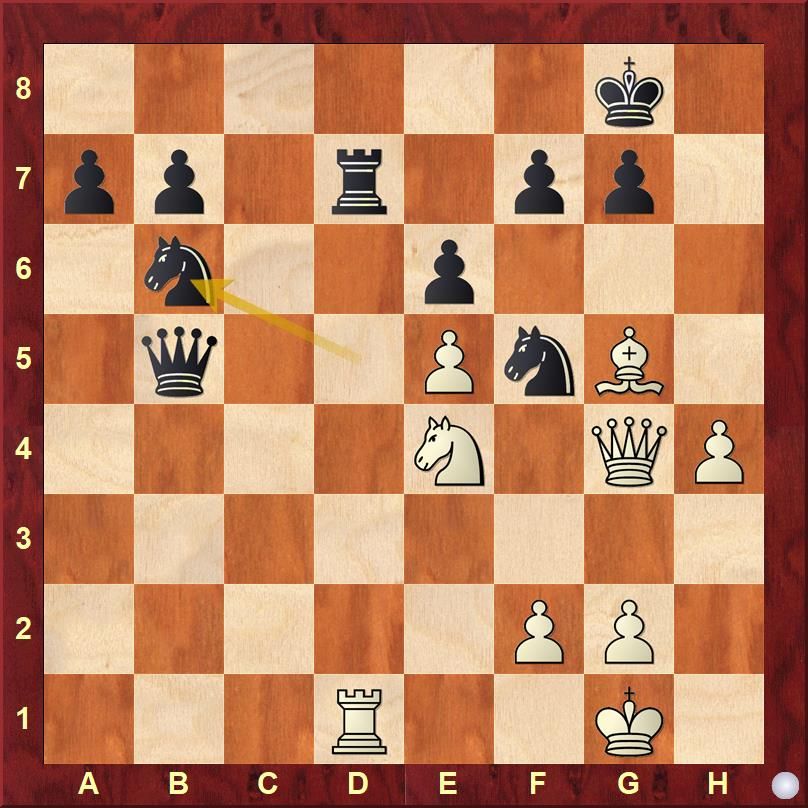 Position after 33...Nb6, which allows the drawing combination Nf6+ gxf6 Bd2+, which Pragg did not find in the game. 33...a5 would've been a better move for Magnus.

This would've been a fitting end to the game [Magnus smiles].

SS: The next game was also very very interesting.

MC: Yeah, I think he handled the position better than I did at some point. I was drifting and he was generally outplaying me. But things can happen when you're short on time, and that's what this game showed.

SS: Yeah, there was this one very nice moment here. I mean when he took ...Qxg2, were you worried about your position at this point? 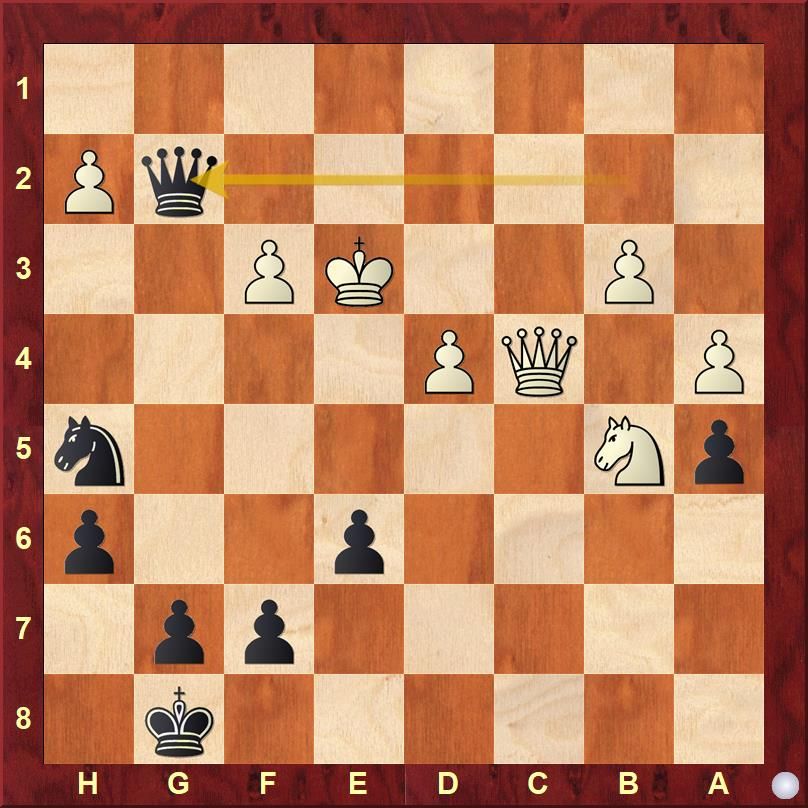 MC: Yeah, I was just trying to hang on move by move. I thought that there was probably some precise sequence which gave him very good winning chances, but as I said, I was just trying to hang on. I thought that from a human perspective, 33.d5+ Qg1+! 34. Kd3 Qxh2 was very natural, but atleast he has to deal with a passed pawn here, so I had some chances atleast practically speaking. But yeah, that was tough. I'll tell you one funny thing about the endgame: 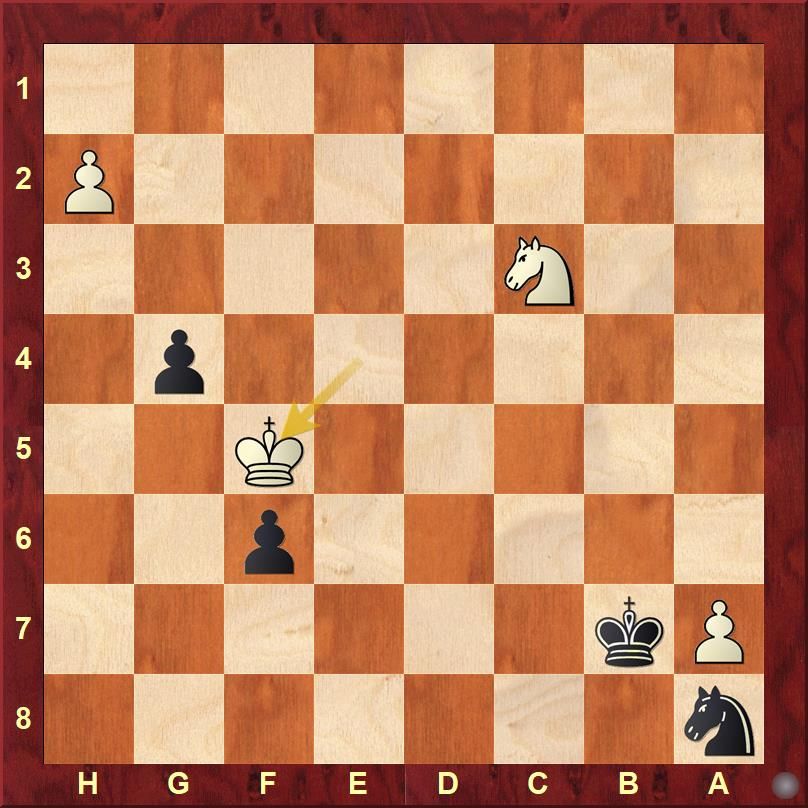 Position after 57. Kf5. Believe it or not, Black has only one move to save the position! Can you find it?

I mean, I understood that ...g3 was the theme, but I didn't believe that it would work. I thought I was still on time, but apparently I'm not. 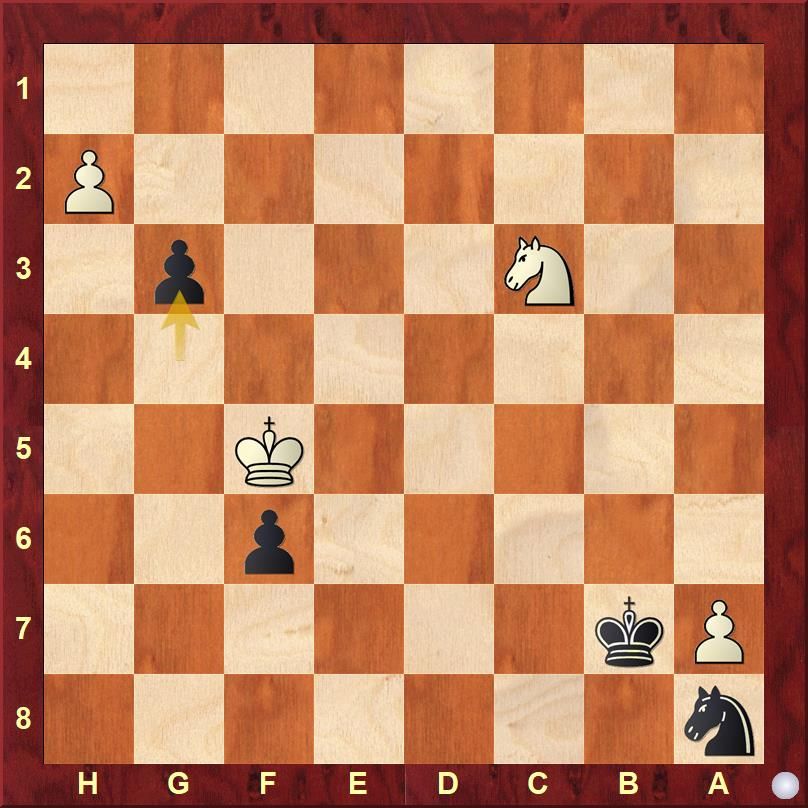 57...g3!! is a fantastic study-like pawn sacrifice, and the only move which draws the game for Black, as hxg3 Nb6 Kxf6 Kxa7 should be a draw. It's very important to force the White passed pawn to come to the g-file, as it is not possible to stop if it is on the h-file. Praggnanandhaa couldn't find this, and ended up playing 57...Nb6, losing the game in a few more moves.

The funny thing is, Boris Gelfand was in Oslo a few weeks ago. We had a training session with youngsters from my Chess Club. I stopped by for a bit, and he actually showed me a position from a Bishop endgame. 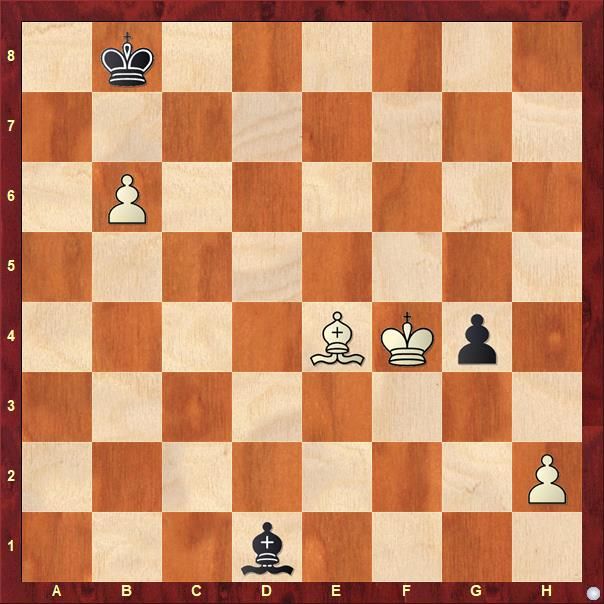 Can Black save this?

The point is, once White goes Bf5, ...g3!! is the only move that draws for Black. Black has to win a tempo so the King has to take, as hxg3 is a fairly simple draw. After Kxg3, Black plays ...Kg7 and draws by one tempo! 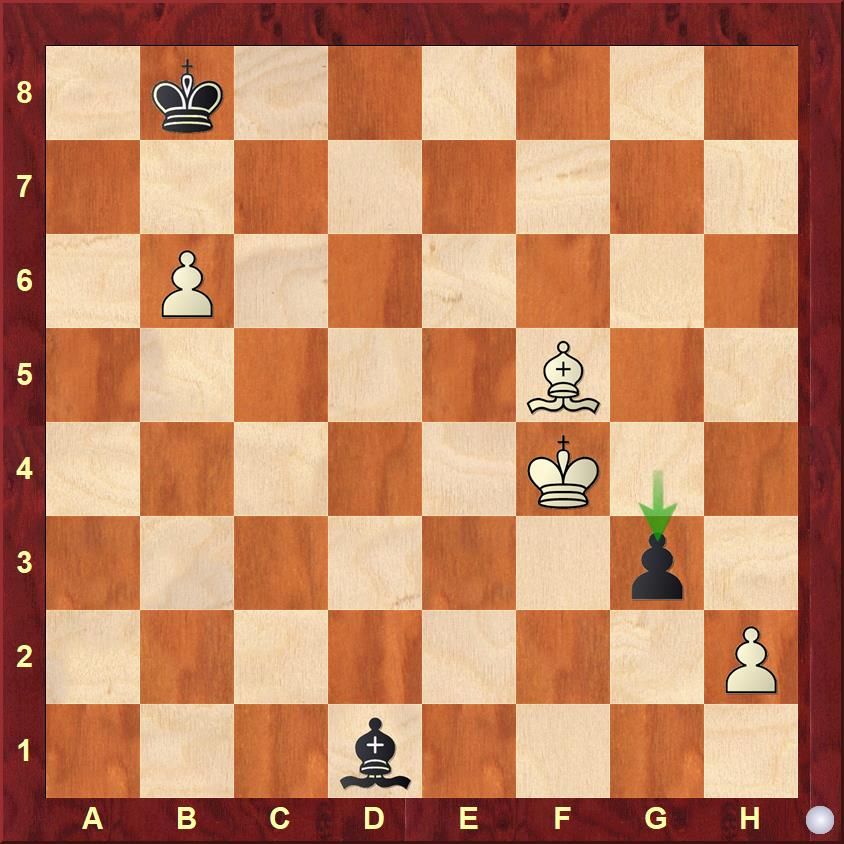 ...g3 is a very advanced example of a desperado!

This theme was very fresh in my mind, but somehow I still believed that I will be in time in that case. But if the computer says no, then obviously I'm wrong [smiles].

MC: Oh - obviously after ...g3 hxg3 Kxa7, I had seen Nd5 which is winning for White. But yeah, to realise that there's a massive difference between ...Nb6 and ...Nc7 is also not easy when you're short on time.

SS: Absolutely. In the last game, we could see that you wanted to find a win, but then you were like a draw is okay .

Now that's what a gentleman does. He needn't score a 3-0 win to the match, a 2.5-0.5 is a win too against Praggnanandhaa. | Photo: ChessBase India livestream

SS: Well Magnus, it's 4:30 AM in India, and everyone has loved watching you play. You're just crushing this event, and you won the Champions Chess Tour, so how's the feeling overall? 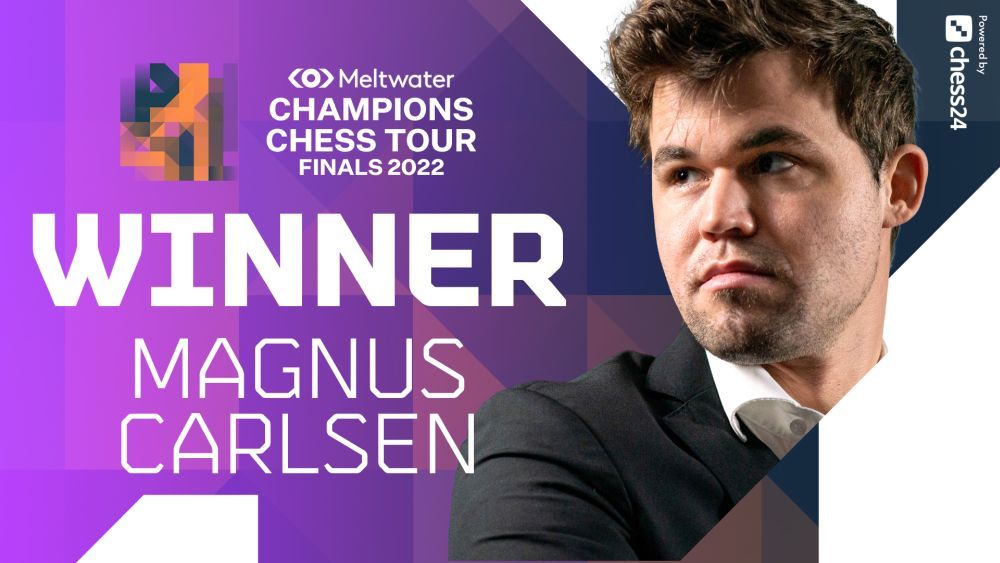 MC: I have to say that I'm sorry I couldn't keep the match going a little bit longer, because then people could've woken up in the morning to go watch the games [chuckles].

Magnus and Sagar having a laugh at 4:30 AM IST - this is something you don't get to see every day! | Pjhoto: ChessBase India livestream.

I love what you are doing Sagar, and to see all of the Indian talents and fans is amazing. So, huge shoutout to all of you!

SS: Thank you so much, we are looking forward to having you in India soon, whenever that happens. Take care, Magnus!

MC: Thank you! I enjoyed my time there this summer, hope to be back. Unfortunately now I've been travelling a bit too much, so I felt like I couldn't make it to Tata Steel Chess, but I'll be following it with great interest.

A big thank you to Harshil and Ayushi for arranging this interview from the venue in San Francisco. Without their amazing efforts, this interaction with the World Champion would've never been possible!