The year was 2013. Magnus Carlsen was about to play his first match against Viswanathan Anand, and he was knee-deep in preparation. One day, Magnus made a post on Facebook, sharing an endgame study set up on his board. He captioned the image " More preparation. White to move and win, shown from black's side."  A few days later when I was chatting with India's talented GM Vidit Gujarathi, he asked me if I had solved Carlsen's challenge which was extremely interesting. Dear reader, can you solve the Carlsen challenge?

This was the Facebook post that Carlsen made on August 2nd, 2013, roughly 3 months before his first World Championship.

Here is a better board version of the problem. The composers of this endgame study are V. Katnelson and L.Katnelson.

White to play and win. Can you solve it?

To tell you the truth, I spent quite a lot of effort on solving this one! Here you can see me trying it on the board.

But my main efforts were made when I was jogging or traveling. The fact that there were just 8 pieces on the board meant that it was possible to try to go into complications blindfolded. But the problem was not the number of pieces but the nice interweaving of ideas! I would ask all those who have not solved this puzzle to not look at the answer before giving it a shot. After all, the depth of the problem can only be understood if you have tried solving it. Otherwise, everything seems just so easy! 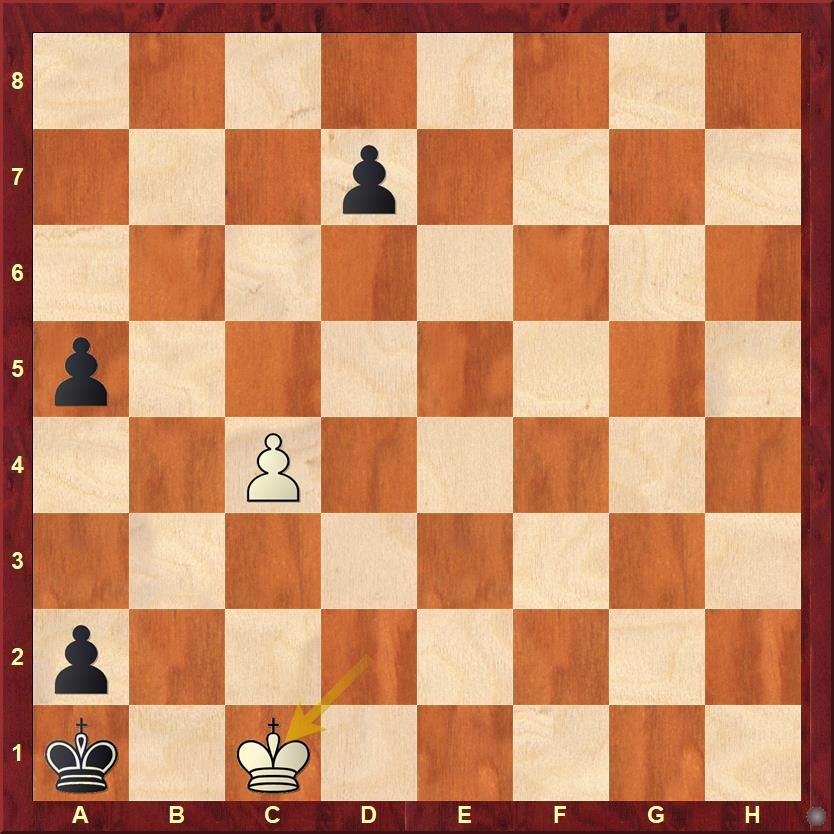 Position after 7.Kc1 in the aforementioned variation.

White has stalemated the Black king in the corner, and now only pawn moves remain. But Black turns out to be a tricky person to deal with, as he stops the c-pawn right in its tracks with 7...d6! After this white just cannot win. 8.Kc2 a4 9.Kc1 a3 10.Kc2 d5 11.cxd5 and now it's a draw by stalemate. 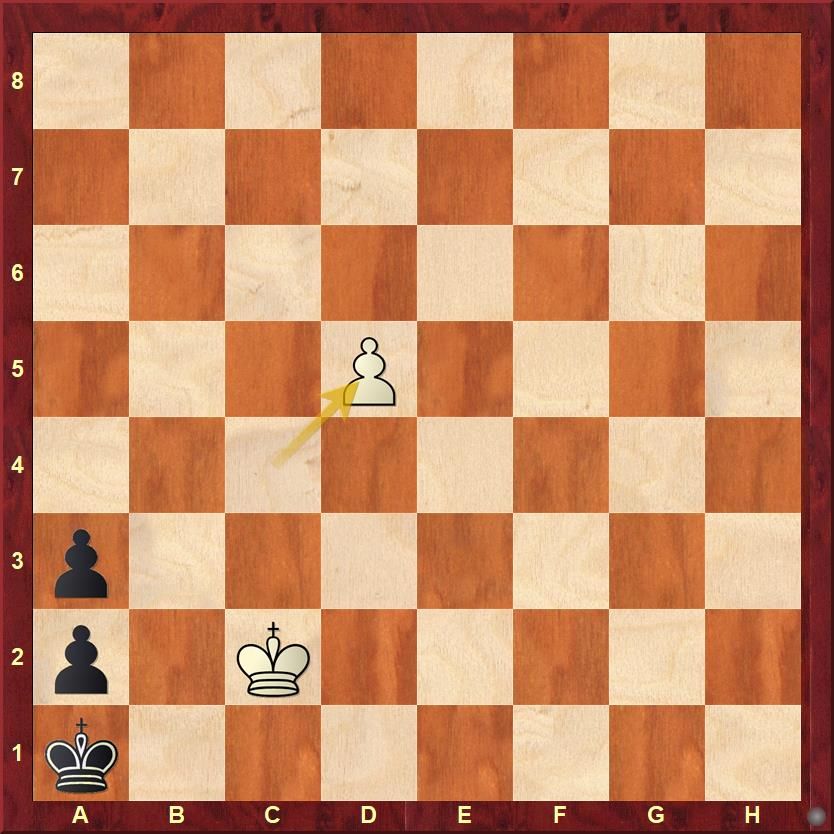 Position after 11.cxd5 - a draw by stalemate.

However, this was a start! Many of the players think that solving studies means trying to find flashy moves right from the go. I don't agree - you must always begin with the most natural continuation, and from that variation gain ideas and understand why your move doesn't work, and then come up with the improved version of the answer. It's like developing an app. You develop an application, then you see the problems and fix the bugs. Then again, you develop the app further and fix the bugs. It's a continuous process till perfection is achieved.

So, let's go back to the starting position. We have already learned a few things:

1. Cutting off the Black King can be a great idea.

2. We will have to give up the rook, but sacrificing it in such a way that the Black king will be stalemated is the key idea.

3. We need our pawn on c5 so that in the position of stalemate, our pawn will be one step closer to queening.

It's from all these deductions that we come up with the idea of 1.Re4!! 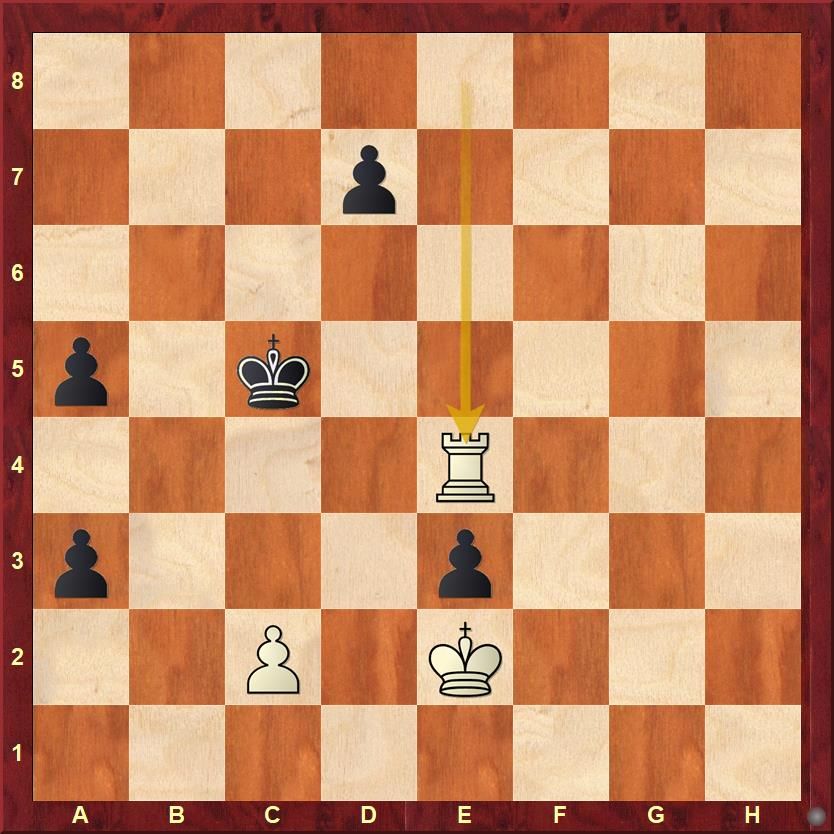 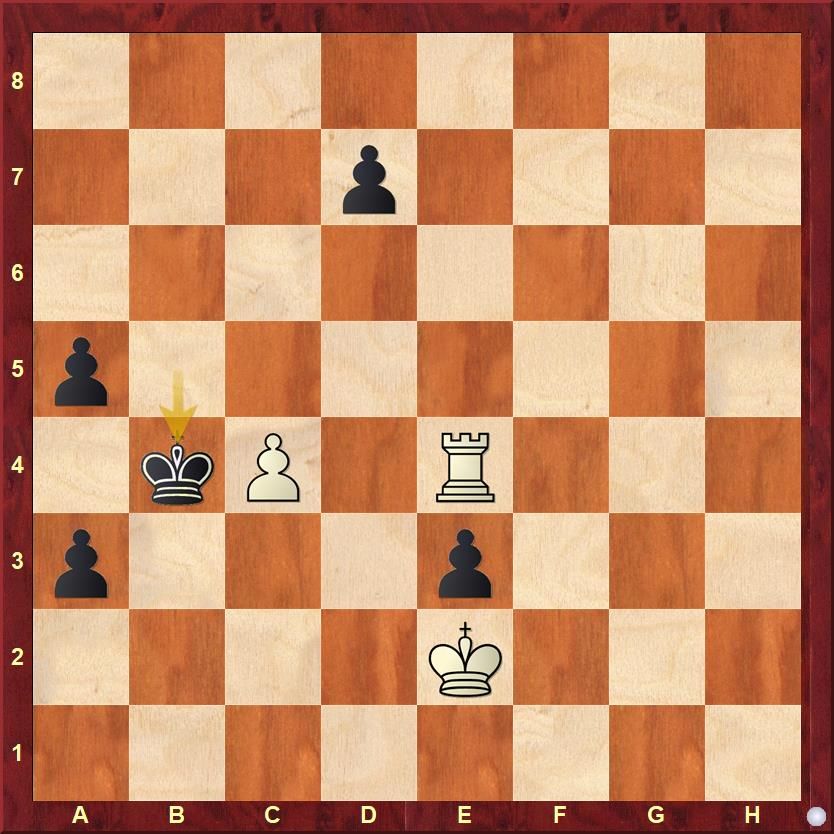 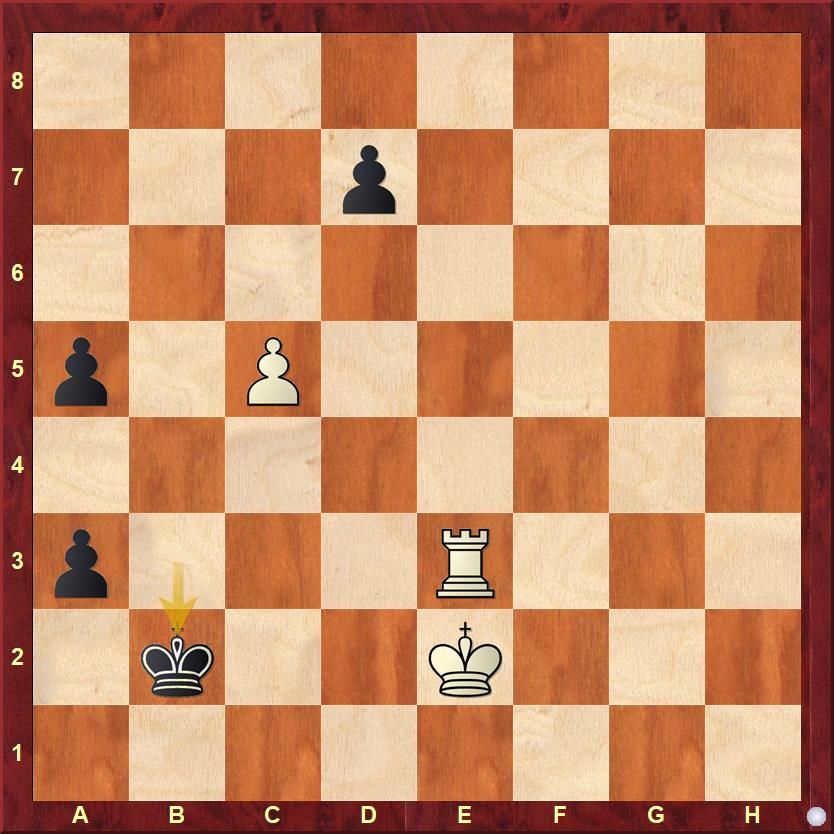 Position after 4...Kb2. This is the critical moment, what do you do as White?

White has to come up with two consecutive strong moves now. The first one is 5.Kd3! the main idea of this move is to keep the second rank free for the rook to check. 5...a2 and now it's time for 6.Re2+!! 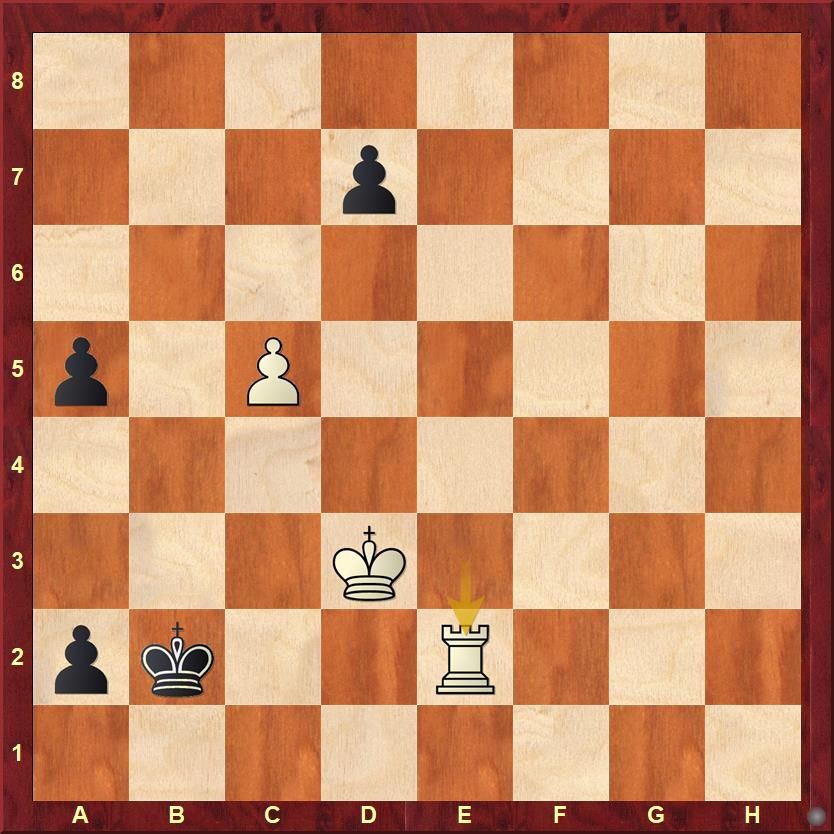 This was really one of the toughest moves to think about in this study. The idea of the Rook check becomes clear once you see it. The rook would like to come to the first rank, but it wants to come without losing time. Usually, we see such time gaining vertical checks in Rook vs pawn endings. Here is a case of horizontal check! After this, White gets two favourable things. He is able to set up a stalemate of the Black king, and he has already got his pawn on 5th rank i.e c5. 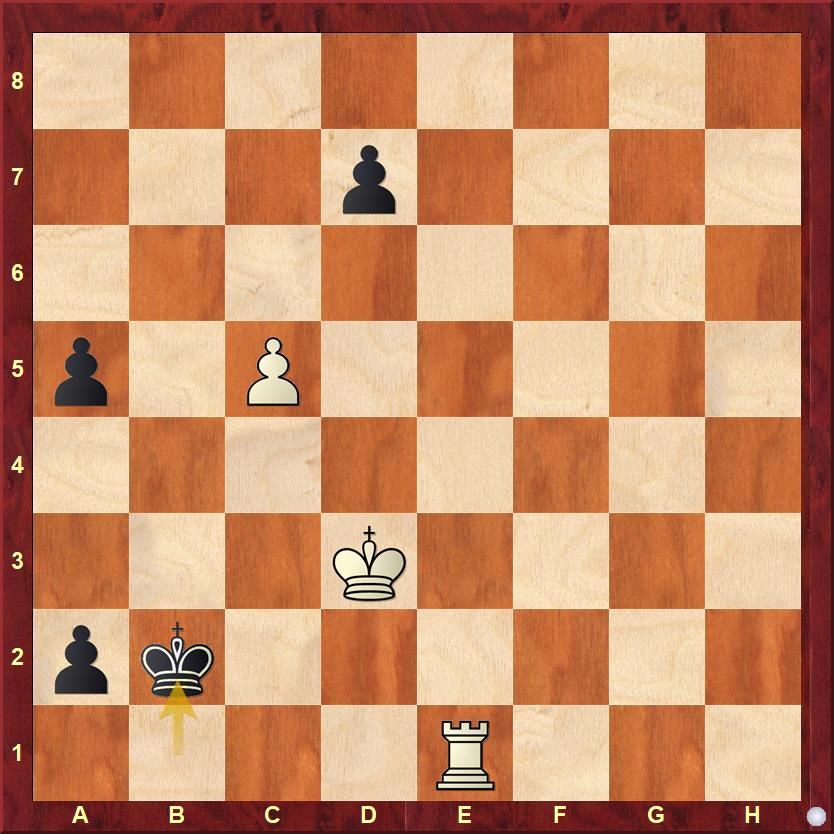 Maybe for a trained eye, the next move is not so difficult. But nonetheless, it is beautiful!

White plays the nice move 8.Ra1! Black can now push his a-pawn, but it will not change anything. Once the Rook is taken with 8...Kxa1, White stalemates the king with 9.Kc2. Black has 2 ways to play now - one is to push his pawn to a4, and another is to first push his d-pawn. Try to work out up to mate in both the variations. 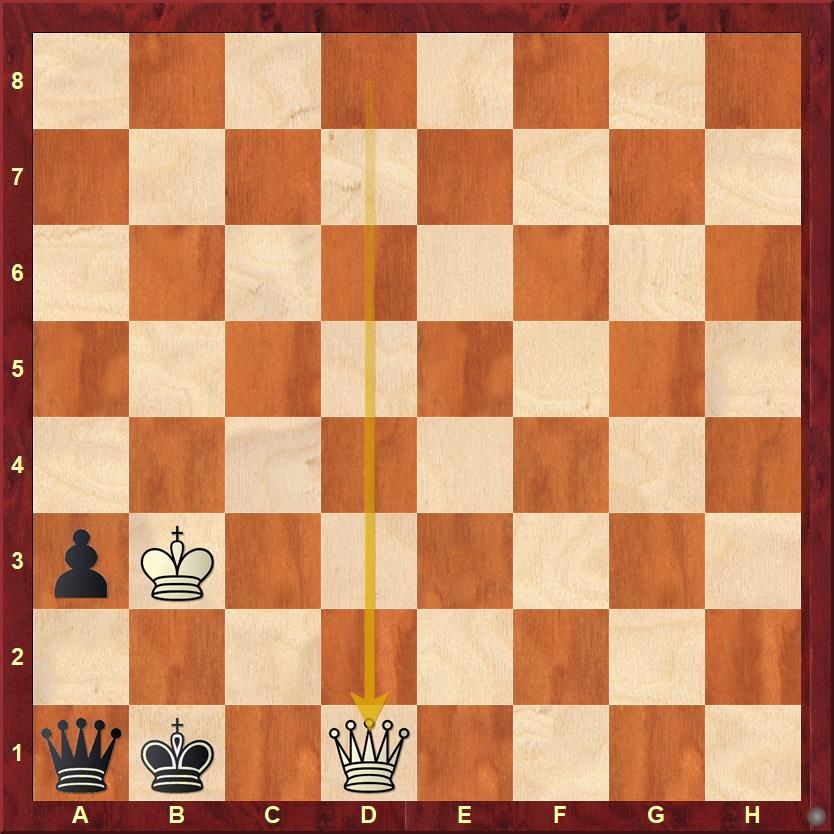 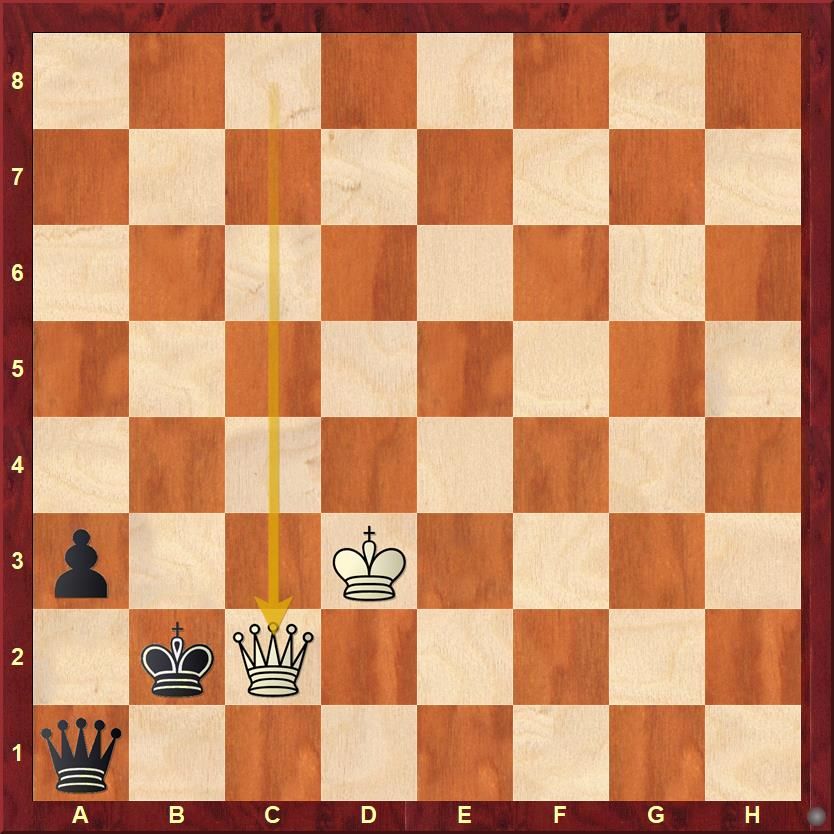 A beautiful mate. A small detail to notice is that if the pawn were not on a3, it would not have been a mate!

I am sure those who tried to solve this study found it not so easy. It was tough. But the tougher the battle, the sweeter the victory.

I was extremely happy after I solved this study. I hope you too enjoyed trying to solve this problem and looking through the answer!