A day after winning the Meltwater Champions Chess Tour Julius Baer Generation Cup in a dominating fashion, Magnus Carlsen has tweeted a public statement. Not only the chess universe, but the entire world is talking about the Sinquefield Cup withdrawal, Carlsen's refusal to play against Niemann at the Generation Cup. Everyone knows that Carlsen loves to play chess, he does not say or take rash decisions. He has finally issued a public statement. There are still some things he cannot say without Niemann's explicit permission, as he mentioned in the statement. The chess universe is split, many have taken Carlsen's side, while some feel Niemann is innocent. What is your opinion in this matter?

At the 2022 Sinquefield Cup, I made the unprecedented professional decision to withdraw from the tournament after my round three game against Hans Niemann. A week later during the Champions Chess Tour, I resigned against Hans Niemann after playing only one move.

I believe that cheating in chess is a big deal and an existential threat to the game. I also believe that chess organizers and all those who care about the sanctity of the game we love should seriously consider increasing security measures and methods of cheat detection for over the board chess. When Niemann was invited last minute to the 2022 Sinquefield Cup, I strongly considered withdrawing prior to the event. I ultimate chose to play.

I believe that Niemann has cheated more - and more recently - than he has publicly admitted. His over the board progress has been unusual, and throughout our game in the Sinquefield Cup I had the impression that he wasn't tense or even fully concentrating on the game in the critical positions, while outplaying me as black in a way I think only a handful of players can do. This game contributed to changing my perspective.

We must do something about cheating, and for my part going forward, I don't want to play against people that have cheated repeatedly in the past, because I don't know what they are capable of doing in the future.

There is more that I would like to say. Unfortunately, at this time I am limited in what I can say without explicit permission from Niemann to speak openly. So far I have only been able to speak with my actions, and those actions have stated clearly that I am not willing to play chess with Niemann. I hope that the truth on this matter comes out, whatever it may be. 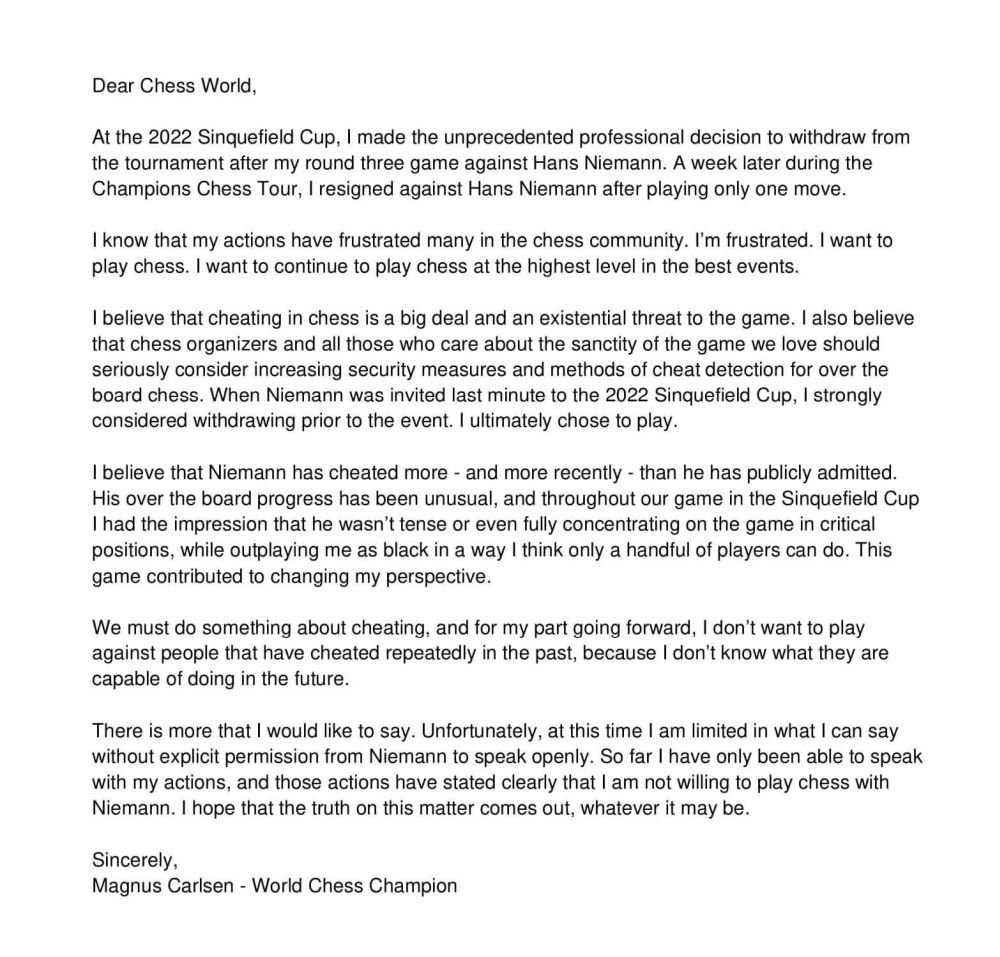