Top seed of the tournament, Ajith MP started the tournament with eight consecutive victories. He lost the last round game against Advait Ratnakar Vibhute. However, that did not deter his championship chances. Ajith, Advait, Abhyuday Santosh and Anirudh Gosakan scored 8/9 each. Ajith won 3rd ICA Rapid Rating Open 2022. The remaining three were placed second to fourth according to tie-breaks. One of the unique element about this tournament iss a low entry fee of ₹250. This is to encourage maximum participation of players. The organizer Innovators Chess Academy was certainly successful in it as 315 players participated from all over the country. Photo: Sushruta Reddy

Pizza party for the prize winners

Innovators Chess Academy is well-known for bringing innovation to their tournaments. On 7th August 2022, they held a one-day Rapid Rating tournament at Silicon City Academy of Secondary Education. The founder of the academy, FI NA Sushruta Reddy also participated and scored 7.5/9 to secure sixth position. Apart from a low entry fee the other unique element of the tournament was, ICA mentioned , "All Prize winners were invited to the Pizza party soon after the Prize Distribution".

This is Ajith's first triumph of the year. What an amazing way he won! 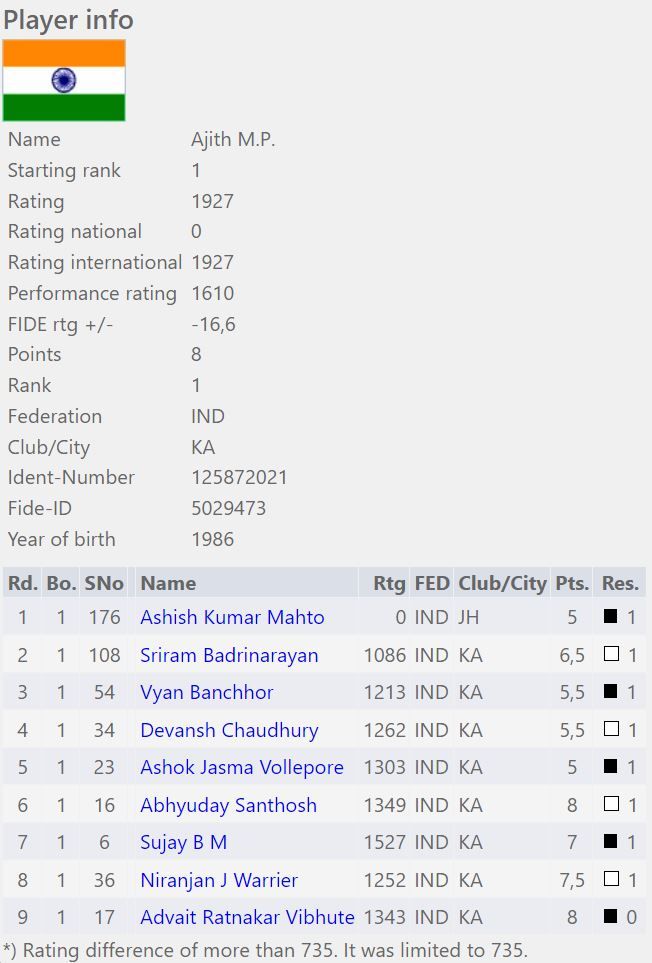 There were no cash prize. The top five were awarded trophies and the entire top ten finishers received a merit certificate. Apart from the main prizes, Under-7, 9, 11 and 13 Boys and Girls, each age group category had medals and certificates for the top three finishers.

A total of 315 players took part from various parts of the country. The one-day nine-round Swiss league Rapid Rating tournament was organized by Innovators Chess Academy at Silicon City Academy of Secondary Education on 7th August 2022. The time control of the tournament was 10 minutes + 5 seconds increment from move no.1.