When it came to GMs Karnataka had none until 2017. Now they have three. Recently they got their first WIM as well. Things are changing in Karnataka chess, but the biggest strength of the state lies in its youngsters. The number of students in schools who have taken up chess is huge! That's the reason why when the state schools championships was held in Bengaluru on the 16th of November 2019, a one-day event, you saw participation of as many as 534 youngsters! The National Schools held every year, boasts of around 1000 participants. Karnataka already has half the number in its own state! Read this article by Hinduja Reddy to know who were the winners at the event and also know more about the organizers and sponsors. This article also tells you why Karnataka chess is booming in a big way!

Schools across Karnataka were invited to join a huge chess championship in the center of Bengaluru city. At two in the morning, the organizers started to set up nearly 300 boards. Few hours later, at 09.30, the students sat down, all set to begin their games. The auditorium was so quiet you could "hear a pin drop", according to a parent who brought her son to the Karnataka State Schools Championship. 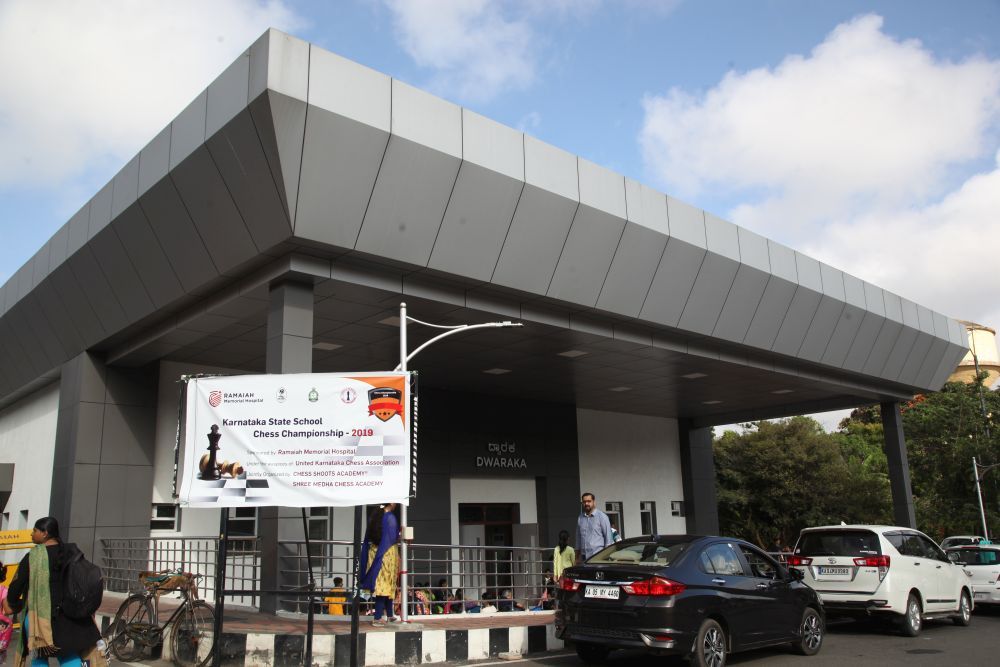 Dwarka auditorium - the venue of the event from outside... And the playing hall bustling with chess activity from inside! 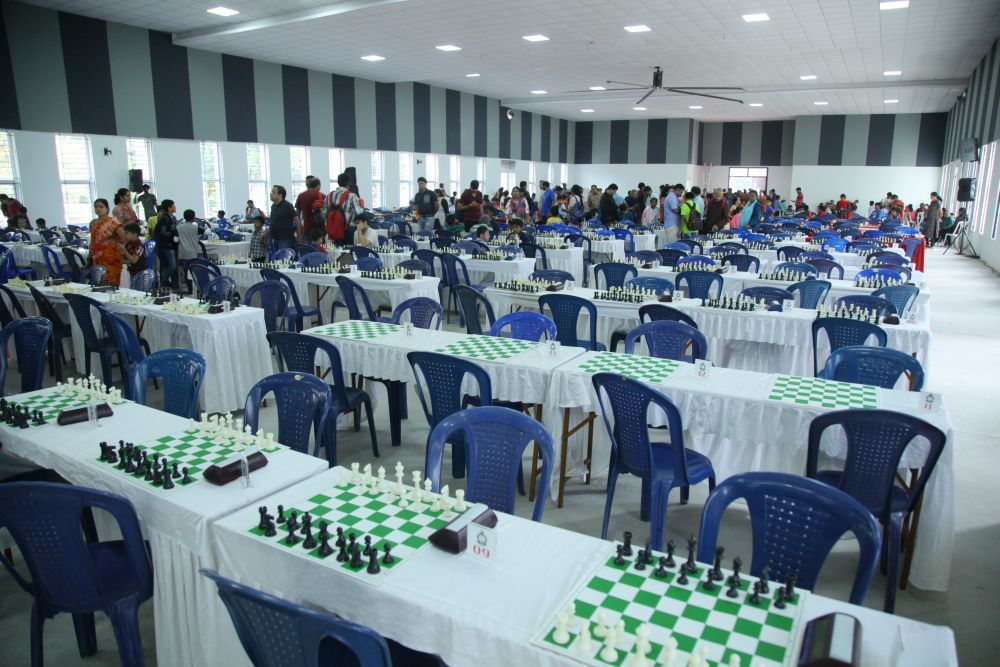 But before the rounds began everything was meticulously arranged well in advance. 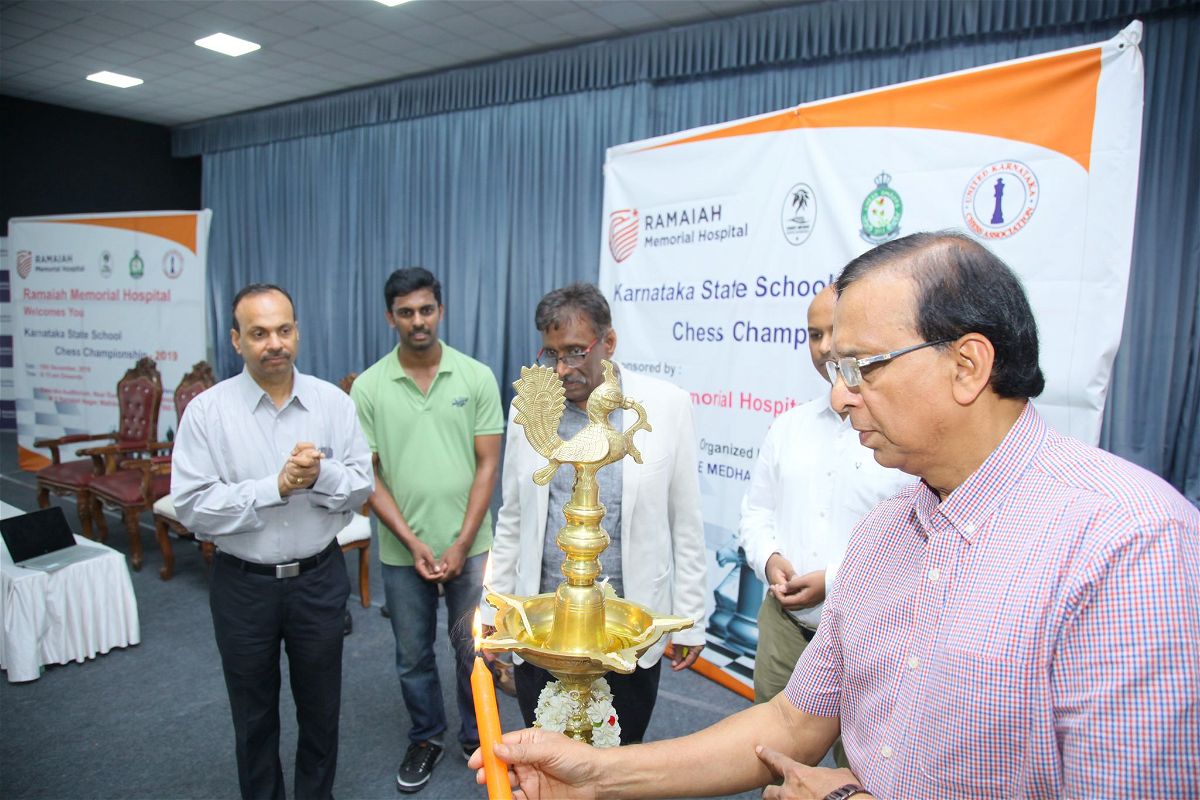 And the event started off with a lively and colourful opening ceremony...

Boys and girls fought it out on the chessboard for top places in the event. And after the day-long contest, winners were given prizes. Cash prizes were awarded for top 3 finishers, and five trophies were given away for boys and girls in each category. Mr. Hanumantha.R, General Secretary UKCA & Joint Secretary of AICF; Dr. Muralidhar, Vice-President UKCA; and Mr. Shreekanth, founder-Shree Medha Chess Academy, in the presence of Chief Arbiter Vasanth BH gave away prizes to the top winners. Congratulating the winners, Hanumantha said that it was heartening to see so many children participating in the event. He expressed his gratitude to the parents, sponsors, and arbiters for making the event a grand success. 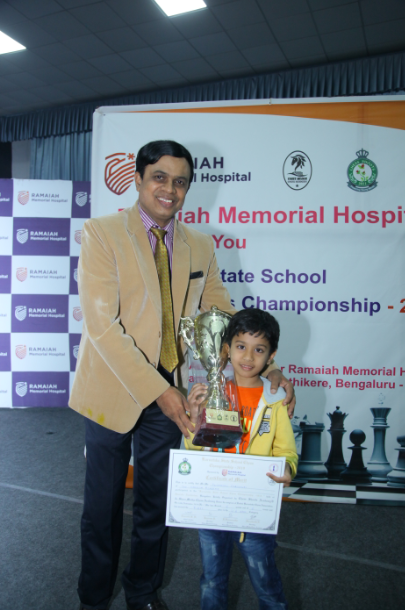 Priyanshu Choudhuri became the champion in the under-6 open section scoring an unbeaten 6.0/6 points and finishing a full point ahead of the field. 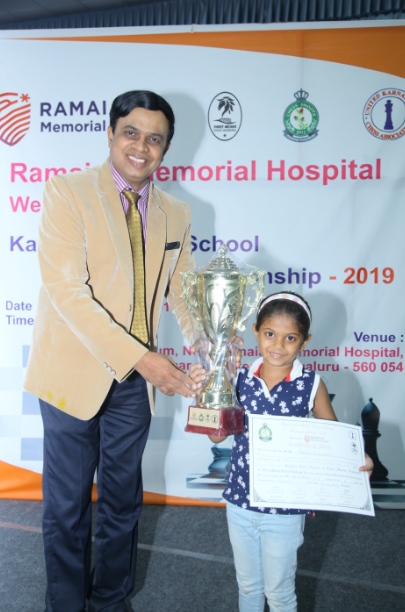 In under-6 girls it was Aadya Ranganath who clinched the championship scoring 5.5/6 points. 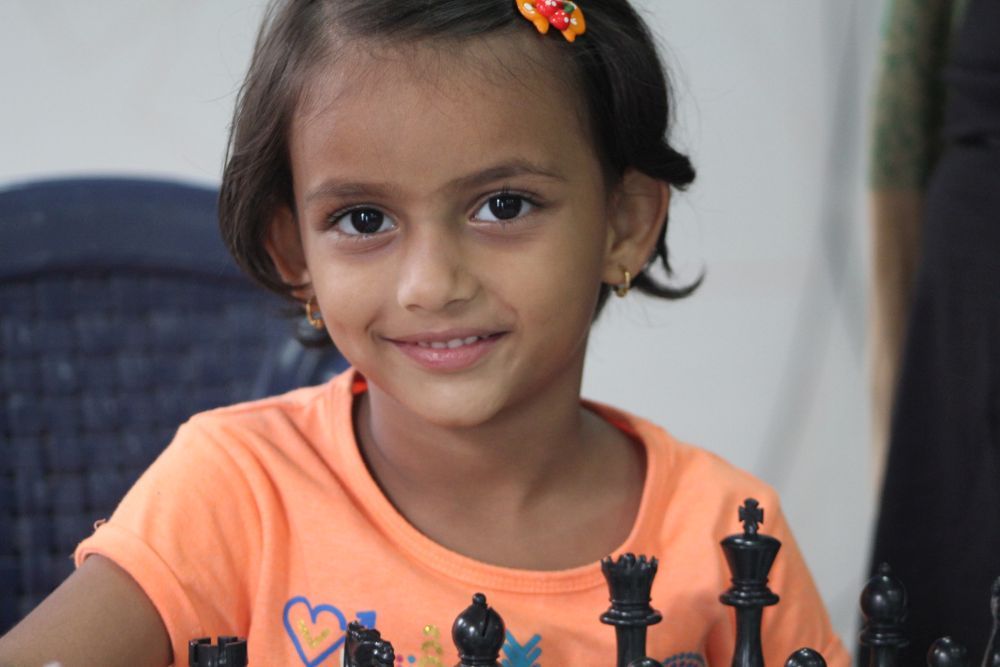 Four-year-old Suprajna S. Jain who also played in the under-6 category was from Mandya district. She won the prize for the youngest participant in the championship. 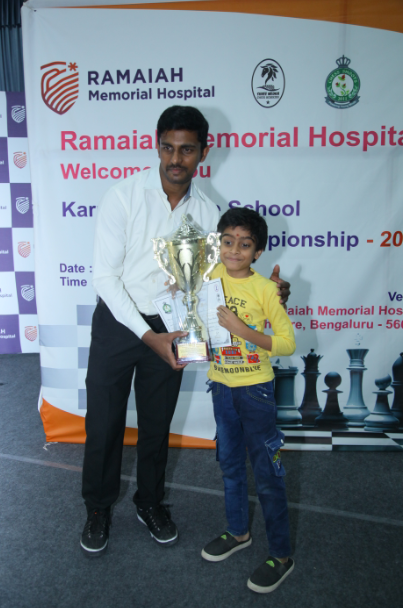 Yuvanesh A took the first place in under-8 open 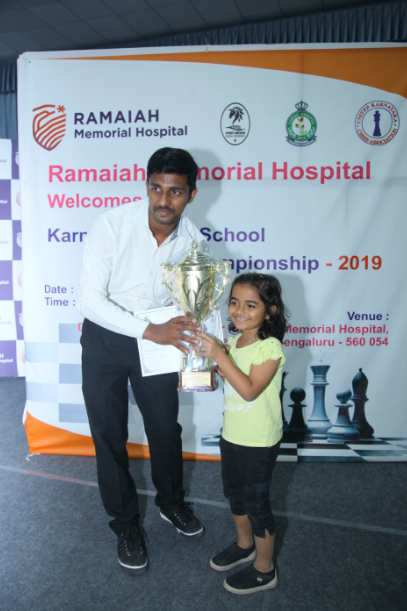 While Rudra Rajeev became champion of under-8 girls 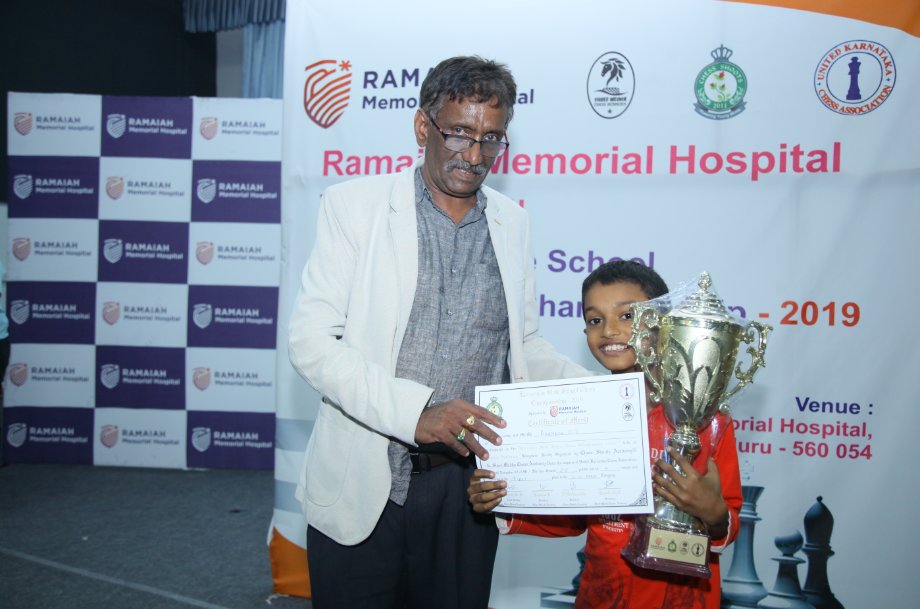 Meanwhile, the winner in the under-10 Open was Akanksh U D. 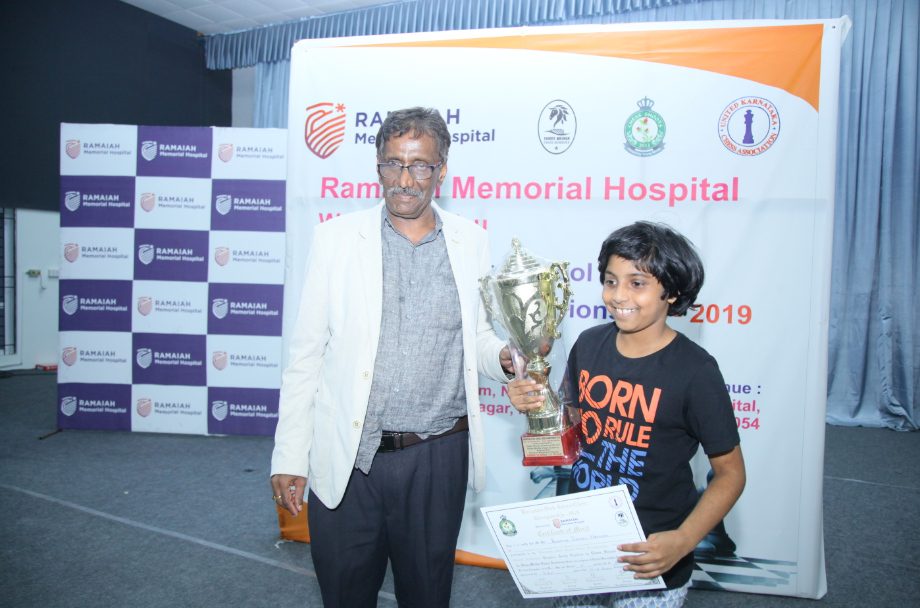 Avantika Banujit Narayan took the title in under-10 girls category. 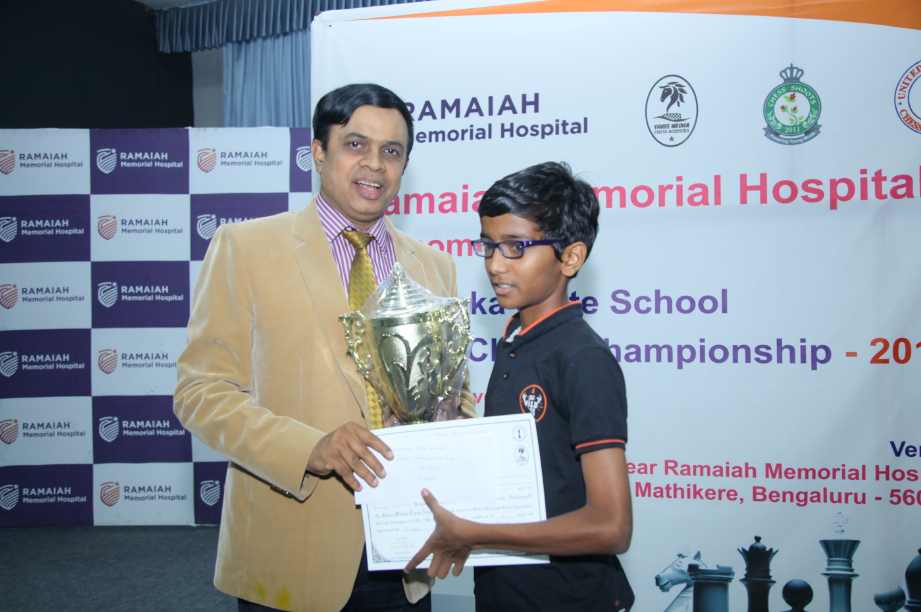 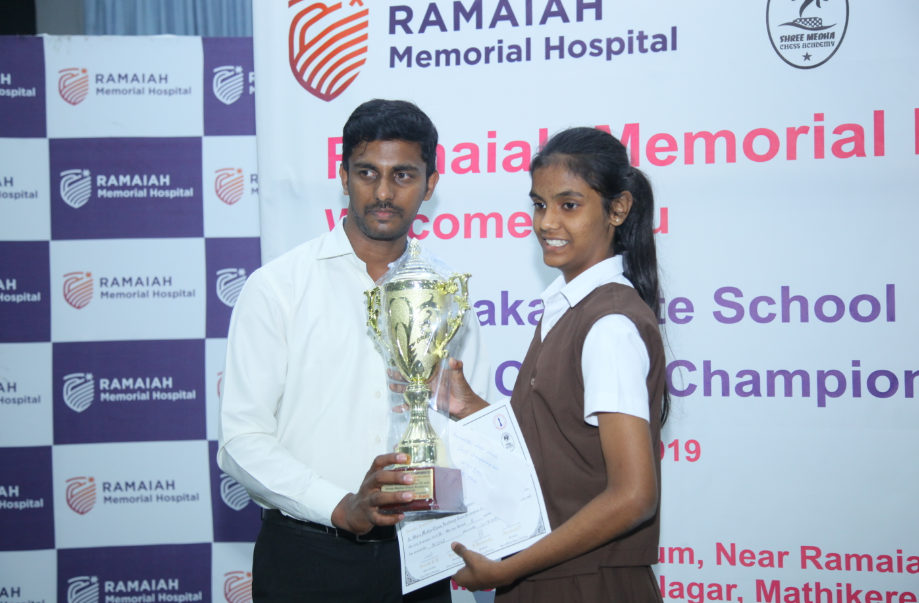 While Eshanvi MN became the under-12 girls champion 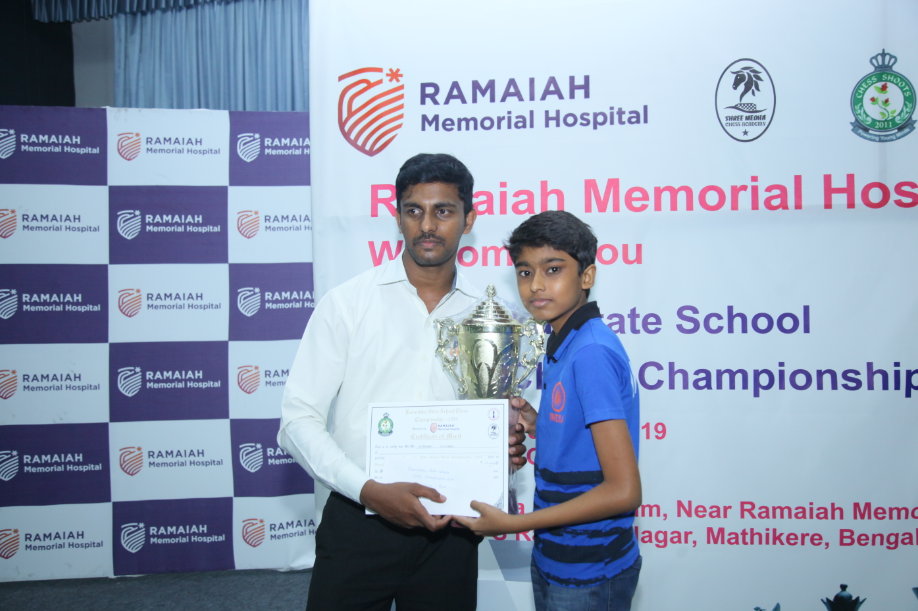 In under-14 open Rishabh Kumara became the champion 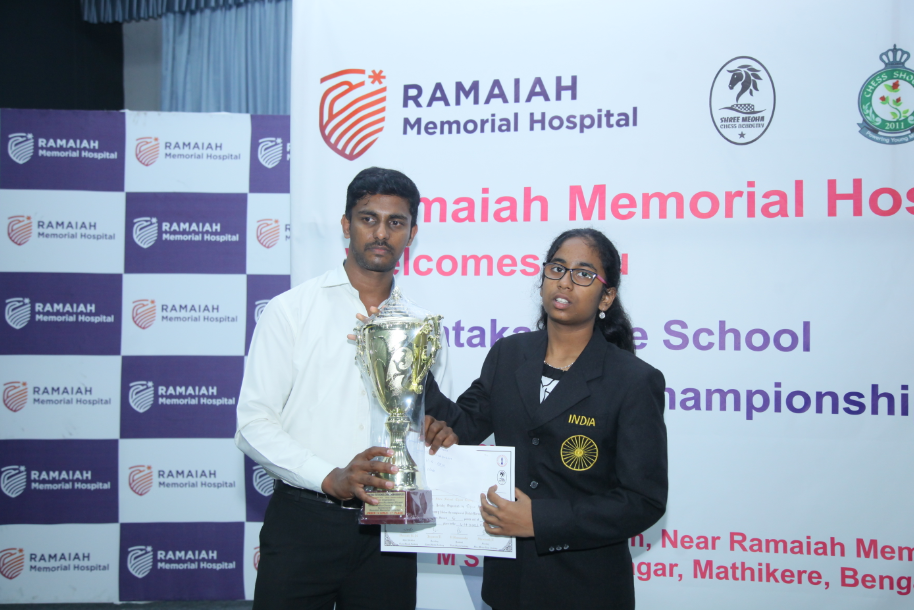 And in the under-14 girls it was Renganayaki V 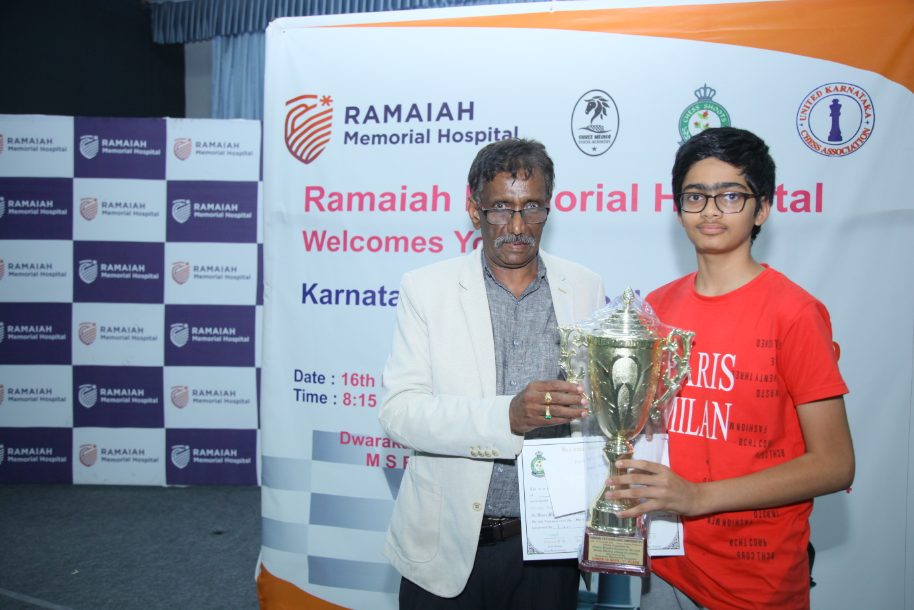 Rakshith Srinivasan won in the under-16 open group 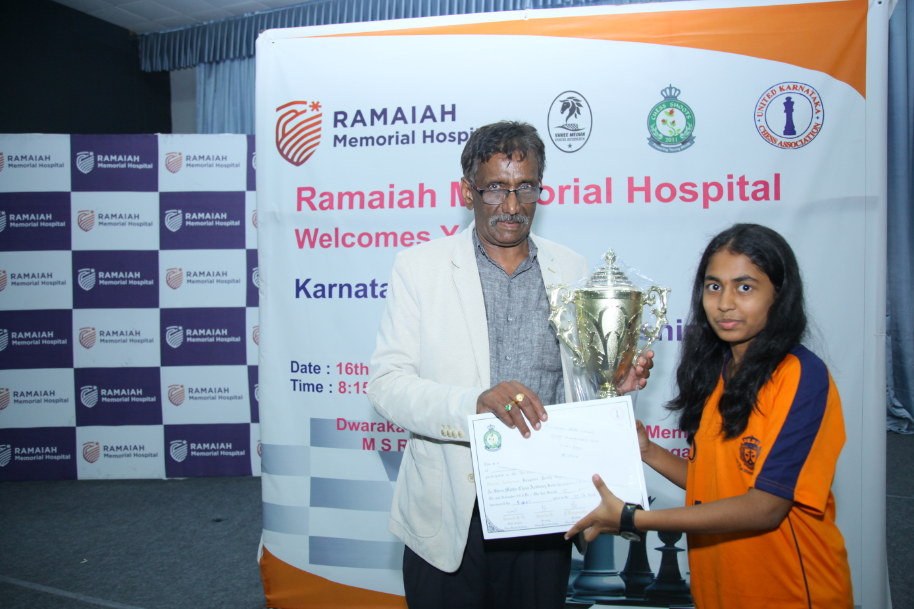 And Harshini A became the under-16 girls champion 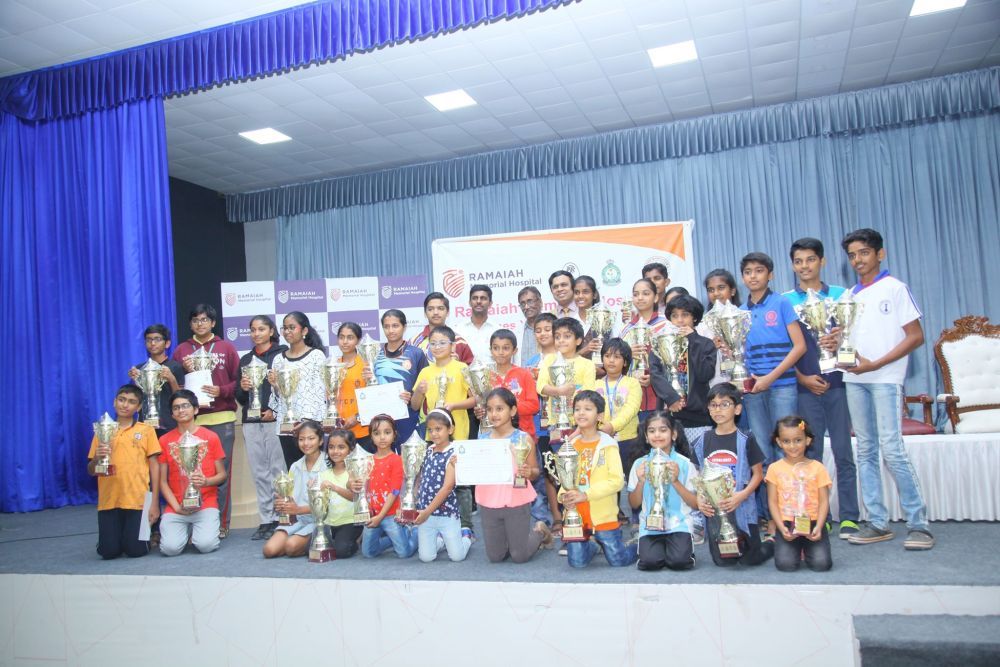 The winners in one frame!

Hanumantha R. started playing chess at the age of 21. The same year, he had represented his employer LIC in a National level championship during 1981.  Following a good performance, he was qualified to play abroad in Bangkok—first of many to achieve such a feat in Karnataka. Later in 1992, he dabbled as an organizer by conducting monthly tournaments, in memory of his father. Having conducted more than 100 tournaments, in last two decades, led to the inception of present-day chess culture in the state.  From less than a hundred FIDE rated players, the list grew over thousand - snowballing whole new players, coaches and in turn - whole new organizers. Hanumantha was instrumental in setting up the United Karnataka Chess Association (UKCA), the state body for the game. Since 2006, he assumed various roles in the UKCA. He also serves as Joint Secretary of All India Chess Federation.

Jayaram Ramanna, the nephew of Hanumantha R, is an alumnus of Swinburne University of Technology, Melbourne and an engineer of  RVCE, Bangalore. He was working as a Senior Design Engineer in Volvo before he decided to take a path not so mainstream. In 2011, he partnered with his uncle and founded Chess Shoots Academy (formerly known as C.V.Raman Academy).  A connoisseur of the game. His chess library boasts a collection of staggering 700 books. His most notable students’ list includes Pranav Anand, Shefali A.N, Ayush Yajaman, Abhyuday Santhosh, Rakshit Srinivasan, Siddhi Rao, Arhan Chetan Anand, Ananya Arumbakkam, Karthikeyan C, Aryan Jain, Aarvi Jain, Sachit Katti, Renganayaki V. Sathvik Adiga and Tejas Suresh Kumar.

New Organizer in the city

Shreekanth N is an Accountant by Profession, and chess lover at heart. He is the accounts officer at the Ramaiah Memorial Hospital. In January 2016, he traveled to play in the Delhi Chess Festival. Inspired by the colossal scale of the event, he envisioned to conduct a Grandmaster tournament, on par with the Delhi Chess Festival, in his home city. This year, he approached Chess Shoots Academy and is actively working to make his dream come true. This championship marks as the milestone for many more tournaments to come! 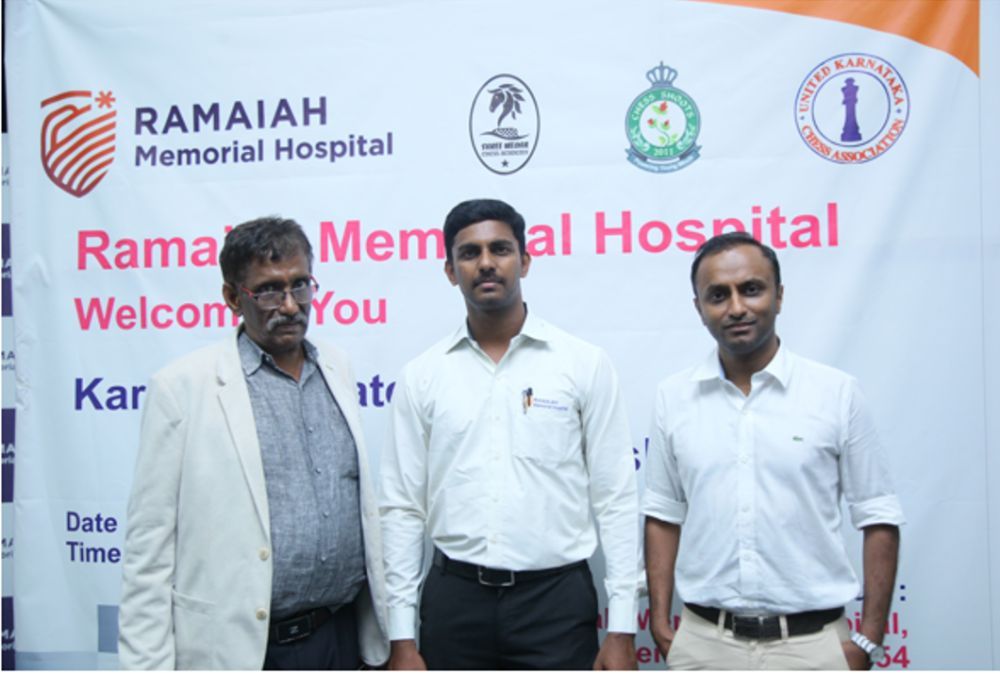 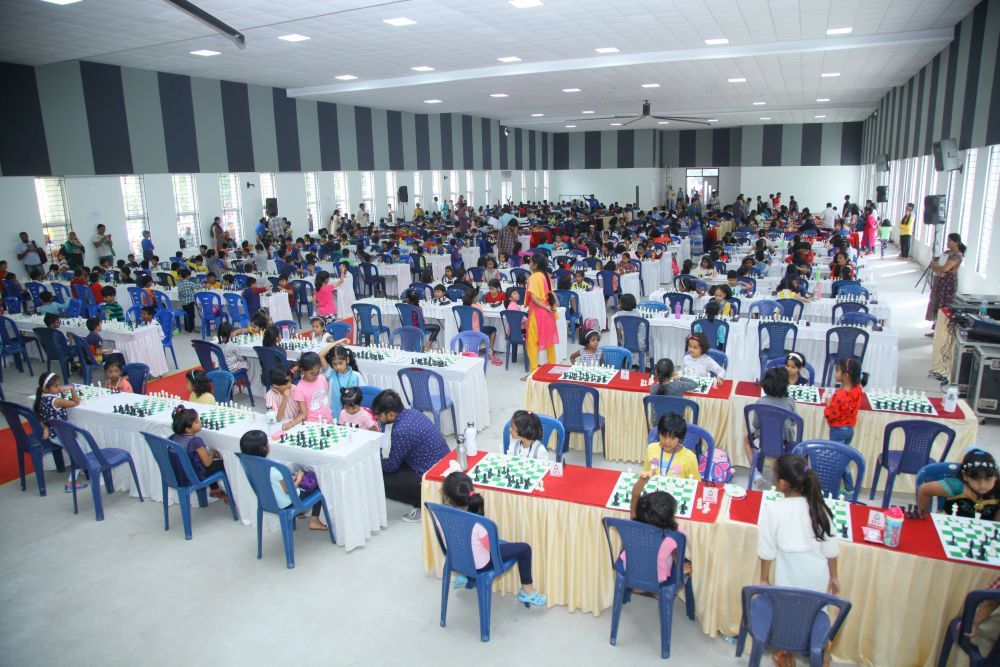 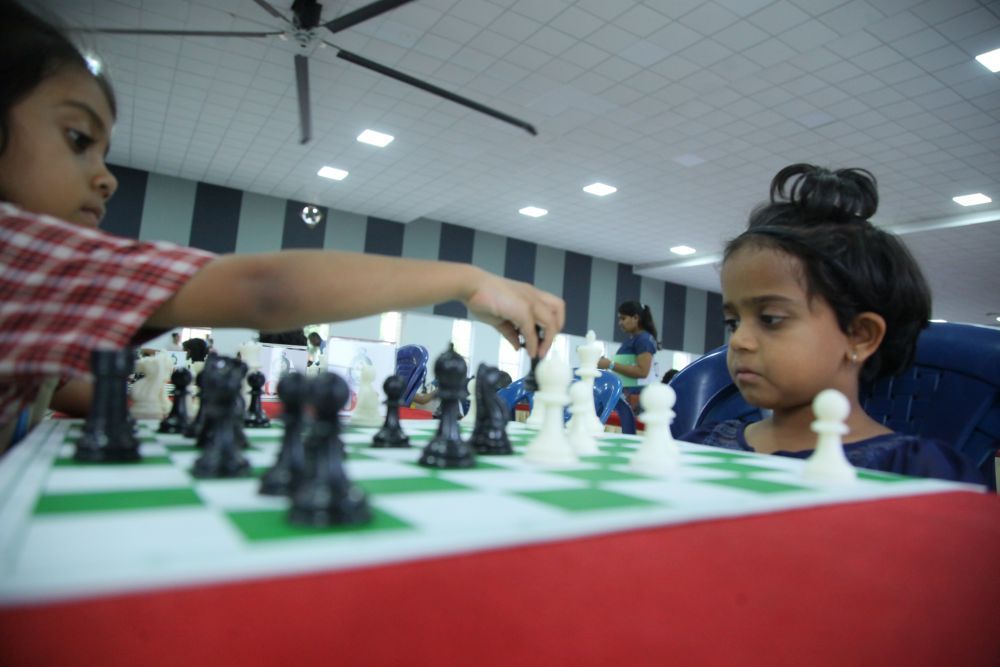 They might be tiny but they are mighty when it comes to making moves on the chessboard! 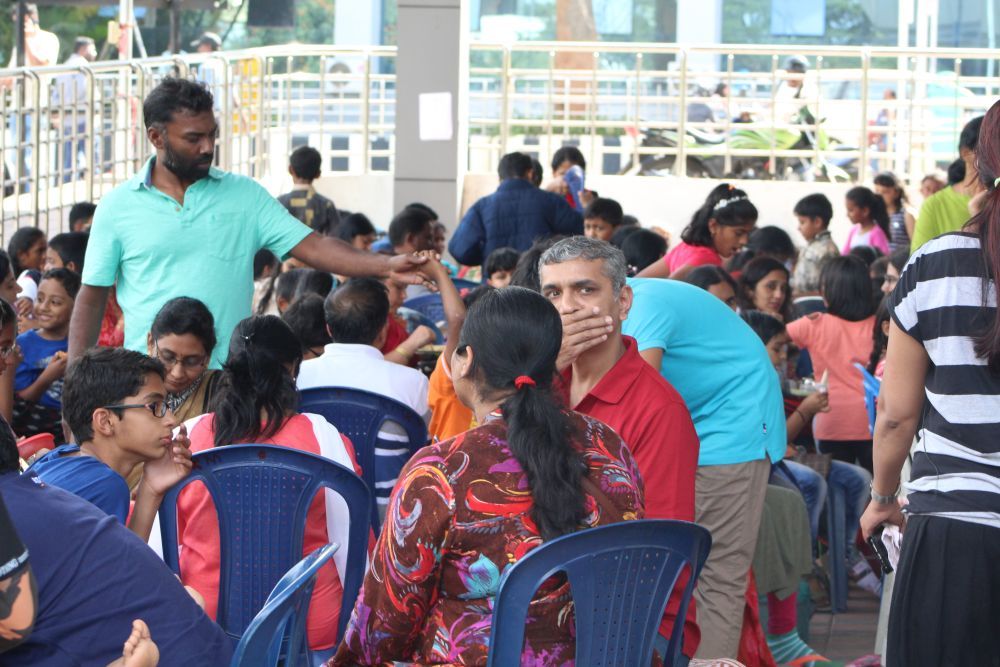 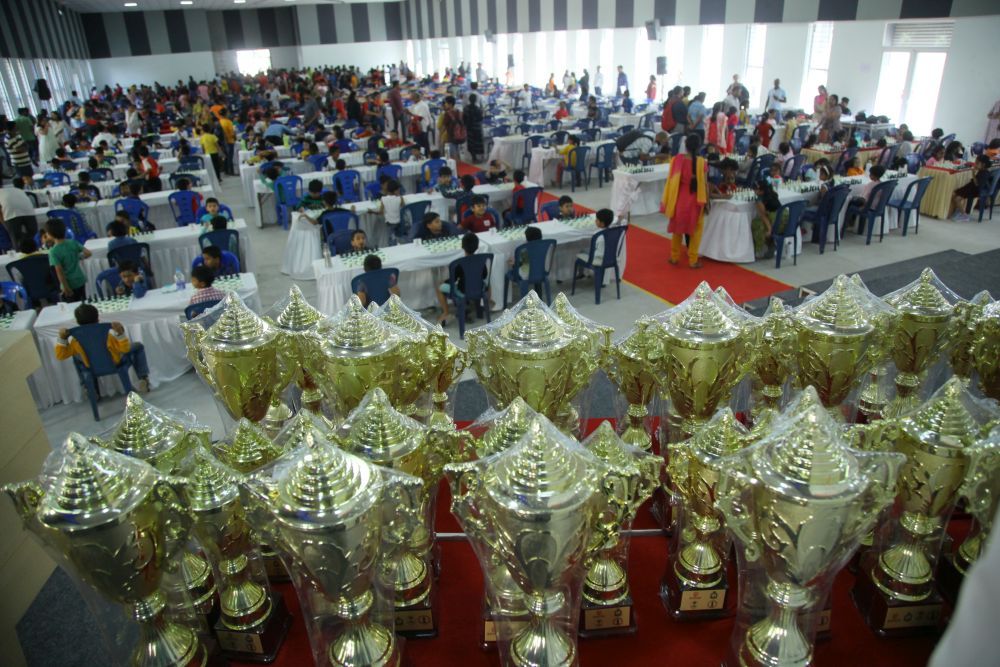 The shining trophies at stake! 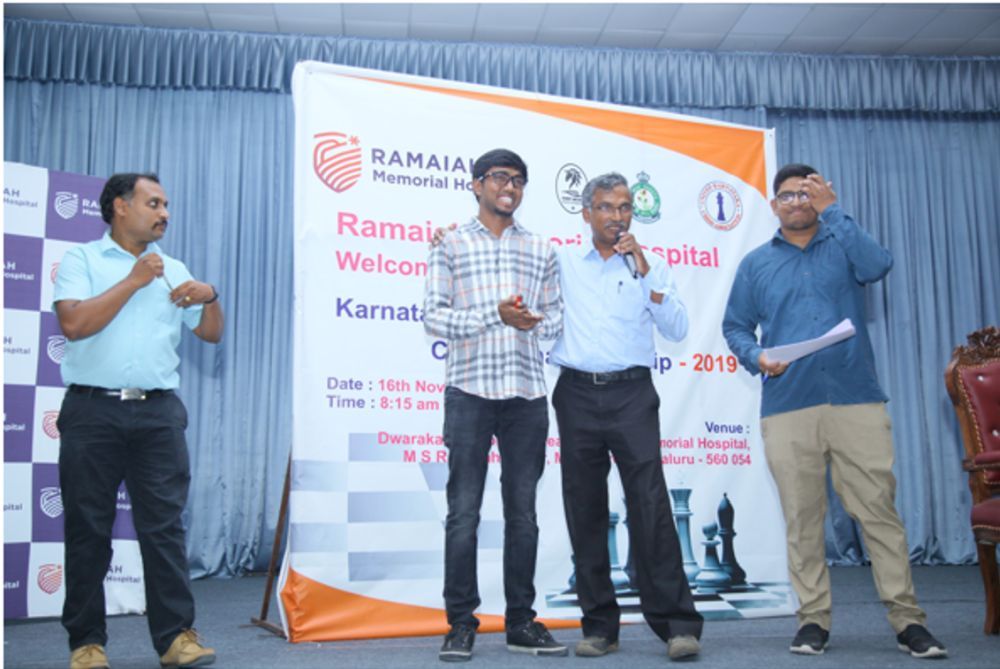 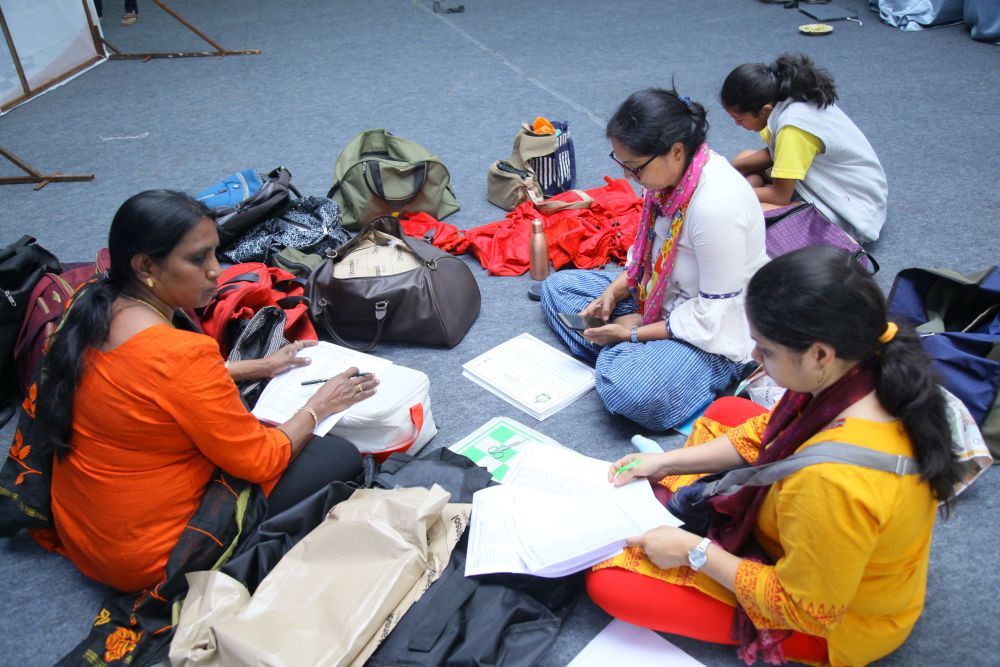 Behind-the-scenes: The volunteers were working hard...

Hinduja Reddy is a 24-year-old Chess Entrepreneur who lives in Bengaluru. She is a former National Women's B bronze medalist, chess writer, coach and co-founder of ChessMine events.