Recently in a video published on ChessBase India entitled "Fireside chat with Vishy Anand", Vishy was asked - "What would be your strategy for the coming qualification cycle?" To which Anand replied, "My route is fairly narrow in the sense that I have to play the World Cup and qualify. The second route is narrower and that is via rating. I would have to gain at least 30 points and that too pretty fast, because it is based on monthly averages!" What Anand didn't know at that point is that FIDE would come up with another way of qualifying for the Candidates 2020 and it released this on the 10th of January 2019. One spot of qualification to the Candidates 2020 will be reduced via Rating criteria and the new FIDE Grand Swiss is announced. What is this about? Get to know all about it in the article below.

1. One spot via Runner-up at the Previous World Championship (Fabiano Caruana)

4. Two spots via Rating (two highest rated players, who have not qualified through other means)

Post 10th of January 2019, there is one major change in the qualification channels. One spot via Rating criteria (point 4) is reduced and FIDE has come up with FIDE Grand Swiss - a swiss tournament with 105 players in the world and the winner of that event will qualify for the Candidates 2020!

Who qualifies for the FIDE Grand Swiss?

One hundred (100) players qualify by their average rating. For the purpose of deciding the 100 qualifiers by rating, the average ELO from the twelve (12) standard FIDE rating lists from July 1st 2018 to June 1st 2019 is used. In addition, the following players get a direct entry:

• One qualifier from the ACP Tour based on standings as of June 1st 2019.

Who are the Indians who can qualify for this event?

If you have a look at the top 100 players list as on 1st of January 2019, you will see that six Indians - Anand, Harikrishna, Vidit, Adhiban, Sasikiran and Sethuraman have excellent chances of qualifying for the FIDE Swiss Grand. Parimarjan Negi could also make it to the list, if he wishes to participate. The only other Indian who has a decent chance if he pumps up his rating quickly, is Surya Sekhar Ganguly, who is on 2638. But as already six months have passed by, his chances seem quite difficult. 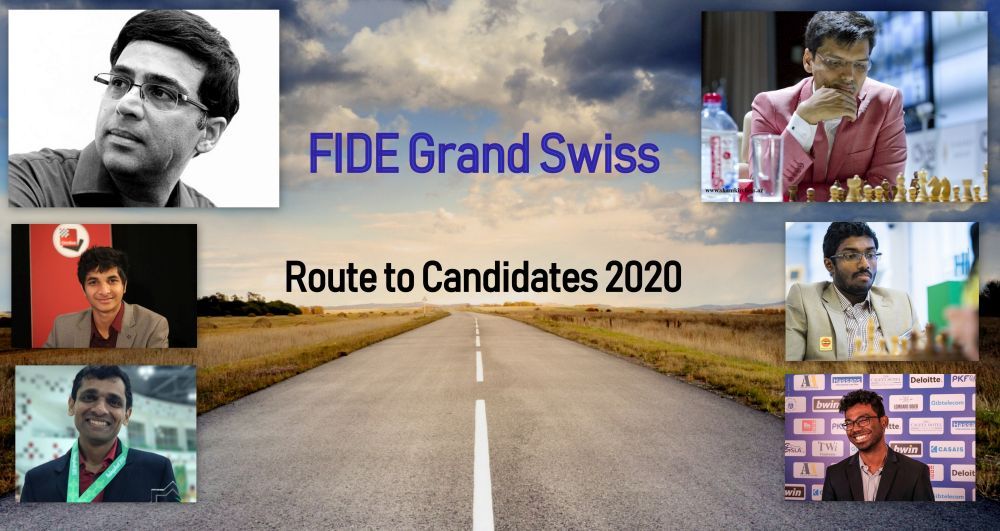 How does the FIDE Grand Swiss work?

Schedule of the event:

If the top two (2) or more players score the same points, the tie is to be decided by the following criteria, in order of priority:

The total minimum prize fund amounts to four hundred thousand (400,000) US dollars. The amount is net and cleared of any local taxes. The money prizes shall be allocated as follows (in US dollars):

Where will the FIDE Grand Swiss be held?

All those who are interested to organize the FIDE Grand Swiss should send their bids to office@fide.com before February 9, 2019.