When it comes to the mastery of traditional systems, Vishy Anand is truly second to none. In the sixth round of FIDE Chess.com Grand Swiss 2019 the Indian legend proved this once again by outplaying his young talented opponent Nodirbek Abdusattorov in the classical Ruy Lopez. The other major victory of the day was pulled off by Surya Sekhar Ganguly who made an emphatic comeback after previous round's defeat to beat the Georgian genius Baadur Jobava. Sethuraman S.P. and Gukesh D also registered important wins, while Harikrishna Pentala suffered an unfortunate loss in the hands of Vladislav Kovalev. Two players, Fabiano Caruana and Wang Hao, lead the event with 5.0/6 points each but there are seven players, including Magnus Carlsen, who are closely following them just half a point behind. We bring a detailed, illustrated report from Douglas, Isle of Man.

Vishy Anand's encounter against the 15-year-old Uzbekistani phenom Nodirbek Abdusattorov in the sixth round of ongoing Grand Swiss 2019 was the proverbial battle of experience and youth. In Chess it is never easy for a veteran to face such young opposition and there are two main reasons behind this. Firstly, a teenager is able to bring in a lot of energy and freshness over the board which most often than not an aged player will lack. And secondly, the ELO rating of an up-and-coming talent is never the true indicator of his/her actual strength. Interestingly, in this event itself, the strong Croatian Grandmaster Ivan Saric has faced players all below 16 years of age till round five and one can clearly see from his performance overview below that it has not been an altogether easy ride for him. 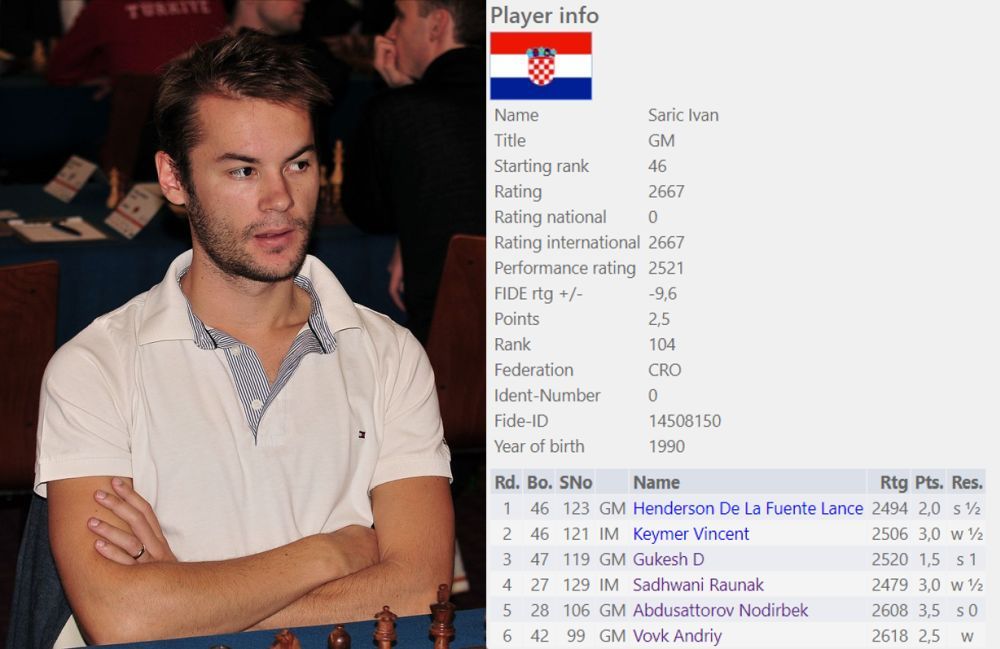 Ivan Saric is a former World Youth Champion who even holds a notable victory against Magnus Carlsen. He is 29-year-old but could manage to win only one game in the first five rounds against the under-16 opposition he faced! | Photo: Wikipedia

However, if there is one man who is consistently giving these rising youngsters a run for their money then it is none other than our very own Madras Tiger. At 49, Vishy Anand is still one of the strongest opponent to sit with across a chessboard. The World Champion Magnus Carlsen himself has said that he can still beat anyone in the World. Well, yesterday playing against the prodigiously talented Nodirbek Abdusattorov, Vishy only reinforced Carlsen's assertion. 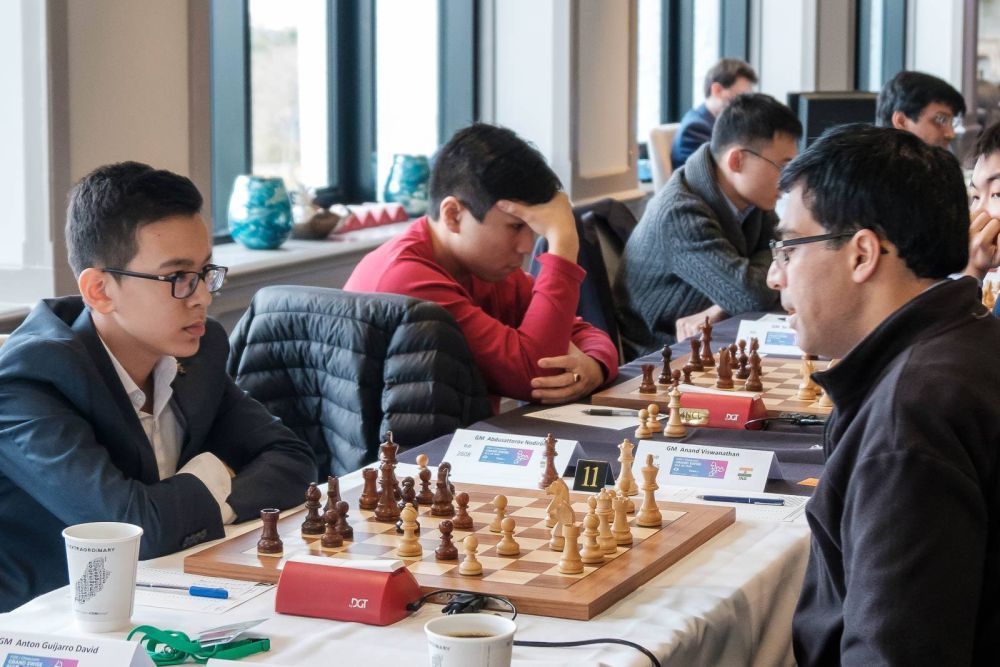 With his sixth round victory the five-time World Champion has moved to 4.0/6 in the tournament and has revived his chances to make it to the Candidates | Photo: John Saunders

Vishy had the White pieces and he started off the game as usual with 1.e4, to which Nodirbek replied symmetrically and invited his more experienced opponent to enter into the infamous Berlin territory. But the Indian had other plans in mind and promptly avoided going into drawish endings with 4.d3. Thus, the game continued in the vein of classical spanish! 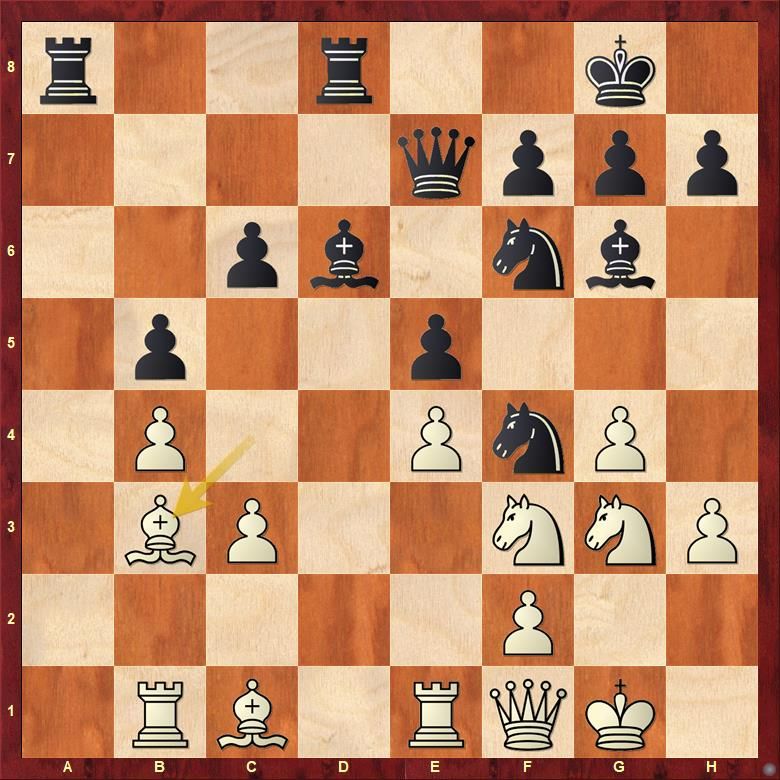 The critical moment arrived on move 21 when White played Bb3. This is very familiar Ruy Lopez structure where White's knights are developed on f3 and g3, and Nf5 is in the air. Well, it was in this position that Black erred with the move 21...Bc7 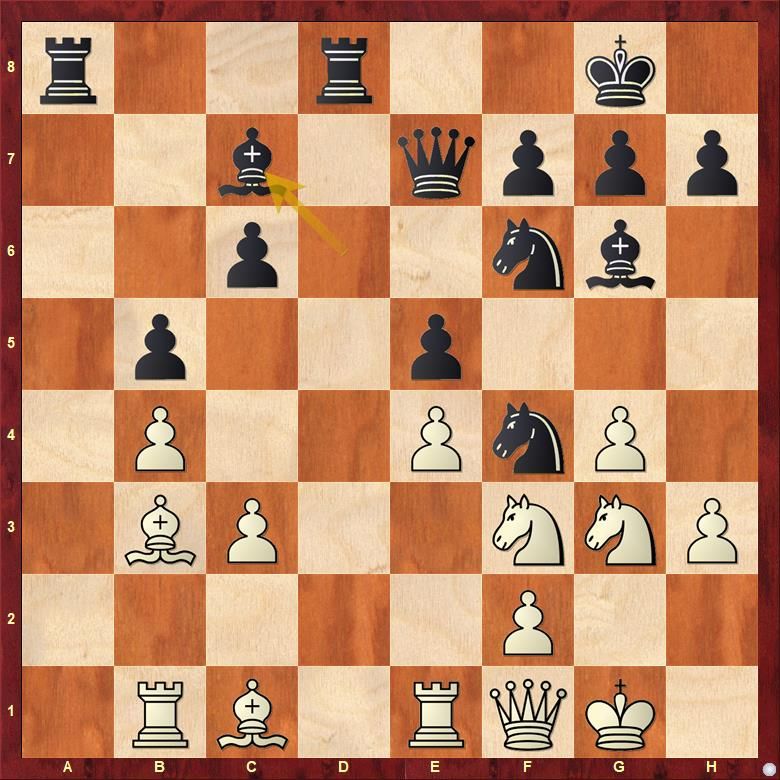 This harmless looking 21...Bc7 is really the beginning of disaster. Vishy continued here with 22.Bxf4 exf4 and followed it up with the thematic 23.Nf5! and soon Black was in trouble. 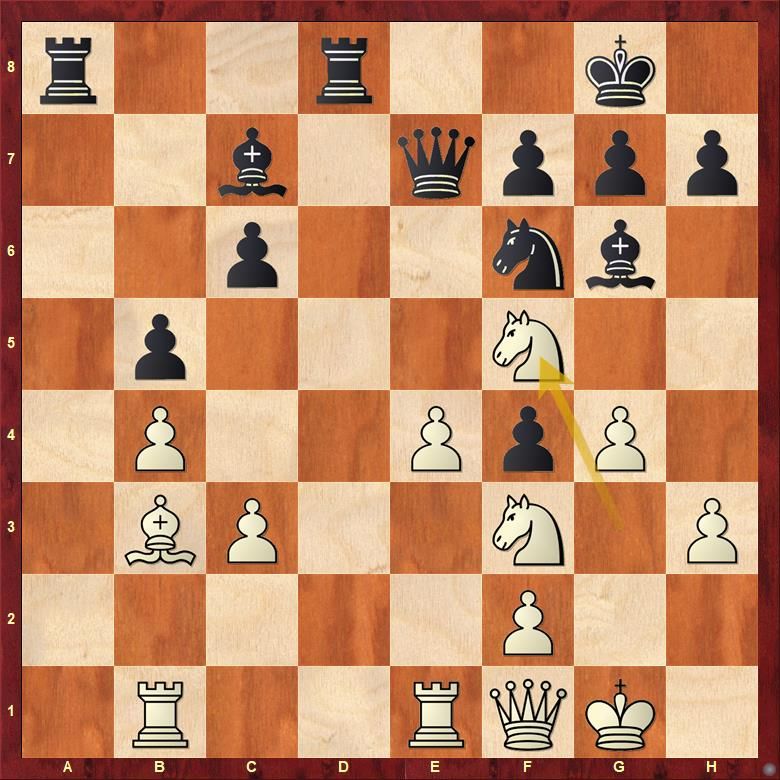 Position after 23.Nf5 : Black faces a dilemma here, what does he do with the well placed knight on f5? 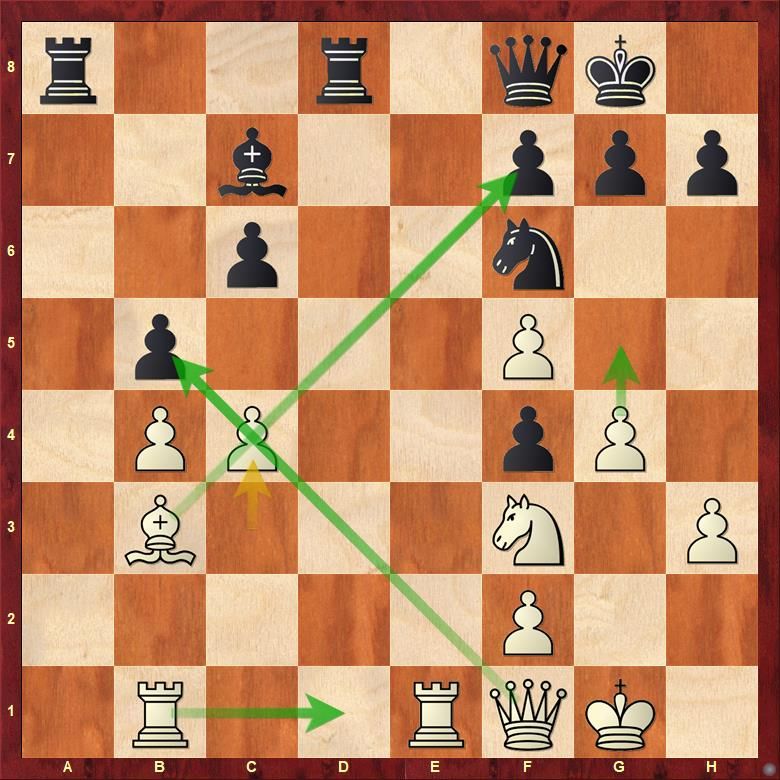 And this was all very pleasant for White; with the bishop hitting f7, the queen b5, the rooks ready to take control of the middle, and the kingside pawns prepared to roll out, he couldn't ask for anything better! 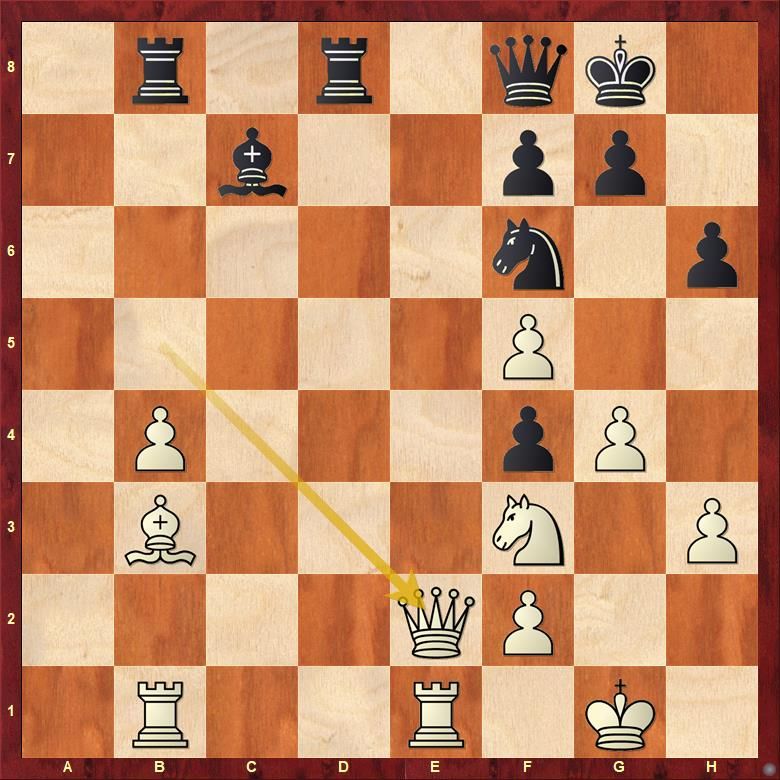 Soon White grabbed a pawn on the queenside, can you see why Black can't recapture on b4? 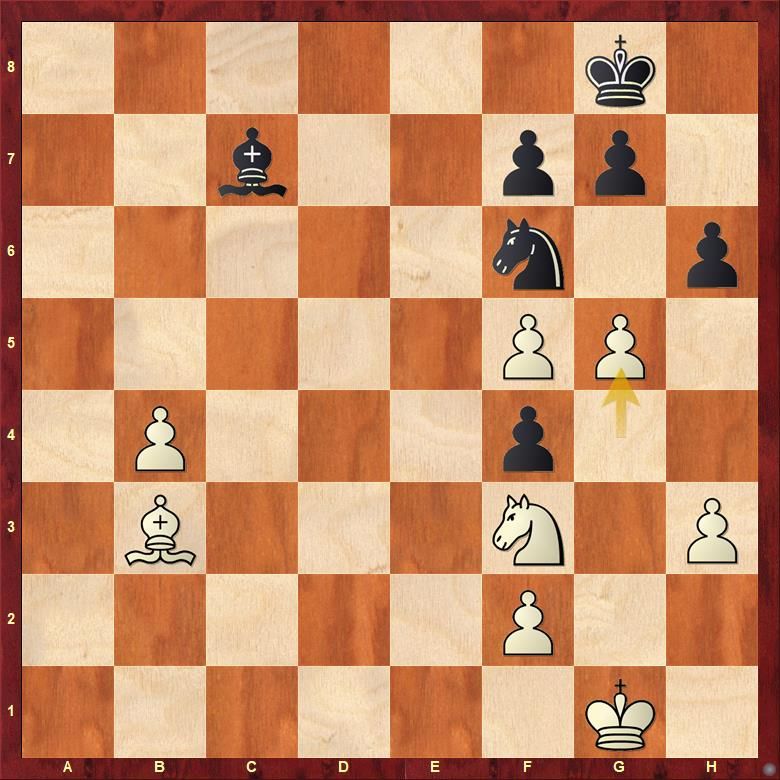 36.g5 was the final blow, after 36...hxg5 37.Nxg5 even the f7 pawn fell! Black kept on playing for a few more moves but the result of the game at this point had become absolutely clear. 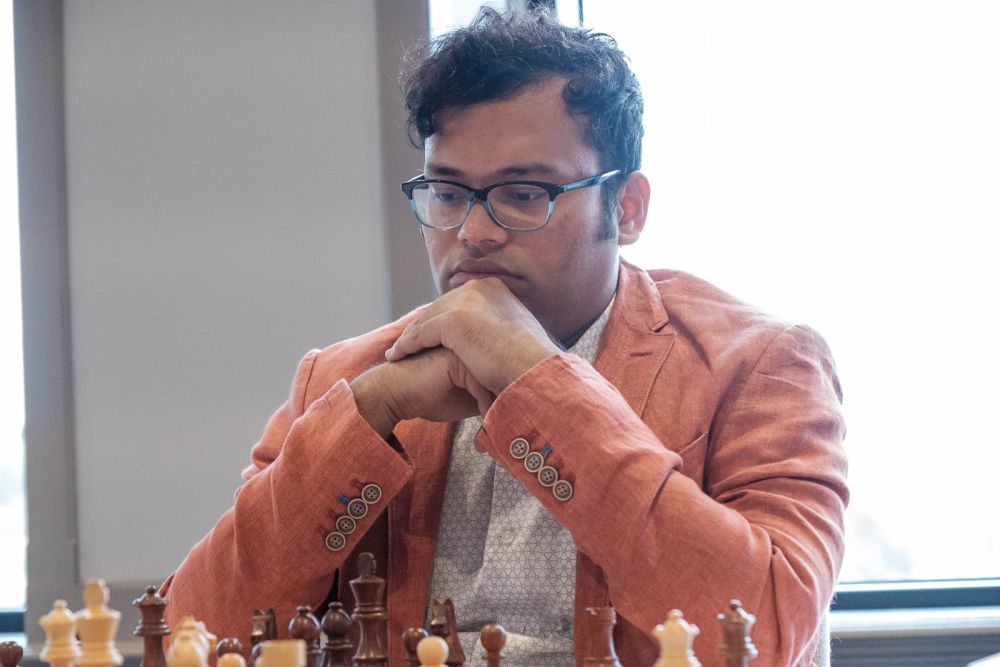 After yesterday's loss against Carlsen, Surya Sekhar Ganguly bounced back with an emphatic victory against Baadur Jobava. The Indian Grandmaster found an edge right out of the opening and by move 20 got a completely winning position | Photo: John Saunders 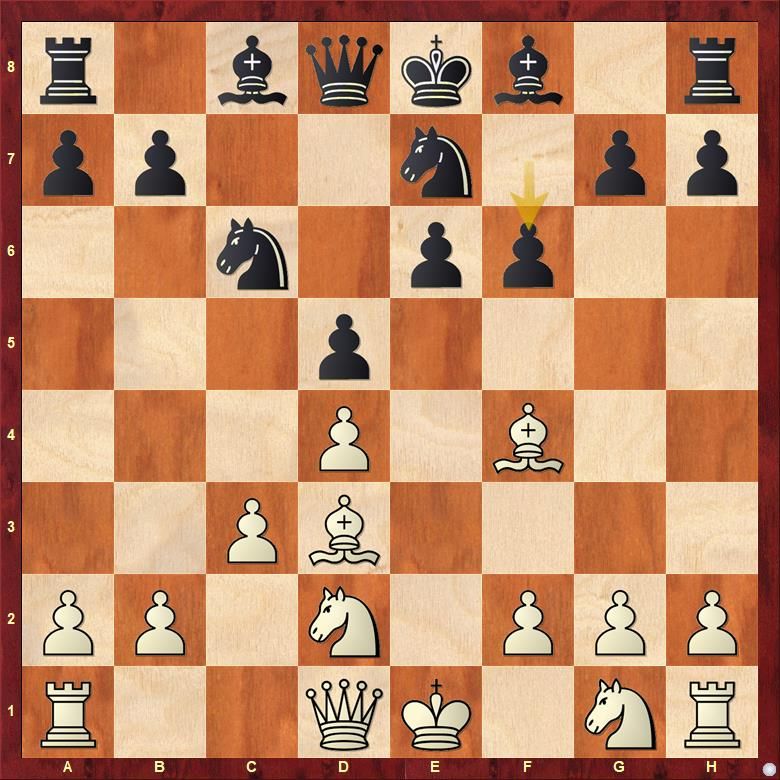 7...f6?! was a dubious attempt in the opening by the Georgian that got him into unfavourable positions. 7...Ng6 would have been much better instead, in fact it was played by Ganguly himself against Harikrishna last year in Kolkata. 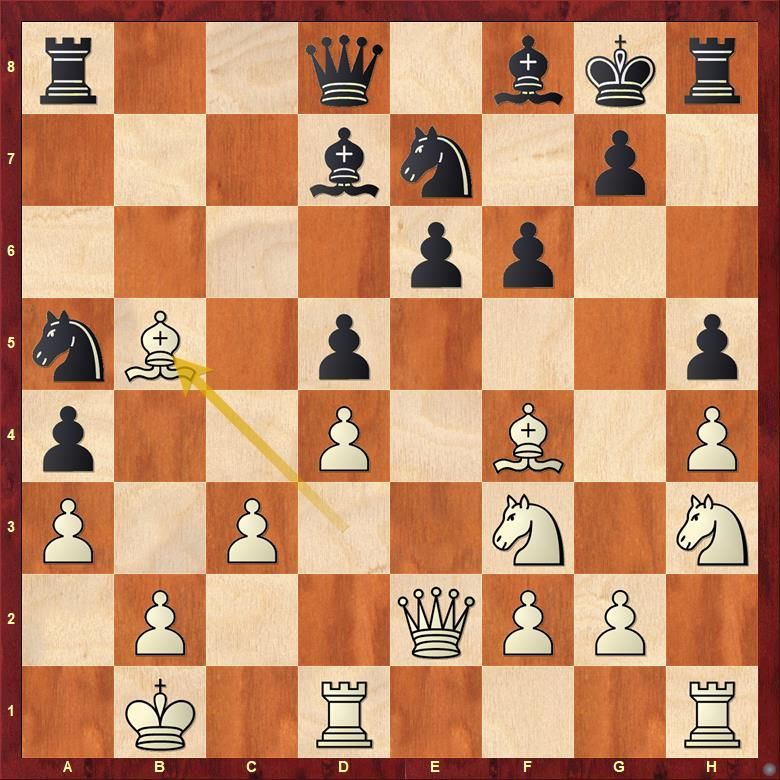 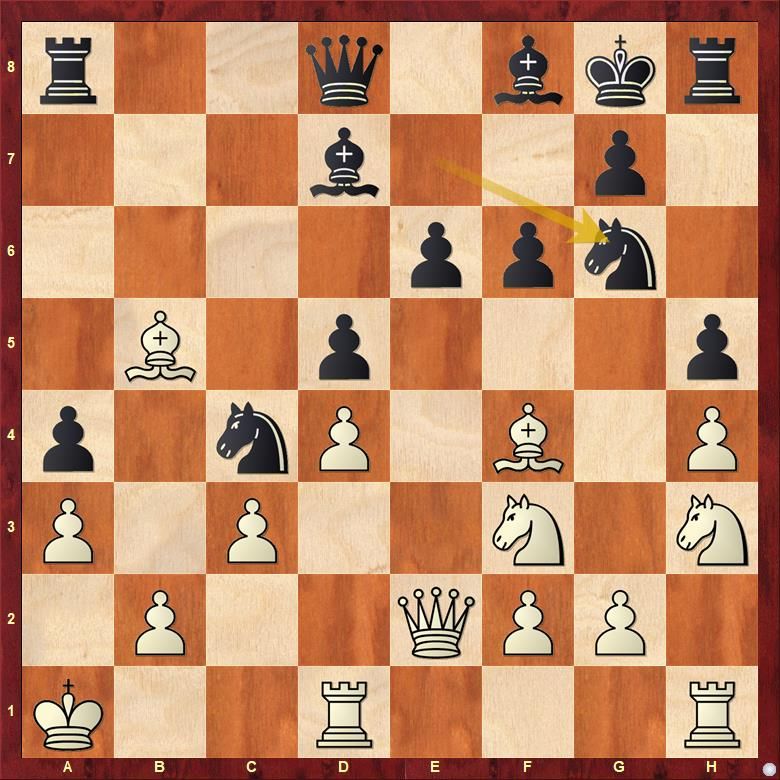 And the final mistake of the game came by the eighteenth move itself when Black went Ng6, this simply allowed White to grab a free pawn with a superior position. After 19.Bxc4 dxc4 20.Qxc4 Rc8 21.Qd3 Black was lost. Jobava played on for 15 more moves before resigning. 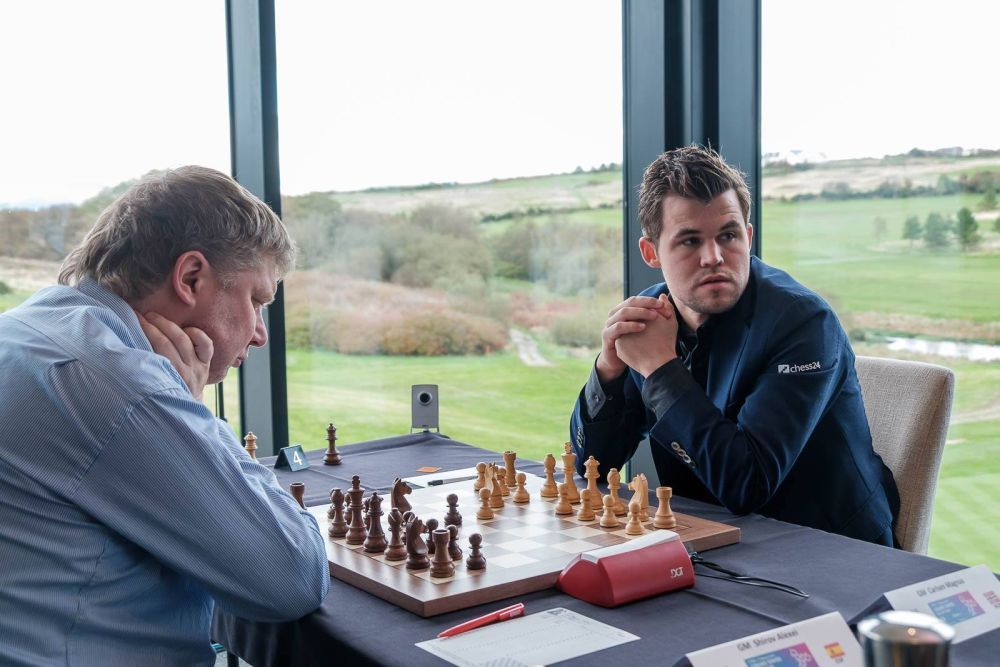 One of the most anticipated encounters of round six was between Magnus Carlsen and Alexei Shirov which the former won with white pieces in 43 moves | Photo: John Saunders 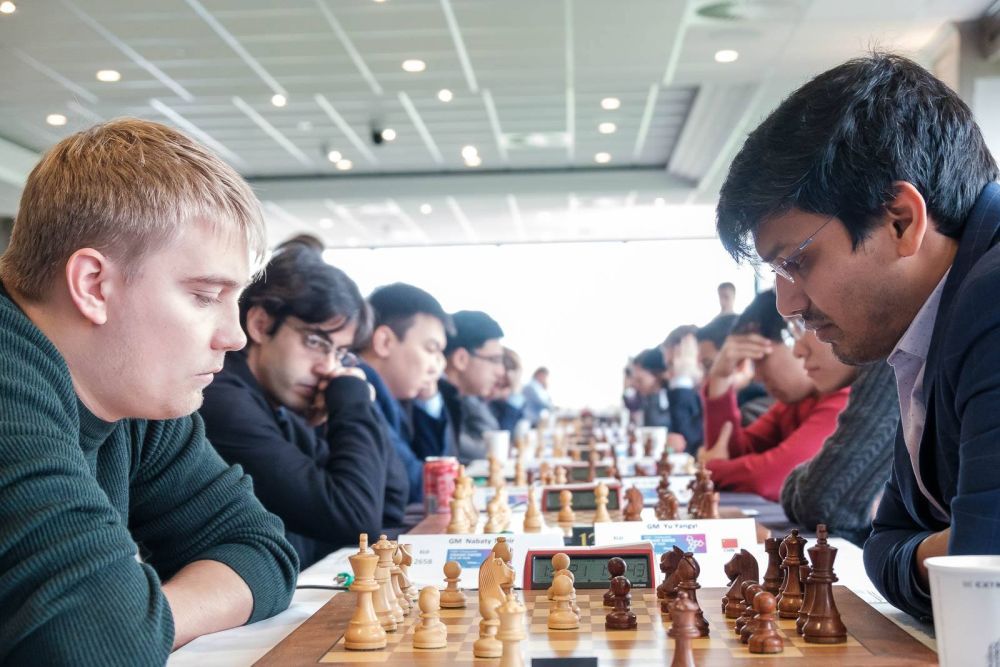 Vladislav Kovalev handed Harikrishna Pentala his first defeat in the event. The Belarusian was able to create a strong passer on the queenside and outplay the Indian | Photo: John Saunders 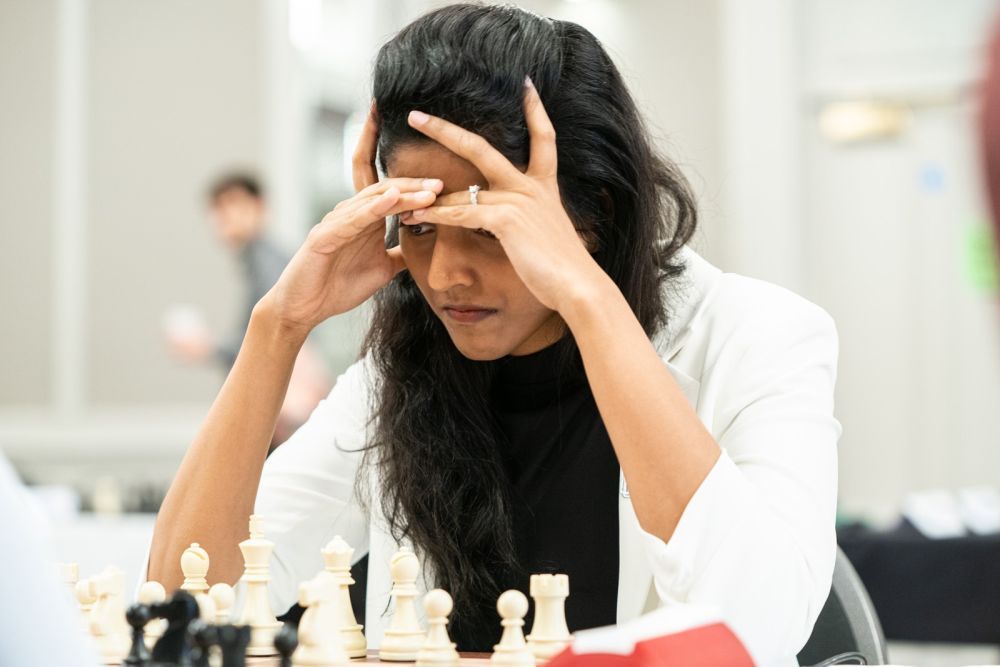 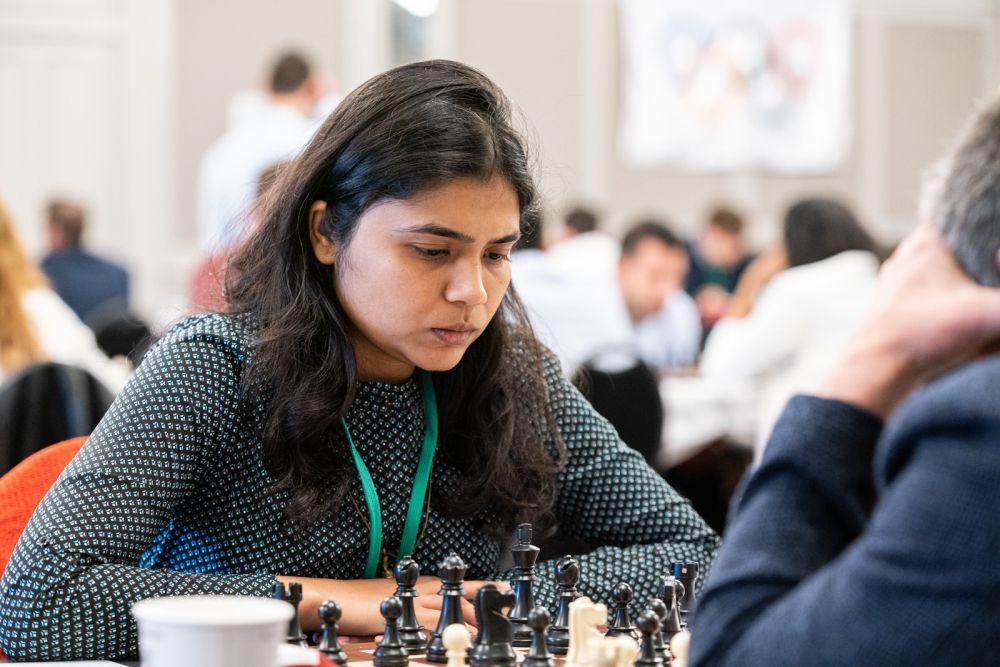 The other Indian female player in the event, Soumya Swaminathan, is also defending solidly. In round six she held GM Karen Movsziszian to a draw | Photo: Maria Emelianova 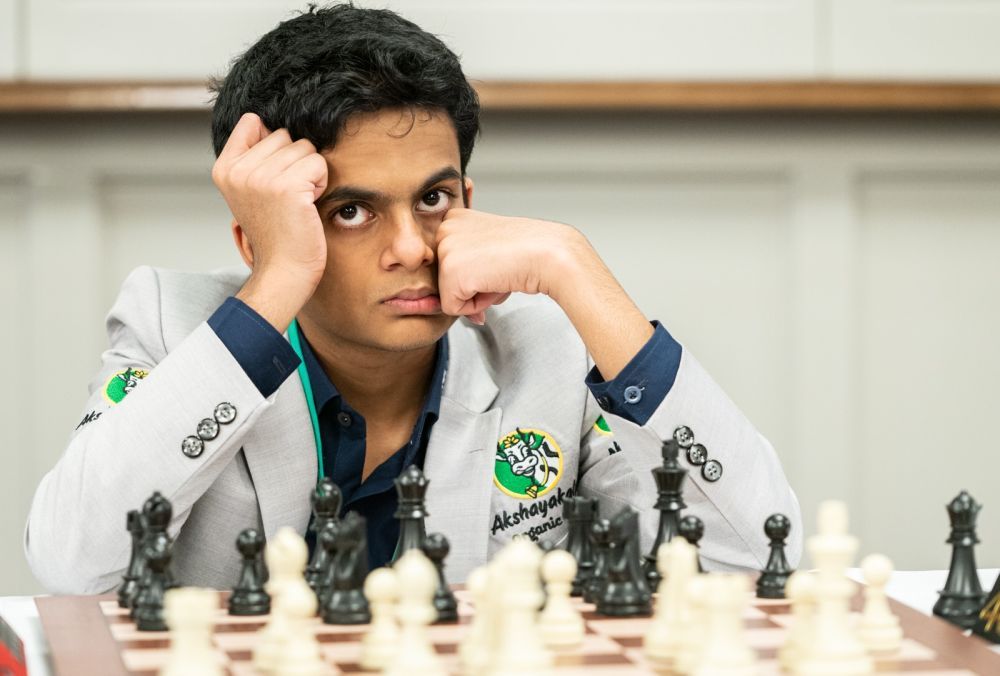 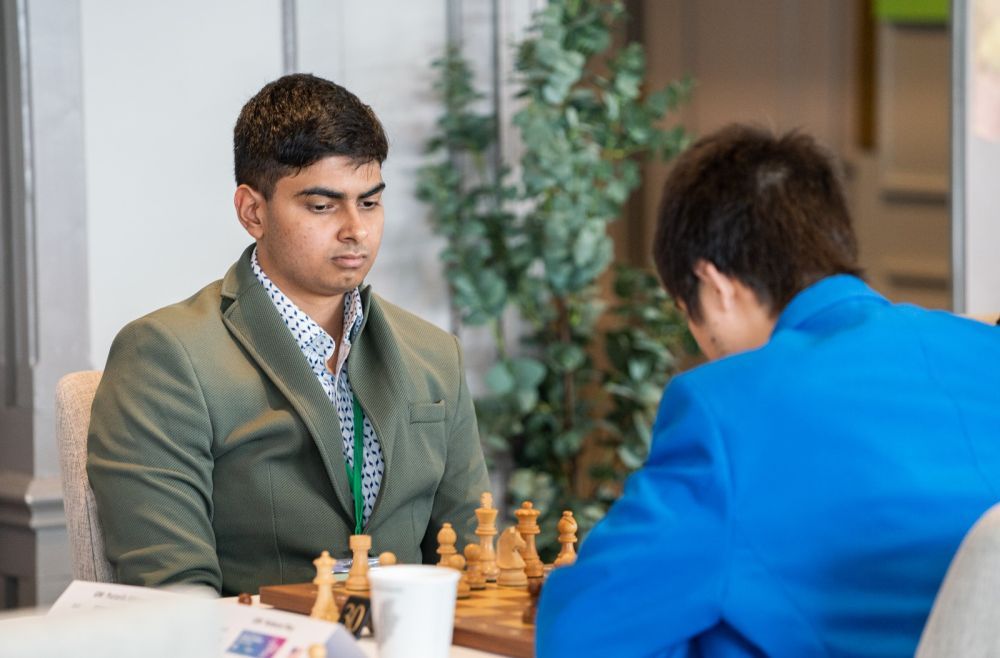 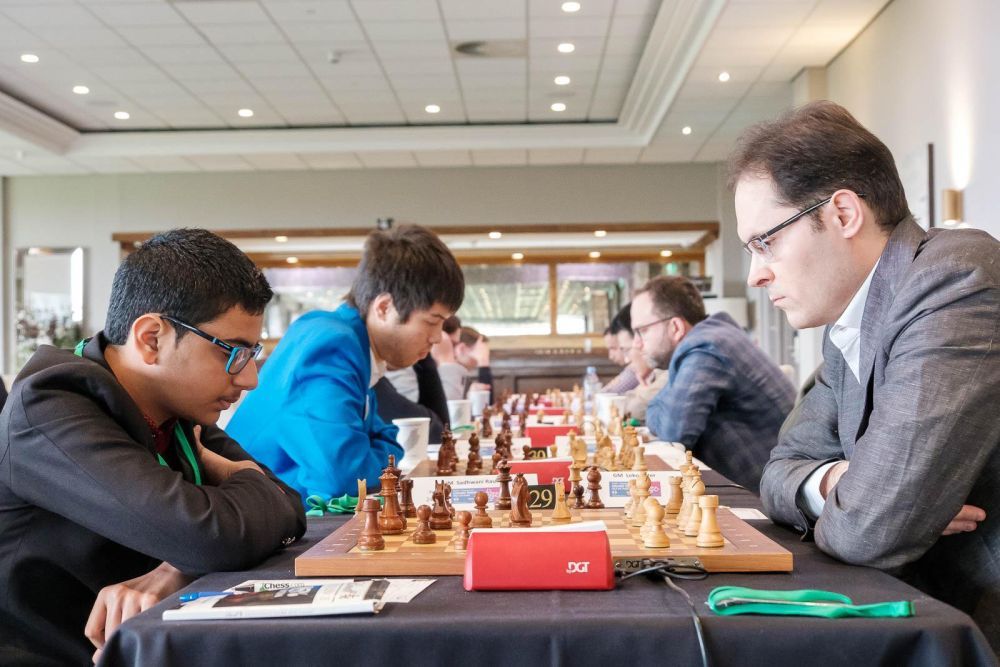 Raunak Sadhwani is all set to become the 65th GM of India. In the sixth round he was up against Peter Leko with black pieces. Although the Hungarian got the bishop pair early in the game but the 13-year-old didn't concede any chances and forced the split of point after 38 moves | Photo: John Saunders 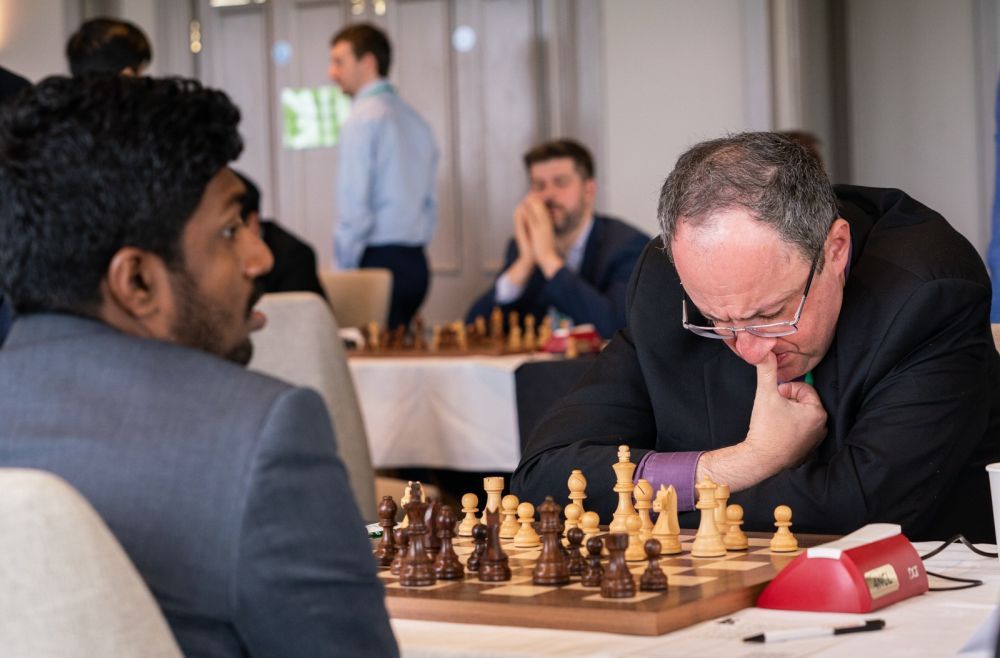 Another very interesting game was that between Boris Gelfand and Adhiban Baskaran. Adhiban had the black pieces and drew the Israeli legend in 46 moves | Photo: Maria Emelianova

There were seven leaders at the end of five rounds, after the completion of sixth round only two of them remained on the top after winning their games. Fabiano Caruana was able to draw his opponent Vladimir Fedoseev into his preparation of Sicilian Rossolimo and win a fine game, while Wang Hao played brilliantly to clinch the full point against the in-form Luke McShane. 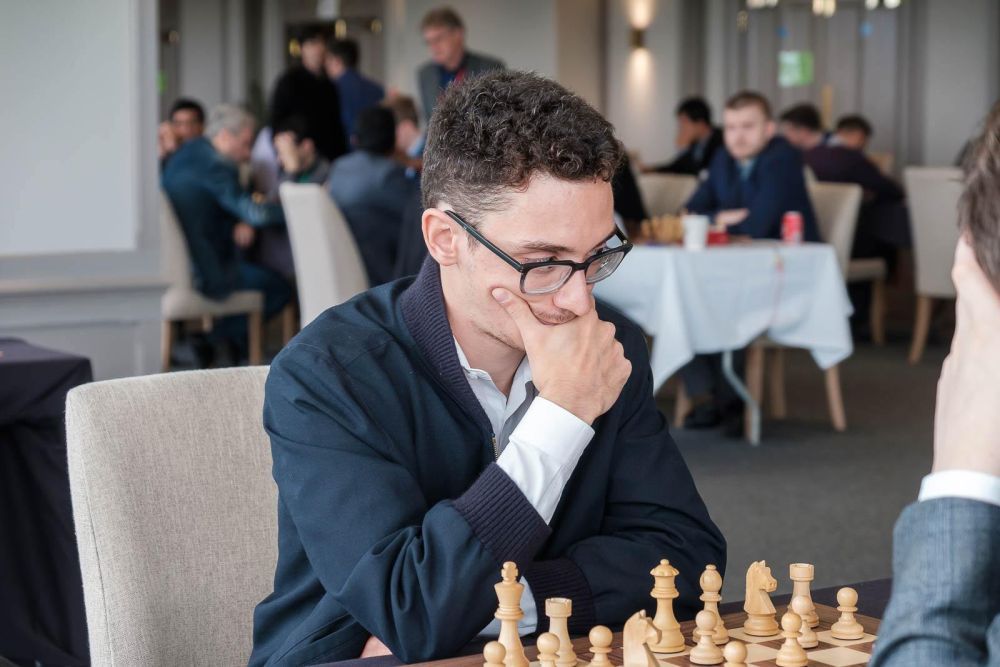 Fabiano Caruana defeated Vladimir Fedoseev to maintain his position on the top along with Wang Hao of China | Photo: John Saunders 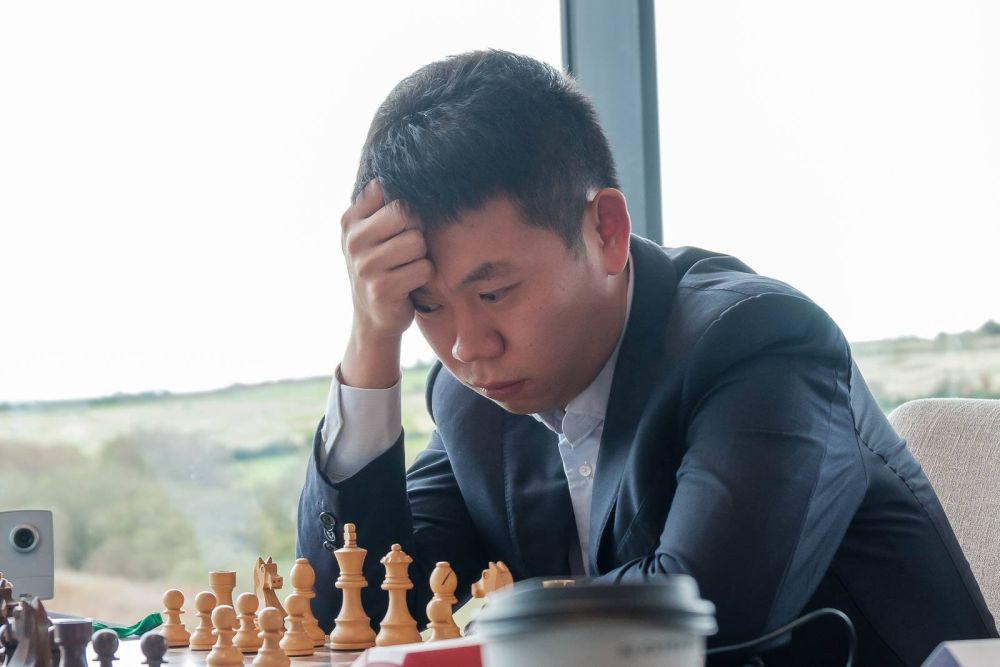 China's no.3, Wang Hao, is in tremendous form and has all the potential to make it to the Candidates this year. In round six he was just too strong for Luke McShane of England | Photo: John Saunders

Results of all Indian players (Round 6)

Results of top ten boards (Round 6)