Grand Swiss final: Wang Hao is the all taking winner

The FIDE Chess.com Grand Swiss Isle of Man came to conclusion on the 21st of October and ended in a tie between Wang Hao of China and Fabiano Caruana of the USA. Both of them finished with 8.0/11 points, however it was the chinese no.3 who came out on the top in tie-breaks. Therefore, with his final round victory against David Howell, Wang Hao not only clinched the coveted spot in Candidates 2020 for himself but also became the champion of the event. It was heartbreaking to see Vishy Anand's Candidates hopes come to an abrupt end but among the other Indians, several finished on a high note. In this round-up article we bring you the highlights of the last day's happenings and an overview of all notable Indian performances.

Wang Hao is the second chinese to qualify for Candidates 2020

Sometimes you deservingly get more than what you expect, Wang Hao was pleasantly surprised in both tenth and eleventh rounds of FIDE Chess.com Grand Swiss 2019 when his opponents blundered and went down against him from seemingly drawish positions. In the final round, David Howell found an almost symmetrical ending playing against the fianchetto Grunfeld with black pieces but just went things started looking harmlessly peaceful, the Englishman ended up getting his light-squared bishop pinned on the d-file. The chinese was at first startled to see what his opponent had suddenly gotten into and after about ten minutes of thought seized his opportunity with both hands! 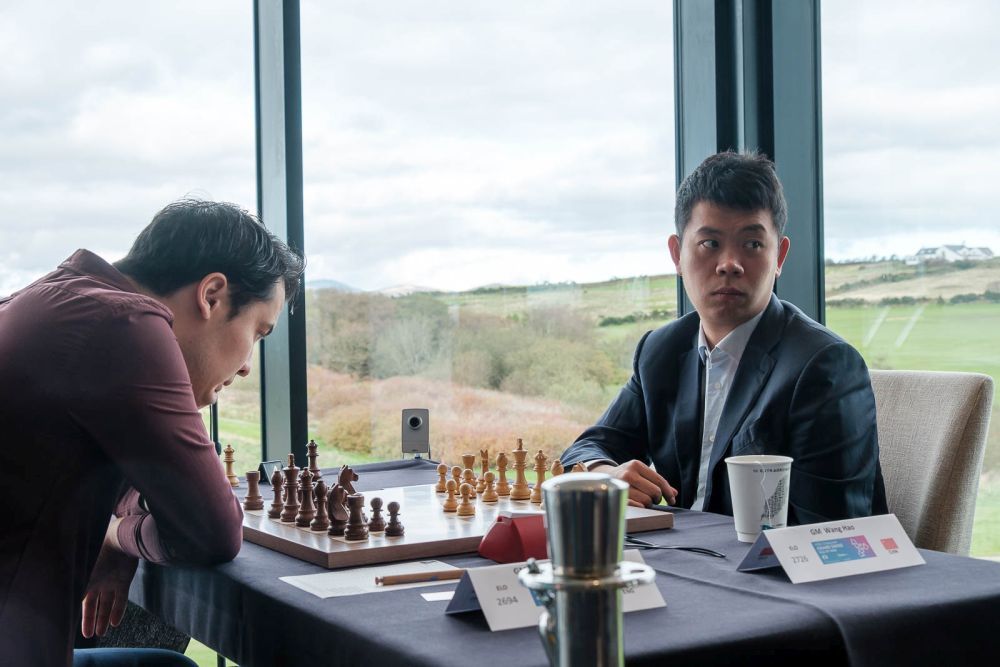 Lady luck smiled twice on Wang Hao towards the end of the tournament and the chinese superstar made the full use of it | Photo: John Saunders 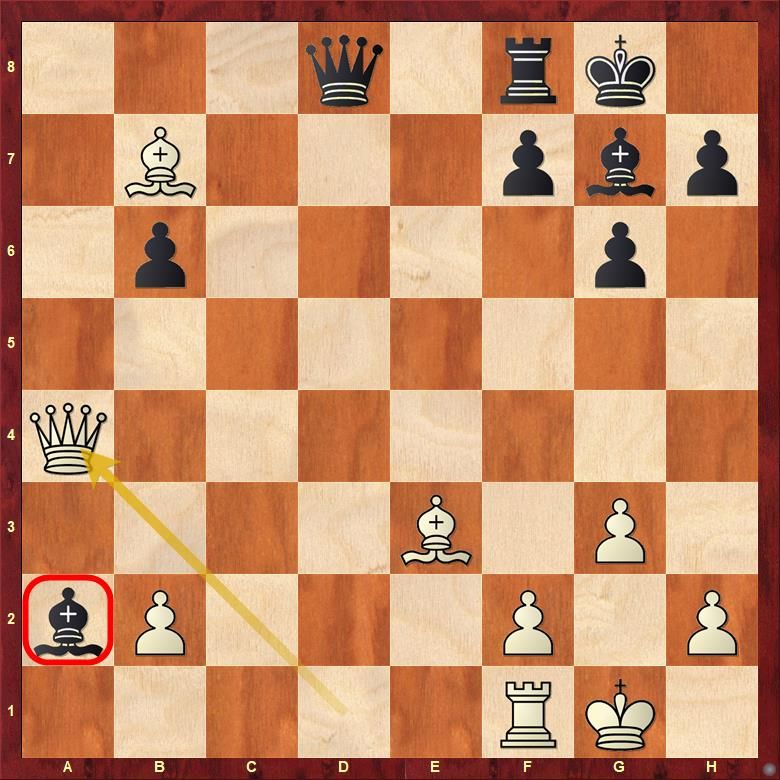 Position after 18.Qa4 - this was the critical moment in the game. White has just developed his queen, threatening the black bishop on a2, how should Black react?

The simple 18...Be6 would have left things perfectly balanced here - with so few pieces on board and symmetrical pawn structure, it is hard to imagine anything but a draw as the logical result of this game. But David Howell, quite shockingly, played the move 18...Bd5, he must have expected a further simplification with 19.Bxd5 Qxd5 etc, unfortunately however he had missed something really dangerous. 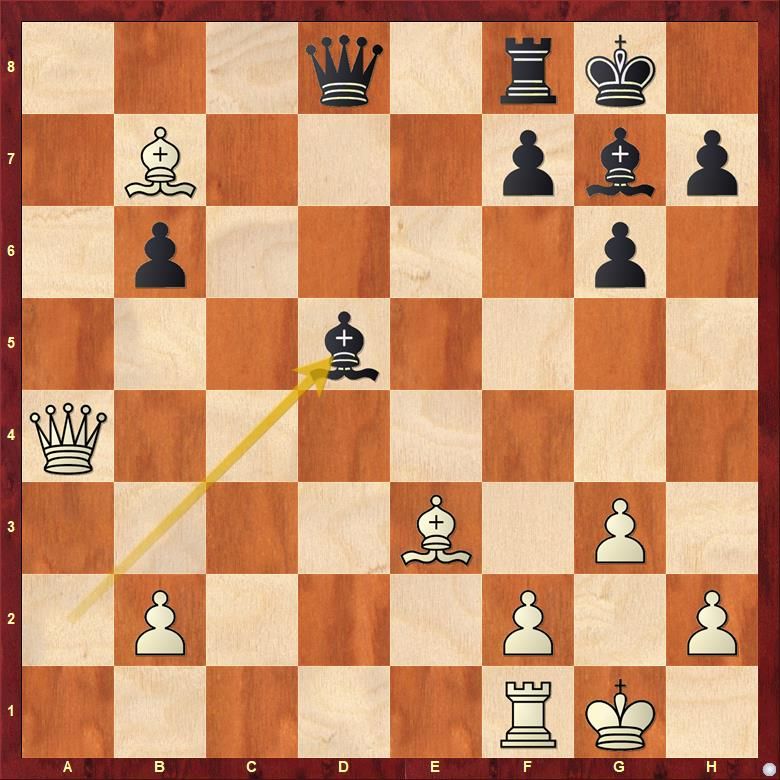 Can you see what Black overlooked when he played 18...Bd5?

Of course, it is 19.Rd1! - the dreadful pin, Wang Hao took about 10 minutes to play this move! He was certainly taken aback by this sudden turn of events. Howell, continued 19...Bxb7 here. He had to give up his queen for a rook and bishop to avoid losing a full piece. But this was just lost cause, after 20.Rxd8 Rxd8 21.f4 Bxb2 22.Qa7 Rd7 23.Qxb6 Black had no redemption, White's queen was just too strong for the rook-bishop duo. The game continued for 15 more moves and it was on move 36 Black resigned. 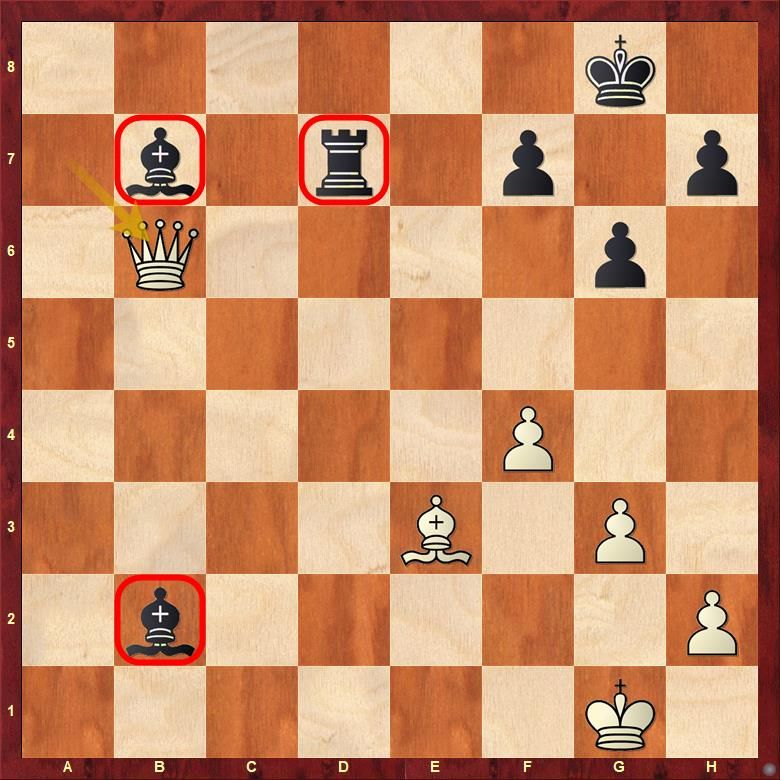 Position after 23.Qxb6 - We can see Black's pieces are loose and uncoordinated, they obviously don't stand any chance against White's queen. 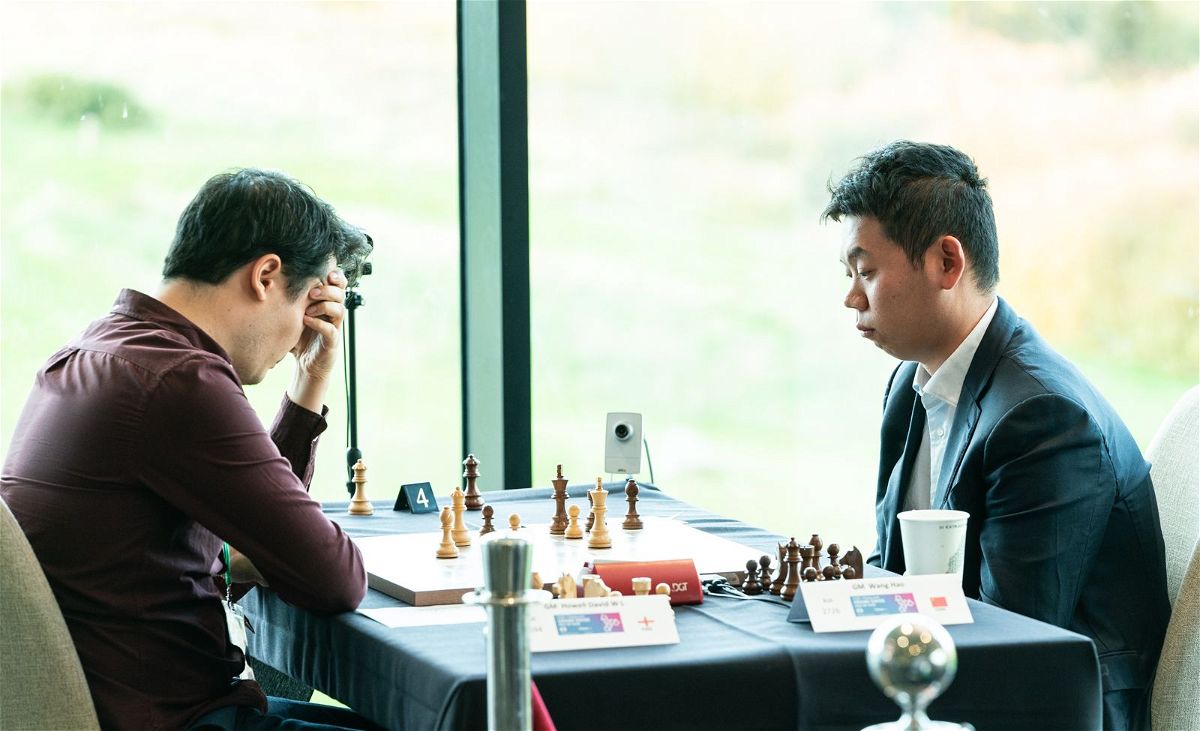 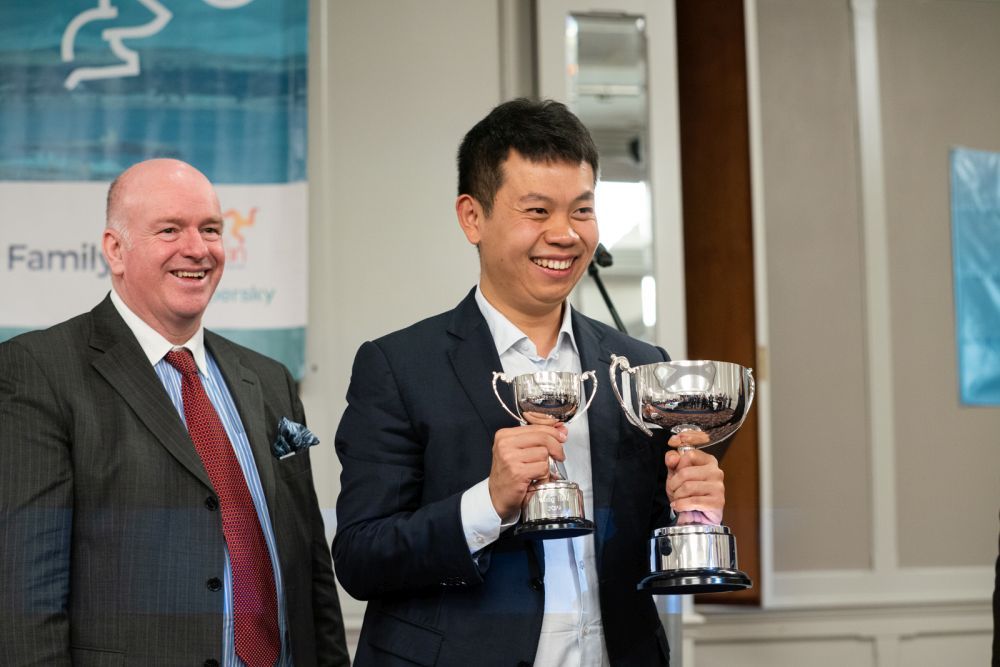 The smile when you have not only won what is but the strongest Swiss event in history but also secured a spot in the prestigious Candidates! | Photo: Maria Emelianova

Clearly, China is witnessing its heyday as far as chess is concerned. First it was Ding Liren and now it is Wang Hao who has qualified for the eight-player Candidates tournament. Can it eve even get better? About his plans for the Candidates, the 30-year-old Grandmaster from Harbin city of Heilongjiang said, "Now I need to go back home, sit down and think how to continue. I don’t have a team working with me. I am hoping to create a small team—three to four people—who will be able to help me. I am, however, not sure if I’ll be able to do so".

The top two prizes worth 70,000$ and 60,000$ were shared between Wang and Fabiano Caruana as both of them scored the same number of points (8.0/11) in the event. Five players - Kirill Alekseenko, Levon Aronian, David Anton Guijarro, Magnus Carlsen, Hikaru Nakamura, and Nikita Vitiugov - finished just half a point behind with 7.5/11 points. 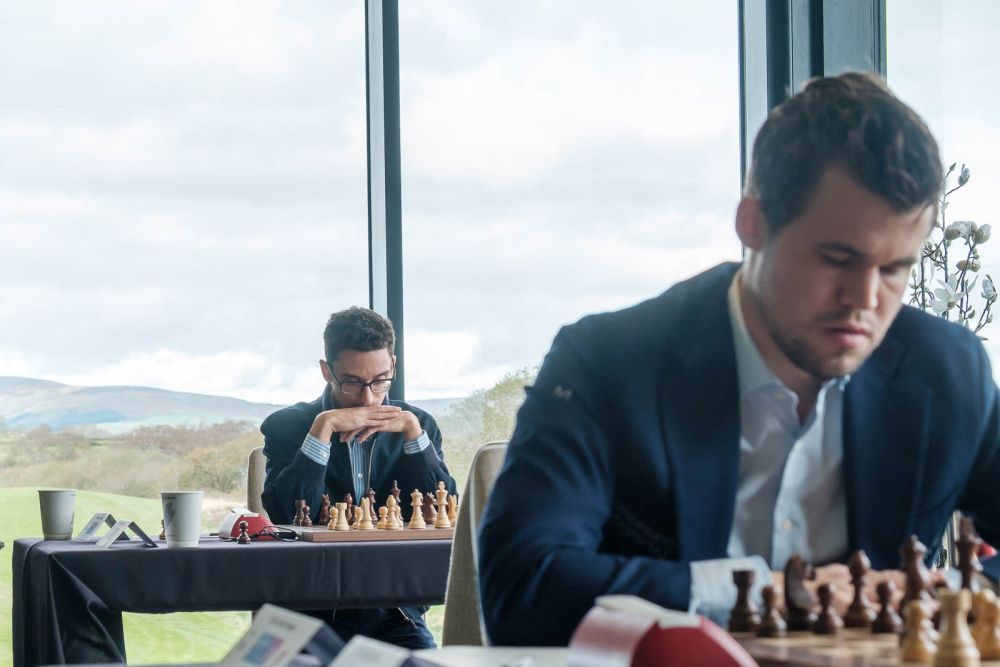 Fabiano drew his last round game against Hikaru Nakamura on board one, Oon second board Magnus Carlsen and Levon Aronian too split the point between themselves. Both these encounters were relatively short and lasted less than forty moves | Photo: John Saunders 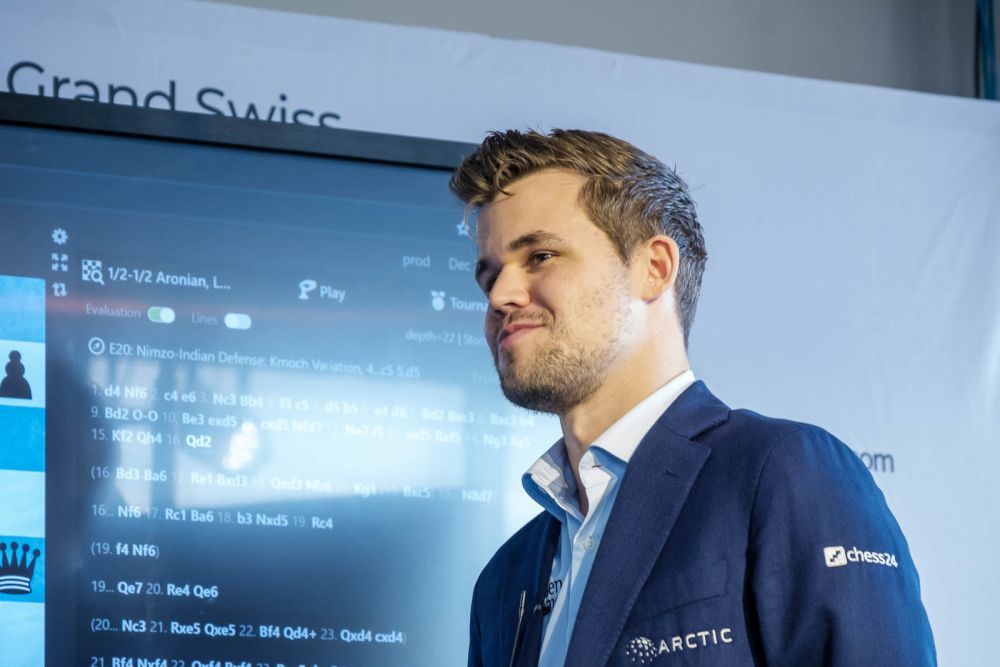 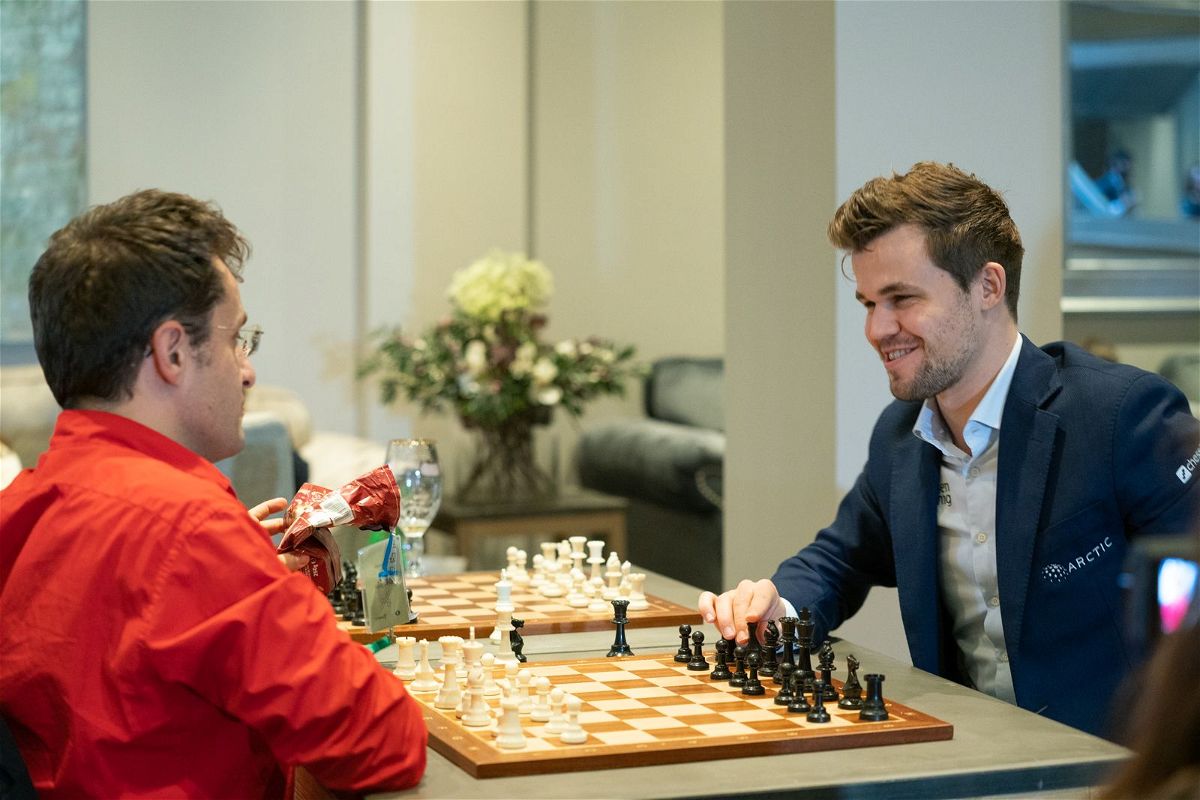 Both Magnus and Levon were found in jovial mood after their last round game! | Photo: Maria Emelianova

An overview of Indian performances

The tournament ended somewhat disappointingly for the Indian contingent as Vishy Anand missed his last chance to qualify for the Candidates this year. But overall, several Indian players finished the eleventh round on a very positive note. First and foremost, Raunak Sadhwani became the 65th Grandmaster of the country by pulling off a performance rating of 2677 and gaining 28 Elo points. The way the 13-year-old boy from Nagpur played stunned the whole world. 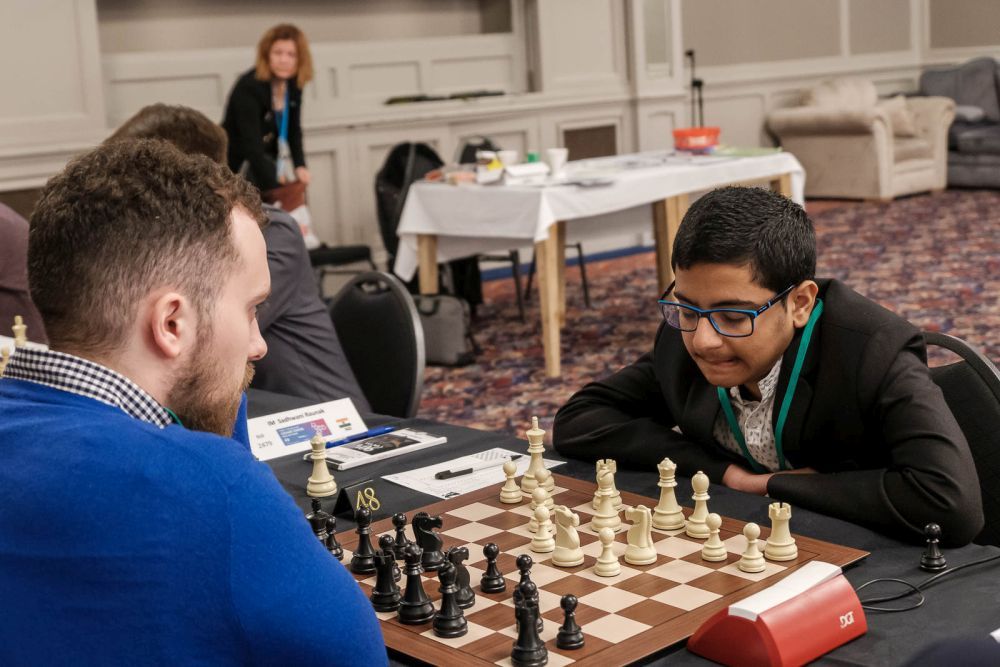 Raunak drew his last round game against Maksim Chigaev to finish with a score of 5.5/11 | Photo: John Saunders 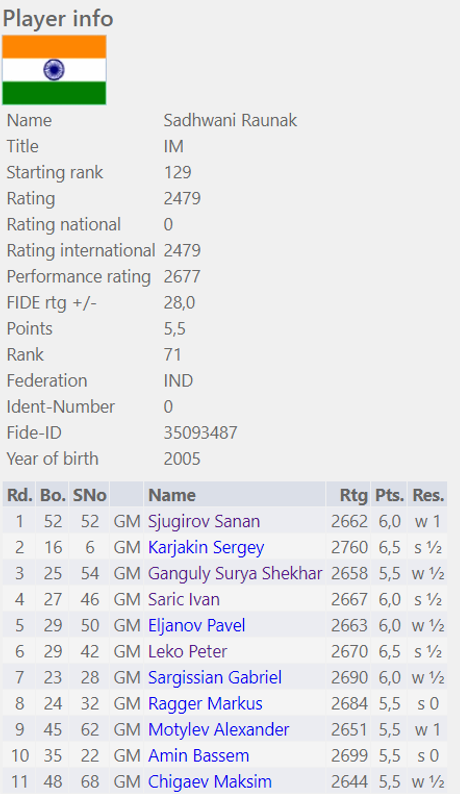 The average rating of players Raunak faced was more than 2650, yet the youngster held his own; drew seven games, won two, and lost two.

The best performing Indian in the event was Vidit Santosh Gujrathi who finished overall 12th, just a point behind the leaders with a score of 7.0/11. Vidit had the white pieces in the last round of the tournament and here he outplayed the 2613-rated Grandmaster Bogdan-Daniel Deac in his characteristic positional style. The game opened with the Ragozin variation of queen's gambit declined and the Indian beautifully switched his play from one side of the board to the other. First pressurizing the queenside by taking control of the b and c files with his rooks and later directing his queen towards the kingside. The Romanian defended well initially but missed his footing around move 40 which allowed the India no.3 to tactically liquidate into a pawn-up ending and eventually win the game. 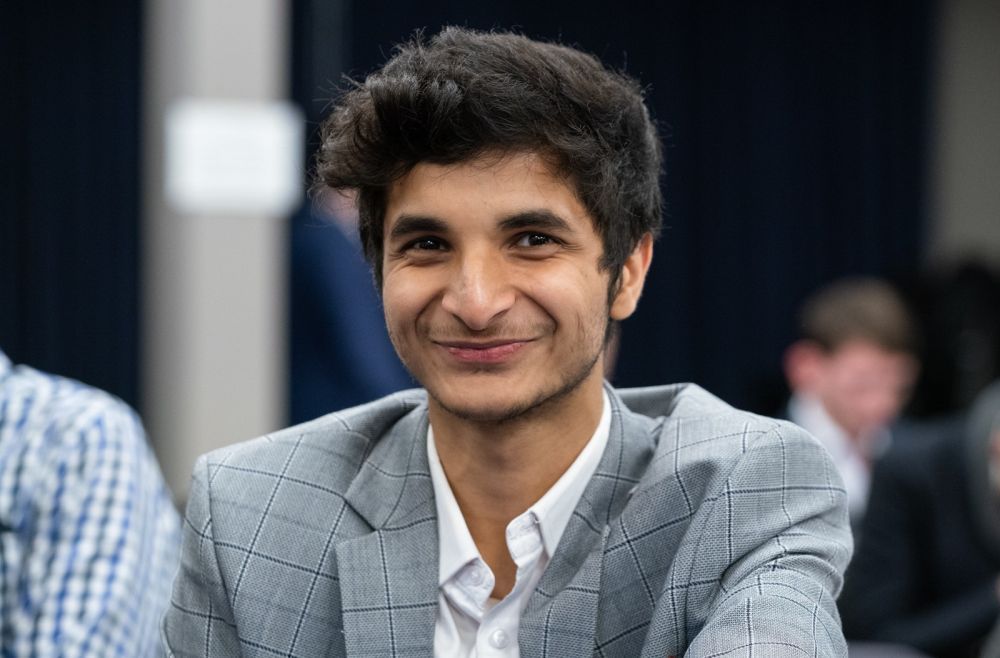 Vidit took back home a cash prize of 8000 US Dollars and must have been happy to perform at 2743 Elo | Photo: Maria Emelianova 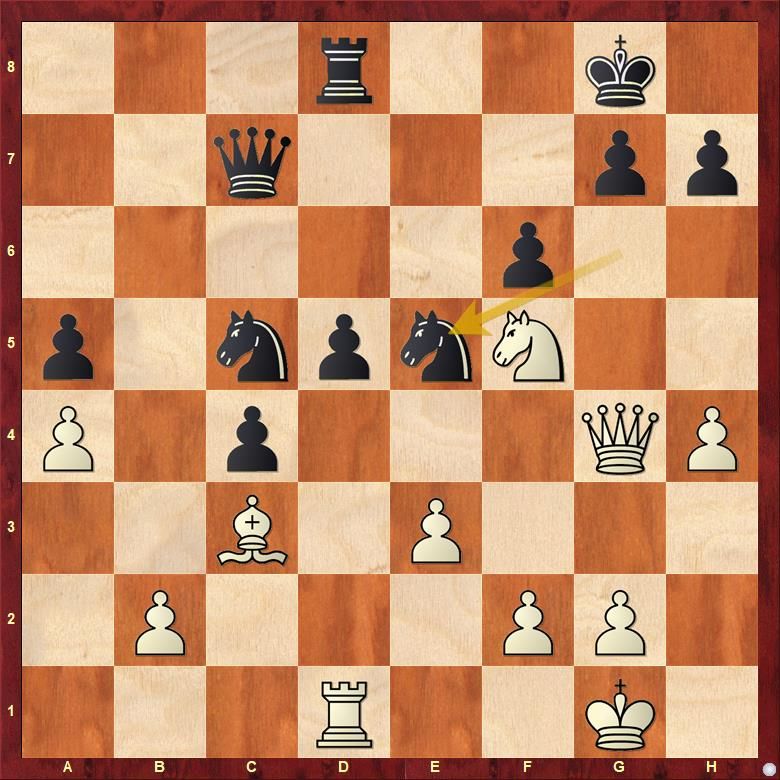 Position after 40...Ne5: Can you find the little tactic that enabled Vidit to edge out his opponent? Check the game below for answer! 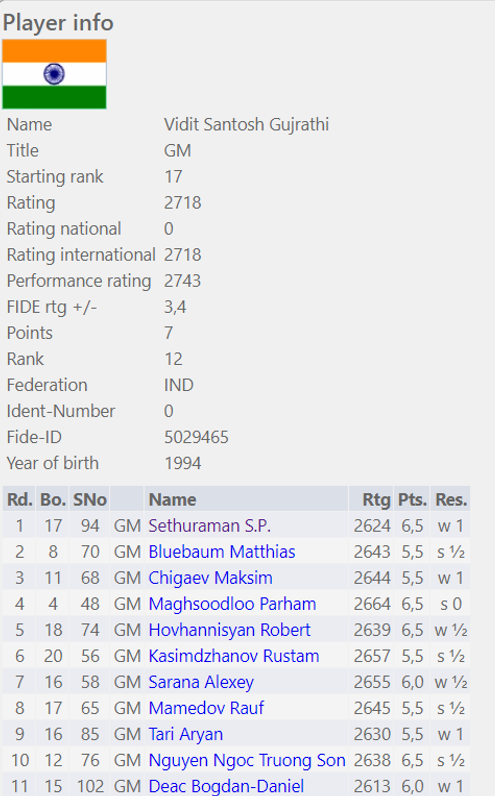 An overview of Vidit's performance.

S.L.Narayanan - the man who was steady as rock!

S.L.Narayanan started off the event as the 104th seed but impressively finished 47th on the rank-list. It almost seemed he would remain unbeaten in the event but unfortunately he had to suffer one single defeat in the hands of Hrant Melkumyan in the penultimate round. 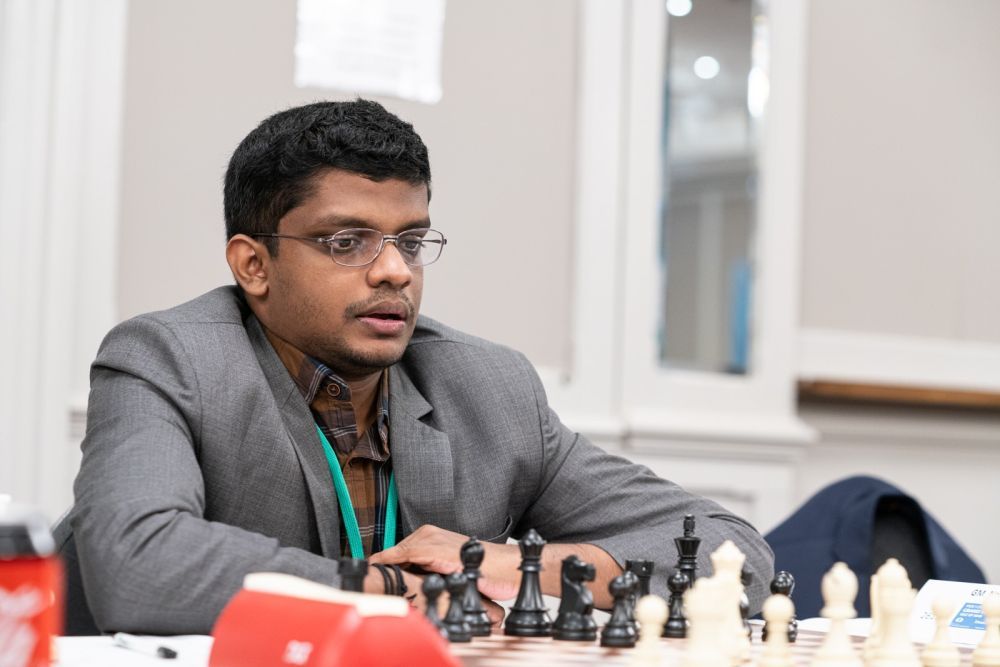 Hats off to this brave lad from Kerala who won hearts with his courageous play! | Photo: John Saunders 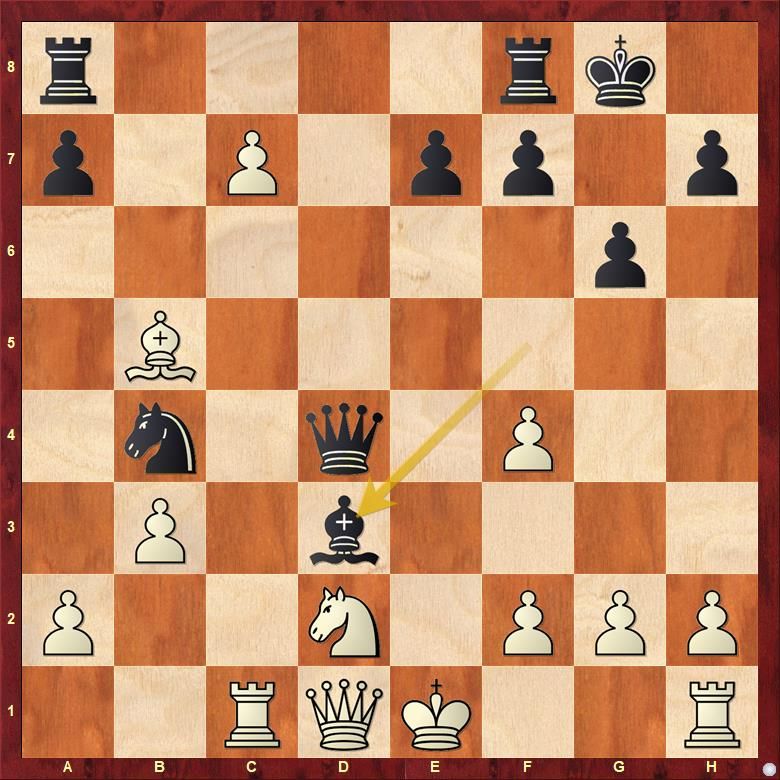 In the final round Narayanan punished his opponent Tamir Nabaty with black pieces for his dubious opening play. The above is after 17...Bd3, Black already has the white king on ropes, how do you think should White continue?

In the game 18.Bc4 Nxa2 19.Bxd3 Nxc1 20.Qxc1 Qxd3 was played and Black was simply an exchange up with a superior position. The best resistance would have been something like 18.a3 Na2 19.Rc4 Bxc4 20.Bxc4 where White gets at least some compensation for the exchange. Nabaty was completely losing after 20...Qxd3 but he played on and also got some chances to revive his position. But he couldn't make the best possible use of these and resigned on move 40. 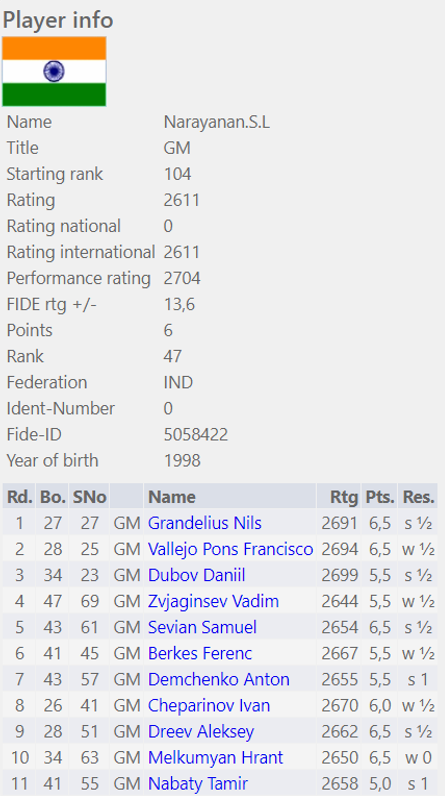 Note, Narayanan pulled off a performance rating of 2704!

Gukesh D was another youngster who did very well in the event. He scored 6.0/11 points and finished 48th (even though starting as the 119th seed!) on the overall rank-list. His best performance came in rounds six, seven, and eight where he scored three consecutive wins against IM Houska Jovanka, GM Axel Bachmann, and GM Vadim Zvjaginsev. 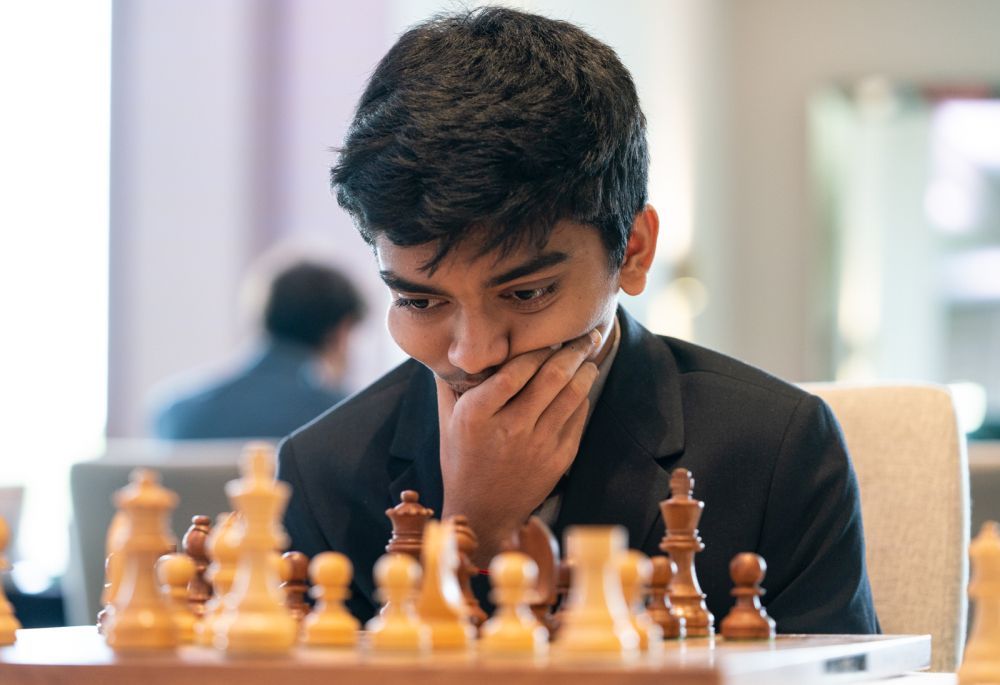 Gukesh drew his last round game against the Russian phenom Vladislav Artemiev. This encounter is presented below | Photo: Maria Emelianova

The youngster is not going to take rest any time soon as he is already off to Germany playing the Gmund am Tegernsee open! 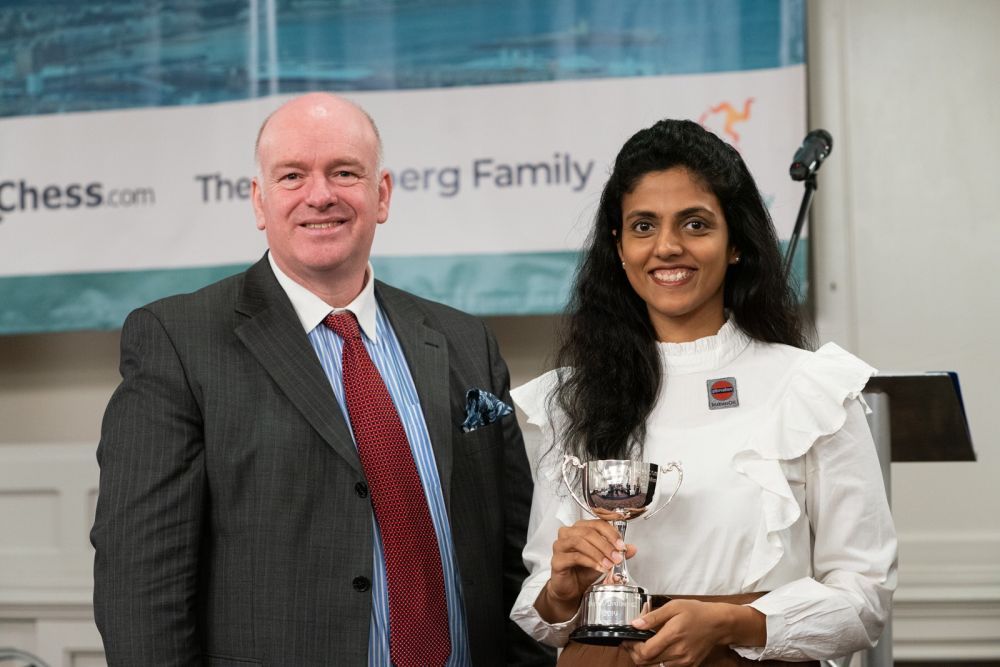 Harika started off as the highest rated female player in the event and lived up to her strength by also finishing as the highest performing female. She went home richer by 10,000 US Dollars and is back in the World top ten! | Photo: Maria Emelianova

The other Indian female player Soumya Swaminathan also made an IM norm from the event and had a tremendous experience. She tweeted the following yesterday:

Results of all Indians in the final round

An overview of all Indian performances