Today, Friday, November 6, at 7:00 p.m. IST there will be another Blitz Challenge on Playchess. The player to beat is 18-year-old Iniyan Panneerselvam, who recently won the World Open, and played a 72-hour online Blitz Marathon to raise funds for the COVID crisis. The Playchess challenge games will be commented by host IM Sagar Shah, who will also be analyzing them with Iniyan afterwards. You too can play against him too, or simply watch and learn.

Iniyan will be playing against Premium members of the ChessBase Account. Time control: 3 min + 2 sec increment. The games will be commentated by IM Sagar Shah, and he will be analyzing them with the masters after each game is over! This is a perfect way to match your wits against a great talent and at the same time learn from the commentary and post-game analysis. 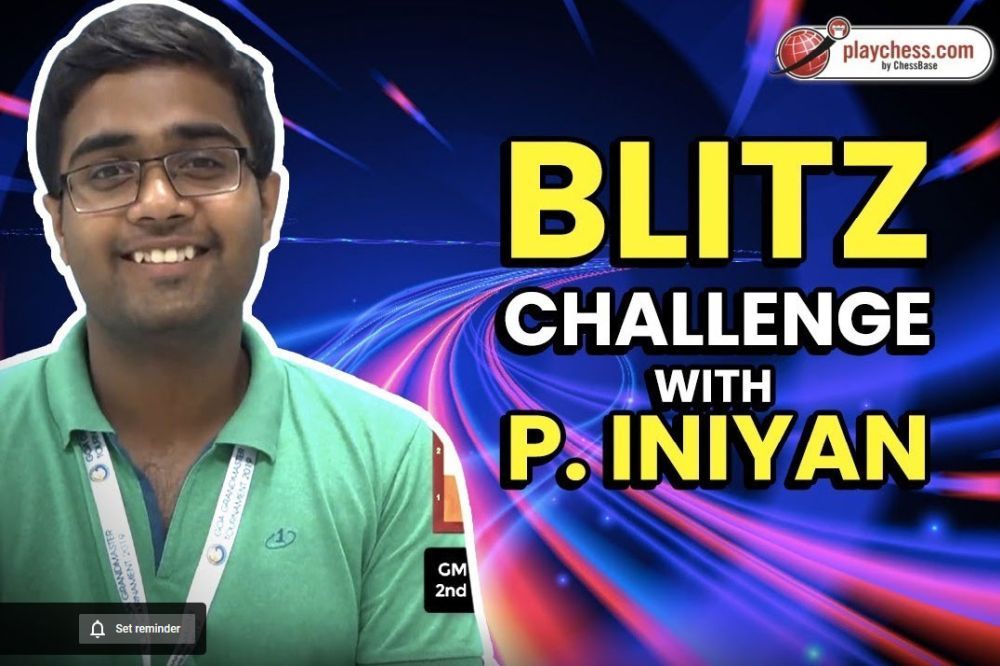 If you do not have a ChessBase Account already you can get one here - it costs just ₹1768.82 per year (or ₹147.40 per month) for Premium membership. A three-month account costs ₹588.82. You can compare what each account has to offer here.

You can challenge him or to simply watch the games in:

• The Blitz Challenge Room on Playchess,

• or you can watch the action on YouTube here.

• Starting time at your location.

The event is being staged by ChessBase India, which has 500,000+ subscribers on YouTube, with up to 35 million views of individual videos.

Born in Erode, a small town in Tamil Nadu in 13.09.2002, Iniyan started his chess career at the age of five and a half in his family. His first tournaments started in the end of 2008, and his talent in the game became obvious. In 2009 he won Silver in the Indian National U7 championship and qualified for internationals. The first international tournament was the Asian Youth U8 and the World Youth U-8.

During the Anand-Carlsen World Championship match in 2013 in Chennai a number of tournaments were held for chess enthusiasts. In the below 2100 category, Iniyan, who was the 41th seed player, won the tournament with 9/9 points. Improving rapidly he went on to win the Commonwealth U14 championship in 2016 with a perfect 9/9 score.

The June to September 2017 season was the best in his career. In eight tournaments, one after the other in Spain, Andorra, UAE and Malaysia. In the first he beat three GMs and gained his first GM norm. In the following years he completed five GM norms, but only gained the title when he reached the required rating (by beating the 2600+ GM Sergey Fedorchuk) in 2019. Here's that vital game in Iniyan's career:

In May this year Iniyan decided to organise a fundraiser for Covid-19. In this he staged a Blitz Marathon in which he played analysed the games with participants for a minimum donation of Rs.150 (two US dollars). Over the course of three days he played against 271 players from ten countries. Except for the sleeping time he was playing without stop, starting at about 8:30 a.m. and going till midnight. The total playing time was 45 hours. With this effort Iniyan raised Rs. 121,199, which was donated in full to the Chief Ministers relief fund and Prime Ministers Care fund. This is what Vladimir Kramnik thought of the effort:

On the Facebook Blitz Marathon page you can see what dozens of other grandmasters and famous personalities through of Iniyan's action for Covid relief.

Recently the World Open was held, online due to corona crisis. The GMs came in force, making up 1/3rd of the participants being GM. Iniyan started with a draw, but continued with six wins, against player like Sevian, Jobava, Nyzhyk and Erenburg, and in the end tied for first place. A great victory considering, the level of opposition. Incidentally a few days before the World Open he won a game of which he is especially proud:

In August/September 2019, Iniyan participated in a special training camp conducted by Vladimir Kramnik for six very talented Indian youngsters in Chens-Sur-Léman, France. He also took part in the Training Camp II in Chennai, India, with Kramnik and Boris Gelfand. In the latter he proved that he is a superb solver of logical problems, as we reported here. You can watch him perform in the video at the end of this report.

IM Sagar Shah and Iniyan P will be live on the ChessBase India channel. You can either watch the show from the embed given below, or if you would like to interact with them, then you can open the video from here, which takes you to YouTube and you can interact with them.

Tune in at 7 p.m. IST to watch the action LIVE today 6th of November

Editor-in-Chief emeritus of the ChessBase News page. Studied Philosophy and Linguistics at the University of Hamburg and Oxford, graduating with a thesis on speech act theory and moral language. He started a university career but switched to science journalism, producing documentaries for German TV. In 1986 he co-founded ChessBase.