When you look at the game played by 8-year-old Iniyan at the World Youth Championships in 2010, you will realize that the talent was unquestionable. However, when you go through this article, you will also understand that talent on its own cannot get you the success. There are a lot of factors that went in to create Erode's first International Master at the age of 14 years. We bring you the entire story and tell you why P. Iniyan is a boy to watch out for in the days to come. 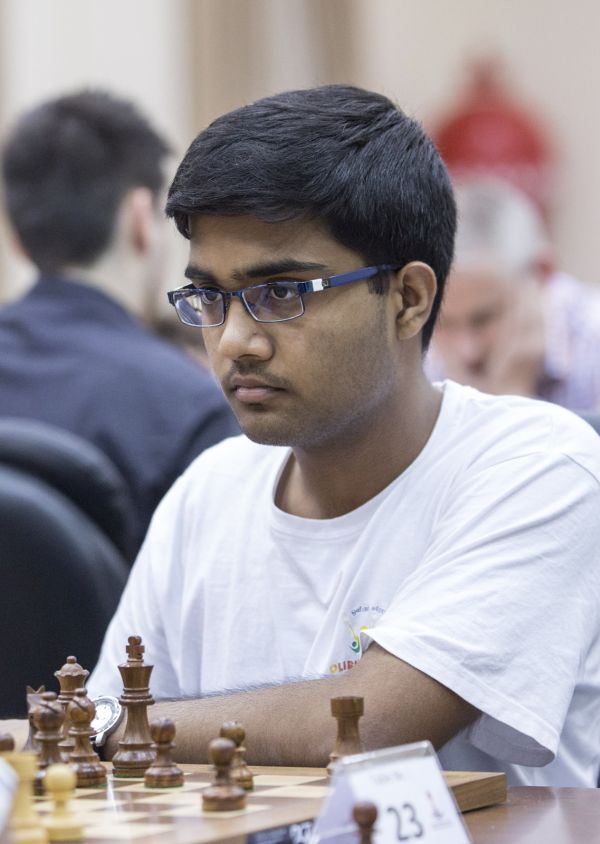 Iniyan started playing chess at the age of five. His father tutored him about the basics of the game. About a year later, when he was six, he went to Mr. Thirumurugan who was coaching in his home-town of Erode. In his first FIDE rated tournament itself, Iniyan got the best youngest player award. In April 2009, at the age of six, he got the rating of 1535. With good performances at under-7 state and nationals (both the tournaments he finished second), Iniyan qualified for Asian and World Youth under-8.

For further development, Iniyan met Mr. Senthilvel, who is the father of IM. S.Nitin. Mr. Senthil agreed to train Iniyan. However it was one and a half hour travel each way for the boy and his mother from Erode to Senthil sir's house. They undertook this journey thrice every week! Due to his guidance and coaching Iniyan got the Silver medal in Commonwealth U-8 (Delhi).

The boy was fast improving, but faced his first huge test at the World Youth in 2010, Greece. Due to miscommunication with the travel agent, he almost missed the interview with the Greece Embassy in Delhi. But luck was on their side. While the visa of many players were rejected, Iniyan got his visa eight hours before the departure thanks to the efforts taken by All India Chess Federation (AICF). Porto Carras, the place where the WYCC was held, was a beautiful resort. Iniyan played well and tied for the bronze in the U-8 section. Here is one of Iniyan's best games from the tournament annotated by him: 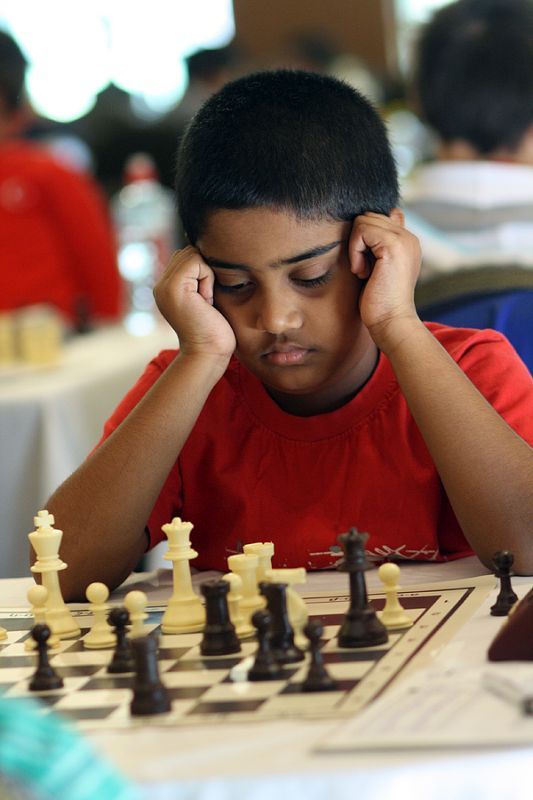 When Iniyan won the Tamil State under-9 in dominating style (10.5/11), his parents made the decision to apprach Mr. Visweswaran to work with the boy. Visweswaran, who trains strong players like Adhiban and Vishnu Prasanna, agreed to train Iniyan. From that point onwards Iniyan’s level of play began to improve a lot. 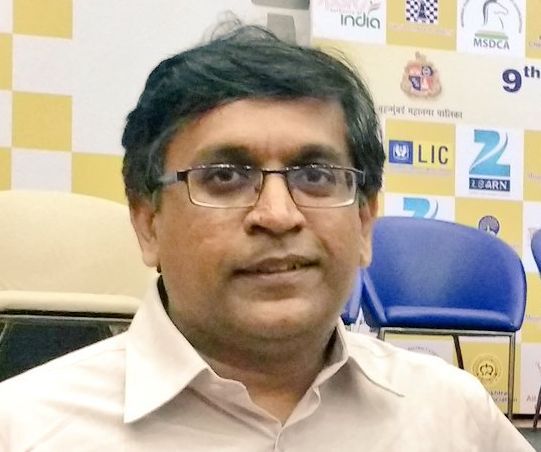 K. Visweswaran's role in the improvement of Iniyan as a player has been monumental

When the Anand-Carlsen match was held in Chennai in 2013 two players from Tamil Nadu made it big. One was 13-year-old Aravindh Chithambaram who won the Grandmaster Open ahead of many GMs, and the other was Iniyan who won the below 2100 category event with a score of 9.0/9! Starting the tournament as the 41st seed and winning the event was a big success.

By 2015 Iniyan had surpassed the barrier of 2200. A string of consistent performances helped him to do that. He won his first Open Fide Rated tournament in RSC International Open, Kochi. He lifted the champion's trophies at two Tamil Nadu state tournaments with a score of 8.5/9 and 9.0/9. This was followed by winning the National Sub-Junior Chess Championship at the age of 13! 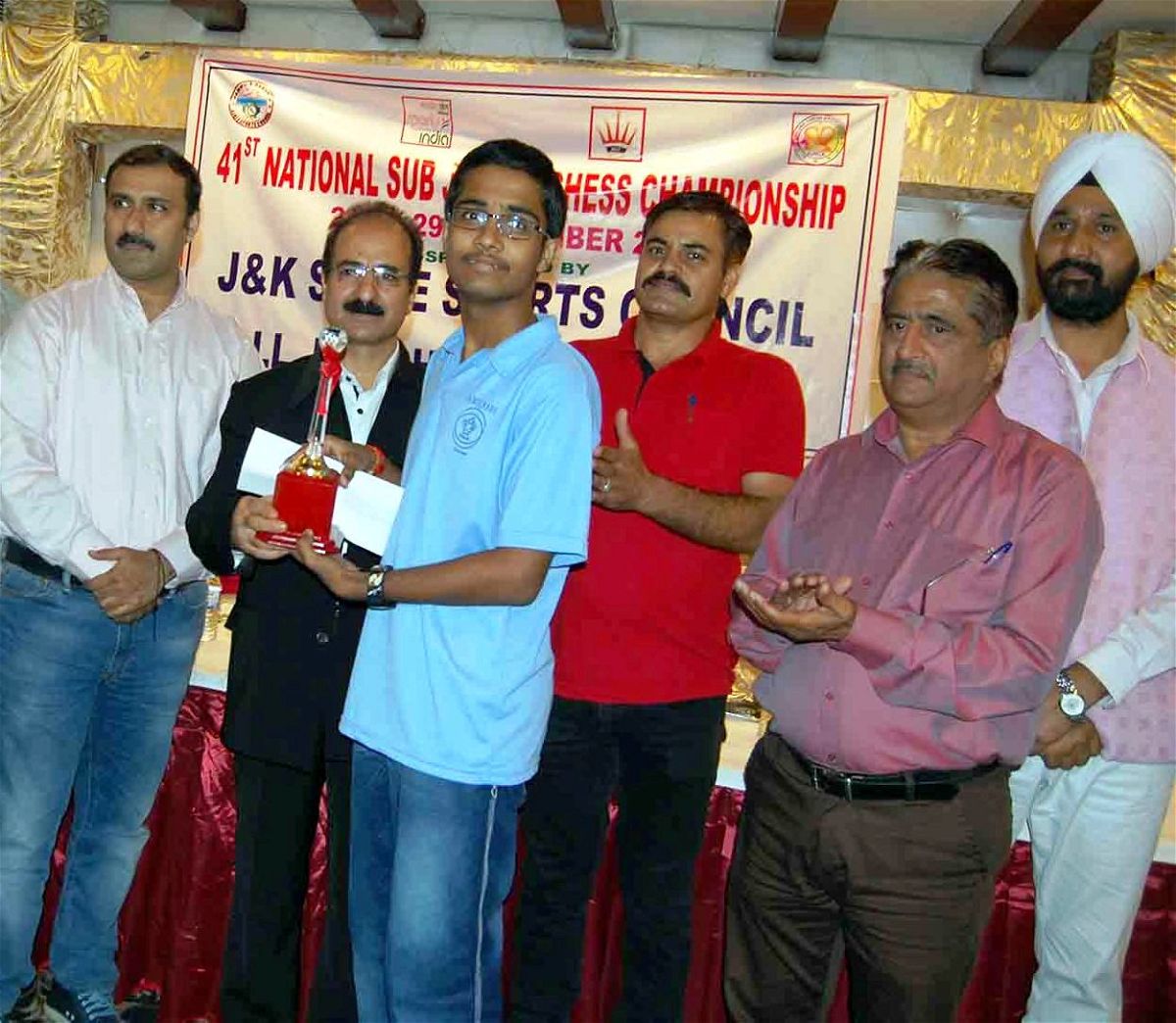 Winning the National Sub-Junior in Jammu and Kashmir with a score of 9.0/11 (Photo from the blog of R.R. Vasudevan)

With such strong performances it was now time to think about the norms and the IM title. Visweswaran adviced Iniyan to start playing a lot of norm tournaments. The biggest challenge faced by most of the chess players in playing back to back events is the finance. Travel, stay, food, entry fee, coaching, the expenses simply become too huge to handle. For Iniyan it was a great blessing that an organisation called Olirum Erodu Foundation decided to sponsor him.

Aeroflot Open was the first really big tournament that Iniyan had ever participated in. He played in the B-group and the experience gained by fighting strong opponents was unparalleled. At the Asian Sub-Junior Chess Championship in 2016, held in Mongolia, Iniyan scored 6.5/9 and won the silver medal. 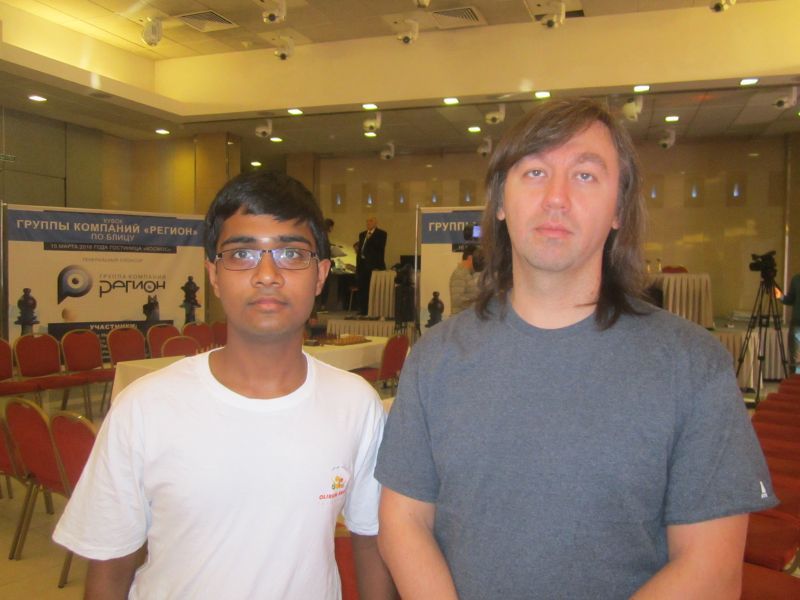 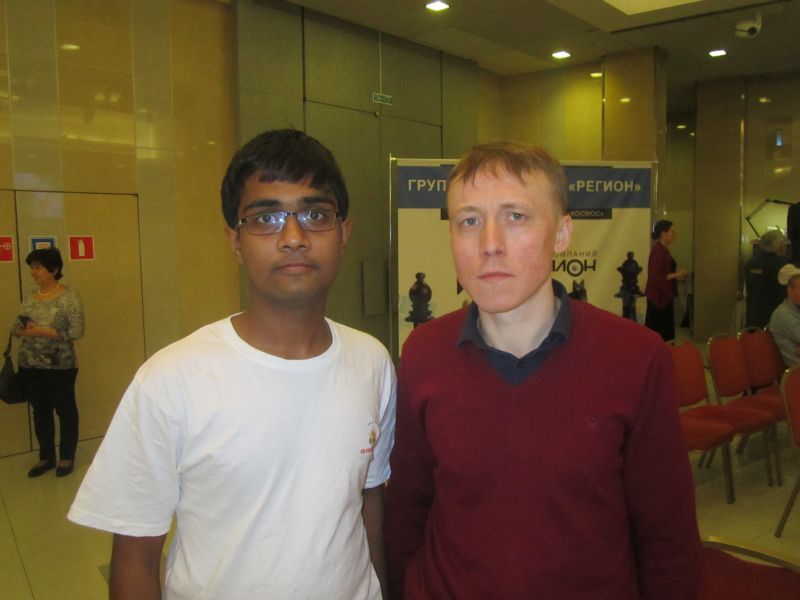 Although becoming an IM at the age of 14 seems really cool, Iniyan had to face a lot of ups and downs in the second half of 2016. The two tournaments that were extremely important World Youth Olympiad and World Under-14 didn't go the way he would have wanted them to. He had to back out from the Mumbai Open when in the last round of the KiiT cup in Orissa, he lost his health. After one month of rest he decided to play in two norm tournaments in Spain. He missed the norm in the Montcada Open, but achieved his goal in the next one - the Barbera Open. 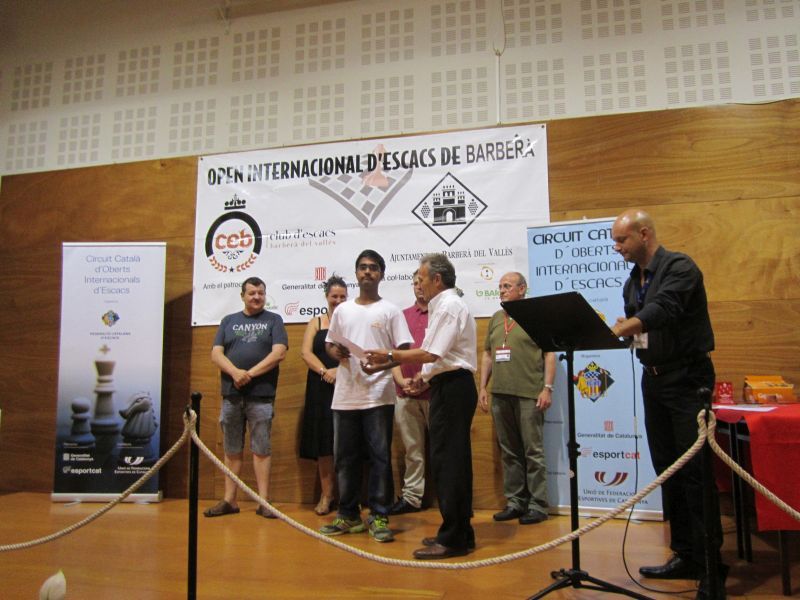 Scoring his first IM norm at the Barbera Open 2016

The final stage of becoming an International Master began when three tournaments in Europe were planned – Sitges Open, Lorca Open and Montebelluna Cup. In the first tournament Iniyan started well with 3.0/4 including 2 draws against 2600+ players, but then came the crash and he fell behind.

Although Sitges didn't really end well, the real shock was yet to come. While they were about to leave for the Lorca Open, Iniyan's laptop was stolen! ChessBase India had reported this incident: "I work with the laptop for 10 hours a day. When we are on road, we can't search for partners to play and thus it becomes our playing partner as well. I had ChessBase installed in it. It had all the data about the players I have countered, my plans, their weaknesses, my coach K. Visweswaran's inputs and my entire history from the age of seven. Losing it was a big blow."

But Iniyan didn't let this loss affect him. He played on top of his game, scored 6.5/9 and with a rating performance of 2590 made his second IM norm. In fact he missed his GM norm by a whisker! 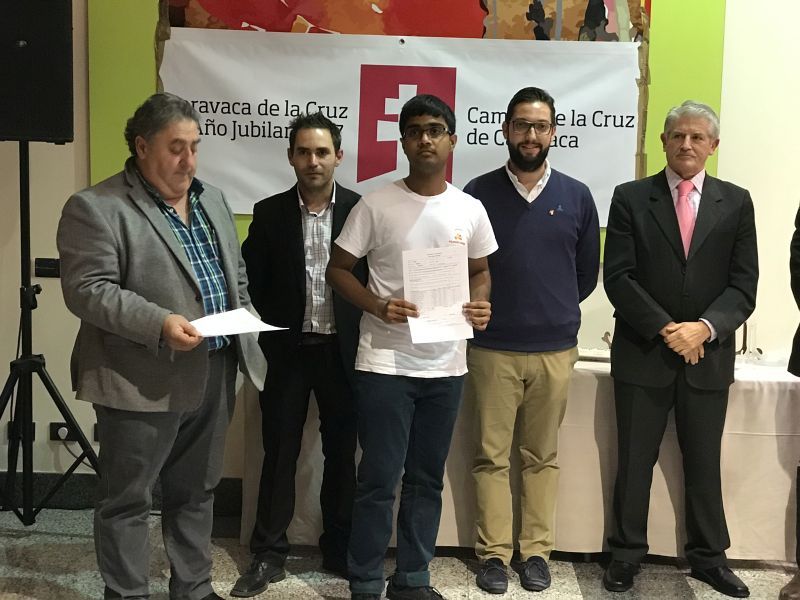 Laptop gone, but norm achieved! At the Lorca Open in Spain!

Here's one of his nice wins from the Lorca Open against GM James Plaskett: 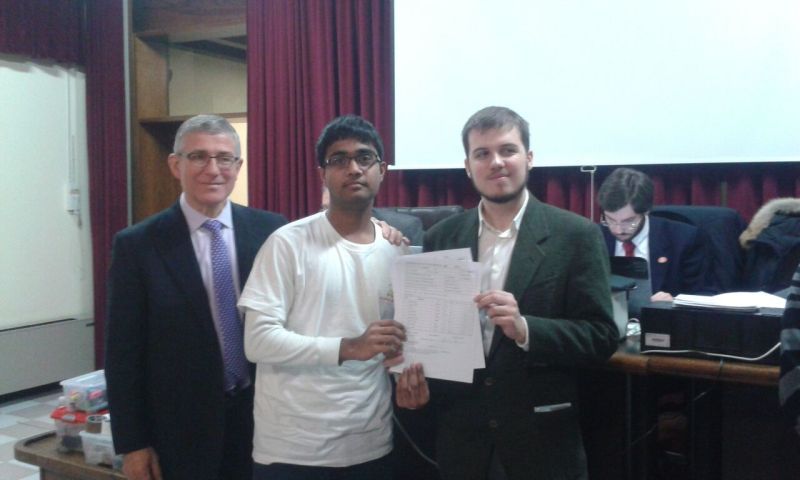 In third tournament held in Italy, Iniyan got the required 5.0/9 in the closed Round Robin tournament and got his third IM norm

Thus Iniyan became an International Master, the first one from Erode. Truly a proud moment for him and his family. His father Mr. Paneerselvam wrote to ChessBase India, "My son's story shows that belief, confidence and motivation can take you anywhere. Iniyan went to the school regularly until 8th grade, but in 9th thanks to his tournaments he hardly went to the school. I thank the management at the Indian Public School in Erode for their support. Iniyan's mother P. Saranya accompanies him to most of the tournaments. Sister Iniyakeerthi is in fifth grade in the same school. Because of the support of the family, coaches, school, sponsor and federation, my son has managed to become Erode's first IM." 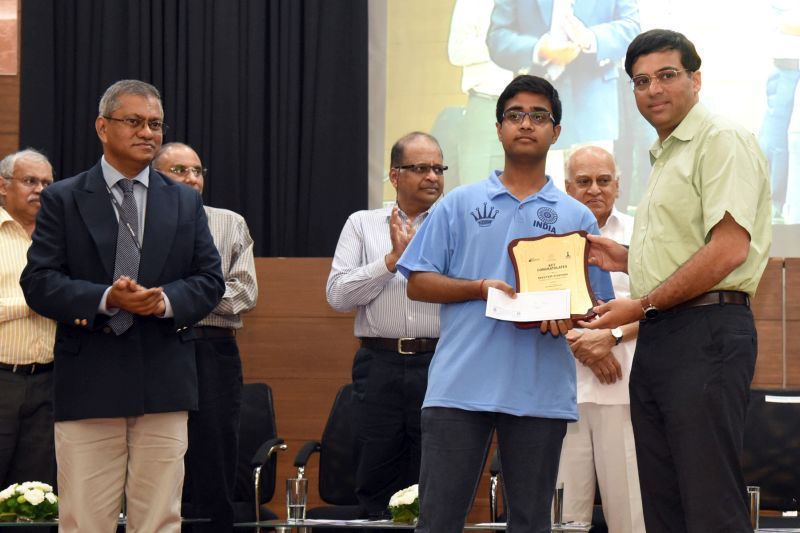 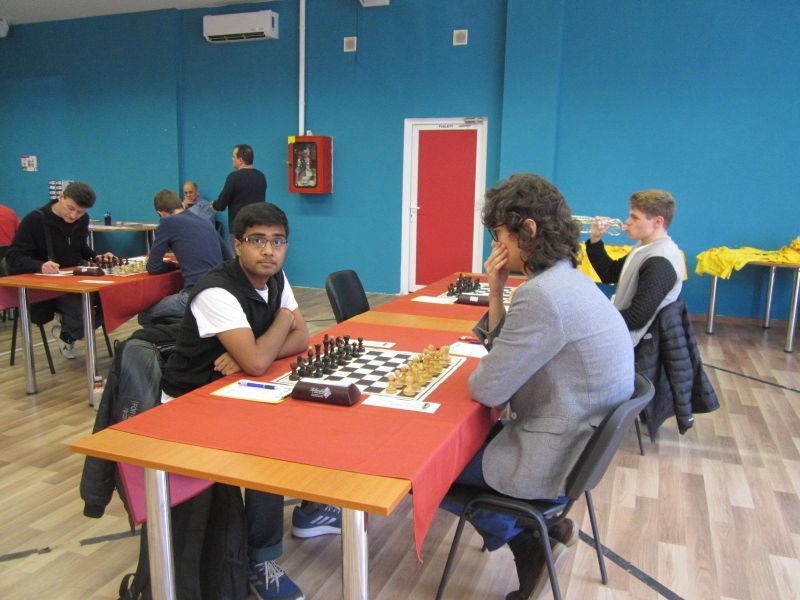 On a parting note, we leave you with a great game played by Iniyan at the First Saturday GM norm tournament in March 2017. Some very nice annotations by the boy:

As you can see a lot of ingredients have to come together in order to make a strong chess player. The talent was of course there, but the financial support, school backing, right trainers and a strong fighting spirit by the family made it possible. We hope that this continues, and Iniyan soon becomes a grandmaster. Perhaps the 50th?!

(We thank Iniyan's father Mr. Pannerselvam for all his inputs to ChessBase India for writing this article.)