High-stakes 1v1 competition is pretty rare in the chess world. Except for the World Championship, matches with huge prize money and spectators is not a common sight. We tried to change the concept- by having two world-class grandmasters play a series of games with spectators watching! Well-known Grandmaster from the Netherlands, Anish Giri, and India no.3, GM Vidit Gujrathi battled each other in the first ChessBase India Originals Death Match. How did the match go? Find out in the article. Thumbnail: Abhyudaya Ram.

Check out the full YouTube Livestream of the first Deathmatch show!

In a very close and tense match, Dutch Grandmaster Anish Giri beat the GM from Nashik, Vidit Gujrathi by a margin of 9-8. The match consisted of 3 sections- The Originals, 1 hour of Blitz, and 1 hour of  Bullet. But before the GMs entered the boxing ring wearing boxing clothes and gloves, there was an exhibition match!

Famous comedians Samay Raina, Vaibhav Sethia, Biswa Kalyan Rath, and Joel D'Souza played a hand-and-brain match against each other, with over 1000 people watching! Samay and Vaibhav formed one team, while the other team had Biswa and Joel. Both teams had 10 minutes each with no increment. Samay and Biswa were dictating which piece to be moved in their respective teams, while Vaibhav and Joel would decide what move to make. 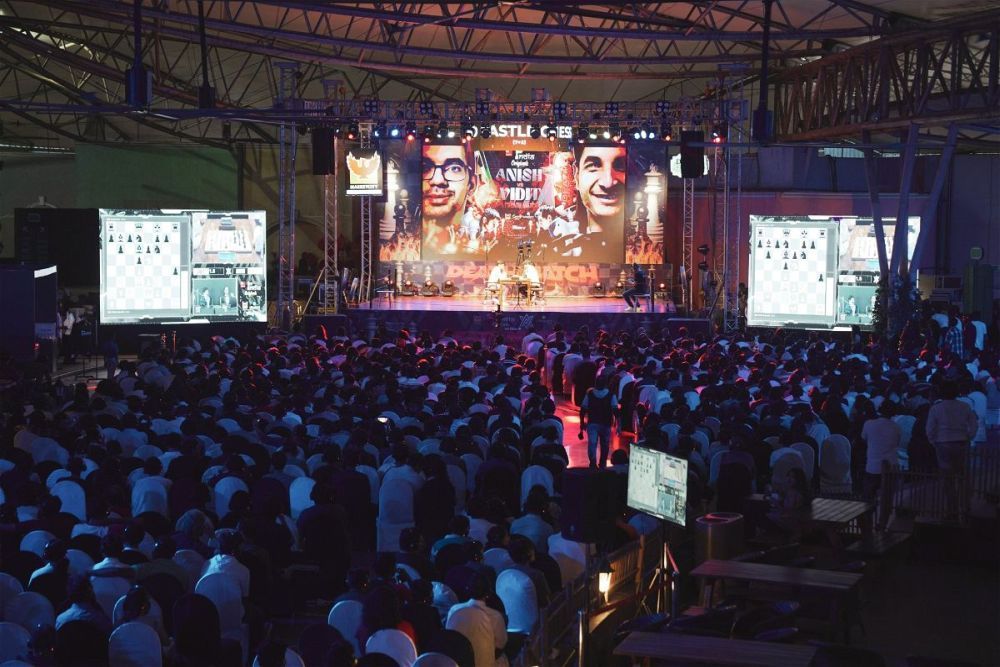 The game started off with e4 c6, and Vaibhav decided to go for 2.c4, a rare system sometimes played even by top grandmasters. 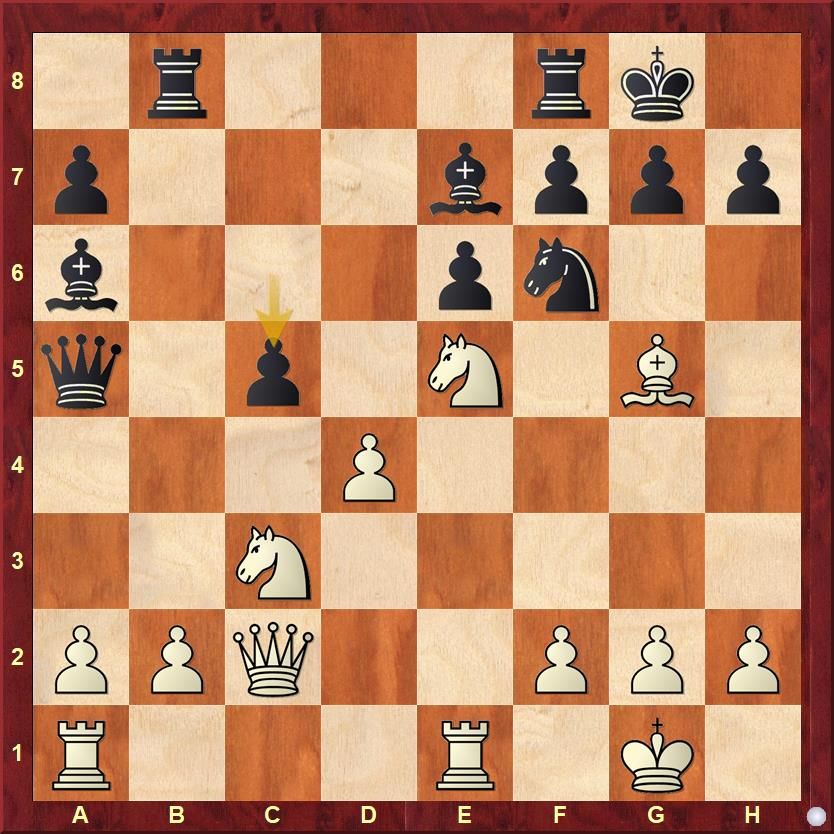 ...c5 was the decisive mistake by Team Biswa in an already worse position. Now 15.Nc6 simply forks the Black Queen and Rook. Team Samay continued with 15.Bxf6 Bxf6 16.Nc6, winning an exchange and getting a completely winning position. 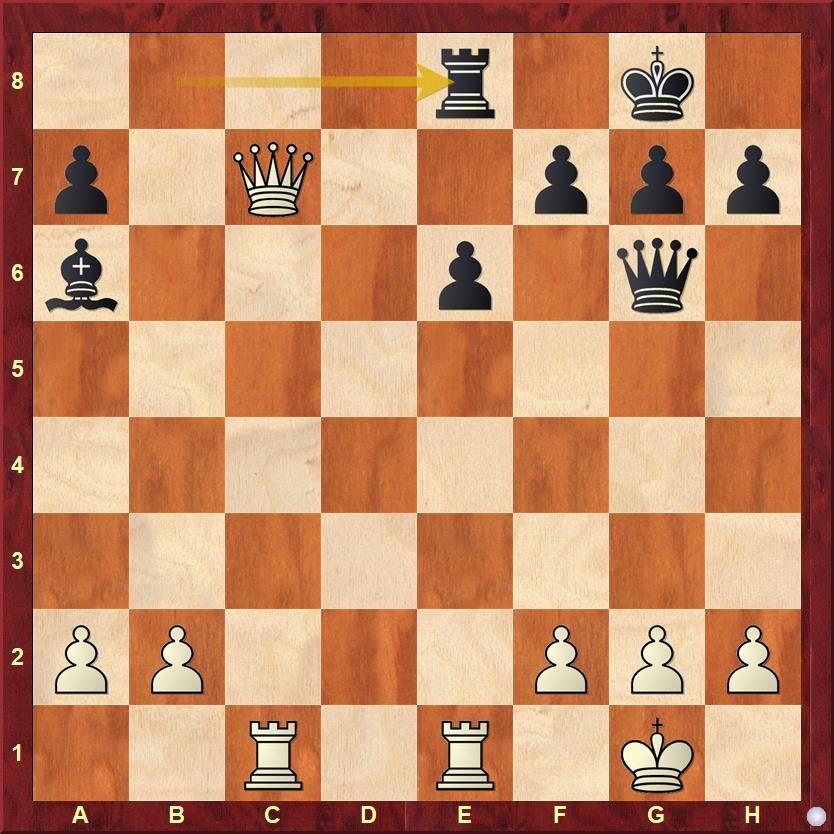 In a very short time, Vaibhav found 24.Qc6! forking the Rook and the Bishop. After 24...Re8 Qxa6, now white is up a full rook and totally winning. However, Team Samay started getting low on time from this point.

Once both the teams had less than 30 seconds, Vaibhav and Joel just started making their own moves over the board. In a crazy time scramble, Vaibhav's flag fell, and Biswa Kalyan Rath+ Joel D'Souza won the exhibition match. 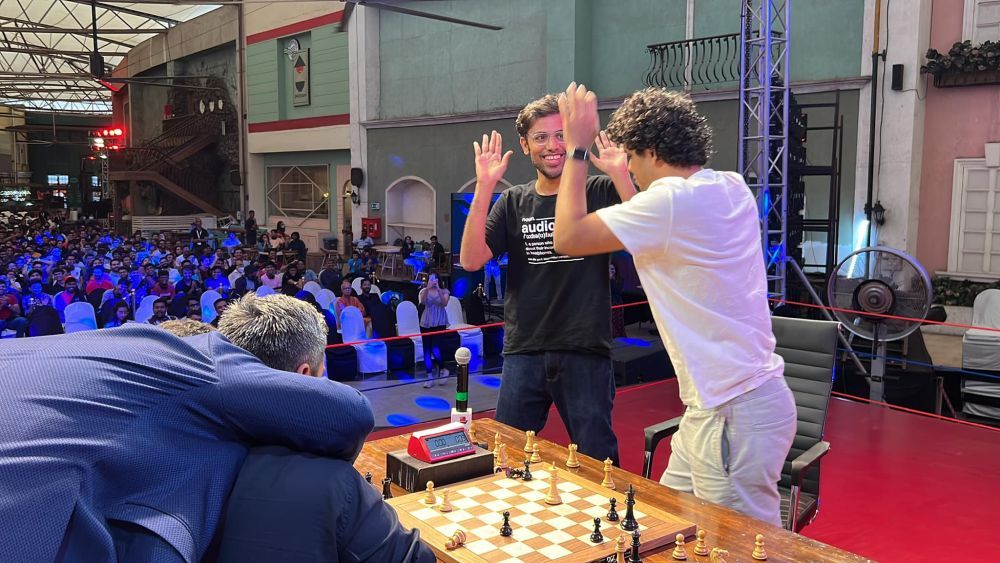 Biswa and Joel celebrate after winning the Comedians exhibiton match.
The four comedians who have made chess extremely popular in our country. L to R: BIswa Kalyan Rath, Joel D'Souza, Vaibhav Sethia, and BM Samay Raina.

Just after the end of the exhibition match, the two contenders Anish and Vidit entered the boxing ring- wearing their custom-made boxing clothes and gloves. The match started off with a 7+10 game, where the players would be blindfolded. Vidit had the White pieces, and Anish went for a very solid anti-Meran Semi-Slav. It was a relatively simple position without any significant difficulties for Black. 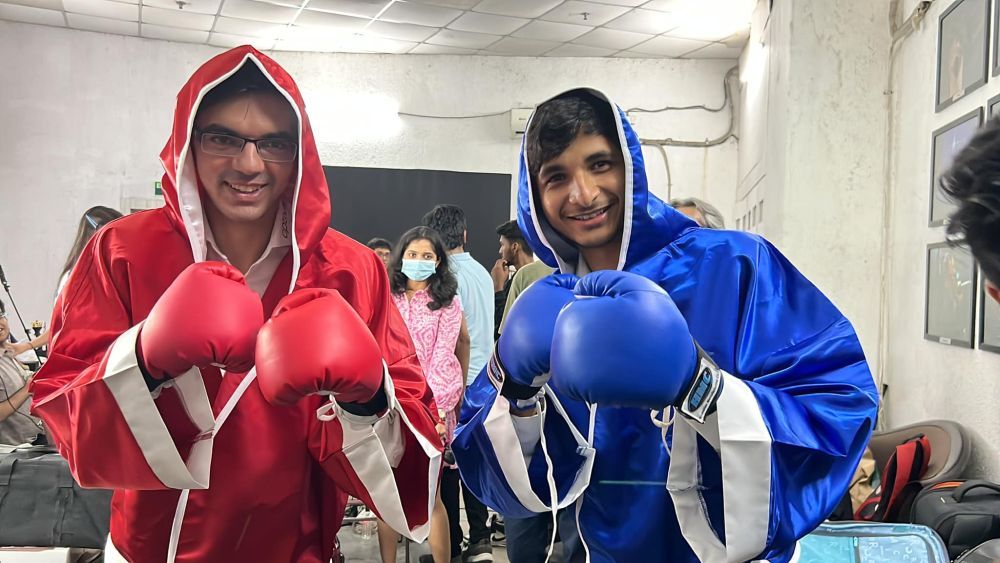 Vidit and Anish share a light moment backstage, having fun posing with their Boxing gear.
Visualizing all the pieces in your head is not a simple task. But these Grandmasters do it with ease! 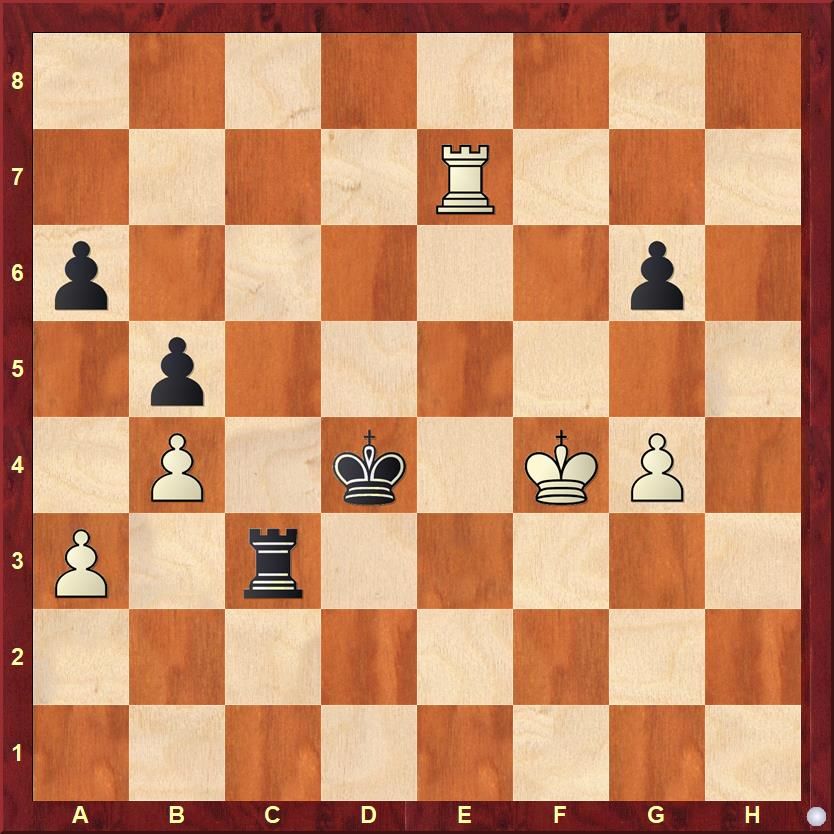 After navigating through a slightly passive endgame, this is the point where Anish makes a blunder. 41...Rc3 allows the trade of rooks with 42. Rd7+! followed by 43.Rc7+. The ensuing king and pawn endgame is completely winning for White, as Vidit's king is much faster to capture the g6 pawn and queen the g-pawn. Anish resigned the game on move 45, giving Vidit the first point of the match.

The second rapid game was a rather uneventful draw in the Italian main line Guioco Piano. The minor pieces were traded off fairly quickly, and the position was equal throughout the game. The players agreed to draw on move 50 in a Rook ending with 3 pawns each, on the same side.

In the No castling game, Anish was better for a brief moment of time but didn't find the best continuation. 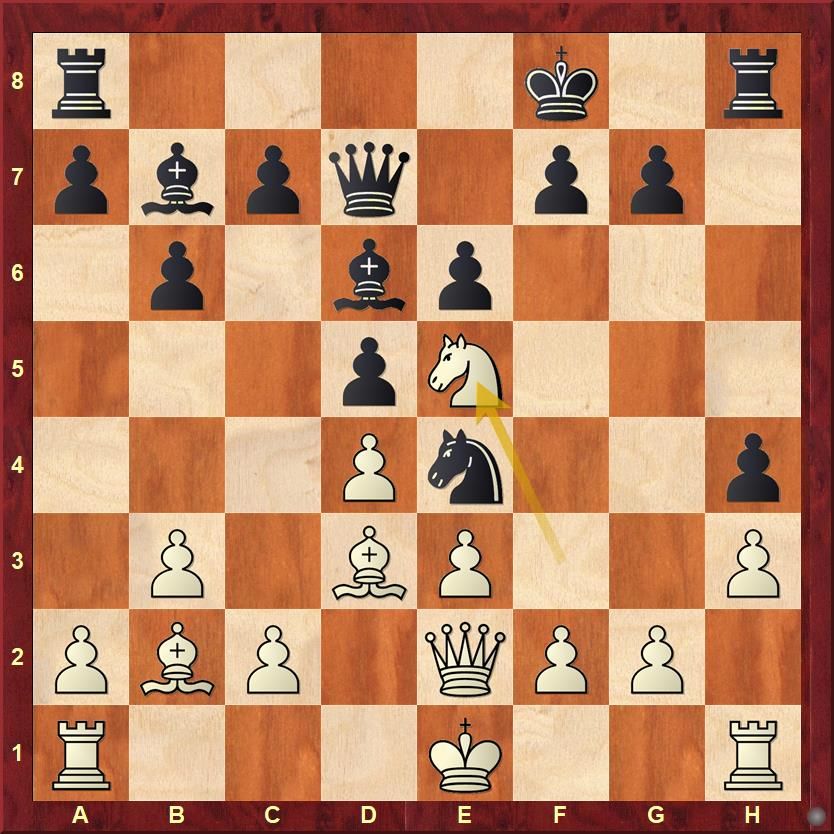 In this position, Anish went for 21...Bxe5 and White was able to solve their problems relatively quickly by playing dxe5 followed by Rd1- Kd2-Kc1. It was better to keep the bishop on the board for future attacking prospects, so ...Qd7 would've been a better move. Now white doesn't have the luxury of castling by hand in the queenside, as Qg4 attacks the already weak g2-pawn. The game went on for a long time, the players finally repeated moves to draw the game on move 82.

Vidit had the Black pieces, and got a decisive advantage early in the game but failed to capitalize on it. He got a chance again late in the game, and he didn't let it go. 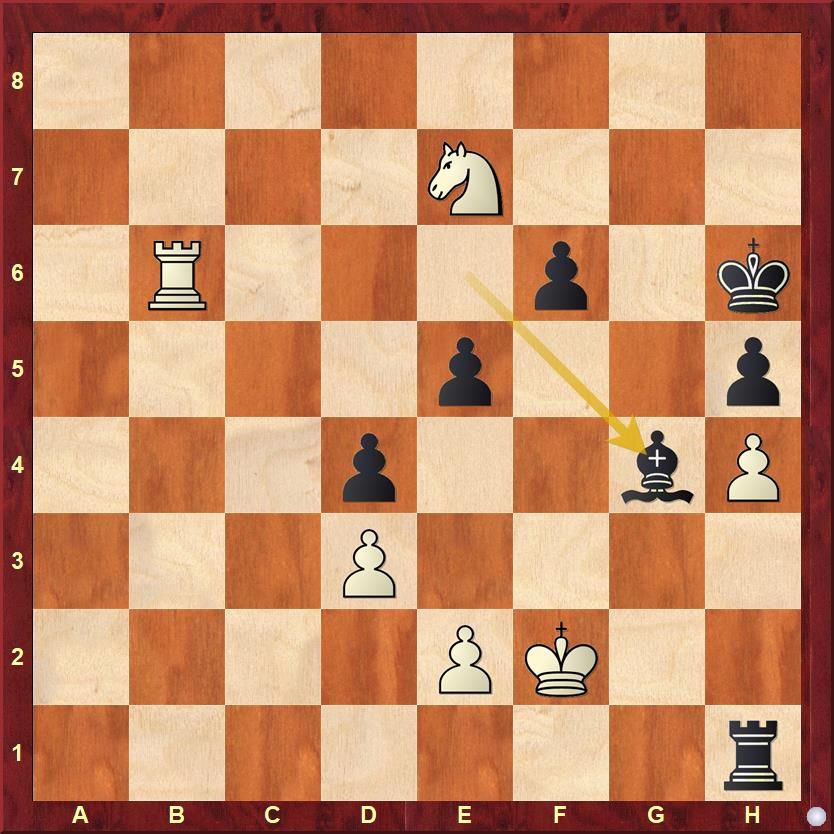 It was absolutely necessary for Anish to play 50.Ng8+ followed by Nxf6, attacking the Bishop on g4. Instead, he played 50.Rxf6+, which loses due to 50...Kg7 51.Rb6 and now White just wins a pawn with Rh2+ followed by Rxe2. Vidit converted the pawn-up ending smoothly, making the score 3-1 in his favor after the end of the first segment. 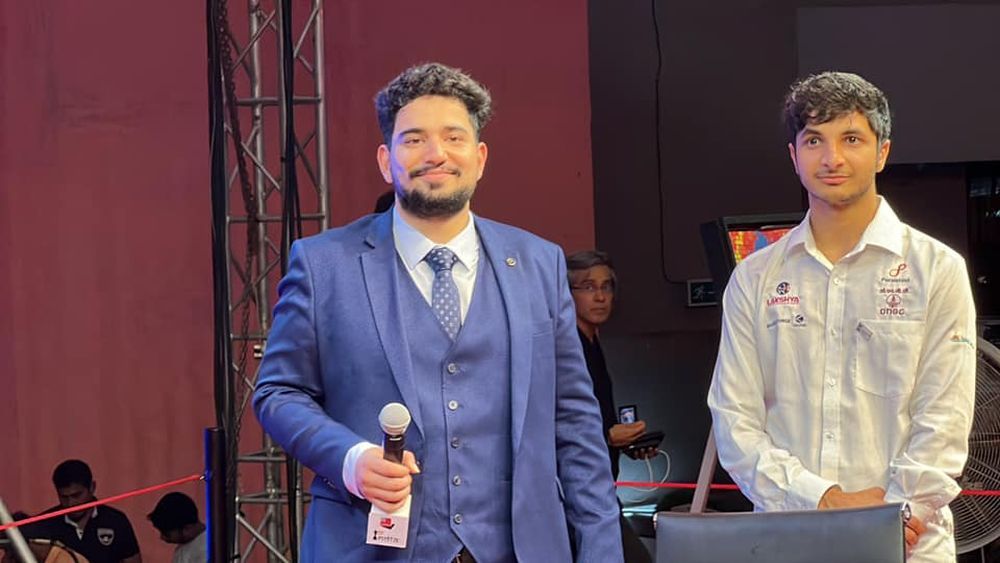 Both the players did short interviews with Sagar and Samay after each game.

The players had 1 hour of Blitz scheduled in this segment. The games were of 4+2 time control, and a total of 6 games were played in this timeframe. The first 2 games ended in a draw, giving Vidit a nice lead of 4-2.  However, Anish drew blood in the third game, reducing the lead to 4-3. 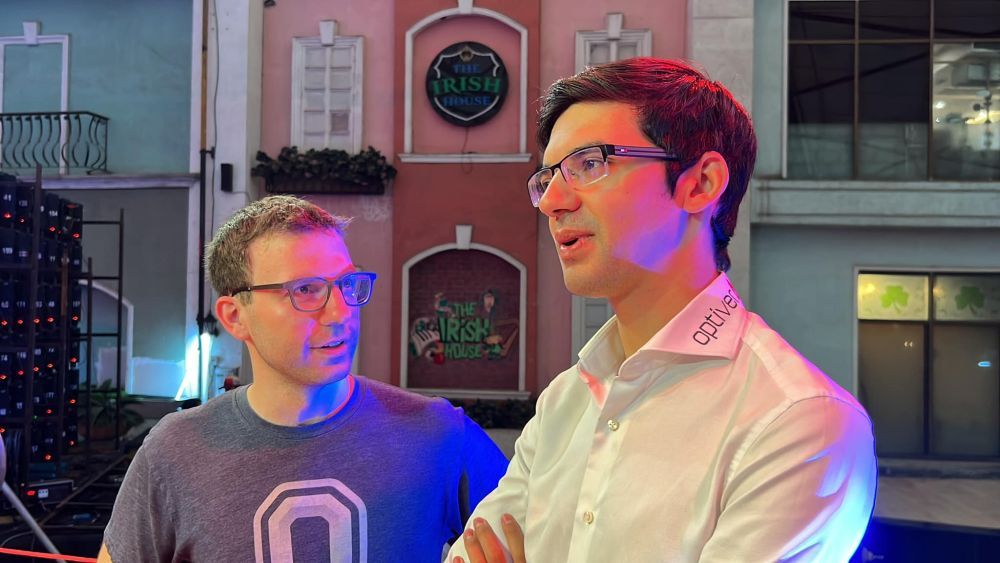 Famous Grandmaster and commentator Robert Hess also joined the live commentary and shared his wonderful insights in each game.

Blitz Game 1: The most difficult game to win, is a won game

Vidit had a favorable position in the endgame due to his more active Rook+Bishop against Anish's Rook+Knight. Soon, it turned into a winning position for White. But converting the advantage proved to be tricky. 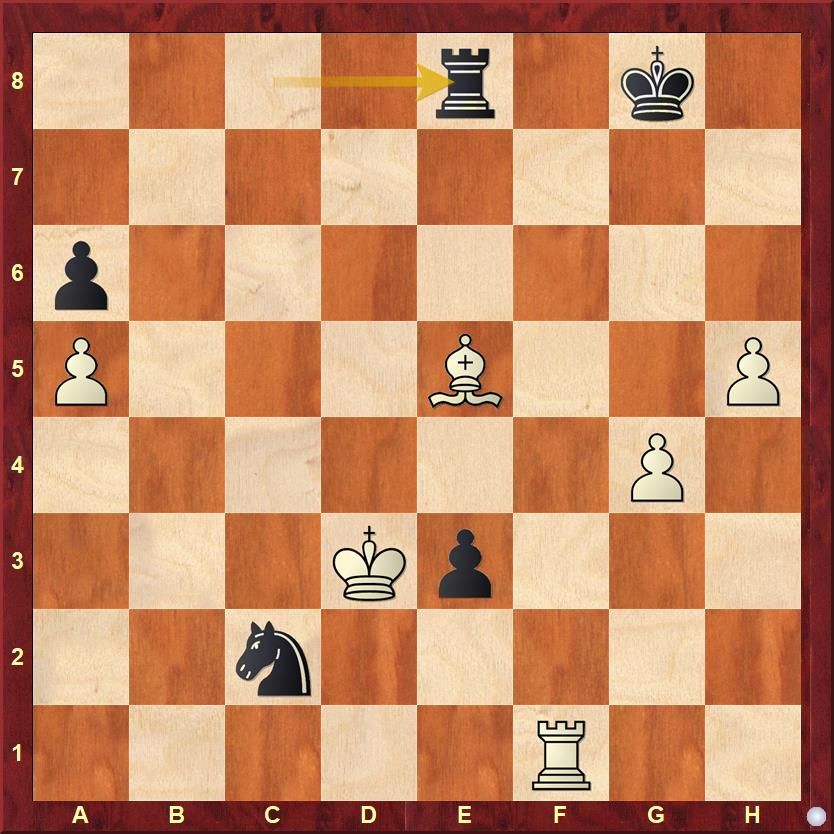 Position after 58...Re8. White to play, can you find the only winning move?

In this position, White has only 1 move which wins. It is the study-like 59.Rf5! The idea after 59...e2 is to play 60.Rg5+ Kh7 61.Kxe2 and White is completely winning with 2 extra pawns. However, Vidit was unable to find this in the game. He played 59.Bc3, which results in a draw as White has to give up the Bishop for the Black e2-pawn. 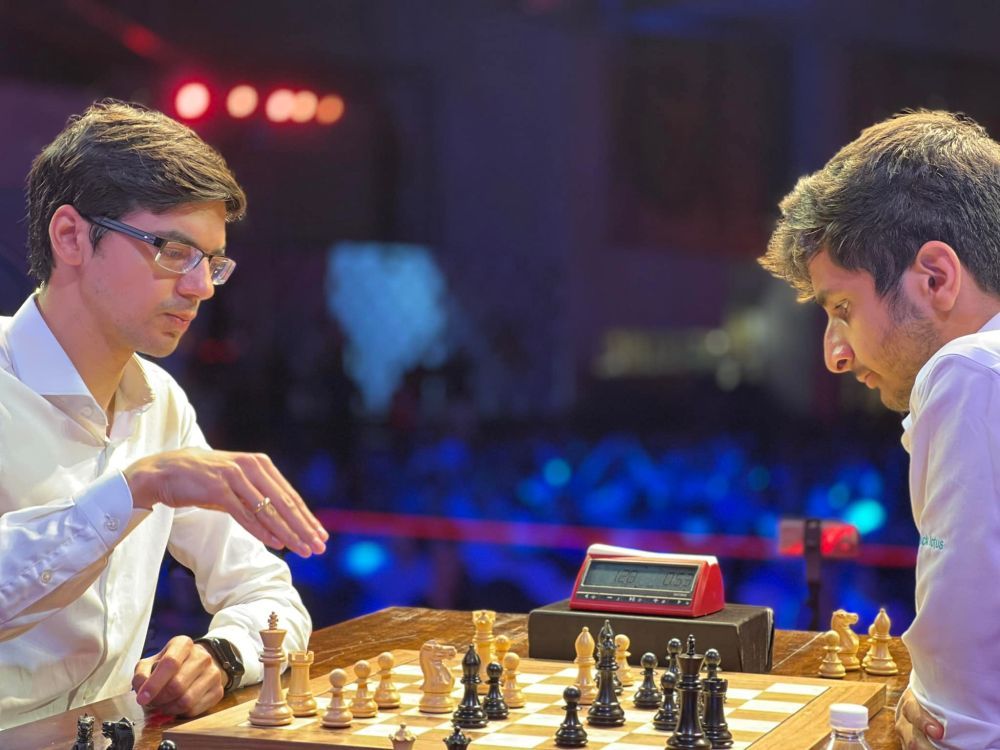 Due to short time control, many of the games featured intense time scrambles.

Blitz Game 3: The Dutchman strikes back

Anish had the Black pieces in this game and was sailing smoothly from the beginning. Black had a better position throughout the majority of the game, and Vidit finally collapsed. 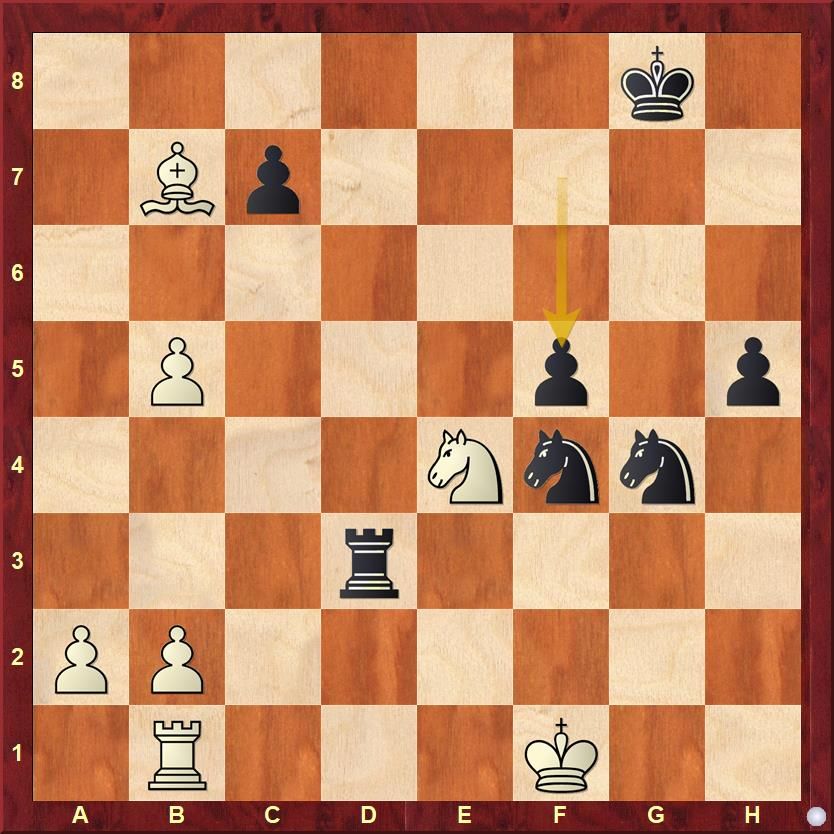 The only move which keeps the game going for White was 38.Nc3 followed by Ke1 and Rd1. The GM from Nashik played 38.Nf2, which loses on the spot to 38...Rd2! 39.Nxg4 fxg4. The connected passed pawns on the queenside were too strong to handle, and Anish checkmated Vidit in a few more moves.

In the next 3 games, Anish and Vidit won a game each, and the Round 5 game ended in a draw, where Vidit couldn't convert a winning rook and knight ending. At the end of the Blitz match, Vidit was leading the overall deathmatch with 5.5-4.5. 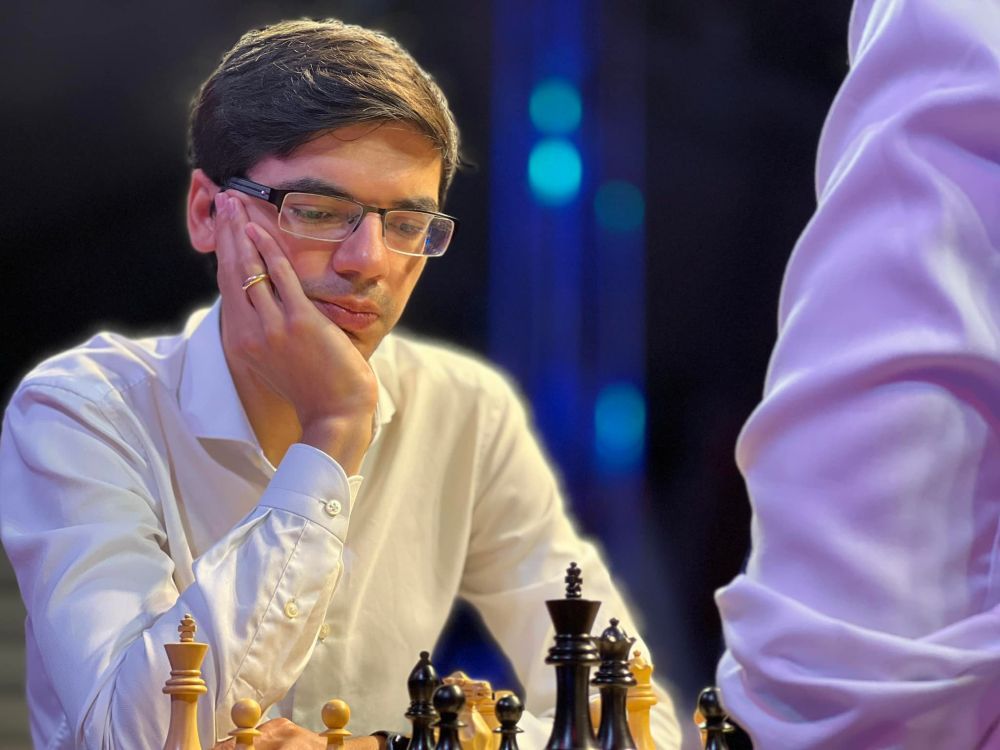 Anish closed in on the lead in the Blitz section.

The Grandmasters played 30 minutes of 1+2 bullet in the final section of the Deathmatch. There was a 1-minute break after each game. 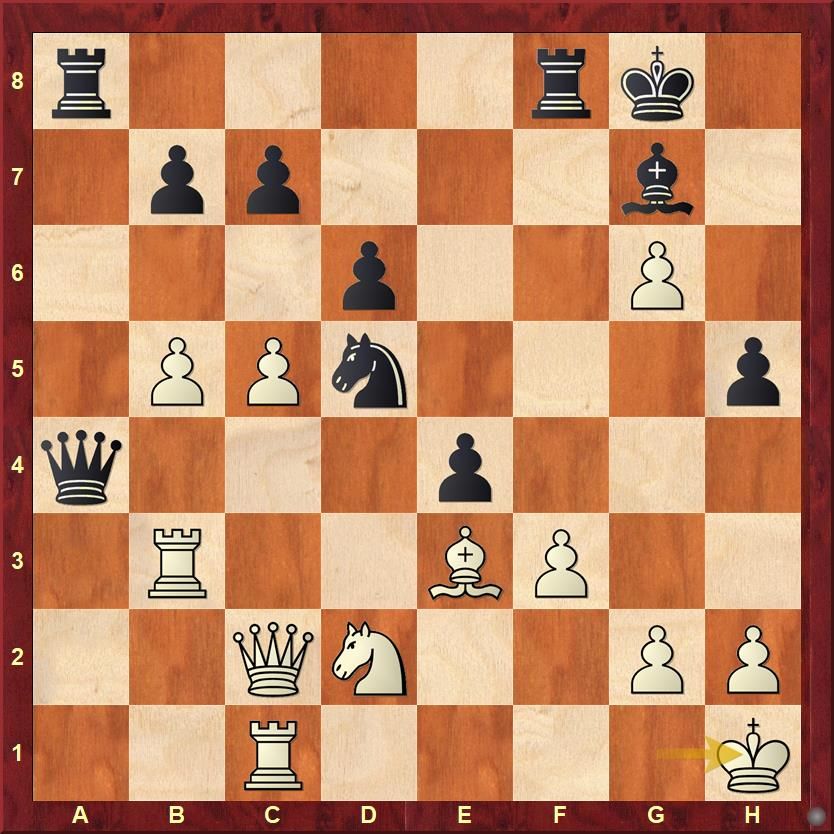 Position after 28.Kh1. Why is this a blunder?

Vidit had a decisive edge in the position due to his huge space advantage but suddenly had a breakdown. In this position, 28.Kh1 is a losing blunder, as it simply loses a piece to 28...Nxd3! The King is not safe in the back rank, so 29.Rxd3 fails to 29...Qxc2 30. Rxc2 Ra1+ with an impending mate. Anish went on to win the game comfortably. 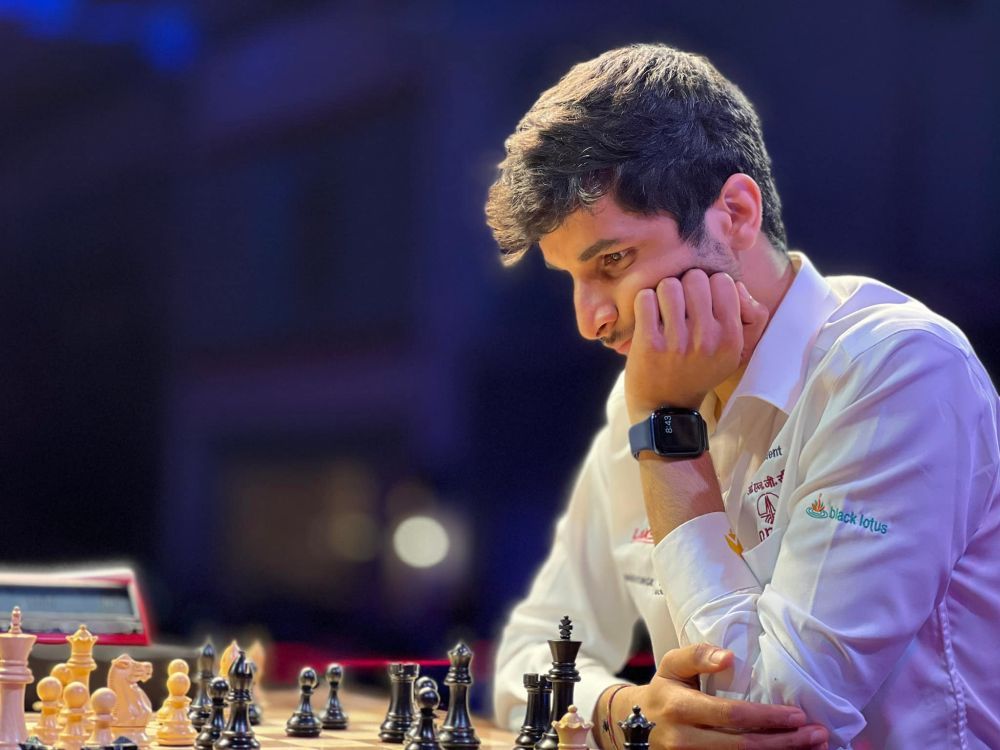 Even super-GMs are not prone to elementary Blunders from time to time.

In the next 3 games, Anish scored two victories and 1 draw, giving him the lead for the first time in the match. The score was 8-6 in Giri's favor at this point.

Bullet games 4 and 5: making a comeback

Vidit rose to the occasion and made 2 consecutive victories to level the score 8-8. His victory in Round 6 with the Black pieces was especially smooth, getting an advantage early in the game and converting it without any hiccups. 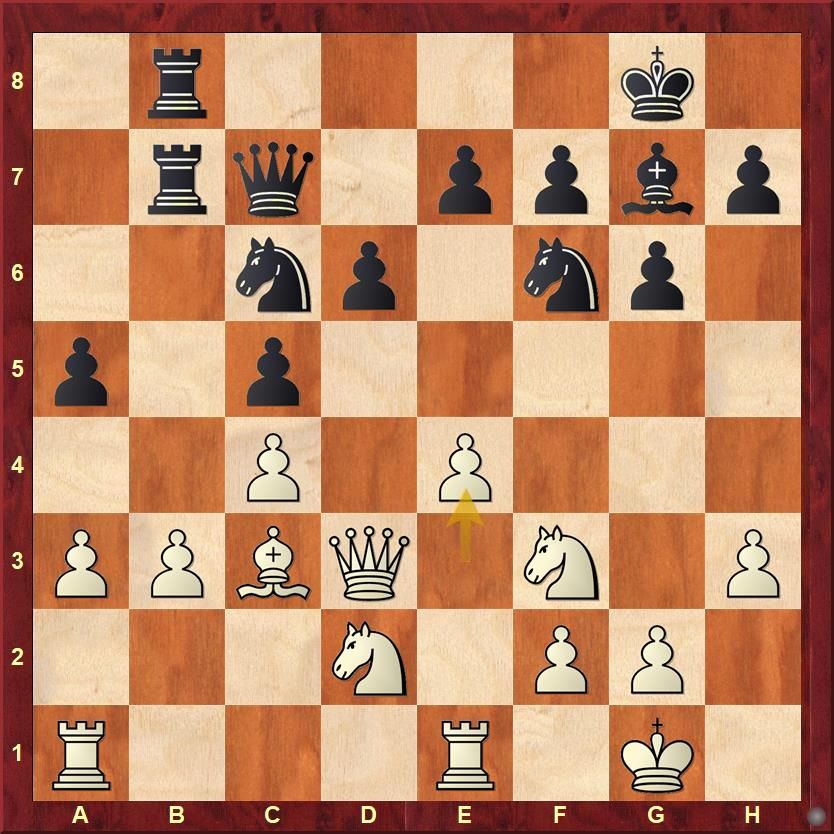 e4 is a step in the wrong direction in an already worse position. Now Black played Nh5, forcing the trade of Bishops, and went on to play e5 followed by Nf4, giving the knight a strong outpost and getting a huge positional advantage. 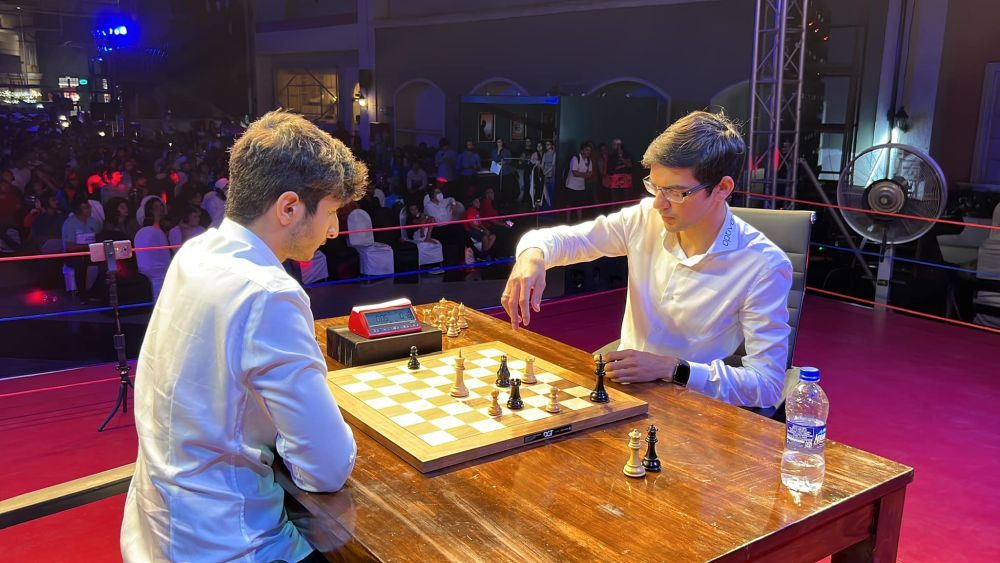 This was the deciding game of the match. In an extremely high-stakes battle, both players had the advantage at multiple moments of the game. But in chess, what matters the most is who makes the last mistake. In this encounter, it was Vidit. Under severe time pressure, Vidit hung his Bishop in the 2 bishops vs Rook endgame. 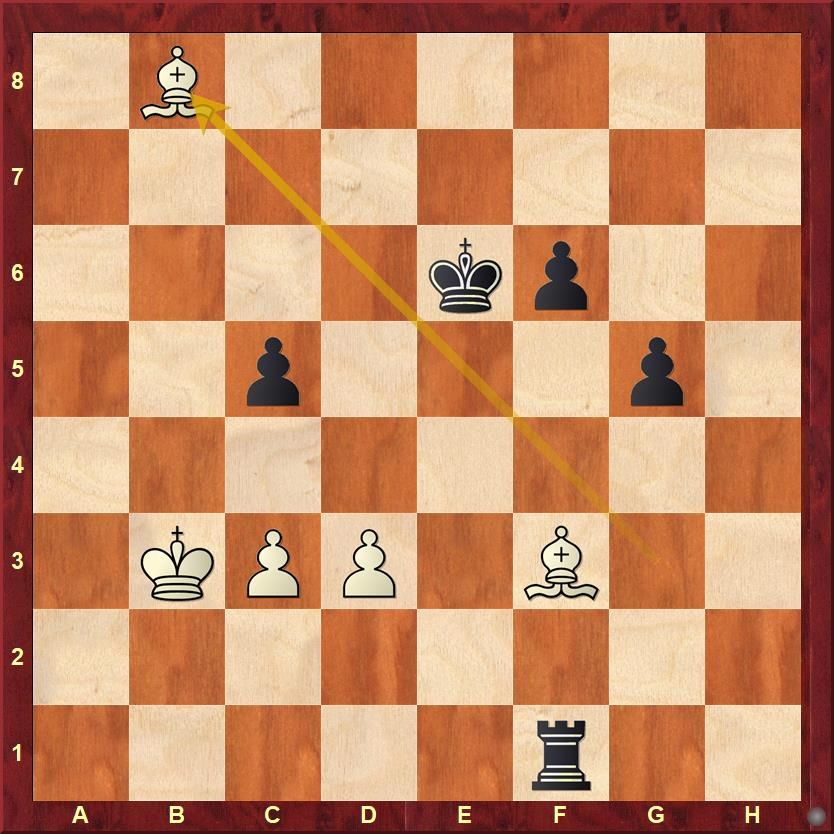 Anish Giri- winner of hearts and winner of the ChessBase India Originals! 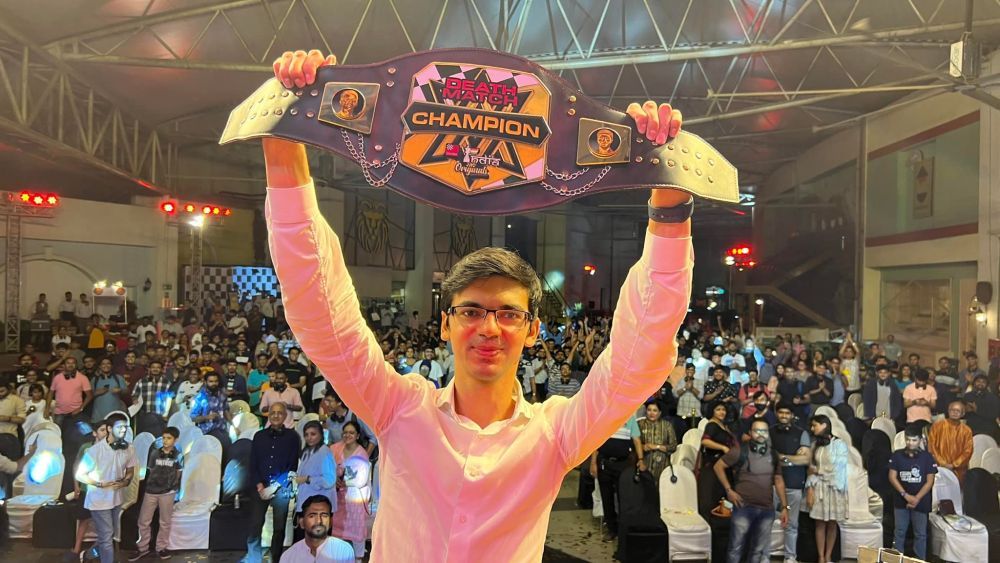 Replay all the games of the Deathmatch