India's youngest GM D Gukesh has participated in the Master Tournament of the historic Biel Chess Festival twice - 2019 and 2021. For the first time in his career, he will play in the Grandmaster Tournament (GMT) along with seven other stalwarts of the world. They are - Under-20 no.2 Andrey Esipenko, World Blitz 2013 champion Liem Le Quang, UAE no.1 Salem Saleh, 54th Biel GMT 2021 winner Gata Kamsky, Under-18 no.1 Vincent Keymer, World Rapid champion Nodirbek Abdusattorov and Azerbaijan no.5 Arkadij Naiditsch. As mentioned in the press release, Gukesh's name has been recommended by none other than the maestro Vishy Anand himself, who will also be present for a few days. Photo: Aditya Sur Roy 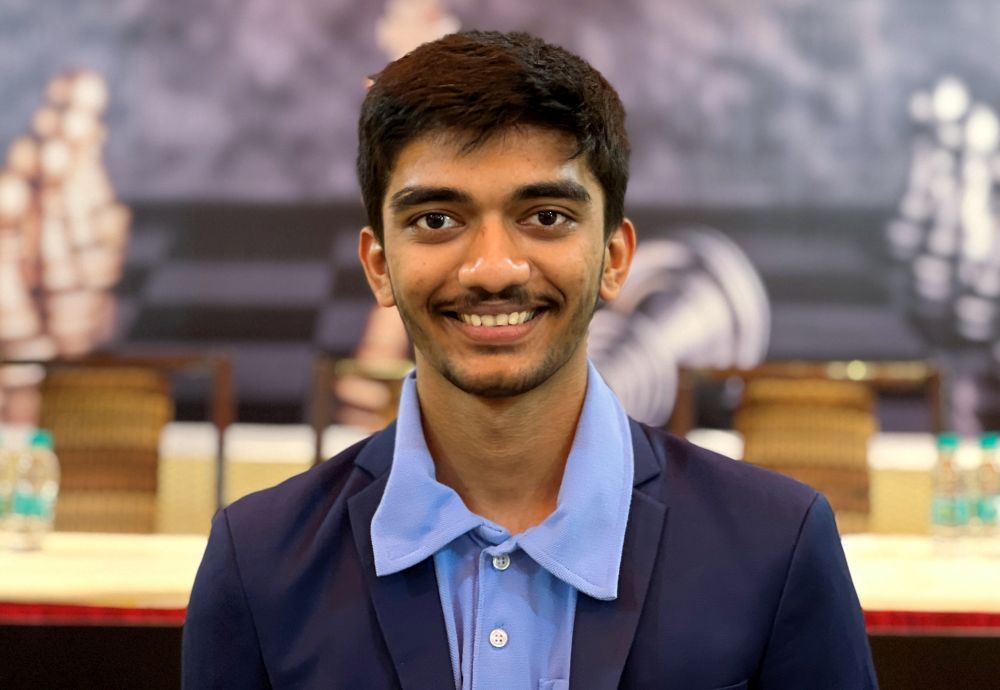 Last year, the final list of participants for our main event (GMT) could be announced only 48 hours before the official opening of the Festival. This year, it is four months in advance that we can present our elite line-up! The organizers are playing the renewal card after two years where everyone has been strongly impacted by the health crisis. In the hope of a definitive end to the crisis, they are offering chess fans a range of no less than fifteen different tournaments this summer! Also noteworthy is the introduction of an attractive prize money for amateurs who participate in the classical Open (ATO or MTO) and in minimum in two of the daily tournaments (960, QRT, QBT). Online registration will open at the same time as the Sun passes the vernal point, on March 21.

This year, it will once again be played in the sporting form of a triathlon, with the ACCENTUS 960 tournament as a curtain raiser, which will also be used as tiebreaker between players tied on points at the end of the 28 matches that the eight champions will have to play in just one and a half weeks. Below is a list of the eight participants, ordered according to the FIDE standard ranking of March 1, 2022

• Andrey Esipenko (20 years old; Elo: 2723): The U20 number 2 signed his contract already at the end of December last year. He should therefore be the big favorite of the GMT 2022, provided the Swiss authorities do not ban him from coming to Switzerland. According to the measures taken by FIDE after the outbreak of hostilities in Ukraine, the young Cossack will play under the flag of the World Chess Federation. He is one of the signatories who sent an urgent appeal to the Russian President on March 03: "We reject military practices on the territory of Ukraine and call for an early ceasefire and a peaceful resolution of the conflict through dialogue and diplomatic negotiations. It pains us immensely to see the catastrophe that is befalling our peoples these days...".

• Liem Le Quang (31; Elo: 2709): The World Blitz champion 2013 is – for the time being – no longer listed in the FIDE Elo ranking, as he has not played any official games in classical chess since March 2020. It was planned that he would come to Biel during the 53rd Festival. But it’s only after two years of Covid pandemic that the man living in the USA can finally make his first appearance at the Congress Center of the watchmaking city.

• Salem Saleh (29; Elo: 2690): The UAE number 1 is a regular in the Masters Tournament (MTO), which he won last year! Salem, who was stuck at the airport when he boarded his flight to the 2020 GMT, will be eager to take advantage of this new opportunity to showcase his enormous talent in the prestigious closed tournament.

• Gata Kamsky (48; Elo: 2658): Biel has always been a good place for Kamsky, who this year wants to defend the title he brilliantly won last year in the main event. Let's remember that Kamsky was already on the podium in Biel almost 30 years ago! In 1993, he finished second in the Interzonal, before qualifying for the final of the 1996 world championship, where he faced Anatoly Karpov for the world crown.

• Vincent Keymer (17; Elo: 2655): The German prodigy, the current U18 number 1, will be competing for the third time in a row, this time with the aim of standing on the winners' podium for the first time! Participating in the two Grand Prix tournaments in Berlin at the beginning of the year has undoubtedly given him not only the guaranty of belonging to the world's best, but also the confidence and maturity needed to pull the chestnuts out of the fire at the Triathlon 2022!

• Nodirbek Abdusattorov (17; Elo: 2651): The friendly Uzbek will make his comeback in Biel, having already participated in the first edition of the Triathlon at the age of 14 (!). In the meantime, the current U18 n°3 has been crowned World Rapid champion at the end of December 2021! With this skill, it could well be that the mix of speeds proposed by the GMT can play in his favor!

• Arkadij Naiditsch (36; Elo: 2648): The old hand born in Riga, who replaced Salem Saleh at the last minute at the GMT 2020, returns to Biel to challenge the young generation who might think, a little too rapidly, they know more that the ancients born in the last century. As Gata Kamsky demonstrated last year, in the Triathlon the veterans among the athletes can play to their strengths. Moreover, the one who lives today in Thessaloniki will be able, unlike in 2020, to prepare himself in the best conditions.

• Dommaraju Gukesh (16; Elo 2614): The U16 number 1 was recommended to us by none other than Vishy Anand, who is convinced that his protégé is already ripe to challenge the established hierarchies! Note that former World Champion Anand will be on site from July 12-15 to support his young compatriot, who could well reshuffle the cards during the entire triathlon, as he will certainly not settle for a place of honor. 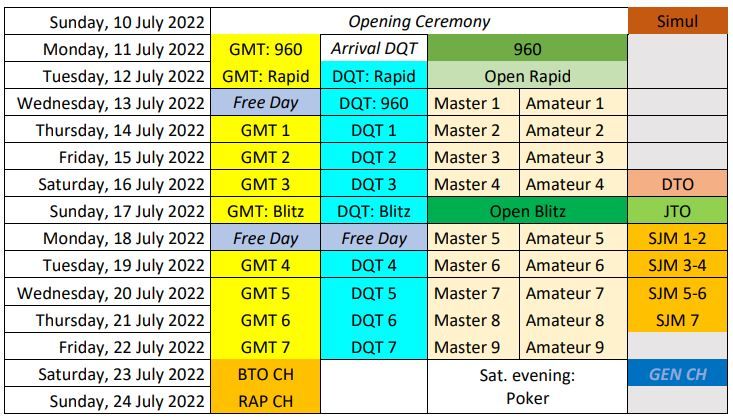 In addition to the GMT (July 12-22) and the ACC (July 11), this year's Festival offers thirteen other chess tournaments, which are briefly described here:

• An ACCENTUS Women's Quadriathlon (DAQ, from July 12 to 22): modeled on the prestigious GMT, four of the best Swiss players will participate, as well as four young foreign players of the same playing level. This will be our contribution to the "Year of Woman in Chess", which was proclaimed by the International Federation at the beginning of the year. Further details will follow shortly.

• Open Tournaments (July 13-22) with a classical time control and with the possibility of taking "byes":

○ Master Tournament (MTO): for players with 2000 Elo and more.

○ Amateur Tournament (ATO): for players with less than 2051 Elo.

ATO and MTO participants who pay the full registration fee (therefore does not apply to juniors and title holders) are eligible in the Quadriathlon if they play in at least two of the following three one-day tournaments: 960, QRT and QBT. The ranking of this richly endowed competition (CHF 900, 640, 360) is the sum of the points scored in the Open plus the two best results in the three one-day tournaments.

• 960 (July 11): The first one-day tournament of the festival, the Fischer Random, is for amateurs. Points earned will be considered in the Quadriathlon

• Final tournaments of the Swiss Youth Individual Championship (SJM, July 18-21): The qualified finalists of the U16, U14, U12, U10 and U8 meet for the third time in a row in Biel and fight for the gold medal in their respective category.

• Intergenerational Tandem Tournament (GEN CH, July 23): Team tournament with two players, either from the same family (child + parent or grandparent) or with an age difference of at least 25 years between the two members of the team.

• JTO (July 17): free tournament for school children, supported by the Vinetum Foundation, which offers not only the prizes but also lunch for all participants!

• If a poker tournament is planned at the end of the Festival (Saturday, July 23), the very first chess tournament that we propose is the traditional simul exhibition (SIM, Sunday, July 10, 4 p.m.), which will take place two hours before the official opening ceremony and will be given by Abhimanyu Mishra, the youngest current Grandmaster of all time.