The round one tiebreaks at the World Cup 2019 was an intense one. Due to the shorter format of the games, there were quite a few errors. Sethuraman and S.L. Narayanan were the first ones to get knocked out as they lost in the 25'+10" section against Nabaty and David Anton respectively. Ganguly and Abhijeet Gupta gave a tough fight to their opponents, but when the 10'+10" section had ended both of them had to bite the dust against Fedoseev and Korobov respectively. There was only one Indian who managed to hang in there right until the very end - Aravindh Chithambaram. He played a marathon 8-game match with world class GM Michael Adams and came out on top with a score of 4.5-3.5. Check out the match with the key moments in our report.

I first saw Aravindh in 2008. The youngster was just 9 years old. Over the years I have seen him grow from a young talent rated around 2000 to a world class grandmaster, now solidly rated over 2600. There are many qualities of Aravindh that I could mention here, but let me quote the most recent one. I went to the Commonwealth Championships in July 2019 as a journalist. When I met Aravindh, I asked him if he would like to give me an interview about how his tournament had gone until that point. "Bhaiya (brother), we will do the interview after the last round," said Aravindh. I smiled and wished him luck. I knew that on the last day he would simply run away! Aravindh just didn't like facing the camera. But on the last day after he had won the silver medal, Aravindh came to the press room before the closing ceremony. "Bhaiya, let's do the interview!" I was extremely surprised. I quickly got hold of my camera and microphone before Aravindh would change his mind. This is how it went:

A rare interview with Aravindh Chithambaram

As Aravindh went away I realized why he had come on his own for the interview. Of course, he wanted to keep his word, but there was one more reason. In the past, whenever Aravindh faced the camera he would be very nervous. Well, giving the interview was not something he would have liked, but he realized that the only way to face his demons was by actually facing the camera! After the interview ended we rushed to the prize ceremony and I told Aravindh we should be doing this at the end of every event he plays! "We will see!" was his reply. This is the thing about Aravindh - he tries to learn on the go and and he tries to fix his weaknesses. Let's have a look at how he applied this at the World Cup 2019. 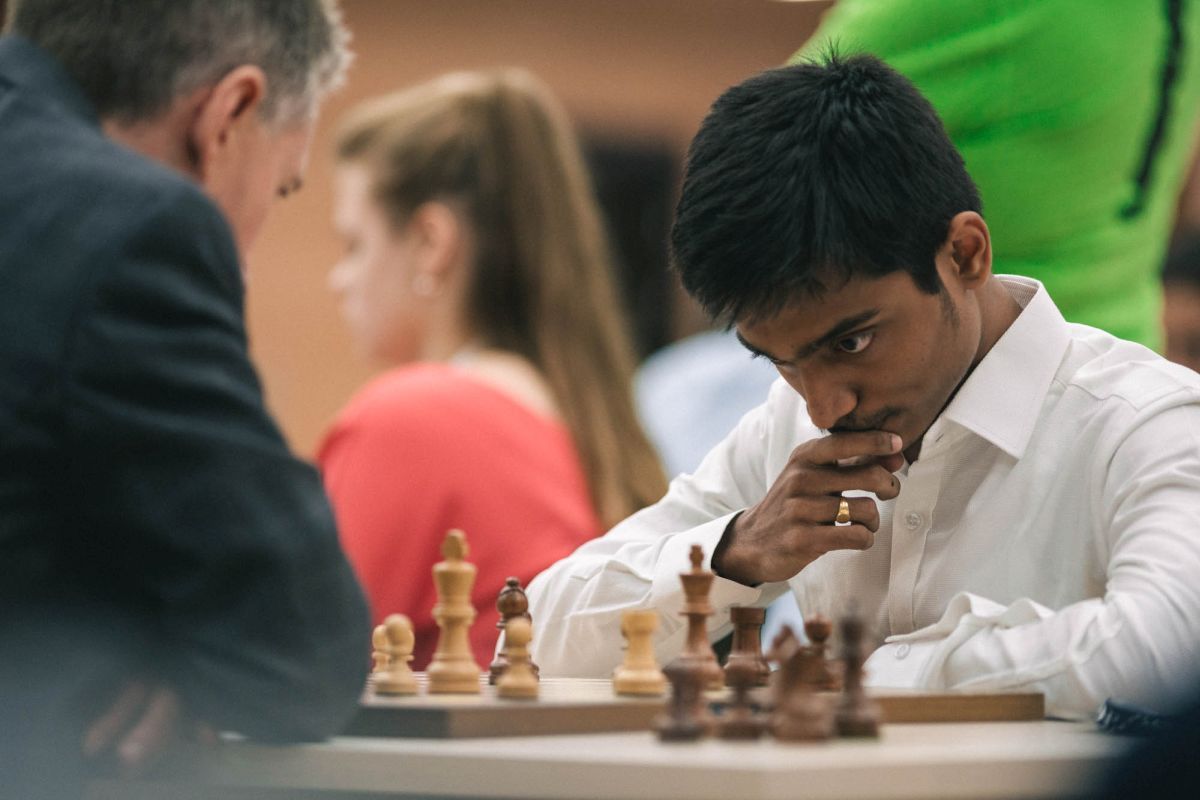 In the first game of the match Aravindh decided to go all out against his opponent. He went for the f3 line in the Nimzo Indian and tried to play in the most aggressive manner. Michael Adams, being Michael Adams, a world class positional player, tackled Aravindh's premature attack in a precise way. Before you knew it, Aravindh was totally lost. 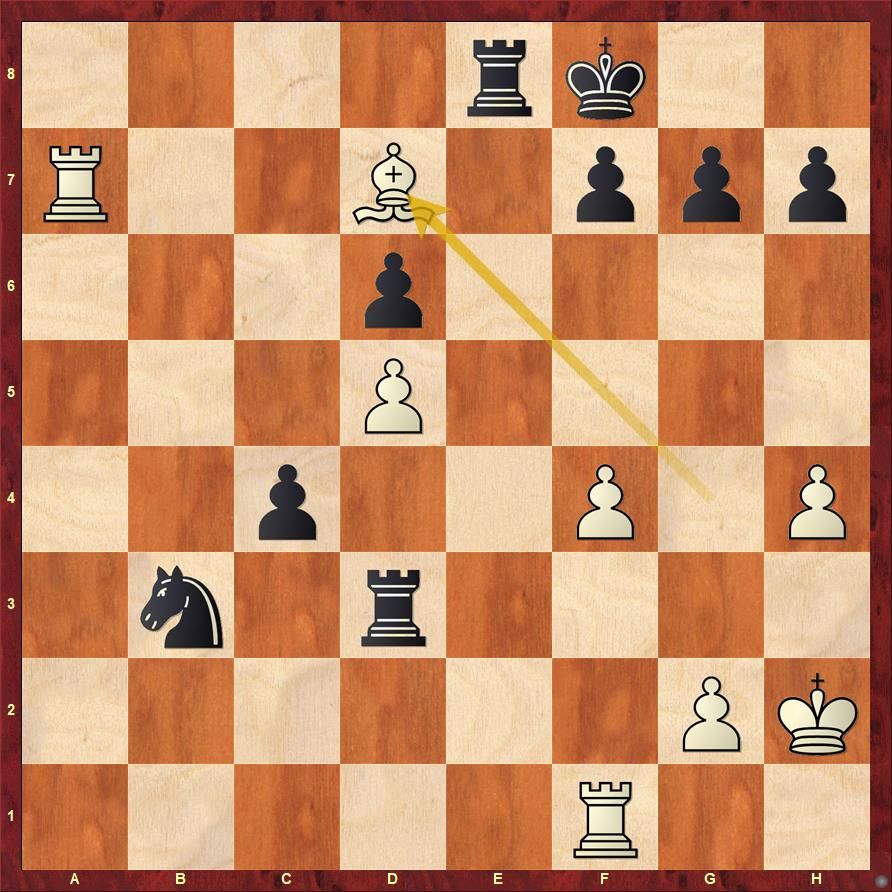 If Adams would have played ...Rb8 here he would have most probably sailed through to the second round. As it turns out, he went Ree3 and after Bb5 he committed another inaccuracy with Rc3. Aravindh grabbed his chance and pushed his pawn forward with f5! 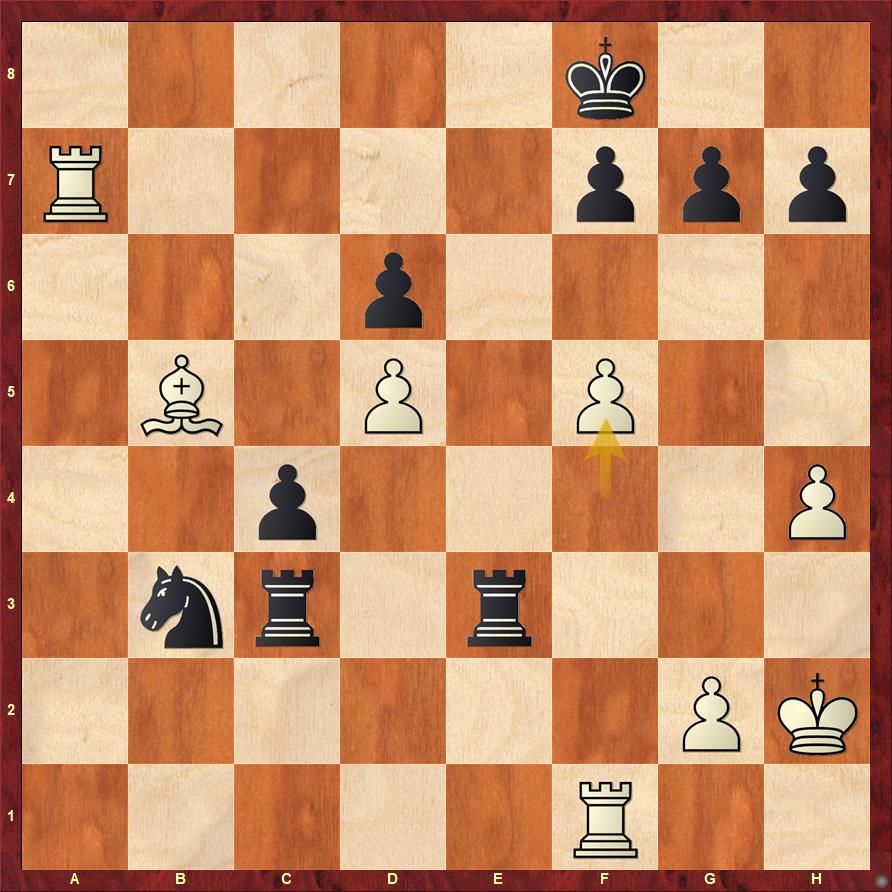 This was a big escape for Aravindh. He had just snatched the draw from the jaws of defeat! But it is one thing to get a rude awakening and quite another to change yourself, so that you don't get another! Many players are unable to adjust themselves so quickly, but for Aravindh is not a problem. He quickly realized that these premature attacks are not going to work against an experienced player like Michael Adams. He had to be patient. He had to wait for his chance. And from there the long siege began. The second classical game witnessed the Italian and was a quick draw. 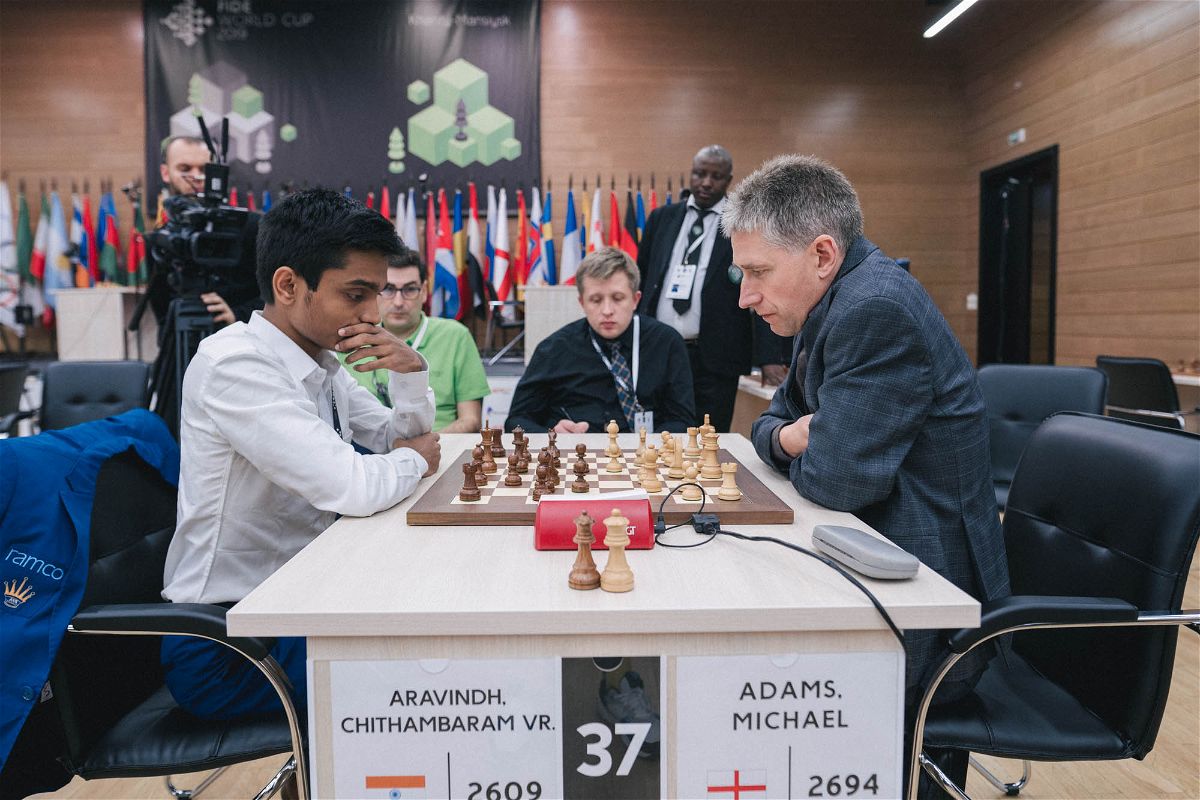 The settings for the tiebreak!

The rapid tiebreaks began with the Open Ruy Lopez. Aravindh with the black pieces was well versed with theory and drew the game with absolute ease.

In the second game we saw the Queen's Gambit Declined line which looks aggressive on the surface, but Adams has spent years upholding Black's position in it. 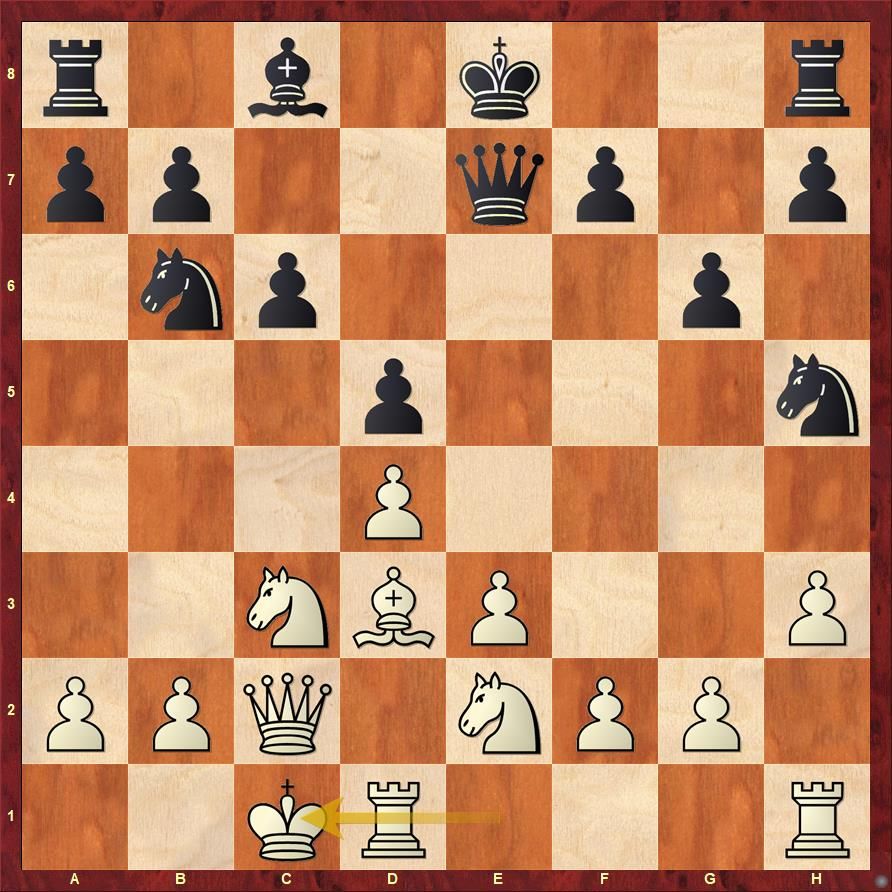 White's long castle idea looks quite aggressive. And this truly would be the case if Black short castled here. But Black's intentions are quite clear. He will move his bishop from c8 and 0-0-0. 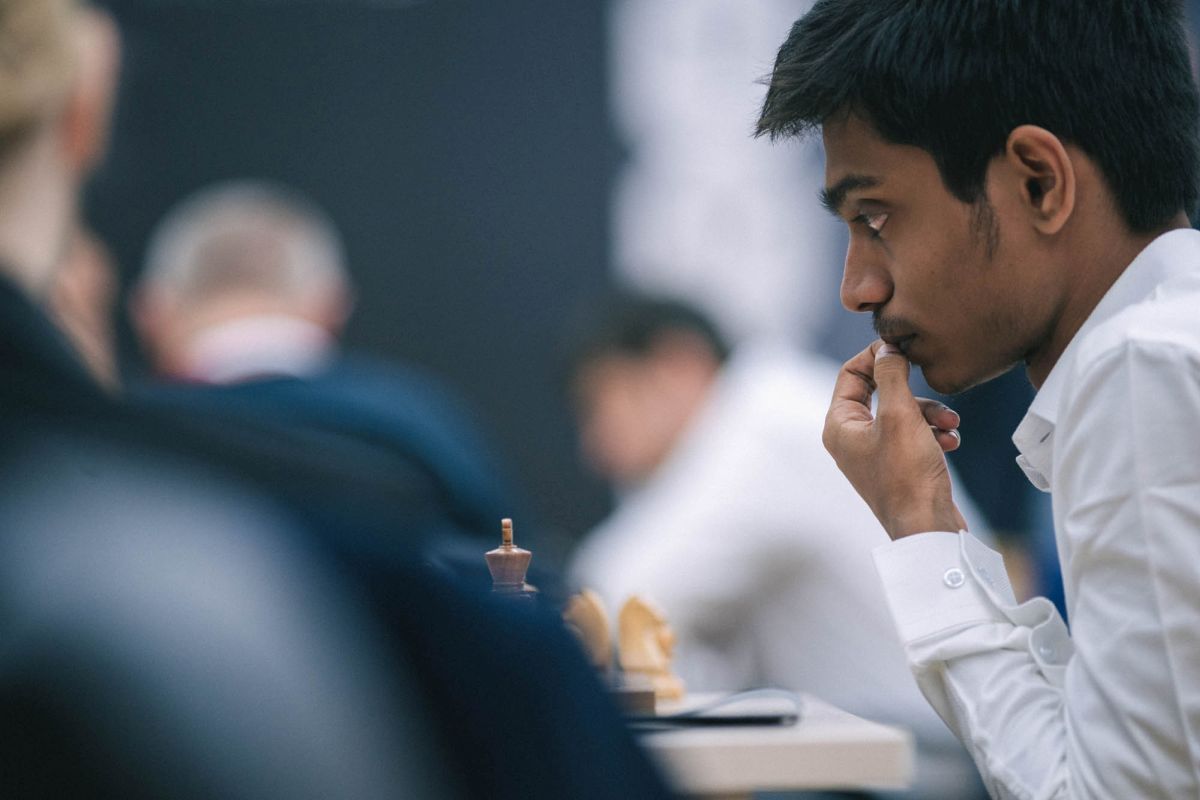 It was once again the same line in the QGD. But this time Aravindh was slightly more aggressive. He got some chances on the queenside, but they weren't anything special. Adams won a pawn in the rook endgame, but his king was cut off on the a-file. With no way to make progress, the players agreed to a draw.

The second 10'+10" game and overall the sixth game of the match was the most exciting. Adams started to play a little more aggressively. and after 34 moves had already won a pawn. 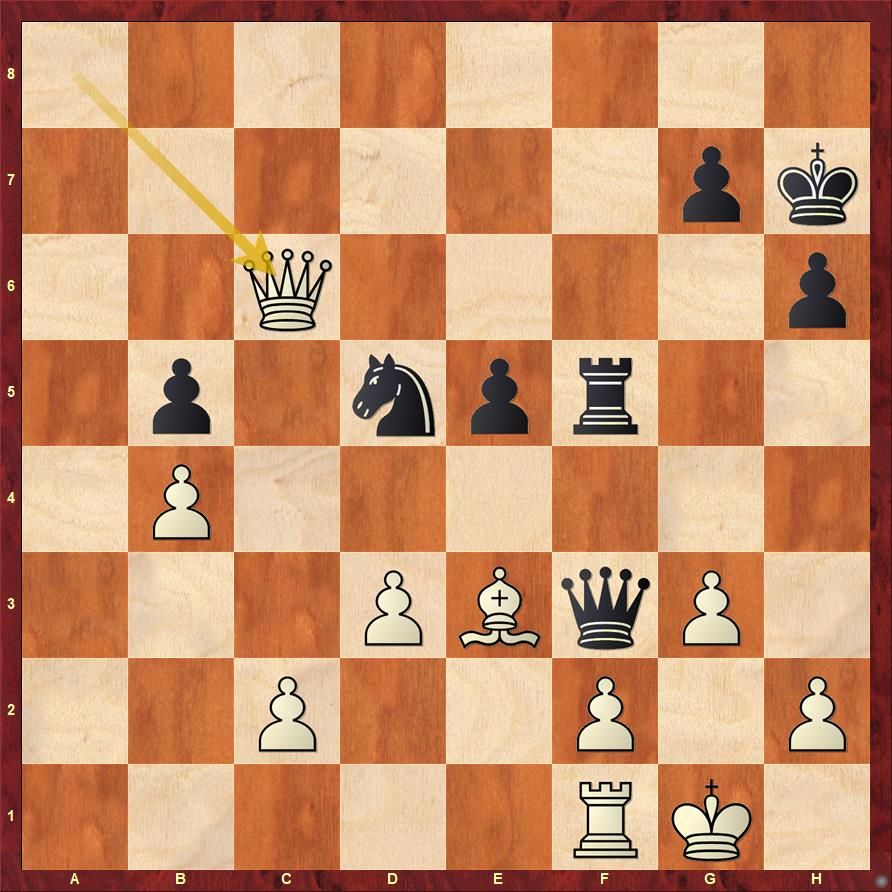 Aravindh was running low on time and was a pawn down. But look at his resourcefulness. First he played ...e4! now the threat is to take on e3. Adams played the move Qc5 defending his bishop. Aravindh now went ...Rh5, threatening Nf4! You can see how the Indian youngster was constantly posing problems to Adams. At the age of 47 you cannot really continue to keep playing at a high level for a long duration (unless your name is Vishy Anand!). This game finally ended in a draw.

Just look at the intensity! Aravindh never gave up no matter how low he ran on the clock or how bad his position was!

When it comes to blitz mistakes are inevitable. In the first game, Aravindh with the black pieces was holding the position pretty well until he gave up a pawn to go into a 4 vs 3 rook endgame. 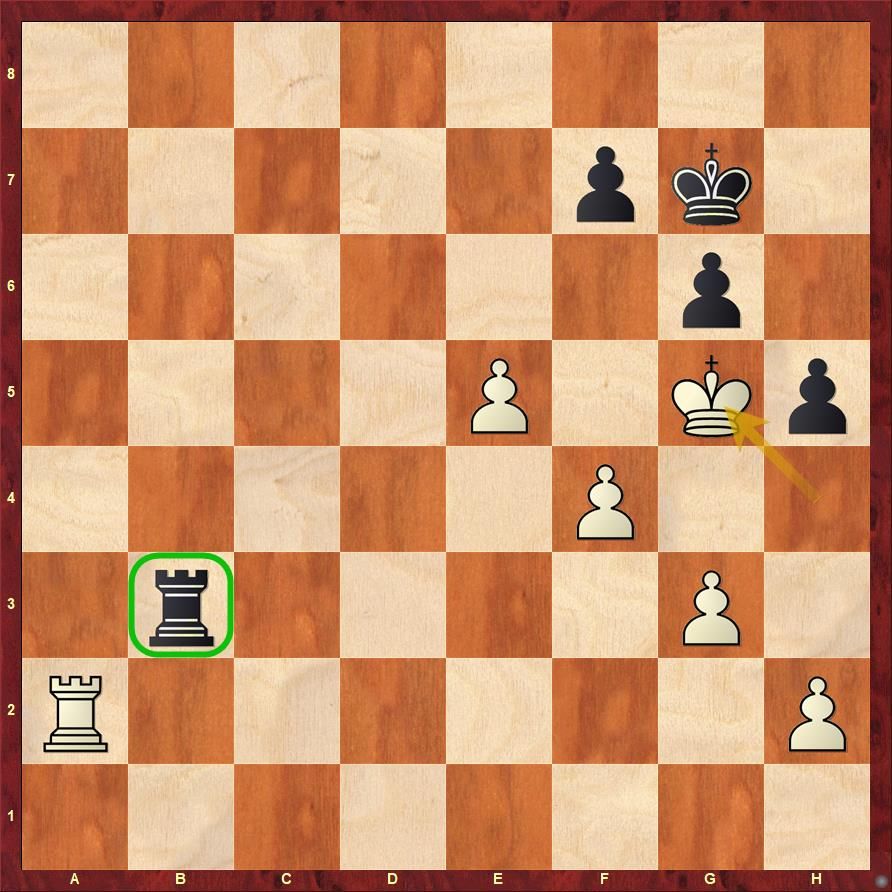 This endgame is a well known draw, but since Kasparov had lost in it against Piket, people have been careful about the same. The point is that you should keep your rook on the b-file so that you can use it laterally to give checks from b5 or stop the e-pawn from advancing by being on b6. If you instead put your rook to e3 here, you would lose the game. Aravindh somehow knew all the intricacies of this position and drew the game with just a few seconds on the clock. Check out this end:

It was time for the second blitz game now and it once again seemed like we were going for another draw, when Adams blundered. 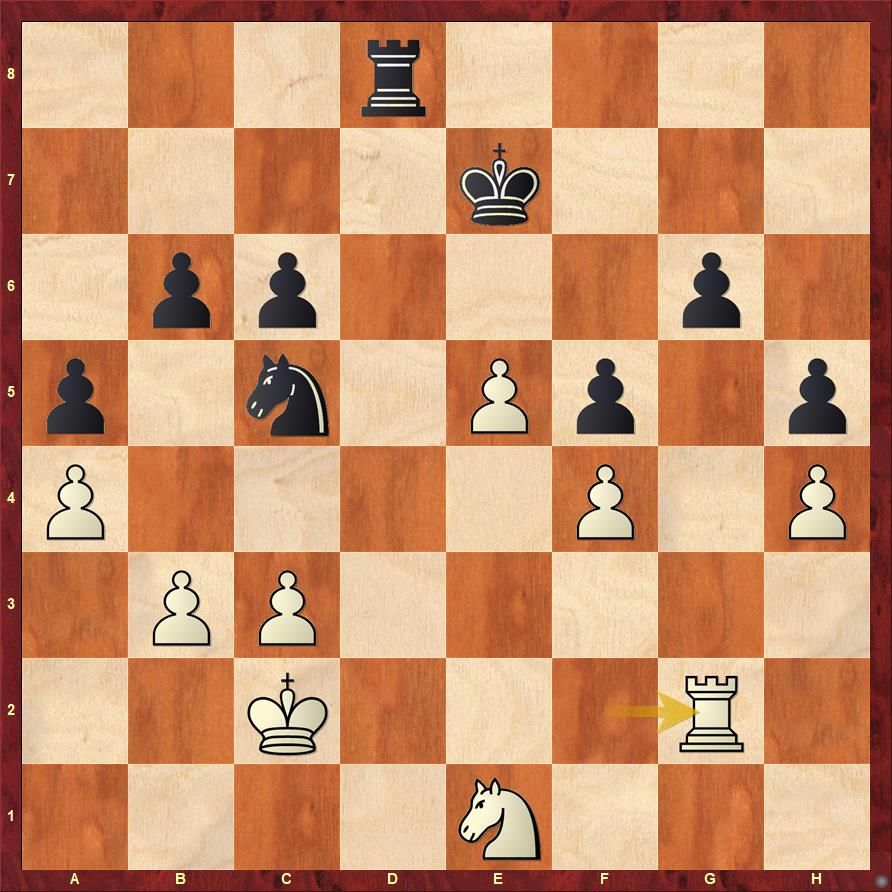 White has just attacked the pawn on g6. Here Black made the first step in the wrong direction by playing Kf7. Rg8 was better. 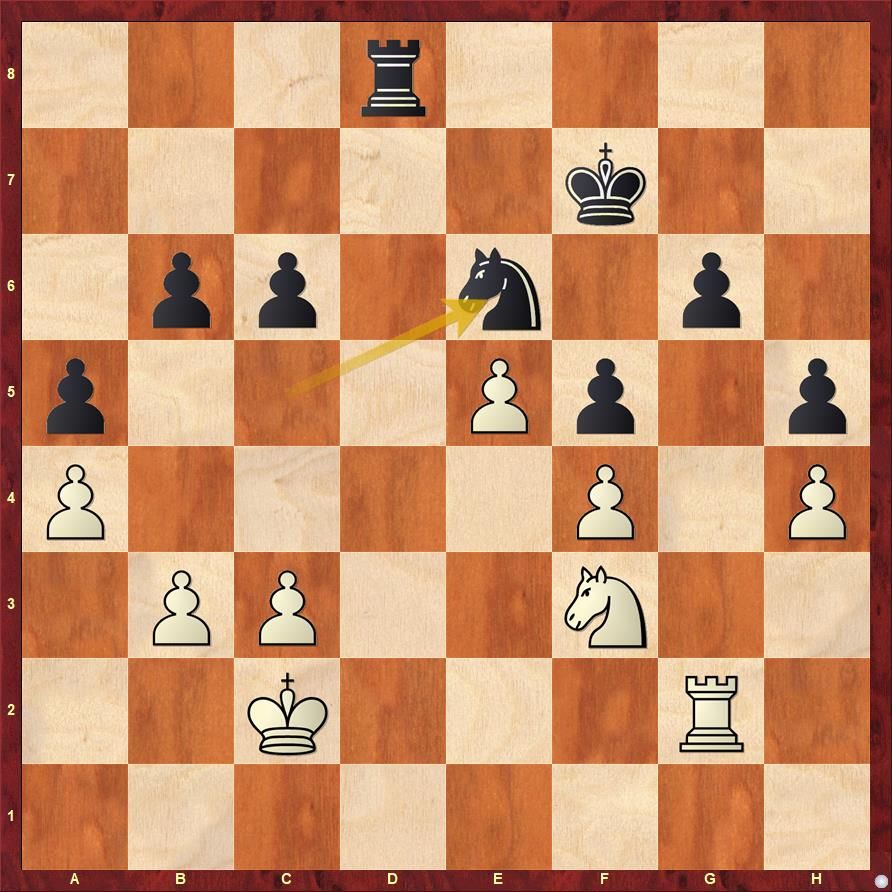 ...Ne6 by Adams was the final nail in the coffin. It was important not to land in a rook pawn endgame. White just gave a check with Ng5 and it was game over! 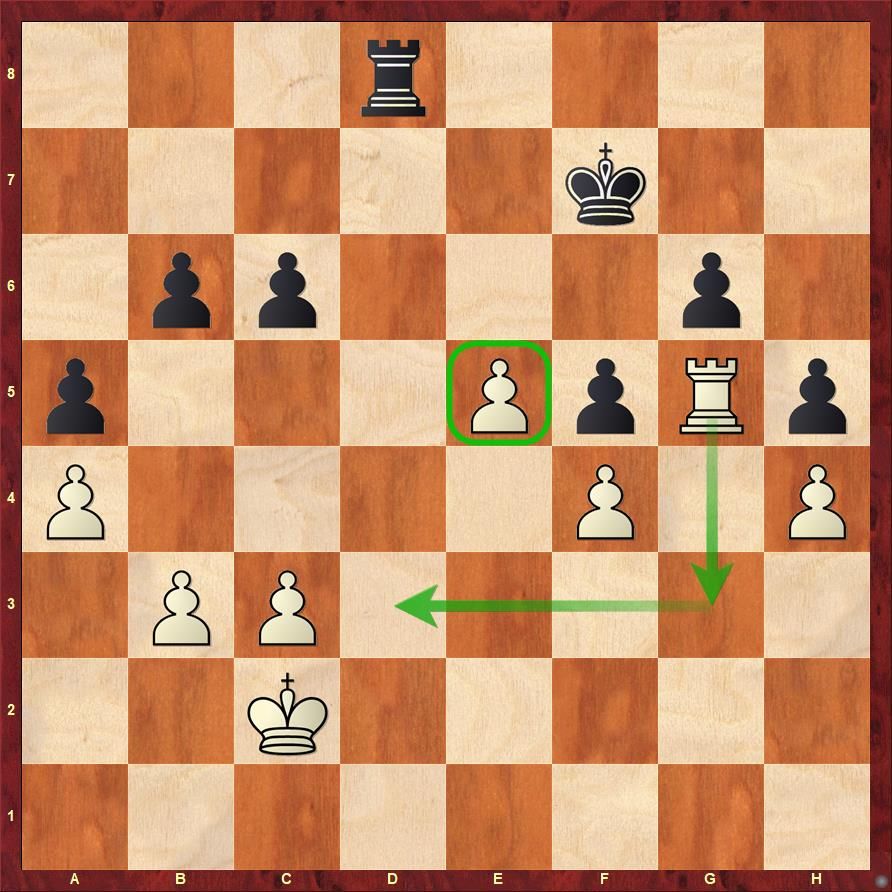 The rook is going to come back from g3 to d3 and the pawn endgame is just lost! 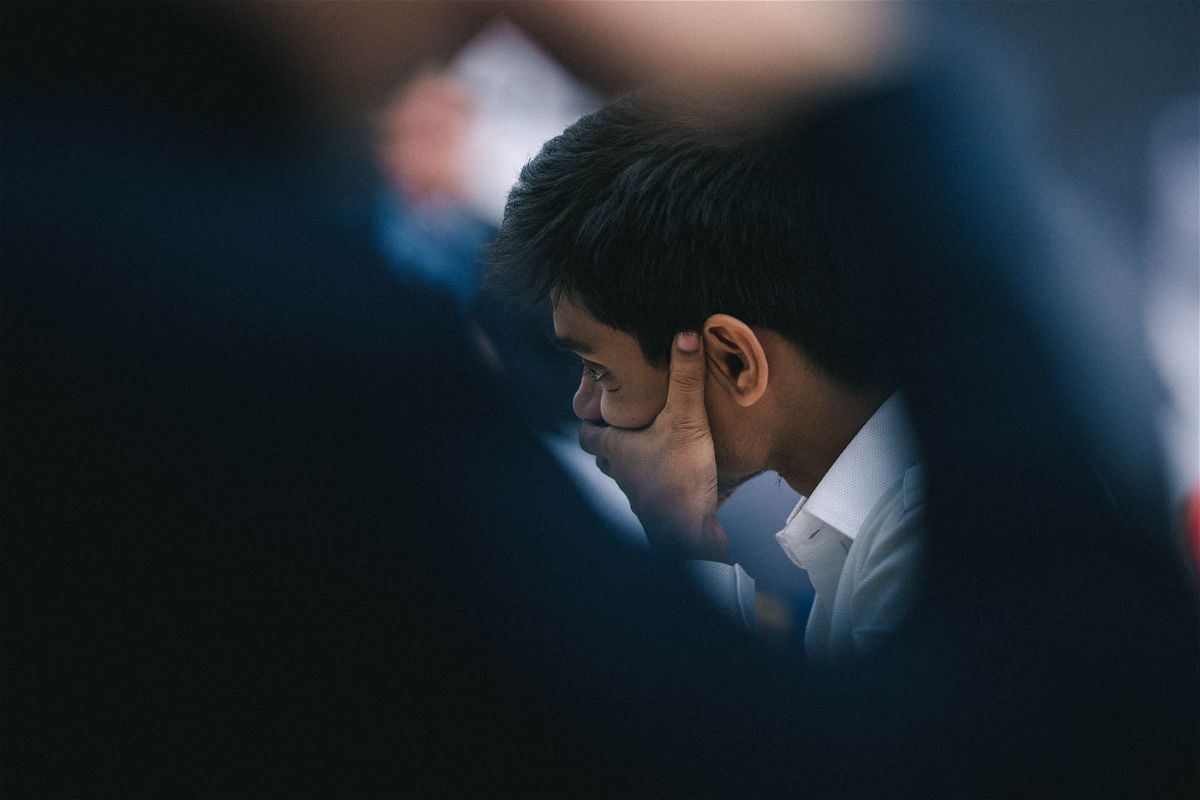 Not many expected that Aravindh could beat a world class player like Adams, but then no one expected him to win Chennai open when he was just 13 or become the national champion in all three formats (classical, rapid and blitz) of the game! The boy simply never ceases to surprise! 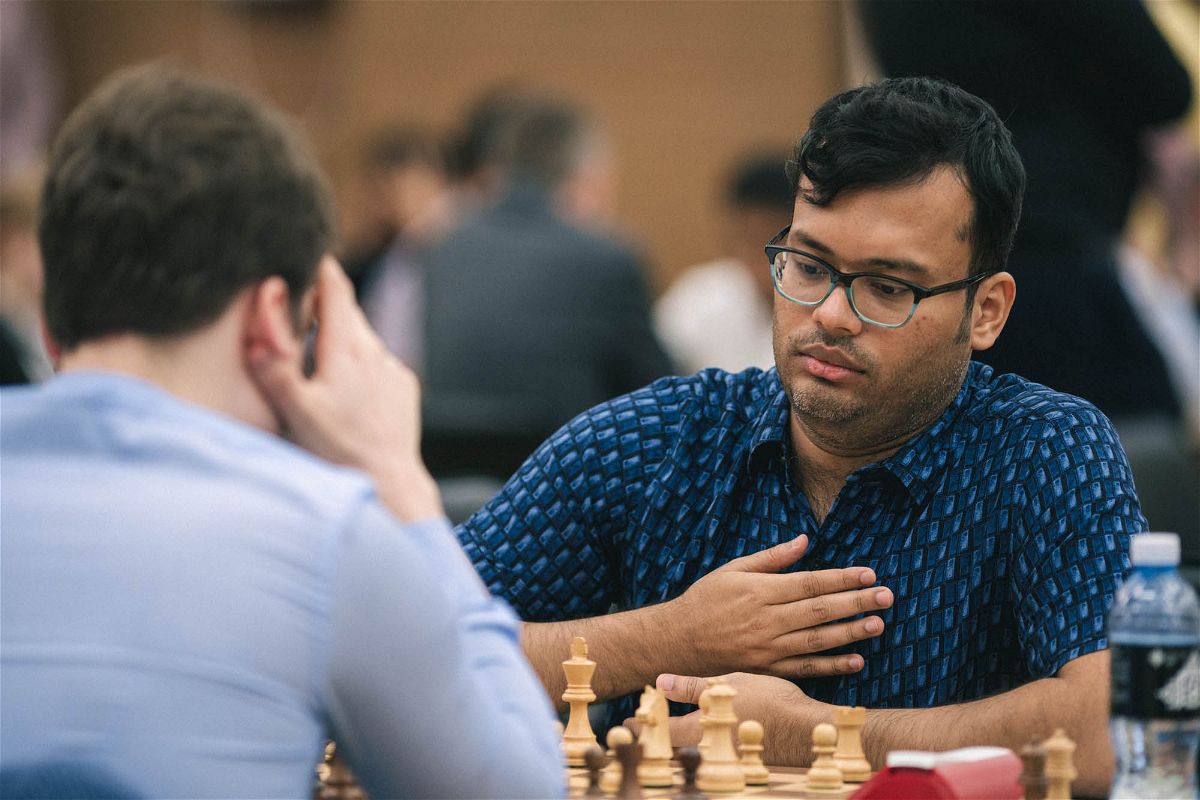 Both the games in the 25+10 section ended in draws. Fedoseev won both 10+10 games and eliminated Ganguly. 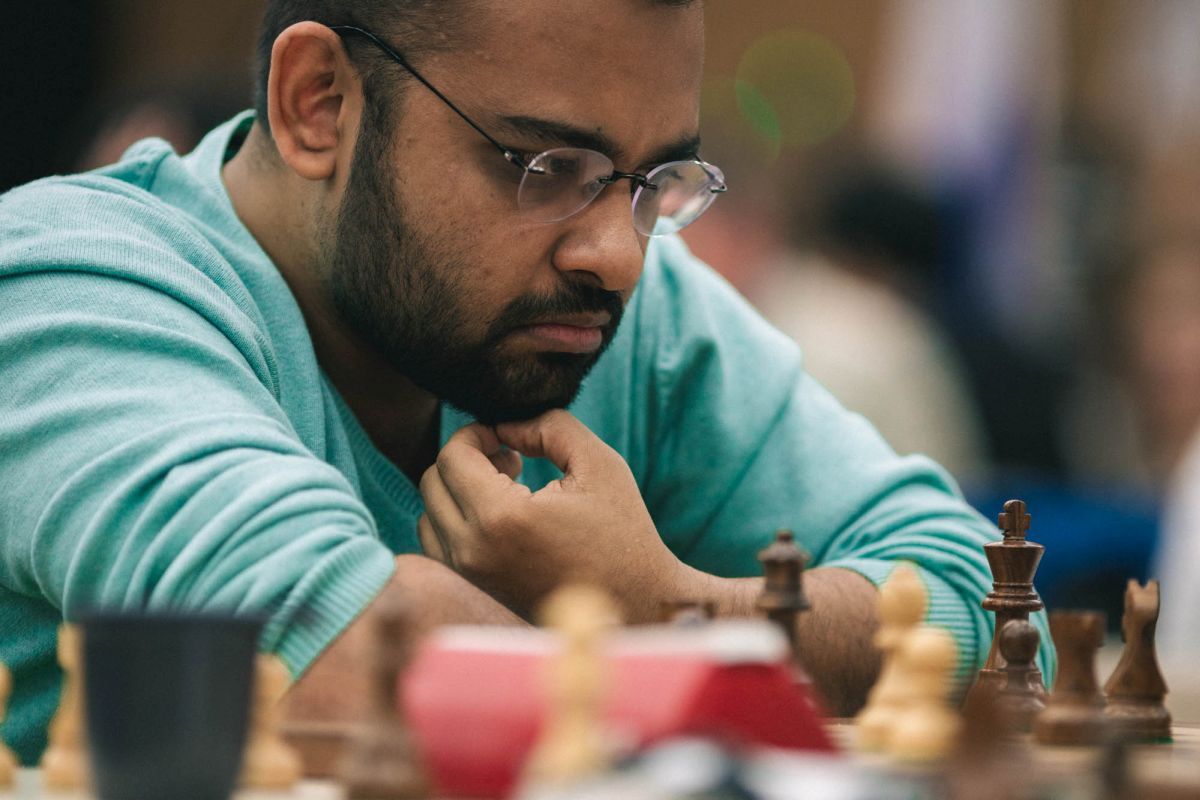 Abhijeet Gupta won the first game of 25+10 and had the draw within his grasp in the second game but his opponent kept posing him problems which made him make a mistake and the match was tied at 2-2. In the 10+10 section first game Gupta had a clear advantage, but misplayed it and slumped to a loss. In the second game too Gupta was better but couldn't really convert. He overpressed and lost. 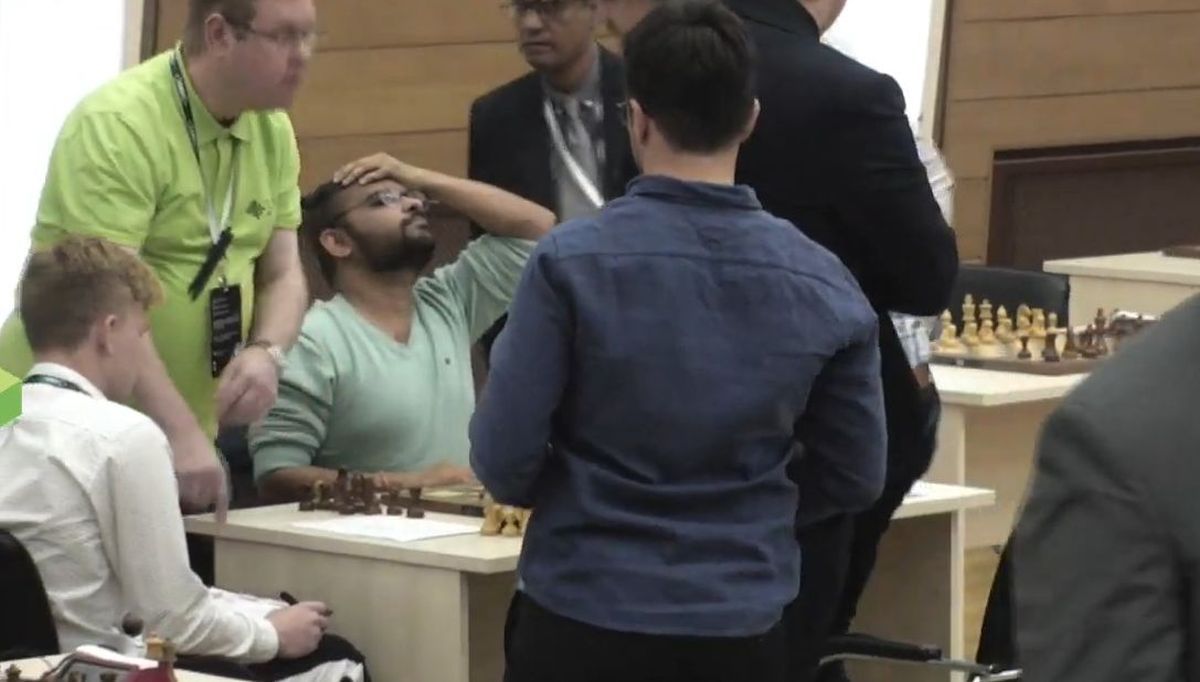 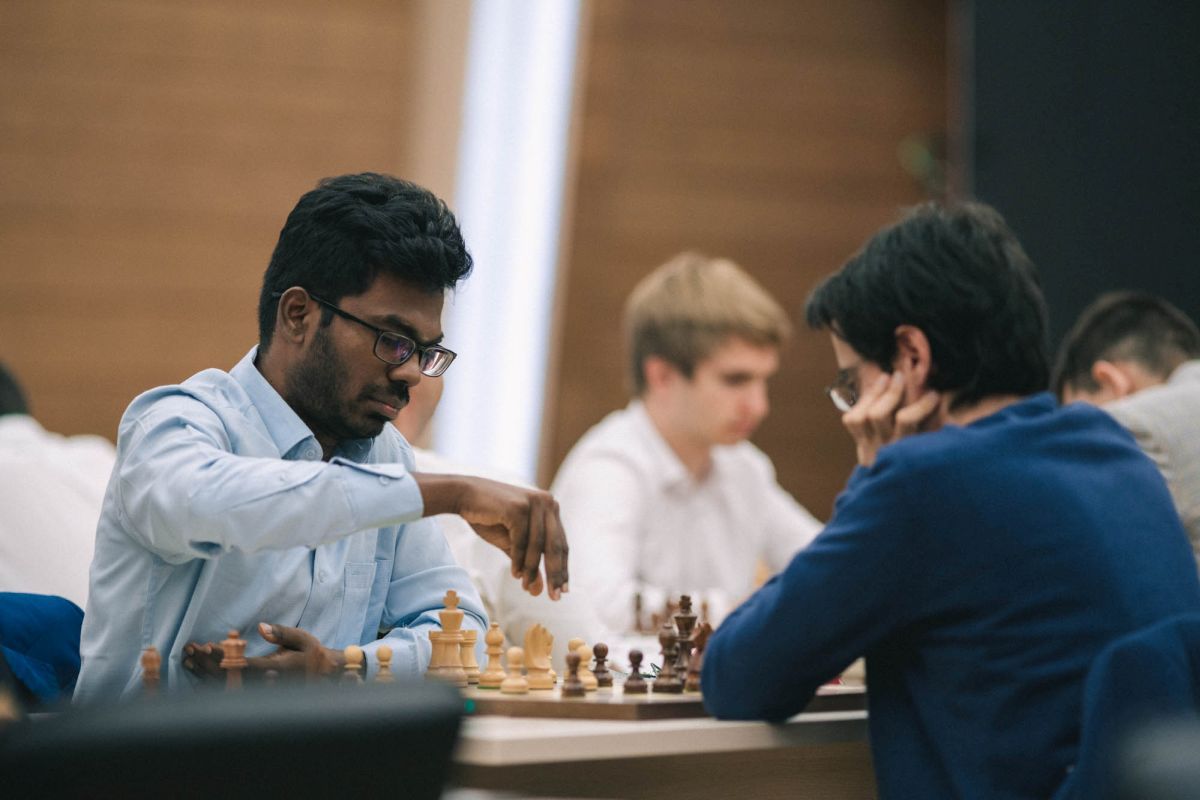 Sethuraman was clearly better in game one but was unable to take advantage of it and slumped to a defeat. In game two he tried hard but Nabaty gave him no chances. When the Indian GM tried to overpress, Nabaty played well to finish off the game. Sethuraman was thus knocked out from the event.

S.L. Narayanan was clearly winning in the first rapid game but was unable to finish off his opponent. It ended in a draw. In game two David Anton played a very good game to take home the full point and advance to round two. S.L. Narayanan's journey at the World Cup 2019, thus comes to an end.