Both GM Vitaliy Bernadskiy (UKR) and GM Karen Grigoryan (ARM) finished at 7.5/9. Bernadskiy clinched the championship due to a better tie-break score and Grigoryan had to settle for the runner-up position. Bernadskiy won a trophy and €2000 cash prize. GM Tigran Harutyunian finished at third place with a score of 7.0/9. CM Rajarishi Karthi missed an IM-norm by a whisker, he gained 62 Elo rating points. CM Shahil Dey was the highest gainer among Indians by 122 points, WFM Savitha Shri B is the second highest gainer with 102 points. Total 297 players participated from 30 countries across the world. Photo: Club Ajedrez Roquetas

Bernadskiy and Grigoryan finish at 7.5/9

Fourth seeded GM Vitaliy Bernadskiy (2588) of Ukraine and top seed GM Karen H Grigoryan (2632) of Armenia both finished at a score of 7.5/9. However due to a better tie-break score, Bernadskiy clinched the championship and Grigoryan had to settle for the second place. Third position also went to another Armenian, GM Tigram K Harutyunian who finished at 7.0/9, bettering two other players who also finished at 7.0/9 according to the tie-break score. 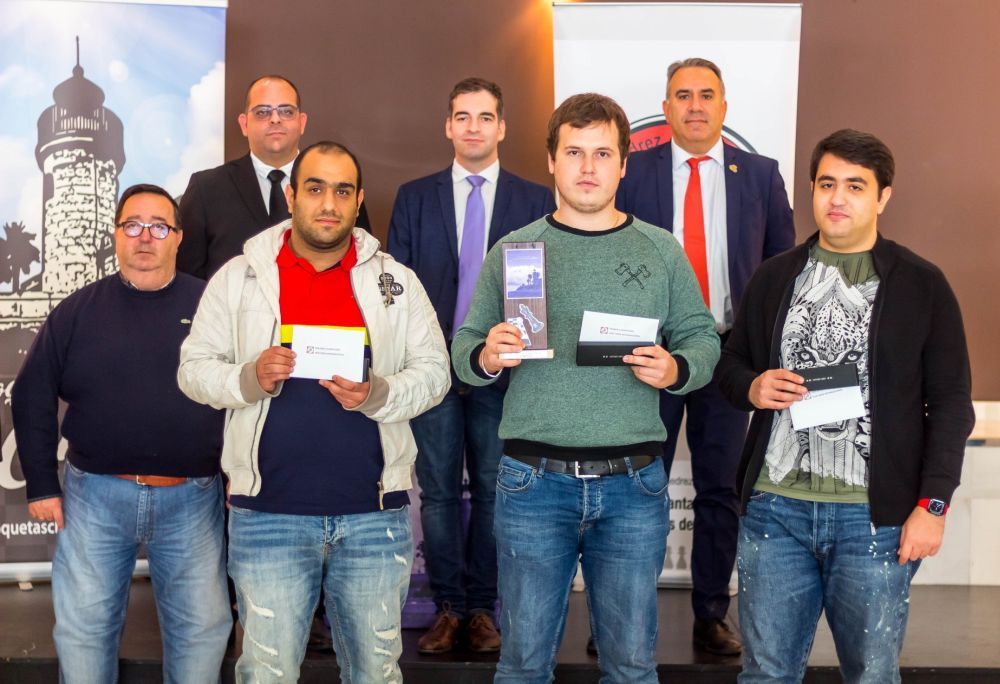 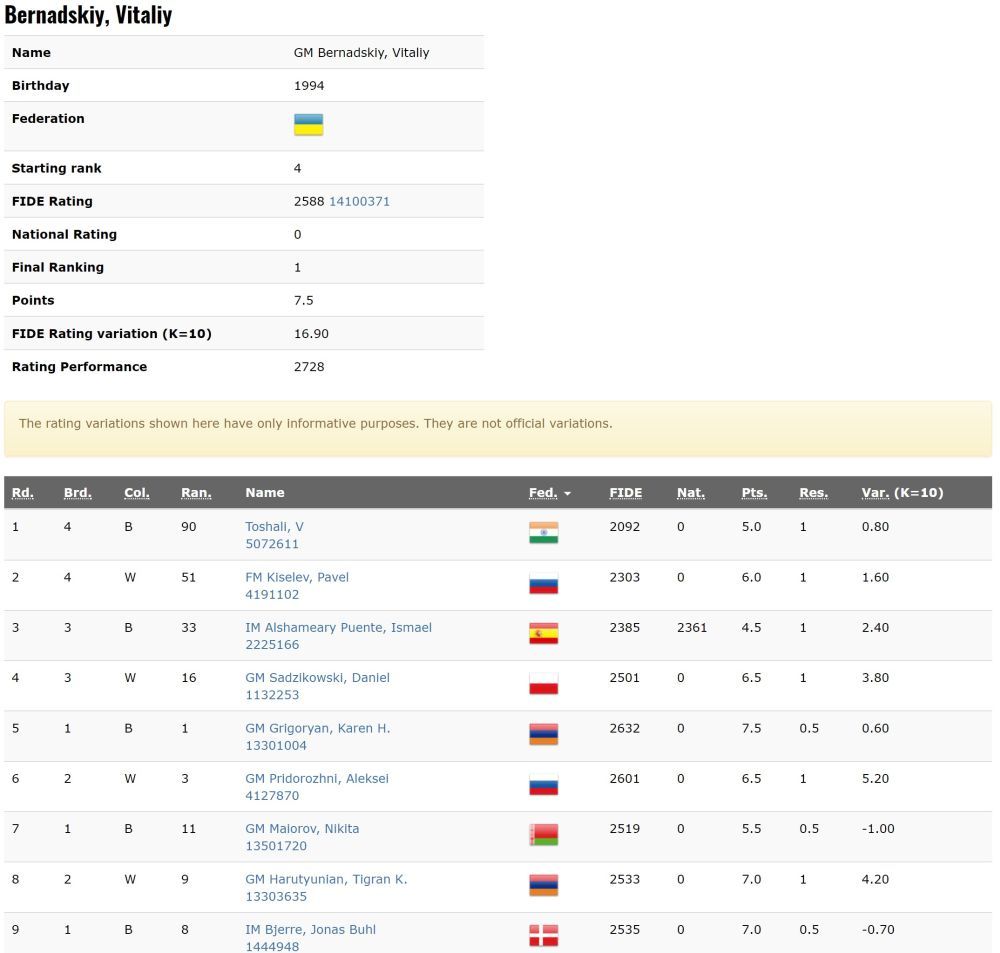 Bernadskiy received a trophy and €2000 cash prize for his efforts. His best win was in the sixth round against third seed GM Alexei Pridorozhni (2601) of Russia.

The XXXI edition of the International Chess Open “Villa de Roquetas de Mar”, which is enjoyed as a festival of this sport, due to the development during these days of other relevant competitions apart from this Open, will be remembered as one of the most evenly matched and with the highest level editions. The Ukrainian Bernadskiy achieved the victory with a solid play which made him the most regular player of the tournament. 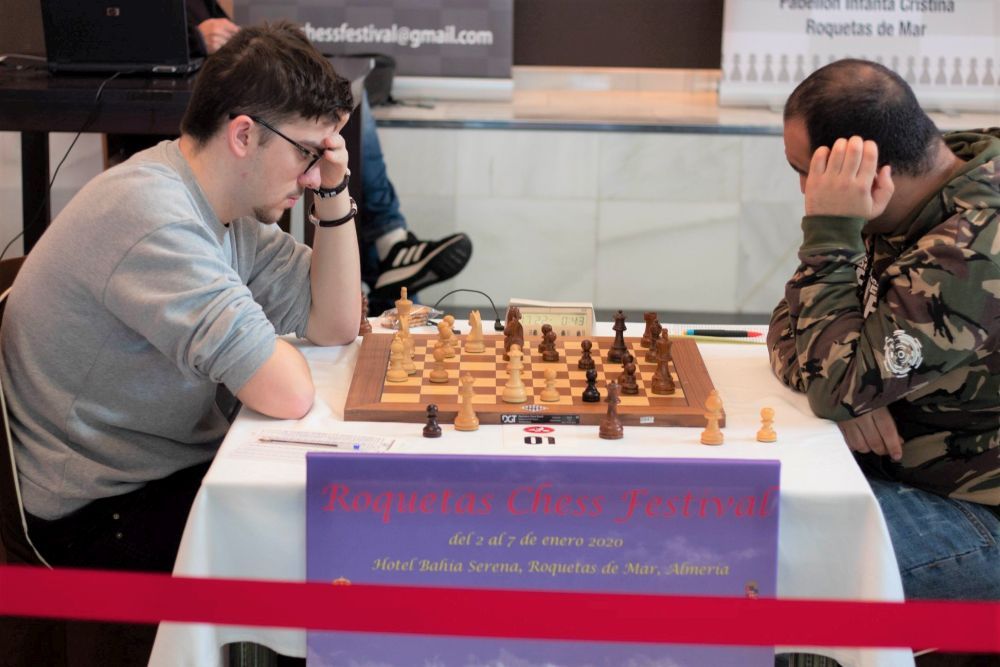 Karen Grigoryan (right) in action at the top board | Photo: Club Ajedrez Roquetas

Simultaneously to this outstanding tournament, as part of the Roquetas Chess Festival, the VII Edition of the Open Under 2150 was played, involving players whose ELO does not reach that figure.This time, the tournament favourite prevailed, and the young Sevillian player Juan Chacón Pérez obtained a clear victory thanks to his resolute play, ending ahead of the also Spanish players Vázquez and Zurita and completing a high standard podium.

The other tournaments celebrated during the XXXI Roquetas Chess Festival included the Andalusian Cup Under 12, played as a team competition and won by CA Puerta Elvira from Granada, with a great third position achieved by Club Ajedrez Roquetas; and the Overnight Blitz Tournament , played with “lightning speed” , where the Venezuelan player José Rafael Gascón achieved the victory. The Roquetas Chess Festival was held at Hotel Bahía Serena and from the 2nd to the 7th of January it gathered almost 300 players with a wide international representation, coming from 29 different countries. 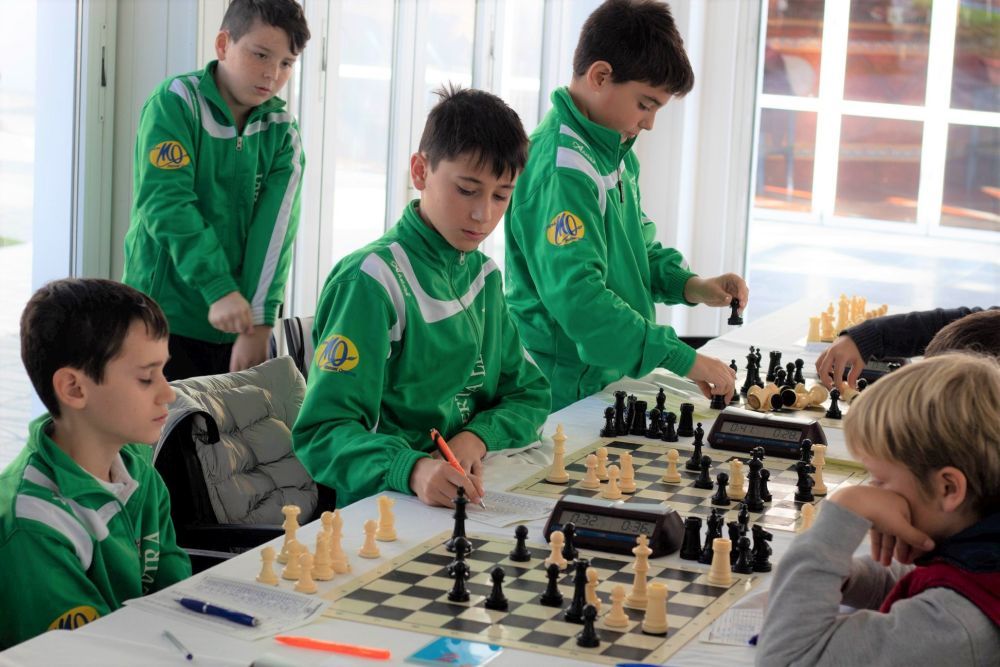 Kids participating as a team in the Andalusian Cup Under-12 | Photo: Club Ajedrez Roquetas

Without a doubt, the delegation with more participants, apart from the Spanish, was the one coming from India. A prestigious group of players, who showed the amazing level of the players of this country, although occasionally it is not reflected on their international ELO which remains far below the level shown during this tournament. The best performance came from Rajarishi Karthi, who having 2103 ELO , almost achieved an International Master Norm and competed on equal footing against the best players. 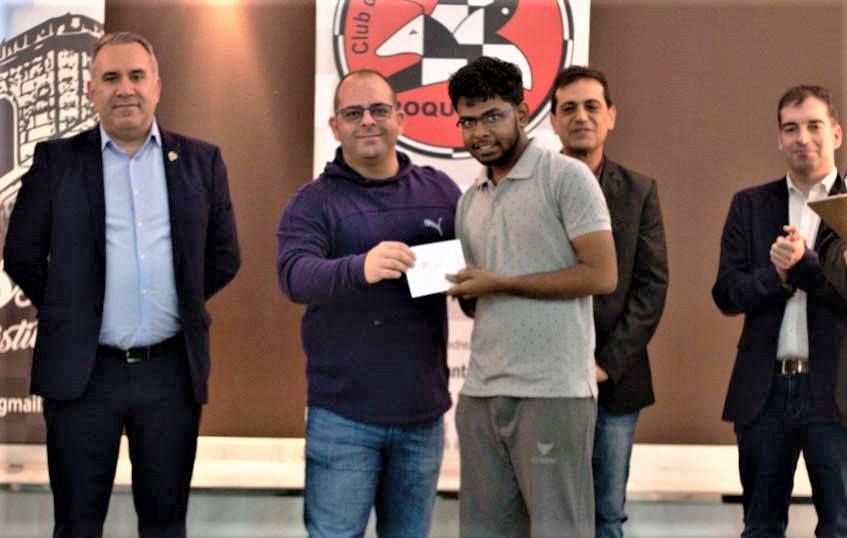 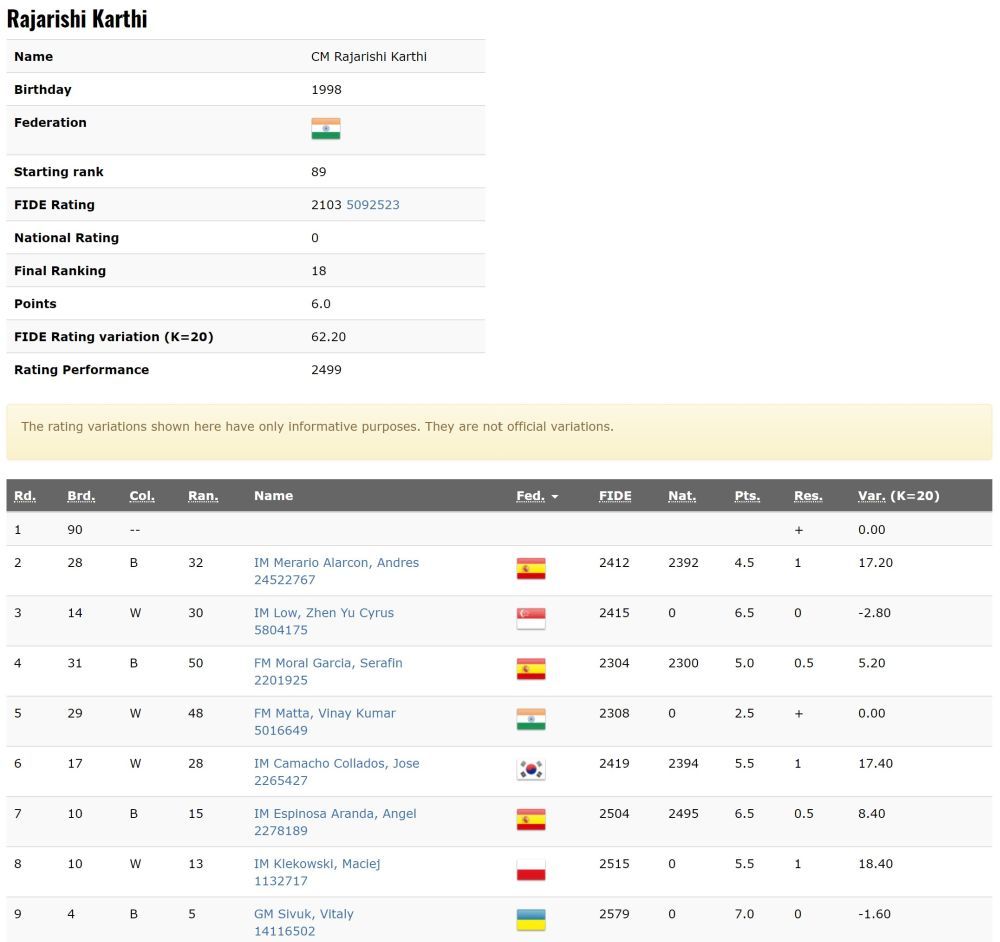 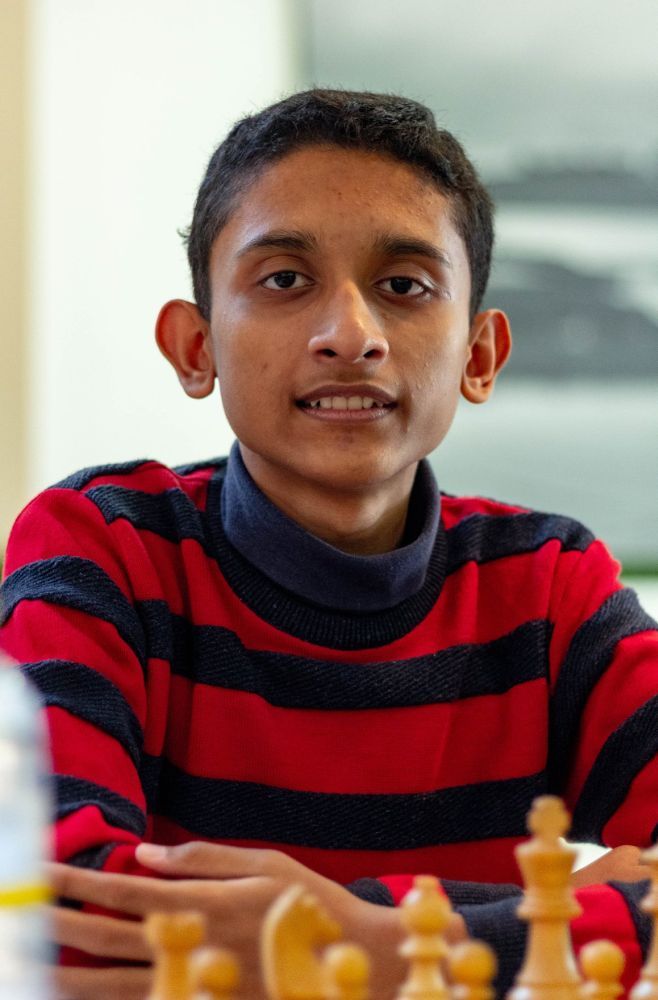 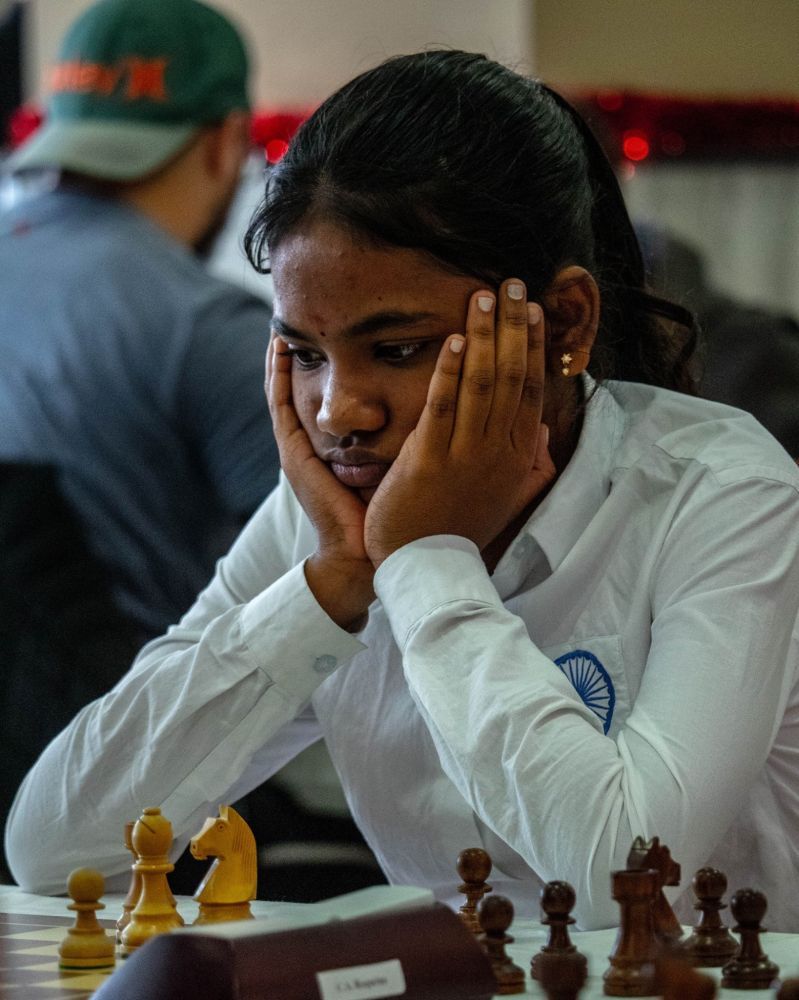 A ceremony closed the XXXI Roquetas Chess Festival where trophies and IM-Norms were given to the winners. Javier Garrido, as president of Club Ajedrez Roquetas and director of this festival, regarded the event as a resounding success and thanked, "to every person and institution which makes this festival possible and especially to the players". Additionally, Garrido also thanked the support of the Roquetas de Mar City Council stating that "the organisation of this Open would be impossible without them". Garrido took advantage of his speech to dedicate friendly words to José Manuel Martínez Magán, his predecessor as director of the Open, present this time among the onlookers. To conclude Garrido invited all the participants to come back for the 2021 edition.