As in other spheres of business and economy, Chess in India too is growing at an unbelievable pace, thanks to the support coming in from corporates around the world, who have recognized the importance of associating with one of the greatest games on the planet. It's turning out to be a win-win situation for all concerned - for corporates, it enhances their brand value and fulfills their CSR role. For chess players it offers an opportunity to participate in a world class event and claim huge prizes. One such event is the Tetrasoft Open at Hyderabad, which has just put forward its 2nd step but is all set to take a quantum leap forward by generating tremendous enthusiasm among the chess fraternity of India. This year the event was conducted at the 5-star hotel, Marriott - a first of its kind in the country from 19th September 2018 till 23rd September 2018. FI Praful Zaveri send us a detailed report of the event.

The colourful banner of the event. | Photo: Praful Zaveri

Tetrasoft is a US based IT giant, which has been incorporated in 1997 and is head quartered in St. louis, US. It has 6 offices worldwide and currently employs more than 1000 people globally. It delivers leading, cutting edge technology and consulting solutions to its clients primarily in healthcare, banking, Finance and supply chain management industries. Tetrasoft strongly believes in their people, their potential and encourages them to forge their own career paths. Echoing the company's policy: Rama S. Eyunni, CEO of Tetrasoft stated that "... as chess is an intellectual game with various health benefits, we deem it to be an ideal sport to be promoted. It's also taken up by many as their career hence in terms of skill development it is very beneficial."

India's oldest player, 84 years old T.V. Subramanian and youngest player, 4 years old Samhita Pungavanama were among the participants. The total prize money of the tournament was 5 lakh rupees and as many as 4 Grandmasters, 6 International Masters and 6 FM/WFM took part in it. Altogether 274 players from 15 different states across India and special affiliated units of AICF in LIC, Railways, ICS to name a few participated.

At the end of the 6th round it was Muthaiah Al of Tamil Nadu who was leading the tournament with a perfect score of 6.0/6 points followed by GM Deepan Chakkravarthy J., GM Laxman R.R., IM Saravana Krishnan P. and IM Kathmale Sameer all sharing the second spot with 5.5/6 points. Below is the 6th round game of Muthaiah Al against FM Audi Ameya of Goa: 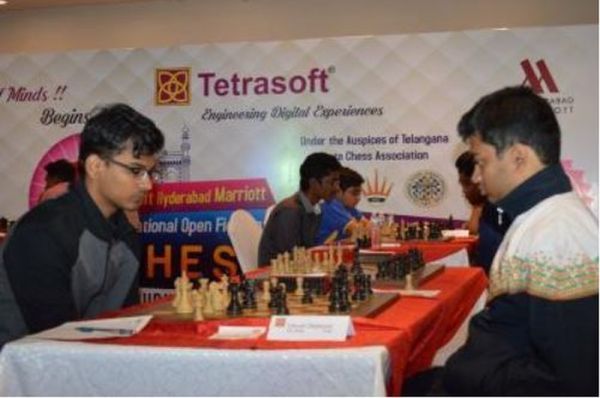 GM Diptayan Ghosh(right) was the top seed of the event and he scored 7.0/9 points to finish seventh | Photo: Cityairnews

One of the biggest upset of the event came in the 3rd round when Pimpalkhare Vedant rated 1962 of Maharashtra stunned the 5th seed GM Sriram Jha. 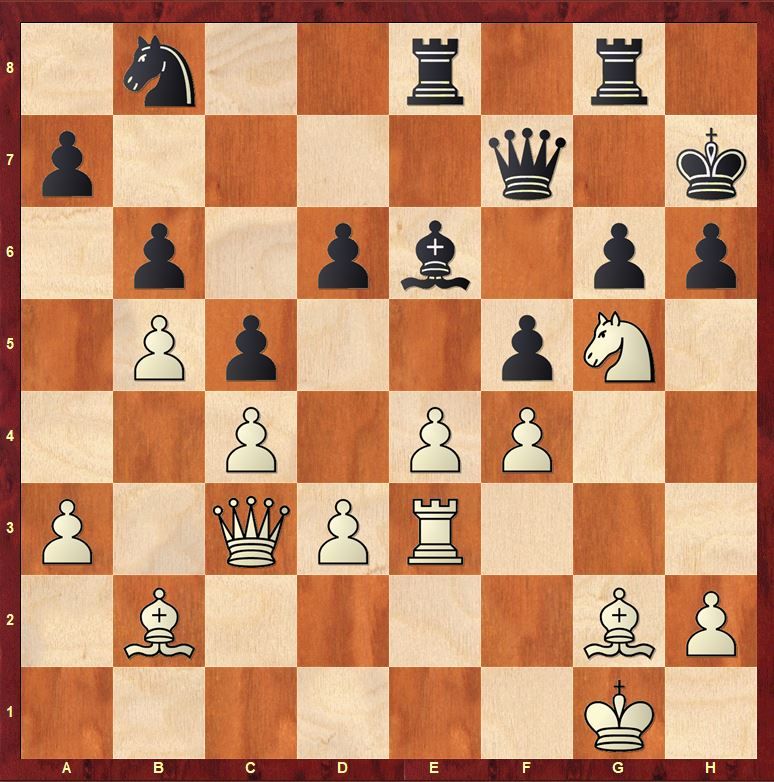 Ng5! was a killer! How many below 2000 rated players can boost of such a finish against a GM?

The event turned out to be quite good for Pimpalkhare as he ended up scoring 6.0/9 points and also pumped up his rating by a few points. Below is his beautiful win over GM Sriram Jha:

In the 7th round GM Deepan Chakkravarthy J. started his game with 1.g3 against IM Sameer Kathmale and went on to bring home the full point and join the leaders at the end of the round. Below is the game:

The top two boards ended up in draws in the penultimate round but on the 3rd board IM Saravana Krishnan P. squeezed out a win playing the French defense against IM Rathnakaran K. which allowed him to catch the leaders going into the last round. Below is the crucial victory of IM Saravana against IM K. Rathnakaran:

A still from the last round of the event. | Photo: Praful Zaveri

Below are both the games of the top two boards from the last round: 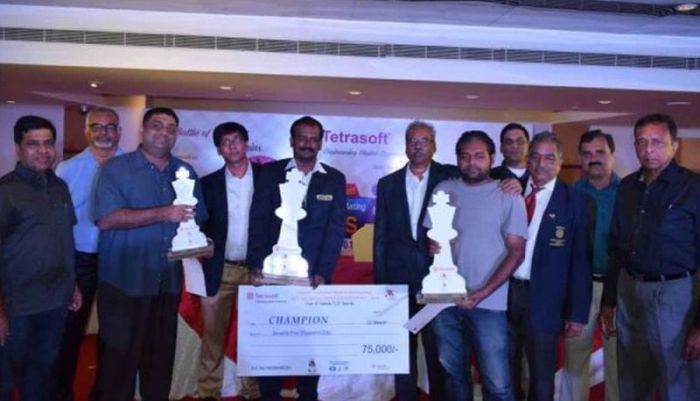 The event was jointly organised by Tetrasoft Hyderabad and South Mumbai Chess Academy (SMCA) lead by its energetic directors duo in FM G.Balaji and Nagesh Guttula. IA Anandh Babu VL was the Chief Arbiter and he was assisted by FA Venkata Kumar G, FA Bhaskar V and FA Sandesh Nagarnaik.\

The tournament was successfully conducted by Srikanth Malladi, the Chief Organizer who had put tremendous efforts to ensure its success. Giving his vision for future, he said "We are looking forward to conduct many more great events with the support of Tetrasoft and Marriott such as GM Open tournament where foreign Grandmasters could be invited and 3rd edition of the much-loved tournament conducted here". Echoing his sentiments, Nagesh Guttula said "India needs more events like Tetrasoft Marriott to develop the game further as with support, sponsorship and active participation of corporates we can be the No.1 in the world. As India has the most talented chess players we just need the right tournaments and quality coaching to groom them into world champions", I appreciate the efforts being taken by Shrikanth malladi in organising this event at a grand scale". So, do not be surprised if you find Tetrasoft as a norm-event in the next edition!

Last year at the Mayors Cup, IM Saravana Krishnan scored his 2nd IM norm after a gap of 8 years. ChessBase India caught up with him for an interview where he shares his set backs and how he overcame them. 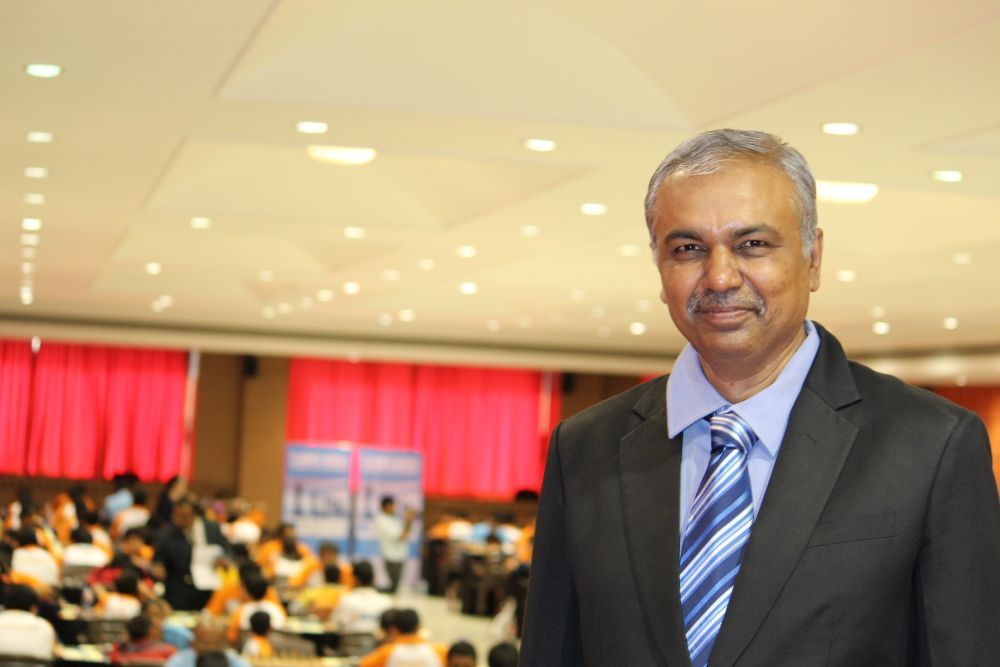 FI Praful Zaveri is the founder of Indian Chess School Academy. He is a popular trainer in Mumbai and also the author of the critically acclaimed Chess Course book for beginners. His vision is to build the chess culture in his hometown Mumbai as well as India and help the country produce many more grandmasters in future. For this he has been the organizer of some huge projects like the IIFLW tournament, regular high class events and training sessions.