Nihal on the cover of the ChessBase Magazine 178

The ChessBase Magazine has established itself as one of the best resources for chess training and information. It is published every two months and has analysis by top grandmasters, videos by the likes of Daniel King and Simon Williams, and in general a lot of training material. Usually on the cover you have a picture of either Magnus Carlsen, Wesley So, Hikaru Nakamura. When one says that an Indian is on the cover of the magazine you might imagine that it is Vishy Anand or Pentala Harikrishna! No! It's a 12-year-old prodigy and his name is Nihal Sarin!

The World Junior Championship 2014 in Pune was our (Amruta and mine) first full-fledged assignment as chess journalists. Amruta would spend hours taking pictures and I would come back to the room and weave those images into an article. All the while we would be looking around, staying alert for a new story coming our way that would make the report more interesting. We got a participant to play the piano, made so many people share their stories with the world and in general Amruta was able to capture some brilliant moments. But I think the find of the tournament was definitely the 10-year-old boy from Kerala Nihal Sarin.

The boy who would never sit! 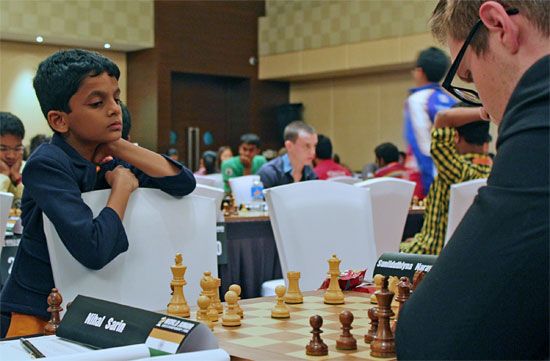 Nihal was just so full of energy, that he would never really sit down on the board. In fact I managed to capture this in a video...
...just have a look at the crowd that had gathered around the board 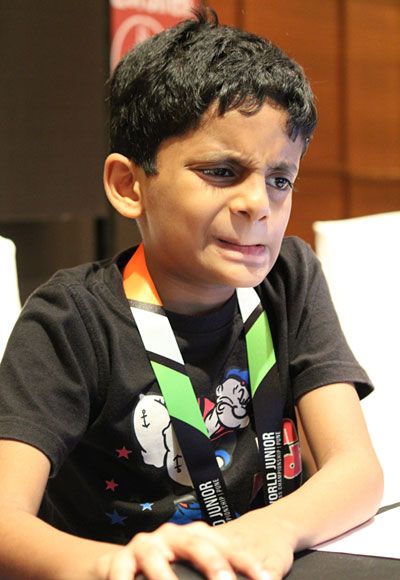 As a part of the commentary team, I invited Nihal to the commentator's room to analyze his game against the Hungarian Balazs Csonka.
Experienced WGM Swati Ghate sat next to Nihal to ask him questions about the game. What we saw next simply stunned us. The clarity of the words he chose, the precise variations that he would show, the accurate evaluations at the end of the line. Was this really a ten-year-old boy? Unfortunately, that video has been deleted from Livestream. I have been pestering Vijay Kumar for years now for that video of Nihal explaining his game. I hope he is able to find it. Until then you will have to do with this one minute interview that I conducted with him after one of his encounters:
Nihal hates vague questions being hurled at him and he thinks deeply about whatever he is going to speak. That's why I found it very apt when he replied to my question - are you very strong in the endgame with "Impossible to say!"

Over the last two and a half years Nihal has shaped up into a very strong player. The efforts of his father Dr. Sarin A., and mother Dr. Shijin, coaches Nirmal E.P and Dmitri Komarov have been rewarded by Nihal becoming an IM at the age of 12 years and 8 months. It comes to me as no surprise that this happened. The boy had such clarity in his thinking that it was impossible not to have a bright forecast for his future.

When I got to know Nihal was in the ChessBase studio a few months ago, I got really excited. The reason: Nihal would record something for the world and people would finally be able to see him showing variations and analysis. Team ChessBase was wise enough to do that, and they went the extra mile.... 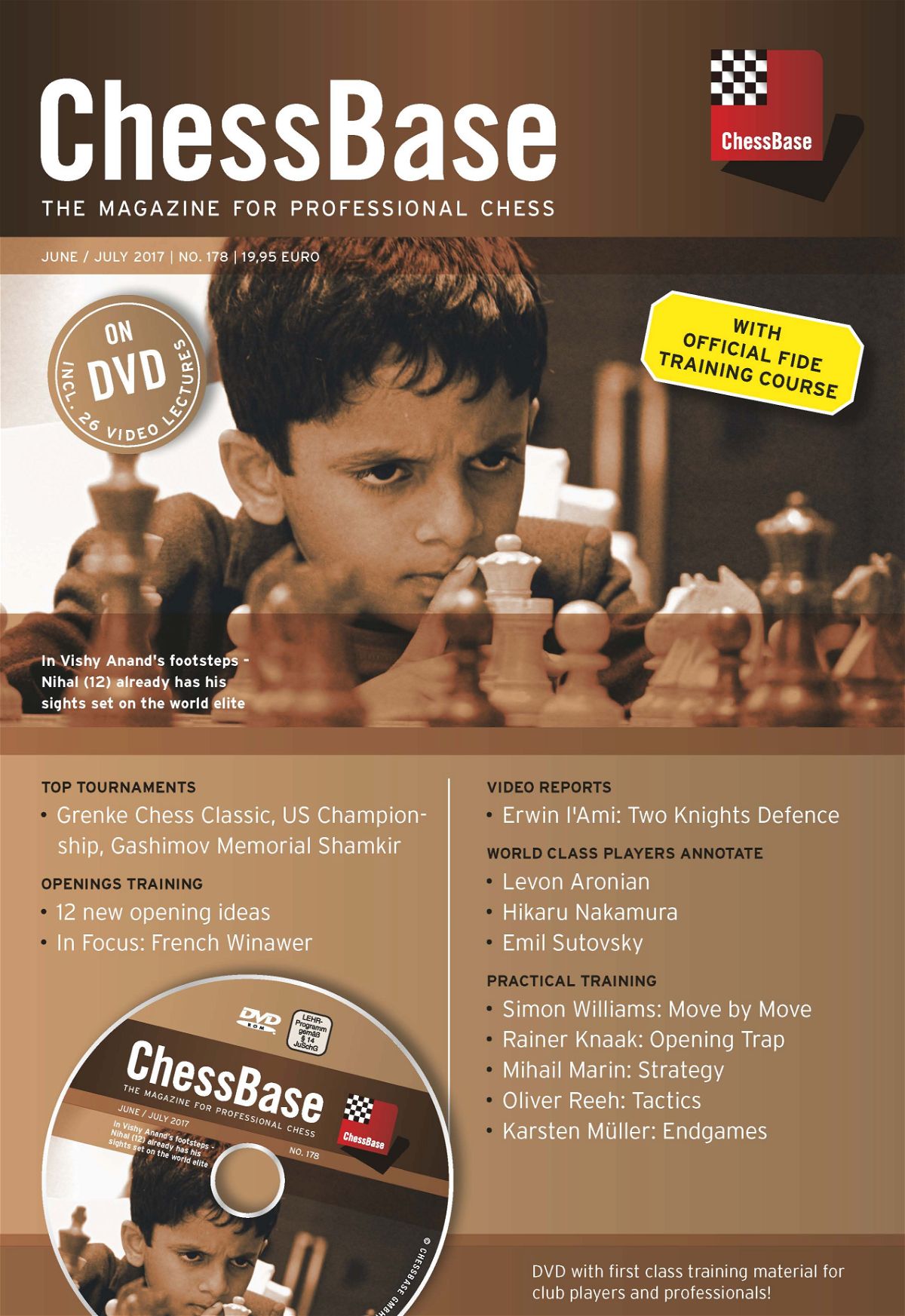 The boy was featured on the cover page of the ChessBase Magazine (CBM) 178!
And guess who has taken the above picture? Of course it's the famous Nihal stare captured by Amruta at the World Juniors 2014! As someone rightly put it, "Nihal's stare is akin to Kasparov's in his prime!" 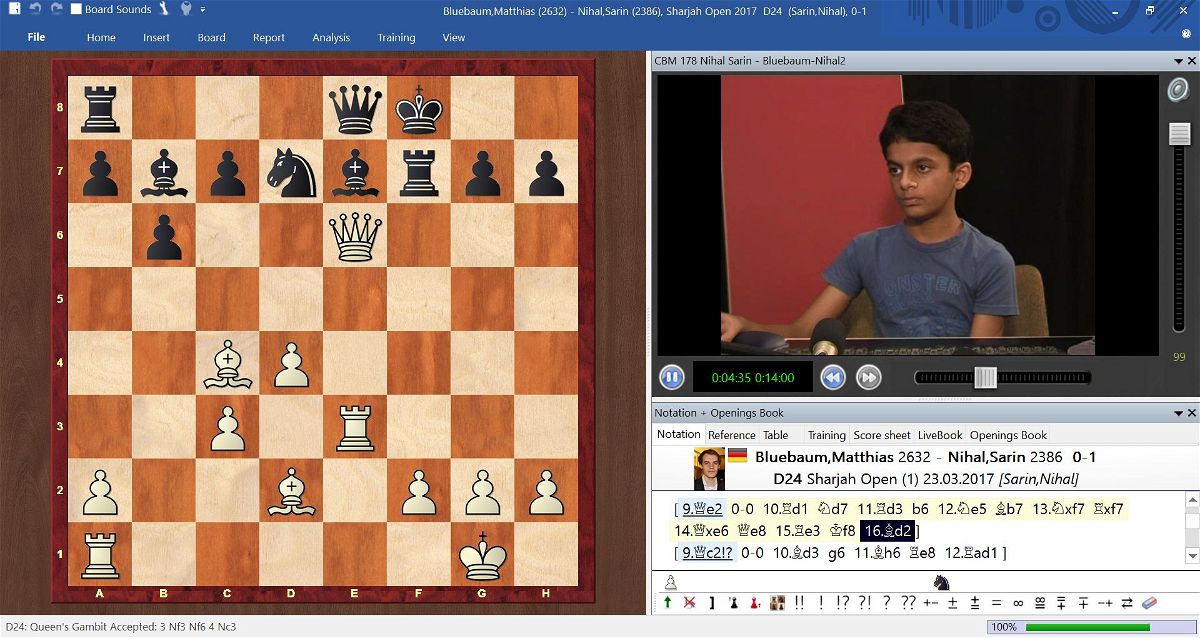 Nihal shows his win over Matthias Bluebaum (2632) with the black pieces at the Sharjah Masters 2017
The boy is now nearly 13 years old. He is more matured. He speaks calmly but the clarity of variations and ideas is still very much intact. What I found really amazing in those 15 minutes of Nihal explaining his game over Bluebaum is the amount of information that this boy could easily remember and reproduce.
I have been in that same studio in Hamburg and recorded many videos for ChessBase. The usual procedure for me is to take my analyzed game in a USB stick, open it in the computer in the studio and then play over the moves while explaining it in the lecture. The reason for me doing this is quite straight forward - speaking to the camera is already quite a difficult task. On top of that I do not want the added stress of remembering my variations. By already having the game fully annotated I am able to focus on the explanations.
But Nihal simply sat in the studio with the bare moves of his game. He remembered all the critical lines, (and mind you there are many) and explained them with great accuracy. This just shows what a phenomenal memory the boy has. For mortals like us I would have liked him to stay with the position for a few seconds after the variation ended, but the boy's mind works so fast that he is already onto the next lines of the game! I think watching this video will give you a better understanding of how a boy from Kerala could become an International Master at the same age as Magnus Carlsen!
Macro alias: EmbedProduct

A small tour of the ChessBase Office 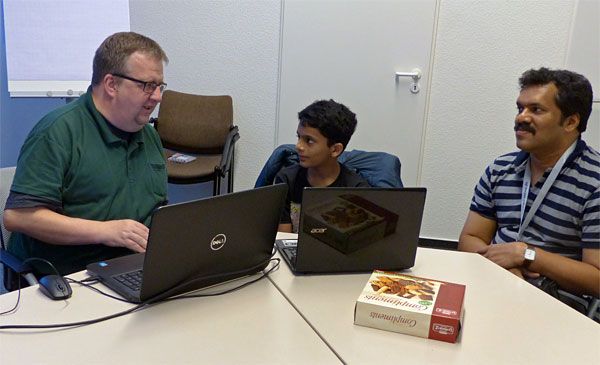 Nihal and his father with Martin Fischer. Martin is the Playchess expert and has ChessBase workshops and seminars held all over the world. 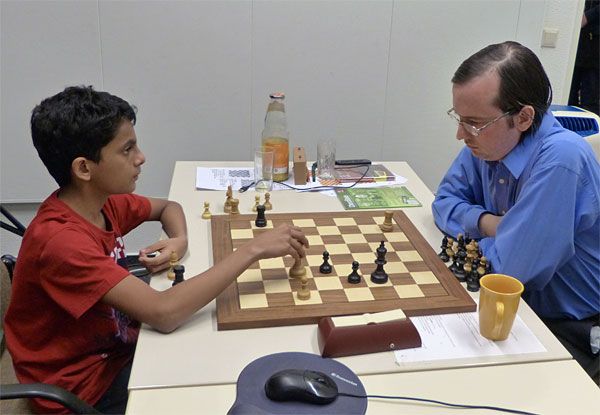 Famous endgame author and trainer Karsten Mueller lives in Hamburg. He often comes to the ChessBase studio to record a video or to meet talented prodigies like Nihal! 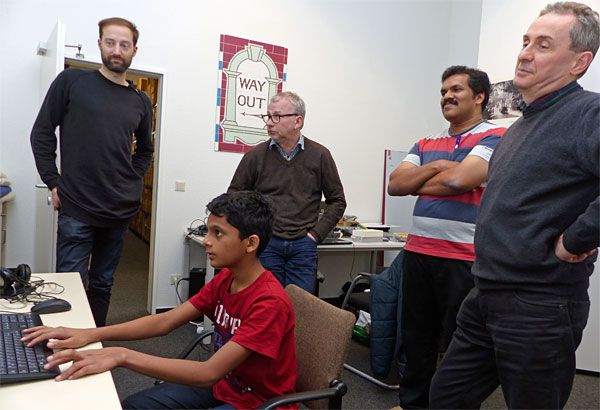 Nihal has everyone's undivided attention. On the left is Pascal Simon - the young man is one of the most hard working people I have ever met. He edits videos, co-ordinates live commentary, video recordings and much more. Perhaps he receives more than 200 emails each day! Next to him is Andre Schulz, the editor-in-chief of German newspage. Andre has a great sense of humour and it is always nice to be in his company. On the right is GM Rainer Knaak. Knaak was a super strong grandmaster in the 70s and 80s having crossed swords against the likes of Karpov, Korchnoi, Taimanov, Timman and many strong players. He is the person who ensures that ChessBase Magazine remains a high quality resource. 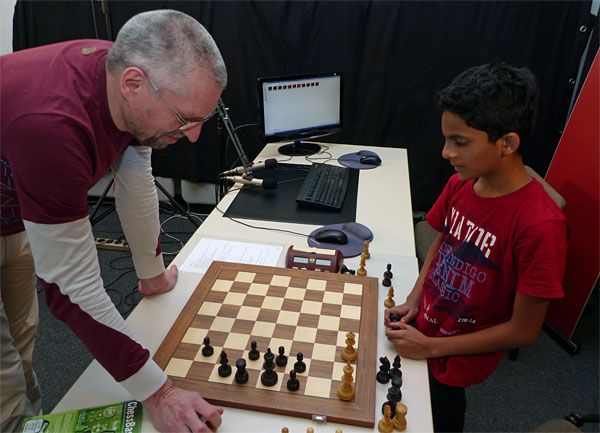 That's programmer Mathias Feist. He along with Matthias Wullenweber are the reason for the ChessBase program being so amazing! Mathias was the person executing the moves for Fritz, when the program beat Vladimir Kramnik in Bahrain, 2006! Yes, he was the one who executed the Qg7#! 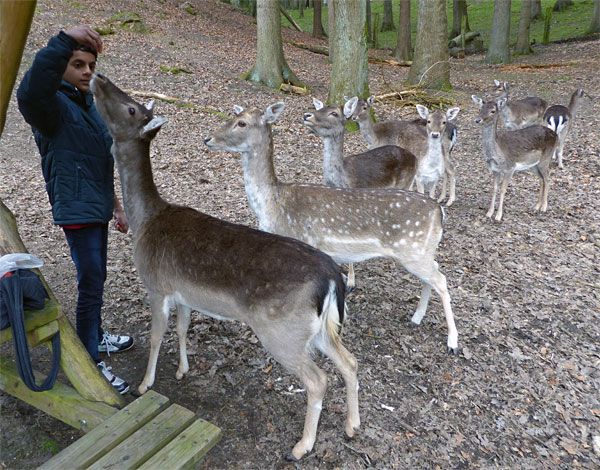 That's the famous Wildpark Schwarze Berge in Hamburg. For a person who visits the deer enclosure for the first time, it can be quite scary! Especially when you have some food in your hand! I think Nihal is holding up quite well! 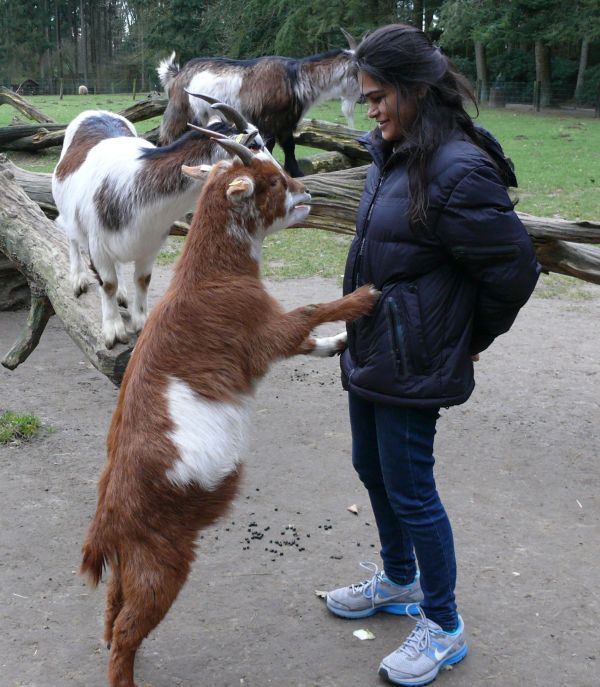 Nisha Mohota was really confident! But no one can beat the co-founder of ChessBase Frederic Friedel. Check the video below:
Frederic Friedel's love for animals! 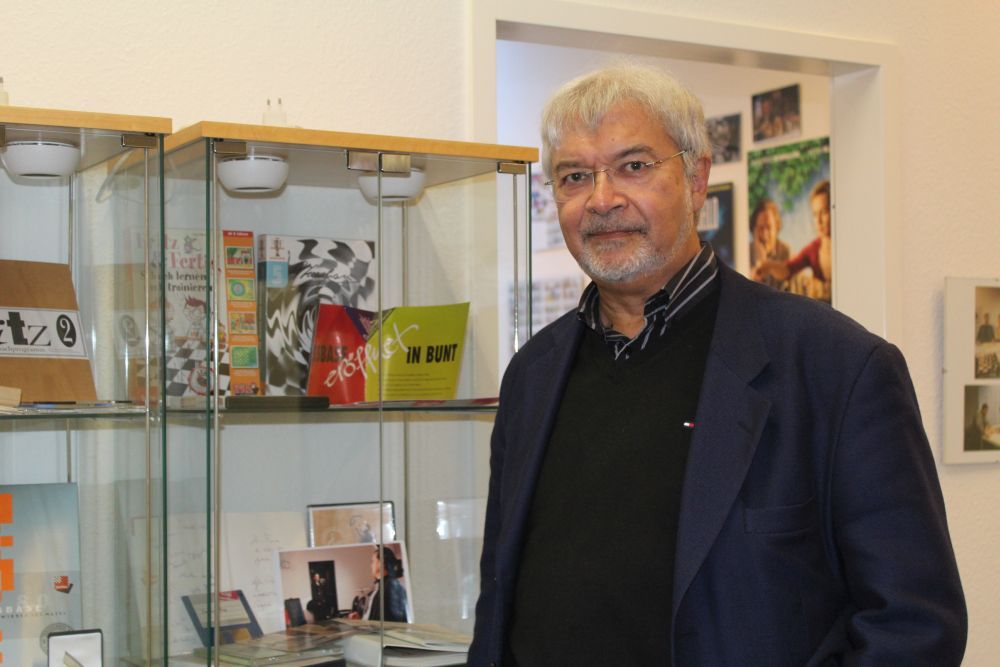 Nihal's visit to Hamburg would have been impossible without the efforts of Frederic Friedel. Did you know Frederic was born in India and spent the early years of his life wandering in the forests of Lonavla in Maharashtra? Well, that's a story for another time!

Do not forget to get the latest issue of ChessBase Magazine 178. For just Rs.699/- you really get some very high quality content. Apart from Nihal's video, some of the highlights of the issue are:

Get the ChessBase Magazine 178 now!