ChessBase Magazine is the most comprehensive and most sophisticated chess magazine there is. World class players analyse their brilliancies and explain the ideas behind the moves to you, opening specialists present the latest trends in opening theory and offer exciting ideas for your repertoire. Master trainers in the fields of tactics, strategy, and the endgame show you the tricks and techniques a successful tournament player needs! The downloadable DVD has several hours of video content to learn from, practice and enrich your knowledge.

Highlights of this issue #197 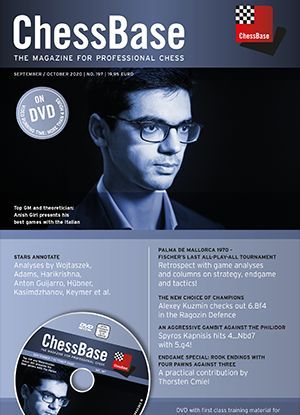 Anish Giri presents his best games with the Italian –  structures, strikes and lots of expertise!

An extensive retrospect with game analyses + columns by Marin, Mueller and Reeh

The new choice of champions

Alexey Kuzmin checks out 6.Bf4 in the Ragozin Defence

An aggressive gambit against the Philidor

“A game to remember for years to come!”

Castling at your own risk!

Robert Ris red-flags 6.Ng5 and 7.h4 in the Anti-Sveshnikov 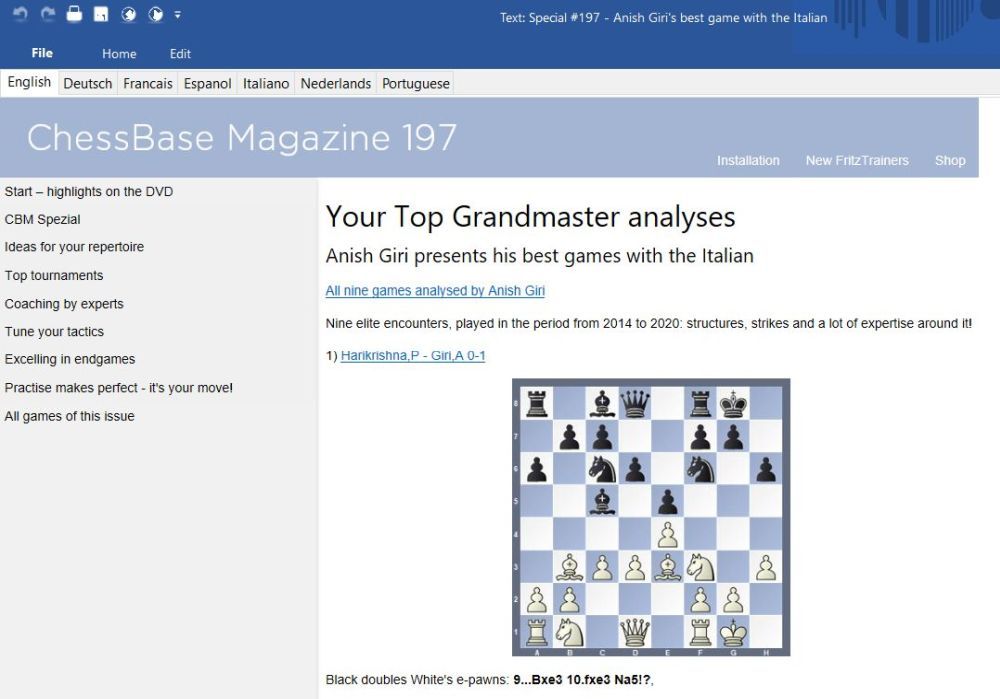 Anish Giri provides entertaining and instructive comments on all phases of his games. Enjoy nine top class games with a highly topical opening being analysed extensively by one of the world’s top grandmasters! 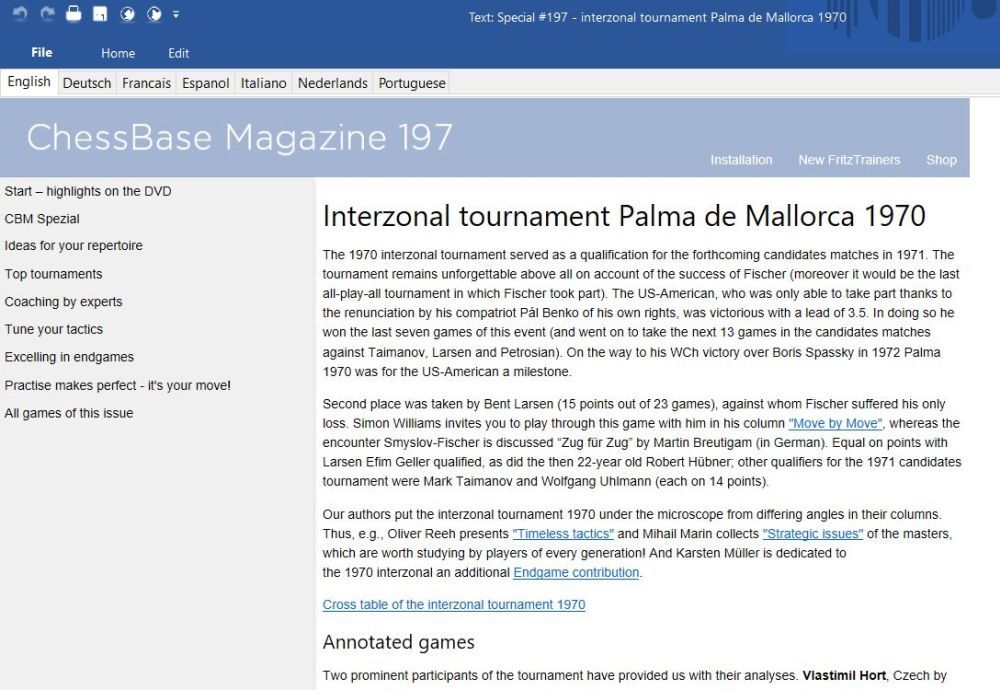 Retrospect on one of the greatest tournaments in chess history! Our authors put the 1970 interzonal tournament under the microscope from differing angles in their columns. In addition, Robert Hübner and Vlastimil Hort, two prominent participants in the event, offer insights into their own games. 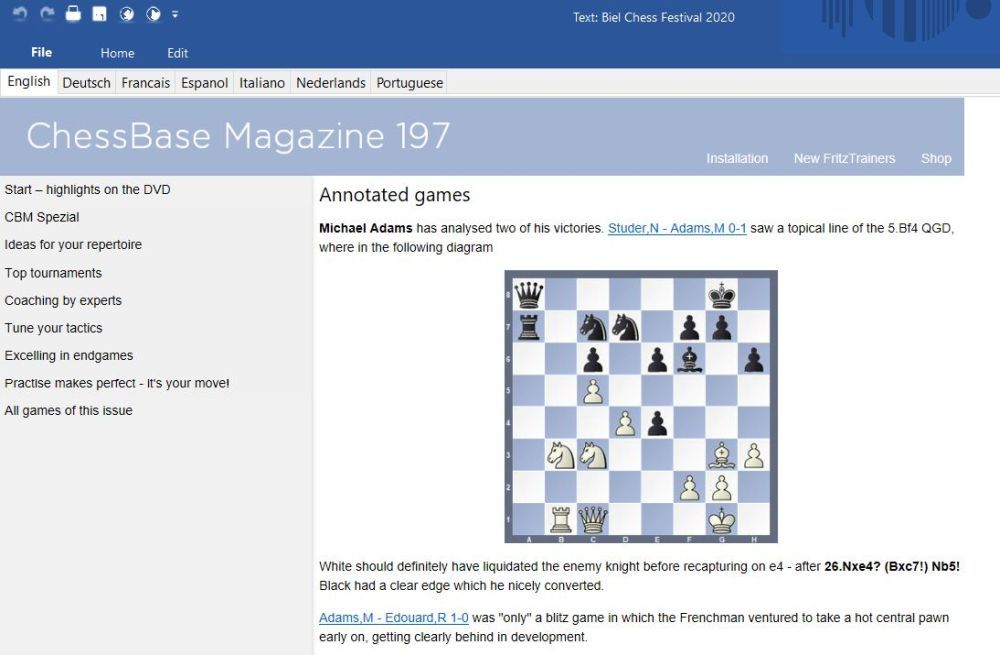 The GM Triathlon was won by the best allrounder, Radoslaw Wojtaszek, just ahead of the best player in classical chess, Harikrishna. They both annotate their best games, as do Michael Adams, Vincent Keymer, David Anton Guijarro, Romain Edouard and Noel Studer. 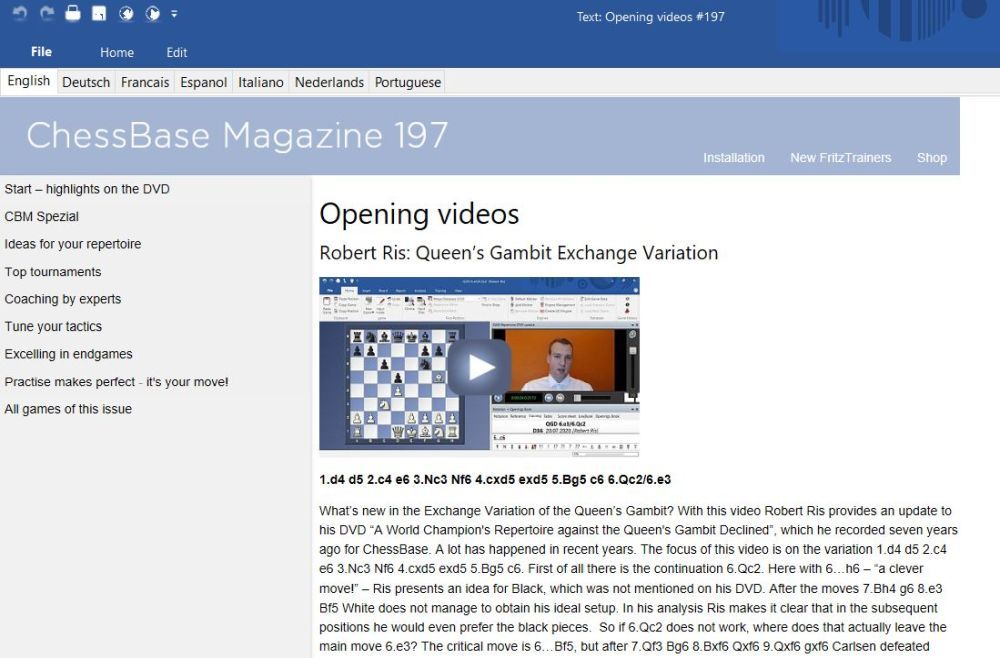 The Queen’s Gambit is twice up for discussion: Mihail Marin explains why Taimanov’s idea against Rubinetti’s Queen’s Gambit Accepted is first class even today. Robert Ris brings you up to date in the Exchange Variation. And Daniel King shows how Black should meet the Bishop’s Gambit. 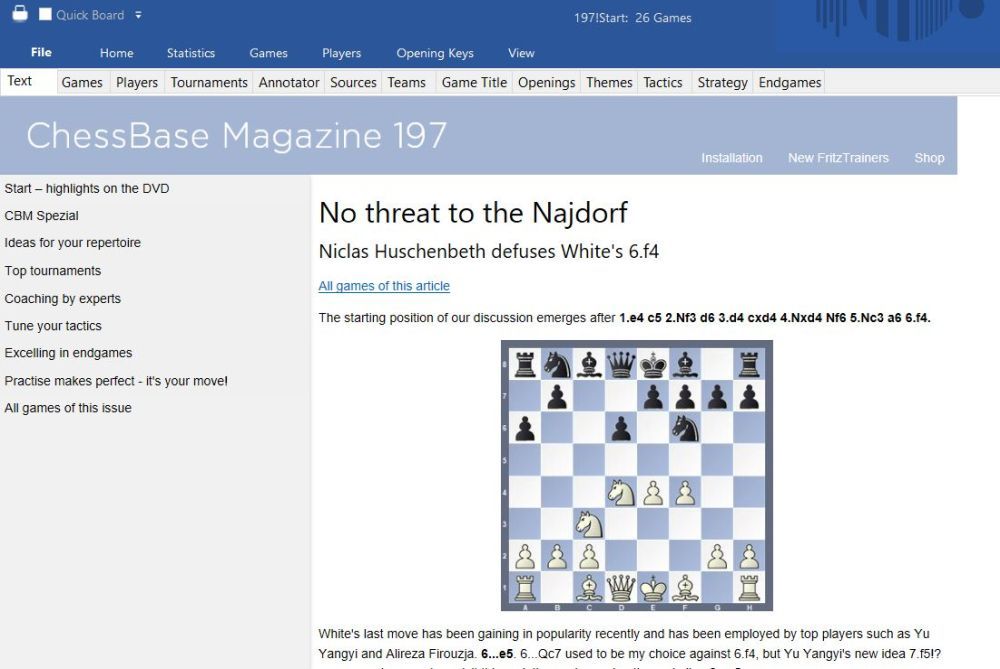 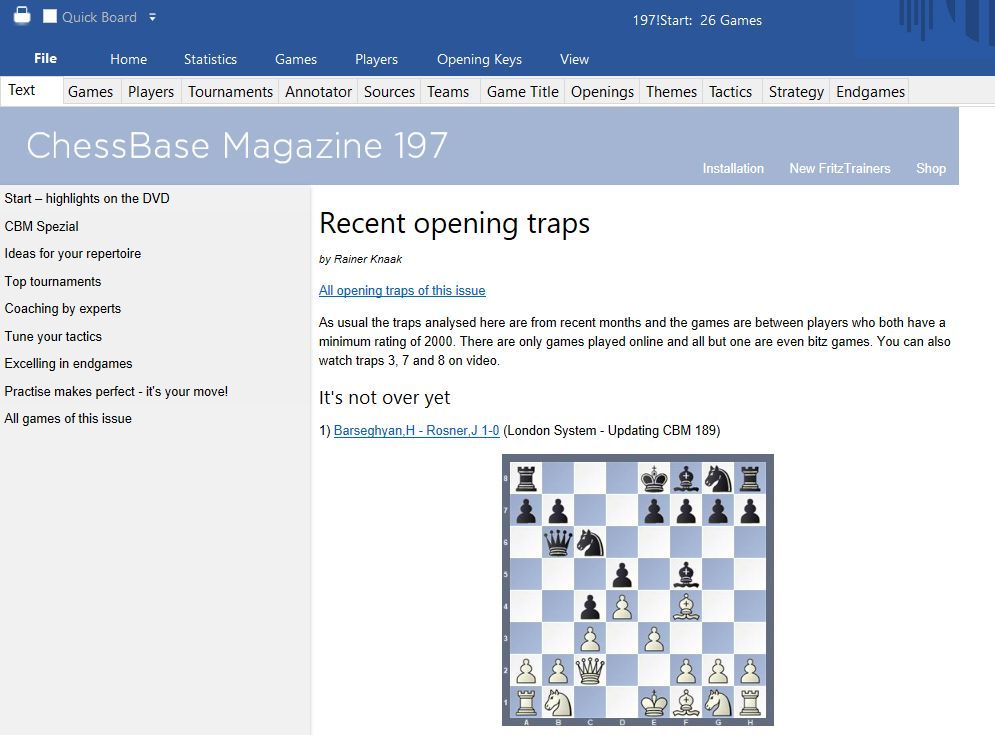 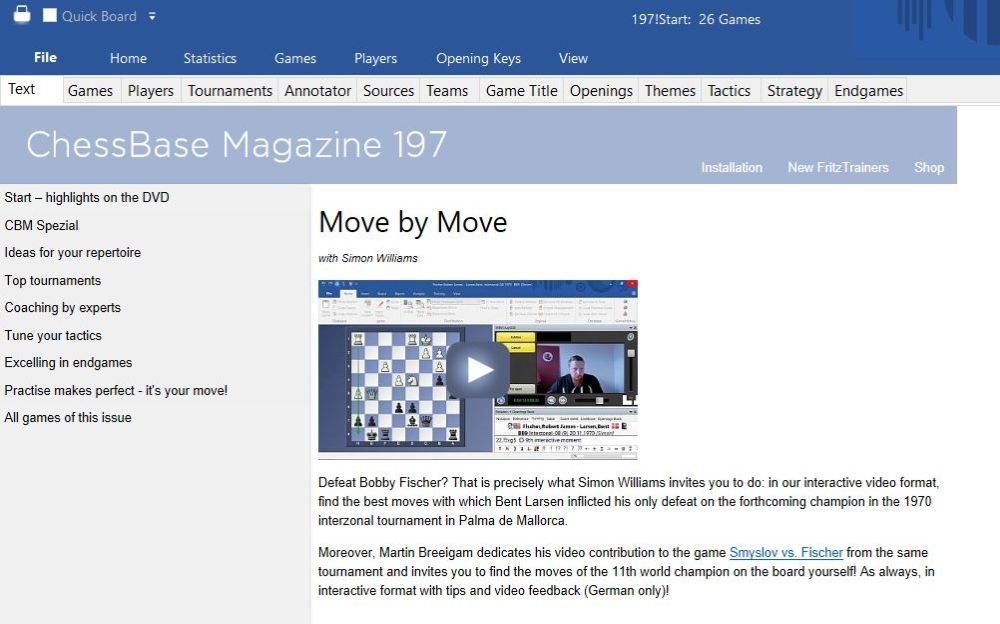 Defeat Bobby Fischer? That is precisely what Simon Williams invites you to do: in our interactive video format, find the best moves with which Bent Larsen inflicted his only defeat on the forthcoming champion in the 1970 interzonal tournament in Palma de Mallorca. 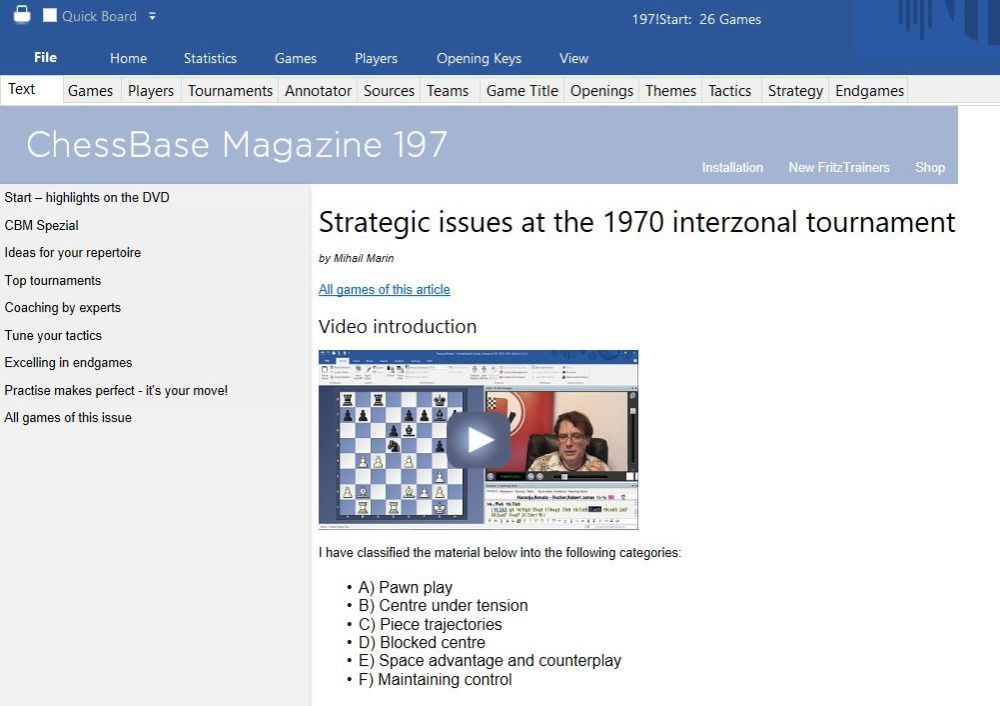 Mihail Marin has put under the microscope 15 games from the 1970 interzonal tournament from the point of view of strategy and put together a comprehensive training session including an introductory video.

The coach of the German National Team, Dorian Rogozenco, demonstrates the game Anderssen-Zukertort (1869). An attacking win with a "mysterious" plan (Kg1-h1, Rf1-g1, g2-g4) topped off with a queen sacrifice! 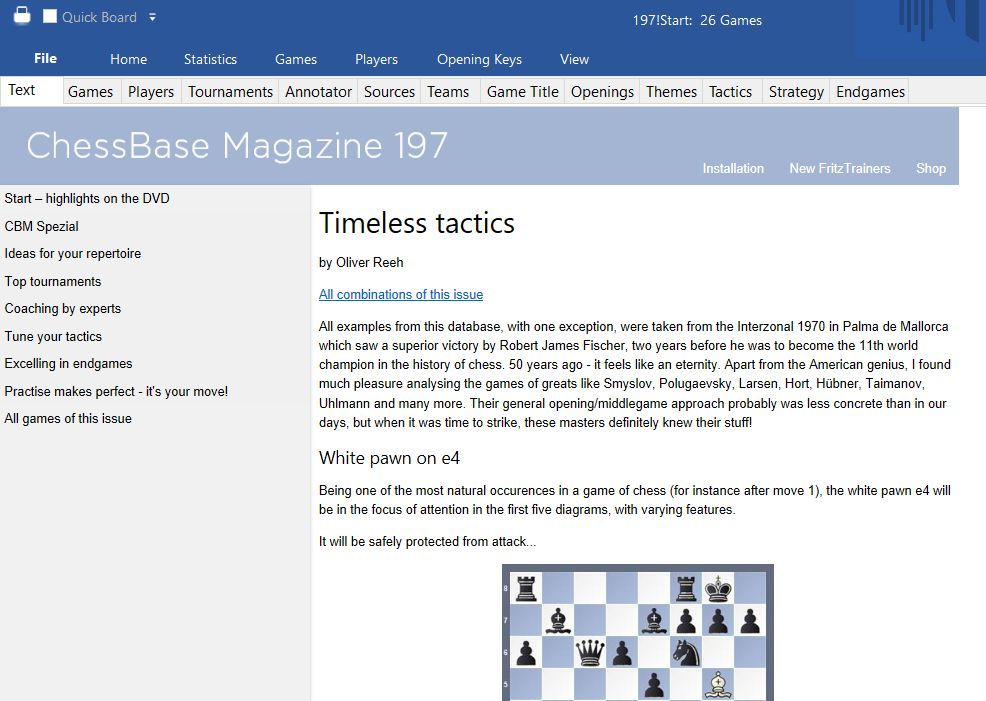 It has been 50 years since Palma 1970. Oliver Reeh invites you to share with him his enthusiasm for the combinations of Fischer, Smyslov, Polugaevsky, Hübner, Hort among others! It includes three favourite combinations in interactive video format.

Endgames now and then 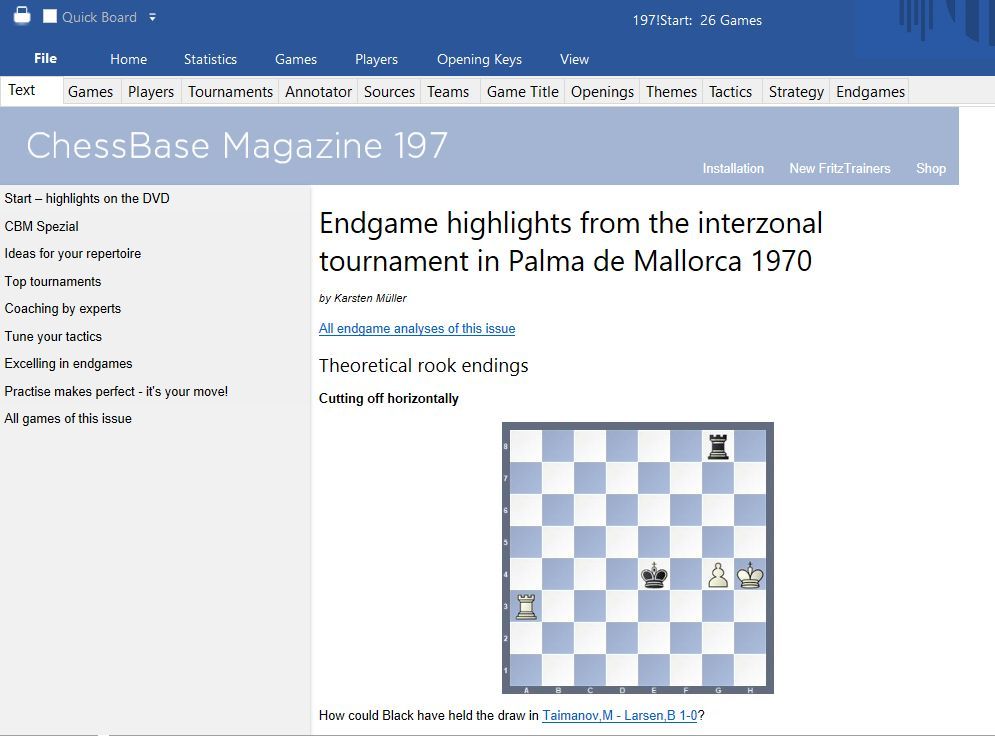 Karsten Müller presents in two separate articles endgame highlights from opposing worlds of chess: from the 1970 interzonal tournament and from the online tournament Clutch Chess 2020! Plus endgame special "Rook endings with four pawns against three" by Thorsten Cmiel.