ChessBase Magazine is the most comprehensive and most sophisticated chess magazine there is. World class players analyze their brilliancies and explain the ideas behind the moves to you, opening specialists present the latest trends in opening theory and offer exciting ideas for your repertoire. Master trainers in the fields of tactics, strategy, and the endgame show you the tricks and techniques a successful tournament player needs! DVD with several hours of video, training material, annotations by top players like So, Duda, Giri, Humpy, Nihal, Paehtz and more. Giri on the surprise weapon in the Scandinavian and more. Photo: ChessBase

Highlights of this issue #198 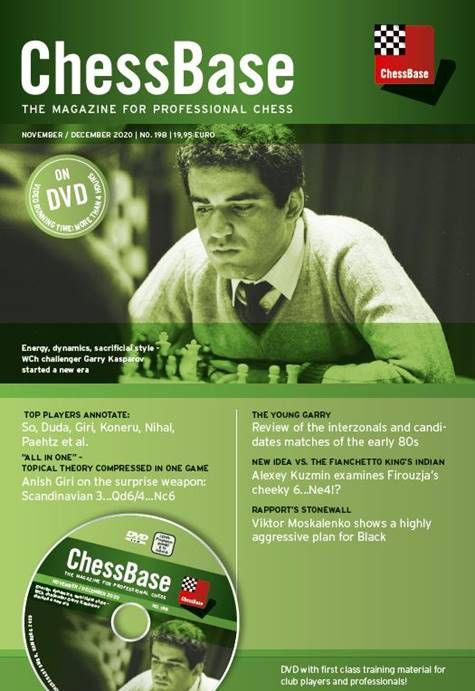 Special: Interzonals and candidates matches of the early 80s

An extensive review featuring columns on strategy, tactics and endgame

The most dynamic player ever!

Move by move, Simon Williams dissects the classic Beliavsky-Kasparov from their match 1983

A natural mistake – and perhaps a lucky one...

Anand Jan Krzysztof Duda is very critical of his own success - and also analyses the rematch!

White gambits against the Benko

A must-know: rook vs. bishop

Karsten Müller elaborates on one of the most important practical endgames

Losing the thread, winning the game

CBM Special: Kasparov as a challenger 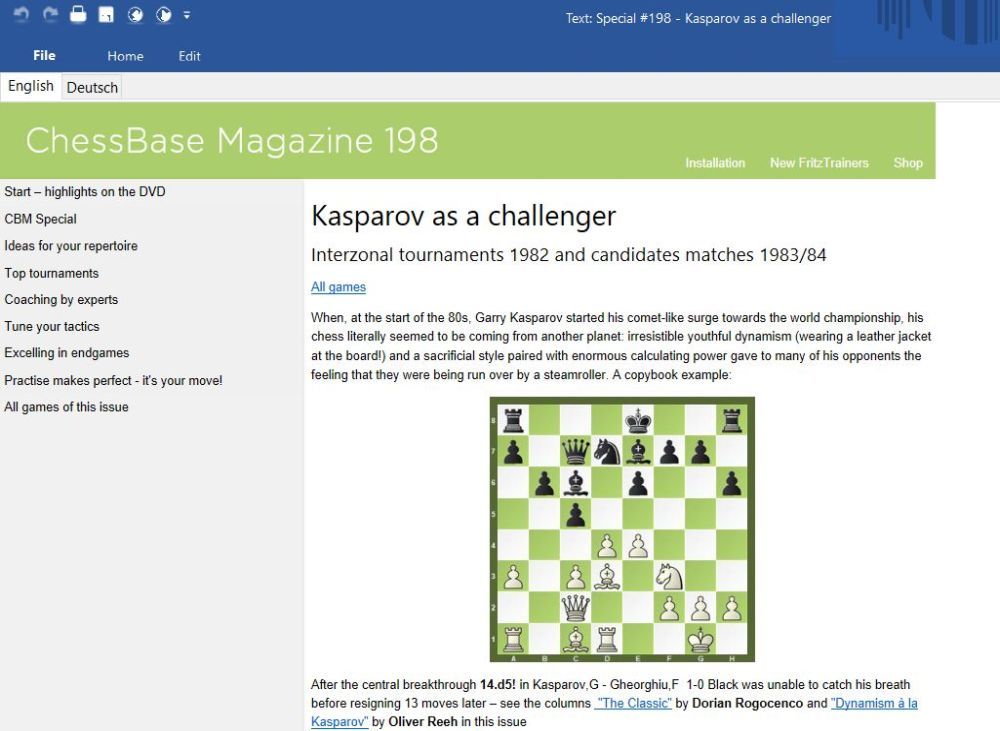 Garry Kasparov’s route to becoming a challenger for the WCh is the focus for this issue. In their columns our authors cast light on the games of the 13th world champion from this period. 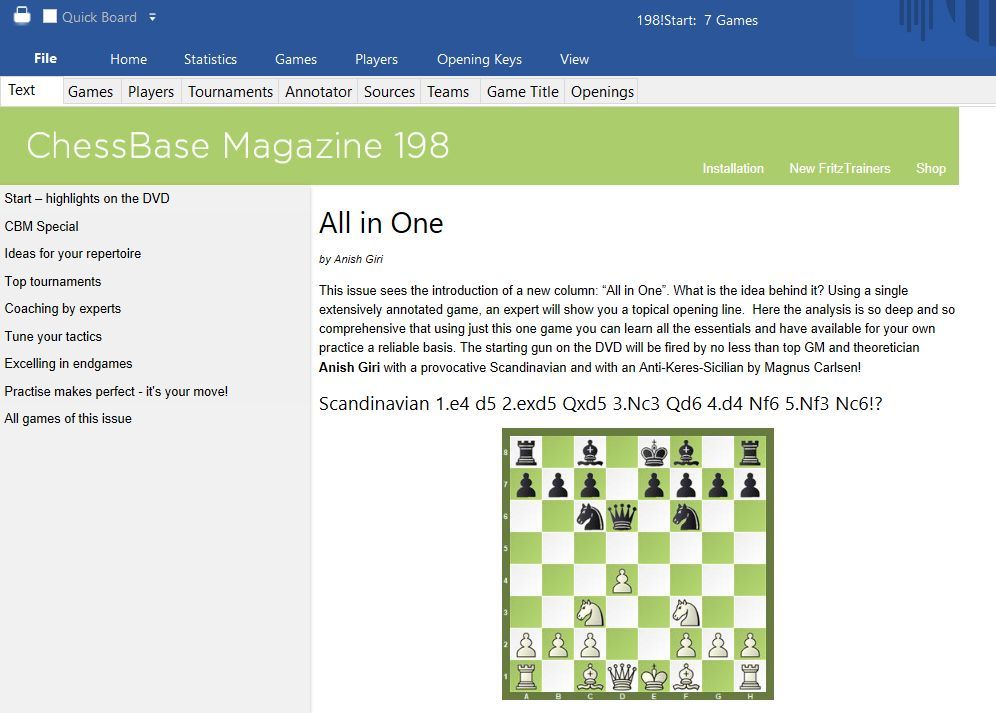 This issue sees the introduction of a new column: “All in One”. What is the idea behind it? Using a single extensively annotated game, an expert will show you a topical opening line. Here the analysis is so deep and so comprehensive that using just this one game you can learn all the essentials and have a reliable basis available for your own practice. The starting gun on the DVD will be fired by no less than top GM and theoretician Anish Giri! On the program: 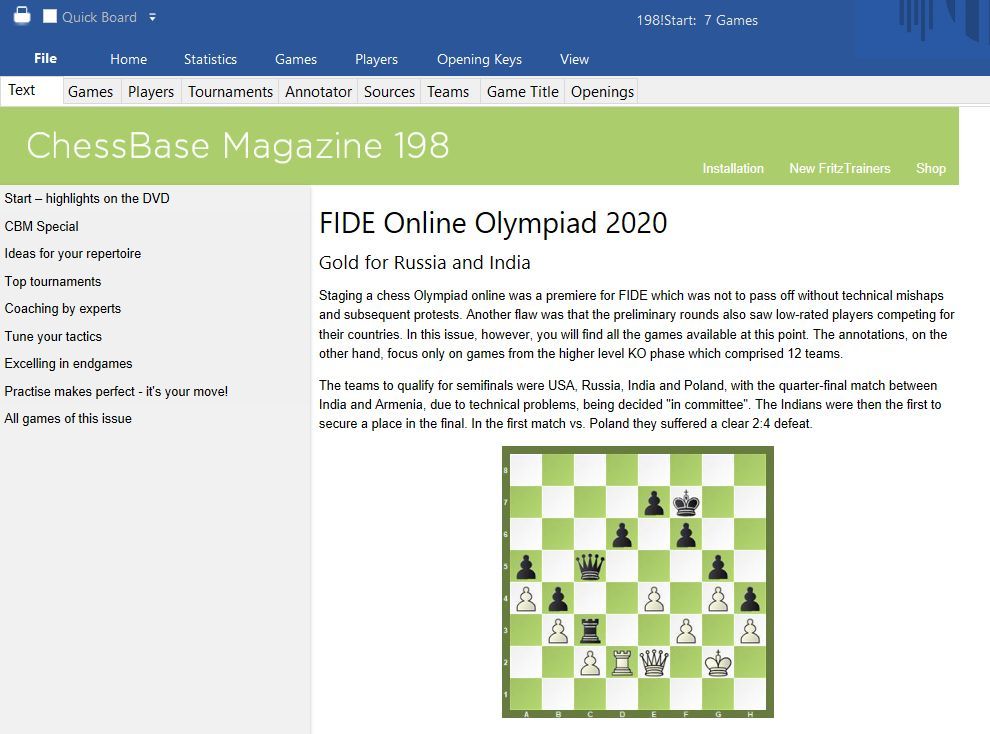 FIDE Online Olympiad 2020: Gold for Russia and India. Jan-Krzysztof Duda, Wesley So, Nihal Sarin, Humpy Koneru, Aleksandra Goryachkina, Elisabeth Pähtz et al. annotate their games from the knockout phase of the Olympiad. In the final of the Magnus Carlsen Chess Tour 2020, the founder of the Online Tour turned out in the last minute of the final tournament to be the winner. Peter Heine Nielsen annotates the decisive Armageddon game. 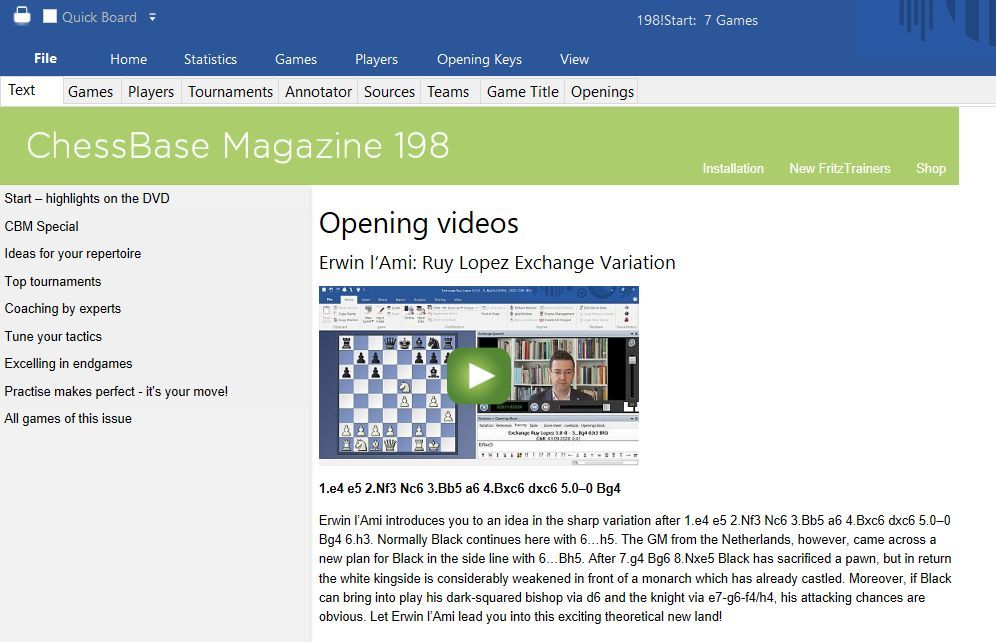 Erwin l'Ami shows how Black can play for a win in the Ruy Lopez Exchange Variation. Daniel King puts the Kalashnikov Variation under the microscope with the help of the game Anand-Maghsoodloo. And Mihail Marin looks into a recent suggestion of the world champion in the Nimzo-Indian! 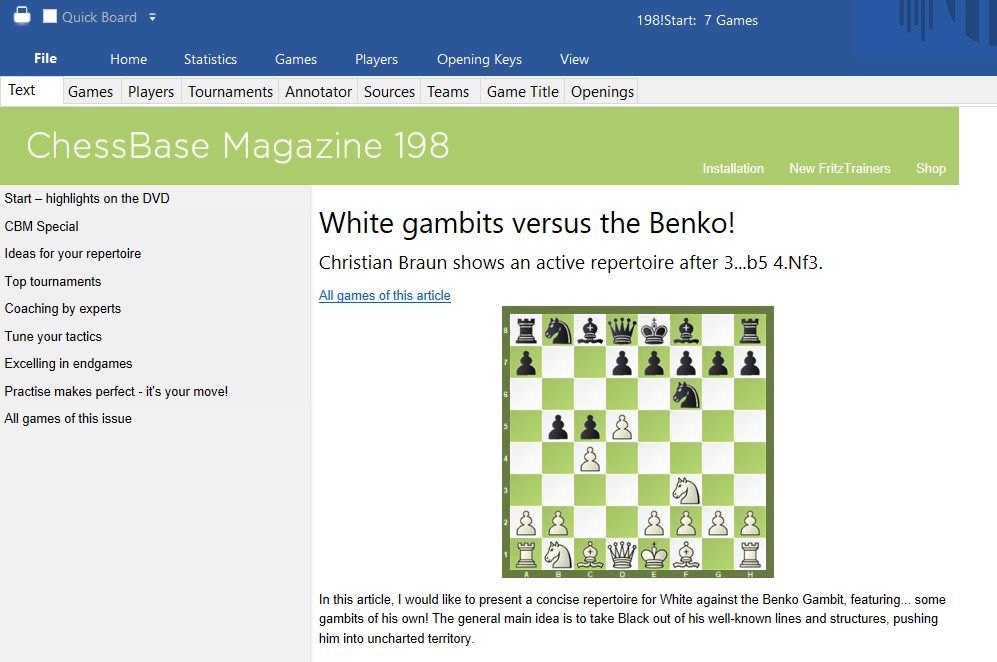 Robert Ris: French McCutcheon with 8.Bc1 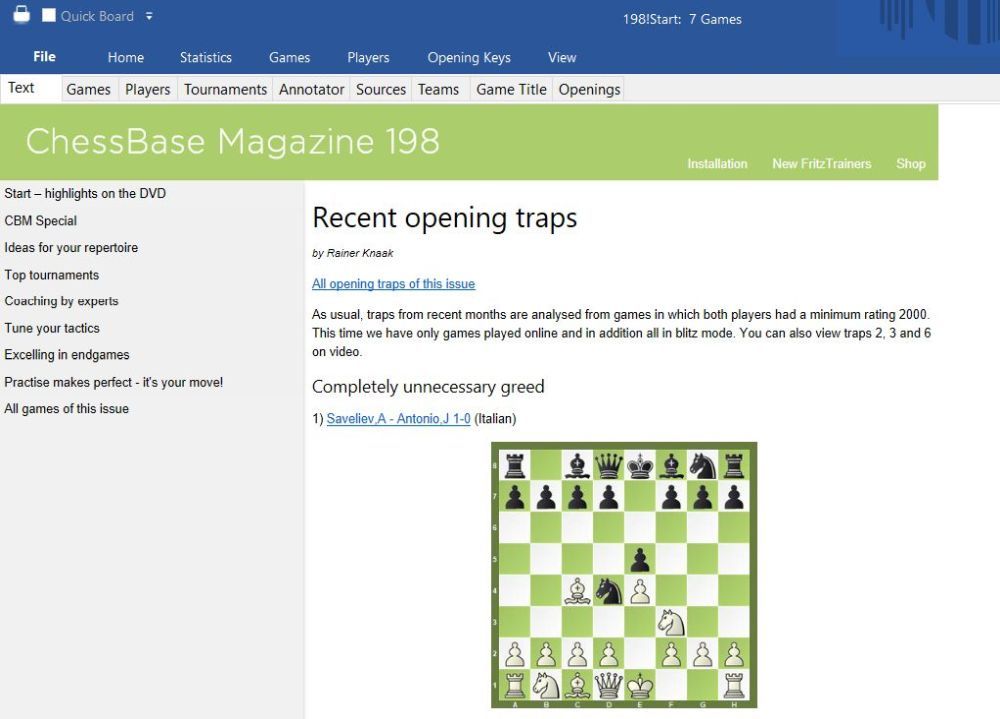 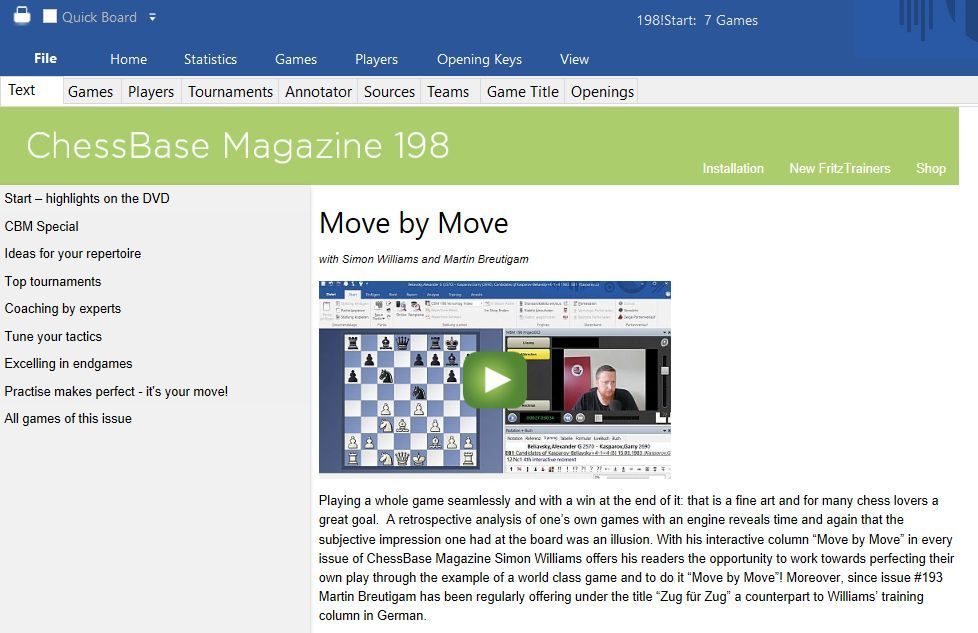 “Think like Garry! One of the most dynamic players ever in the world.” Simon Williams invites you in his interactive article to find Kasparov’s moves from the 8th and clinching game from the candidates match of 1983 against Alexander Beliavsky. In this training section what is required is aggressive play in the King’s Indian Defence. Off you go! Take command of the black pieces for the previous world champion and execute the move you consider to be the best available. Enjoy yourself and we wish you success in finding Kasparov’s moves!

“Strategy – The interzonal tournaments of 1982” 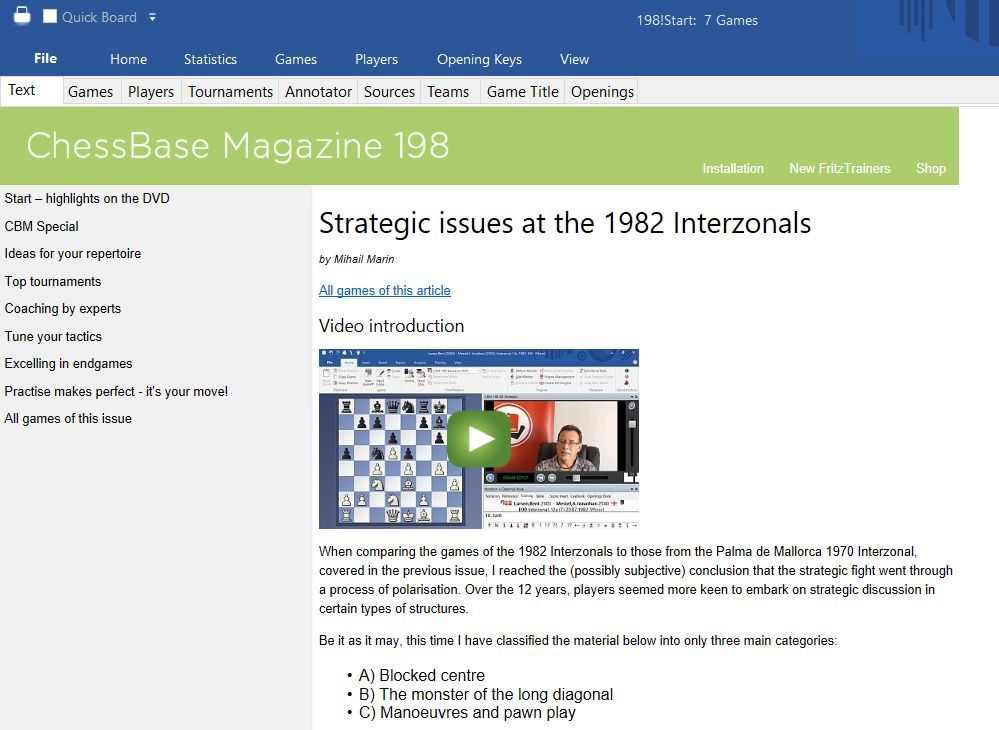 When looking through the material Mihail Marin came across many strategically rich games and in his article deals with three topics: “The blocked centre”, “The monster on the long diagonal” and “Manoeuvres and pawn play”. 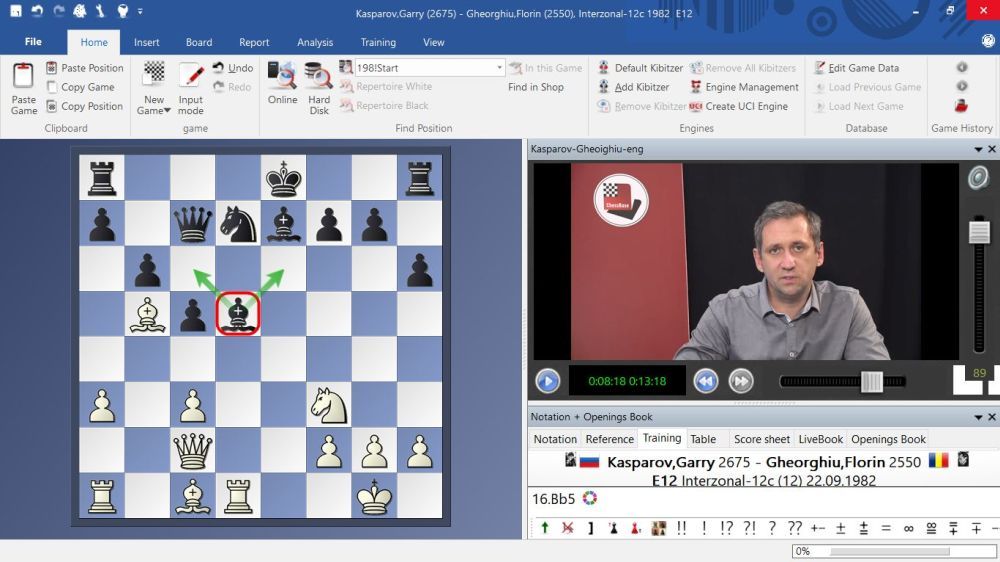 The game Kasparov-Gheorghiu from the interzonal tournament of 1982 had been eyed up by several ChessBase Magazine authors for their articles. The trainer of the German Federal team Dorian Rogozenco secured it for his “Classic”. 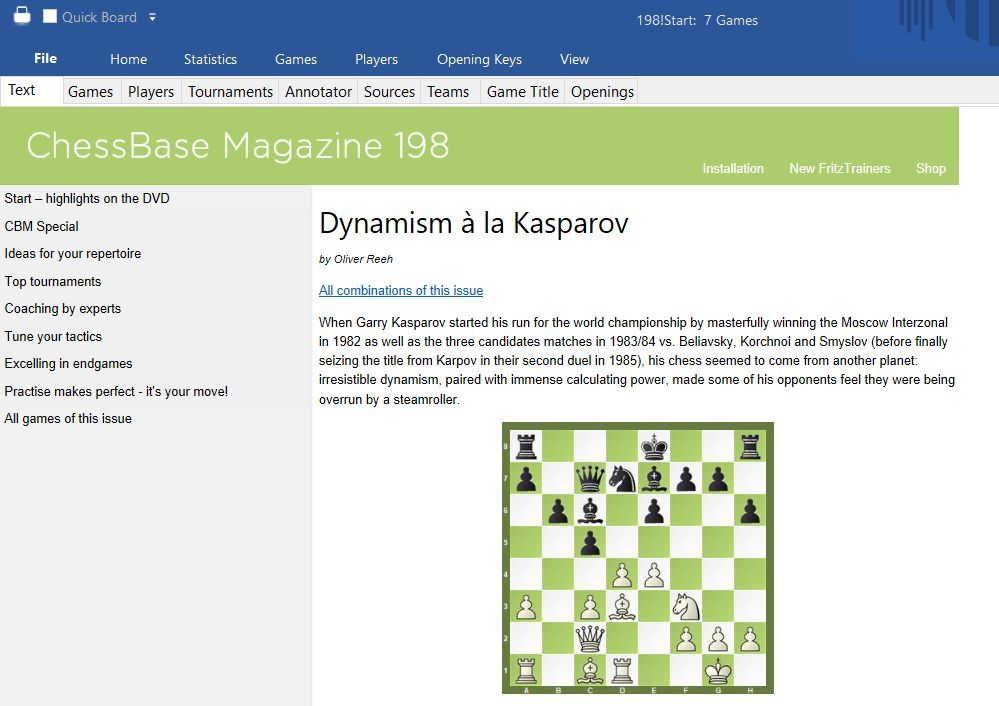 When Kasparov was starting his run at the world championship, his chess appeared to be coming from another planet: irresistible dynamism, paired with immense powers of calculation. Oliver Reeh’s article contains 27 games studded with training questions. Moreover, he presents his three favourite combinations in interactive video format! 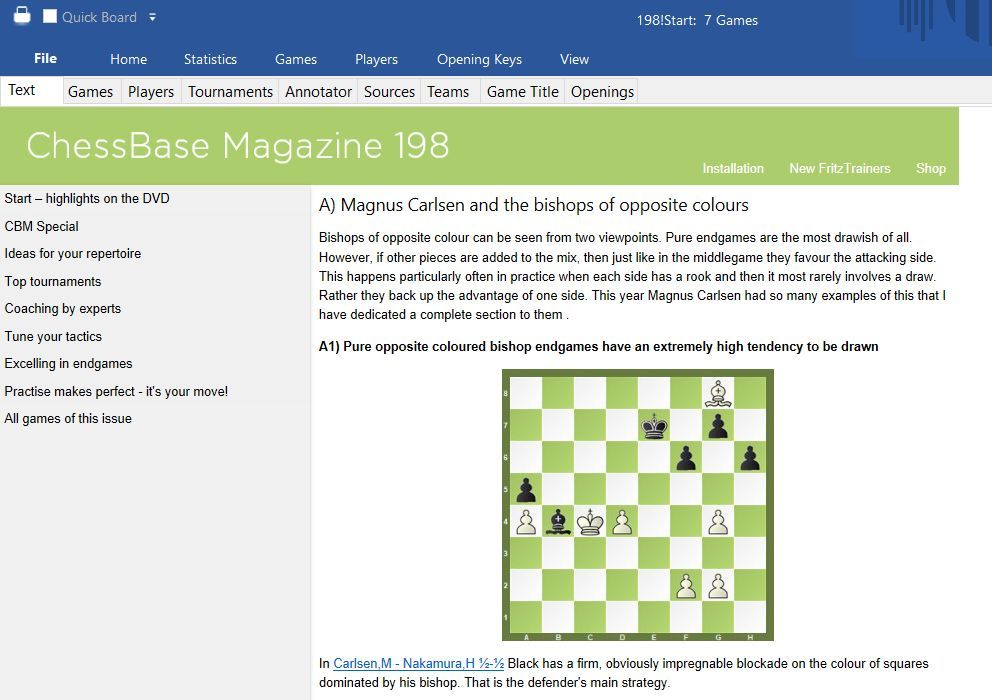 Endgame expert Karsten Müller has contributed no less than five articles: “The role of the bishop pair in Kasparov’s way to his first WCh match”, “Endgame highlights”, “The duel between rook and bishop”, “Recent rook endings” and “Readers write”.