CBM 188 has been launched and now it's available for everyone! For all those who are not aware about the ChessBase Magazine (Better known as CBM), it is a magazine for the chess professionals. So what do you get my spending Rs.824? Well, you can enjoy top class training in the new ChessBase Magazine layout! Tata Steel 2019 with analyses by Anish Giri, Vishy Anand, Vidit, Peter Svidler etc. Yannick Pelletier, Erwin l'Ami and Mihail Marin present selected games in video format. Plus 11 opening articles with new repertoire ideas, e.g. Dutch with 2.Bg5!? and more. Here's a look into what you can expect if you purchased the ChessBase Magazine 188! 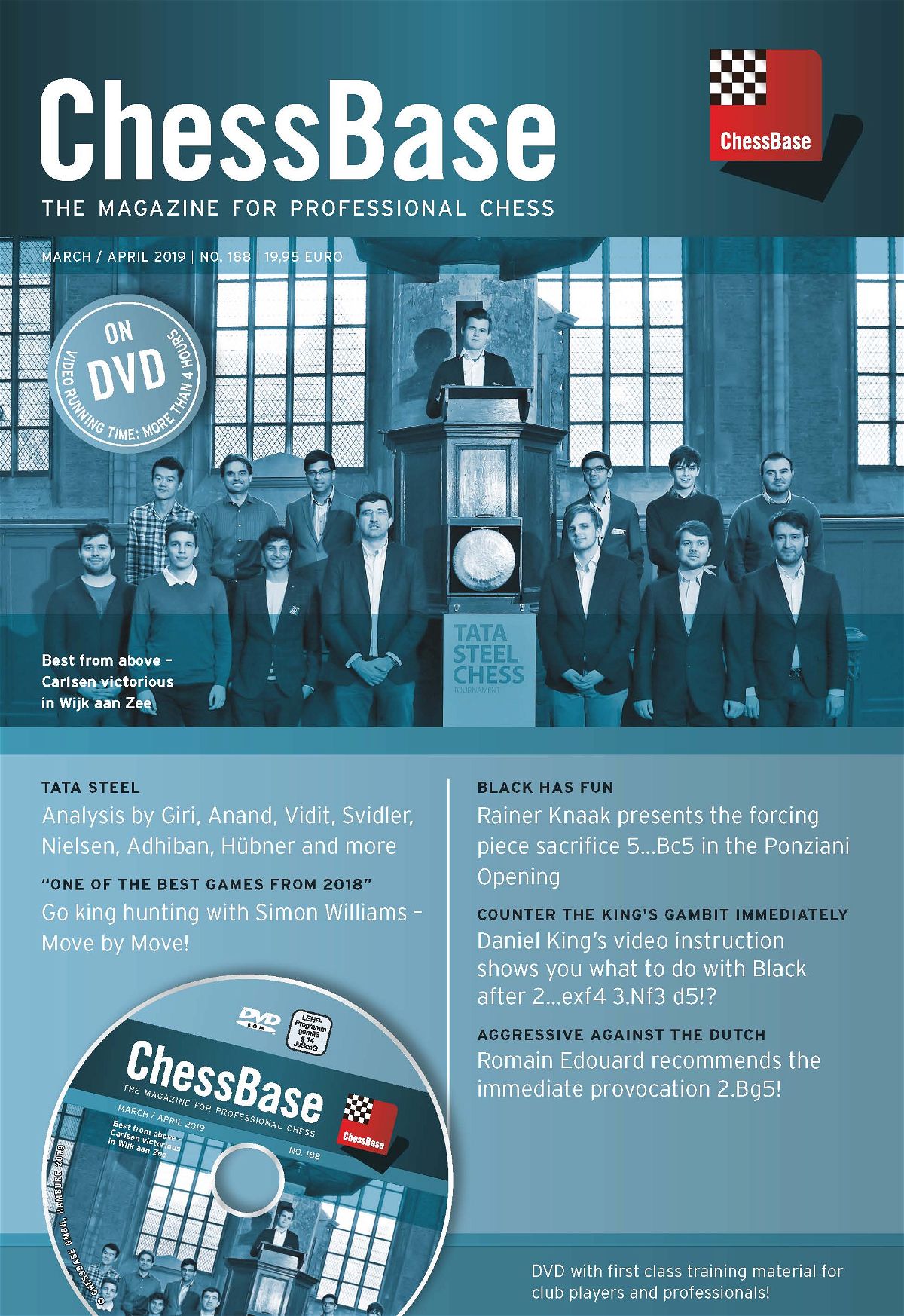 Highlights of this issue

(c) Black has all the fun

Daniel King’s video instruction shows you what to do with Black after 2...exf4 3.Nf3 d5!?

(e) Aggressive against the Dutch

There are three classic openings which await you in this issue. Against the King’s Gambit, Daniel King recommends to you, e.g., the early advance d7-d5. In half an hour’s video running time King shows you all you need to know in order to be able to meet the King’s Gambit with confidence! 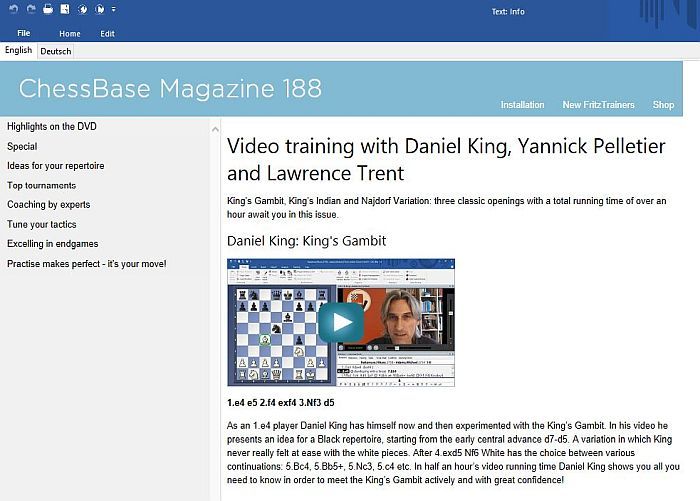 Twelve Opening articles with new ideas for your repertoire 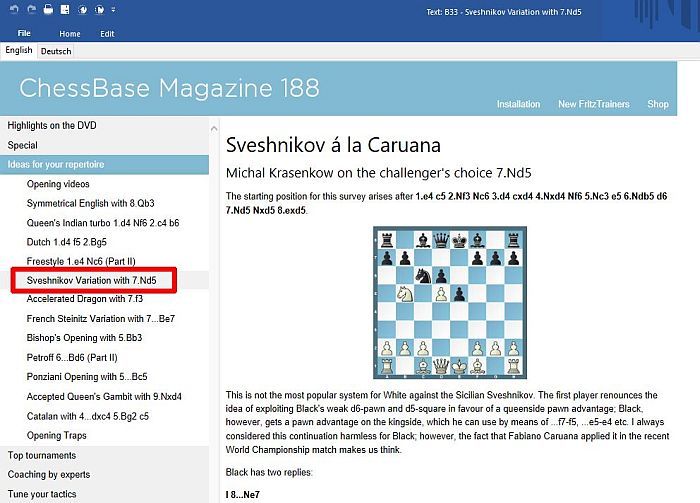 Anish Giri, Vishy Anand, Vidit, Peter Svidler, and Robert Hübner comment on the best games from Tata Steel! In addition, Yannick Pelletier, Erwin l'Ami, and Mihail Marin present games of the “Masters” and the “Challengers” in the video. 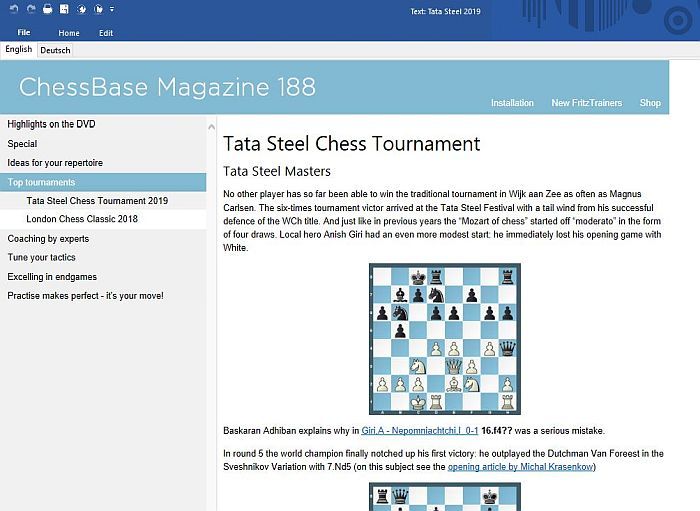 “Move by Move” with Simon Williams

“One of the best games, if not the best game from 2018” – that is the promise Simon Williams makes to you at the start of his interactive training article on the DVD. Join the English grandmaster on the search for amazing attacking moves! 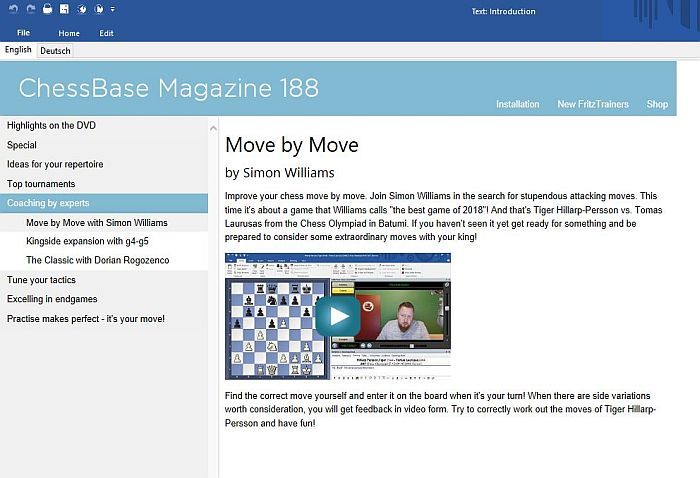 Once more Karsten Müller’s article is wide-ranging. His analysis of recent rook endings contains an introductory text as well as an introductory video. In addition, the endgame expert from Hamburg has recorded two videos on Magnus Carlsen’s endgames with bishop+knight against rook from Wijk aan Zee and looks into readers’ letters as well as much more. 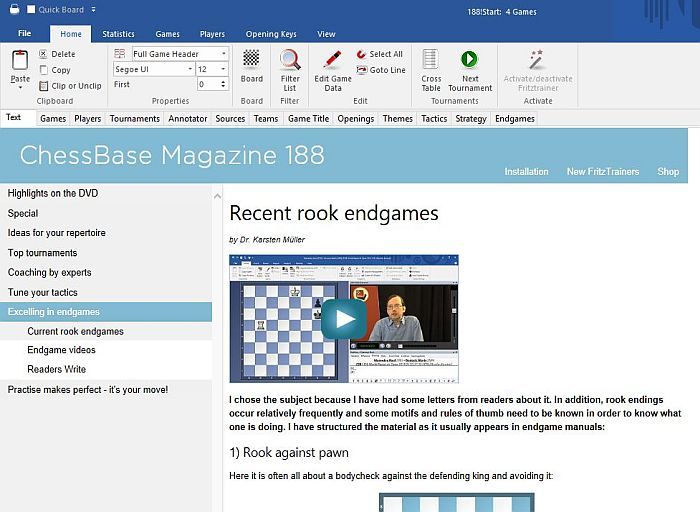 Under what conditions is a pawn storm on the opponent’s position promising when both monarchs have castled kingside? Mihail Marin explains the strategies based principally on classical games (including introductory video). 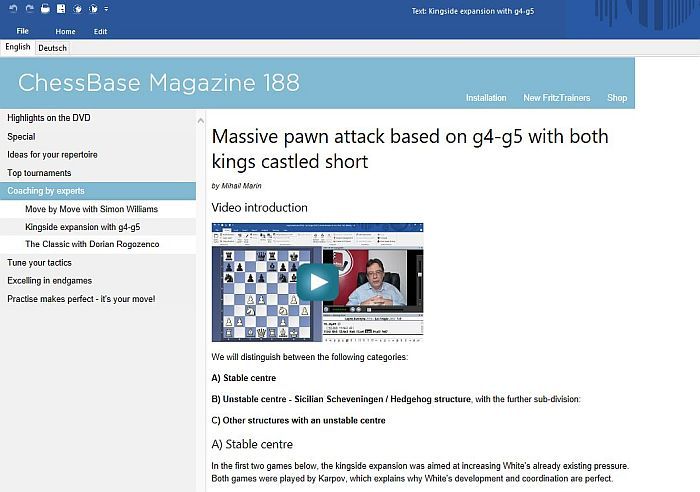 Tactics: “Time to be brilliant!”

Oliver Reeh’s contribution consists of 28 games with numerous training questions and an introductory text with links to all the games. In addition, there are three videos in an interactive format. 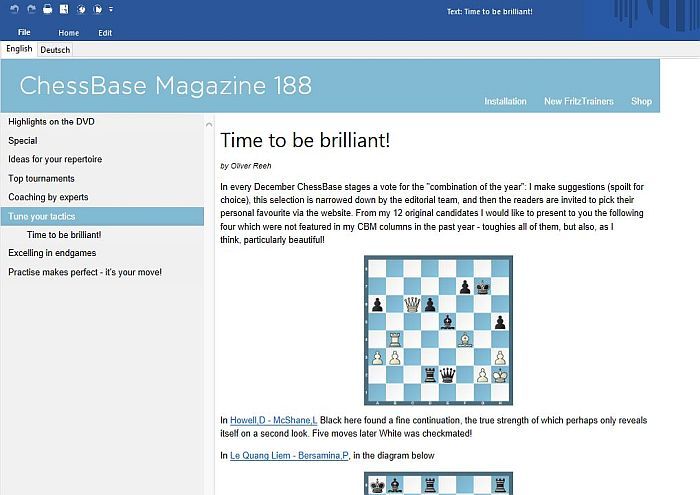 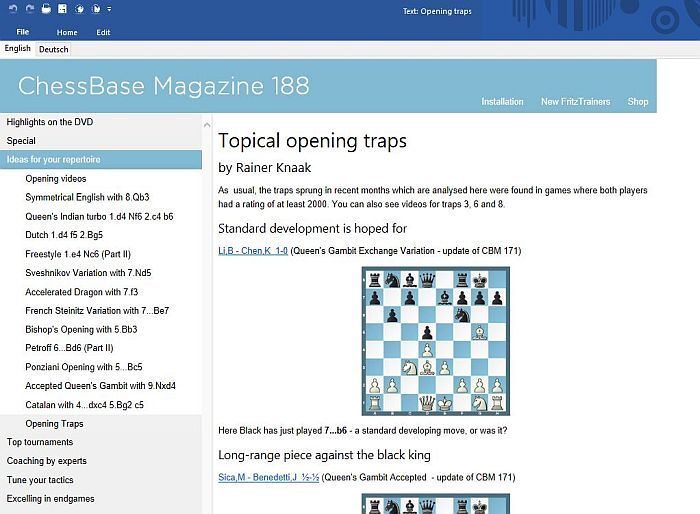 German trainer Dorian Rogozenco shows us the game Nimzowitsch-Capablanca, St. Petersburg 1914. Let him explain to you how in short order the Cuban brought down his opponent’s position by pressure on the semi-open files on the queenside supported by his bishop on g7. 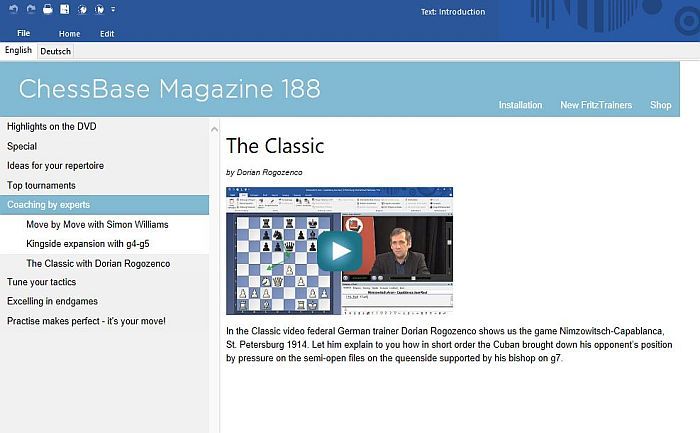 Load the table of contents in pdf format!

Did you know that with the CB 15 Mega Pack you now get not only ChessBase 15 + Mega Database 2019 + ChessBase Premium Account, but you also get six issues of ChessBase Magazine starting from CBM 187.