Highlights of this issue #208

On the first page of ChessBase Magazine #208 you have direct access to the editors' recommendations: the highlights of the issue! 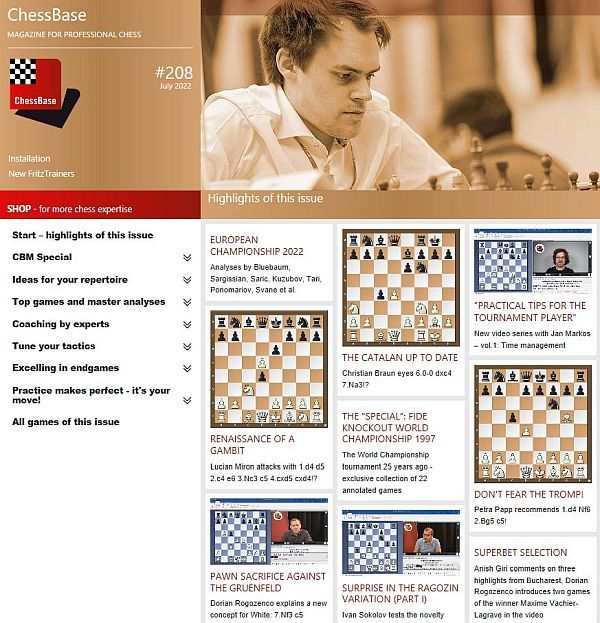 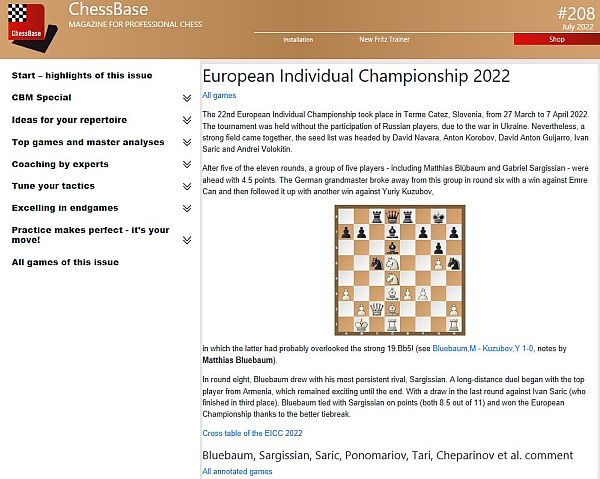 European Championship 2022: Matthias Blübaum celebrated the greatest success of his career so far by winning the European Championship. The new champion comments on two of his games as well as the winners of the silver and bronze medals, Gabriel Sargissian and Ivan Saric. Plus analyses of many other players, including Ruslan Ponomariov, Aryan Tari, Ivan Cheparinov, Rasmus Svane, Yuriy Kuzubov, Maxime Lagarde and others. 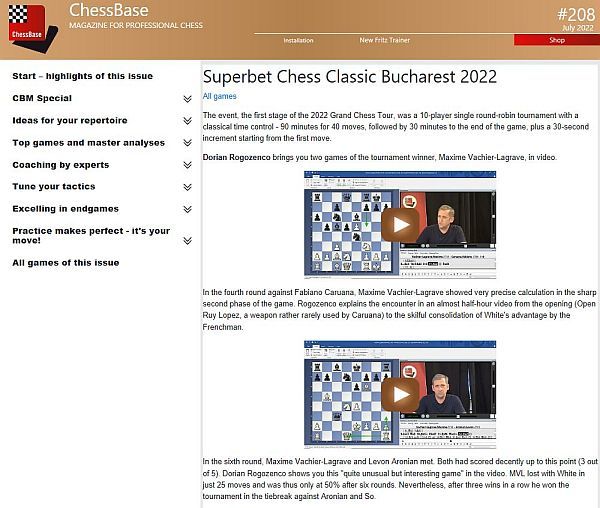 Superbet Bucharest 2022: Maxime Vachier-Lagrave beat Levon Aronian and Wesley So in the tiebreak. Anish Giri comments on three highlights from Bucharest, Dorian Rogozenco presents two games of the winner in the video. Our new author, Jan Markos, is a Slovakian chess book author, trainer and grandmaster. His first contribution is about time management. First, Markos elaborates on three general and easy-to-implement recommendations in the more than 20-minute video. At the beginning there is a fundamental question: in which types of positions should we invest time at all - and in which not? 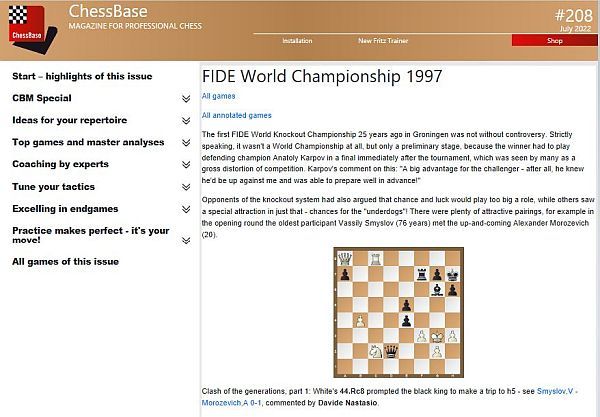 CBM authors analyse their favourite games from the first knockout world championship 25 years ago. An exclusive collection of 22 annotated games awaits you! 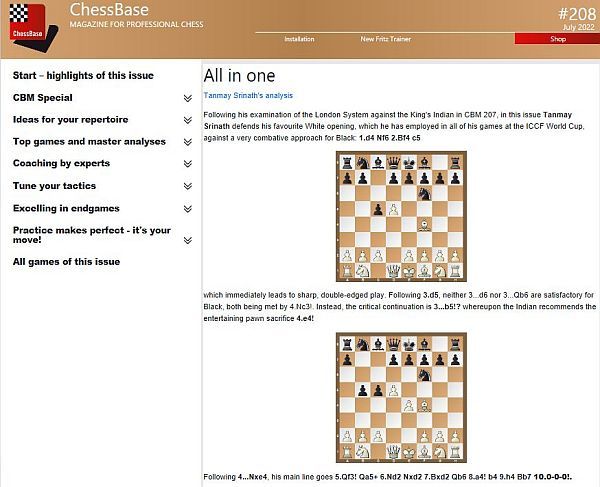 Following his examination of the London System against the King's Indian in CBM 207, Tanmay Srinath defends his favourite opening with White in this issue against an exceedingly combative approach by Black: 1.d4 Nf6 2.Bf4 c5, which immediately leads to sharp and double-edged play. After 3.d5 b5!? the Indian recommends the enterprising pawn sacrifice 4.e4! 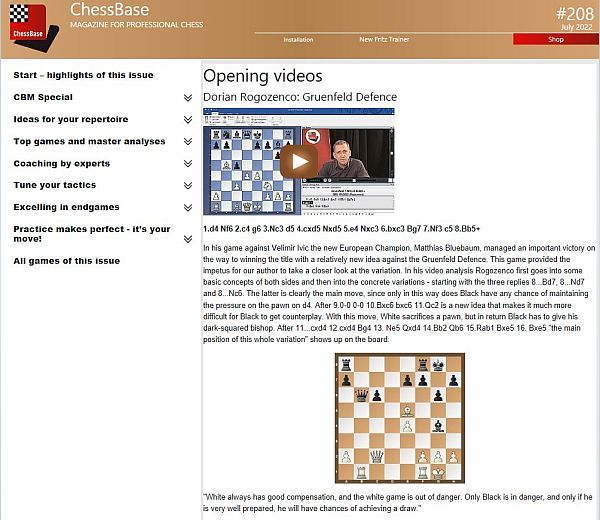 Dorian Rogozenco presents a pawn sacrifice against the Gruenfeld Defence, which the new European Champion also used successfully. Ivan Sokolov came across the innovation 8...h5 in the Ragozin Variation, which he examines in detail in this and the upcoming CBM. And Mihail Marin explains why in the Slav Defence after 5...Bf5 he no longer fears the move 6.Ne5. 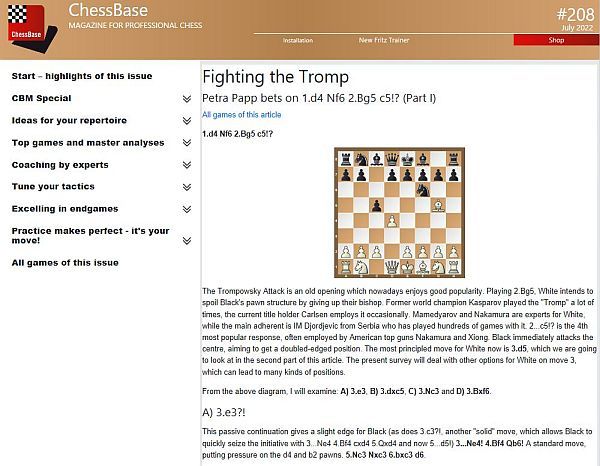 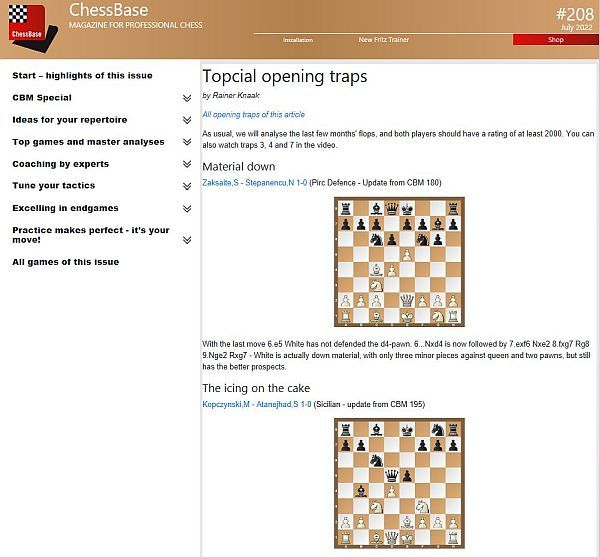 "The second look", "Unspoken invitations" and much more. - Rainer Knaak examines eight traps from current tournament practice, three of which he also presents in video format. 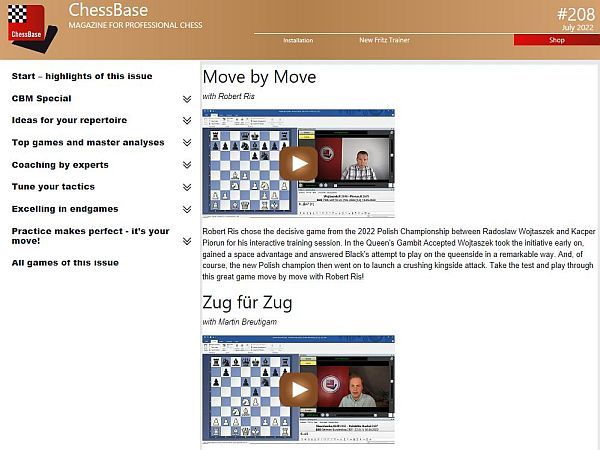 Test your chess move by move with Robert Ris! Radoslaw Wojraszek's brilliant game against Kacper Piorun is made for the interactive training format: from seizing the initiative to preventing counterplay to a successful attack on your opponent’s king!

"Knockout Strategies at the 1997 World Championship" 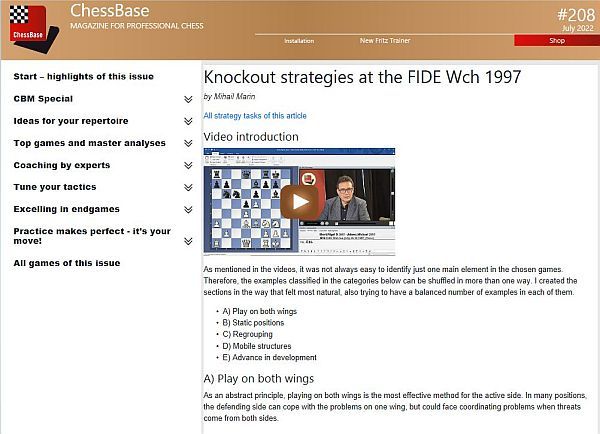 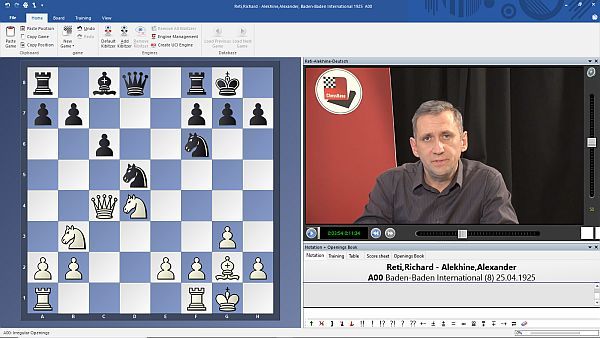 Alexander Alekhine himself described his game against Richard Réti in Baden-Baden in 1925 as one of his most brilliant games ever. Enjoy the video presentation by Dorian Rogozenco!

Tactics: "Use your back rank!" 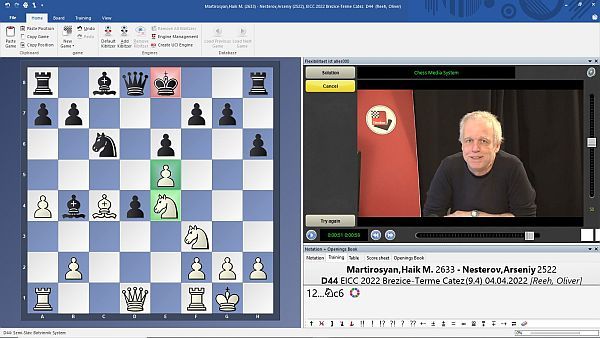 Oliver Reeh's tactics contribution consists of 34 games with many training questions. Solve his favourite combinations together with the International Master in the interactive video format!

"Endgame highlights from the FIDE World Championship 1997" and much more 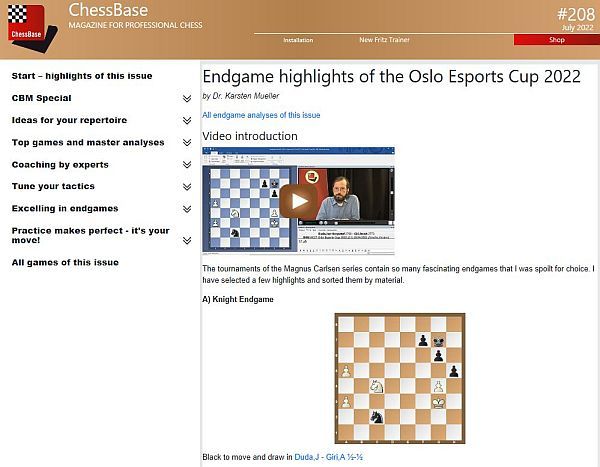 Karsten Mueller provides comprehensive training material for the highest demands. Not only on the World Championship tournament 25 years ago, but also on the Oslo Esports Cup 2022, the Hamburg endgame expert provides plenty of illustrative material and analyses (incl. video). 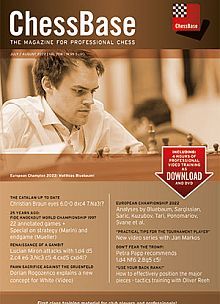